As the Oarlock Turns Part 2: No Turning Back

Patches of snow line the bouncy put-in road to Boundary Creek. The noses of wildflowers sniff the spring air through the remains of frozen prairie. We, too, fill our lungs with the aroma of the mountains. 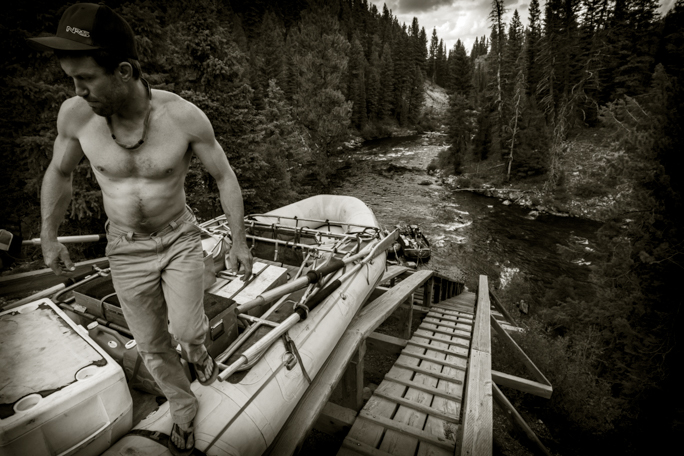 The line of private and commercial boaters at the ramp is short this time of the year. The water is high, and the weather often dismal—raining and snowing for days on end. Rafting this section of the river, running at over six feet on the gauge, is not your standard family outing (unless you grew up in my family). As I overheard one veteran guide, hardened by many high-water seasons, put it to a group of commercial guests years ago, “This river is a hostile environment, people! It is trying to KILL YOU! This is your last chance to turn back.” 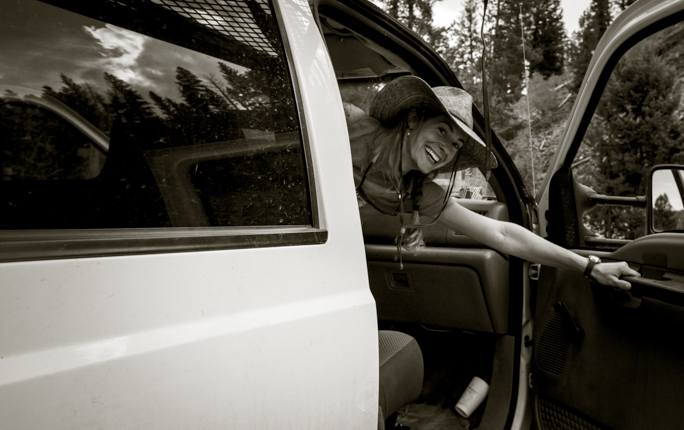 For God sakes, man! Even as a guide I wanted to turn back after that little speech. He was right, though, the river is not Disneyland by any means. Even so, I see license plates ranging from Oregon to West Virginia in the wooded USFS cul-de-sac at Boundary Creek, each car’s passengers eagerly lining up for an early-season ride down the Middle Fork. 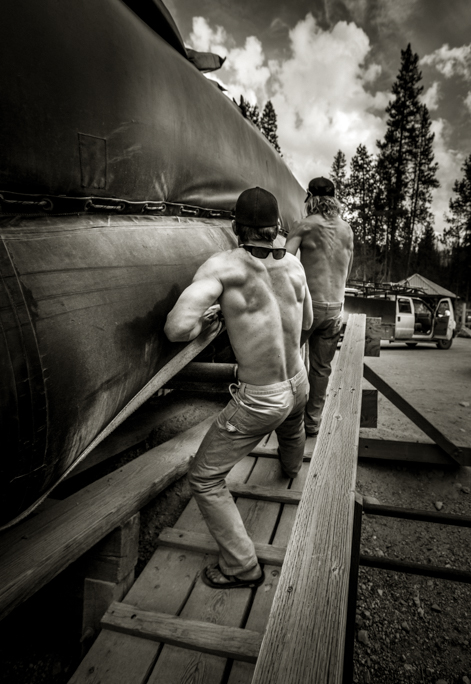 The guides fly from Clyde, the big Ford F-650, like honey bees—each on a mission, the boat ramp buzzing. Mike signs up for camps, mingling with the Forest Service rangers. Seth fires the generator. Jess fills water jugs and pumps boats. McCale turns up the music and dances while flinging gear sporadically, reminding us that there is always time to dance. Mark pulls oars from the truck and crowd-controls any surly boaters that might not care to finish rigging as quickly as us. After all, we’re in a hurry to get to Dagger Falls. The sun is setting, and watching the salmon leap up Dagger with our friends, shoulder to shoulder, is one of the gems of our season. Parker does what any gangly, pubescent 18-year-old swamper would do—admire the tone and strength of the female guide physique. He’s not the only one, though. Backing the trailer up, I manage to jackknife it twice. “No, you can’t try Parker! Do you even have your license?” Third time’s a charm. 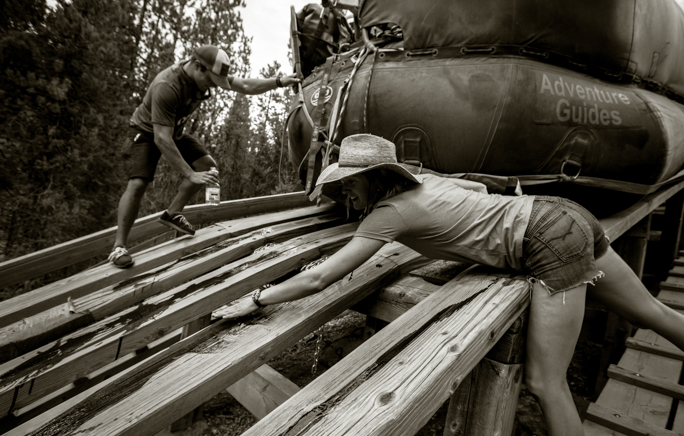 Shake the rust off. 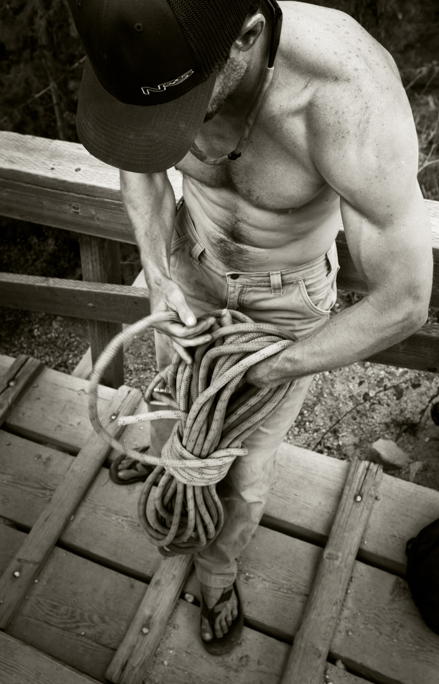 We fiddle with figure-eight knots, bowlines, carabineers and winches, committing our share of first-trip “whoopses.” When lowering a two-ton sweep boat, with 3½-foot diameter tubes, down 40 yards of steep-angled, freshly lacquered wooden ramp, it’s good to reduce the number of whoopses. Cross-loaded static ropes nearly take out the crew only once or twice.  Shake the rust off. We pause intermittently as more of our river-family compatriots from other parts of the Gem State roll in. We haven’t seen these people for over eight months, and it shows. Hugs and laughter. Private boaters bark at us. 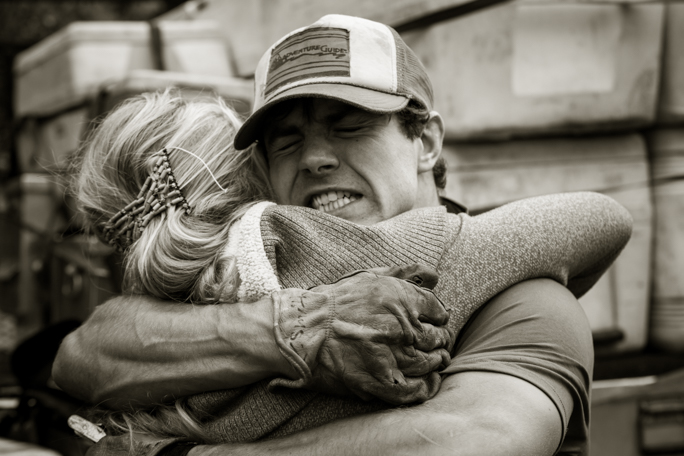 “The ramp is not for HUGGING!”

A collective opinion echoes from those embracing.  “No one tells us when to hug!” 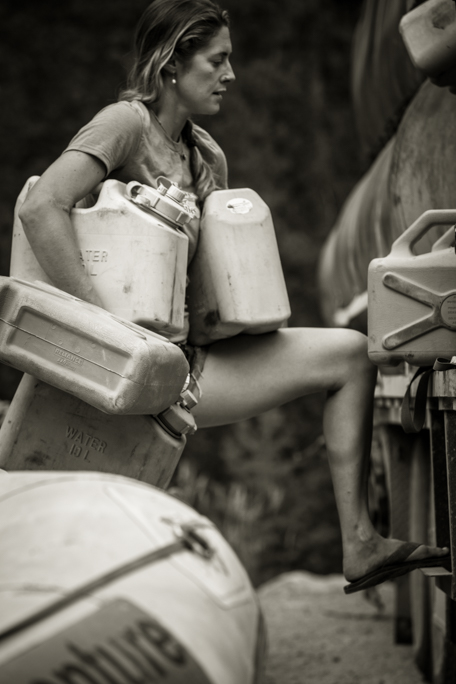 The classic private boater vs. commercial guide battle wages on. However, after less than four minutes of heated exchanges, both parties realize that they know someone who grew up with someone’s cousin who dated someone else’s sister in college who saved someone’s half brother’s life on the Grand Canyon who was somebody else’s best friend on this trip… The next thing you know, everyone’s pitching in to help carry gear down the ramp and exchanging tips for the whitewater adventure downstream—and, yes, there are hugs. 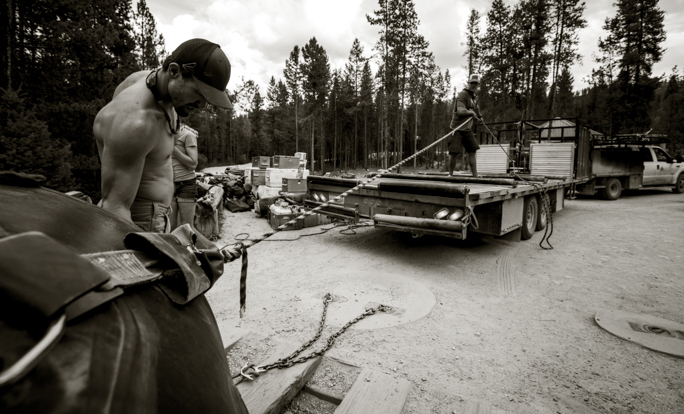 Freshly greased with 303, the inflated rafts—loaded with partially strapped down bags, pads, coolers, chairs, stoves, propane tanks and the like—break away down the newly lacquered wooden ramp, angled at 45-degrees downhill for maximum velocity. And that, if you don’t know my friends, is unreasonably fast. It seems an exciting roll of the dice every time we do it. Sometimes, an oar will dislodge and a guide will miss the eddy, but the risk of setting up a Z-drag to pull the boat back upstream is worth the hoots received from mission-control atop the ramp. 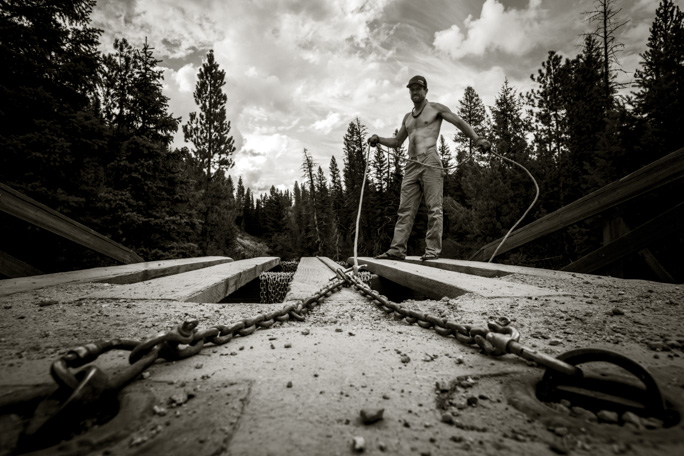 Webbing slides through my hands and trucker hitches roll off my fingers, yet another acute motor-skill deeply ingrained in my memory. The current beyond the eddy-fence tries to pull driftwood, flotsam and my raft downstream. Eight months have passed since I’ve picked up these heavy oars, carved from sturdy ash. I‘ve been stashed away in the mountains of Patagonia, trading one summer for another, chasing the warmth of long days and the power of big water. It feels good to be back home, though. Snowmelt off the peaks rapidly swells the river.  Nervous excitement courses through the crew as water levels rise overnight, along with the risk of flipping our fully loaded rafts. But muscle memory jogs as soon as my palms hit the handles. Our adventure-seeking guests have arrived. Now, if I can just keep the 12-year-old girls in my boat from swimming four miles of snowmelt through rocky rapids, everything will be okay. Shake the rust off. We push out of the eddy. There is no turning back now. 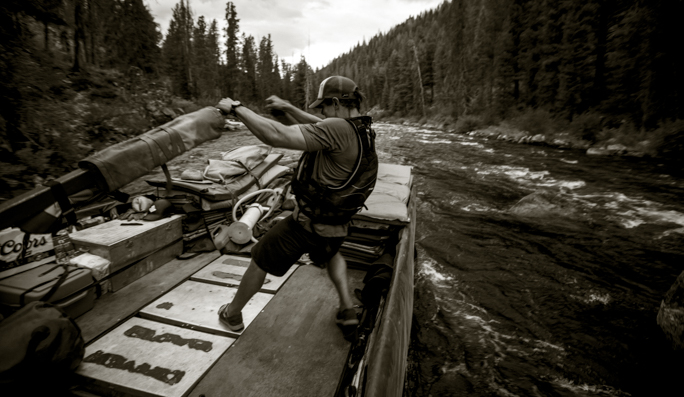