Join NRS ambassador Ginni Callahan as she throws her sea kayak on a sailboat and leaves Mexico for the great unknown. 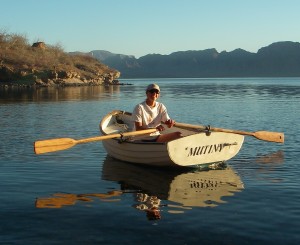 The most romantic moment of my life involved oars. Henrick motored his sailboat out of Puerto Escondido harbor and dropped anchor just off my beach near Loreto, Mexico. I stood with my little day pack and my computer bag and watched him row in to get me – this sweet, mysterious foreigner with a penchant for adventure, a love for the water, and a sailboat.

In this day of motor dinghies, he was rowing. For simplicity, he had no dinghy motor. It may be unique to a kayaker’s genetic coding, but I found this to be tremendously exciting. He was rowing.

I waded out to meet him and stepped into “Mutiny”. Henrick rowed us back to Misty, his sailboat. Our knees bumped in the little rowboat and we grinned awkwardly at each other. Once aboard, Henrick pulled the anchor, and off we went.

On that original voyage, we headed out sailing for three days. That’s all I had before I needed to return to Loreto and prep for a kayak trip. Henrick was headed across the Gulf of California to Guaymas to put his boat up on the hard and go to work as a welder in a Victoria, Canada shipyard.

The first rule of good comedy improvisation is to say yes to any suggestion. I’d rather see life as a comedy than a tragedy. That’s a good reason to be open to new ideas.

Now we cruise away from the same beach, headed on another open-ended journey. The South Pacific. Or wherever. I’ll return for kayak trips in March, 2013. Hitchhiking back won’t work this time, so I’ll get an airline ticket. But from where? The details will reveal themselves in time.

Ah, the romance of it!  Who would have ever thought, those years ago, that history would repeat itself so nicely. This time, two kayaks have their place on the deck along with Mutiny. Henrick and I sit together on the new aft platform that he built, and watch our wake stretch out behind us, the story of a journey. With luck, in a couple weeks, we’ll be taking our leave of Mexico.

This story will include the adventure of going places – remote and intriguing places that most people never get to see. It will also include adventures of going inside. Adventures of self-awareness and relationship. 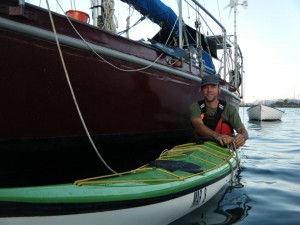 They’ve already begun. Believe it or not, I tend to resist new suggestions. This causes tension between us and within myself. So, I’ve been coaching myself in a different response: offer no resistance.

Step back, shut up, and watch the idea roll across the table. Don’t react. What do you know?

My contrariness doesn’t seem to develop. Instead I ask for more details about the idea in question, say what about it appeals to me, ask for more time to think about it, or even recognize its brilliance and grab that idea off the well-oiled cabin table and run with it. Figuratively, anyway. We’re still on a sailboat.

I’ve heard that the first rule of good comedy improvisation is to say yes to any suggestion. Since I’d rather see life as a comedy than a tragedy, and there is no rehearsal to life – it’s all improv – that’s another good reason to be open to new ideas.

Out cruising, new directions come quickly. A change of wind, or a leak, or engine trouble, is all it takes. “When she encounters a problem, she gives herself to it,” it says somewhere in the Tao. Other than the gender, this reminds me of Henrick, a master of working out the details of a problem or a project. I picture him folded barefoot like a hobbit in the engine compartment, unruly blonde hair falling across his face as the fine muscles of his forearms braid and flex to work the tools that will tame the beast.

Between the boatyard and our initial cruising, I’ve learned a lot about flexibility and releasing the internal resistance. As my brother-in-law, a former fighter pilot, says, “Flexibility is the key to greater air power!” If you change the focus a little you can say the same for sailing.

Back in March, after renovating almost every ounce of steel and wood in the entire 36’ boat over the last three years, Hendrick launched Misty. From Guaymas, Mexico, on the east side of the Gulf of California, the 30-hour overnight crossing to Loreto on the Baja Peninsula was our first shakedown cruise. I steered while Henrick saw to details of the rigging. Once we were out of the bay, the swell lifted and rocked the boat.

The sleek blue surf ski on deck noticed the calm seas too. It begged to play.

I guessed our speed by the passing bubbles. They moved slower than a normal kayaking pace. Two knots, I guessed. One point nine, said the GPS. We unfurled the genoa and Misty jumped ahead. Looking down, I guessed four knots, a good kayaking pace. Four point zero said the GPS. Yes! Our speed continued to climb, and we soon left my imaginary kayak far behind.

Little games fine tune the senses. Refine awareness. For fun. For survival. To see what other areas of life the awareness might affect.

Hold this course, said Henrick after we’d cleared the wide mouth of Guaymas Bay.  Two-one-zero, said the compass when I shone my headlamp on it. The star Canopus hung just to the left of the mast, and Sirius higher up to the right, on average, since the mast swayed through them both. Every ten minutes or so I checked the compass, and it was consistently within five degrees of our course. Yes again!

Maybe these are skills so specific as to be useless in other settings. Like recognizing the grit of sandpaper by its face, or the grit last used on a kayak repair by the texture of the repair. But there is satisfaction in it anyway.

At 6 a.m. a white gibbous moon hung oval in the west and an orange sunrise greeted my sleepy face. Flat horizon, only sea. Glorious sea! I tried on the view and decided I could take a lot more of it.

As the rainbow of dawn colors in the west gave way to sunlight, mountains appeared in the distance – the Sierra la Giganta behind Loreto, some 60 nautical miles ahead. My heart sank. Despite their beauty and distance, they marred a perfect horizon.

It’s funny the conflicting emotions that travel brings up. You want to go. You’re afraid to go. You can’t wait to get there. You’re reluctant to actually arrive.

Eighty-three nautical miles into a 128 nm crossing, the decreasing wind reached nothing at all. Mainsail and genoa stretched on their tippy toes with arms spread wide to catch any breath that wafted, and then harvested about a knot of speed from the air. Water barely rippled, so the fact that we moved at all attests to the marvel of engineering that is a sailboat. 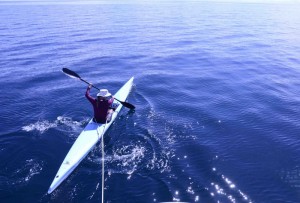 The sleek blue surf ski on deck noticed the calm seas too. It begged to play. Under full sail, we dropped the ski overboard and I hopped in over the railing.  I paddled in circles around the island of Misty. 45 miles away, the mile-high Giganta mountains scratched the sky, but the rest of the horizon lay flat and pure. Besides the mountains, only Misty, the surf ski and a few long-distance pelicans existed.

For fun, I connected a thick line from the bowsprit to my waist and attempted to tow the boat. I dug the curved wing paddle into the water and put the weight of my body behind it. The ski lifted with each stroke but flopped back down every time, tethered by the steel mass behind it. Henrick took a few photos, laughed and said something about catching a kayaker.

With Loreto behind us, we’re headed to a place called Honeymoon Cove on Danzante Island, 3 miles away. A forecast of north wind goads us into finding shelter. Tentatively, the voyage has begun. A faint gibbous moon rises over the beach in the daylight, too corny to be true.

Like most transitions, leaving can be bumpy. Even after two years of preparing business, partners, and family for my departure, it feels like there is much left undone.  Leaving it undone is like fingernails down the chalkboard of my Puritan work ethic, but I’ve done all I can and we’ve come up against deadlines for leaving if we want to catch the hurricane-free season. If we wait for everything to line up and feel “secure” we’ll never go.

A journey isn’t something you take; it’s something you give yourself to.  While it’s hard to let go, it’s time to give ourselves to some other pressing questions, like whether the Marquesas look like the pinnacles of Danzante, only green.  If the low Tuamotu Islands will remind me of the beach by Vista al Mar restaurant with its palm trees. What it will be like to spend three weeks at sea without sight of land. Whether that front hatch cover I resealed will leak again. What we will learn from a South Pacific culture that settled some of the world’s most remote islands by canoe and outrigger with paddles and sails. What this journey called life has in store. 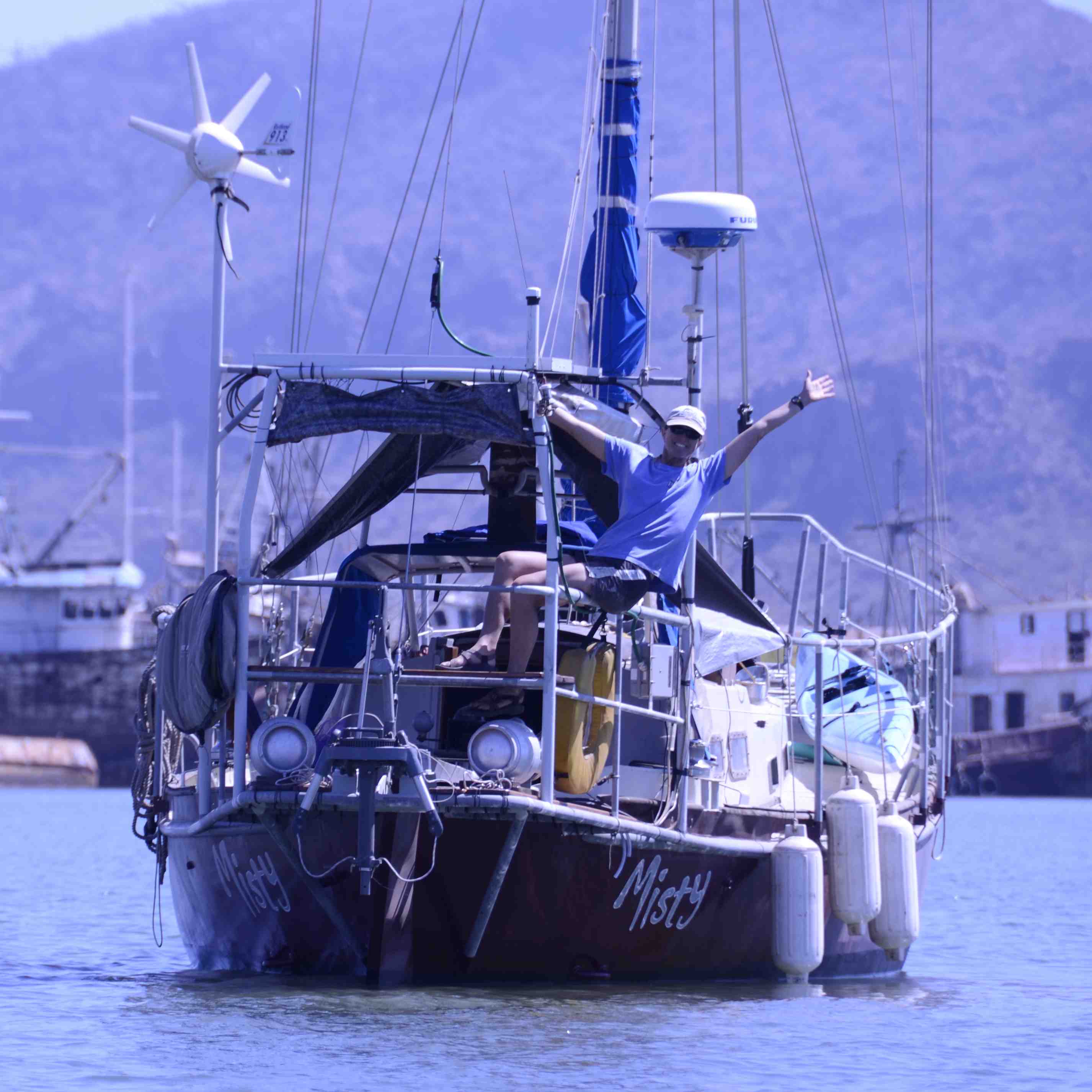