Fear and Dread on the Rio Sirupa

The monsoonal rain would not stop and the river kept rising. A feeling of dread was overtaking me. Cascada Sirupa loomed only a few miles downstream; how big would the waterfall be? We were on day-five of a seven-day first raft descent of the Rio Sirupa in northern Mexico. The rain had begun in earnest two days earlier. I had nightmare visions of the class V waterfall that lay ahead becoming enormous and un-runnable with all this rain. From studying the topographical map and Google Earth I knew the potentially deadly waterfall was on a right hand turn of the river. My imagination was beginning to get the better of me. What if once we turned a possible blind corner we could not escape the current and were pulled into the waterfall? What if there were no calm water eddies due to the rising river level? What if there were so many trees and strainers in the eddies that we could not pull over? After all, we’d seen more and more debris floating in the river over the last few days—tree limbs, logs of all sizes, even a whole tree. The Rio Sirupa was becoming a river in flood stage! 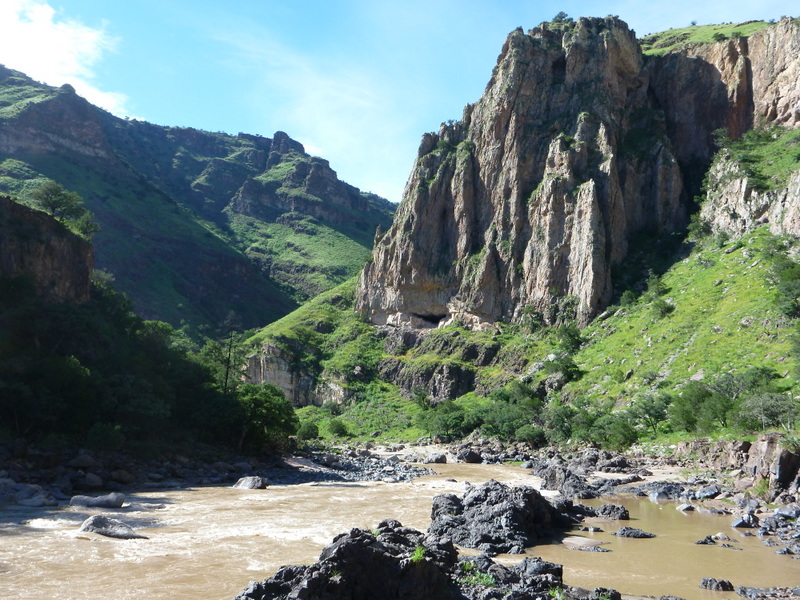 My uneasiness had begun on day-three when several powerful storm fronts chased away the blue skies. Suddenly we had extreme winds, lightening and thunderstorms racing through the canyon for much of the day. At one point a lightning strike snapped and sizzled just seconds away from us. We were experiencing a lightning storm while trying to find a safe place to pull off the river. We did the count one…two….whoa that was a close strike! Then a torrential downpour with more lightning so close we decided it best to pull off the river and crouch down on an insulating sleeping pad. This way if one of us was hit or a ground strike happened maybe the damage to our bodies would not be too severe. That evening the rain continued and the river rose significantly. 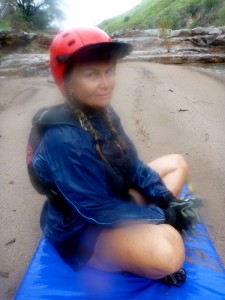 On day four the river had a very different feel. We were no longer dealing with low water, dodging rocks and finding the best route down small chutes, but were avoiding huge holes and giant waves. The river had developed the characteristics of something more akin to the Grand Canyon of the Colorado. High water feels to me like being on the ocean— a feeling of my boat swinging, swaying and rolling over big high water swells. As we continued to float downstream, the arroyos and creeks became muddy silt laden torrents tripling the volume of the river. When we came to one of the Sirupa’s largest tributaries, the Rio Riito, we discovered a raging black torrent of water turning that turned the Sirupa even darker.

In the early evening we began looking for a camp. Because of the high water, suitable landings were scarce. We finally found a spot that looked perfect, a beach with a bench 40 feet above. We stopped, investigated the bench, and decided to camp on the beach; if the river did not stop rising we could scurry up to the bench above. We made dinner; meanwhile, the river did not stop rising. Our beach camp was getting smaller and smaller! As we munched our dinner, repeatedly retying the boats higher and higher, we watched the current change from a slow steady pulse to a chocolate brown river-wide torrent. Debris had been floating alongside us all day, but as we watched from camp with astonished eyes we began to see larger tree limbs and logs swiftly being carried downstream. When I saw a full sized tree being swept away I new we could not sleep on this beach. We moved all our stuff up to the bench above and retied the boats ten feet above high water line.

I enjoy most rivers during high water, so I considered day-five as another fun day of high water boating. However, I realized that Cascada Sirupa at high flow would be a serious challenge. The plan for was for the two of us to get to it early so we would have all day to tackle the obstacle— portage, line boats, run big Class V drops, whatever was needed to have a safe run. But at camp that night my fears of a high-water swollen waterfall once again took over, and I went into a bit of a panic. I restudied the topo map in search of an escape route. There it was! The creek we were camped beside looked like it may go up to a road. It would only be a 1,300 foot climb in about 3 miles. I attempted to talk Neil (my husband and long-time boating partner) to help me hike our gear out to the road. Dang! I could not persuade him. He reminded me of the terrain we would be walking through: a swollen creek surrounded by thorny mesquite, cacti, sharp rocks, and possible small cliffs to surmount. He questioned whether we would really find a road, even if we did successfully negotiate the three miles of creek scrambling with all our expedition boats and gear. (Just because there’s a road on a Mexican topo map does not mean it really exists.) And if we did indeed find a road, would there be traffic or friendly locals to help us? He reassured me that we had been in similar tough situations before, so we could handle this Cascada Sirupa too. In reality, the prospect of walking out had more problems than if we just continued downriver. I knew he was right. The best plan was to keep going downstream, and once we reached the waterfall, we would decide on the safest plan of action.

In the morning, with the water still rising, the river was big, pushy, and moving fast. I anxiously loaded up my small, lightweight 13-foot cataraft with camping and personal gear and pretended to be brave, but in reality I was gripped. To stall for time, I rowed downriver very slowly, catching as many eddies as I could and taking the longer chicken routes whenever possible. My vision was obscured by fear; I could not see the beauty of the canyon or feel excited about attempting at the first raft descent of the Rio Sirupa with our catarafts. My brain keep cycling the same fears and posing the same frantic questions. What if the river was so high that there would be a river-wide horizon line? What if the current above the drop was so strong we would be yanked into deadly reversals and keeper holes? What if the eddies were full of trees?

As we floated on, we were quickly approaching the right-turn river bend before the waterfall. I could no longer take chicken routes or catch eddies because there were none. The water was rapidly picking up speed. Then the river took a turn to the right and suddenly there it was— my worst nightmare – a 6oo foot river wide horizon line! I had a split-second to pull with all my might to catch the micro eddy above the drop. We caught it and tied the boats to shore. Off we went for a scout. It took us an hour and a half to fully scout and scramble around on the steep-sided, thorny, vegetation-lined cliff of Cascada Sirupa. I despaired at the half-way point of the scout, where there was a very small cliff ledge, and suggested that maybe we should just camp there, high above the river, and wait out the flood. I knew that would not be practical because the water was still rising—what would it be like tomorrow at an even higher flow? Would it be better? Probably not. 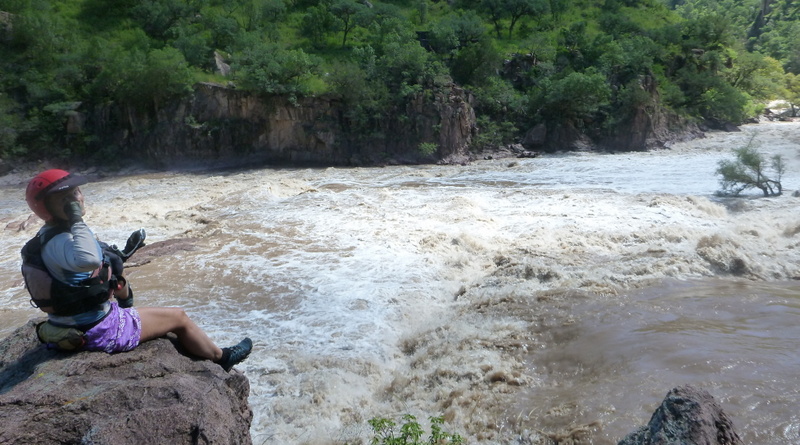 This was a serious rapid at this flow, and I could not see a safe route. What normally would have been a mean Class V drop on river right with easier passages to the left, or a relatively easy portage over the flat bedrock on the left, was now completely covered by water. The main Class V part of the rapid had three distinct drops over about a 400-foot span and then big water class IV rapids continued another 400 ft. With this high water the main drop on the right was Class VI (unrunnable) and the easier left passages were now raging torrents with serious reversals. The middle was no better; it contained small waterfalls (bedrock ledges) that folded onto each other, forming keeper holes at the bottom of the drop. It definitely looked like a portage—but how, with the cliffs on the left? Fortunately, Neil felt a far left run at the top drop would be feasible. I stayed below the initial drop to set safety with throw bags in case he ended up swimming. Luckily, as he scraped down the far left, a rocky shallow sneak route emerged that avoided the gnar in the middle. My fear-laden brain, not seeing accurately, had missed this option while we had scouted. What a relief that Neil did let emotions and fear overtake him too.

Whew! He made it down the left hand chute without a swim or rescue. After getting the boats through the first drop we scooted them over a bedrock ledge into a class IV side route and continued on to the lower class IV drops of Cascada Sirupa. I was so glad to have Cascada Sirupa behind us and looked forward to finishing our first raft descent of the Rio Sirupa, especially now that some of the mind-numbing fear was subsiding.