Redefining Good: How Moving the Goal Post Can Improve Your Paddling

Surviving Class V is not the same as running it with style and grace. Leland Davis shows how redefining “good” can help improve your paddling.

“Did you hear that Johnny Huckenballer ran Upper Killerdeath Falls?”

“Did you read that article about Steve Wilderman doing the first descent of the Inner Ohnodontgo Gorge?”

“Unbelievable! That dude’s next level!”

In the whitewater culture and media, these sorts of conversations often form the definition of what it means to be good at paddling. What rivers someone has run or what Class of rapids they frequent provide objective benchmarks that most of us gravitate to—especially early in our paddling careers when we don’t know how to choose more subjective criteria.

“Sue has been dropping YYY rapid every time, so she must be hard-core.”

This also provides an easy metric for judgment of what rivers are appropriate for us to attempt as we progress:

The truth is that many of us continue to think this way throughout our paddling careers, and we set our goals accordingly; but what if that’s actually a poor way to judge skill at paddling, or to select the next steps for progression? What if the ability to successfully survive to the bottom of a rapid or river tells us very little about our skills as paddlers? What if there’s something else we should be doing in order to become better at paddling rather than climbing the ladder [link to climbing the ladder article] of whitewater difficulty?

The hardest rapid that I ever ran was a set of waterfalls near Lake Placid in upstate New York called High Falls Gorge. As an up-and-coming young gnar paddler, it was my dream situation. It was the autumn after my first summer out west—my most varied and intense paddling season ever at the time. I had connected with some big-name pro paddlers a week earlier, and I rode with them to scout this gorge that nobody had ever run. After several hours of scouting, none of them wanted to attempt it. I decided to give it a try. 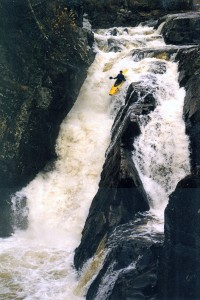 The first drop was a 45-footer. It had a ledge that stuck out about 15 feet down from the lip—which had to be cleared—and a fierce hole at the bottom. If you swam from the hole, there was a very real chance of being swept into an even worse hole in the next rapid. I vividly remember my plan: I would launch a huge boof to clear the ledge, reconnect with the face of the drop below, lean back and pencil into the hole, backender end-over-end, then quickly roll up and backpaddle away from the hole before it could suck me in. Reading this now, it sounds completely insane. It also seems obvious that I wasn’t truly ready to run that drop. In my defense, nobody outside of Oregon had even heard of the Oregon Tuck at that point, and running waterfalls of that height was still somewhat of a black art in the East. And to my credit, my run went exactly according to that crazy plan.

The second drop in the gorge was a horrible sloped ledge into a boxed-in hole with a boil more than a foot tall almost 10 feet past the drop, blocking the exit. Unsure of what line to choose, I ended up getting stuck and surfing between the backwash of the hole and the boil. Fortunately, a throw-rope was dropped from the overhanging wall above my head, and I was pulled over the boil to the next eddy.

The following two waterfalls went more smoothly, and I exited the gorge with one of my greatest whitewater fantasies completed. I had arrived with a group of top-level pros and gotten to take the lead on a huge first descent. However, my feeling of accomplishment was short-lived.

BJ Johnson ran it next, and he absolutely styled it. He launched over the ledge in the first drop, leaned forward and penciled into the hole, then surfaced upright and paddled calmly toward the next drop. He skittered over the boil at the horrible boxed-in hole, and finished the final two drops with style and grace. It was a textbook lesson of how that gorge should be run, and an unmistakable message to me that I had merely survived the gorge, and not really paddled it. I had a lot more to learn.

Fast forward less than 1 week—I was back at home on the Green in NC. In the take-out parking lot, another well-known pro paddler who I rarely interacted with made a point to come over and shake my hand.

I was a bit stunned. Word had traveled far and fast; and despite my knowledge that I had only survived High Falls Gorge, the word on the street was that I had done a big first descent. In the following months, all sorts of people began treating me a little differently—I was suddenly known as a really good paddler.

But I knew otherwise. Accomplishing what had been my ultimate paddling goal only served to illustrate how much more I had to learn. It was a major shift in my thinking—the point where I stopped using what rapids or rivers I had run as the primary metric for my skill. Doing that first descent had not proven I was the best paddler that day, only that I was the bravest (or most foolish). Desire—not skill—had gotten me through that gorge: my desire to run a big first descent, and my assumption that accomplishing that goal was the way to become good at paddling.

In many ways, desire defines how we each judge our own skill level at paddling. After all, how good you are depends on what goals you want to accomplish. It’s a subjective rating that is ultimately your own to determine.

When many people first start out, their goal is simply to learn what they need to so they can enjoy being on the water. They work different moves like eddy turns, peel outs, ferries, braces, and rolls—practicing the skills that will increase their fun quotient. This is a golden time in paddling, before most people know which way they want to go with it. It usually takes place on easier rivers, and without much thought to long-term goals. It could go on for months, or it may only last a day or two.

For many paddlers, there comes a point when their goal changes from gaining skills to trying to advance to a particular river or Class of rapids. Perhaps it’s because the people who are teaching them are bored with the beginner stretches and are pushing their students to go some place more fun for themselves, or perhaps it’s the allure of the runs where most of the social scene is paddling. Maybe there’s a dam release run or a bigger river with a longer season that they want to work their way up to in order to allow for more paddling days, or maybe getting “good enough” to paddle the quality run right near their house is the objective. Whatever the reason, a subtle shift occurs in what they desire: the skills themselves are no longer the goal.

During this phase, the paddling progression can end up looking more like the quest for a college degree than an athletic endeavor. Rather than trying to gain any particular knowledge along the way, many will simply complete each required course in the specified order so that they can move on to the next level. In paddling, much like college, how you go about it depends upon your goals. If your desired end result is simply to reach a particular river or Class of whitewater, you might purchase the best technology to help you advance quickly (a very forgiving creekboat—ie. the creeking Cliff’s Notes) and settle for only a “C” grade in Class III before you move on to Class IV. After all, you passed. Many times this involves repetition of your pre-requisite rivers and memorization of each move until you can successfully complete them all, clean the run, and move on to the next level. This is the undergraduate stage of boating, and a proven way to progress through the early stages. You can certainly attain the goal of Class V that way; but does successfully running that Class V mean you’re a good paddler?

That depends as well. Whether you get C’s or straight A’s in your college coursework, you come out with the same degree. In paddling, whether you take the fastest route to Class V or build every possible skill along the way, you will still probably be able to make it down your target river(s). If you use the metric of which rivers and what Class of whitewater you run to determine skill level, then maybe you’re as good at paddling as you need to be.

The problem comes when you want to move on to some graduate work or a larger career. There’s nothing like leaving your comfortable environment and stepping out into the big real world to illustrate what you don’t know. In paddling, this happens when you leave your home rivers and venture to new rivers, new regions, or new types of whitewater. All of the moves that you’ve memorized won’t help you much here. You can’t just reproduce the answers now—you’re going to have to show your work. This is where it starts to make a difference whether you tried for C’s or straight A’s in undergrad.

If you’ve spent your time focused on moving up the ladder of river ratings instead of building a broad foundation of skills, you might find that although you’ve been making it down low-volume Class V creeks around home for years, you are only a Class III paddler in big, pushy water or on unfamiliar rivers. The same goes for switching from big-water in your home area to more technical water, or from drop/pool to continuous rapids, etc.

So what can you do to get those A grades along the way and best prepare yourself for a broad and adventurous paddling career? Here are some tips for getting the most out of every step on the paddling progression ladder:

Whitewater is a wonderfully complex and thrilling environment, and also a very physically intense one. It requires a broad range of problem-solving skills and physical abilities, as well as judgment and nerve. The effort that you put into mastering paddling correlates directly to the benefits that you’ll receive. Think about your goals. If your aim is to get to a specific river so that you can get outside and enjoy it, progressing up the ratings ladder could well work for you. However, if you’re looking to explore a wider range of rivers, or for greater growth as an athlete, there are better ways to build your readiness and skills. The most important thing you can do in order to get the most from your whitewater experience is to keep trying to improve, instead of simply striving to make it to the take-out.