Guide Reflections on the Owyhee

Their job may be your vacation, but being a guide isn’t just charging whitewater and presenting five-star Dutch oven entrees. After a dreary trip on the Owyhee, Andy Hinton reflects on the challenges faced, and accepted, by river guides.

Despite having spent the last two hours in relentless wind, driving rain, and periodic hail, my crew and I have continued to talk, joke, and sing. But the cold and clouds and wet are wearing at everyone’s smiles. With each strong gust, people draw up within their clothes, within their very body, as if they could crawl deep inside their selves, as if skin and flesh and hair are puffy quilts, and they might take shelter within these layers as a child beneath covers. 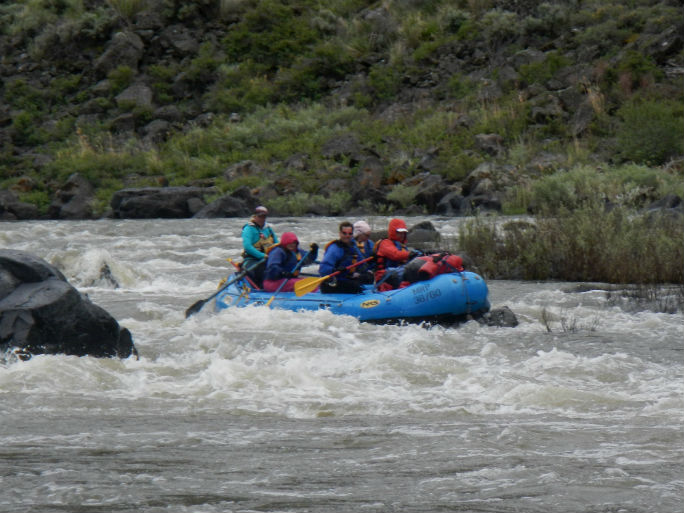 On either side of us, the Owyhee Canyonlands rise in blocky monoliths of cliff and cave and talus slope. But the hues are off kilter. The rhyolite rock of former lava flows is darker and richer in tones than the browns and tans of a typical desert landscape. And every terrace and incline less than vertical is draped in green grass and accented with wildflowers.

Under better conditions, my guests wouldn’t be paddling through this part of the river; rather I would be letting them enjoy the scenery while I pushed on to our next camp. But since the head wind is stronger than the current, I’ve turned the raft backwards, so I can pull on the oars mounted on my stern rig while my five guests have spun around in their seats and are paddling forward. It’s all we can do to maintain downstream momentum. 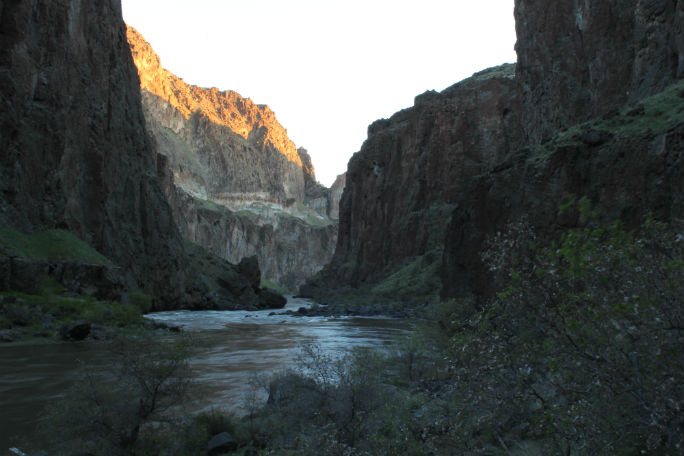 It’s starting to rain again. And I begin to wonder if it would be warmer if the precipitation turned to snow. But just as the group’s resolve begins to wane, we round a corner and camp comes into view. Our gear boaters broke ahead earlier in the day in order to get most of the supplies unloaded and organized before the trip arrived. The guests grab their drybags and head toward the tents set up along the high bench. To say the tents are standing would be a misrepresentation, for the large dome structures are anything but static. Rather they sway back and forth, dancing in the wind to the point of almost collapsing.

The other guides and myself don’t discuss a plan, or even change into dry clothes; we fall into doing what needs to be done to make the situation tolerable, or at least seem better than it is. A pot of water goes on the blaster. A group tarp is erected and the fire pan and chairs placed underneath. Extra guy lines are secured to the rain flies; piles of rocks replace failing tent pegs.

And as the guests change into dry clothes, wrap themselves in sleeping bags, and wonder what the hell they were thinking when they booked this trip, familiar voices begin wandering from tent to tent with a thermos of hot water, mugs, and various accompaniments in hand. “Would you like some hot tea? Coco? How about a shot of Jim Beam in that? How about just a shot of Jim Beam?” 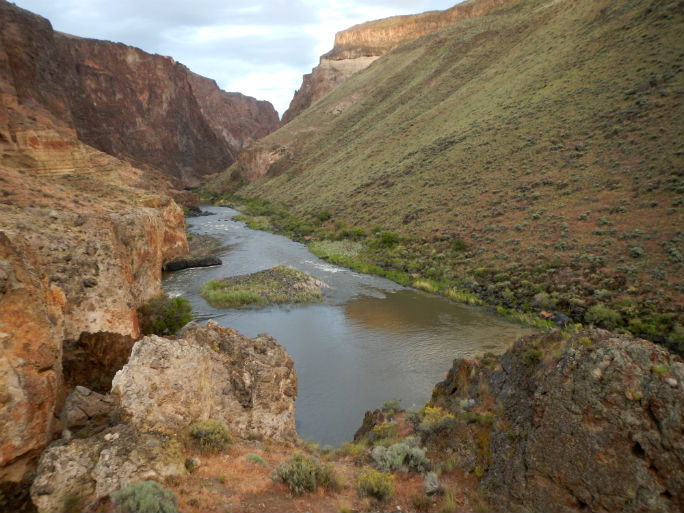 We’ve all suffered days during a trip, or even endured entire trips, with less than ideal conditions. Trips where the water is so low you spend as much time pulling boats off rocks than you do paddling downstream. Trips where the mosquitoes are so tenacious you’re forced to eat dinner in your tent. Trips where the weather is so cold you have to piss on the bowlines to untie the frozen knots.

Dealing with these conditions aren’t always fun, even for the most seasoned outdoors person. Those trips can be even more of a challenge when there are others in the group who are less experienced, people who look to us not only for safety, guidance and entertainment but also to ensure their mental well being.

Anyone who has ever had to work within a group dynamic knows that attitudes are more contagious than the most virulent cold. A bad disposition can bring down other participants; even those who might otherwise be having a good time. This is why the most essential skill for an outdoor leader is not only proper preparation for what you might encounter, but also having a proper attitude for dealing with any condition. 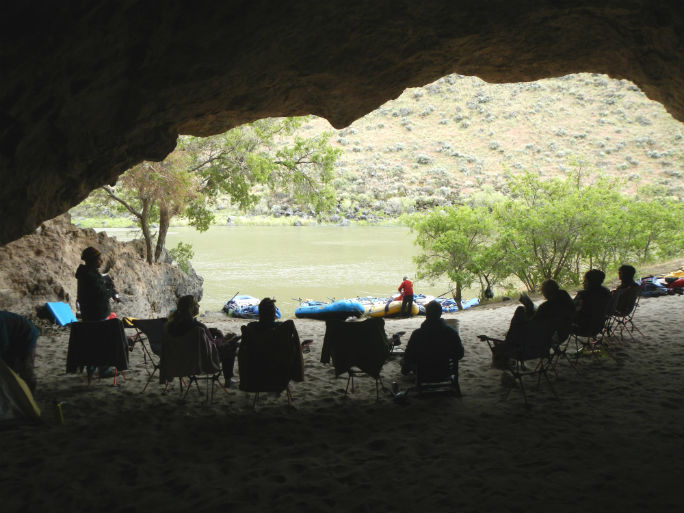 Bundled bodies begin to emerge from the tents and gather around the fire pan. Some even venture up the trail to the hot springs. More water is heated and drinks are passed around. Stories are shared. By the time dinner is served, the wind and drizzle have stopped. And when it’s time for bed, the temperature is warmer than it was mid afternoon.

As a guide, maintaining a good attitude, despite our own internal battles, is vital. It gives the group the motivation to keep moving forward, to make the situation better, and/or to tough it out until better conditions ensue. But the mental challenge of keeping a good attitude can be more strenuous than the physical challenge of the activity. There have been days after a tough trip where I just wanted to collapse in a meditative silence, cuss, cry, or scream at the world. And there have been times when I’ve done all of these (in private), then put on a smile and rejoined the group.

The next morning we launch under another cold gray sky. But we don’t let it dissuade us from pulling over for a side hike to Lambert’s Dome, a multilayer mound consisting of light colored, chalky lake sediment, interspersed with dark volcanic rock. It’s one of the most distinguishable features of the Lower Owyhee. We walk up a wash, looking upon eroded pedestals more fitting for an alien planet than an eastern Oregon landscape. 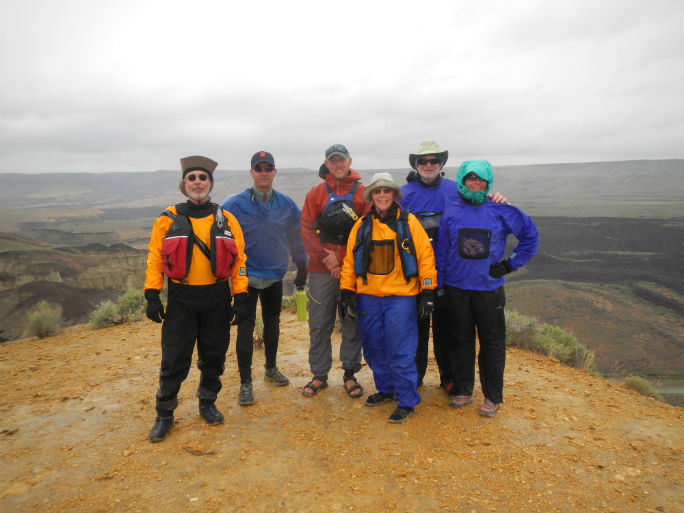 Then we ascend a steep, exposed scree slope to peer at the Owyhee’s turbulent geologic history. Great expanses of desert prairie are bisected and covered with ancient lava, forming dams that impede, alter and corral the river as it carries water toward the Snake River watershed. It’s an impressive view, but one that few people get to appreciate. The best way to access this point is by river, and the only time the Owyhee has consistent water is in the spring and early summer. And the only thing consistent about the weather during an Owyhee spring is that if you are out in it for a week, you are going to experience some cold, some wet, and some wind, and usually all three at once.

In the commercial rafting industry, we pride ourselves on making a wilderness adventure as smooth and luxurious as possible, enabling people who never go camping to go out on an extended trip and love it. We strive to accommodate the novice, while still managing to impress the experienced outdoor person. But one of the key parts of wilderness is that it’s wild, meaning there are variables we can’t control, environments that will never be tamed. And one of the defining aspects of an adventure is adversity, which means there will be some ordeal that makes the trip more than just a vacation. Being able to excel in these conditions and anticipate these challenges are integral parts of the journey. This is what it means to be a guide. 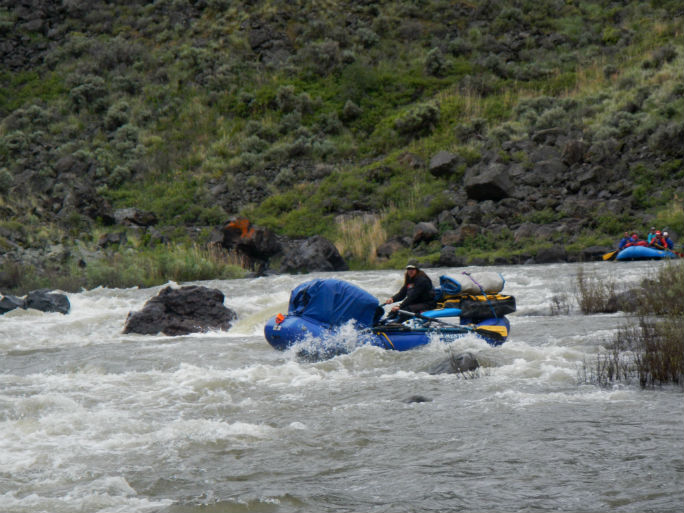 There are many ways we can keep spirits high within the group. It can be as simple as offering words of encouragement when frustrations begin to rise. Or it’s giving specific directives to people who no longer have the will or the mental capacity to accomplish elementary tasks. Sometimes by just maintaining a smile and continuing to have fun during tough times, we can take ownership of a bad situation and get others to accept this reality as their own. It’s the outdoor leadership version of Tom Sawyer’s white washing a fence. Other times the best you can do is just laugh at the absurdity of the conditions and hope others will laugh with you.

Over the next few days we continue to encounter a wide range of weather, but the brief periods of cold and rain we do experience toward the end of the trip are mild in comparison to what we’ve already endured. And when the weather does turn for the worst, we greet it with a sense of familiarity and humor and an awareness that things will get better.

At our last night at camp, we sit in our chairs, watching the setting sun cast it’s warm hues on the cliffs and spires across the river. Out of nowhere, a sudden gust rips through camp, sending everyone scrambling to collect gear and rescue a tarp that sails off with kite-like abandon. But rather than be perturbed by the intrusion, we just laugh and answer the wind with our own battle cry, “Owyheeeeee.”