St. Patty’s Day: Made from a Dutch

Dutch Oven cooking can be intimidating and mysterious, even a little mathematical, and potentially dangerous. But once you get over some of the basic misconceptions, it’s fairly straightforward and super rewarding. The most common dutch cooking that I’ve done are “box mix” desserts—brownies, the famous “big cookie,” pineapple upside down cakes, etc. I’ve also made quite a few casseroles—lasagna, enchiladas, baked ziti, green chili casserole. I’ve been keen to make from-scratch cinnamon buns, but I don’t love super sweet breakfasts (call me a freak).

For this St. Patrick’s Day feast we went to the river and splurged on a big béile for just a few friends, making lots of leftovers. Two dishes jumped into mind immediately: Irish Soda Bread and Shepard’s Pie. They’re both easily modifiable recipes with ingredients that are usually on hand and easy to pack on a multi-day river trip, yet delicious enough to make for all your foodie friends from back in the city. 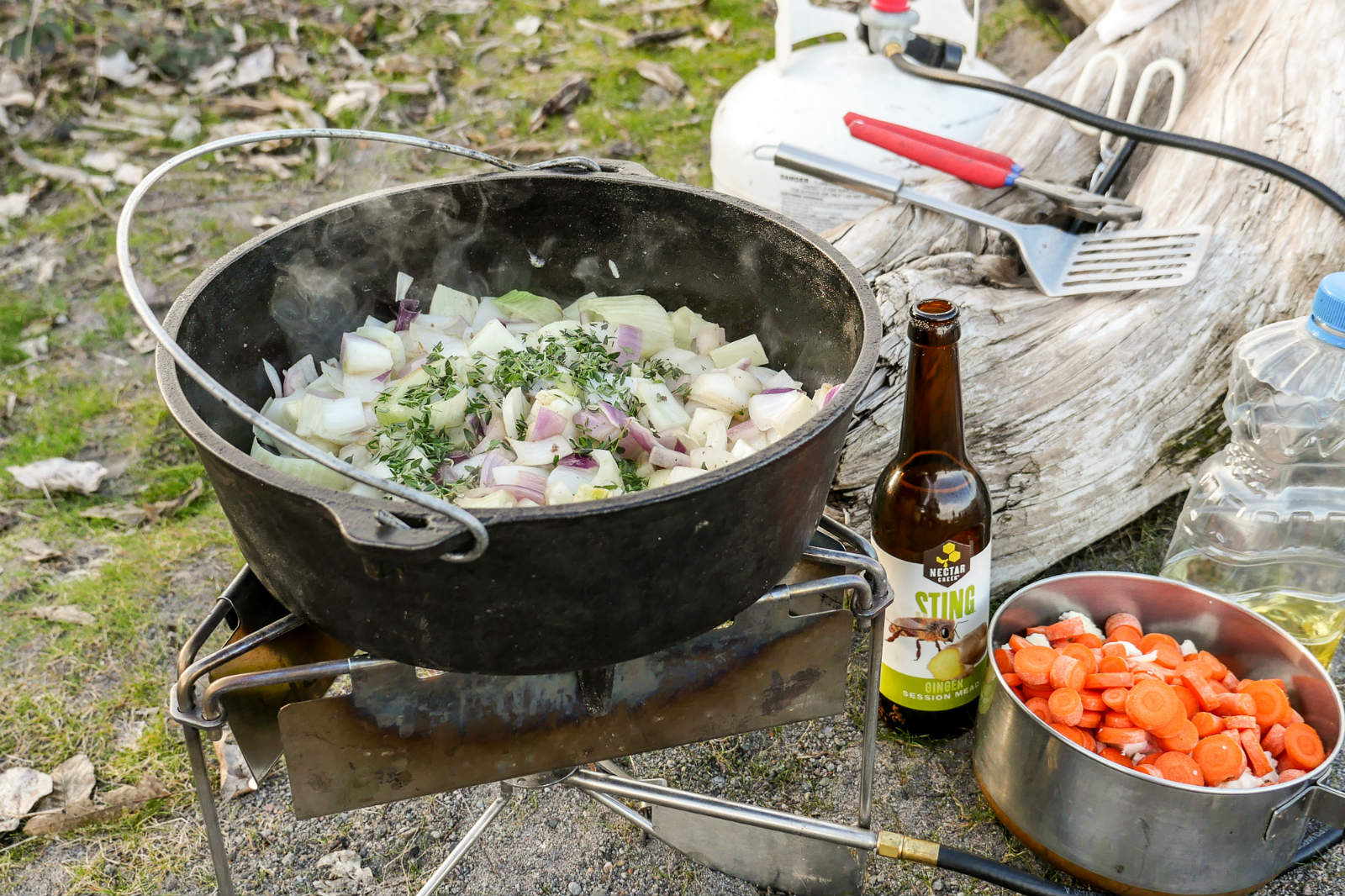 Choosing a Dutch Oven
For outdoor cooking with a dutch oven there are important features that differ from what you’d need for your kitchen or backyard grilling. Because we’ll be cooking with charcoal above and below the dutch, you’re going to need a dutch oven with legs on the bottom and a lip on the lid. You can get away with buying one with no legs by using small rocks or crushed aluminum cans. However, it’s difficult to make an alternative lip for the lid. (If you have any suggestions for an improvised lip, let us know in the comments.) I’ve considered using just the ring portion of a two-piece cake pan, but haven’t tried anything yet for our lipless dutch oven.

Iron or Aluminum? You can buy either a traditional cast iron or a cast aluminum dutch oven in a variety of sizes. Iron is known for the even distribution of temperatures and gets a great patina or “seasoning” on the cooking surfaces. The main advantage of aluminum is the decreased weight—and they can certainly be great long-term outdoor chef tools. Partner Steel even makes a square dutch oven with the advantages of better nesting with less wasted space.

There are lots of resources on taking care of your cast ironware, so we won’t go into depth here. Just remember to keep soap away from the cookware, and lightly oil all cooking surfaces (including the bottom of the lid) after each use and cleaning. 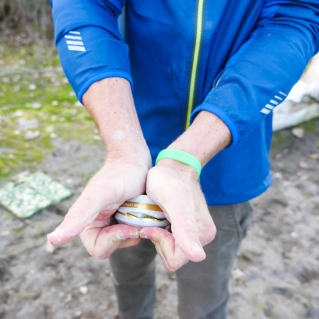 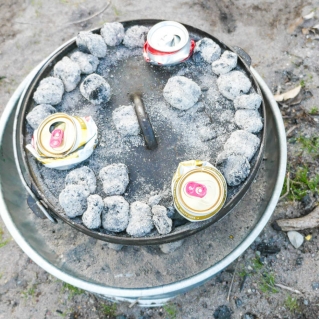 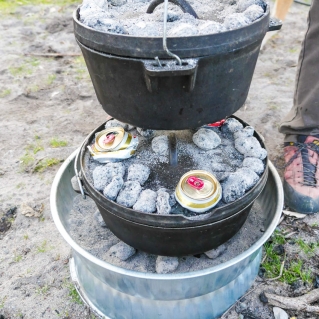 Choosing the Charcoal
Don’t skimp on the good stuff. I really like using the name brand coals because they deliver a consistent burn time and temperature for all the briquettes. Off-brand coals have the tendency to quit on you right during a delicate cake bake. (Blame Murphy but either way, no bueno.) Heat more coals than you need by about 30% and be sure to have a secondary station to place the burning coals that you aren’t using on the dutch. Some people use math to figure out exactly how many coals to use. If that works for you, go for it. I like to have an extra reserve in case I need to increase my heat for one dish and reduce the heat for others. Make a pyramid of coals, soak with fluid, wait a few minutes for the fluid to soak in then use a lighter to get the coals lit. When making a cake or other desert, do this as soon as you start mixing the batter, at the beginning of dinner preparation. 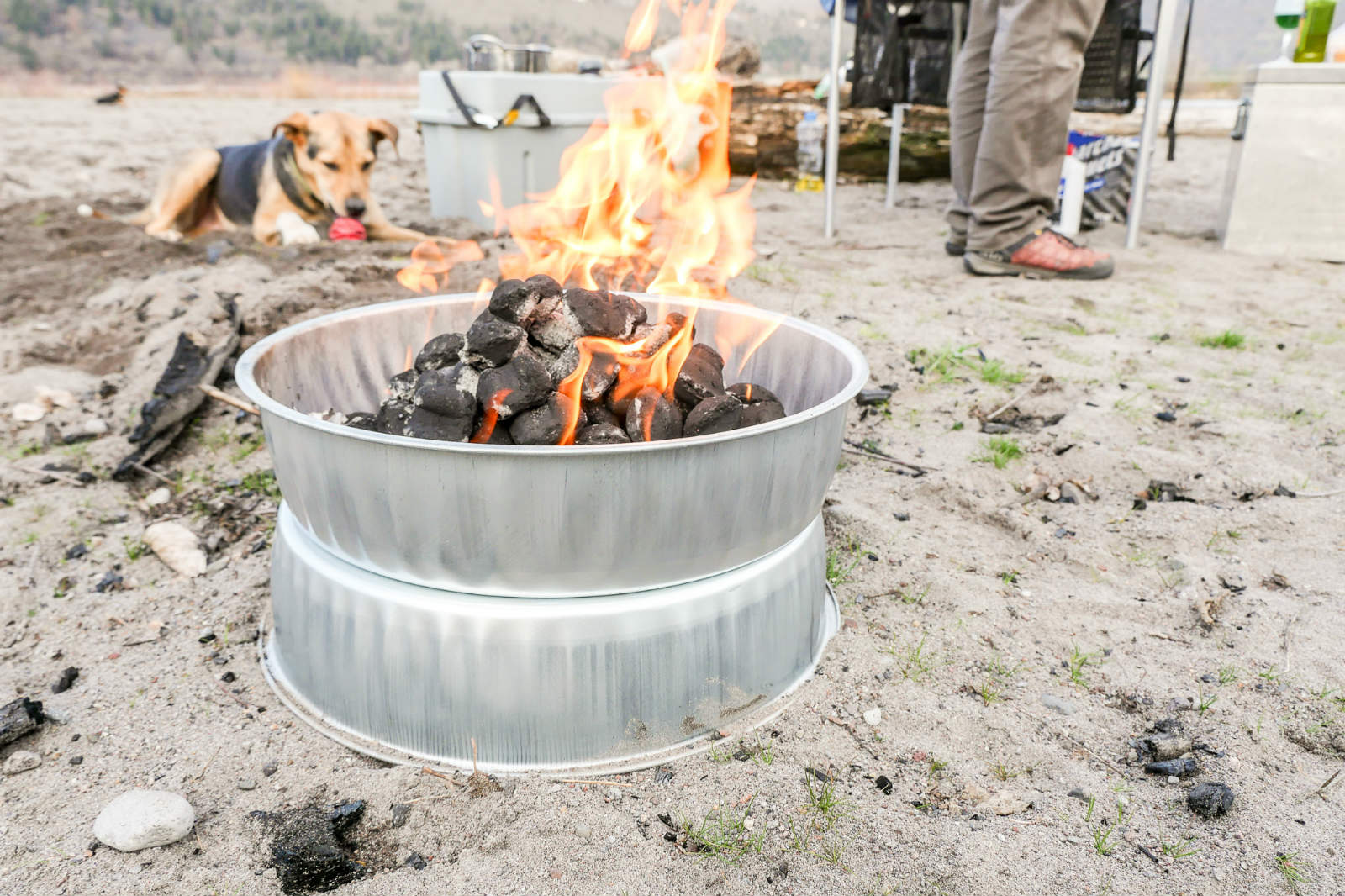 Terms and Tools
Full Ring – an entire ring of briquettes at the lip of the lid, tight and touching.
(minus #) – full ring minus a number of briquettes, with the remaining evenly spaced.
Domino Ring – an entire ring of briquettes stacked up and leaning against each other.
Spin the lid – rotate the lid by 180 degrees to more evenly distribute the heat. You may need to do this if you have a directional breeze.
Hotmitts – Don’t burn yourself. Hottmitts also make it easier to finesse the coals when you don’t have to hurry with your placement. Be comfortable.
Tongs – Get some sturdy long handled tongs that can take the heat. Mark them for your dedicated coal handling tongs. Sometimes the burning coals can mar the tongs and it’s nice to keep them separate from your salad serving tongs. (Disclaimer: We recommend not using the type in our photos! They are too short.)
Channel Locks – INDISPENSABLE! Get a good 12” set of these pliers and keep in your camp kitchen. A good set of channel locks also open cans of condensed milk for morning coffee nicely.
Raised fire pan with lip – Buy two galvanized steel oil changing pans for about 10 bucks each. Use one upside down as a stand for the top, upright one. Keeps the sand or grass from getting toasted. Even if you already have a great fire pan for grilling, these are a great addition to a stack of dutch ovens. If you’re in the market for a burly fire pan, I recommend the NRS fire pan. It’ll last forever. 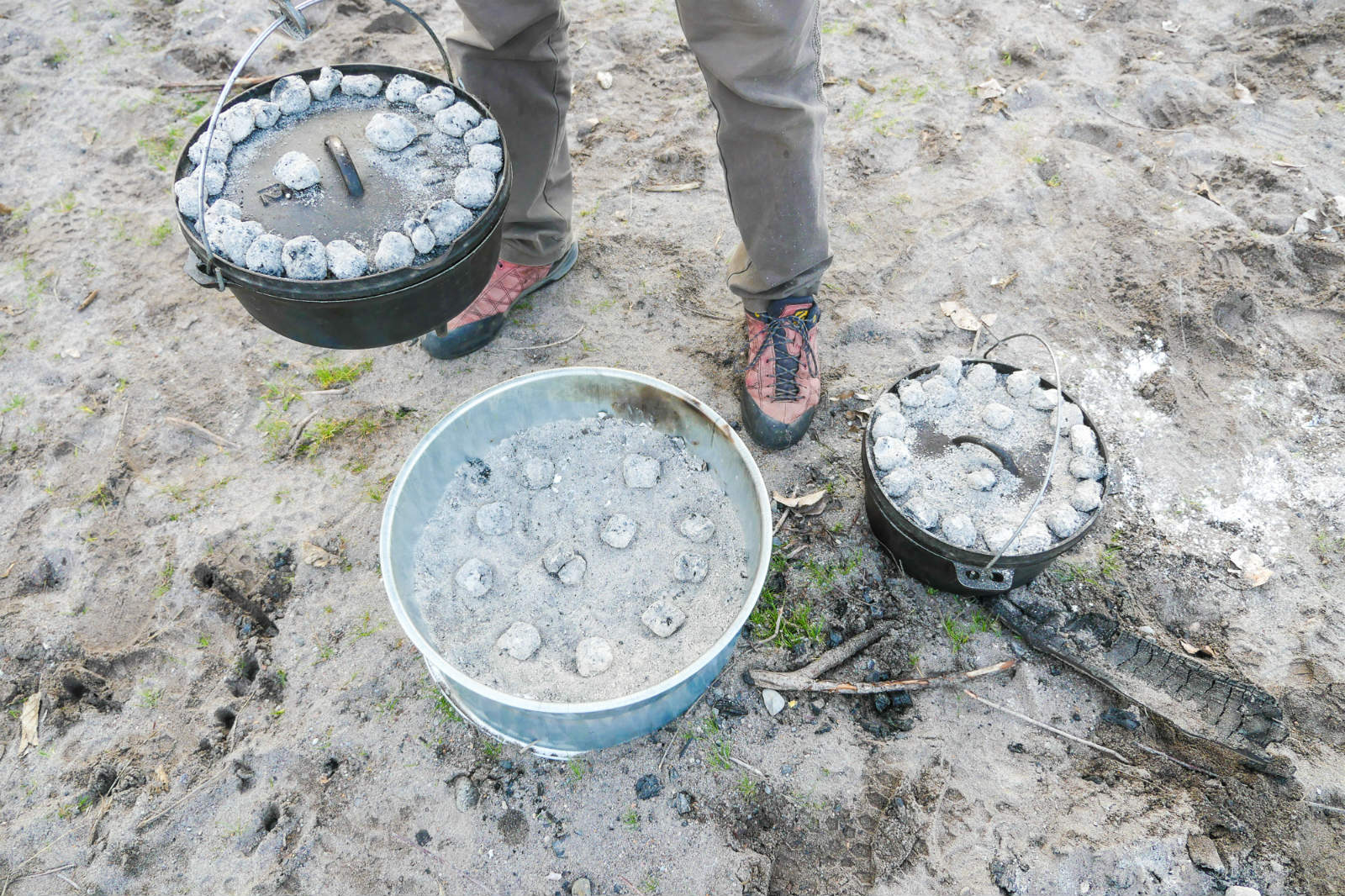 Green Beer, Green Brownies, and Cole Slaw
What better way to get into the Irish spirit than by coloring your beer green? We put just one drop of green food coloring into a 12 ounce can of Rainier, and the beer was very green. If I had to guess, it would only take two drops of food coloring per pitcher of any pilsner.

For our brownies, we used one box of Betty Crocker brownie mix, and one 16 ounce tub of white frosting mixed with three drops of food coloring. We didn’t modify the recipe at all, but we cooked it in a greased 10” dutch oven with 6 coals on the bottom and a full ring + 2 coals on the top. Go by the recommended timing on the box, but also, get used to using your nose to notice the first whiffs of baked dessert goodness. Usually, you can count on the brownies being done shortly after the first strong whiff of chocolate.

Our Cole Slaw is a simple ½ cabbage, 2 grated carrots and ½ cup raisin affair, with dressing consisting of 2 tablespoons mayonnaise, 1 tablespoon olive oil, and 2 tablespoons apple cider vinegar with salt and pepper to taste. 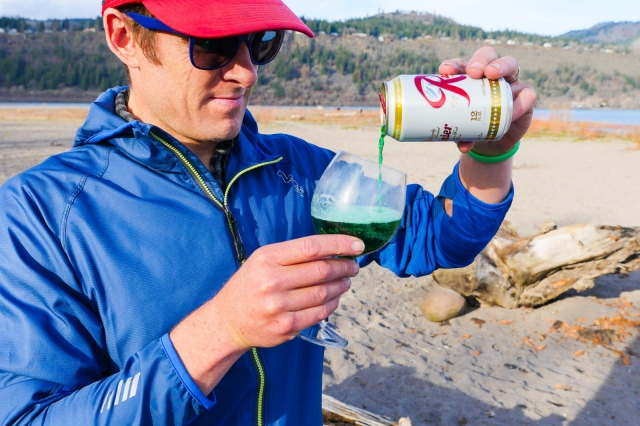 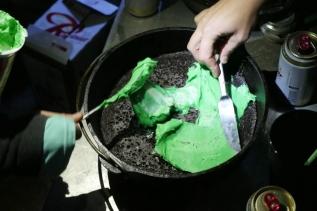 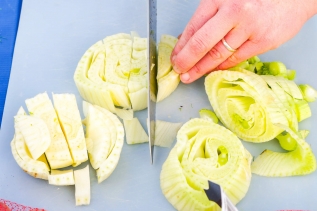 Shepard’s Pie
In its simplest form, Shepherd’s Pie is sautéed ground meat, vegetables, gravy or brown sauce, topped with mashed potatoes and cheese. Traditionally, Shepherd’s Pie is made with lamb, goat or other sheep meat. Cottage Pie is the proper name for that which is made from beef. I’ve heard the name Shepherdless Pie for the vegetarian variation. In fact, Jamie Oliver has a great recipe for Shepherd’s Pie with lentils and sweet potatoes. In our version, we used equal parts ground lamb and beef. Usually, the recipe calls for Worcestershire sauce; we opted for a combination of soy sauce and apple cider vinegar. 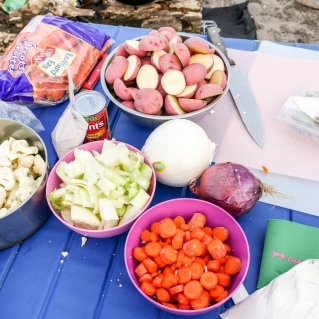 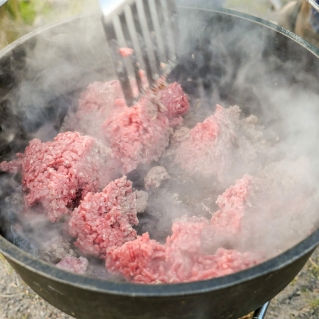 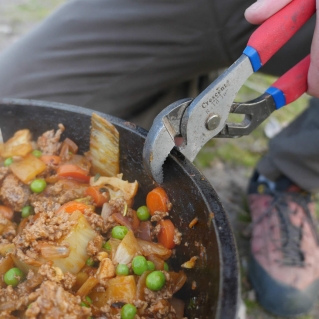 Cooking with dutch ovens requires good timing with your prep, so that the coals are ready when you need them, and the meal can finish cooking for all your hungry river friends. Don’t light the coals until all of the food has been prepped and you’ve started to cook.

Boil the potatoes until they’re almost soft and slightly undercooked. While the potatoes boil, brown the meat by itself in the dutch oven until done. Scoop out, set aside and discard the liquid. Add the stick of butter, sour cream, salt and pepper to the potatoes. Mash until slightly chunky and set aside. Sauté the onions, carrots, thyme and rosemary for 3 minutes stirring frequently, add the fennel and cauliflower, cook until mostly done. Add cooked meat, thawed peas, tomato paste, salt, pepper, apple cider vinegar and soy sauce. Stir until everything is well coated. Remove from stove. Spread the mashed potatoes over the top of the meat and veggie mixture, top potatoes with cheese. You might need to press everything down just a little for the lid to fit nicely. Any cheese touching the lid will fry, which isn’t that big of a deal. Cook with 7 or 8 coals on the bottom, a full ring of coals on the top, and a few around the lid handle. Bake 30-40 minutes. 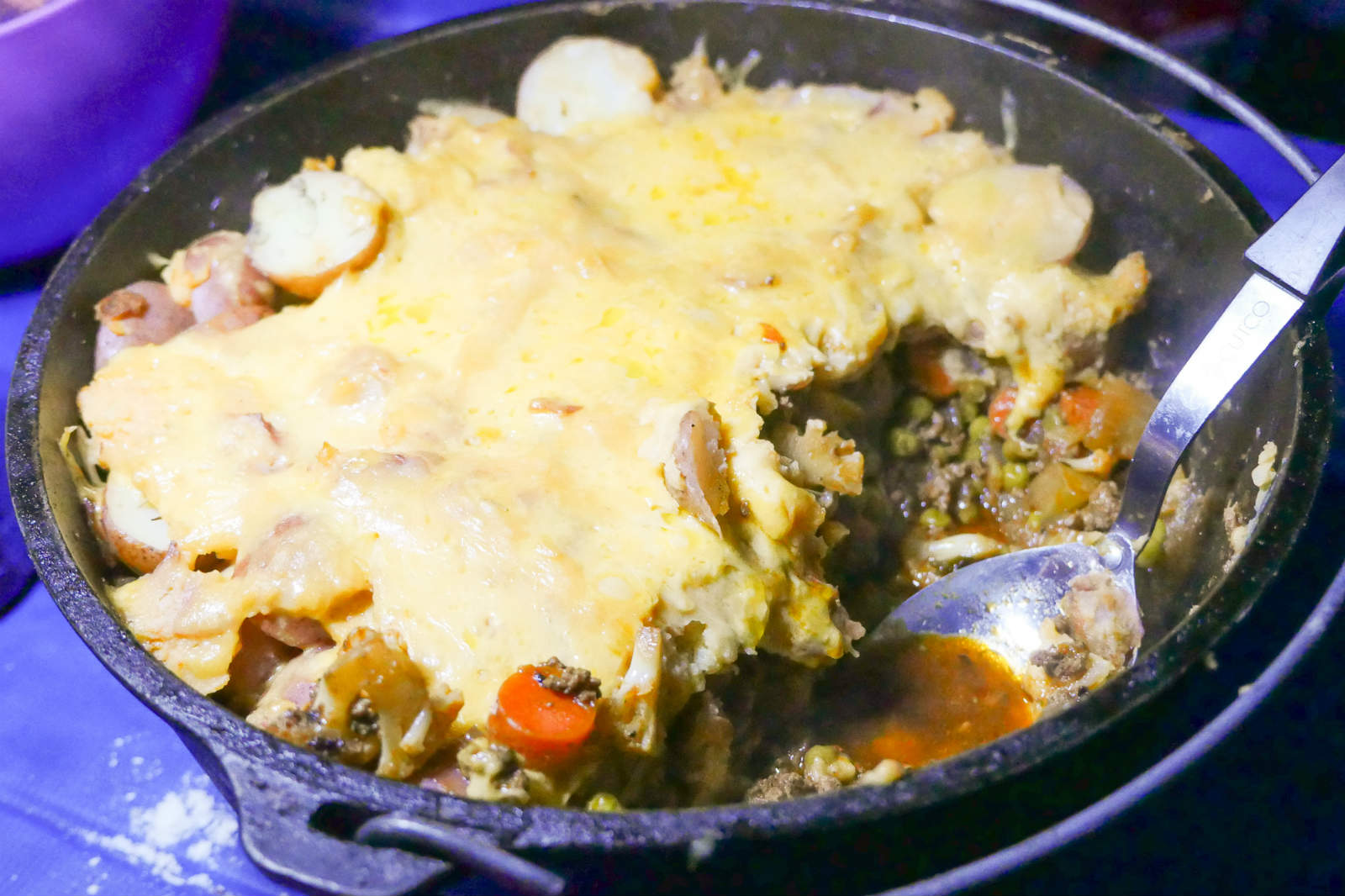 Irish Soda Bread
This is a quintessential quick bread is both sweet and savory, great for breakfast, lunch or dinner. It doesn’t rely on any yeast to rise and yet fluffs nicely due to the chemical reaction between the baking soda base and buttermilk (or alternative) acid. This was the first time making soda bread in a dutch oven for us and we were a little apprehensive. It turned out to be easier and tastier than expected. This is a repeat meal addition for sure! 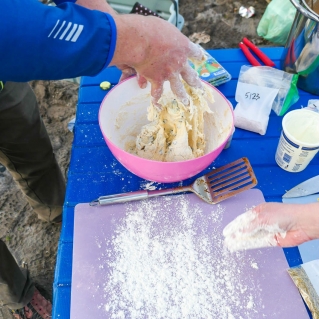 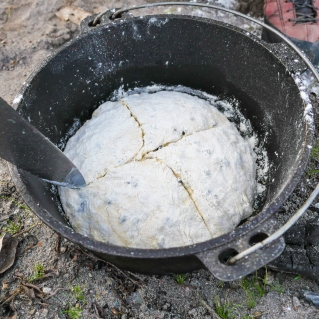 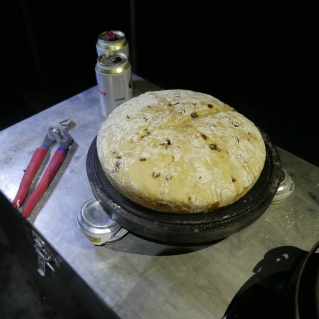 The mixing of the dough can get a little messy. Make sure you have two mixing bowls, a cutting board that you can flop the dough out onto, and a hand-wash station nearby.

Preheat the dutch on a stovetop, or firepan, over low or medium heat, then grease with butter. Set aside a few tablespoons of flour for a cutting board. Mix all the dry ingredients in a large bowl. Make a buttermilk substitute by mixing 1 ½ cups whole milk with 1 ¼ tablespoon apple cider vinegar. We chose to make our own because most people will already have both milk and vinegar. Also, it’s difficult to bring buttermilk for just one recipe on a multi-day river trip, or other backcountry experience. Plus, the apple cider vinegar is used in the shepherd’s pie recipe as well. In the second bowl, mix all of the wet ingredients. Gradually combine the wet ingredients with the dry without overworking the dough. You might not need all of the liquid; keep the remaining handy if you need to add more later.

The dough should be sticky and wet without being able to “pour” the dough. Plop the dough onto a floured cutting board, coating all sides of the sticky dough in flour. Form it into a flattened ball and place in the warm and greased dutch, then cut two crossed slits in the top, about a ¼” deep. Use 6 briquettes on the bottom and nearly a full ring (minus 3) on top, two next to the lid handle. Don’t be afraid to check on the bread at intervals, it’s probably a good idea to let the steam escape, but not necessary. Bake for about an hour, or until the crust is a gentle brown and the loaf doesn’t depress when gently pushed. 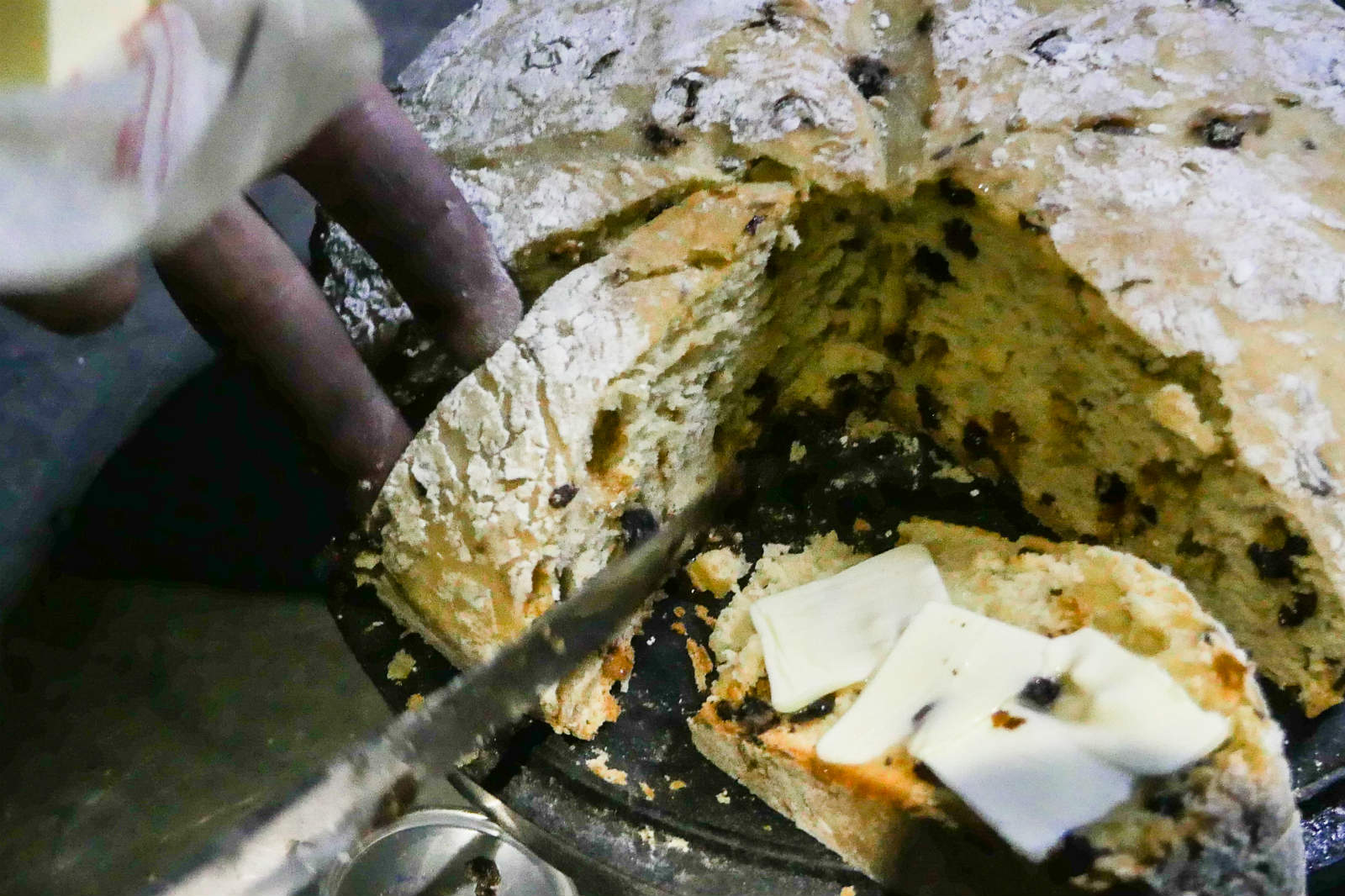