After rushing back home to Idaho to take advantage of record flows and attempt a 300-mile speed descent on the Salmon River, I boarded yet another plane to the East Coast to settle back into school life, enjoy time with my much-missed partner in crime, Jess, and wind down with some mellow paddling. Since I skipped syllabus week, because nothing happens in syllabus week—or so I thought—I had some serious catching up to do. But to let my body heal after that complete whitewater-bar-brawl in the potato state, I shot to “rural” Western Mass, my Tacoma still brandishing its Idaho plates. (When, exactly, does that become illegal?) I wanted nothing else but to have a low-key weekend of paddling on the Deerfield River. That night, Jess and I shared a roomy twin-sized bed at the clinic she was shadowing. It was a mattress primed for sharing when seeking comfort and relaxation; throw a crying baby or two in the mix definitely enhanced the experience. Needless to say, it wasn’t sizing up to be the relaxing weekend I had hoped for. At least we could look forward to sleeping well the next night in the Tacoma. 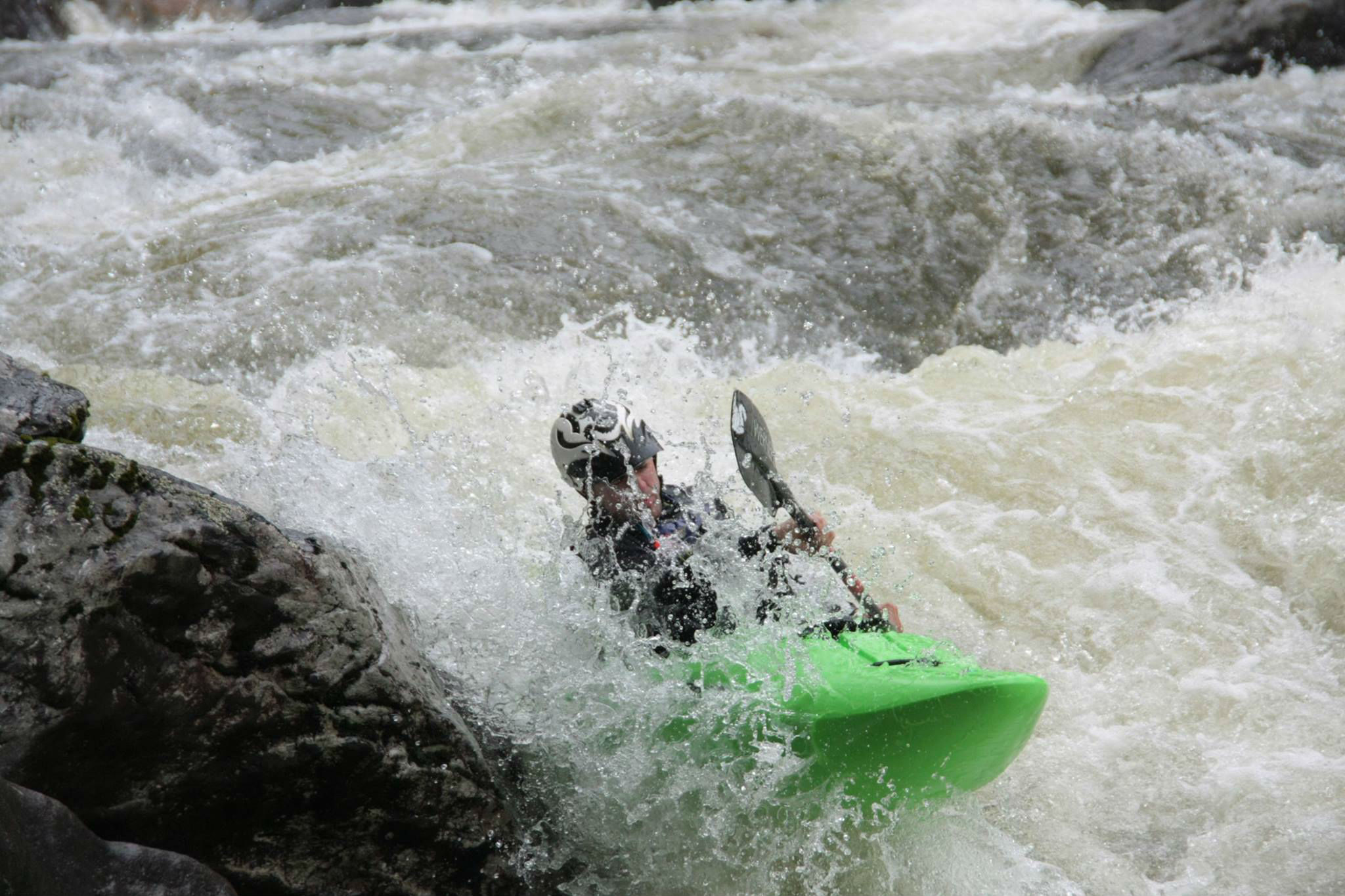 A couple of laps on the Deerfield, a Massachusetts favorite, left our souls happy and our bodies ready for a nap. Things were going great. I was drinking a beer, eating some of my favorite Kettle chips and about to nap when we met him, Kenny.

Kenny, a New York local, bucking most of my NYC stereotypes, rolled up in a massive dodge with at least eight different river crafts strapped to the top. Kenny, it turned out, was a kayaking enthusiast of all varieties, including sea kayaking, and tonight, of all nights, was the PERFECT evening to circumnavigate Manhattan, otherwise known as the ‘isle of New York.’ You know the one? Wall street. United Nations HQ. 1.64 million people living on an island that has a 32-mile circumference. Yeah, that’s the one. All we had to do was drive four hours to New York, forego sleep, rally through some shady parts of Brooklyn, sneak three 16-foot kayaks under darkness quietly over pavement, put on the Harlem river and circumnavigate 32 miles starting at 1 am. Kenny assured us this was a “must do.” After a night of babies crying, cats howling, and being pushed off the edge of the bed like a little kid at a sleep over, it seemed only logical go for it. 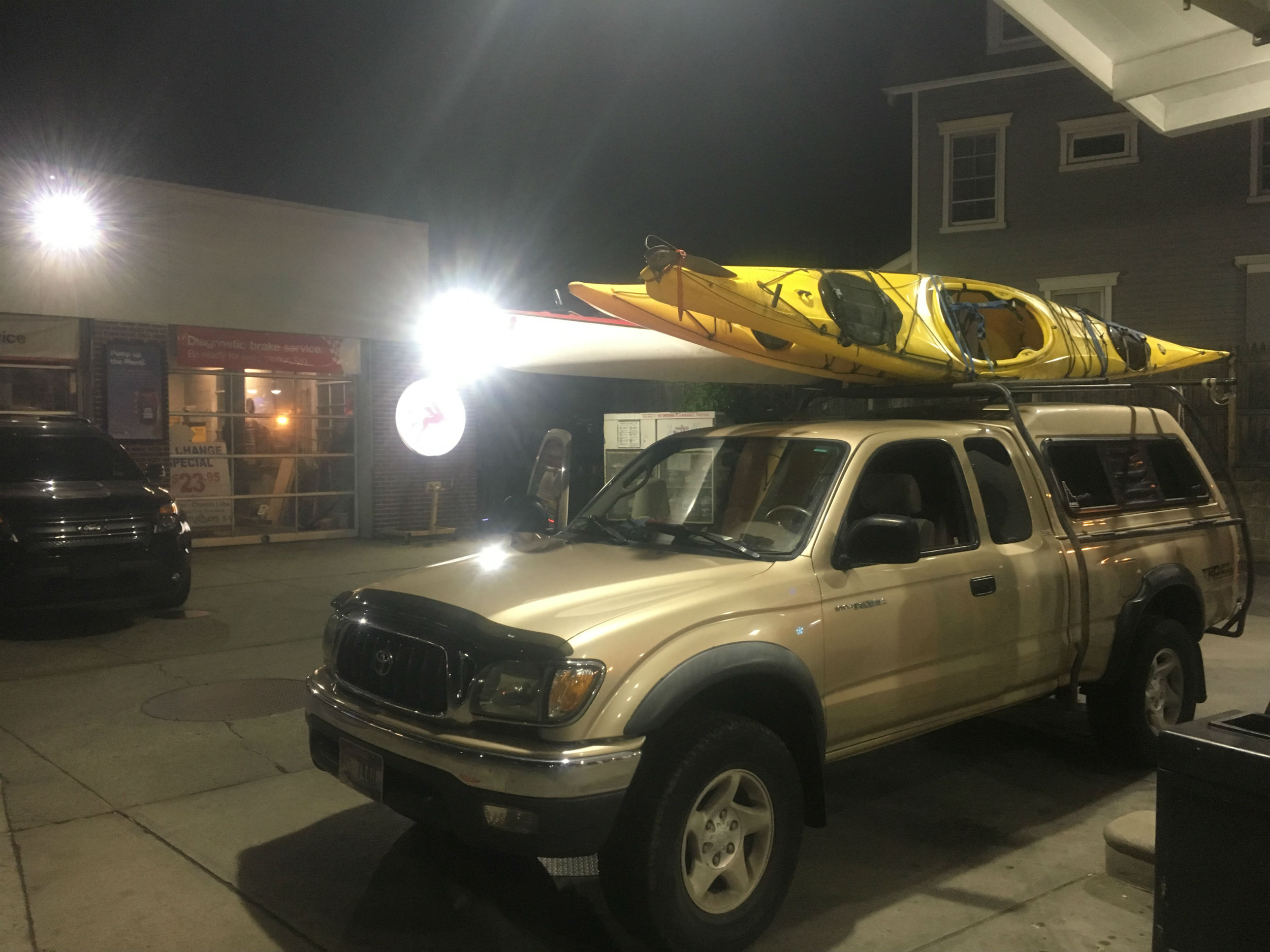 Everything went as planned, mostly. Our one-hour pregame nap before loading kayaks at Kenny’s house turned into listening to cars and mosquitos whiz in our ears. As flash backs of my 300 miler wafted over me, the way a familiar smell brings childhood memories rushing back, I whipped into a gas station and purchased far more Red Bull and coffee drinks than could ever be good for one’s heart in a lifetime.

By the time we hit what felt like a placid body of water, the tide was starting to move upstream, overcoming the downward flow of the Harlem River. We were quickly swept upstream past Yankee Stadium, under the Washington Bridge and past the Bronx. This was such an insane way to experience New York for the first time. I was making fun of Jess for wearing her NRS drysuit right about the time the rain started to fall. She looked at me smugly. I was reminded of the time I had made fun of Max Lawrence for wearing socks with his sandals in Peru, right before my feet and ankles were destroyed by sand flies. 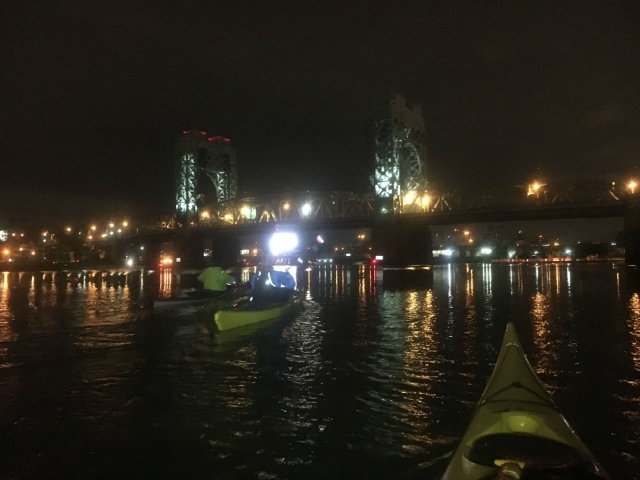 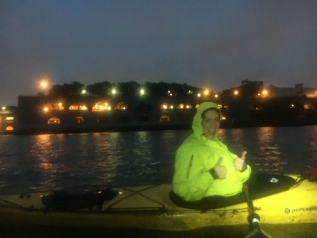 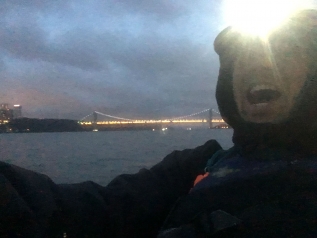 Dawn came quicker than I expected as Lady Liberty appeared on the horizon line. We were ripping down the Hudson now, only reminded of our speed by large eddies forming behind buoys as the tide and river rushed toward the Atlantic Ocean. Grabbing breakfast and enjoying the sunny weather from a seaside deck would have been the way to go had it not been raining and too early to find an open breakfast joint to saunter into soaked in our salty spray-skirts and paddling gear.

The biggest problem for me? New York’s lack of public restrooms and all those caffeine drinks weren’t doing me any favors. I’ll just say that I never thought I’d find myself running through the streets of New York City wearing salty neoprene and clenching my cheeks so vehemently. I couldn’t believe I had paddled 8 hours of flat water through the night, sleep deprived, salty, soaking, and desperately needing a toilet. How could my weekend plans have gone so wrong? I looked over at Jess. She smiled back with a face you look upon a pouting child. It dawned on me that, in that moment, my partner was way more hardcore than me. 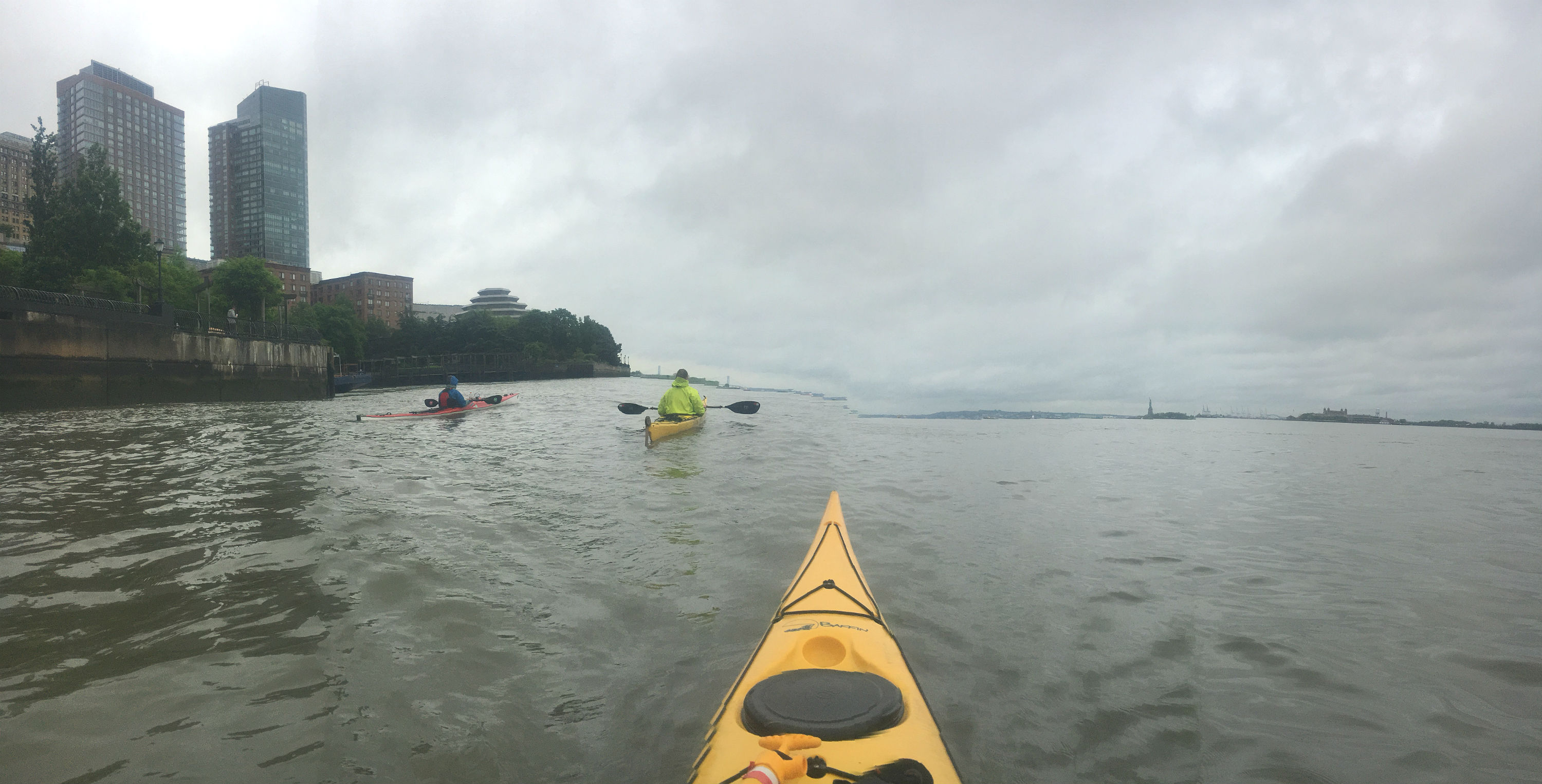 We planned our dawn travel as massive ferries and barges began crossing from the sides of the Hudson and East rivers with no awareness that three tiny kayakers were in the water. We would not even be a blip if we timed it poorly and found ourselves in front of one of these giants. The wake alone would capsize an experienced whitewater paddler. Being out of your boat with more barge traffic coming was an unsettling thought. It was an odd feeling of being gripped that I had never experienced.

We rounded the corner onto the East River and—I’ll be damned—we finished a river trip where we had started! Never in my life…I didn’t think it could be done. All this time I thought my guests who asked me “will we end where we started?” were complete idiots. But no. It can be done. I just needed to open my mind a little (and have a little tidal assistance to push me back upstream). 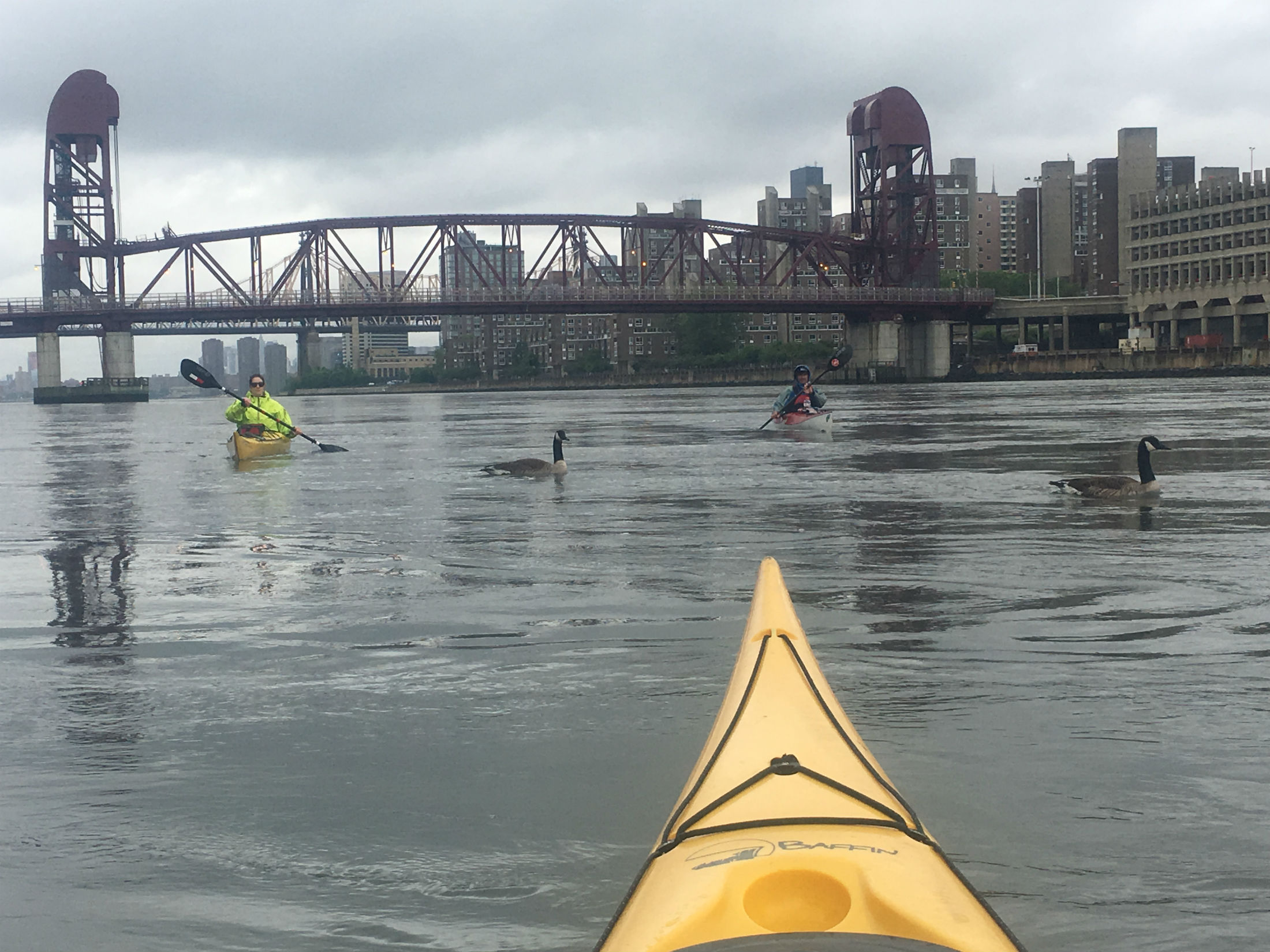 After a mandatory stop at one of New York’s greasy breakfast diners, Jess took the lion’s share of the driving since she had coaxed me into this ridiculous trip. I, a pitiful creature that apparently wilts in salt water if left in too long, passed out in the passenger’s seat mouth-breathing away. Circumnavigating Manhattan. How do I feel about it? With a little sunnier weather, a few more stops for food, pooping, and maybe a nap—I’d do it again. Maybe.