The mega-phone screeches, “And can we please keep the fireworks to a minimum people?” But by that time it was too late. The fuses had been lit and there was nothing else to do but watch two ecstatic Beaver-Fest goers have at it in an epic roman-candle war for the next 30 seconds. After a hard night of rain, trucks were sinking in pits of mud throughout the campground. People looked on with envy at those who brought rain boots. Redneck music blared from the speakers of the landowner’s two-story shack as a three-story-tall bonfire lit up the entire scene: a field of smiling faces.

Labor Day weekend in upstate New York means one thing to kayakers. Beaver River Rendezvous (Beaver Fest): a tradition that has been running for the better part of two decades. I was lucky enough to drop in and experience the scene from the perspective of a first-time attendee (and Idaho-boy), and witness a little taste of the East Coast paddling community.

The Beaver River is located in the heart of the Adirondack state park. Which is made up of a surprisingly large area of green space and backwoods roadways. The area is oddly rich with gradient, even though it seems to be filled with agrarian roots upon the initial approach. With a little bit of travel, driving on dirt roads through rural farm towns, you’ll land within striking distance of a handful of fun, technical and steep runs. On top of that, there are reasonable class III+ sections with plenty of low consequence waterfalls that both the pros and intermediate paddlers can enjoy. All of the runs sit amongst dam-mitigated reservoirs, which have been lobbied for recreational releases that coincide with the greater Whitewater King of New York race series. Labor Day weekend subsists of two of the three initial races used to decide who will wear the series’ crown. 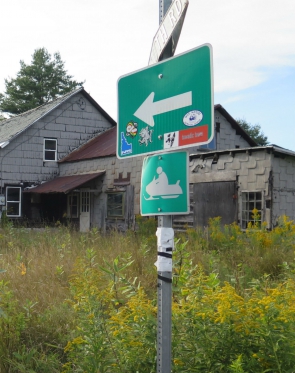 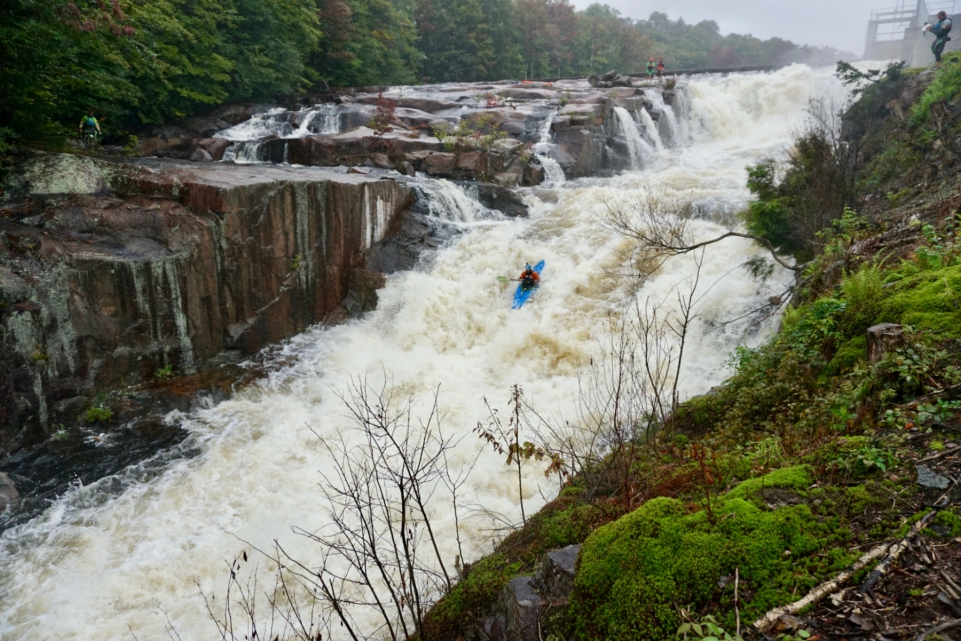 The East Coast boating community is eclectic and welcoming. I paddled alongside some of the best kayakers in the world, plenty of hockey-helmet-wearing club members, dozens of open canoes and some of the top contenders of the NFC. (Those BlackFly Canoes guys sure know how to make some mean tacos!) Boaters flock from as far south as the Carolinas. A party bus specifically designed to carry paddling groupies and boats makes its way from the Great White North of Quebec to the event each year. The Canadians literally bring their own fan club. 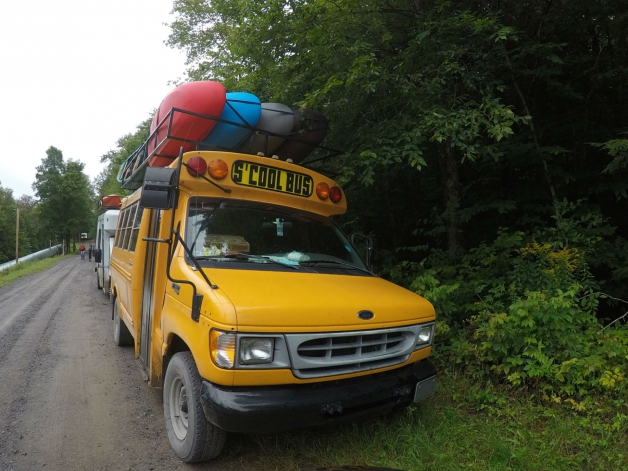 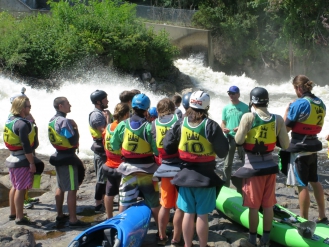 Throughout the weekend, multiple offshoot events happen for those who aren’t there to race but simply enjoy a great weekend with friends on the water. Friday night kicked off with a mini-rescue clinic. On Saturday, “Babes on the Beaver” was organized by NRS to facilitate a breakaway from the often overwhelming testosterone-fueled bro scene, and SUP paddlers were invited to hit the flat water on a misty Sunday afternoon.

Babes on the Beaver

Although this is a fun-filled weekend event of bonfires, whiskey bottle whistle toots, and team paddles, there is an underlying level of competition here that’s home to some of the most well respected kayak races in the nation. The fest is a conglomerate of short races held on steep creeks all within a “short drive” of one another and the main campground, 90 minutes being the farthest haul. The races kick off on Saturday with the Raquette, the longest of the courses and most consequential in my opinion. It starts with a bang on a steep slide that drops around 45 feet within 100 yards. It proceeds through a number of ledge drops and terminates on a steep slide named ‘particle accelerator.’ After running down the course blind, I only found myself window-shading in one sticky hole until rolling up to watch one paddler after another swim into the flat pool below as racers in 13’ long boats blasted by.

Back at the campground, the day winds down—or up depending on your preference. A slash pile collected over the year from the campground property, rises into a blaze that can be felt from an acre away. Reminiscent of those end-of-ski-season couch-burning parties.

Sunday begins with headaches and eggs and then it’s time for race number two: the ‘Eagle Race,’ held on a section that has a few releases each year, but otherwise only runnable when fed by rain and snowpack flashes. Although intimidating to look at, this run is a point-and-shoot-style steep creek. Though, if you’re not on line to start with, ‘The Eagle’ can still dish out the pain. Multiple paddlers entered the steepest of the drops upside down or backwards, one of them leaving with half a paddle at the bottom. This run takes place over a course that’s roughly a quarter mile long, which makes it amazing for spectating especially when considering the stark gradient. With such a short course, racers not only have to be explosive but operate with scalpel-like precision to get that tenth of a second edge over fellow competitors. This year’s race was won by Pat Keller by four tenths of a second.

The races are a fine mix between competitors in long boats, aggressively barreling their way down the course, to weekend warriors hoping to jump on one of NY’s most novel and exciting sections, the presence of hundreds of spectators making that first descent just that much more exciting. Whether wearing a race bib or not, the crowd offer cheers and support to every paddler willing to send it down this set of exciting drops. Racers and non-racers have to find a balance, considering that this section often only runs once a year. One angry goateed racer yelled for paddlers to “GET OUT OF THE WAY FOR RACERS,” during practice laps. But he was quickly reprimanded by his peers about the finer points of sharing; a great example of how the community conducts itself to maintain a cordial and fun weekend for everyone, even those not there for the events. 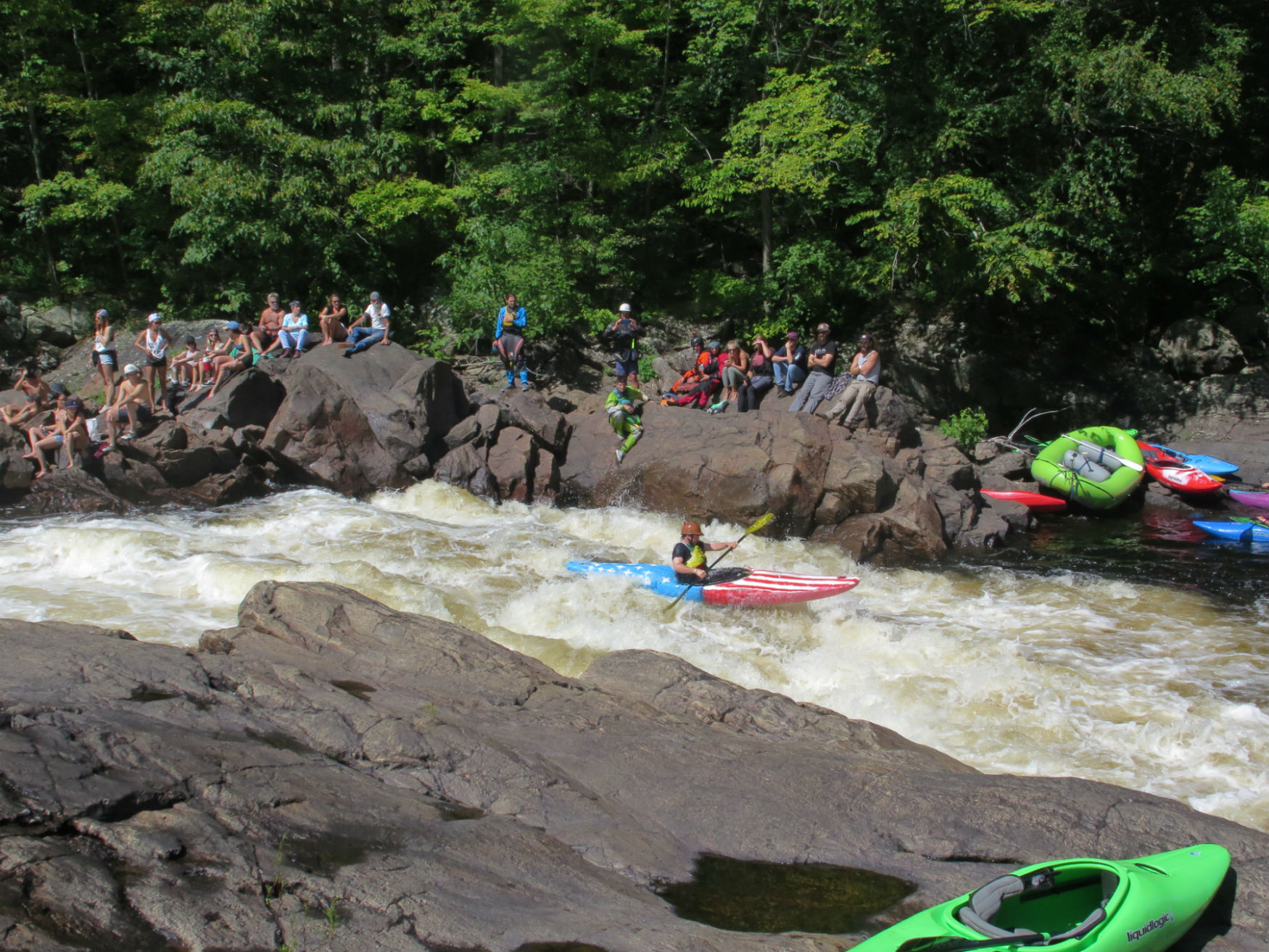 Kenny Unser, the organizer for Beaver Fest, set out to make this year the best yet. From securing an ideal event location amidst the recreational releases on Taylorville Reservoir, procuring amenities such as outhouses (a clutch detail that has gone unnoticed in the past) to organizing safety crews. On top of that, Kenny personally engineered the entire race-timing platform from scratch. (He literally built the race transponders in his home and designed the computer program for this event.) Kenny’s platform can record race times to better than a tenth of a second. Truly a move forward in legitimizing the way water sport races are conducted in the future. Kenny brings an air of excitement and vision to the event that I think will only continue to promote the paddling community and culture and forward the legitimacy of whitewater racing.

After an exciting weekend for racers and recreational paddlers alike, masses of kayakers and canoeists could be seen making their way across the reservoir from camp to paddle together down the class III+ Taylorville section before rallying away from the muddy remnants of yet another amazing Beaver Fest. Perhaps next year I’ll strap on my big-kid pants and hop into a longboat to give this ‘racing thing’ a try. Maybe.