The Green Race: You’ve Been Warned

“I have been warned of the stupidity of this activity, and I freely and of my own will accept this stupidity, ignore all warnings, and participate anyway.”

This is a direct quote of Item 2 of the Participant Agreement, Release, and Acknowledgment of Risk for the Green River Narrows Race in North Carolina. Other items include such terminology as “facial or other lacerations,” “falling from high places,” and “physical or emotional injury.” The Green River Narrows Race is quintessential “Dirty South”… kayaking style. Steep drops, rocky slots, and hundreds of people drinking beer and shouting at you while you breathlessly paddle as fast as you can down a Class V creek. 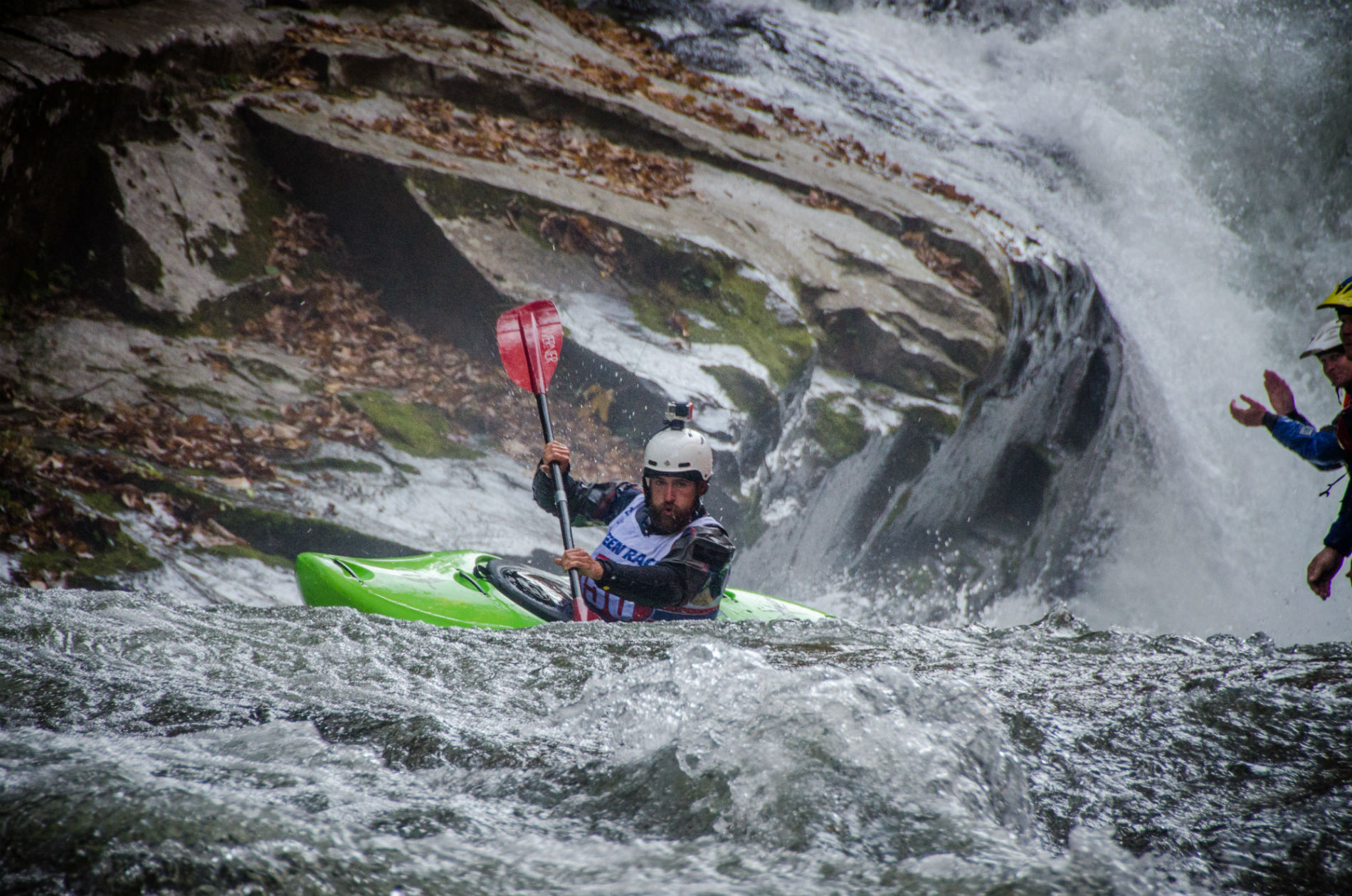 Leland Davis organized the first Green Race in 1996 and a handful of high-caliber paddlers took the bait. It was simple per say: the fastest person from the pool below Bride of Frankenstein to touch “the rock” in the pool below Transit Slide wins. The first Saturday of every November at high noon, racers and spectators have gathered ever since.

In the following years, Jason Hale, and now John Grace have successively taken over the role of race organizer. In 2006, the race reached 63 competitors, which Grace noted as a big year because, “for the first time, we had what we called ‘the hour of power,’ in which there were people going over Gorilla for an hour straight in one minute intervals .”

Gorilla, the Green’s most renowned rapid, starts with a tricky boof through a narrow slot known as The Notch. After making a critical left turn, paddlers then launch off The Flume, a waterfall which looks as if it lands directly on rock. Luckily, the landing is actually a narrow, shallow stream of water, but it shoots downstream with the intensity of a firehose into a hole known as Speed Trap. If you didn’t have the eyes of a boater from the Southeast, you’d likely think the rapid was an obvious portage. 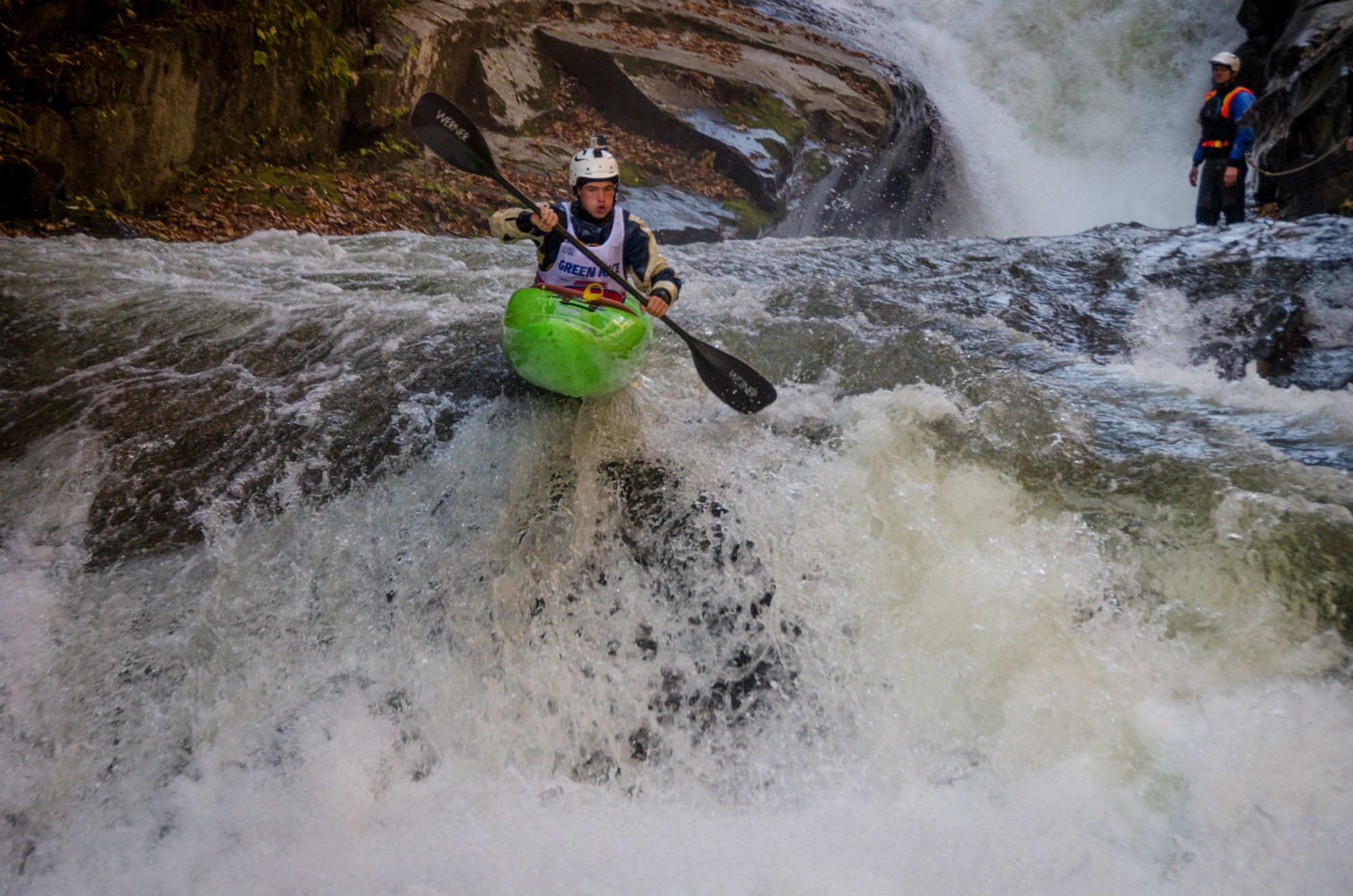 Green Race can be considered both formative and a basis of obsession. Over the years, drinking games were created as coping mechanisms for non-paddling significant others. Hear “boof” and you take a sip of your drink, “Gorilla,” you take a shot, and “Green Race,” you chug your beer (Note: exact rules subject to crowd, and game easily transferable to other river communities and races). In addition to inspiring drinking games, the race has even influenced boat design. In 2006, Dagger introduced the “Green Boat,” a kayak literally designed for coming out ahead that first Saturday of every November, and soon after, Liquid Logic came out with the “Stinger,” similarly designed to navigate the steep and technical Green River Narrows at racing speed.

While the race is something local paddlers have on their minds year round, there is something about fall in North Carolina that gets a sort of Green Race buzz to it. “When the air gets a nip to it, it’s a subconscious adrenaline rush, because you know what’s coming,” notes Chris Gragtmans, a long-time prominent contender who will be competing in his 15th straight Green Race. It will be his first race as a dad with his 7-month old daughter “Al-Pal” cheering him on.

With his renowned enthusiasm, Gragtmans adds, “It’s a day when you elevate what you’re willing to do in every way. One of the coolest things I think, especially for someone experiencing the race for the first time as a spectator is that you can tell where a racer is because you can literally hear the crowds’ roars sweep through the natural amphitheater of the gorge.” 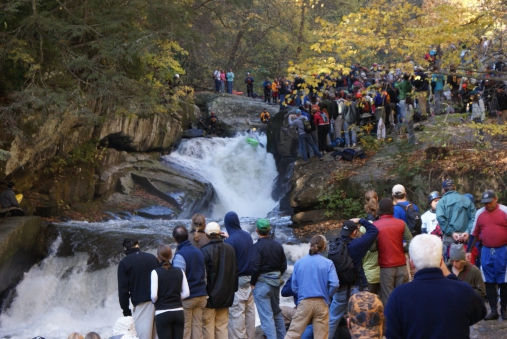 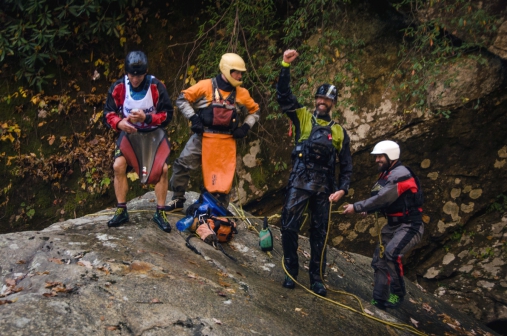 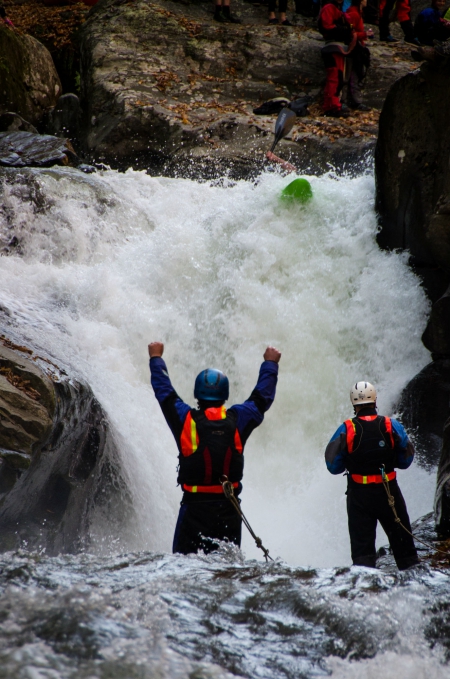 John Grace asserts, “We have the best fans of any sporting event anywhere. They’re better than Nascar fans, better than football fans; they beat anyone!” And perhaps that’s because to be a Green Race fan, you have to be tough. Whether a seasoned event veteran, or someone who hardly gets out for a hike, the full range show up and struggle down the steep, autumn-leaf-covered slope en masse to hike into the deep gorge and watch the race and the carnage.

While spectator shouts may be heard from the sidelines, many racers are so tuned into getting down as fast as they can while staying alive, they only see their next move, and only hear the sound of the river and their own breath. Racing the Green since 2008, top of the field Green racer and Asheville local Daniel Stewart recounts hearing that, during one race, a friend had pulled down his pants and mooned him. A bare bum no more than three feet from Daniel Stewart’s face, and he had no idea until someone told him after the race.

Stewart notes, “You make a progression as a racer, from just wanting to finish, to wanting to do it smoothly, to actually caring about posting a fast time, to then actually being competitive enough to post a fast time.” Ultimately, many competitors agree that a lot of Green Race is wanting to go just fast enough to beat your friends. 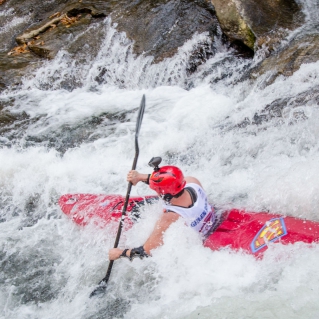 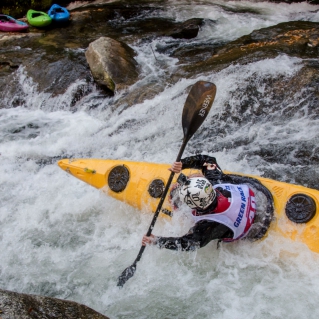 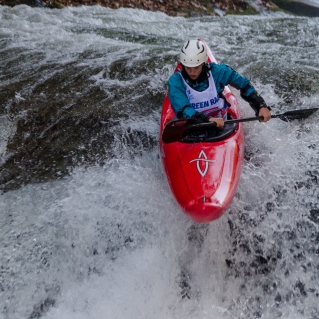 There is no doubt that such a stage is home to countless epic and inappropriate stories. The race is usually paired with decent bets on beating people and “doing something stupid.” One year, as the result of such antics, Jason Hale successfully back-ferried in a long boat into the terrifying “birthday eddy” above Gorilla, a move many deemed anywhere from “impossible,” to “good luck,” to “you’re probably going to lose your face.”

In 2004, while Hurricane Frances and Ivan were pounding the southeast with rain, the Green Race upped its legend status. With the river raging at 200%, or what is estimated to be about 19 inches on the current gauge, the race was postponed for a day. When there was still no wavering in the extraordinarily high levels, the message went out: “Tomorrow, we ride.” Eight racers gathered to compete and since far fewer chose to witness or judge the race, they used the honor system to declare the winning time. That year, Tommy Hilleke, who boasts six trophies, the most wins of any male competitor, won. Currently, female force Adriene Levknecht has overtaken Tommy in trophies with eight overall.

Grace laughs as he asserts, “The real battle is who can outlast who, and have the most number of races.” Jason Hale leads at 19, Tommy has second with 18, and Grace holds third with 17. 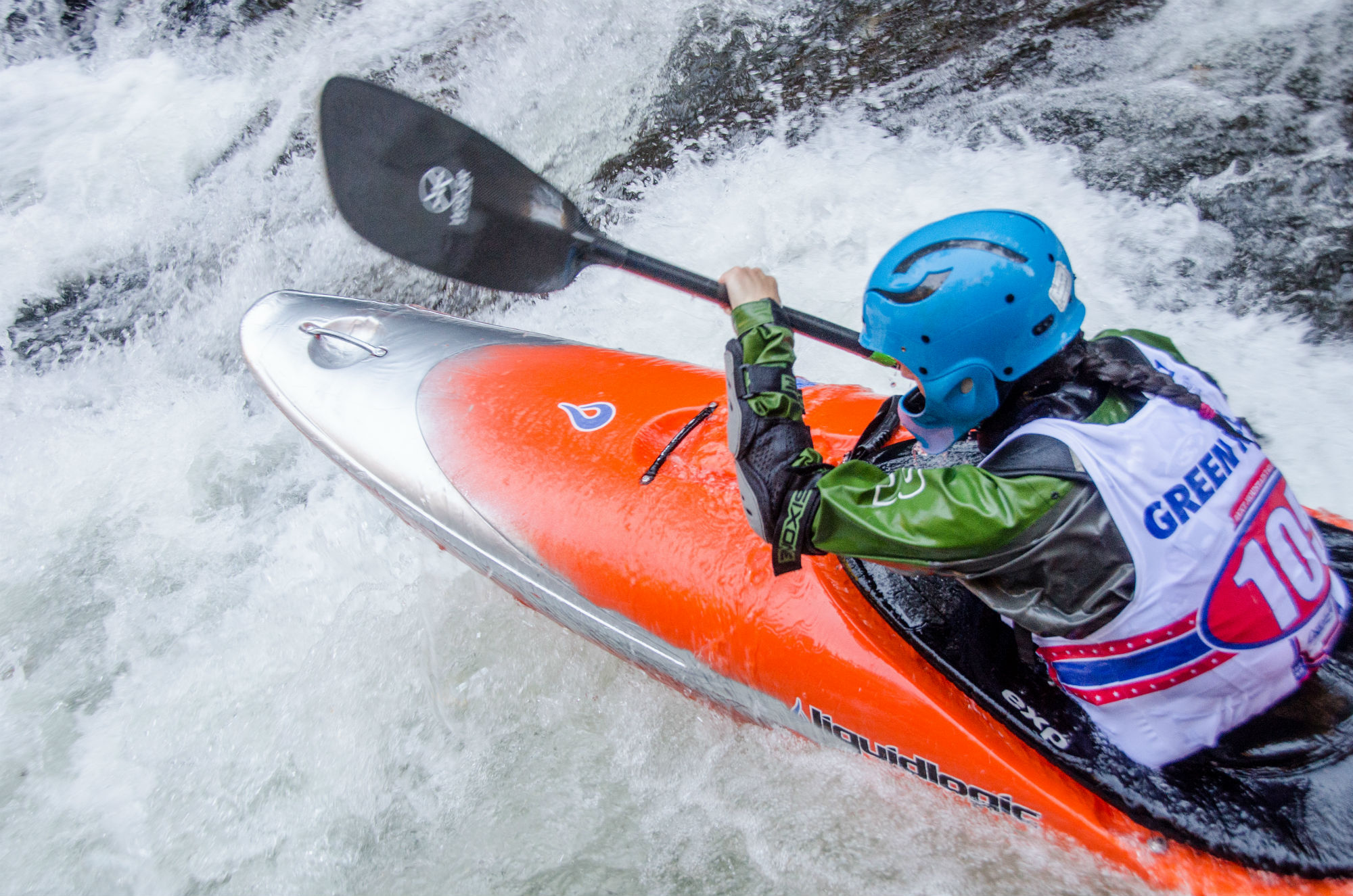 Last year North Carolina was in a historic drought. Duke Energy worked with race organizers to overload the generator enough to provide a much needed extra inch of water for the race. Despite the low water level, 59 racers finished in a time of under five minutes, which used to be a coveted realm reserved for top finishers. In 2016, Green Race also included eight female racers, the largest number of women to ever compete in the event that now caps out at 180 total participants. Categories include the full gamut of longboat, short boat, “Ironman” (racing in both a long and short boat), hand paddle, C1, open canoe, and for the sake of being all inclusive, a raft category if anyone dares to try.

“The interesting aspect of Green Race is that practice laps are definitely more intense and more dangerous than the actual race,” notes Gragtmans. “You’re out there on your own going fast without a bunch of extra safety, and that often gets forgotten. In recent years, I have tried to look over my shoulder a little more, and recognize that it’s good to have a plan. I train with similar-ability paddlers starting 10 seconds apart; it’s just enough that you can make a mistake or two, but can still see each other. It’s pretty fun to have six to eight people blue angeling the river. You have a rabbit to catch in front of you, and you know you’re a rabbit too.” 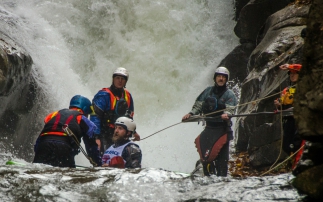 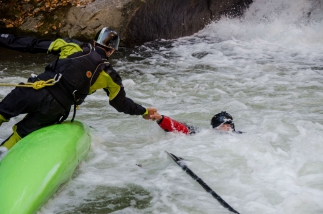 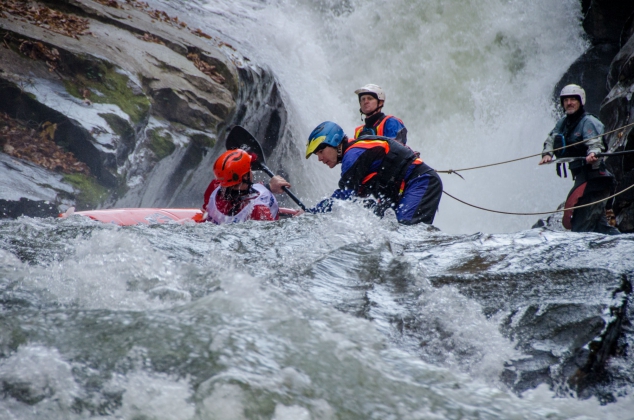 2017 stands out as a remarkably competitive year, stacked with previous champions such as Isaac Levinson, Eric Deguil, Dane Jackson, and Pat Keller. The peanut gallery reports that, “Dane is the obvious one to watch because, out of the recent champs, he is the only one that hasn’t won the race outright,” AKA not in a tie. For the women, Adriene Levknecht, the reigning Queen of the Green who won by a full 56 seconds last year, is looking strong as ever. Female contenders MacKenzie Hatcher, Emily Shanblatt, and others are charging hard in the mix.

The Green Race has seen big names and no names of kayaking from its start, but through the years it has stayed true to a soulful, grassroots-driven event. British kayaking guru and racer Fergus Coffey describes it as, “one of the most relaxed, but pretty serious races out there.” From newcomers to old timers, spectators to racers, the roots can’t be described as anything other than love when it comes to Green Race. And despite being formally warned of the “stupidity” of it, fans and competitors will no doubt be in full force every first Saturday of November, this year for the 22nd annual Green Race, and many years to come. 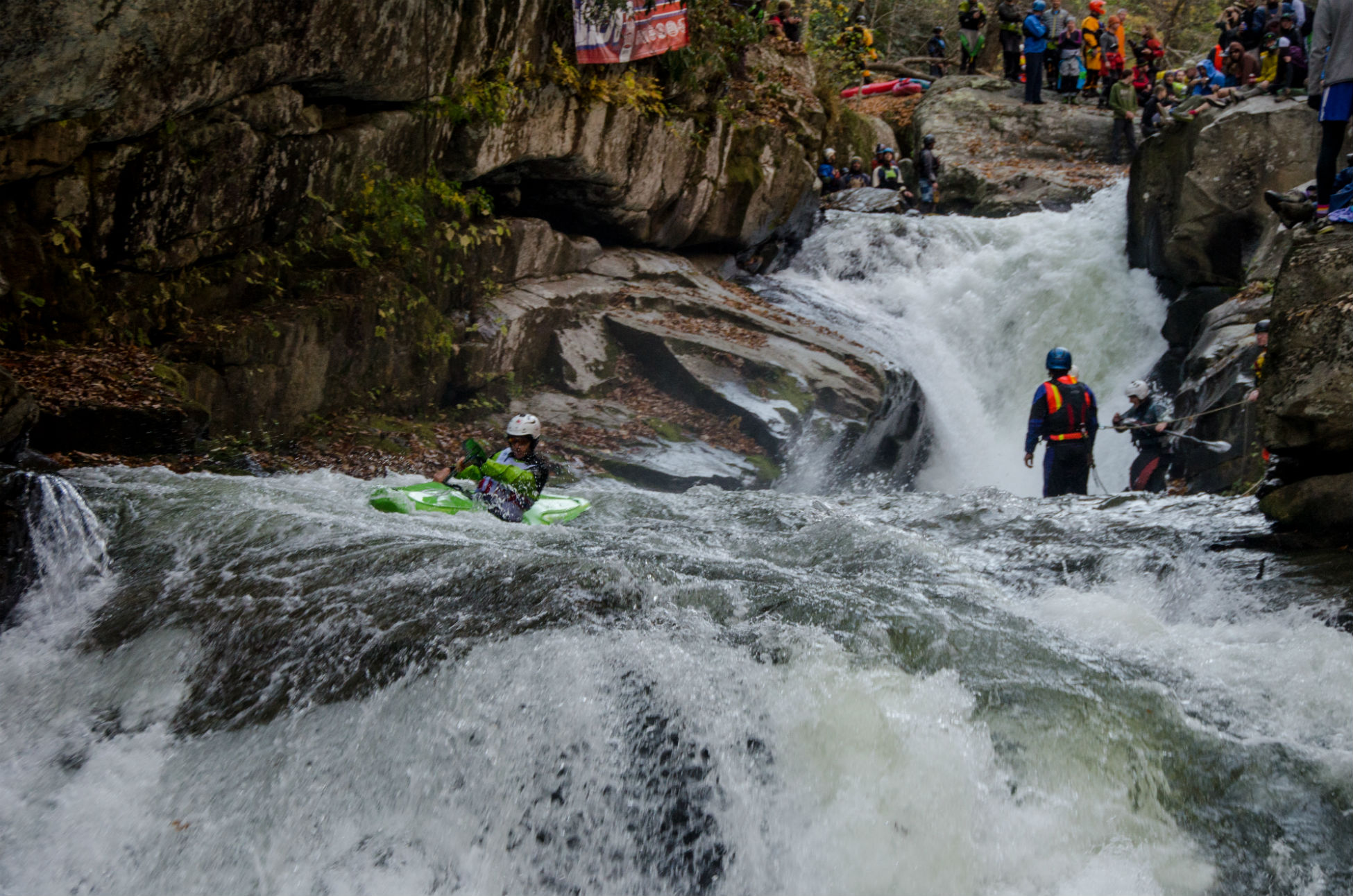 Pre-Party: The pre-party is at Salvage Station in Asheville at 6:00 pm on Thursday, November 2nd and is renowned for being the “big night.” An AW benefit that includes music, announcing race seeds, and movie showings of Green River Rodeo. This year, the feature film premiere highlights the journey of the Nolichucky River gaining Wild and Scenic designation.

Post-Party: The post-party will be at the Blue Ridge Community College Conference Hall from 6:00-11:00 pm. Results will be announced amongst music and the race video.

Activities other than kayaking: Big Bradley Falls is a gorgeous hike in the immediate area, and the Gorge Zipline is known for providing an adrenaline rush through the canopy.

Eats and Drinks: For lunch and dinner, The Purple Onion in Saluda is a great restaurant with hilariously sporadic hours/days of operation. (Don’t trust the posted hours on Yelp.) But if you do have their hours figured out, please enlighten all of us, we’d love to know. For good ol’ Southern BBQ, Green River BBQ is a local favorite in Saluda.

If you’re an early riser or in for a wait for breakfast, hit up Sunny Point Cafe in Asheville. Otherwise, head down the street to Biscuit Head to “Put some South in your mouth.” For a yes please IPA… and then another, hit up The Wedge Brewery down by the river in Asheville. And thank God for the ‘Brunch Bill’ passed earlier this year, which now allows restaurants to serve booze before noon on Sundays because the need for bloodies and mimosas is a guarantee at the end of the Green Race weekend.