The third deepest canyon in the continental United States, the Clarks Fork of the Yellowstone is one of the best and most challenging multi-day rivers in the Northwest. Known as ‘The Box’ for its sheer canyon walls towering on each side of the river, it has an unforgiving nature of difficult whitewater and long portages through trail-less, steep terrain. Only runnable at low flows, the Box is unique because when most other rivers are getting too low, this section is just coming into its prime.

I had the opportunity to paddle the Box twice this year in back to back descents. The first with Dan McKay and Andrew Gonzales. The second with a group from Bozeman, Montana. 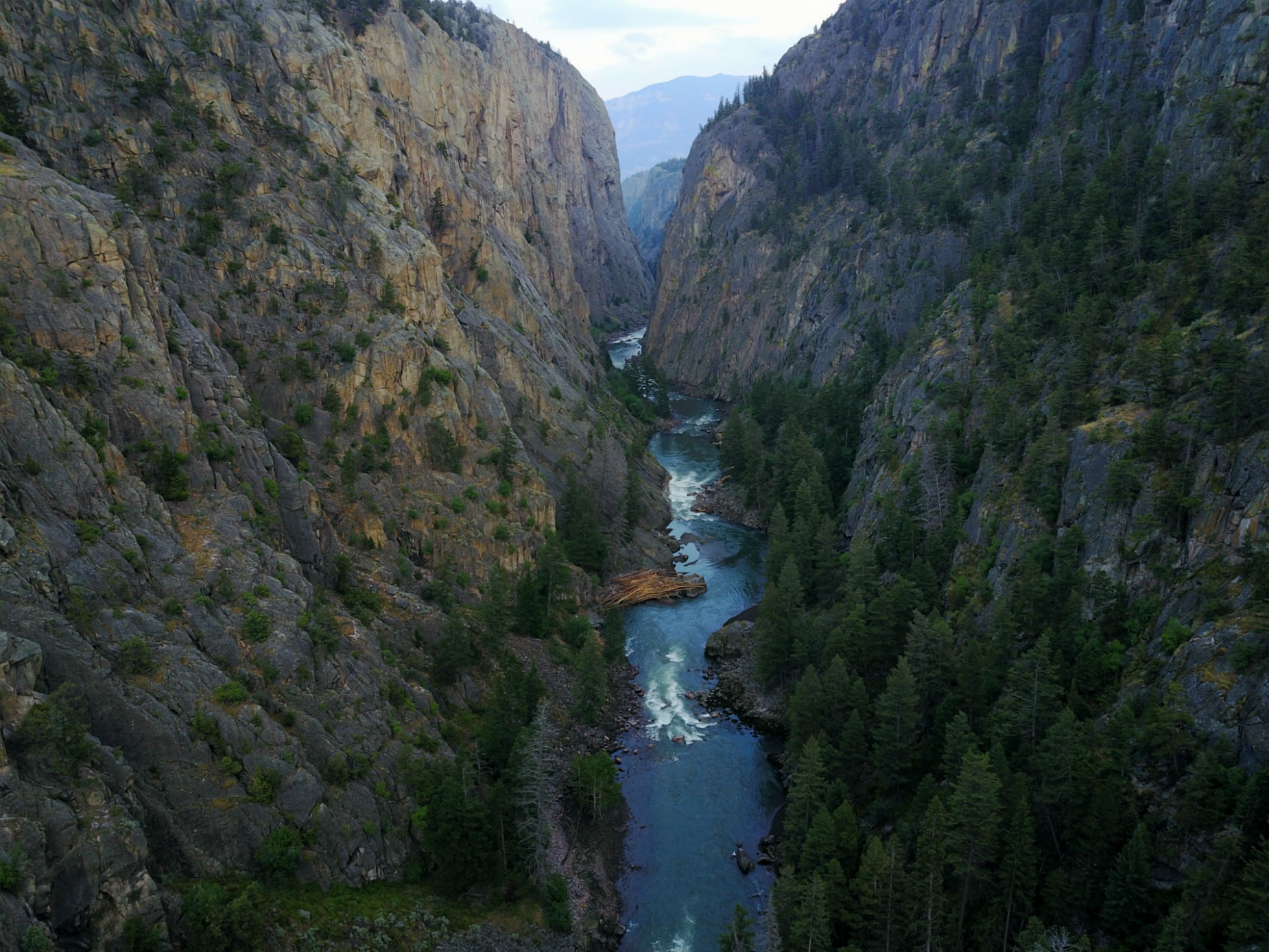 I was 16 the first time I dropped into the Box. And five years had already passed since my most recent descent. Dropping into the Box on the first day of my third descent was absolutely incredible. The whitewater began rolling away behind us and by mid-afternoon we were into the first big portage, the Green Giant, and the gateway to the Box. Three miles of flat water and another hefty portage follow the initial one-hour portage before you get into the true start of the canyon. 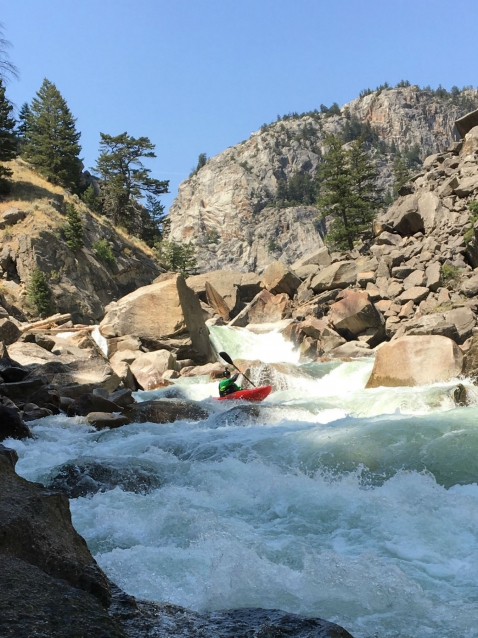 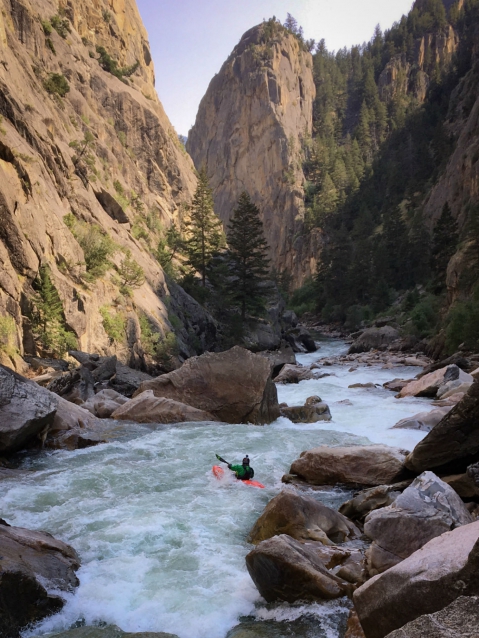 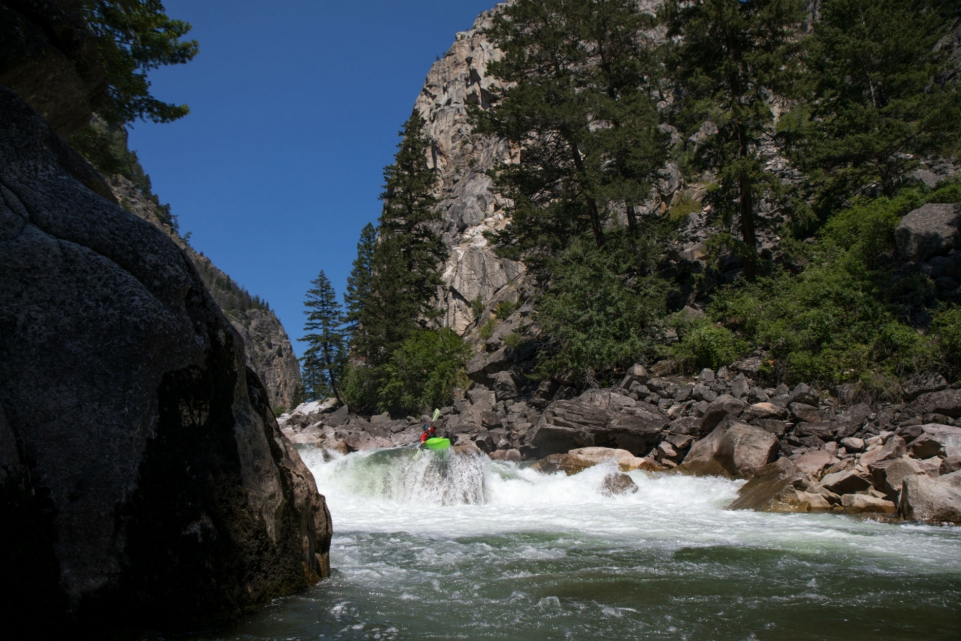 Once you hit The Box, class V drops begin to string together, one after the other, as the canyon tightens more and more. Mountain goats frequent the solitude of the cliff walls and the beauty and magnificence of the sheer canyon provide the perfect backdrop to some of best whitewater around. 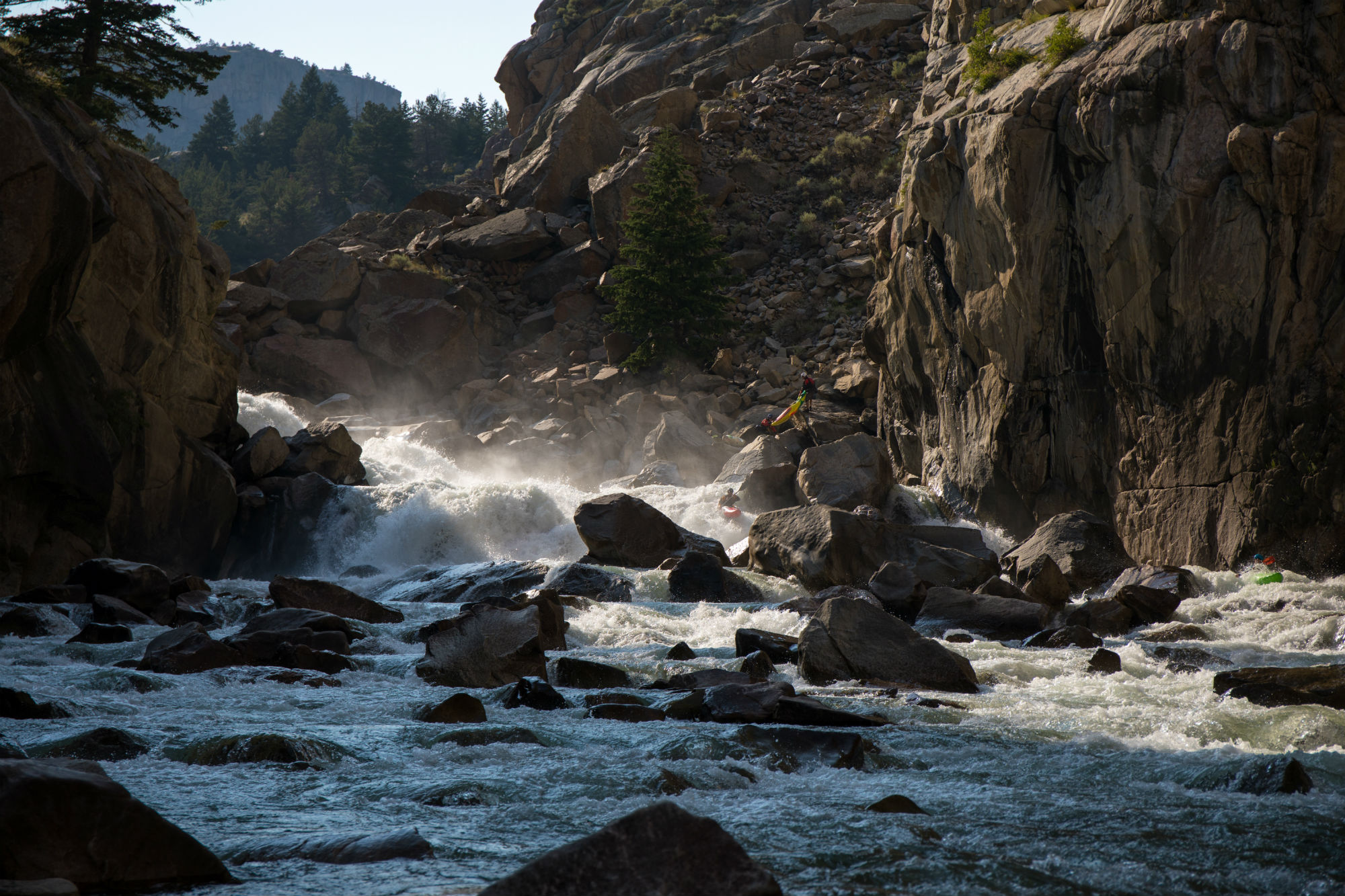 Emerging from any committing descent is a bit of a surreal experience. The walls begin to widen, a road comes into sight and the sun reflects off the windshields of your rigs. It’s a bittersweet experience. But this time, when I said goodbye at the takeout it was to my buddies, not the river. I was planning back-to-back descents. Another crew of friends was putting on the river that same day. 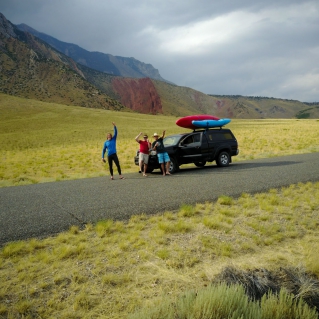 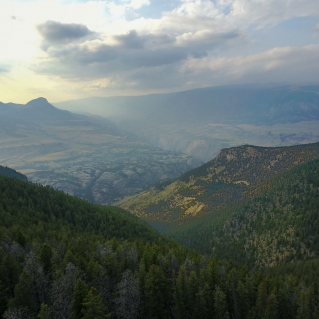 A message came through on my phone as I got into service: “Camping below 2nd portage, aka Ankle Breaker. Bring Whiskey Boy!” I was pretty beat down from the day and in no position to put in just before dark to paddle five miles of class IV, a half-hour portage, three more miles of flat water and another 30-minute portage.

Luckily, I had been given a little beta by a crew we met on the river of a secret fisherman’s trail leading into the flats just above the portage. I drove to the head of the trail near a small lake, ate freeze-dried turkey tetrazzini for the second night in a row, put up an NRS strap to keep the bears away, and fell asleep to the howling of coyotes. 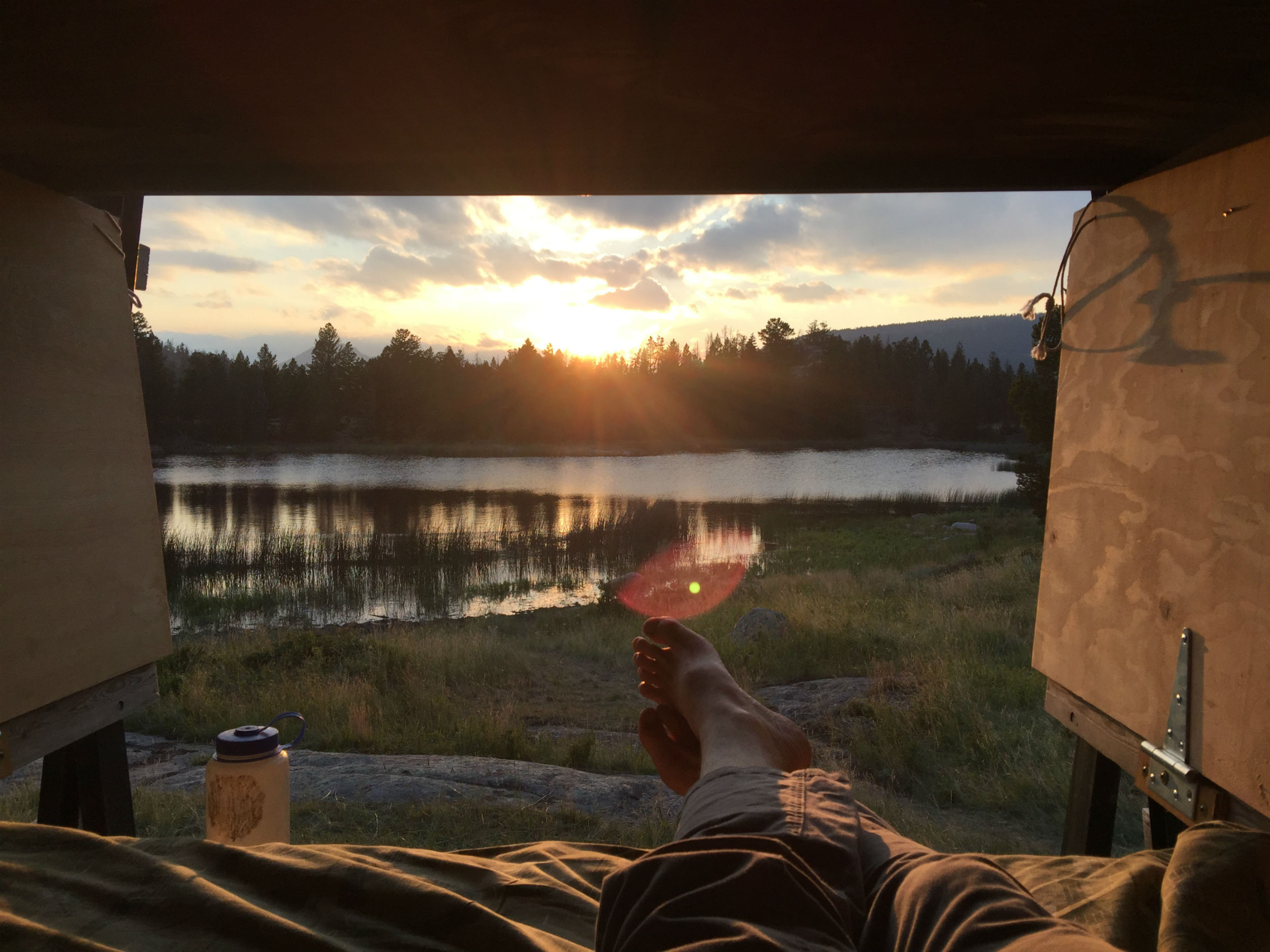 It’s said “You never step into the same river twice” and this could certainly be said for the Clarks Fork of the Yellowstone. At daybreak I warmed up my truck to put on frozen gear, and scrambled down the fisherman’s trail to the flat water. I was eager to begin another descent and to see a different bunch of good friends somewhere downstream. As I scrambled over talus and through the Ankle Breaker portage, I could see camp was still in place and I would have no trouble catching the party. I arrived to cheers from the crew and hopped in my boat to ferry over. I could immediately tell the pace was going to be different from my earlier descent. This group of six had a couple paddlers who had never paddled The Box before. 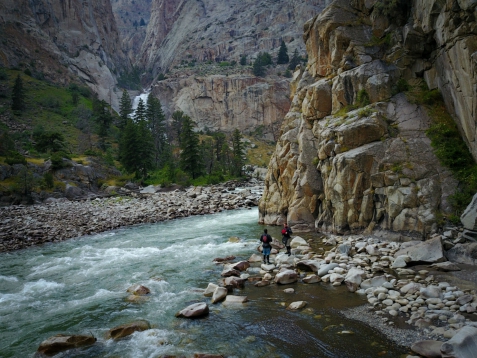 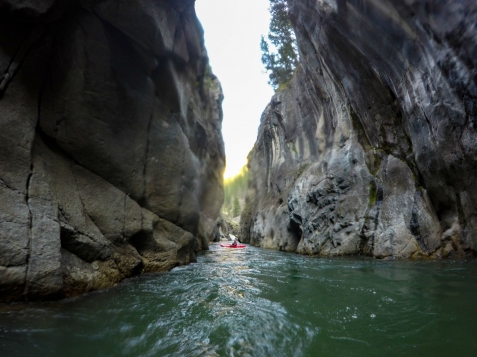 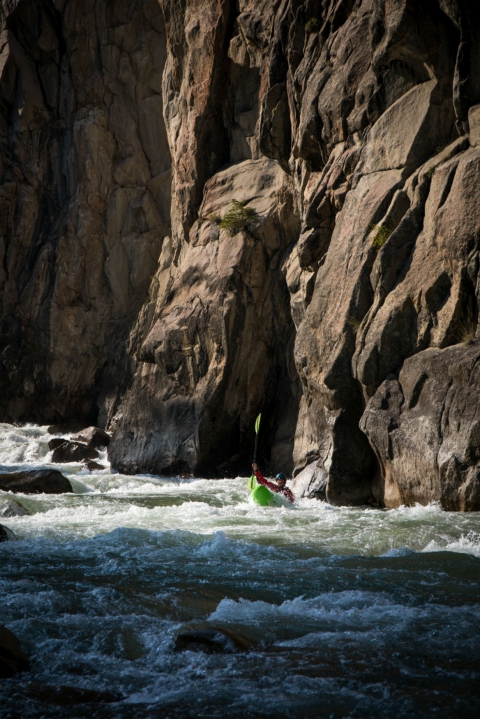 I resigned myself to help as I could and slowly we made our way downstream. The day went on eventfully, we helped another crew pull a boat out of a siphon. My energy began to wane. I managed to run all the drops but I felt my lines deteriorating. I had invested too much energy in helping my friends on the river and was beginning to pay the price. I slowed my pace and scratched through into the last eddy and mustered energy to carry a fully loaded boat I had been helping a friend with all day. As we put in for the paddle out a moment of complacency got the best of me and I set my boat too close to water. Suddenly, it peeled out without me and ran into a class IV sieve garden, around the corner and out of sight. After swimming two rivers and scrambling for half a mile downstream, I found the crew with my boat an hour later. 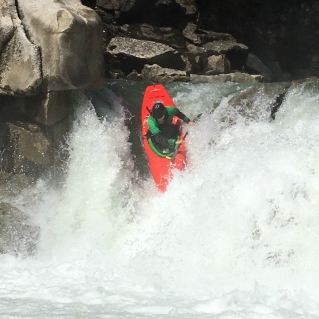 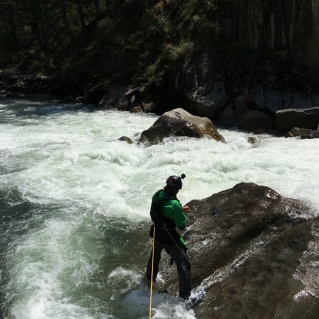 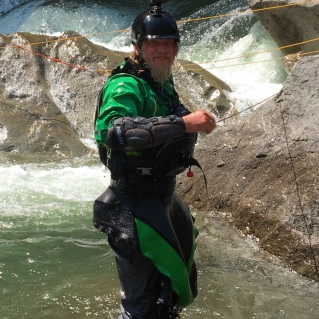 The shadows were long but our spirits were high as we paddled out of the Clarks Fork of the Yellowstone, already eager for it to drop back in next year. Rich with history, classic class V whitewater, wildlife and stunning scenery the Box is one of my favorite runs on earth. The feeling of sleeping between tight canyons walls, paddling through one of the deepest canyons in North America, and navigating a place where only Native Americans and kayakers have ever passed is a beautiful experience. I cut my teeth on this river. And on every run since, I get to test myself against a fifteen-year-old Tyler Bradt, a wild man with everything to prove and nothing to lose. I always stand by the rapids and shake my head and think to myself “what was I thinking?” 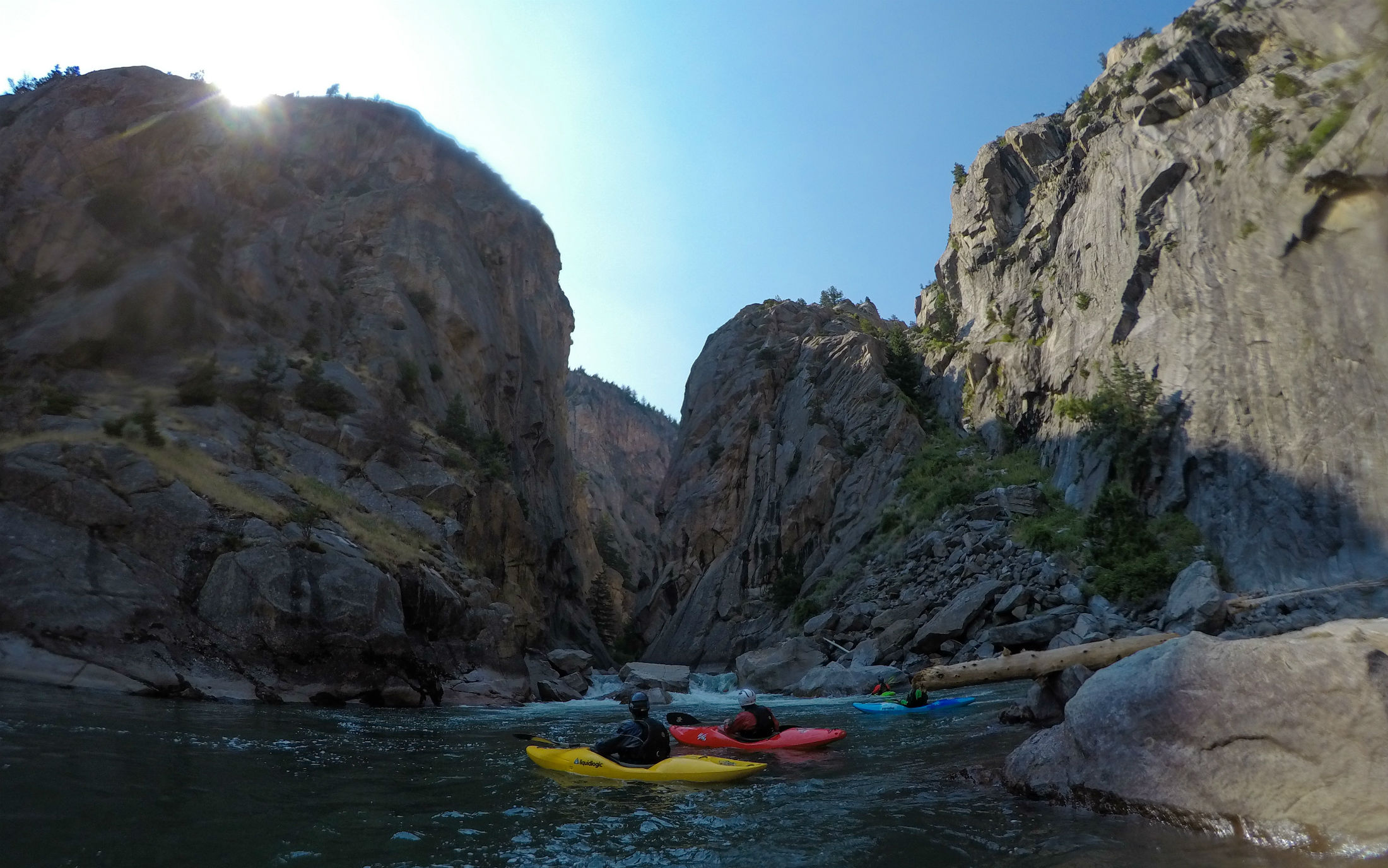