The rivers featured in April’s Wild & Scenic Wednesdays are all in NRS HQ’s backyard. In fact, any given weekend you could catch a crew heading south to paddle any one of these. And the non-profit that sponsored this month’s rivers hits just as close to home. The Redside Foundation supports the health and strength of the Idaho Guiding Community by providing all licensed Idaho guides (water, ski, hunt, etc.)  educational scholarships to universities/colleges throughout the US, grant opportunities to professional training courses (such as swiftwater rescue and wilderness first aid/responder), and confidential access to mental and physical healthcare through a 24-hour helpline. 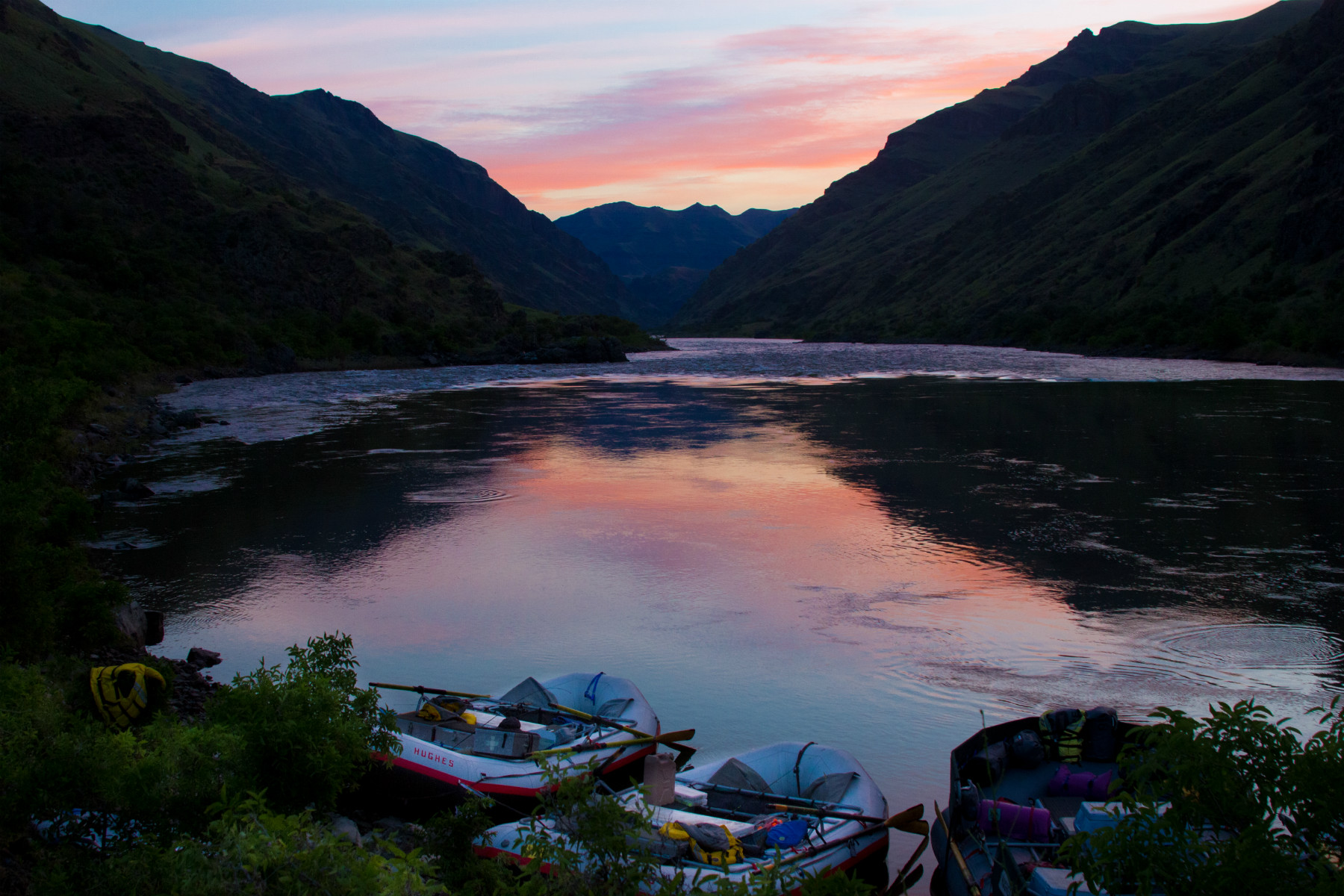 1. Hell’s Canyon was formed by the down cutting of the Snake River through volcanic rock roughly 6 million years ago, forming the deepest gorge in North America (7900’ deep at its deepest point) and averaging 5,500’ deep.

2. The Snake River is the largest tributary of the Columbia River, draining an area about the size of the state of Oregon. The depth of the river ranges from 2-3 feet to 105 feet.

3. Although dam regulated, flows average 35,000 cfs and can reach 100,000 cfs below its confluence with the Salmon River. The volume of water below Hell’s Canyon Dam often exceeds the amount carried by the Colorado River through the Grand Canyon.

4. Hell’s Canyon is the ancestral homeland of the Shoshone and Nez Perce Tribes. Evidence gathered from the Bernard Creek rock shelter confirms early occupancy of the canyon at 7,100 years ago. A clovis point found in the canyon suggests occupancy dating as far back as 15,000 years. Many petroglyphs and pictographs can be seen along the river.

Middle Fork of the Clearwater River, ID (Wild & Scenic circa 1968) 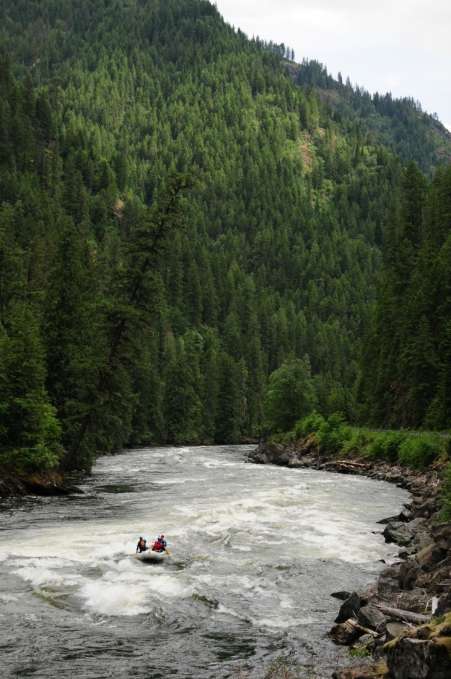 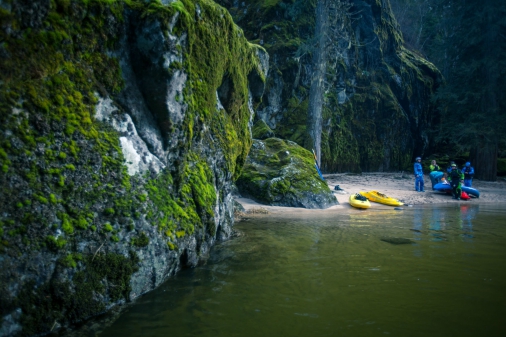 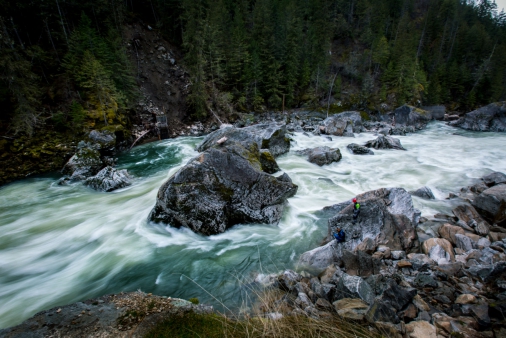 2. Lochsa (pronounced “lock-saw”) is a Nez Perce word meaning “rough water.” The Salish people, along with the Nez Perce, fished for Salmon in the Lochsa. Part of Lewis and Clark’s westward route of discovery is also along the Lochsa and Clearwater rivers. Their travel through this area was extremely difficult because of rough terrain and early snows.

3. Between the towns of Powell and Lowell, the Lochsa has more than sixty medium to difficult grade rapids which offers both fun and challenges for all river runners. The most commonly run section is from Fish Creek to Split Creek, which has 22 named rapids (13 of which are rated Class IV) including Grim Reaper and Termination.

4. The Selway River runs through the 1.3 million acre Selway-Bitterroot Wilderness, the third largest wilderness in the lower 48. The challenging rapids and pristine beauty of the river make the Selway one of the highest quality whitewater rivers in the US. To float the Selway, individuals can apply for a private permit or float with one of only a few outfitters who run the stretch; only one launch is allowed per day during the controlled permit season.

5. American Whitewater co-founder Oz Hawksley led the first trip down the Selway in July 1960. He described the Selway as “one of the most beautiful wilderness areas, with a navigable river, left in the US.” Oz helped with the Selway’s W&S designation. During a 1961 Selway trip, one of Oz’s group members got stuck on a midstream boulder and lost all of the contents of his raft including their dinner ham that sank to the bottom. The following week, the group returned for another run and brought a mask and fins to successfully find and retrieve their ham. Today, the rapid is known as “Lost Ham” or “Ham.”

1. The Bruneau River flows through an 800’ deep and 1300’ wide gorge in Southwest Idaho. The origin of the river’s name is unclear, but it’s likely named after the Northwest Trading Co. explorer Jean-Baptiste Bruneau who explored the area in 1818, or for the French translation of “brown water.”

2. For thousands of years, the Shoshone-Paiute and Shoshone-Bannock occupied the area. Many petroglyphs, pictographs, rock alignments, shrines and other sacred sites are found throughout the Bruneau and nearby Owyhee canyons. Tribal members still use the area to hunt and fish, and for ceremonial purposes.

3. Depending on the snowpack in the Jarbidge Mountains, the whitewater season on the Bruneau can be anytime from April to Mid-June and often times is difficult to predict. The road to the put-in is jokingly called “class V” due to extremely challenging conditions. A 4×4 vehicle with all-terrain tires, two spares, high clearance and a lift jack is recommended.

4. The largest amount of vertical-walled rhyolite/basalt canyons in the western US is along the Bruneau, Jarbidge, and Owhyee River systems. Weather and erosion have created large monolithic cliffs and pinnacles called “hoodoos” that can be seen throughout the canyon. 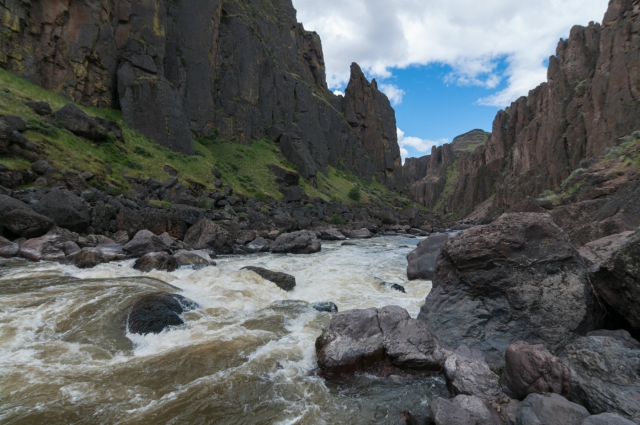 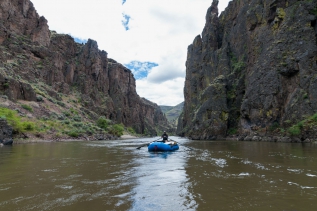 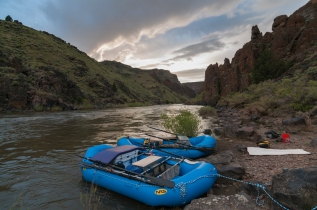 1. A 346-mile-long tributary of the Snake River, the Owyhee River begins in northern Nevada, flows through Southwestern Idaho and empties into the Snake River in Oregon. A section of the river is known as the “Grand Canyon of the Owyhee” due to the steep, rhyolite walls ranging from 800-1000 feet in height.

2. The Owyhee is generally paddled between the months of March and June. The rapids are rated class III to IV with one class V called Widowmaker. This rapid is typically portaged or rafts are lined through along the bank.

3. The Owyhee River canyon is home to over 200 wildlife species including a rare plant, the Owyhee River forget-me-not, and the redband trout, a subspecies of the rainbow trout. The canyon provides habitat for bighorn sheep, elk, mule deer and pronghorn.

4. The Northern Paiute, Shoshone and Bannock tribes inhabited the Owyhee River area which provided water, fuel, food and protection. Some petroglyphs found in the region are estimated to be 9000 years old. The “Hole in the Ground” petroglyph site is one of the most outstanding sites in Eastern Oregon.

5. The name “Owyhee” is an older spelling of “Hawaii” used by British and American traders in the early 19th century. The region was named after three Hawaiian trappers who were sent to explore the river. They failed to return and were never seen again.