Shred for the South Fork

The small town of Yellow Pine lies deep in the Idaho backcountry, hidden between Boise and McCall. Only 25 individuals are hardy enough to withstand year-around residency, but its summer population swells to over 8,000 as people flock from around the west to attend the annual Music and Harmonica Festival featuring the world’s best harmonica players. The Yellow Pine Tavern may seem to open and close at odd hours, but if you’re looking for a cold beer someone will be happy to open the bar just for you. This little town even hosts the US’s only Forest Service “maintained” 18 hole golf course, bolstered on either side by the two powerful rivers which eventually converge to become the East Fork of the South Fork Salmon. 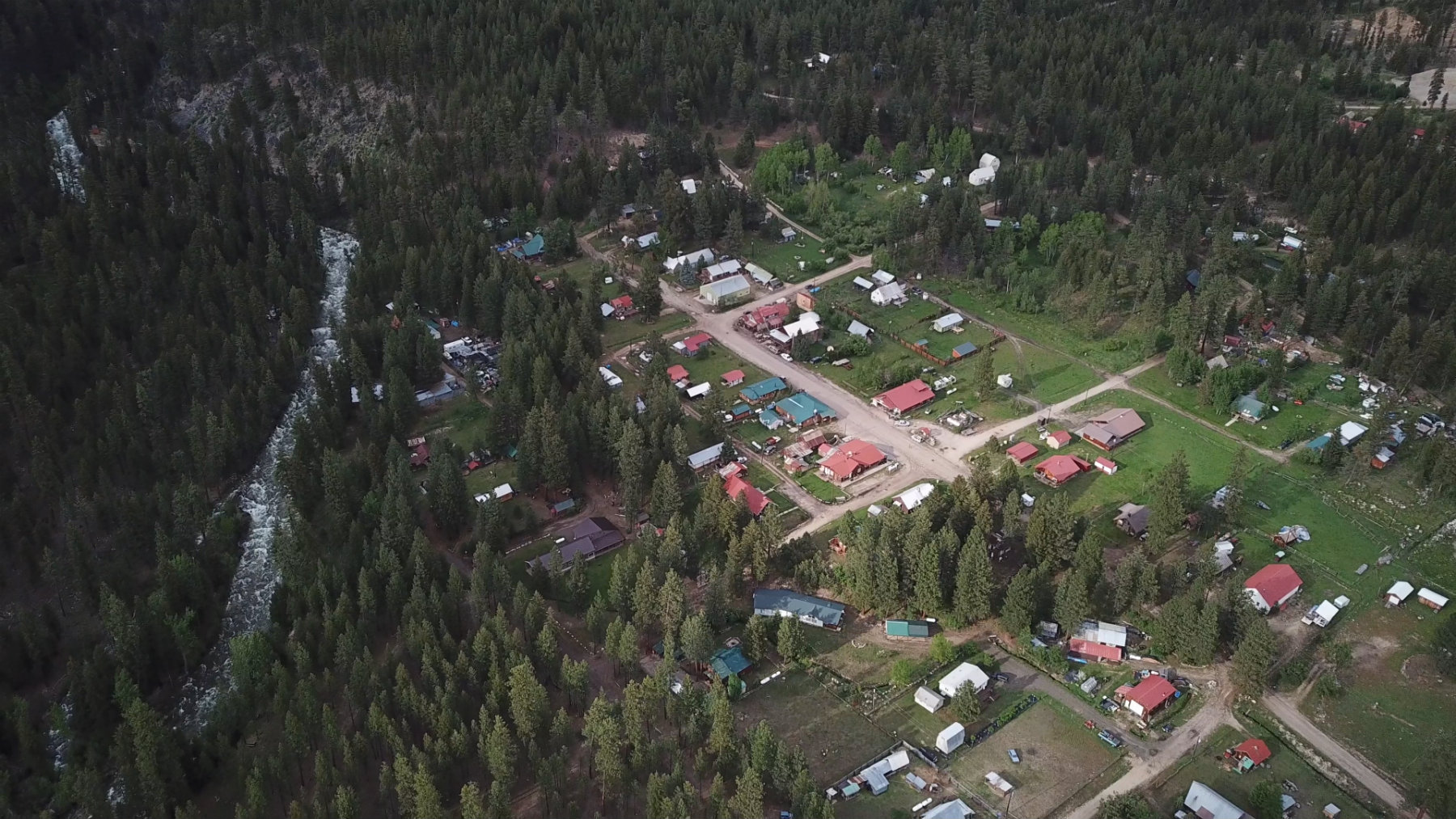 One of Idaho’s longest and most technical rapids, ‘Flight Simulator’ lies roadside and tempts would-be paddlers into the maelstrom of what lies downstream during early spring flows. As the water drops in mid-summer months, the class V rapids mellow, eventually turning into what some locals would consider incredible swimming holes. Between these flows, lies an amazing opportunity for class III-IV boaters to push their skills. Steelhead fishermen cast stout lines from its banks when the fishing populations allow. A population which has struggled to make a comeback after historical mining practices pumped toxic chemicals and tailings into the river. 18 miles downstream, the South Fork matches flows with the East Fork and then again adds nearly 30% of flow at the confluence of the Secesh. 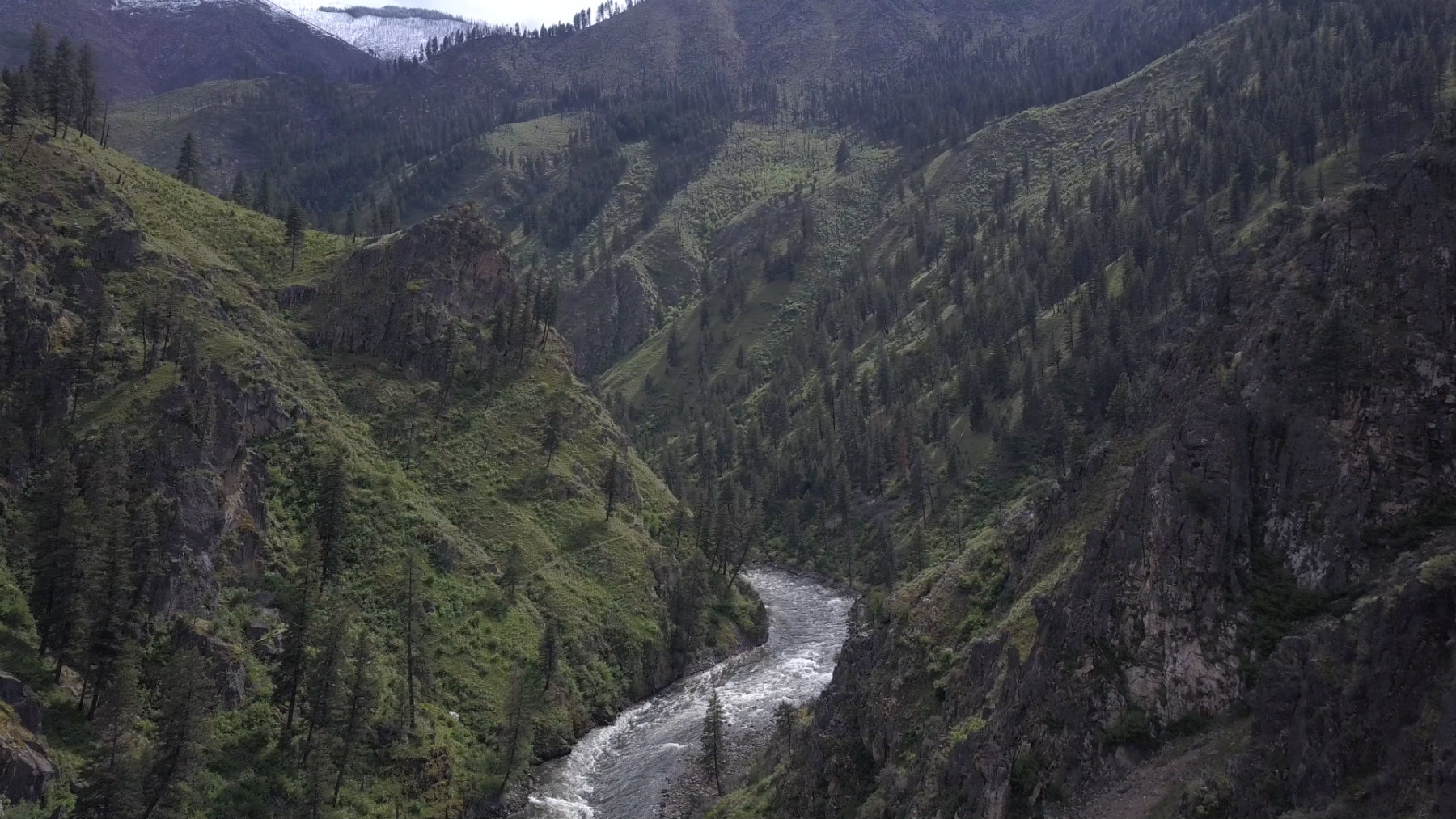 My first multi-day kayak trip was on the South Fork Salmon at low rocky flows. I remember pulling on my drysuit in that frosty November morning, after driving over the Lick-Creek Summit the night before with a layer of fresh snow covering the road. To fight the chilly night, we made hot soup in a samovar, a Russian cooking apparatus with a small wood-fired pipe built into it to heat the broth. I was completely out of my element, packing a kayak instead of a raft. I bungeed a fly rod to the outside, thinking I would somehow be able to fish during our 33 miles of slow, mostly flat, boulder-strewn run. Tuff sacks were cam strapped to my grab loops. I didn’t see any other way to possibly fit all of my equipment, including a synthetic, zero-degree sleeping bag into this piece of Tupperware.

The day was long, but the light was certainly not at a surplus. The temps rose only enough to prevent frost from actively forming. I could barely keep this barge straight. My ribs and hands were aching from paddling. I got pinned sideways once. Unheard of at higher flows. We knocked out nearly the entire South Salmon in one day, not uncommon at higher flows, but not a suggested practice at base flow in the winter—for good reason. The remaining 20 miles of flat water the next day gave me some time to reflect on my choices. When we finally arrived to Vinegar Creek and a warm car, I vowed to never come back to the South Salmon again or do another kayak self support for that matter. 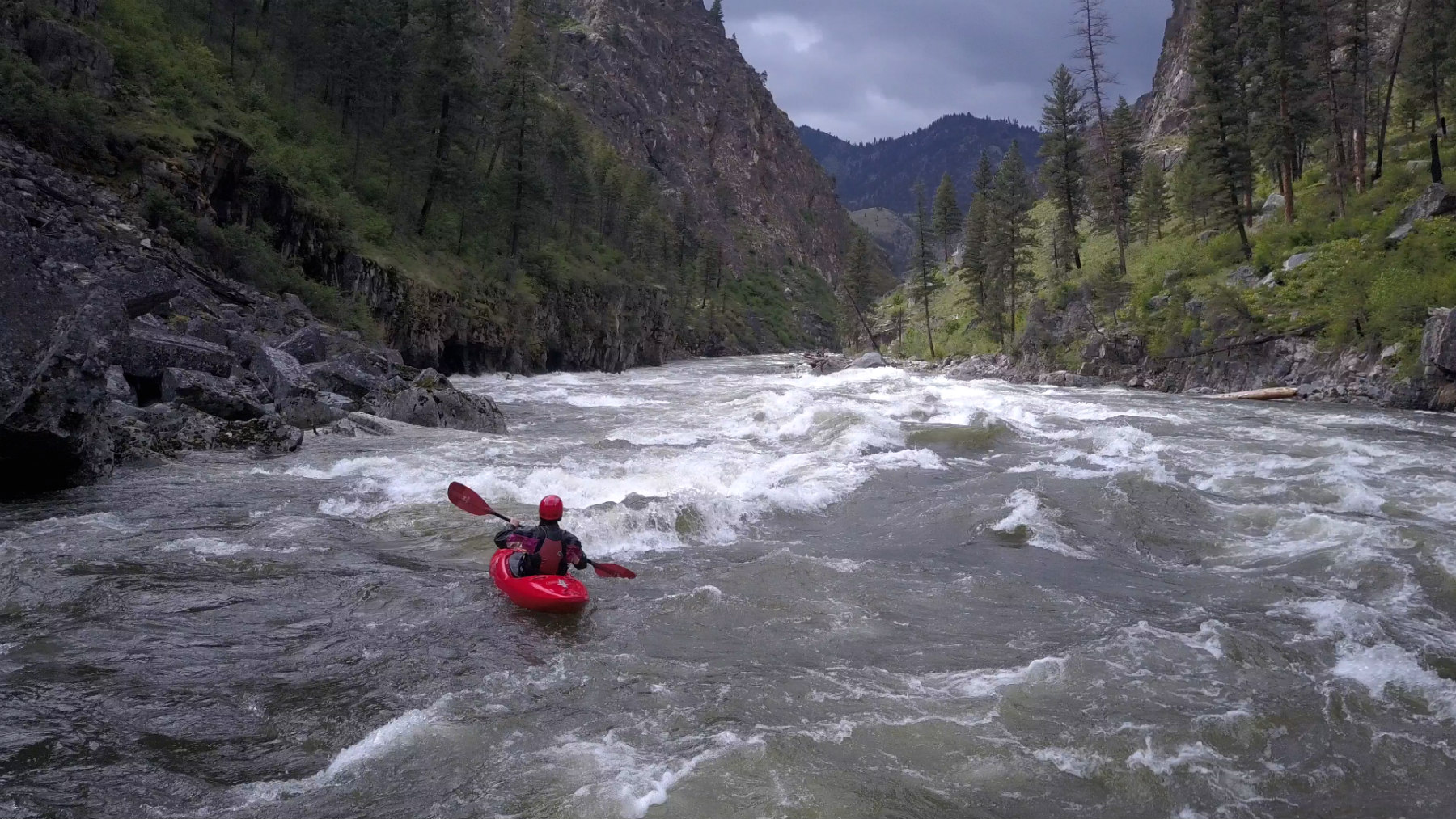 Contrary to my former self’s vows, I make the pilgrimage every spring to paddle the melting snow pack as it rushes to the lowest points of the watershed and swells into one congruent raging flow. Admittedly, I have a larger set of student loans due to this river. Flights from Boston can really start to add up. But at 6.5 feet and rising, the South Salmon unleashed in the spring is arguably the best big water overnighter in the United States and worth every penny I’ll be paying when I’m 45. As the flow drops, the days grow longer and the temperature rises, the river becomes a perfect run for stout rubber boaters looking to conquer what I consider to be the rowdy, whisky-drinking, tattoo-sleeve-wearing, beat-you-up-in-a fight-and-leave-you-asking-for-more Sister of the Middle Fork.

Although we might not realize it, the SF Salmon is a gem in the whitewater culture of Idaho. Wild rivers are synonymous with wilderness. As Idahoans, our culture is rooted in the existence of places like the South Fork, the Selway, the Lochsa, and every other piece of water allowed to run free. The South Fork is a proverbial notch on the belt of every serious whitewater enthusiast, and if it’s not, it should be. The Middle Fork may be the most famous, but the South Fork is just as incredible. Violently beautiful topography wraps the lower section of the river in massive granite cliffs while golden balsamroot blankets the upper end. Anything that puts the quality of this river at risk, makes me raise an eyebrow. 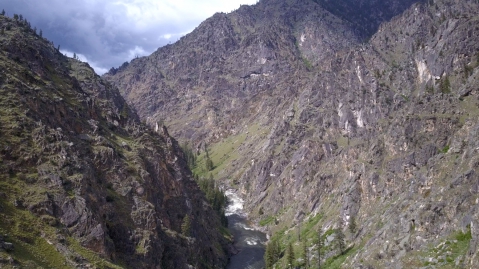 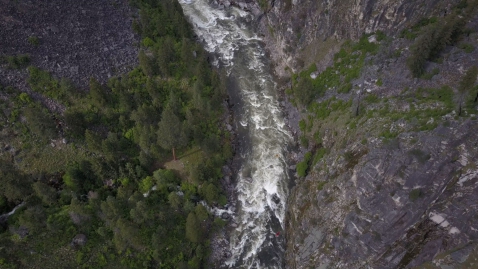 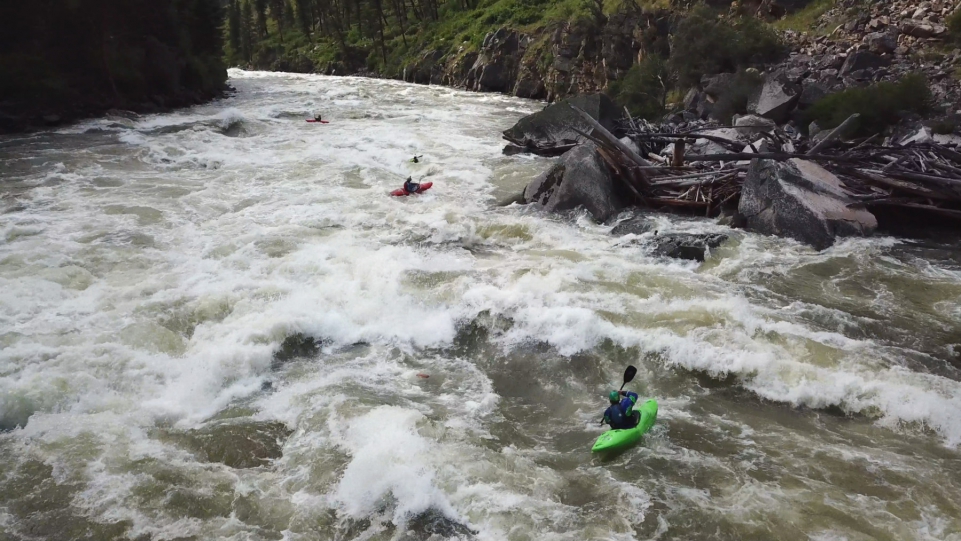 Midas Gold, a massive Canadian mining company, is working to reopen the Stibnite mine at the headwaters of this incredible stretch of river. Stibnite was first mined in the early 1800s but as certain materials became less lucrative, the mine began to slow its operation until the EPA pushed for stringent water quality improvement and it closed, leaving behind a destroyed fish habitat and a weakened ecosystem affecting the downstream towns of Riggins, Lewiston, and Whitebird, not to mention the entire Columbia river corridor. And now, Midas plans to expand the mine, pushing deeper into the mountainside than was previously thought cost-effective or even possible. While another mine may benefit the area in some forms, history shows that one leads to two, and the slope proceeds to steepen from there.

As someone that grew up on the plains of the Snake River, a highly productive agricultural area, it doesn’t take much to see the value of the river’s resource beyond the recreation. However, I’ve also seen the fallout of overusing a resource when solely considered for utilitarian purposes. Similarly, the extractive resource industry in my home state has played an important role in creating much of what is beautiful from the southern plains to the panhandle of the north. The access to some of our wilderness playgrounds is maintained solely for the purpose of allowing extractive resources to sustain. 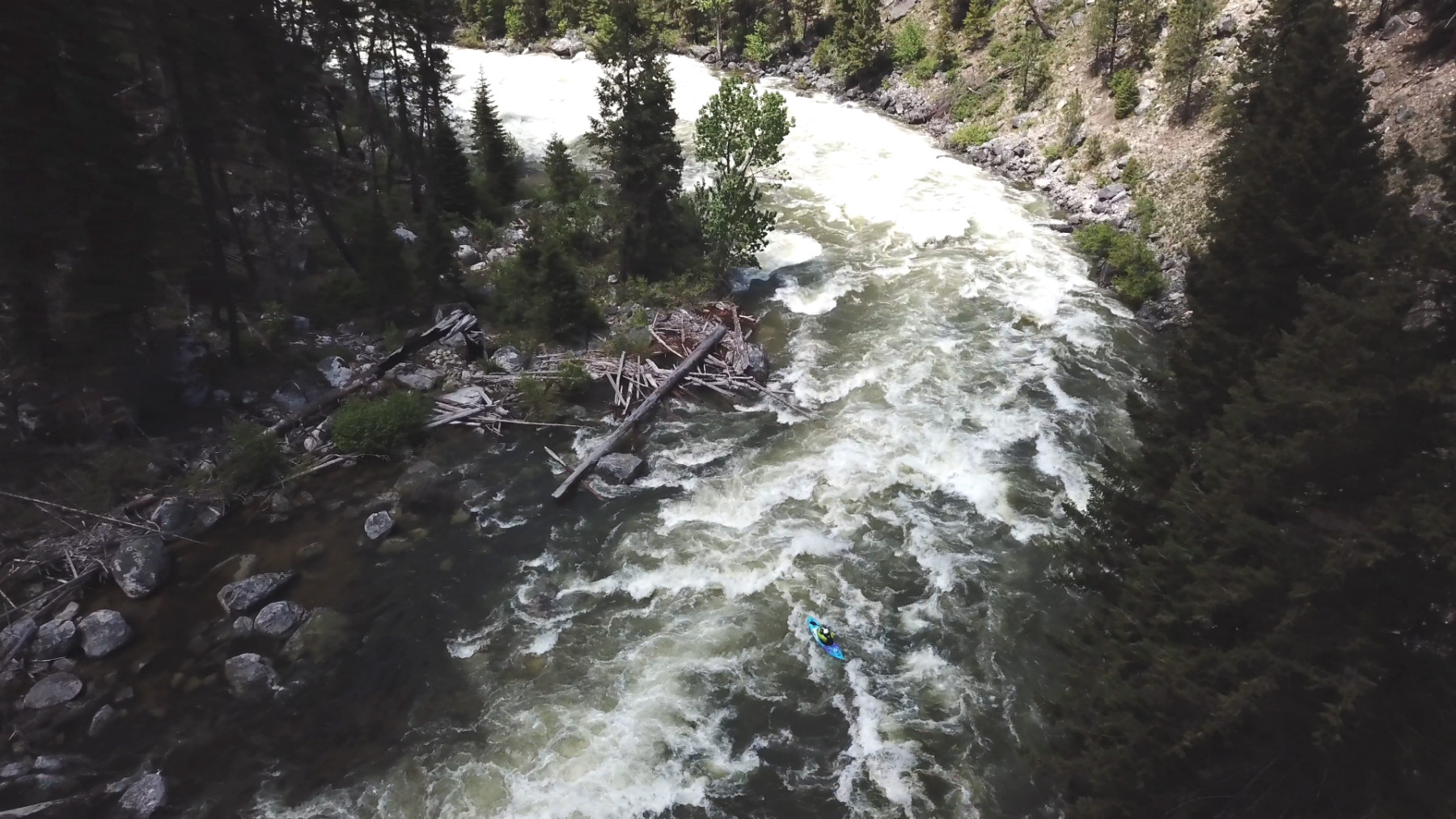 It would be hypocritical as a member of the whitewater community to not recognize the importance of such industries and their relationships with the landscape. It’s easy to forget about the resources and energy required in order to access our most valued of places. As a society, and more narrowly, as Idahoans and lovers of the Whitewater State, we need to take a hard look at our values and what it is we’re willing to risk when it comes to gambling with the places we love.

This past spring, I read article after article from both sides of the coin. Midas’s proposal to its stakeholder explains how this investment would make them significant dividends. But to the most stringent of conservation groups, the Stibnite mine at the headwaters of the South Fork Salmon is anything but a clean cut issue. An influx of jobs lies to one side; it takes a lot of hands to expand an open-pit mine. Loss of wilderness and possible further negative impact on water quality lies on the other. I was lost as to how I could raise community awareness, interaction and input. Three things mining companies hate. Historically, extractive mining for gold and stibnite has led the watershed and its aquatic ecosystems to the brink of survival, making the water almost uninhabitable for most fish species, a resource in its own right that has far-reaching impacts on the surrounding wilderness, including forestry and hunting resources. 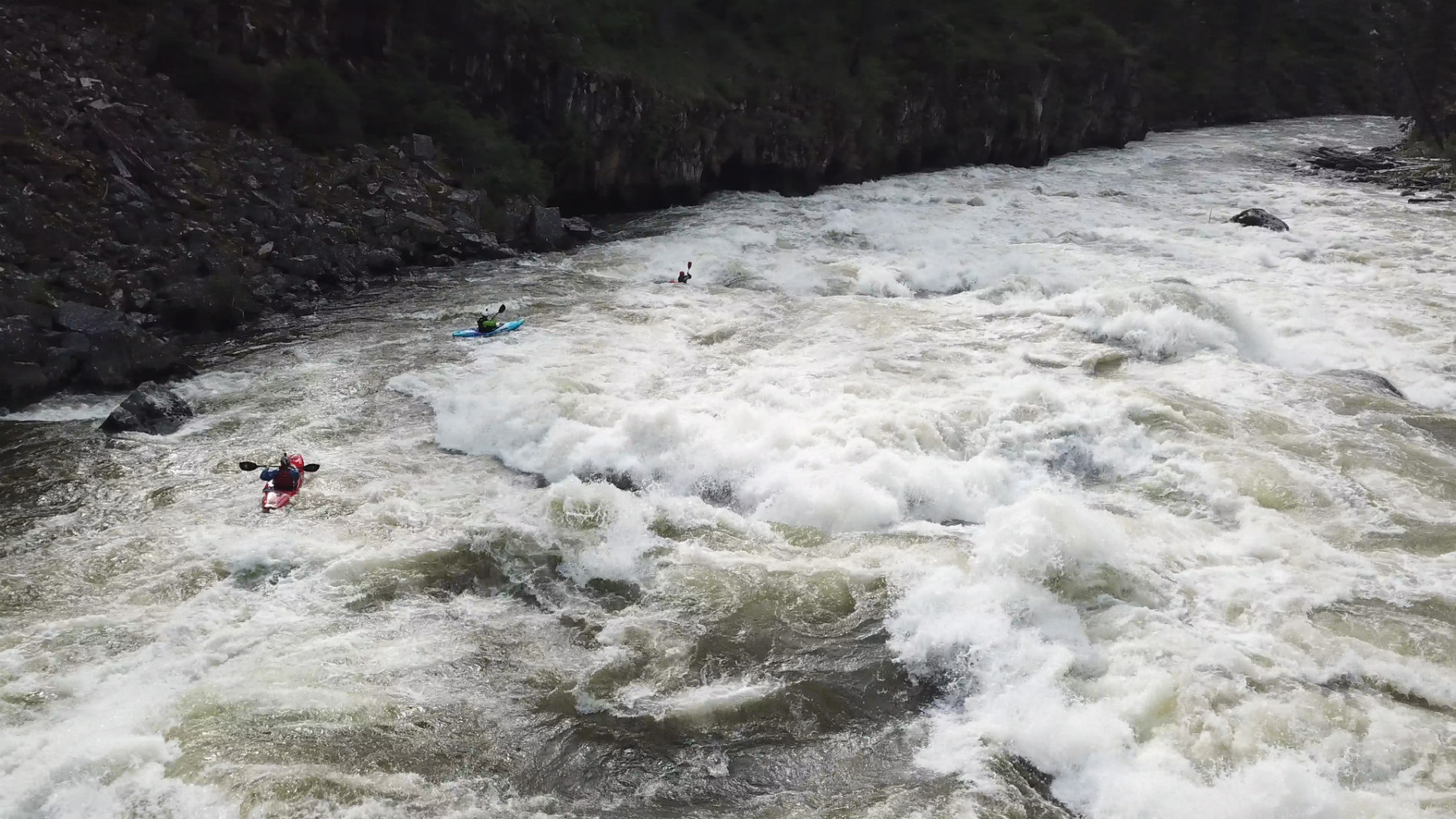 Nothing would do to quell my unrest except for journeying into the backcountry to chat with locals and paddle with a group of people that share a similar passion for wild places like this. Making a point to speak with the locals of Yellow Pine over a beer, it became apparent to me that they were lukewarm at best about the reopening of the mine. Riding shotgun on a tour of the town in one notable local’s golf cart, I began to understand the history of the area and those that are attracted to the lifestyle of this landscape. And I realized the differences between a bunch of dirtbag kayakers who often sleep in their cars or tents and only bathe in rivers for weeks at a time, are not so great from those that choose to spend their lives surrounded by such wild country.

I wanted so badly to show appreciation for this place, to spread the word about this river that I love so much. In order to save this secret, oxymoronically, I felt like we needed to tell more people about it. How can we protect places, how can we get enough people to fall in love with a landscape if we never share our secrets with others? How can we expect people to be involved and passionate if we don’t share our passion? 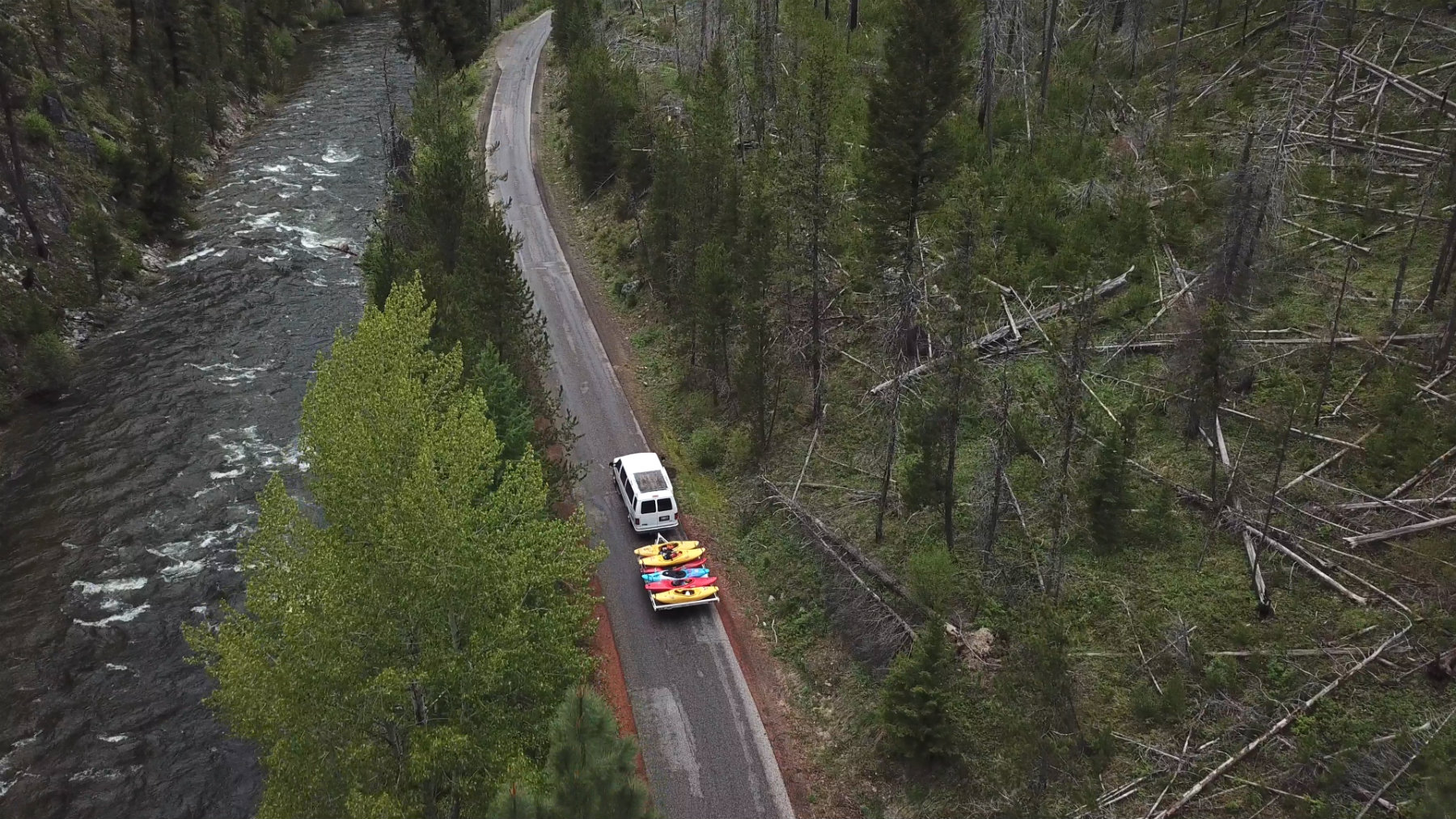 Within 30 minutes of phone calls, I had a dozen people ready to rearrange their schedule to make the trip to Cascade, Idaho. Kayakers from Idaho and other northwest regions and even New Zealanders made it to tee-time in Yellow Pine with cocktails in hand. As we borrowed golf clubs from the corner store, locals warned us of the high flows and dangerous rapids and reminded us of those who had lost their lives to the rivers. However, season after season, tension eases little by little as the scene of kayakers shoving food, hot off the grill, into their faces and swilling cold beers while laughing, become a more common sight at the little towns only café.

The next day, Hayden from Boise, Andrew of Ketchum, Ben out of Hood River and I scouted up and down the quarter-mile long section of ‘Flight Simulator’ as the morning coffee seemed to accelerate its diuretic effects on my GI system. (Funny how that works.) The rest of the crew, peppered with working-class Boise locals and accomplished expedition kayakers, offered moral support and as much safety as possible. After lacing between large holes and finally eddying out at the bottom, feeling as if I had just sprinted on a treadmill for a half hour, the four of us embraced, high fived, yipped, and celebrated in a way that only comes after surviving something intense, adrenaline-fueled and as pure as simply riding chaos downhill. This was the first of many incredible big water rapids that we encountered over the next three days. 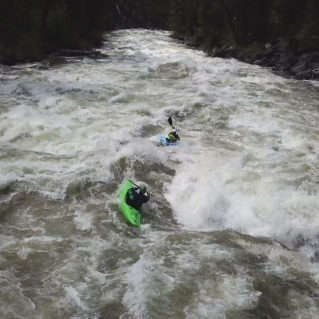 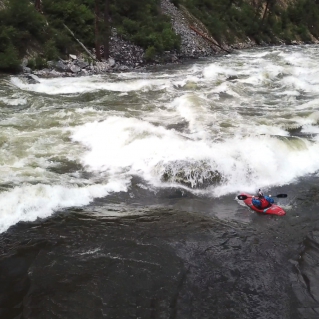 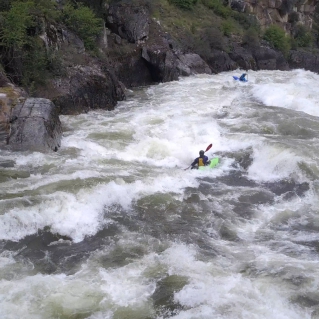 Yes, the rapids are amazing, but the camaraderie shared between the team of paddlers, floating through this place, where Native American’s have left pictographs as proof of their existence, is something special. We certainly aren’t the first nomadic culture to have found the value of the South Fork. Even in my home state it only takes a couple of hours to disappear into the backcountry.

Sitting around the fire after night one, trading stories and sharing laughter, reminded me how trips into places like this break down barriers between individuals more quickly than any other experience I have found. Watching Hayden trying to set up his tent during his first kayak self-support—a treat to himself after graduating from high school only days earlier—with minor struggle, not only made me laugh but made me appreciate the struggles and memories that should continue to be made in places like this during adventures with friends.

The value in this place is measured in far more than what simply lies beneath its soil. Putting a price on the South Fork Salmon is unquantifiable. What is the intangible value of a place such as this? The answer lies somewhere in the way that every person on this trip was willing to drop everything, drive through the night and hop in the van.

Sometimes the best way to protect a secret is to tell the whole world about it.
Shred for the South Fork, a film by Andrew Dunning