I used to boat with a fellow who had this sign in his office: “Rafting isn’t a matter of life or death; it’s much more important than that.”

I could identify with that. From when I first pushed off into a whitewater river, now over 40 years ago, I was hooked. I threw myself wholeheartedly into the sport; it became part of my identity and a focus of my spare time. Passion.

I felt honored to recently spend three days on Oregon’s Rogue River with a group of people who have that kind of passion about river running, although a few didn’t know the passion existed until they floated the Rogue. 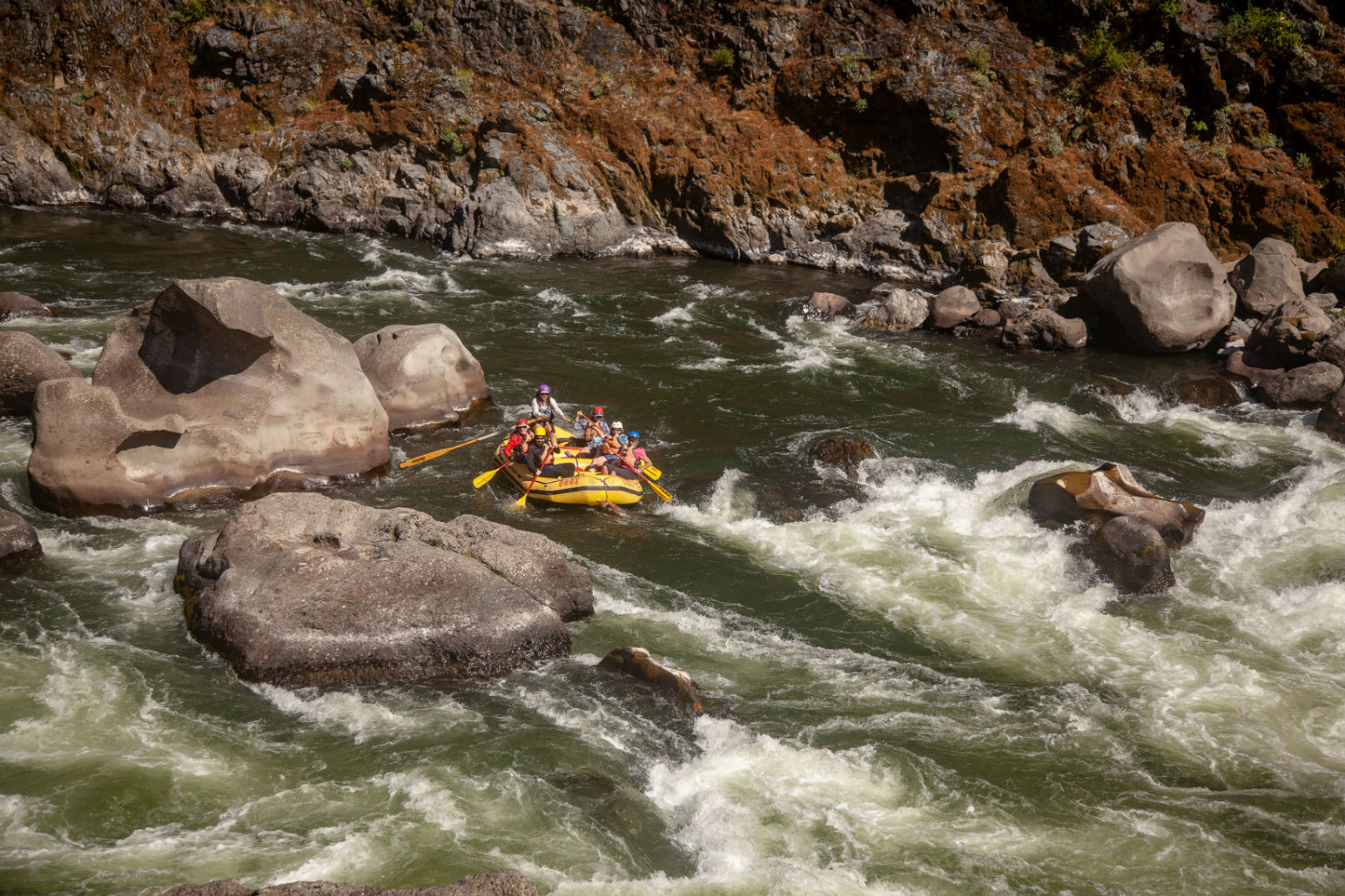 This year is the 50th Anniversary of the Wild & Scenic Rivers Act. Senator Frank Church of Idaho sponsored the Act and on October 2, 1968, President Johnson signed it.

As of now, the Act protects 12,734 river miles. That’s great and impressive, at least until you consider that this protection applies to only 0.35% of our rivers.  More rivers need protection!

As part of the 5,000 Miles of Wild campaign, O.A.R.S. put together a trip on the Grave Creek/Foster Bar section of the Rogue for people working on river protection issues. Our trip goals were not only to celebrate the 50th anniversary but also to discuss the campaign and brainstorm ways of protecting rivers and the ecosystems they support. Since it was one of the original eight river sections protected under the Act, the Rogue was a perfect place for the “meeting.” 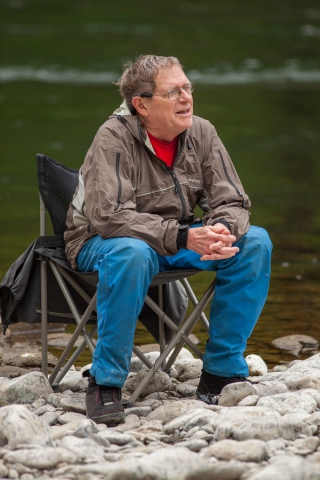 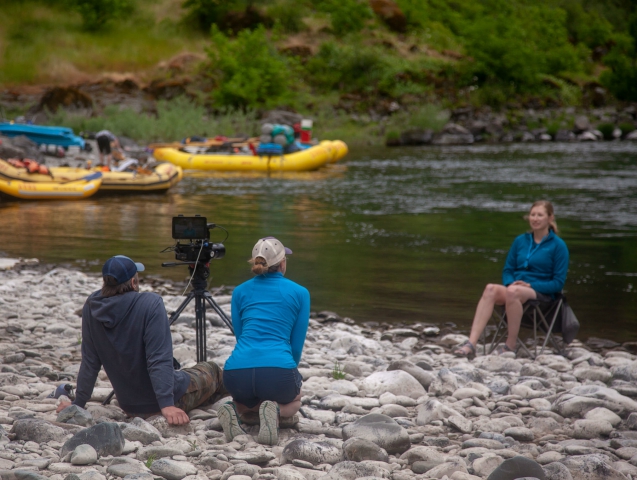 And on top of that, I shared rafts with Scott Cordner, a conservation and landscape photographer, Susan Hauser, a freelance writer, and Eric Tegethoff, a reporter with Oregon News Service.

Not everyone on the trip was a boater, but I was impressed at the willingness of the inexperienced to jump in the IKs and give it a go. Ten years ago Susan had a near drowning experience on the Rogue, but she was one of the first to jump in an IK. This is part of what this trip was all about.

The O.A.R.S. crew was outstanding! Lead guide Kate Wollney having spent 25 years on the Rogue, knew all its moods and secrets. Andy Errickson migrated west to the Rogue from guiding Southeast rivers. After guiding the Rogue for several seasons, Jake Hutcherson was preparing to take his environmental biology degree on to law school. And Mike Cookerly was rowing his first Rogue trip, on loan from O.A.R.S. operations in California. 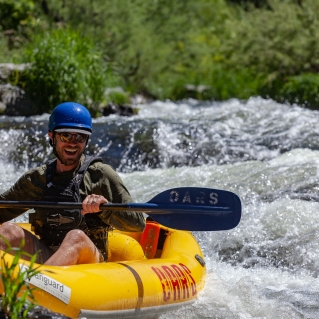 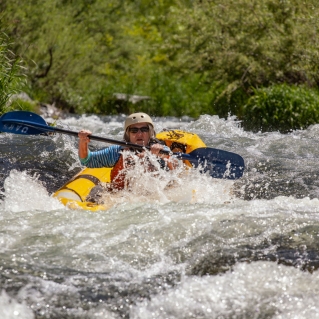 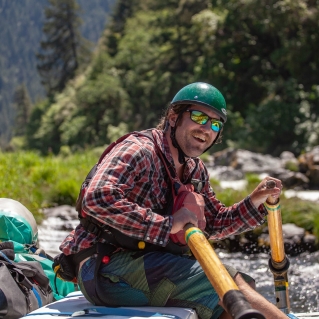 I spent most of the on-the-water time in the paddle raft (a beautiful yellow NRS E-140), usually guided by Kate from a stern rowing frame. I started my rafting in paddle boats; it was fun to return to that shared river-running experience. And it was so cool, and inspiring, listening to the crew discuss river protection and strategies, between bouts of Kate’s paddle commands. Folks were from all over the country, so although some issues had regional significance, most have common themes like watershed degradation, pollution, overdevelopment and government indifference. 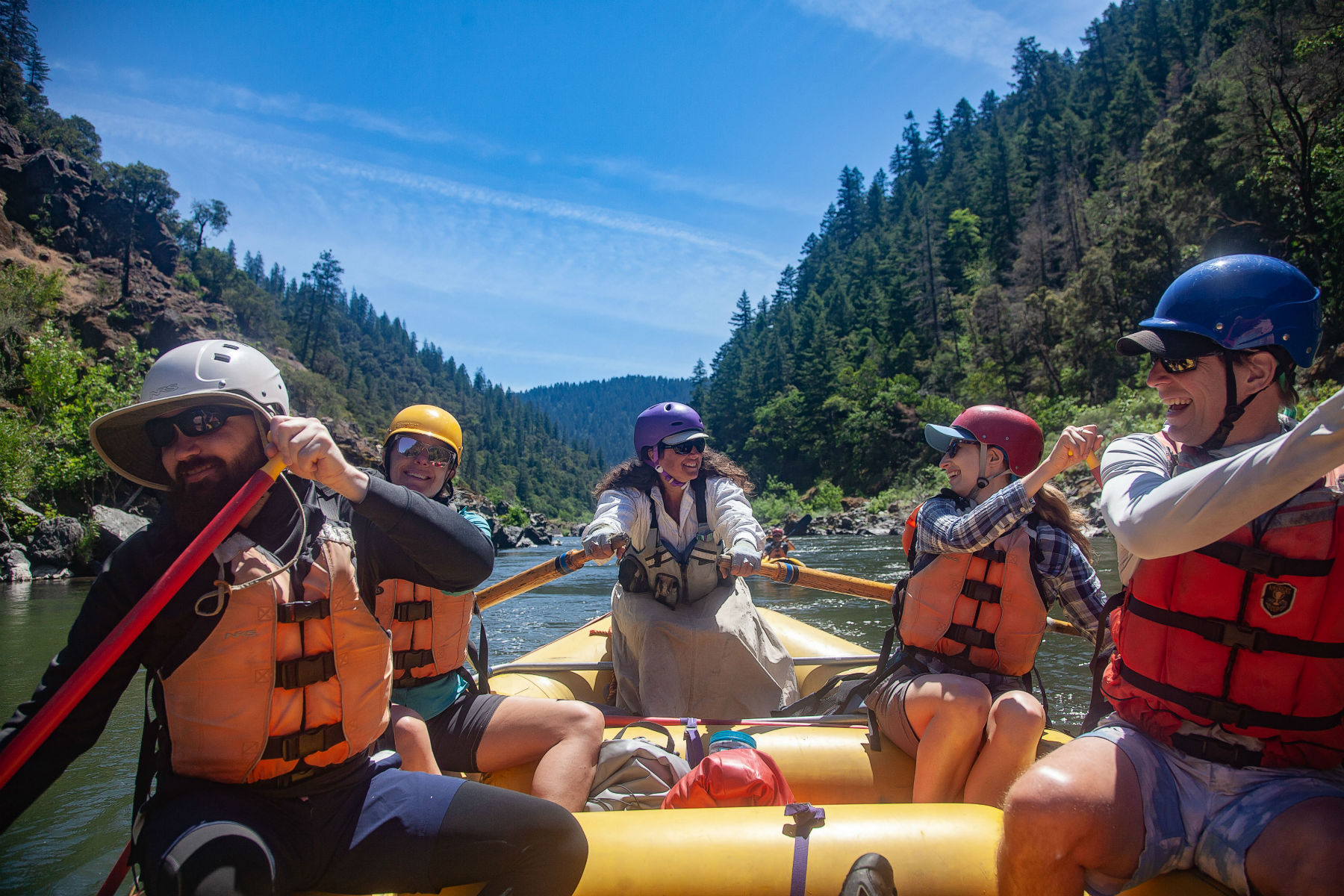 At one point someone asked about “half-pounders,” immature Steelhead that return early to rivers in southern Oregon and northern California. They called the question to Native Fish Society’s Jake Crawford, in one of the IKs. He circled the raft as he talked, breaking away when we got into whitewater, returning to deliver a graduate-level seminar that was at once educational and hilarious, given the lecture hall.

And then Jake told us about his wedding. Turns out, there wasn’t much to say about the ceremony—I got a kick out of that. They had a small ceremony, then spent the money they saved traveling through Patagonia for a month rafting those big-water rivers and hiking the spectacular vistas. I told him he better hang onto that lady; she’s got her priorities in order. 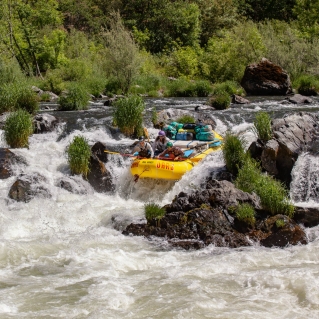 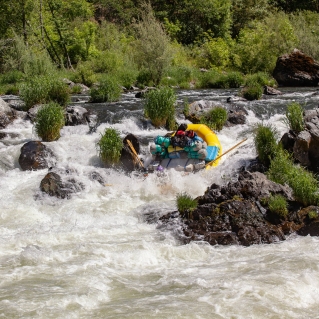 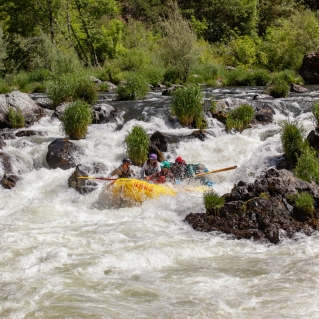 Networking and sharing continued once we got to camp. Plans were made, meetings set up, successes and failures were detailed. We formed new alliances and generated fresh energy.

Of course, it wasn’t all studious pursuits, this was after all a river trip. The guides served delicious food morning, noon and night. We consumed beer and wine, told jokes over booming laughter.

Not all the comradery took place on the river and in camp. A steep “Class IV” side hike up Dulog Creek, over boulders and fallen trees, brought us to a beautiful waterfall. Another scramble up Tate Creek let the more adventurous slide down a steep rock ledge into a deep pool. 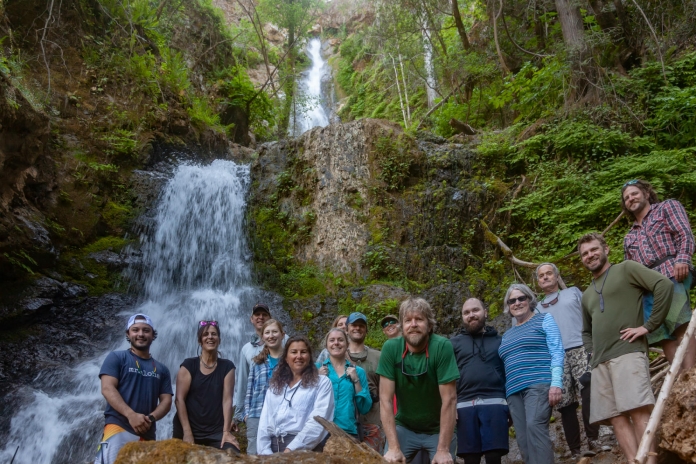 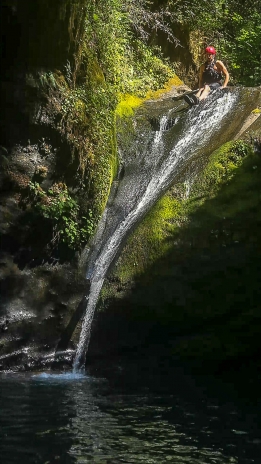 One of the most powerful experiences for me happened at Blossom Bar, a signature Rogue rapid. Kate, intent on monitoring the safe passage of the boats, skillfully maneuvered the paddle raft behind what she called “Picture Rock,” right in the middle of the rapid. With only occasional paddle strokes we kept the raft securely in the eddy behind the rock. This put me on eye level with the river surface, with water roaring by on either side of the rock.

When running a rapid you usually have mere seconds to feel the river’s power. Here, we sat for several minutes in the calm eye of the maelstrom, feeling that unrelenting rush to the sea. I was mesmerized, pulse elevated, just absorbing that wild energy.

I’ve often said that multiday river trips are the greatest places for bonding a group together. You’re all experiencing the same wonders and tensions. There are no electronic distractions. You’re all working together toward common goals. Confidences and bios are easily shared.

After the trip, Nicole Silk, President of River Network, spelled it out perfectly. “It is uncommon in today’s busy world to bring together those of us who share our passion for adventure, wild places, equality of access, and river conservation. The conversations we had about the Wild and Scenic Rivers Act, protection for the Rogue River, and the power of nature and our rivers to heal and inspire left me with a deeper connection to why what we all do is so very important. And, profound gratitude for the dedication of the conservation and river running community.” 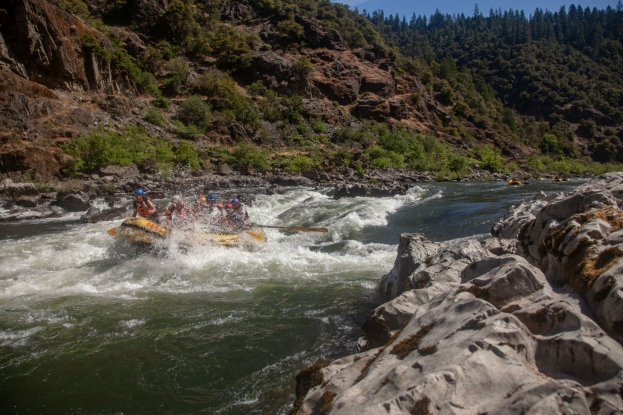 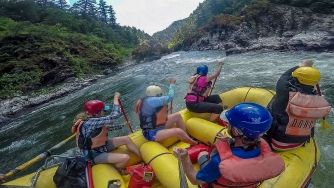 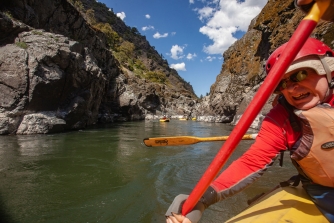 So, this section of the Rogue is protected. However, not all of its tributaries are. And remember, the Wild & Scenic Rivers Act only protects a quarter-mile strip along each bank. As you navigate a protected section, often parts of the viewshed are outside the Act’s protection.

As population increases and climate changes, we’re placing more demands on the waters of the nation and the ecosystems they feed. These rivers aren’t just where we recreate, they also nurture the fish and other creatures that depend on them. They are sources for the water we drink, that grows our food, that powers our industries and jobs. 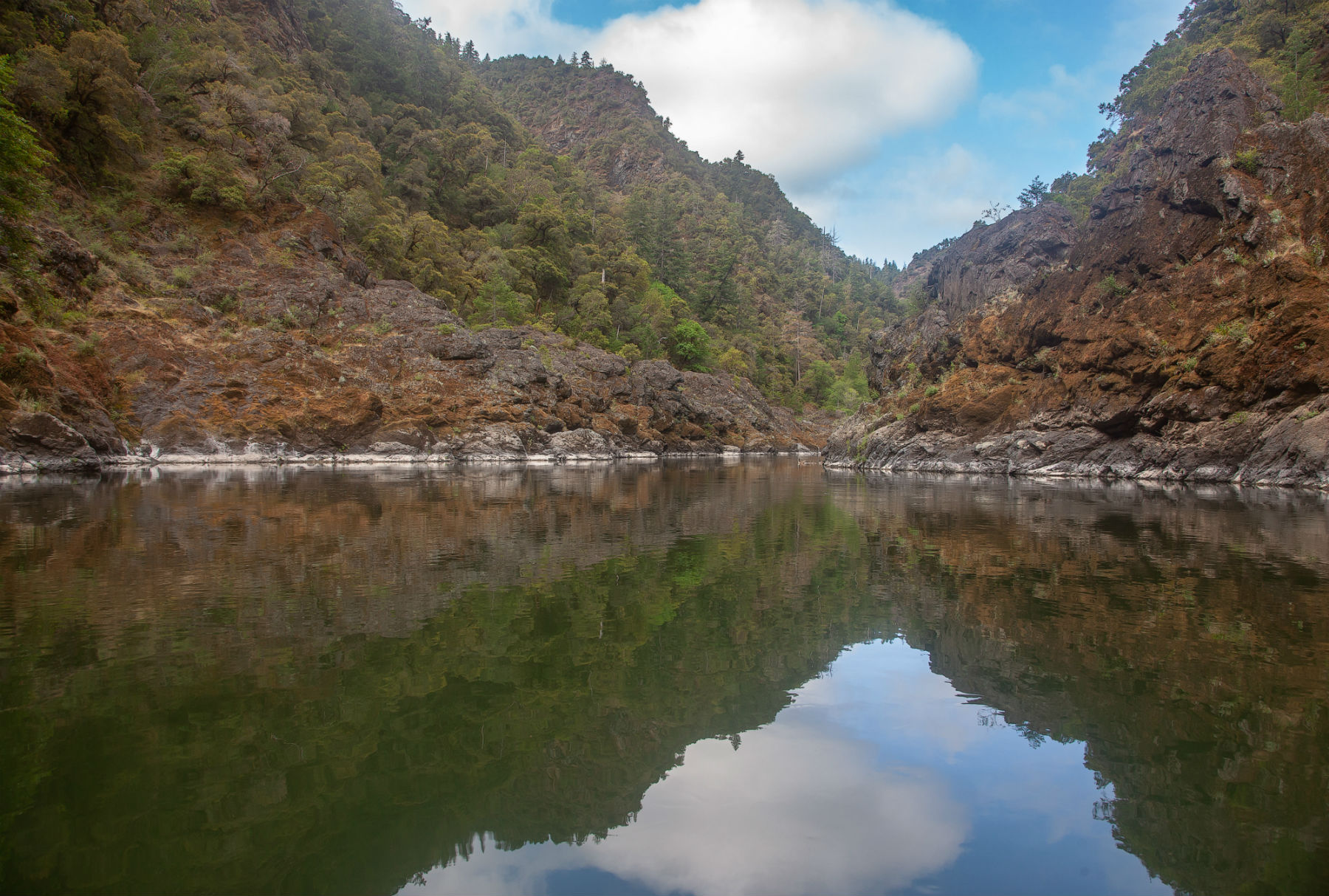 If you aren’t sure how to help, start by getting involved at your local level. Check out the 5,000 Miles of Wild Campaign. Contact the organizations linked above; find out what you can do to help foster clean water and healthy ecosystems in the rivers and streams you love.

If you’re passionate about boating, share that passion with the waters you recreate on. The rivers need your passion!