It’s often said that social media isolates people, which I have to disagree with. For the paddling and outdoors community, I think it can connect, inspire, and motivate us. Over the years, friendships forged over social channels have taken me to remote locations (or at least remote to me). Thanks to these friendships I’ve had the chance to explore isolated destinations with gracious hosts who simply consider these places their backyards.

From the moment my wife and I picked up paddling as a regular occurrence, the Lofoten Islands in Norway became a place I had to explore by sea kayak. Anytime I came across photos taken by Tomasz Furmanek or incredible expedition shots by Kristoffer Vandbakk the surreal fjords awed me. In addition to their stunning documentation of Norwegian landscapes and waterscapes, Tomasz and Kristoffer’s skills behind a camera as well as in a kayak inspired me to push my own skills. I added Norway, and in particular Lofoten, to my ever-growing list of dream paddling destinations. 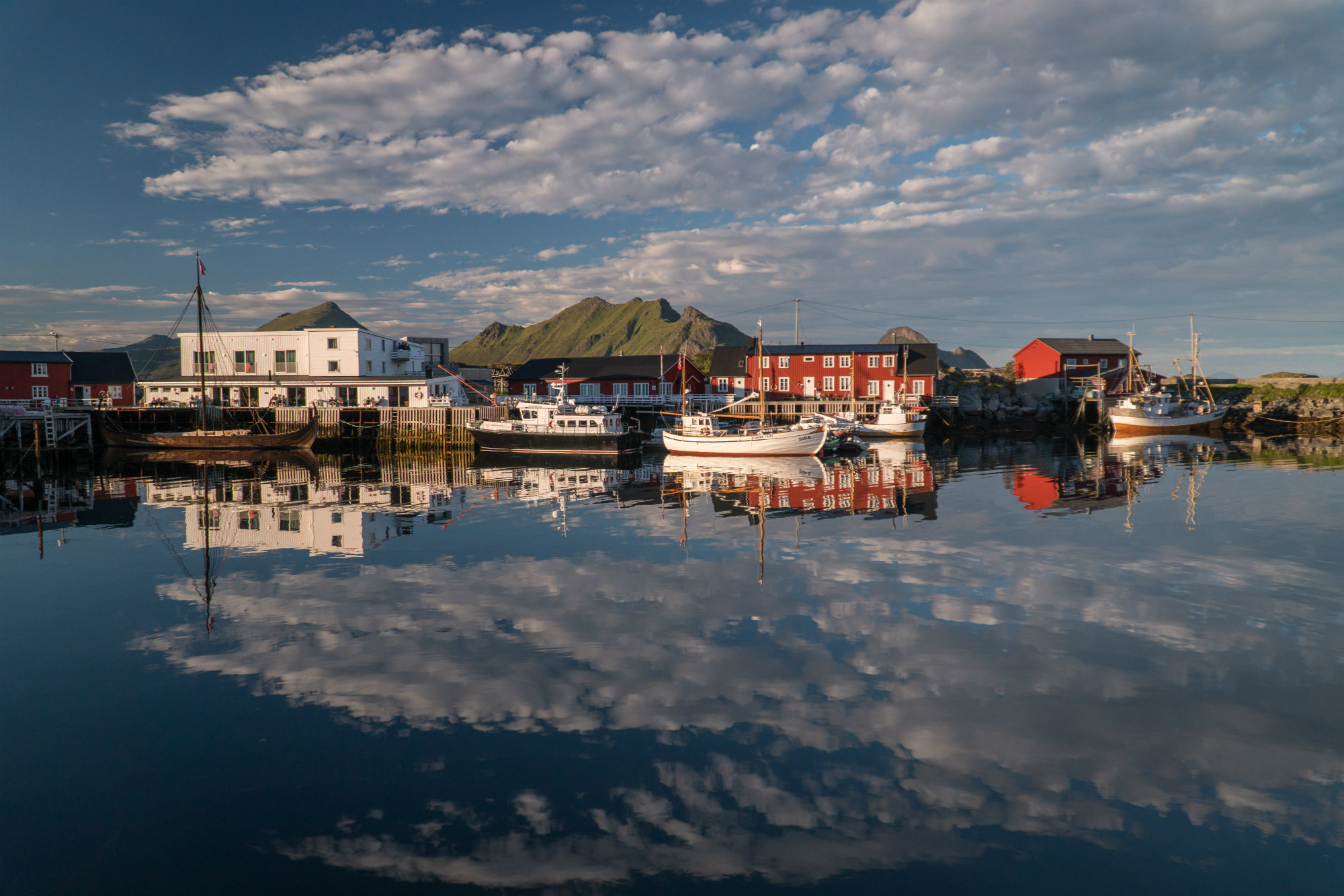 It didn’t take long before my wife and I found ourselves exploring some of these very locations. With the help of Tomasz, Kristoffer and many other Norwegian paddlers, we organized a one-way trip from Oslo to Trondheim to meet and paddle with many of them along the way. And while this might have been one of the best trips of our lives, it sadly didn’t tick the “Lofoten” box on my list… So, when Kristoffer reached out later in the year to let me know he’d be leading his fifth circumnavigation of Moskenes Island, I immediately jumped in.

Moskenes is the southernmost island in Lofoten. While its east coast is sparsely populated and offers several sheltered areas to paddle, its west coast is exposed, raw and isolated, making it a stunning stretch to explore. At the same time, if the weather doesn’t cooperate, a group circumnavigation can prove extremely challenging. Therefore, we had many possible plans and routes that would allow us to get the most out of our time. 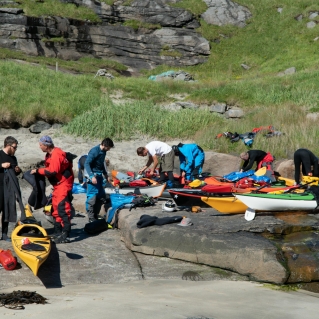 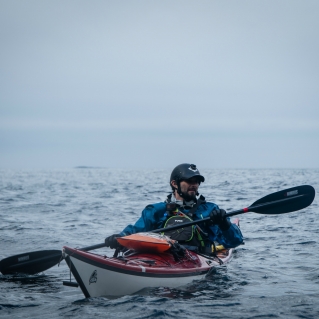 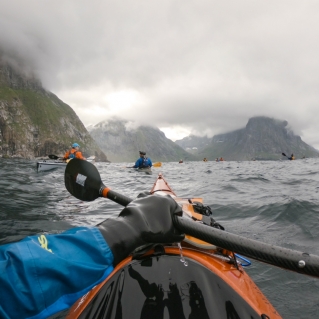 We planned to circumnavigate Moskenes in five days of paddling, with favorable weather for a counter-clockwise route. Eleven paddlers from many different nations made up our group. We were all ready for the challenge. Matt Skuse, a former Mountain Leader in the British Royal Marines, with extensive experience in remote and challenging wilderness environments joined Kristoffer to lead our trip. I had met Matt on my previous Norway trip, and delightfully looked forward to spending several days under his guidance. Both Kristoffer and Matt are not only avid kayakers and coaches, but also very passionate about respecting the outdoors and practicing leave no trace principles. I was sure we’d learn a lot on and off the water.

My buddy, kayaker and photographer Jorge Guillot came along as well. Jorge had accompanied me on many trips in the past, so when I proposed this Arctic Circle adventure, it didn’t take much convincing. This also made travel for us a bit easier. We shared camping and paddling equipment, as well as photo and video gear. 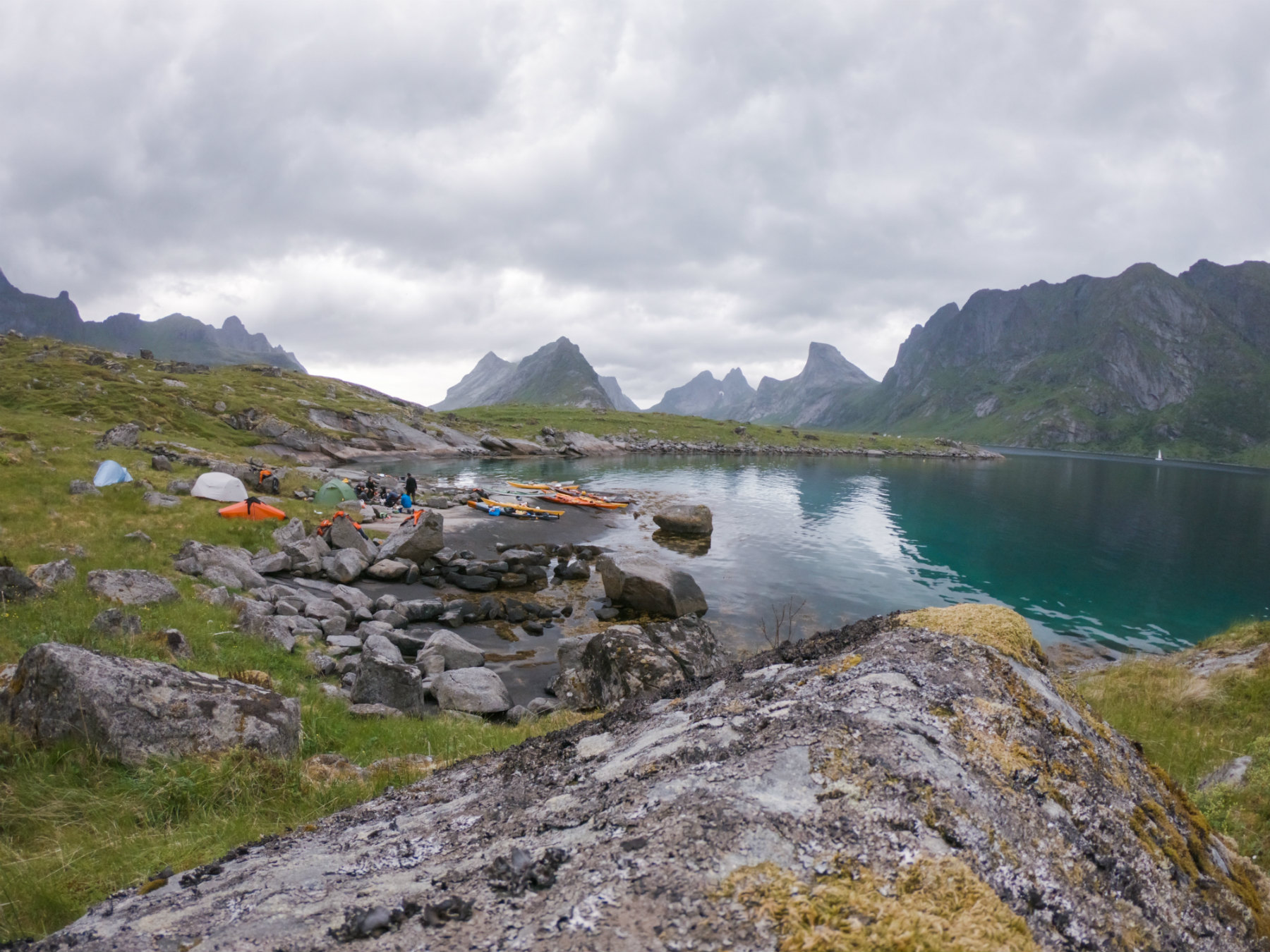 With loaded kayaks and wind at our backs, we set off from Ramberg with two possible stopping points for the day along the start of the western coast. Weather would dictate our progress, but our camp locations were known ahead of time. Moskenes offers several beautiful beaches for stops—but very little between them. Stunning cliffs and unwelcoming rock faces would force us to turn back if conditions didn’t allow us to reach our next camp. Luckily, the island welcomed us with fantastic weather for the duration of the trip.

Another possible obstacle each day was launching and landing in surf. The beaches on the western coast can have quite tricky conditions if the wind and swell align perfectly. And fully loaded, paddlers can’t underestimate extremely heavy kayaks in big surf. But once again, the island smiled upon us with small waves and calm conditions. 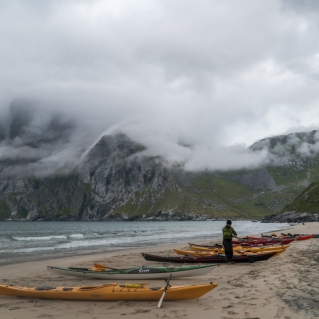 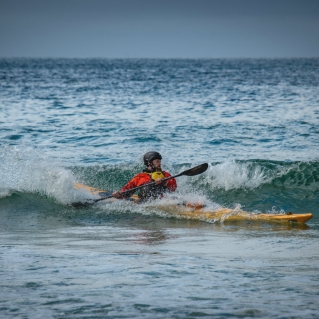 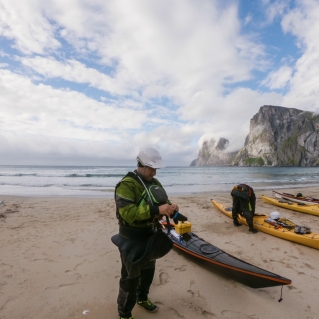 Each day on the west coast proved to be completely different, showing us just how quickly the weather could move in that area. Dense cloud cover, rain, and clear skies came and went in a matter of hours. Eerie views of mountains engulfed in clouds opened up suddenly to show their full height and dwarf our expectations. I was delighted at the chance to see it all, especially when we had a full day and a half of unexpected sun and high temperatures as we made our push toward the southern tip. 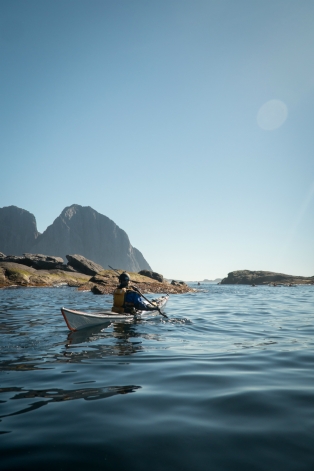 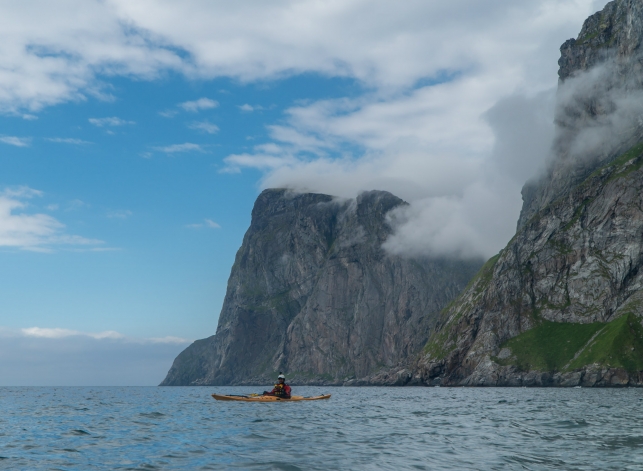 On a clear night, I also experienced something I had never seen before, the midnight sun. It was already strange to have light around the clock, but conditions lined up for us to have a clear view from our camp of the sun as it slowly made its way toward the horizon, only to turn and climb again, an absolutely surreal sight. The constant daylight made timekeeping very tough as well. Some evenings we sat together chatting at camp after dinner, just to realize that although it looked early in the evening, it was actually closer to midnight. 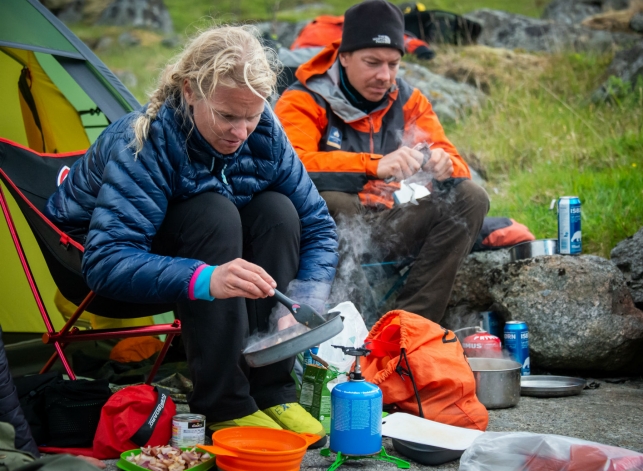 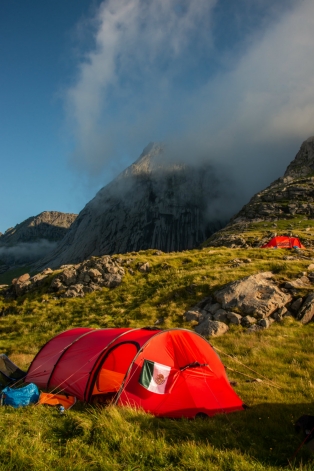 Our luck with conditions continued when we went around the southern tip of the island. The wind direction changed and remained at our backs on the eastern coast, incredibly joined by following seas. (I’m not sure what was offered to the weather gods at the time, but I was extremely thankful.). We spotted several eagles on the way on our way to Reinefjord. Reine is a beautiful fishing village, located at the entrance to the fjord.

Tomasz had taken many photos in Reine. In fact, the entire month leading up to this trip, one particular image from Reinefjord was on his calendar, which I conveniently keep pinned up as inspiration at my desk at work. As we entered Reinefjord, paddling through an archway, this same iconic image suddenly materialized before me. So there I was, floating gently and staring at one of the first views that ever inspired me to paddle remote locations years before. Words escaped me. As the group paddled away, I lined up my kayak and paddle in an attempt to re-create Tomasz’s photo as an homage and a huge thank you. Conditions did not look the same, but that did not matter one bit. 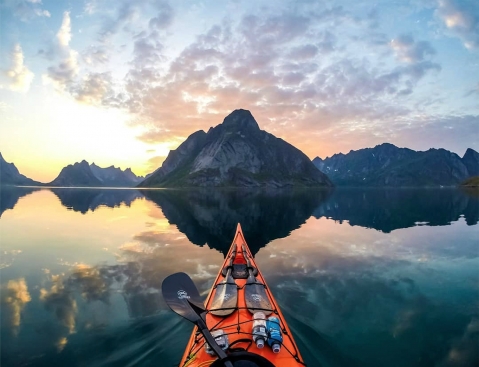 Photo of Riene by Tomasz Furmanek. 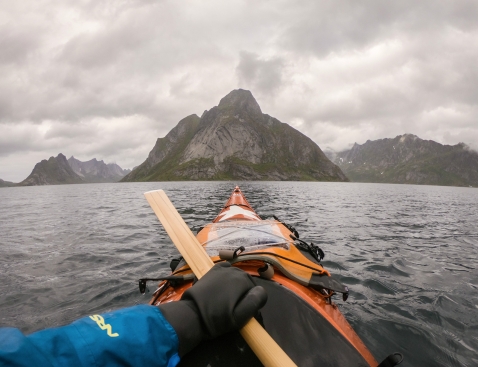 We concluded the circumnavigation the next day without trouble. The group shared sore muscles and smiles as we made our way back to the lodge for a night of celebration, grilled whale and relaxation in a wood-burning hot tub. Once again, the midnight sun tricked us into a final late night of laughter, stories and plans for future trips.

It used to be that in order to have these types of adventures, one had to save up a lot of money, take a leave of absence from work or sometimes wait for a chance between jobs. And while traveling still does not come without its cost, our new age of connectivity allows for the outdoors community to come together in ways never seen before. As one researches a specific dream location, there’s a good chance a local adventurer is doing the same in reverse—waiting and and willing to share their backyards with us. Sometimes all we have to do is reach out.

Editor’s Note: Guest contributor Luke Rovner is an NRS Ambassador, sea kayak instructor and filmmaker. Combining his experience as a photo and video professional with a love for kayaking, he started Kayak Hipster with the goal of capturing outdoor adventures and sharing kayaking tips. Check out his short edit from his Moskenes adventure on YouTube.