What Lies Beneath the Koktuli River

It’s 3:00 AM and we take turns rowing into a headwind somewhere in remote Alaska. We’re lost amongst a giant network of braided channels. Exhausted and covered in bug bites from head to toe, after ten days on the Koktuli River, we’re forced to paddle an unplanned 70 miles of flatwater to an alternative takeout. Stormy winds thwarted our original plan to meet a floatplane at the confluence, but with rations depleting fast, we had to embrace Plan B, pushing our sore bodies back to civilization. Morale dwindles, but our final traces of energy carry us along after one of the most inspiring river trips I’ve ever done.

The Koktuli is a sacred watershed where salmon spawn in peace; moose, bear and other wildlife thrive; and water flows freely as it has since the melt of the last ice age. No roads lead to the put-in and bear spray is mandatory. This river has no formal protection, no wild and scenic designation, and is arguably one of the most endangered watersheds in the United States of America.

Alaska has called to me my whole life. Growing up between northwestern Washington and Jackson Hole, I’ve always heard captivating stories from people who spent their summers fishing or springs skiing in Alaska. When I was 12, I remember reading Dick Proenneke’s Alone in the Wilderness. An account of his wild Alaskan adventures. Desire to explore the iconic mountains and rivers in the land of the midnight sun consumed me ever since.

Over the last four years, I’ve been fortunate enough to fulfill this dream with awe-inspiring kayak first descents and remote ski trips all around the state. With an insatiable appetite for more, in May of 2018, Brendan and I organized a trip to document Coastal Grizzly bears in Katmai National Park. 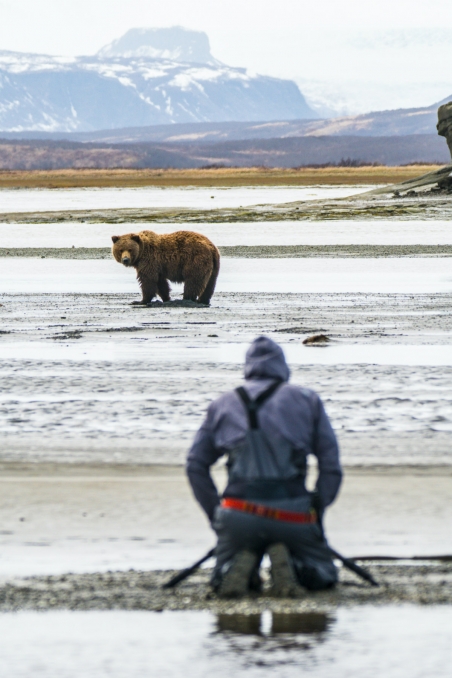 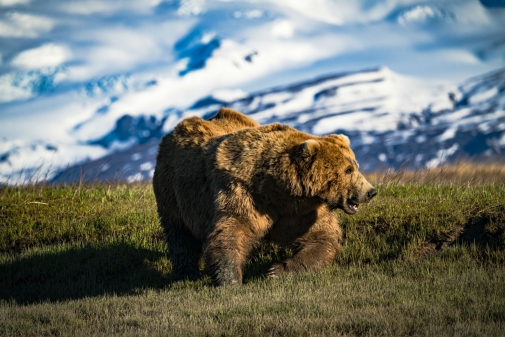 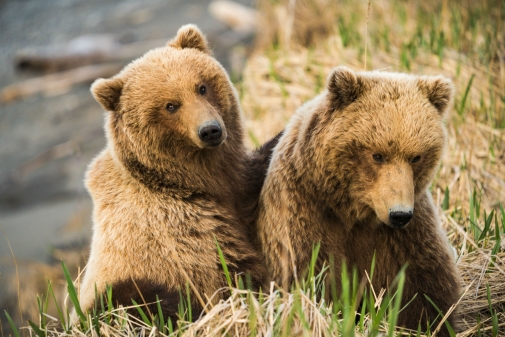 For ten days, we lived among the largest creatures I’ve ever seen. And after we’d archived as much footage of these terrifyingly beautiful beasts, we found ourselves along the banks of Lake Iliamna visiting with Jerry Jacques, a Bristol Bay sport fishing lodge owner, pilot, wildlife expert, and veteran Alaskan kayaker.

He told us stories of first descents, plane crashes and bear attacks with enthusiasm. But a sobering tone replaced his cheery storytelling voice when the topic of the nearby Pebble Mine proposal arose. By the time we concluded the conversation, we’d already made plans for a three-day trip down the Koktuli River, starting in the headwaters where the location of the proposed mine stands.

Outfitted with a ten-foot raft, ammo can to protect our food from bears, and all of our camera equipment, Brendan and I loaded up Jerry’s De Havilland DHC-2 Beaver bush plane. We flew over the turquoise waters of Lake Iliamna and into the hills. Several minutes later we broke through the clouds, flying over Frying Pan Lake, the headwaters of the Koktuli. The floats of the plane skipped across the choppy waters and landed on a sandy beach.

A constant drone of helicopters in the distance soundtracked our afternoon as we unloaded our gear. The helicopters were delivering supplies to the proposed mine site. What would happen next was unsure. Frying Pan Lake feeds into a low volume, “schwhacky” stretch of river riddled with beaver dams. With tentative plans for a pick-up roughly 30 miles downstream, we said goodbye to Jerry. Paddling began with a quick squall and a mean headwind, stalling our progress crossing the lake. The three-hour sufferfest convinced us to set up camp and spend the afternoon exploring and documenting the headwaters of the Koktuli. 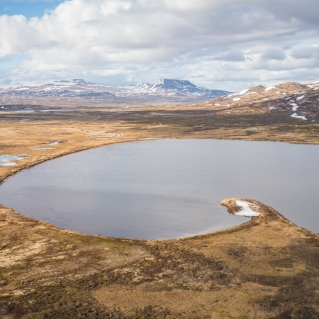 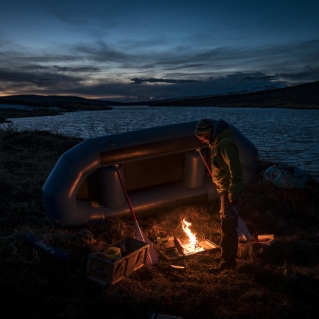 Night one on the Koktuli. 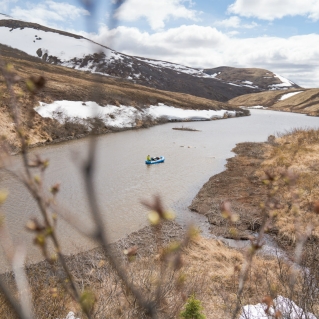 Paddling from Frying Pan Lake and into the Koktuli.

The following morning, we set off downstream with no goals or destination. Like most of our ‘expeditions’, our destination is the journey itself and as it turned out this journey would not be as easy as we first thought. Immediately, the river’s low volume had us scraping over rocks, crashing through alders, and dodging beaver dams. Between the thick patches of alders, the river opened up and began to wrap and bend in a confusing maze meandering through desolate swampland. For 48 hours we scraped, shwhacked, crashed and dodged our way down the Koktuli.

I wouldn’t call the upper Koktuli a “classic Alaskan section” but it’s definitely beautiful in its own Alaskan way. A close encounter with a moose, seemingly as lost as us amongst the infinite marsh, broke up the monotony of the Koktuli’s beginnings. Eventually, several tributaries fed into the Koktuli and this trickle of a stream became a river. 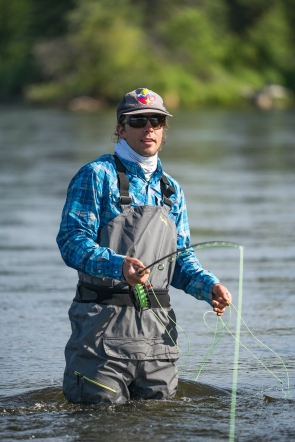 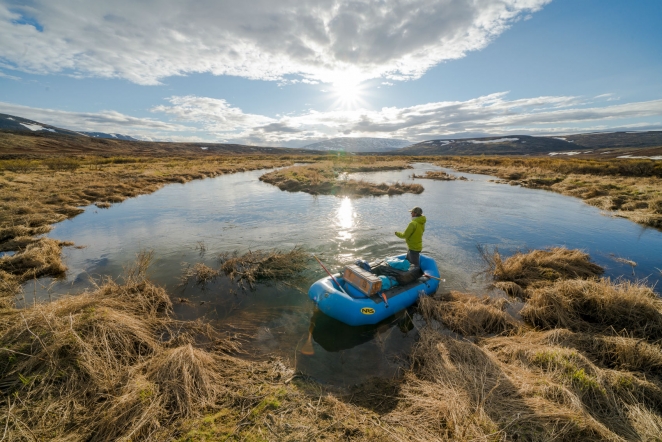 We took out at the put-in of the classic commercial stretch and hiked our gear up to a bumpy runway, which is nothing more than faint ruts on the tundra. The skeleton of a crashed bush plane lay nearby. To pass the time while we waited for Jerry to fly in, Brendan tried his luck at fishing while I dozed off. I woke to a strange feeling. A little disoriented, I scanned my surroundings and stopped at a grizzly bear, maybe 200 feet away but walking directly toward me, narrowing that gap with each strut. Although I’m downwind and he’s unaware of my presence, the surprise element won’t be in my favor. I jolted up, waved my hands, and shouted until he, thankfully, retreated back to where he came from.

Bear attack thwarted and with no bites on the fly, we’re happy to see Jerry’s brilliant blue and gold Piper PA-18 Super Cub coming in for landing. Jerry offers to make a quick detour directly over the Pebble Mine’s headquarters. Minutes later we are doing a low pass over the epicenter of the project. After becoming acquainted with this quiet and peaceful country over the last few days, it felt alienating to be faced with the genesis of what could become the largest mine in the world. I fired off as many photos of the site and the surrounding landscape as I could. It was clear to me that we had unfinished business with the Koktuli and Pebble mine.

Two months later, we were flying back to the Koktuli. This time, we’ve convinced two more friends to join us. Opting to skip the headwaters—that need not be repeated—we headed to the put-in of the commercial stretch with the intentions of paddling the rest of the Koktuli to its confluence with the Mulchatna River. We were blessed with an extended window of sunny weather and a record-breaking sockeye salmon season. Yet, my trip began with a distant memory of draping my rain jacket over a chair back at the lodge, and not stuffing it into my bag. Arguably one of the most important pieces of gear for a midsummer rafting trip in Alaska and yet I knew I had forgotten it as soon as Jerry’s floats inched into the sky. I wondered what else I have forgotten as we begin the half-mile traverse—hauling all of our gear—from the small lake where we landed to the river. 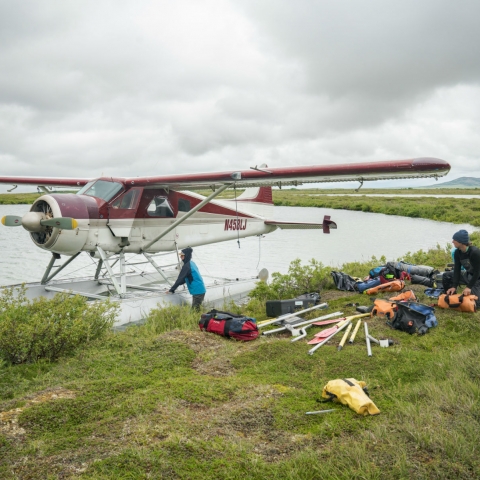 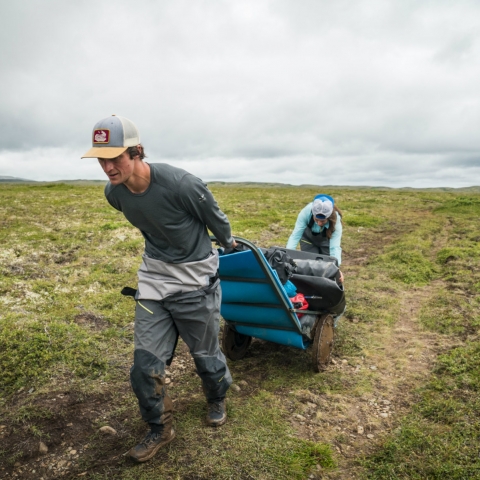 We rewarded our pre-launch efforts with a little fishing. As soon as we could get rods in hands, we cast into the crystal clear waters and—Boom!—first cast and Brendan landed a beautiful Arctic Grayling. We are entering an oasis for fish. Everywhere we looked and cast offered explosions of grayling, salmon, char, dollys and beautiful rainbow trout. 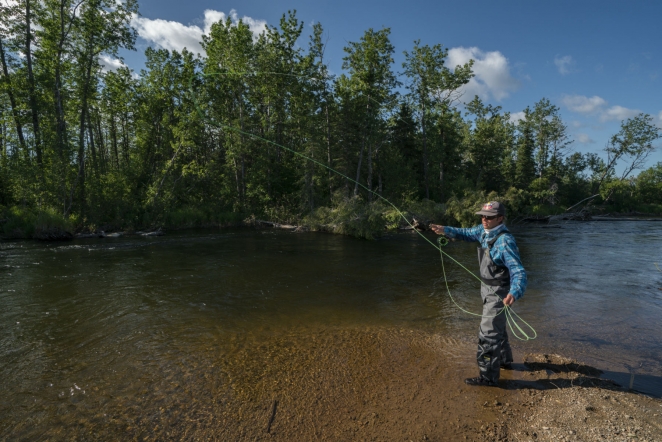 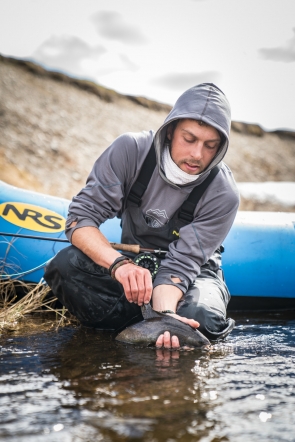 Brendan hooks up an Arctic Grayling.

To get an even closer look, I whipped out a snorkel and mask, a newly acquired piece of gear to my river kit. Upon submersion, I entered a new world. I dove deep into a swirling eddy and discovered a torrent of red sockeye and dog salmon. At first, they were distressed with my presence, but soon they forgot about me, returning to their rituals. Never in my life had I been able to watch fish in such a passive and observant manner. 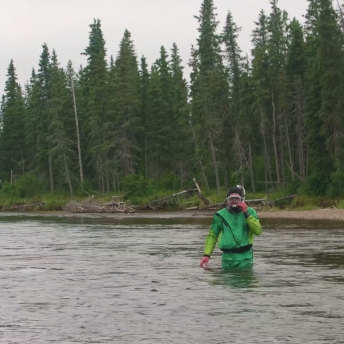 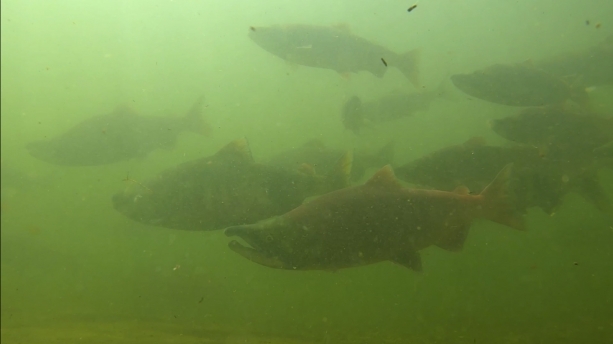 Seconds turned to minutes and minutes turned to hours. I’m obsessed with my new found passion. The rest of the group was eager to get downstream, but I wanted to keep snorkeling. So, I decided to swim ahead of the raft and explore new holes while they rowed. While diving deep in the current I swam right over the biggest fish I had ever seen in my life—a thirty-plus pound king salmon. Its girth blew me away, and all predisposed notions of salmon were shocked into disbelief. Then it happened again, but this time, I was even closer. Another giant king salmon, with a radiant red glow and distinct black spots from head to tail. I watched for as long as I could until the current sucked me downstream.

By then, I was bitterly cold but completely satisfied with my subsurface outing. The sunlight began to fade and a vibrant sunset filled the sky. We pulled over at a nice clearing and begin to set up camp. 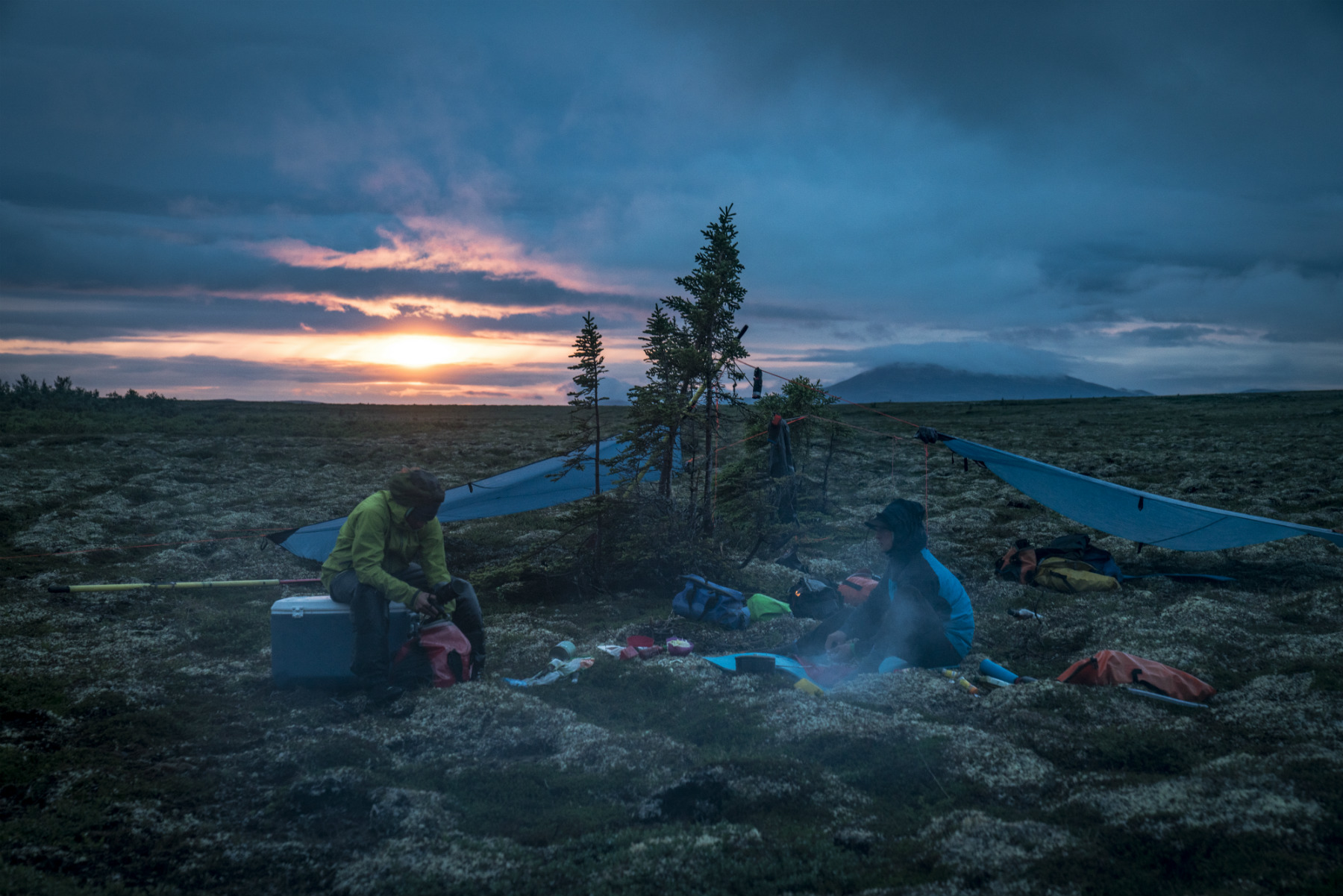 Dozens of trophy of fish, thousands of bug bites, and nine sunny days later we found ourselves nearing the confluence of the Mulchatna River. Despite the great weather and majestic river, we were ready to get out of this bug purgatory and back to civilization. We reached out to Jerry via our satellite phone only to find out it a storm was rolling in and it was going to be too windy for a pickup. In fact, a suitable weather window for landing at the confluence of the Mulchutna wouldn’t occur for several more days. A feeling of desperation overwhelmed the team as we looked at our sparse supplies. Jerry suggested we paddle an additional 70 miles of flat water down to the village of Ekwok. With no alternative, we decided to load up and paddle downstream in one push. No one was happy with the decision, but it was our best option. 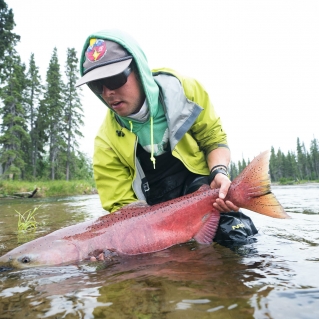 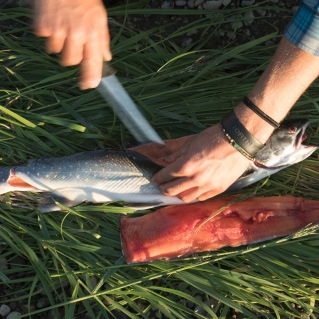 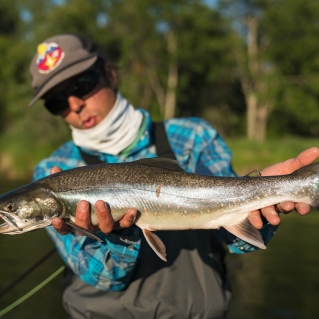 Taking turns rowing, we paddled for fifteen hours into the darkness. Tensions were high and the going was rough. For brief moments we were blessed with a tailwind, in which case we fashioned a macgyver-style sail with tarps to harness nature’s force. The rippling speeds of our sailboat provided a much needed morale boost. As the sun went down, the wind faded, leaving us with nothing but darkness and a maze of back channels to navigate. Few words were shared during the remaining hours of the trip. Only bursts of mumbles and groans about where we should go.

Around 4:00 AM we arrive at the banks of Ekwok completely beat, covered in bug bites, sunburnt, and hungry. We crawl out of our soggy drysuits and into our slightly less soggy sleeping bags. 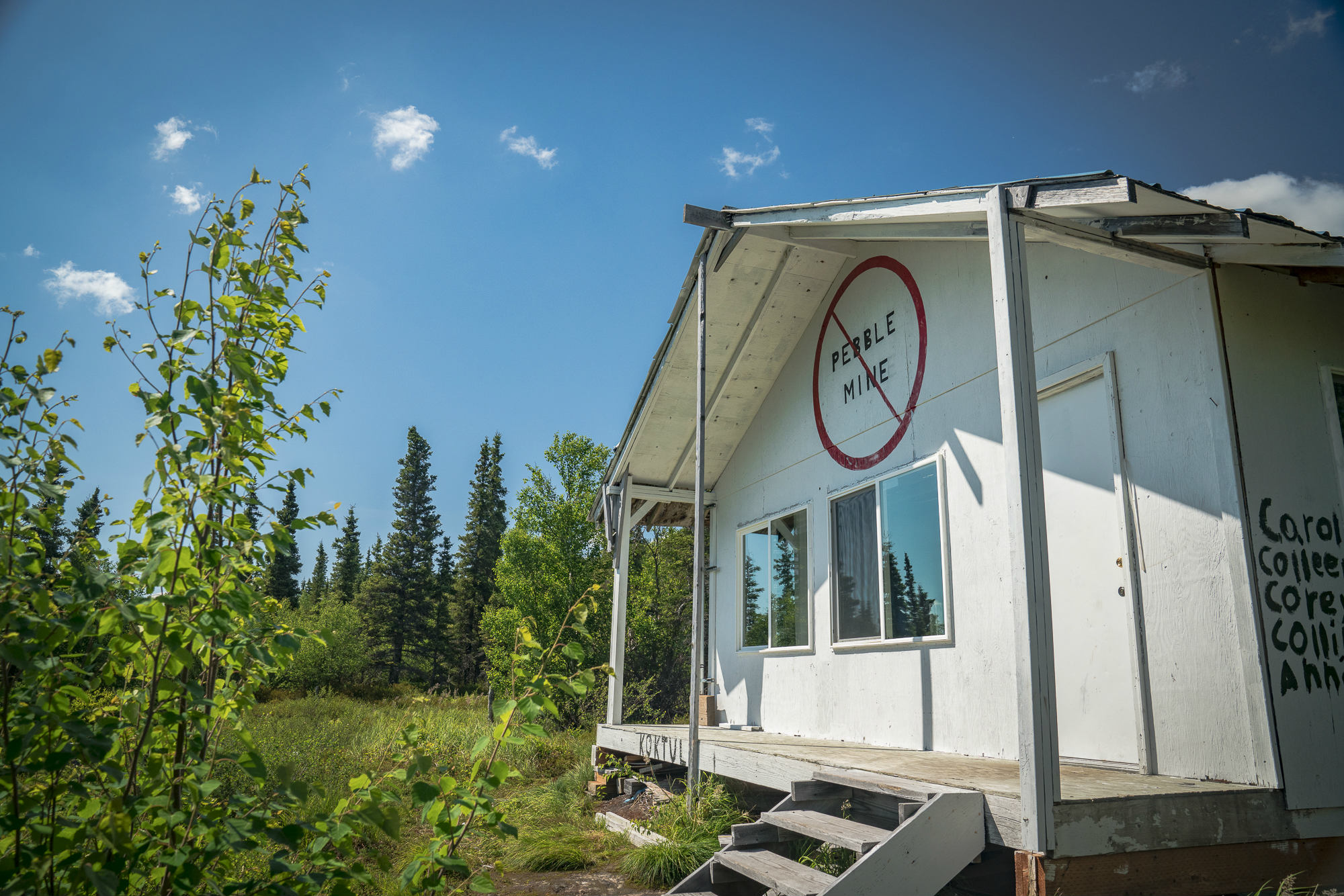 But despite the final sufferfest, the trip was a success. Was it worth it? I might have given a different answer then, but I can confidently say now that the Koktuli is one of the wildest places I have ever been and I hope to return to this promised land for years to come. Despite this river being remote, seldomly explored and densely populated by bugs,it deserves every bit of protection as Yellowstone, Denali or any of our national treasures.