I’m having a hard time picturing the upstream class IV Abby describes in detail as the sound of rolling boulders shoot echoes off the canyon walls. The Rio Pastaza is swollen with rain, abnormally high and too dangerous for boaters today. Full-size logs crack and break as the river jams them into the narrow chute known as Pastaza Canyon. An incredible amount of water and debris bottlenecks through a bedrock crack in the earth eroding at a pace slower than the surrounding dirt. It’s not much wider than a kayak although this stretch is off-limits anyway.

A landslide up the road has blocked traffic and everything is quiet here today. We peer off the edge of an orchard at Abby’s Hideaway to observe the chaos below. Abby shrugs, unaffected after living through the 2015 eruption of Tungurahua, the snow-capped volcano casting a shadow on the charming town of Banos. She invites me to the main house for a cup of tea and answers my many questions about the rivers and logistics here with a full history lesson about the region and the whitewater scene. Turns out, I unknowingly parked my camper van at the right place because Abby Dent is a wealth of knowledge and a pioneering female kayaker in Ecuador. 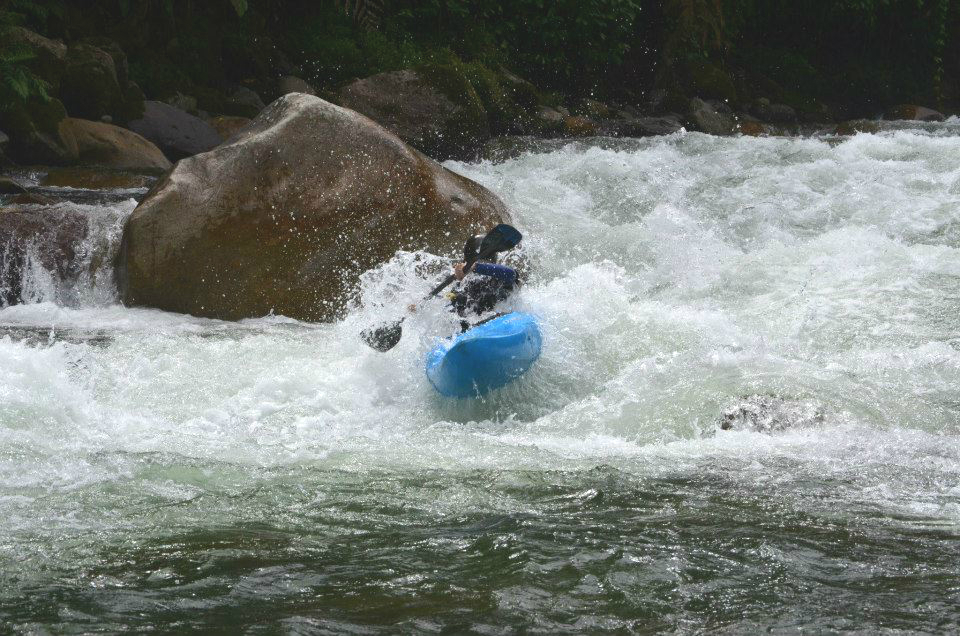 Raised on the Jungle Rivers
Speaking English, it’s easy to assume Abby Dent is Irish but when she transitions to Spanish, it quickly becomes clear she was raised here. Abby and her family moved to Riobamba for a year before settling in Tena, Ecuador, at the age of eight, long before the area turned into a whitewater hub. Her family opened one of the first whitewater outfits, River People, and she was raised on the local rivers.

She learned to swim rapids from natives in the jungle while cutting her teeth on big water during high school. As a senior, she pressed for early graduation and made the jump to full-time guiding at the age of 17 with a professional guide license, dedicating every waking minute to the rivers. She was likely the first and only female guide working in the country for a number of years. 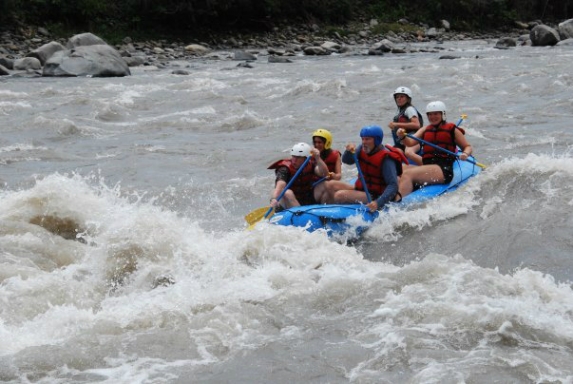 Abby guiding, age 16, after getting her first license. 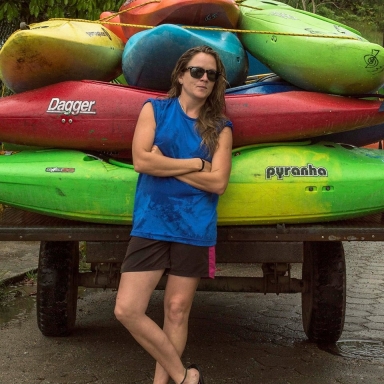 While guiding commercial raft trips, Abby continued developing as a kayaker and eventually transitioned into a safety kayaker and instructor. She owes a lot of that early progression to a friend, Chris Ryman. For more than a decade, her daily routine was tied to the river systems, running commercial trips and competing in solo and team relay races, earning several gold medals. In 2015, she even competed in a men’s whitewater race, taking 3rd place and cementing her reputation as one of the most skilled boaters in the area. 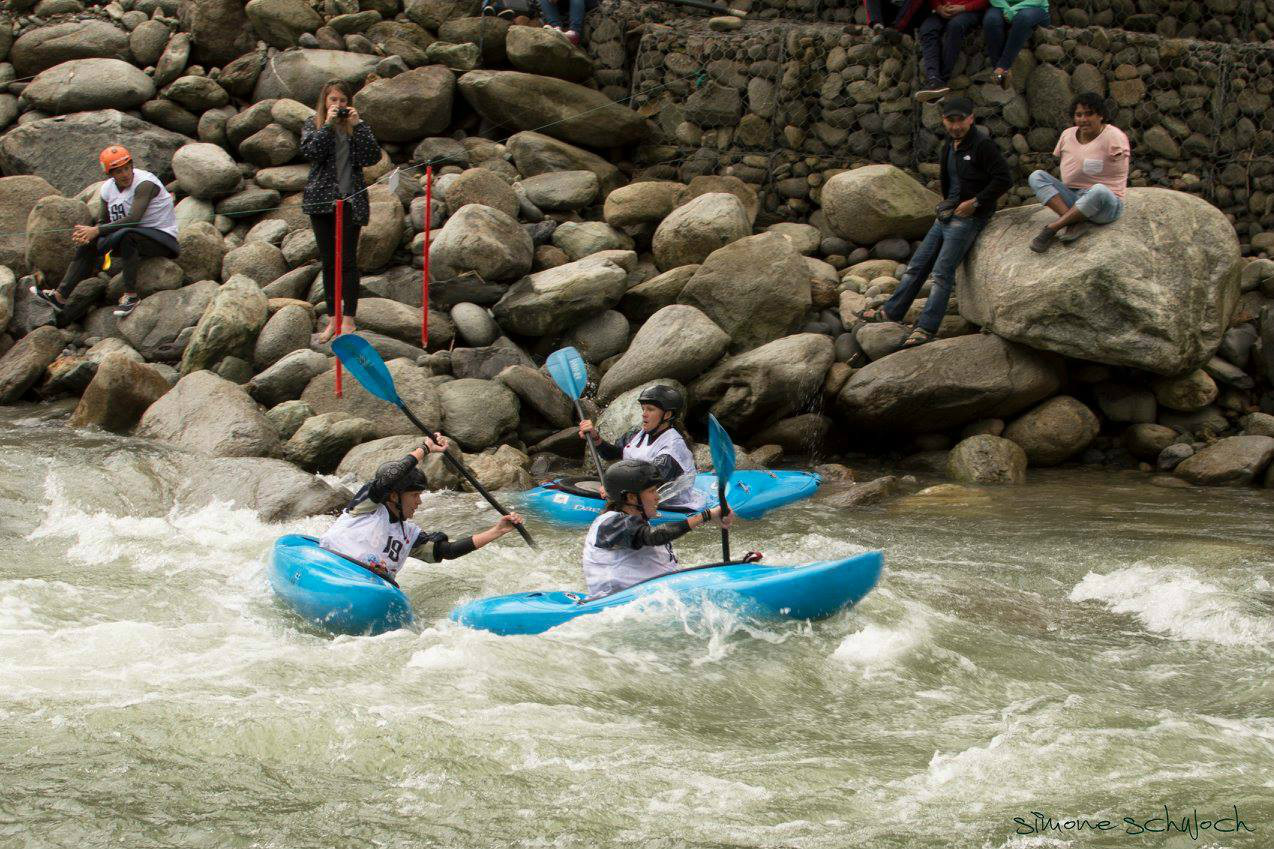 Tena and the surrounding region is absolutely loaded with rivers. The roads in all directions follow major river systems and you’ll constantly cross bridges above smaller tributaries. Almost everything feeds into the Rio Napo and eventually the Amazon. The Jondachi, Jatunyacu, Hollin, Quijos and Rio Misahualli are just a few of the incredible rivers Abby can access from her home base in the village of Tena.

Abby and her family developed several now-popular commercial runs in the area after completing first descents in rafts on the Upper Hollin class IV/V section, including an 8-meter waterfall. Same goes for the Jondachi and Intag Rivers where Abby kayaked alongside her brothers to develop the first commercial rafting runs in the early 2000s. In order to make this work she says, “We built good relationships with the villages and eventually used their traditional trails and porters to establish a system for commercial use on the rivers.” Building those community relationships seems natural for Abby and she is continuing to push beyond the local trails as Ecuador gains traction in the international whitewater community. 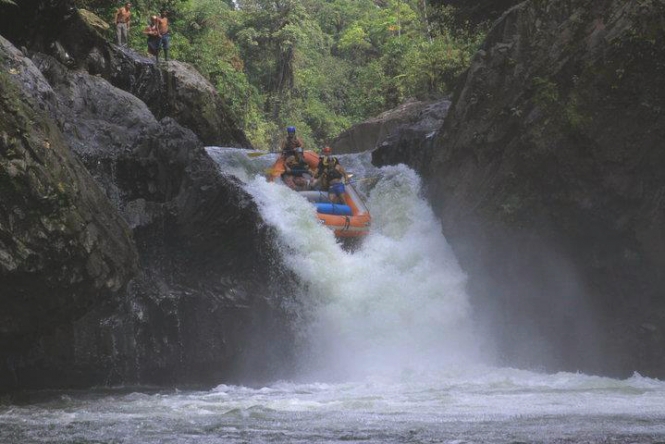 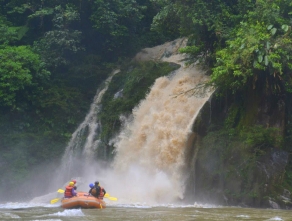 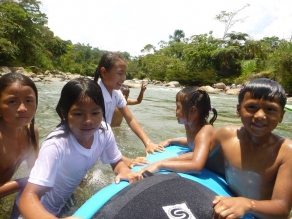 The First Female Kayaking Group
After working for years in a male-dominated guide scene, Abby noticed an increase in female paddlers. The female kayakers were segmented, however, and finding kindred spirits to connect with on river days was not easy. In 2014, she launched the first Female Kayak group in Ecuador with the mission of recruitment and unity while pushing for acceptance as an official sport in the country. The club launched with only two members but quickly increased over the years.

Today, there’s a core group of 10-15 members, currently led by one of the original club members, Nadia Golsak. Abby earned her way into the kayaking world in a country where high import taxes make quality equipment difficult to access. If a new member sticks with the group for a full year, they earn a piece of gear and have access to the warehouse kayaks. Dedicated members can train while working to obtain ownership of their equipment. 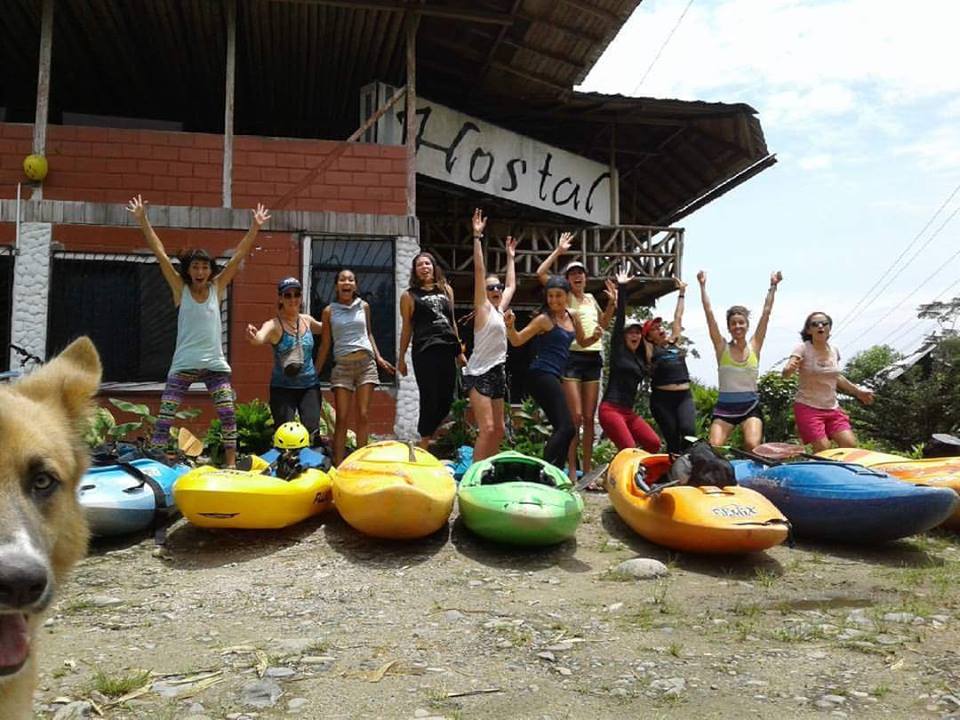 The notion of a club caught on quickly. Male kayakers didn’t have a central institution either. They made the big move to combine the clubs into an inclusive national club, adding kayaking as an official sport in the country of Ecuador. After several years of red tape and hurdles, Kayak Club Ecuador officially launched in late-winter 2019, opening the opportunity for paddlers to unite and train under International Rafting Federation certified instructors. Club President Gabriel Garbin traveled and worked to obtain the first IRF certifications, effectively importing the skills to Ecuador while creating an official certification umbrella. Abby is the Vice President with her right-hand Nadia Golsak.

As an official sport, Abby’s original notion for unity and recruitment is working and a tight-knit community of world-class paddlers is now integrating, sharing and teaching beginners. Instructional classes, first aid and swiftwater training are now accessible and the country is poised to continue increasing participation for men and women while providing a central venue. The club also functions as a resource for international paddlers traveling to Ecuador for the seemingly unlimited number of big water runs. Courses, volunteer opportunities and membership is open to non-residents who want to join in the fun and partner with local paddlers. 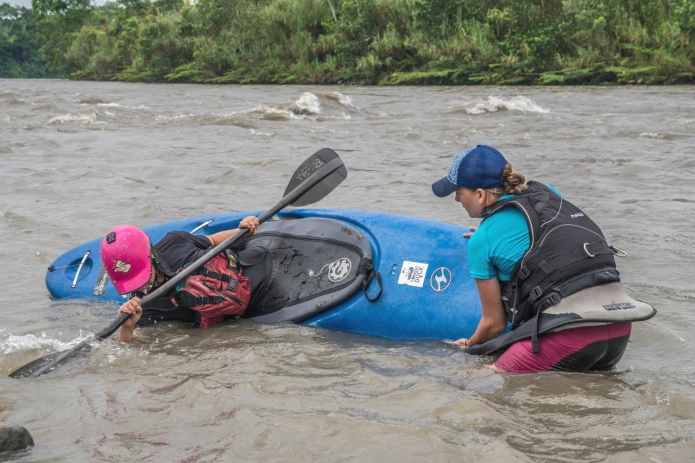 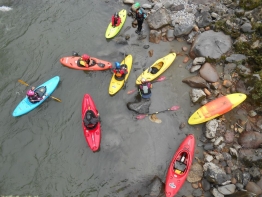 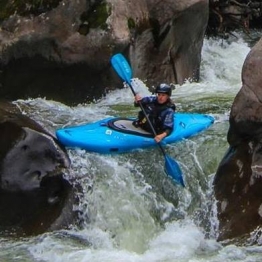 Sidelined by an Accident
Getting to this point was anything but easy for Abby Dent. Shortly after launching the female club, she was tackling one of her favorite runs on Piatua River with a group of Canadian paddlers. The water was down, exposing new obstacles and she caught a submerged boulder to the right shoulder following a boof.

The rock caused major trauma to the shoulder along with a nearly irreparable dislocation. Reaching a hospital required five hours of waiting and another three before actually seeing a doctor. The injury sidelined Abby from kayaking, requiring major surgery and a long recovery period. Five screws currently hold her shoulder in the socket.

Being bedridden and off the water is the worst-case scenario for any river rat. “I actually thought about quitting at one point,” Abby said. “But the paddling community was so supportive, especially Nadia, she worked really hard to keep the girls club alive. Everyone really helped me through the injury. I buckled down and focused on the club after my paddling family helped so much.” She worked on pushing the club forward while rehabbing her shoulder. 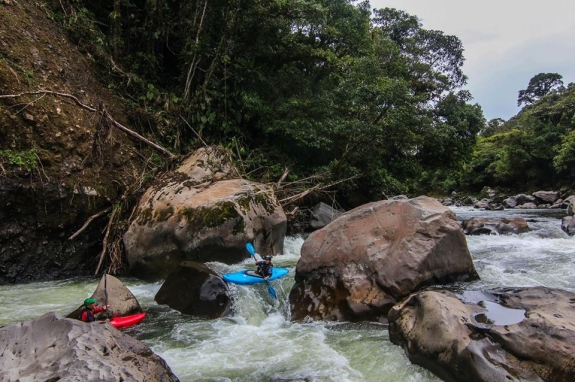 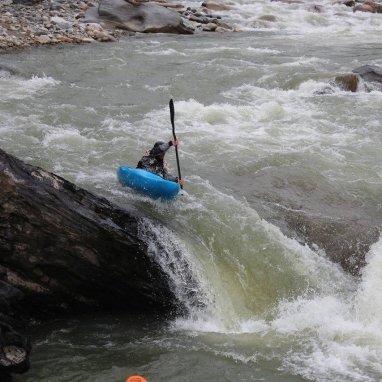 Fighting for the Rivers
Building a community is as much about fighting for river protections as paddling for Abby. Local tribes, towns and other recreational stakeholders in the area share the same sentiments. Dams and natural resource development in the Andes and the Amazon basin currently threaten Ecuador’s rivers. The whitewater community, tribes and local villages are joining together to fight for much-deserved protections.

“The combination of festivals and activist meetings have brought the locals and the kayaking community together to fight for river protections,” Abby says. “Seeing everyone join in the effort to protect our resources has really been inspiring and I’m proud to be a part of the amazing community here.”

Abby helped organize and run the Jondachi Festival alongside Matt Terry of the Ecuadorian Rivers Institute. The Jondachi and other festivals are growing and drawing much needed international attention to the rivers. 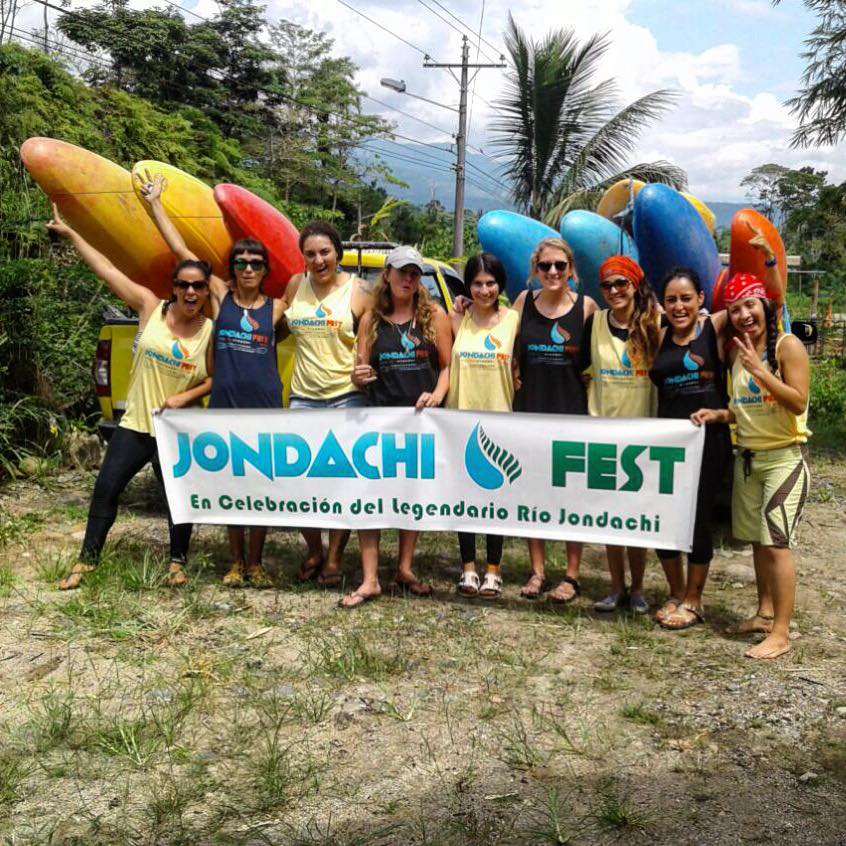 Holding these events began to showcase the rivers being threatened with the goal of holding back development in areas occupied by native tribes while protecting recreational access for the growing tourism sector that relies on healthy rivers. Unmitigated private dams, mines and oil and gas development are all major concerns sparking outrage and protests in Ecuador. Through the club and the river festivals, paddlers in Ecuador are uniting to form a powerful voice.

When Abby isn’t busy organizing and working for paddlers in Ecuador, you can find her getting back out on the rivers while running the cabin rentals and campground perched above the Pastaza River at the aptly named, Abby’s Hideaway.