A Rafting Adventure in the Maine Wilderness

“I don’t know if it’s worth the nine-hour drive to the Penobscot,” my friend said in early fall. Face blank, I stared at him, not sure how to reply.

I had been pining for this trip for years—literally. 18 months ago, in a desperate attempt to ward off the cold and darkness of winter in northeast Pennsylvania, I cranked up the fire as I poured over maps, YouTube videos and Google Earth views of Baxter State Park and Katahdin Woods and Waters National Monument (KWW). A singular blue line—the West Branch of The Penobscot—piqued my interest most.

Conflicting schedules and other misfortunate variables had already skunked a previously planned trip earlier in the year. The disappointment of those scrapped plans still clung to my psyche, but nevertheless, I was still eager to make the long drive up to Maine and see what this river and its wilderness surroundings had to offer. It seemed I was getting schooled. Patience is something I’m not that good at. 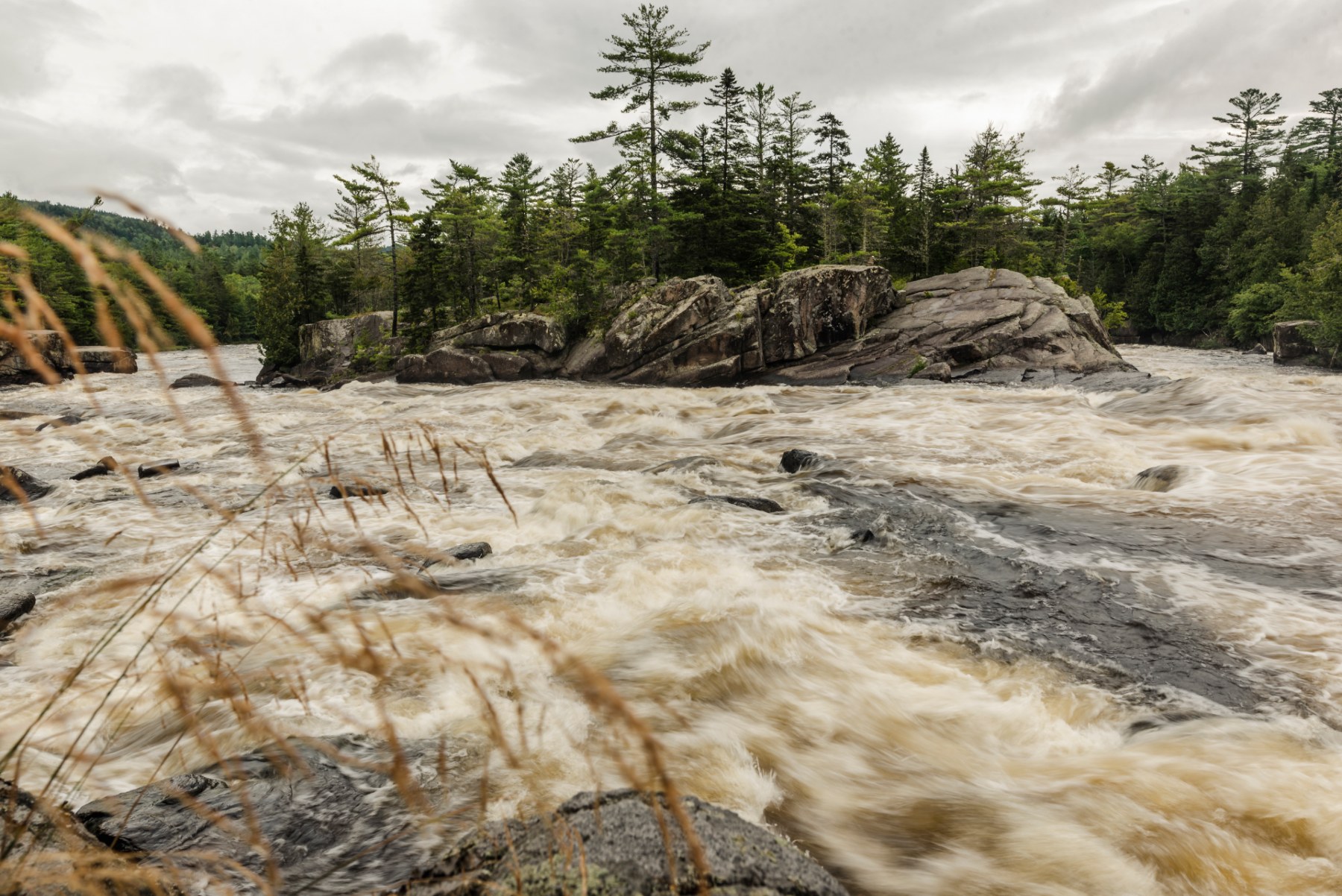 The West Branch of the Penobscot has a logging history that dates back to 1828. Log drivers used the West Branch to transport logs as far south as Bangor. The logging business peaked in 1872, but the Penobscot’s powerful gradient defined it as a great resource for fueling a paper mill. In 1899, The Great Northern Paper Company began construction of the Millinocket Mill. At the time of its completion, it was the world’s largest paper mill.

The mill operated for more than a century before shutting down in 2008. Millinocket still depends on the West Branch of the Penobscot for its prosperity, although today they look to the river for its recreational qualities. Millinocket is the gateway to Baxter State Park and KWW. The Appalachian Trail also crosses the West Branch and follows the river for three miles before hikers begin the ascent to the AT’s northern terminus: Mount Katadhin. 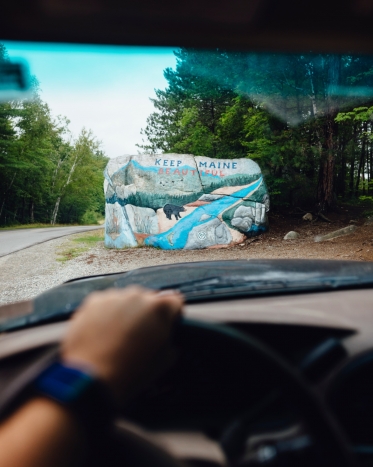 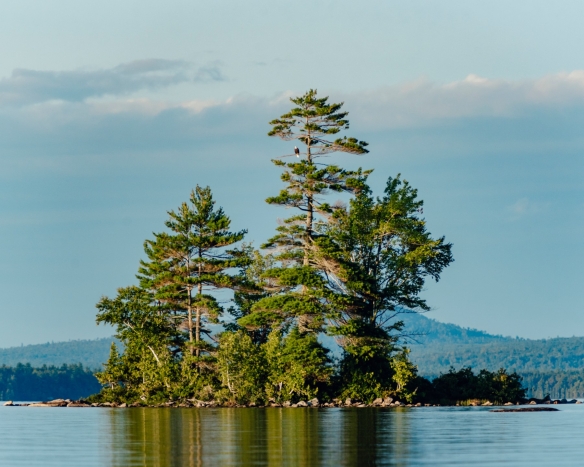 Another year passes. It’s winter again and I pull out the maps to rehash the trip I want to execute. With a new game plan in mind, I jump on a call with good friends and local Maine adventurers, Cait and Corey. If anyone could make this trip happen, Cait and Corey can. After listening to an overview of the trip, they‘re very interested. Both mention they rafted the river commercially years ago but remember nothing of the river other than it was one hell of a good time.

Spring passes, then summer. I call my buddy Mikey, a Penobscot local and dedicated river man. He’s the kind of a guy who will take the shirt off his back and give it to you and he’s always down to get on the water. I tell Mikey the plan to spend a few days on the Penobscot rafting the rapids and enjoying the stunning wilderness views of Mount Katadhin. “One last hurrah before summer ends,” I tell him. He’s keen to join us and help navigate the river.

The day finally arrives to head to the river; I meet up with Cait and Corey on their farm in Norway, Maine. Cait’s brother, Chris, and his girlfriend, Brittney, are joining us and they’re as excited as me. We make the long drive to the Big Eddy Campsite where we meet up with Mikey. Stoke is high as we all scramble to set up our tents, inflate the raft and light the campfire before we crack open a cold Allagash River Trip beer. Mikey brings us up to date on the water levels. “High release!” he says and begins to educate the first-timers on what to expect as the beer flows and the banter begins. 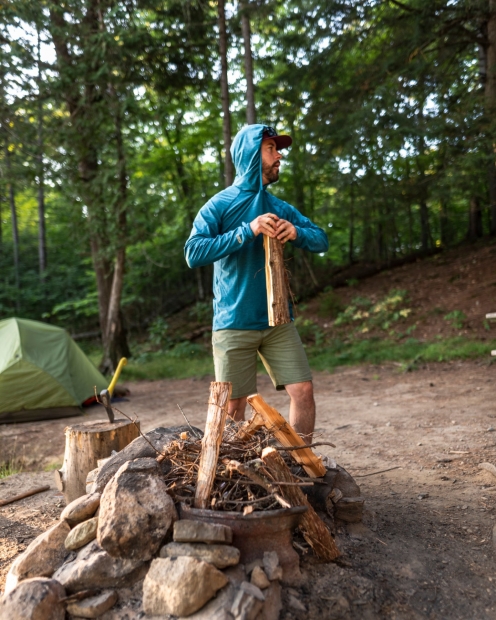 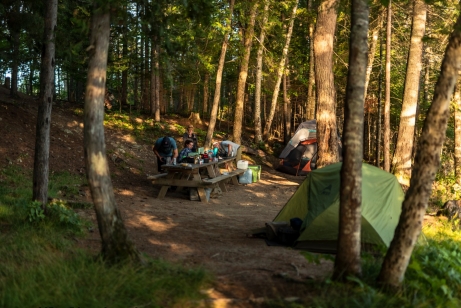 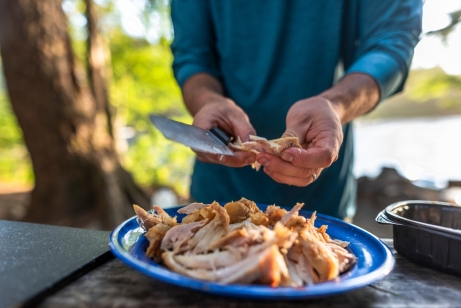 With the higher flows, Mikey explains, the first rapid, Exterminator, will be full on. “Exterminator is a river wide hole that you can skirt around on either side, but mess up the line and we’ll most likely swim. There’s no warm up and we will need to bring our A-game. After that we’ll have some boogie water followed by the longest rapid, Crib Works, which should be good, depending on our confidence level after Exterminator.”

Sunset turns to darkness and the campfire stories crackle. The night lights up in Van Gogh wonder, as an abundance of stars twinkle above the towering northern woods. 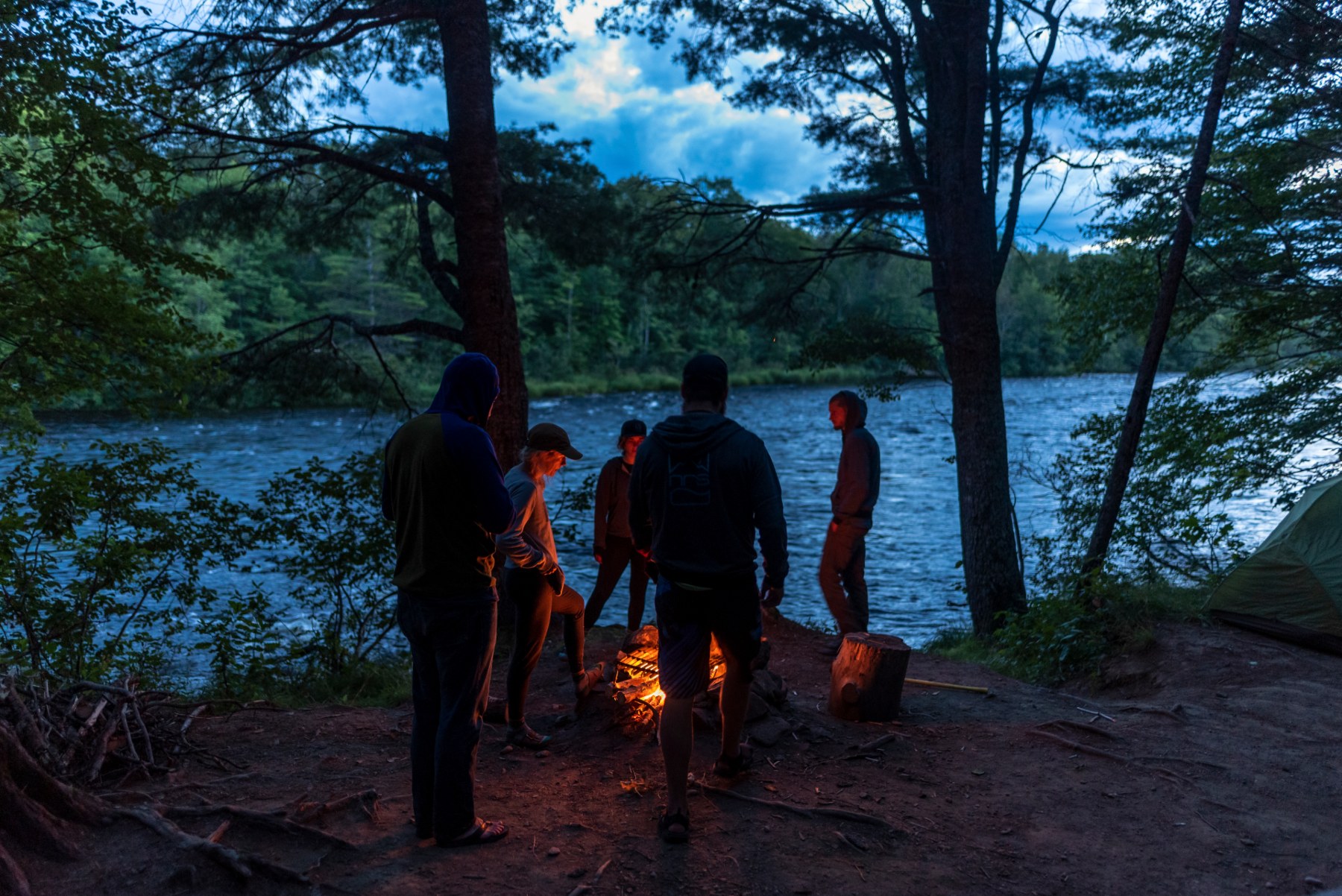 The next day is a stunning bluebird. Jittery nerves awaken as we near the put-in and remember there’s no warming up for Exterminator. The oatmeal starts to turn in my stomach. On the way, we pull over and walk to the cliffside for a quick roadside scout of the large rapid. Scouting from above always makes me more nervous as everything is two-dimensional. We take a long look as the water moves furiously through the gorge.

“Ok boys and girls, let’s do this!” Mikey shouts before turning back to the van. When we reach the put-in, I carry my boat to the edge of the river. I’m in my own kayak, not sure this is a good thing or not. My kayak and I are playing dual roles: safety and photographer. On a personal-goal level, though, I wonder if I’m capable of pulling off the line and finding a good spot to grab the shot. 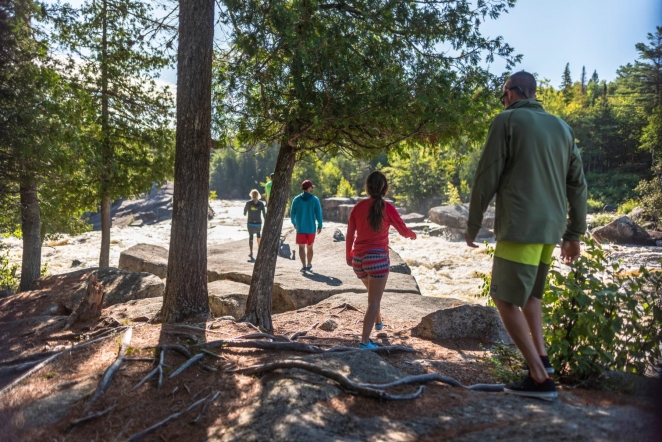 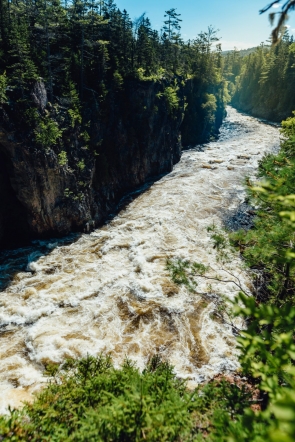 I spend a few minutes paddling around the eddy while the raft crew takes a quick refresher course on paddle strokes, high sides and learning Mikey’s commands. We make eye contact and he knows I’m good to head down the gorge and set up for a photo. He nods while still working with the raft crew. I look down the gorge and can’t see the rapid yet. The current quickly picks up speed and, suddenly, I’m in the meat of the whitewater and heading straight for Exterminator.

Riding the crest of the waves, I start to make out the hole I need to avoid and pray I’m still on the line I chose from the above scout. My paddle grip loosens with relief once I find myself on line, skirting the side of Exterminator; as my kayak shoots past the rapid, I peer into the trough of the hole and realize it’s way bigger and gnarlier than I expected! I hit the eddy and pull out my camera for the raft’s turn.

I can just make out the blue raft far up the gorge. The crew seems to paddle together and everyone looks solid. A thought jumps into my head: I put this trip together so, I’m responsible for everyone. I run through some “what if” scenarios, fighting the anxiety, then tell myself to just be present and deal with whatever happens as best I can. 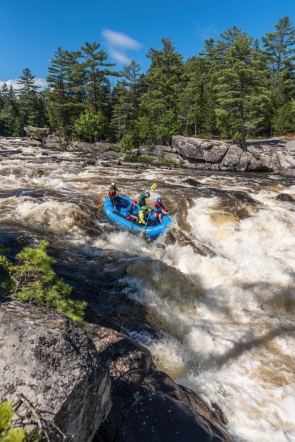 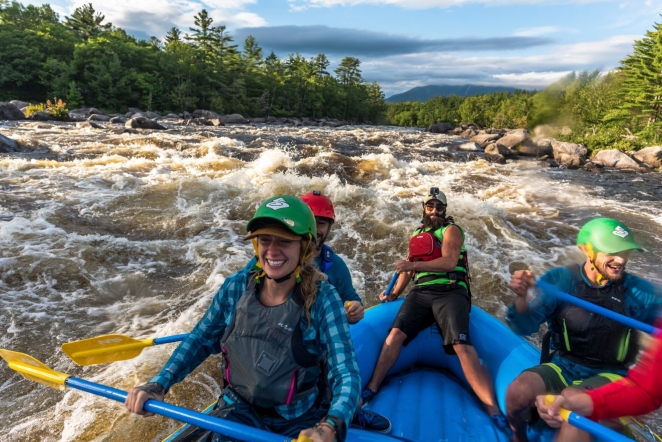 The raft crew paddles at full speed but their trajectory looks like they could potentially drop right into the violent hole. Mikey digs his paddle into the whitewater. It turns the raft a few degrees to the left, lining it up with the left lateral wave. He yells for the crew to “paddle hard!” The raft climbs the wave and smashes into the side of the hole; water crashes up from the hit. The impact throws Corey into the middle of the raft but he climbs back onto the front side tube and joins the forward strokes. I’ve fired off a number of photos and hear the crew yell in excitement. I yell back with relief.

We float down the Ripogenus Gorge and take in its wild beauty—deep green trees tower over us from the rim of the gorge. Its dark walls remind me a little of the Batoka Gorge on the Zambezi River. Stoke is high as we float into our next rapid, Crib Works, one of the more well-known rapids on the Penobscot, possibly in the Northeast. By now the crew has found its stride and confidence is high post-Exterminator. Mikey effortlessly navigates the raft through the long rapid. It’s obvious that he has run this rapid hundreds of times. Knowing that the two biggest rapids of the section are behind us we spend the rest of the day floating the river toward Mount Katadhin in the far distance. 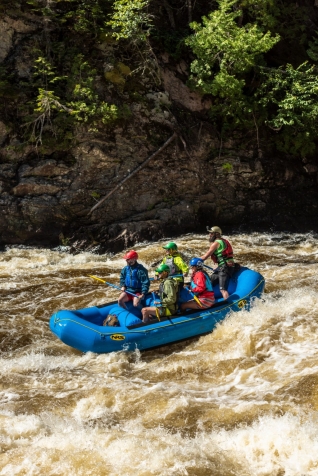 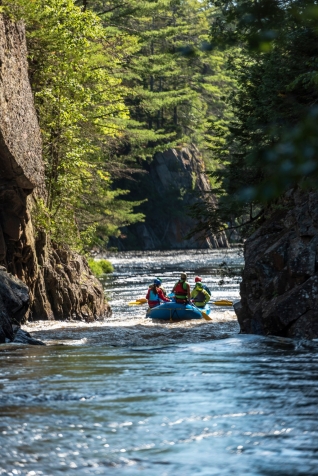 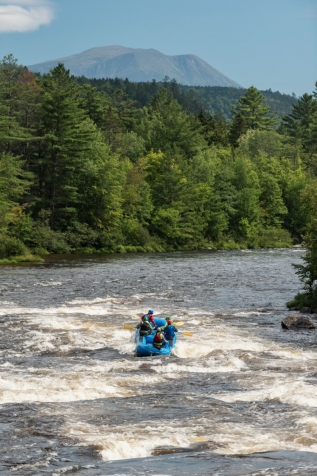 As the adrenaline from Cribworks subsides, Mikey has another plan up his sleeve to make sure we get the full Penobscot experience. He pushes the raft across the eddy and loudly asks who wants to jump off a cliff. Legs and arms are a little shaky—in that post-rapid-stoke kind of way—yet the entire group bails out of the boat, down to at least inspect the jump.

We ignore our nerves with jokes and light teasing until Corey suddenly yells, “BACKFLIP!” and walks to the edge of the rock. He turns to face us all, spreads his arms wide and falls unceremoniously backward into a very well executed backflip. He might have missed his calling for competitive diving. We all take turns jumping with our own style of silly maneuvers, big grins on our face. 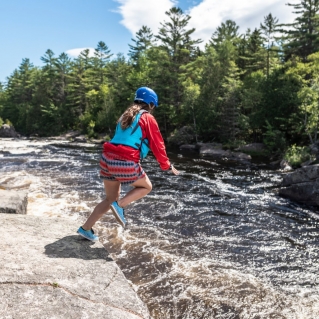 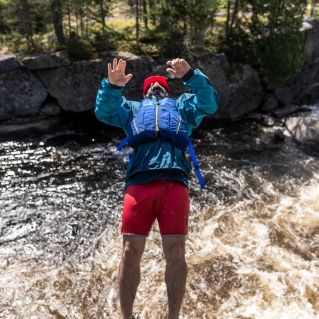 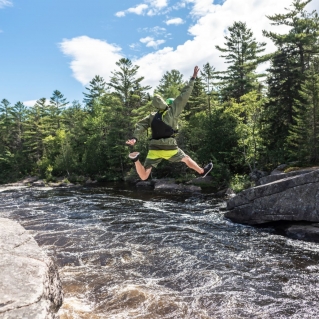 From our cliff jumping spot, we navigate the river with ease. Signs of late summer—deep greens with a few reddening Maples sprinkled throughout the northern woods—line the river. The rapids turn to longer wave trains with languid pools between each of them. We push on through late afternoon until Mikey spots a white sand beach and pulls into the big eddy. Brittany grabs the snacks and cold beer. As we peel out of our wet gear, Chris yells, “Catch!” as a Frisbee flies across the beach at an alarming speed.

We spend the next two hours playing games on the beach, the only group of people in sight—an advantage of being so far north. The natural solitude is part of what draws Mickey to the area. 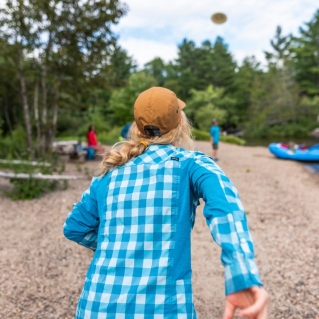 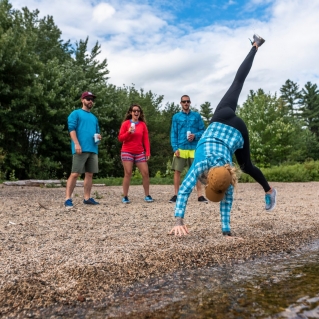 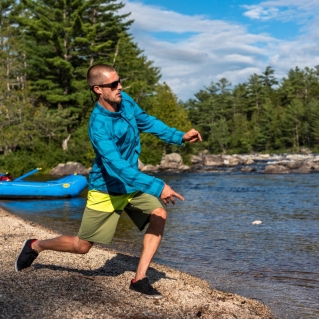 The sun clings to the waning day when we decide to get back on the raft and run the last two rapids. We arrive at the take out happily exhausted and load up the boats and wet gear. It’s only a 20-minute drive back to Big Eddy Campsite. We pitch our tents for another night to wrap up a solid weekend adventure in the Maine wilderness. 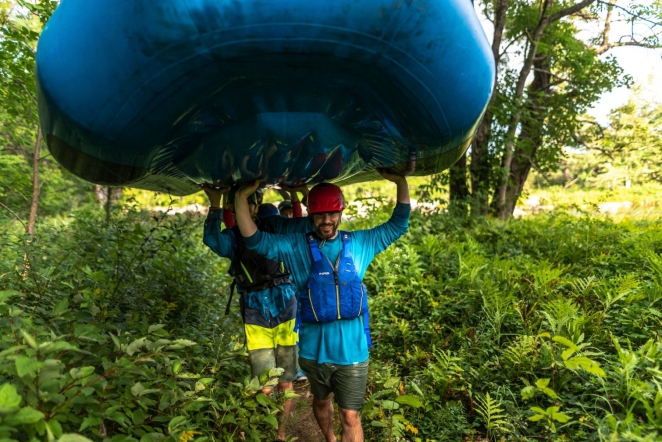 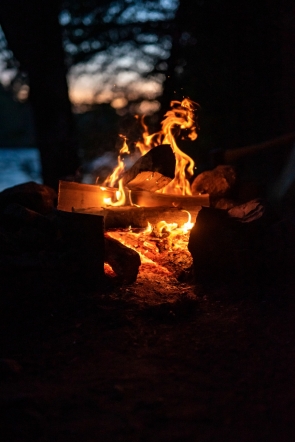 In the end, all the planning and logistics, coordinating with everyone’s busy life and my patience paid off. Sometimes, simple intentions lead to the best adventures. Extravagance wasn’t our goal. Instead, we only hoped to spend a couple of days together exploring a wilderness so close to our backyards before cold weather forced us south.

Later that night, we agreed we should make this an annual trip. “Why not,” I thought, “Sure it’s a bit of a drive but you can’t find yourself in a wilderness environment without traveling a couple of hours and throwing a little bit of caution to the wind.” Do you even have to ask if it worth the nine-hour car ride? 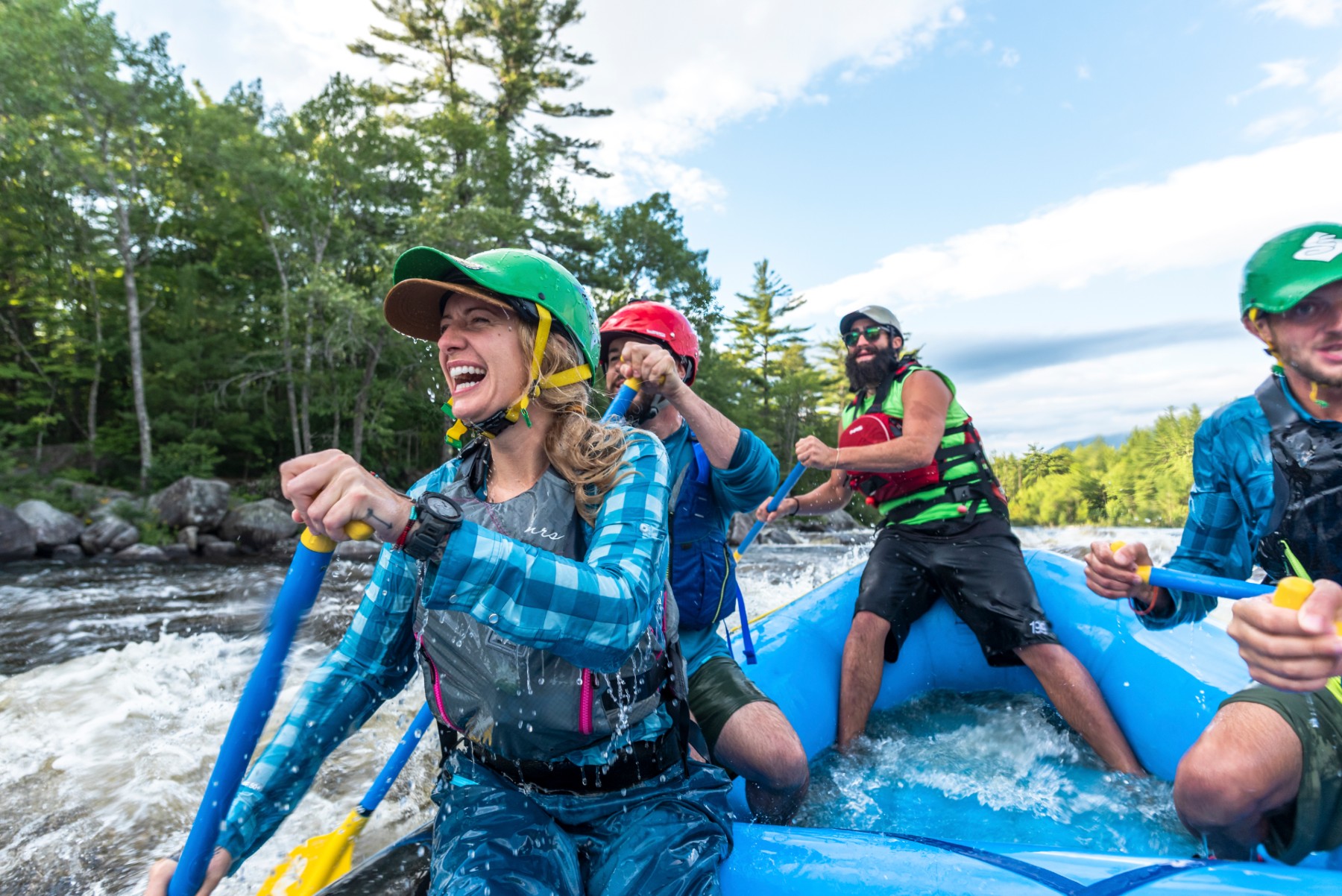