“We considered it more of a hiking trip,” said the mysterious raft guide. “We looked at the river as an obstacle to going hiking.”
“Wait,” I said. “Did you just say hiking?”

I was on a long-distance voice call with a veteran Grand Canyon guide who spent his off-seasons on an island in Southeast Asia. We’d connected through social media after I read an article about his trip down the entire John Wesley Powell route, roughly 1,000 miles on the Green and Colorado Rivers.

The previous February, I’d won a winter Grand Canyon permit. Now I was in the early stages of planning my own explorations along the entire Powell route. So far, I’d only glimpsed the route from land. My watery visions included serenely floating through scenic canyons, endlessly paddling flatwater, and white-knuckle-navigation through massive rapids.

But now this mysterious lifer, maybe 25 years older than me, was claiming the river-trip-of-a-lifetime was actually all about the hiking? 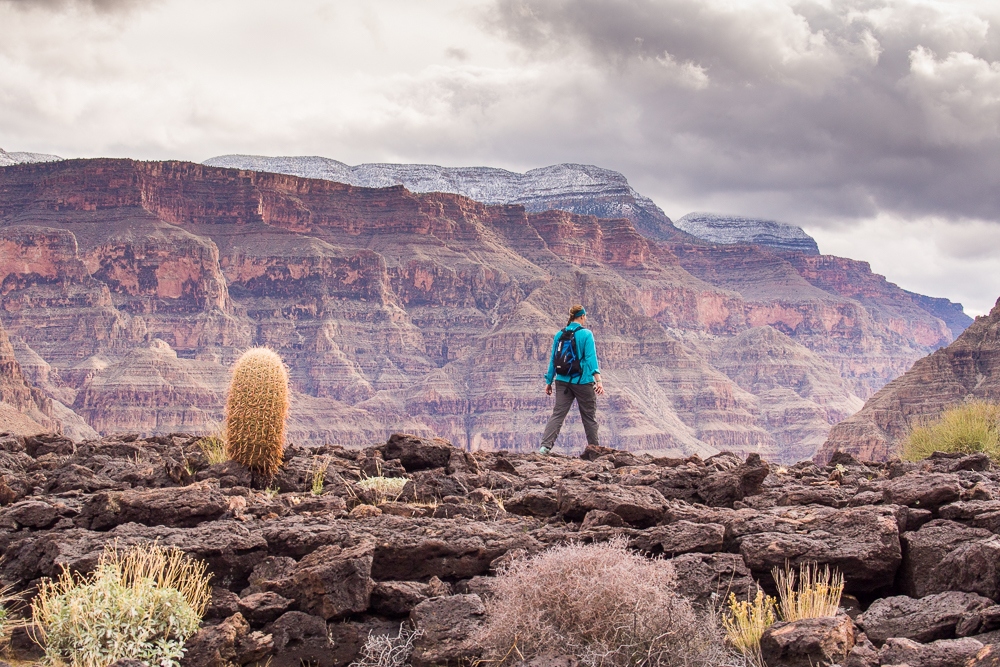 Something did not compute here. I loved to hike, but I didn’t think about footwork as the reason for a river trip. My friends and I went to the river for the river. Any cool hikes along the way were just a bonus.

Maybe this seemingly friendly guide was one of those crusty veterans who enjoyed blurting confusing aphorisms at younger river runners? Things like:

“It’s the easy rapids that are hard.”
“You need to forget what you know to find out what you think.”
“Paddle in a circle if you want to go straight.”

Often these declarations meant someone was stuck in an eddy again.

I tucked away the mysterious guide’s enthusiastic claim about hiking for future consideration, roughly translated as there are some nice trails on the Powell route worth checking out. Then we set out on the trip, and I soon realized this by-foot fetishist was really onto something. 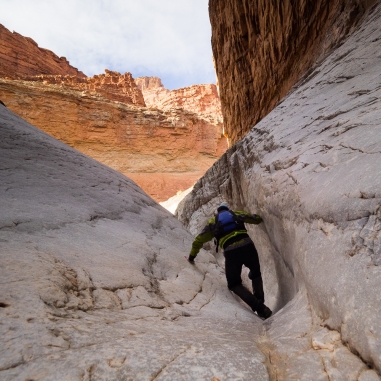 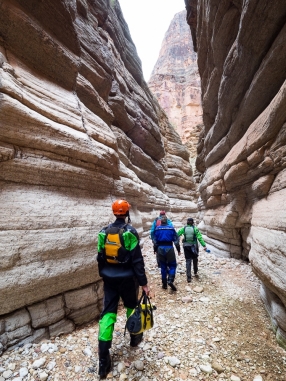 Of course, it took a few trips to get into the side-hike mindset. During our first week, kayaking across Flaming Gorge Reservoir, the days on the water were long and slow. We were often so ready to get to camp and lounge in front of a fire, that we found motivation for exactly one hike.

On day five, we walked a quarter mile to try and buy beer from some party-camping fishermen. They were more than generous, and this set the bar ridiculously high. Henceforth, I would secretly hope to find free cocktails in every side canyon.

When we reached the takeout ramp on our last day, I thought back on some very scenic spots that we’d paddled right past. In Firehole Canyon, we’d stared up at the stone pillars named the Chimney Rocks and snapped a few photos from water level. The thought didn’t even occur to take a closer look from a different vantage point. As the week continued, we’d paddled swiftly through stunning canyons of white sandstone called Horseshoe and Hideout without considering a hike up for a better view.

What had been our hurry to reach camp? We were tired and cold, sure, but wasn’t that kind of the point of these trips? We could have been tired and cold for one more hour. Plus, we definitely wouldn’t be rushing back to paddle across this 90-mile lake anytime soon. We probably should have stopped and looked around when we had the chance. Going forward, I decided to be more exploratory and fight that easy instinct to stick to the boat or just lounge around in camp. 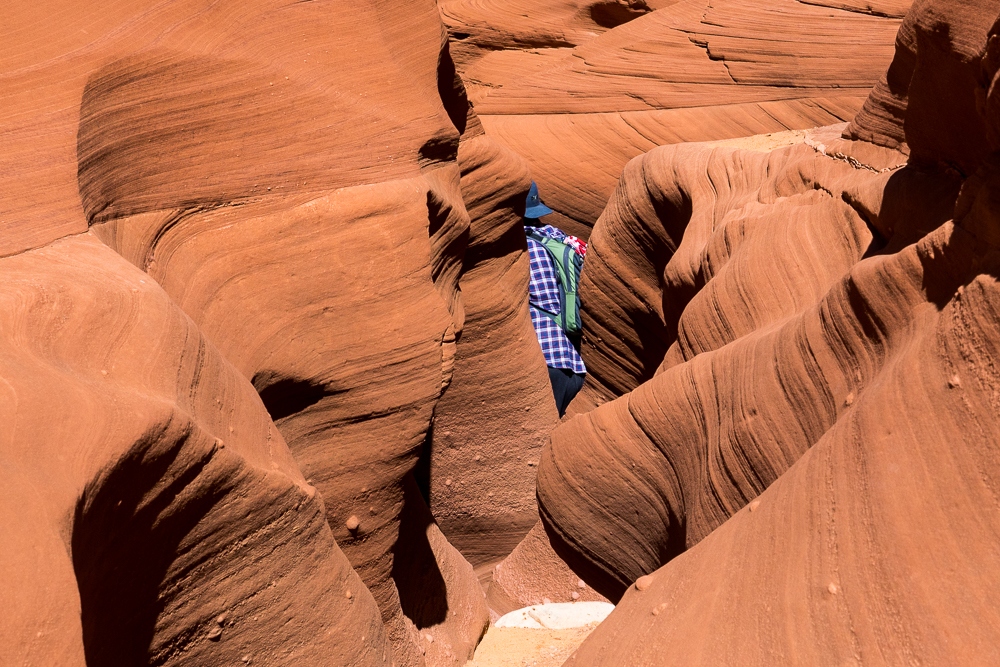 As trips along the route progressed, my hiking radar improved. We hopped out at places like the Jarvie Historic Ranch and explored a preserved 19th-century homestead. Hiked to iconic viewpoints like Rippling Brook in Lodore, Bowknot Bend in Labyrinth, and above Deer Creek in the Grand Canyon. Examined rock art panels on cliff faces and visited Ancestral Puebloan ruins, like the watchtower at Fort Bottom. Waded through the milky blue waters of the Little Colorado and Havasu Creek.

Many of these early stops were at better-known sites. And the more stops we made, the more the idea of stopping went from a maybe to mandatory. As we ticked the boxes for these classic sites, our side hikes took on more creative twists. It went from “let’s go visit that thing we’ve heard about,” to “let’s go see what’s out there.”

This always-be-hiking mindset led to fun discoveries on other rivers in far-off places. In the Ozarks, I began wading up side creeks on the chance there might be a swimming hole or waterfall. Other times, we might poke around in the forest, looking for springs, caves, or cliffs. Turns out, we found plenty of each. 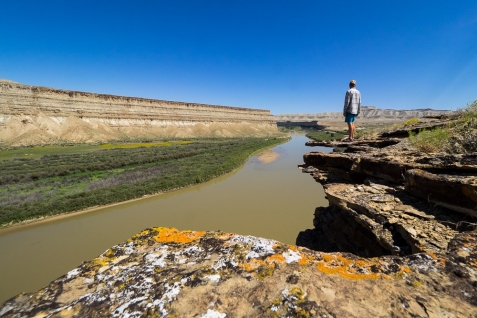 Side hikes in Desolation Canyon.

Exploring springs on the Eleven Point River in the Ozarks. 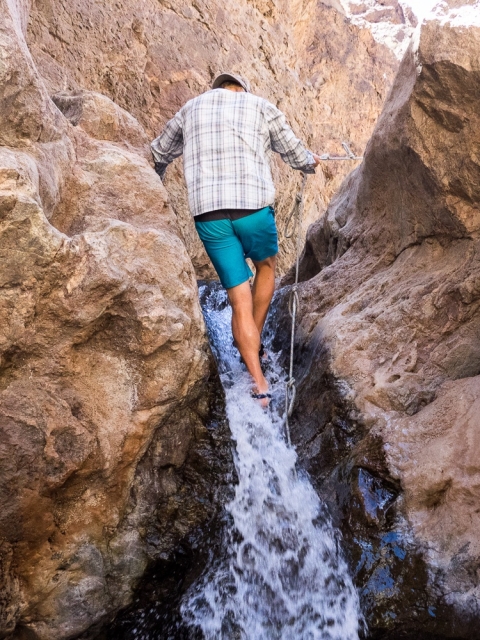 For a summer reunion trip, friends and I planned a long weekend using kayaks and a raft to reach a side canyon on a whitewater favorite, the Arkansas River in Colorado. After studying the poem written by eccentric art collector, Forest Fenn, the clues to the treasure he hid matched up just enough for a fun trip with boating and hiking.

Before returning for second and third runs on multiday trips, I found myself studying maps and books and photos to decide which was the next side canyon to explore. Short side trips became longer and more rigorous affairs, with river days and layovers planned around exploring away from the boats. We scrambled up mountainsides and plateaus. Wandered through fields covered by massive boulders or moki marbles, a kind of iron concretion that forms in Navajo sandstone. Other spots, we found caves and stone arches. Old mine shafts and abandoned cabins. Mysterious inscriptions by historic explorers, like 1830s trapper Denis Julien. We even did a few night hikes, including an eerie scramble up Tuckup under a nearly full moon.

Not every day on the river was always about side-hiking, of course. Some days were just about scouting, running, and excessively reliving the rapids like we’d always done. Or floating lazily with the current, feet dangling in the water. Or playing around on paddleboards. Some hot afternoons, we’d arrive at camp and anchor ourselves at the waterline. Some cold days, we’d bundle up and orbit the fire. Other afternoons, the choice might be playing a game on the beach or hanging out under an umbrella.

Even when the focus was on hiking, not all side explorations yielded the same results. Sure, a new direction might lead to something unexpected, like a slot canyon grotto. But other directions might involve a few hours of exertion with the only climax being a glance toward the next bend, a reluctant shrug, and a few more hours of retreating to camp.

This happened above Whitmore camp in the lower Grand Canyon. On a previous hike, I thought I’d seen a route up to a high point that might provide an interesting view in all directions. Perhaps I could see Grand Canyon-Parashant National Monument, the Uinkaret lava field, and maybe the nearby Toroweap Overlook? But after hours of hiking, any hypothetical high point still seemed hours away. If one existed at all. The heat of the day had arrived, and I was stumbling uphill like a character lost in the Twilight Zone. I basically spent hours of effort for a closer look at an old gravel mining trace.

These occasional turnarounds without payoff were too tedious for some river runners, especially my diehard whitewater pals. But, usually, if I looked hard enough, I could spot something interesting that made the entire trek worth it. A spindly ocotillo gleaming like emeralds in the spring sun. A sheer cliff face of Bright Angel shale, looming like a purple and green rainbow over a dry wash. 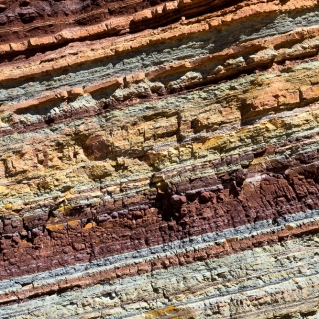 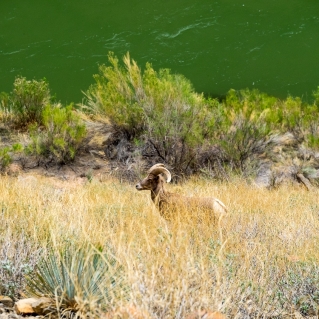 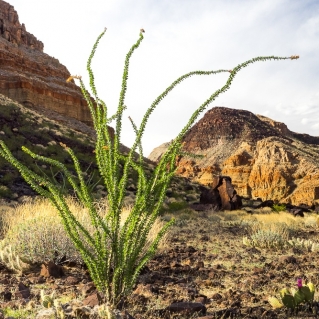 Another afternoon in the canyon, I was scrambling along a scree slope, looking for a dry fall. I wasn’t sure one even existed, which would depend on how the topo lines of the map matched the actual topography. After reaching a corner, I discovered the dry fall I’d hoped for was just a slightly steeper talus slope.

Nothing much to see. Shrug. Turn around.

I sat on a boulder to rest and consider a better route back to camp than jumping across boulders right before they slid out from under my feet. I heard some falling rocks and the clicking sound of hoofs striking stones.

Less than fifty feet below, framed against the translucent green of the river, a bighorn sauntered across the slope. He turned his head and glanced at me.

“Oh, you’re into side hikes, too?” I imagined the bighorn saying. “Cool.” Then the bighorn kept on walking.