Winter Weekend Warriors: The Search for Unfrozen Rivers in Manitoba

It’s early March, just a few weeks before the official start of spring (the equinox), but Mother Nature in Northern Manitoba has not received the memo. The online forecast promised us temperatures in the low teens but as the weather often does in these parts, it has changed on a dime.

The thermometer in the truck reads -28 degrees Celsius (-18 Fahrenheit). It’s 2 am and we have just driven seven hours through the dark to get here. For a moment, we pause to enjoy the last few minutes of warmth in the truck before we take the keys out of the ignition and set up camp outside.

Conversation in the truck remains light; we laugh at the predicament we have once again— voluntarily—put ourselves in. We know hardship lies ahead. To the surprise of many, I’m sure, there is no talk of turning back, heading home or renting a room in the dingy motel we drove past an hour back down the road.

We shut the truck off; throw our sleeping pads down and climb into our sleeping bags; some of us lie in the box of the truck, while others crash on the ground below the stars. We are each wearing every piece of clothing we brought.

The story I am sharing is a little different from some in the kayaking world. We are not big name paddlers running big waterfalls in a tropical paddling destination. Rather, we are a handful of weekend warriors, anxious to simply get back on the water after a long winter. 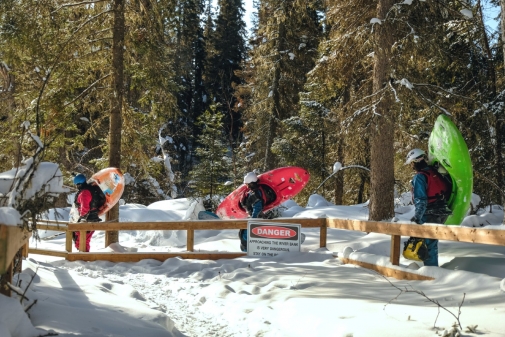 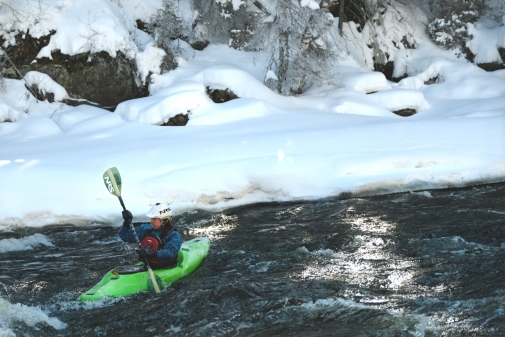 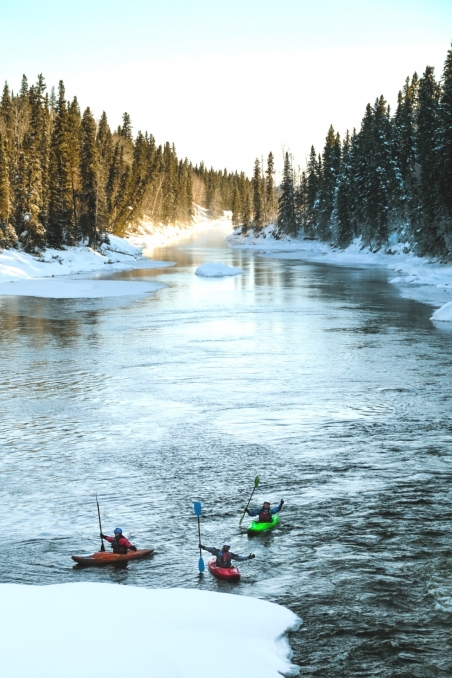 Manitoba is the geographic center of Canada and I live in Winnipeg, the province’s only large city. “Winterpeg,” as fellow Canadians calls us, is notorious for bitterly cold and brutally long winters. For five months a year in Manitoba, the rivers are buried under a foot or two of ice. Whitewater paddlers here hang up their gear every fall, distract themselves with other adventure hobbies to stay sane and not so patiently wait until the ice begins to melt nearly a half year later. Cross-country skiing, however, can only keep a paddler distracted for so long.

Come March, we get antsy, well aware that paddlers in every other part of the continent are starting to see snow melt, rain fall and rivers rise. While winter is still in full swing, every year we jump the gun and go to extreme measures just to get back on the water.

I heard a rumor that some rapids on a river in Northern Manitoba had remained unfrozen this winter. It piqued my interest. And while it was just a rumor, I couldn’t shake the idea that there might be an opportunity to get back in a boat. I had to go check it out. 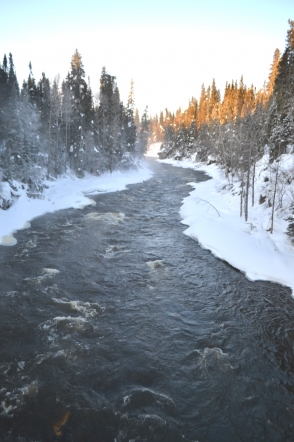 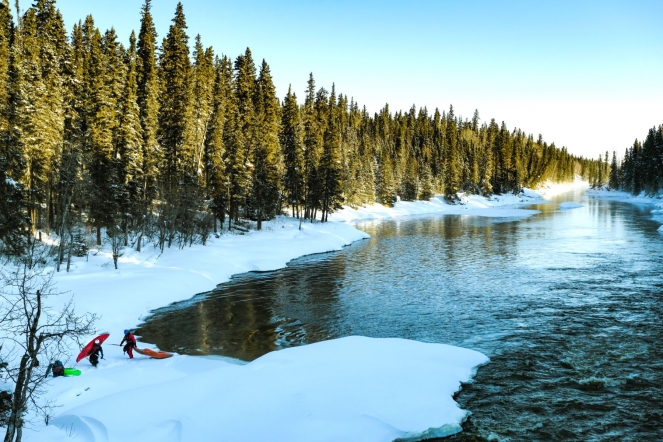 The river is seven hours north of Winnipeg, in a remote part of the province. It would be a gamble to drive all that way not knowing for sure if there is water to paddle. One might think that it would have been tough to find a crew of paddlers willing to drive 14 hours round trip, for the opportunity to MAYBE run some chill whitewater in the cold and the snow, but it took no convincing to find a group fit for the challenge.

We pile into the truck on a Friday afternoon after getting off work. The truck is a clown car of sorts. Whitewater kayaks, snowshoes, sleeping bags and Ramen noodles packed in the bed of the truck, with an equally diverse mix of people piled into its cab. We all come from different backgrounds, different ages and different paths in life, but we all seem to share this (crazy) passion to get back on the river.

After a long drive, the night sleeping at the put-in is a restless one. Condensation from our breath turns to ice on the small opening of our sleeping bags. But we wake to a clear sky, an epic sunrise and all that is forgotten.

In the early morning light, we run down to river level to get our first glimpse. We can’t quite believe it. There is mist rising off flowing open water. Simple Class 1-2, but it’s free of ice! We hoop and holler and high five one another, before fully realizing that it’s still -28 degrees Celsius (-18 Fahrenheit) and we now have to go kayaking. 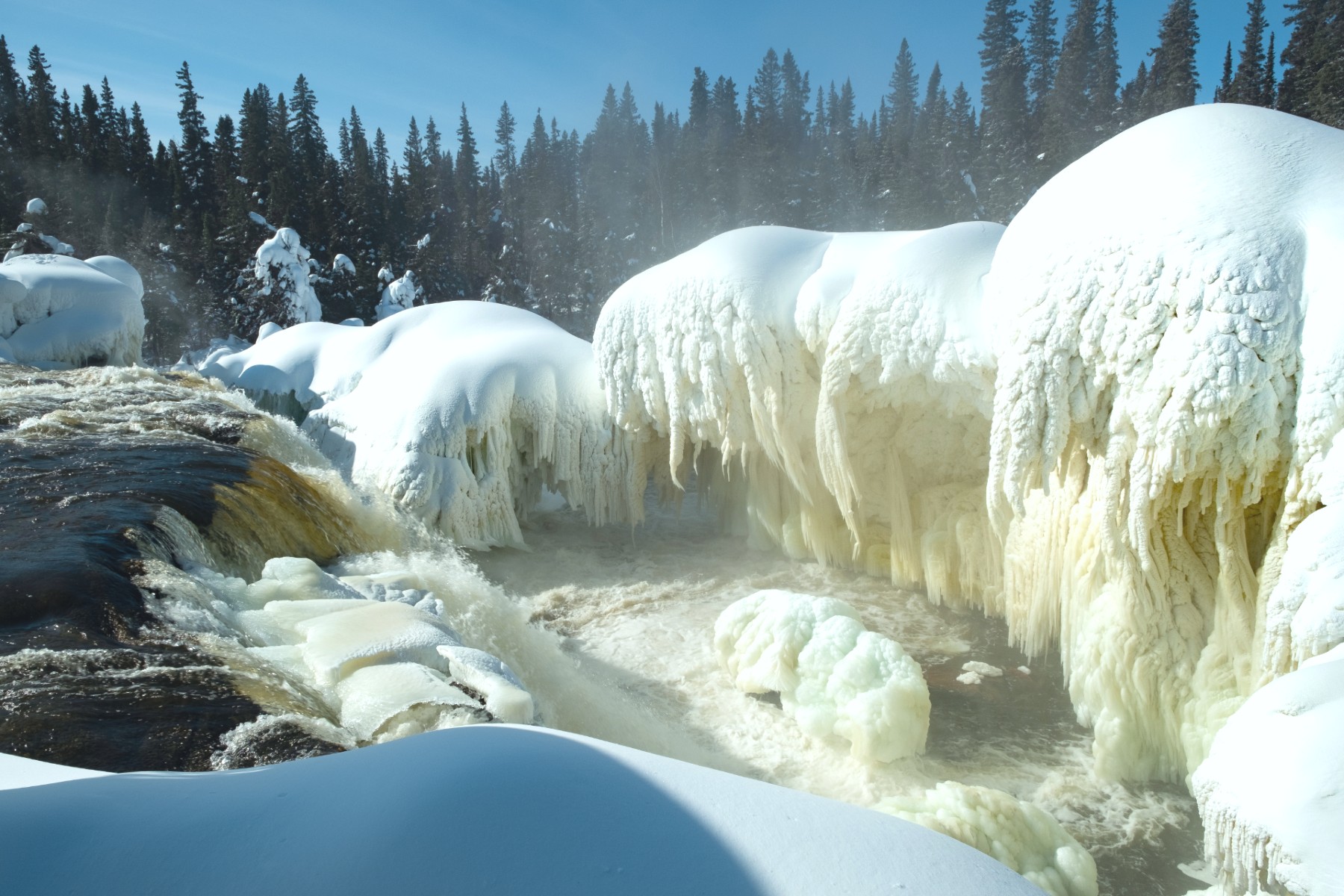 We suit up in our gear, throw our boats on our shoulders and start hiking down to the river. As we get off the trail to the river’s viewing platform for summer tourists, the snow gets deep, waist deep in spots. We take turns breaking trail, working up a sweat despite the crazy cold temperatures.

At the water’s edge, we get into our boats and slide into the river. We are surrounded by a coliseum of ice and snow. The water freezes to our boats and gear instantly, but we hardly notice. It is cold and quiet—and breathtakingly beautiful. 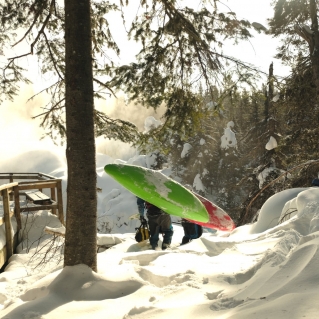 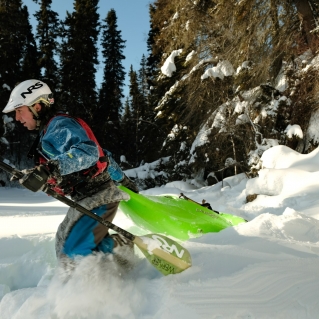 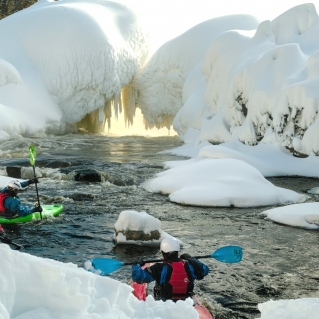 We paddle all morning until our faces and toes are frozen and our skirts are too iced up to get on and off. Back in the truck, we crank the heat to melt the ice so we can get out of our gear. We have never paddled in weather so cold, or a section of river so stunning.

On the long drive back to Winnipeg, I think about the weekend expedition and all the effort we put into paddling such easy whitewater. That’s when I realize, what I’d been missing all winter wasn’t just the whitewater, but the camaraderie that goes with it. The bonds grow deep when you rely so heavily on each other, when you experience unbelievable moments together and when you share hardship and laughs in almost equal proportion. 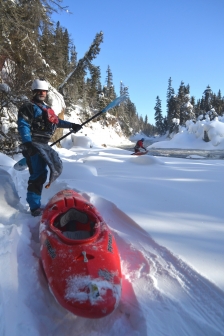 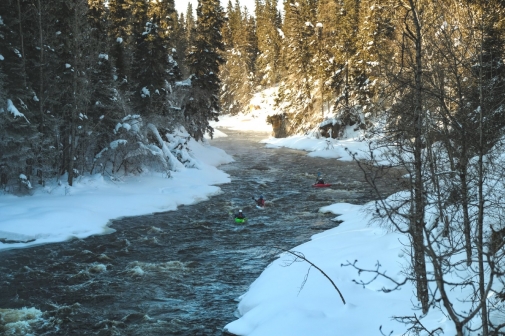 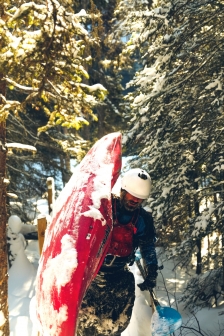 We are simple weekend warriors who like to explore wild places in our own backyard. And along the way, create the kind of friendships and stories that fill a lifetime.

After Note: Little did we know that this would be our last expedition as a group for the foreseeable future. While winter has ended for some and will soon be ending for us, we are facing another storm of sorts, COVID-19. We are housebound and putting our paddling plans on hold while we do our part to prevent the spread. I’m sure many paddlers are doing the same. There will be adventures again soon.