Pork and Taters on the Deschutes

From the bluff along the train tracks, my wife and I scout White Horse rapid on the Deschutes River. The routes aren’t clean. The layout is messy. Everything is sharp and menacing. About the time we talk ourselves into one line, we notice a rock hidden in the waves. Its placement changes our mind. But once we’re back in the raft and headed into the rapids, our run goes smooth. After a couple of miles of fun whitewater, the gradient calms to the tranquil flow that defines the Deschutes for most of its journey. 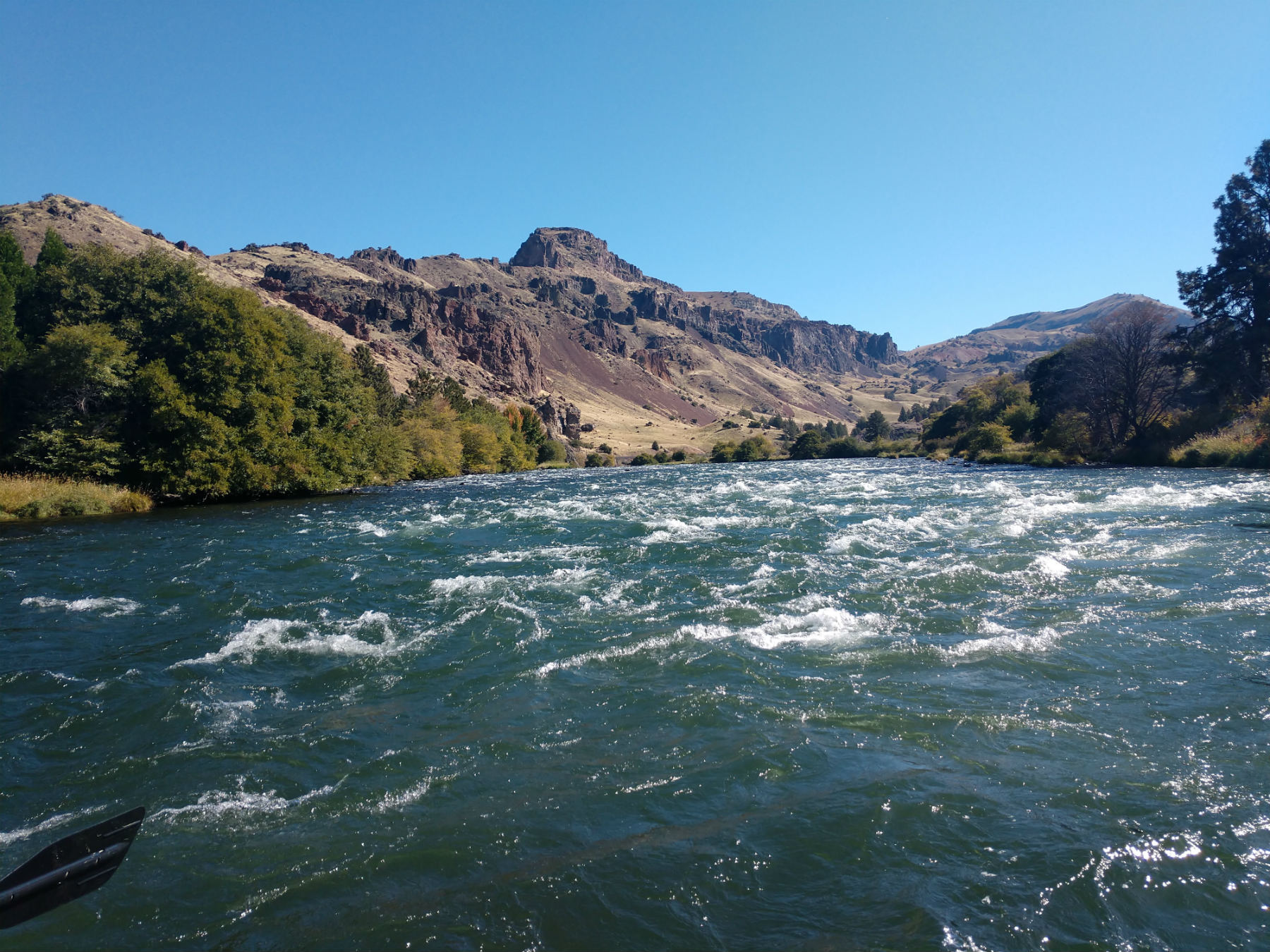 The scenery surrounding the Deschutes is a landscape of contrasts. Rolling hills give way to rocky cliffs. The river, cold and clear, bisects a hot arid landscape. At times you feel lost in the wilderness, then a mile later you find yourself going past a random house, road, or freight train. The signs of civilization aren’t as obnoxious or obtrusive as you would expect. Rather they serve as a nice juxtaposition to the country that surrounds them. Like using contrasting flavors with cooking, sometimes it’s the variety of scenery that makes a trip interesting.

We arrive to camp mid-afternoon at a spot called Buckskin Mary’s. Tonight’s dinner is a twist on the traditional meat and potato meal. For a lot of western rivers, including the Deschutes, fire restrictions prohibit charcoal cooking for most of the rafting season. So instead of baked potatoes, I’m cutting a sweet potato into medallions and making a sweet and savory sauce for both the potato and the pork. 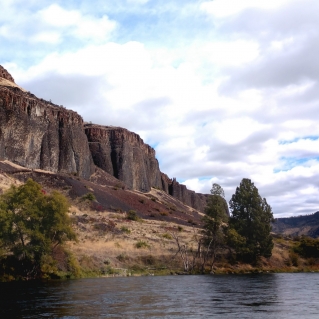 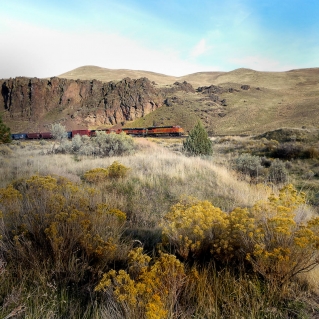 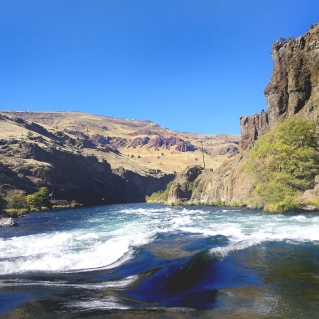 Marinade
This marinade is a good mix of flavors that compliments grilled vegetables, venison, beef and pork. If you reduce the amount of liquids, it’s also a good additive to everything from hamburgers to pimento cheese. Braggs Liquid Aminos is a fermented soy product that can be bought in most health food and larger grocery stores. If you can’t find it, soy sauce or tamari are good substitutes.

Mix all of the ingredients, minus the water, together and whisk or stir until smooth. Add only enough water to create enough marinade to cover the meat. Pour marinade over the pork chops and let sit for at least an hour. 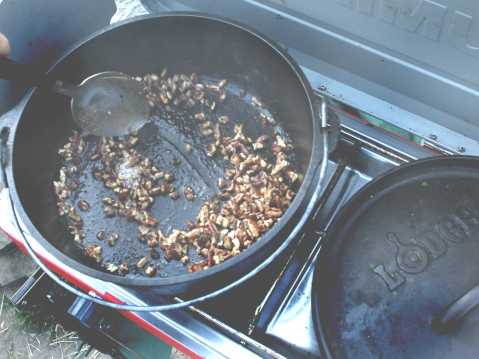 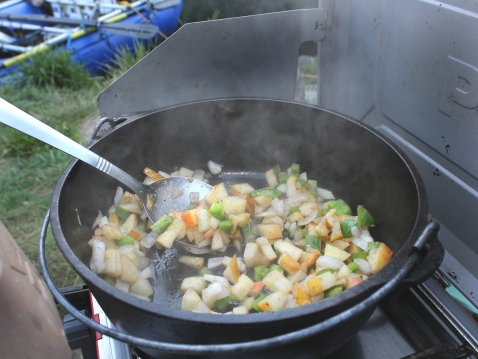 Sweet and Savory Chutney
I recommend topping both the pork and potato medallions with this sauce.

Melt some butter in your pot or Dutch oven. Add the pecans and stir to coat. Sprinkle with salt and continue stirring. The difference between toasted pecans and burnt pecans falls within a 30-second window, so keep them moving. After two or three minutes, pour the pecans onto a bowl or plate and set aside.

If needed, add more butter to the pot then pour in the onions. Sautee the onions for a minute or two until fragrant, then add the peppers, apples and pears. Cooking the onions first allows them to caramelize while not overcooking the fruit to the point that they lose their color. Stir everything to coat with butter. Add the bourbon, maple syrup, vinegar and salt.

Once the onions have browned and the fruit is tender, add garlic and cook for another minute. Cover and set aside. 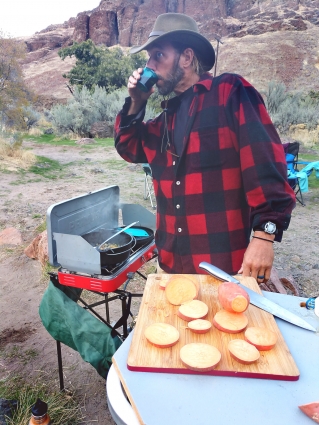 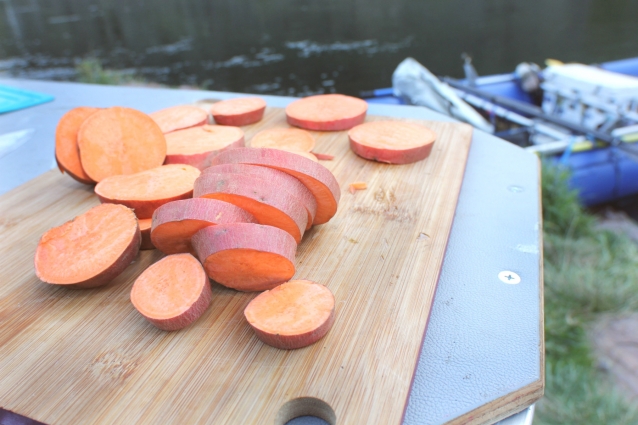 Sweet Potatoes
Cut the potatoes into half-inch slices. Use a paper towel to coat potatoes with oil or butter. Then sprinkle with salt and pepper.

If using a grill pan, note that the potatoes will get grill marks before they’re tinder. To ensure they cook evenly and thoroughly, turn them a couple of times. If you spin the potatoes 90 degrees as you flip the slices, you can heat each side twice and get nice hash marks. Once almost done, remove from grill. 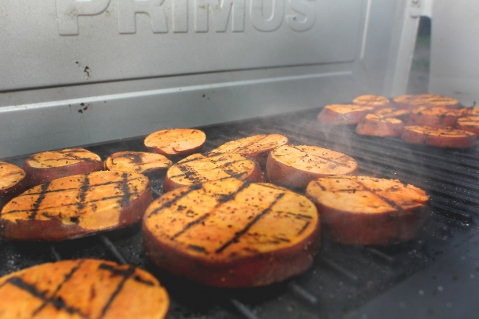 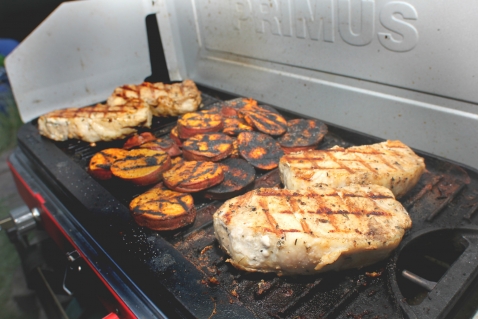 Pork Loin Chops
This is a great meal to prep ahead, whether that’s before you put-in or during the previous night’s dinner prep. Ideally, your pork can marinate for 24 hours. But if you only have an hour or two before cooking, then add additional salt to make the meat draw in the marinade faster. And by reserving some of the marinade in a separate container, you can also use it to baste the meat as you cook.

On high heat, sear the outside of the chops for one-two minutes on each side. Reduce the heat and continue cooking until almost done in the middle. If using a grill pan, spin the chops a quarter turn every time you flip them. As they cook, baste the chops with the marinade. Alternatively, you can pour a little water on the surface of the grill and let it run under the chops. As the liquid burns away it will steam the chops and keep them from drying out. When the meat is almost done, place the potatoes back on the grill, turn off the heat and place a loose piece of foil on top to let the chops rest and the potatoes re-heat.

Rest and re-heat for five minutes. Then, plate the chops and potatoes, top with the Sweet and Savory Chutney and finish with a sprinkle of toasted pecans. Toast your river family with the leftover Bourbon and enjoy! 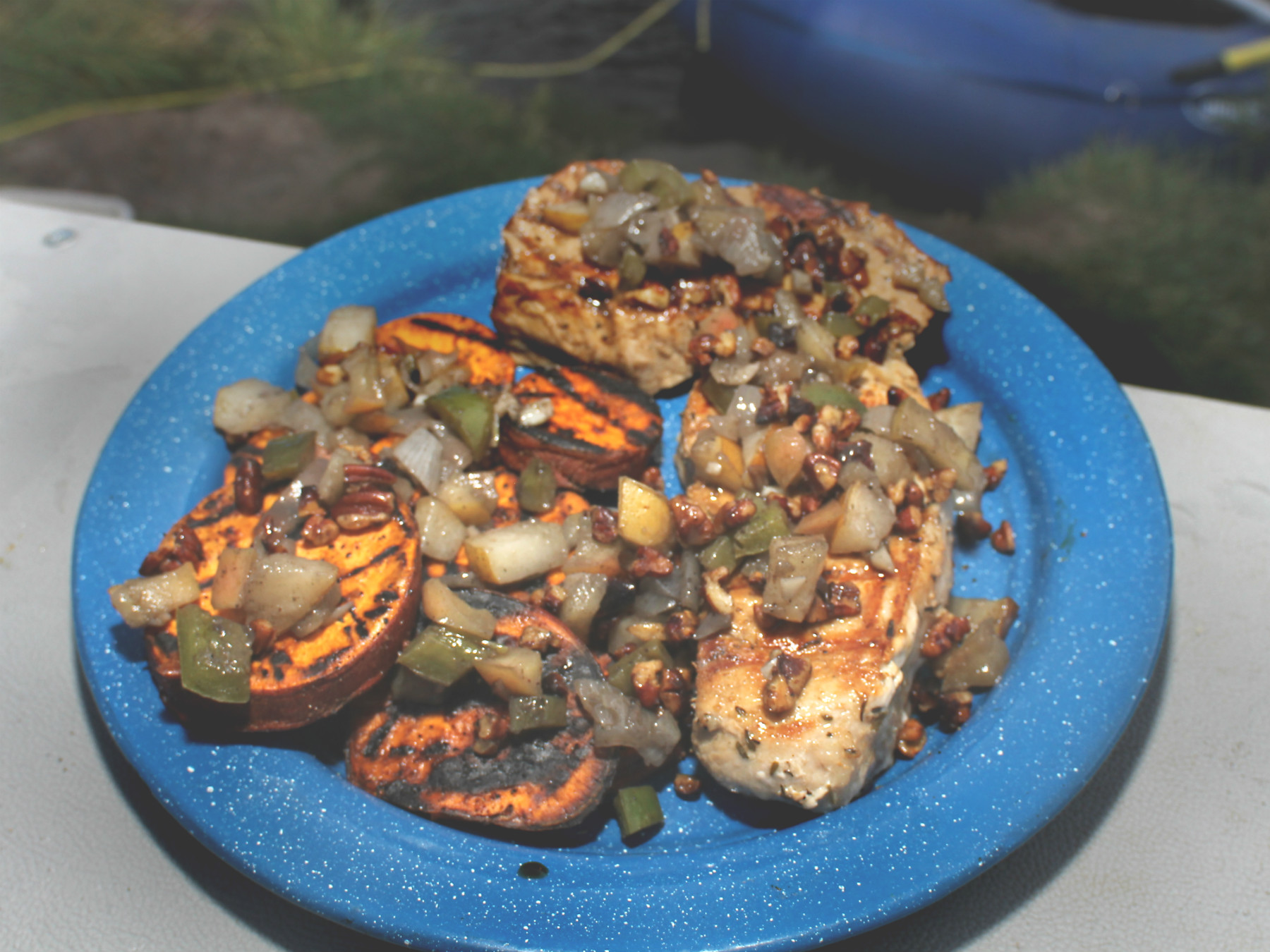 Every river trip has aspects that affect your menu. Whether it be group size, cooler space, dietary restrictions, or fire restrictions, it’s often necessary to rethink or revise our tried and true river meals. But in the process you may also acquire new favorite recipes for camp and home.