The Things We Carried

We carried river gear. So much river gear. At the Boundary Creek Boat Ramp, kayaks clattered down from roof racks, inflated rafts rolled off of trailers, and un-inflated rafts scrolled out of tiny hatchbacks. Frames were assembled and strapped to the rafts. Bundles of oars and paddles appeared alongside the boats. Duffels and drybags full of tarps and tents littered the ground. Water jugs lined the road like blue pylons. Cars, trucks and vans disgorged boxes and bags, which carried even more gear. Straps were piled in heaps. The gear snaked, in ragged lines, along the road to the boat launch, where it disappeared into boats or was carried, Sherpa style, down the switchbacks to the river.

We also carried anxieties: some of the common pre-trip variety, and some unique to our own circumstances. We also worried, even if we did not admit it, that one or more of us carried the Coronavirus. Consequently, we carried hand sanitizer. Lots of it.

We were a ragtag group, built out of family connections, far-flung friends and internet invites. Ages ranged from 15 to 72. A list of our occupations read like the beginning of a joke or a nightmare version of Noah’s Ark.

There were a pair of doctors, a couple of lawyers, a trio of teachers, a school counselor, a couple of students, a raft guide, a cabinet maker, a carpenter, a nurse, an art gallery owner, a retired journalist and political consultant, a sawyer, a wetland’s biologist, a demographic consultant, and a retired insurance agent. 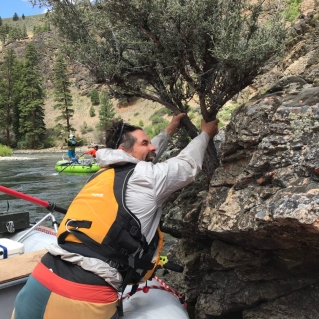 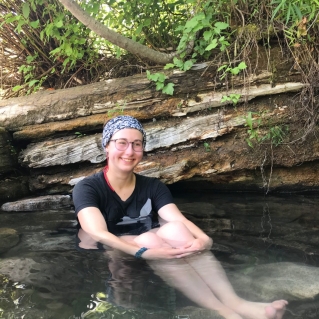 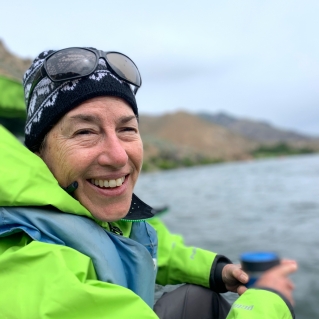 We carried food for 20, which included a pig’s worth of pork. On the trip, we would eat pulled pork sandwiches, pulled pork tacos, one breakfast would feature bacon and another sausage. We carried enough Dutch Ovens to cook Dutch Oven Cobbler, Dutch Oven Lasagna, Dutch Oven braised chicken with shallots, and Dutch Oven Cookie Pie. 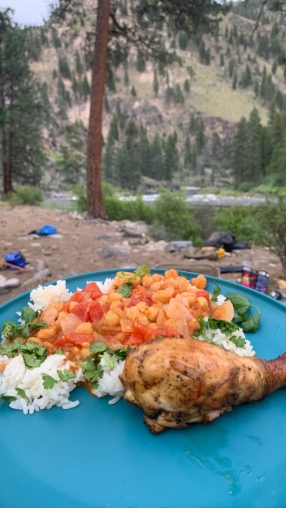 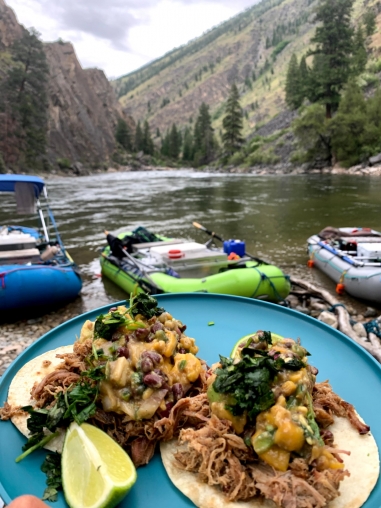 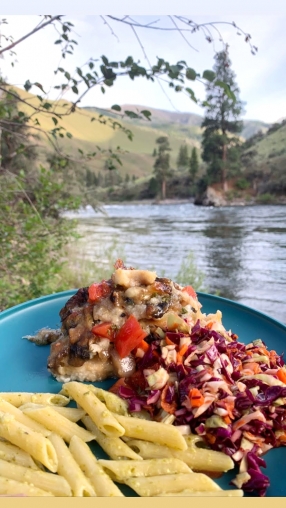 We carried beer and booze. So much beer and booze that someone suggested that we not carry so much beer and booze. That person would run out of beer before the trip was over, experiencing what some might call poetic justice. Twelve packs of beer were duct-taped for protection and shoved into all of the nooks and crannies of already fully loaded rafts. Beer trailed behind the rafts in drag bags. It was stored in the empty ash container. It found its way into drybags.

There were bottles of gin for gin and tonics. There were Liqueurs for…?  No one actually knew, because all the mixers and sodas were left behind on account of there not being enough room. Until his raft ripped, the cabinet maker carried some good whiskey. Everyone else, on account of the quantity of whiskey to be consumed, carried bad whiskey.

When the cabinet maker’s raft ripped on our first day, he was forced to derig all the things he carried. He drank most of his good whiskey at the first camp. The next day we found out that collectively, we carried enough knowledge and supplies to fix a large hole in a raft’s floor. 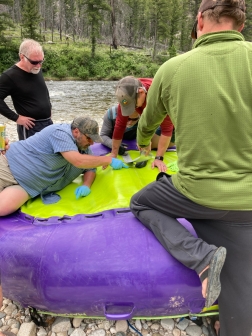 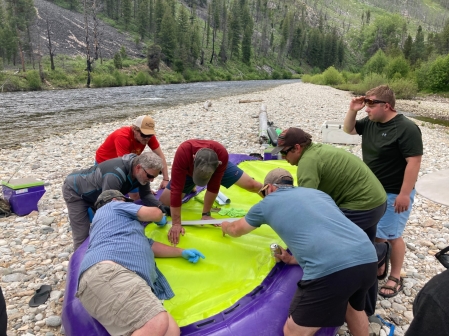 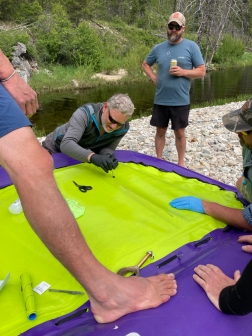 We carried ourselves to every hot spring on the river map. Even those that were a little out of the way.

We also carried swimsuits, which a group of twenty-somethings from Northern California did not. When their group hiked from their camp to Sheepeater Hot Springs, they, both the young men and women, slipped out of their clothes and settled into the hot water, naked. My fifteen-year-old daughter carried a teenage girl’s modesty, which required her to then leave the hot springs, blushing I’m sure. But now she also carried a new understanding of human anatomy.

Several of the men in our group carried enough “nostalgia” for being young and naked, that they stayed around to talk to the group of twenty-somethings as they all enjoyed the hot springs. 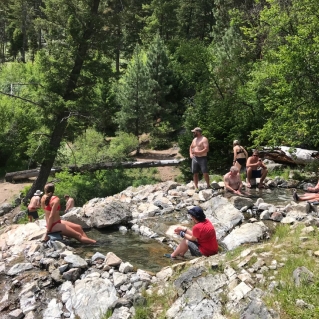 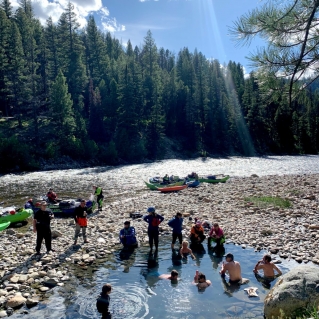 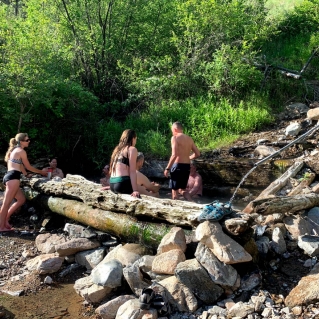 The art gallery owner carried a love for coffee so deep and abiding that a whole kitchen table was devoted to his coffee contraptions and thermoses. He also carried his fifteen-year-old daughter. Who, in turn, carried a shyness that she left behind camp by camp, which was fine since discarded shyness in no way violates the leave no trace ethics of river travel.

The ER doctor on the trip carried the major medical first aid kit. He also carried an energy that was, thankfully, one of the only infectious things on the trip. His wife, the nurse, carried their baby in a small bump that only appeared when she turned sideways. The two of them also expertly carried the young wetlands biologist from Louisiana, who, herself, carried a love of fly-fishing, a strong dislike of being cold and an apprehension about whitewater.

The other a doctor and her husband, the lawyer carried a ton of brand new gear for what was a fairly new hobby. But also, I think, carried a growing love for their new place in the world.

The carpenter from Colorado carried a laugh that woke us up every morning.

The 72-year-old retired insurance agent and safety kayaker carried a nearly bottomless repertoire of campfire songs and a guitar. Not many of us, however, could carry a tune, but we all sang anyway every time the guitar came out. 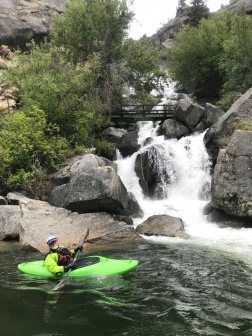 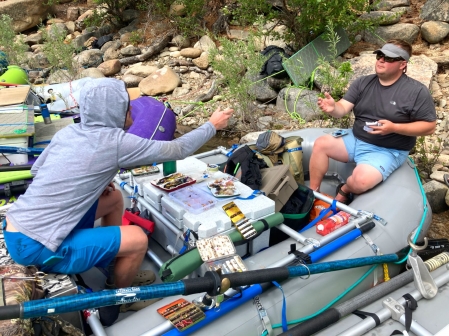 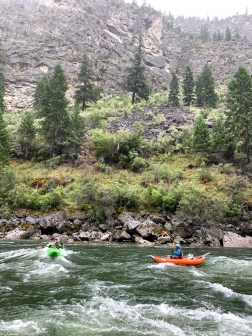 The twenty-year-old raft guide carried a carefree grace and an authentic love of whitewater. She expertly paddled a ducky the entire length of the Middle Fork.

The school counselor carried a heart of gold and listening ear. The sawyer was happy to carry a fly-rod and not a chainsaw for a week. The trip leader carried enough sense to lead when he was the right person for the job and defer when he wasn’t.

The retired journalist and political consultant carried some great stories, which he could tell with journalistic detail.

At cocktail hour down on the boats in the early evening, the only storytelling requirement was that the teller had to tell “the long version.”  The lawyers would interrogate the teller and investigate every lead. And, when some aspect of the story felt abridged, they would demand digression. 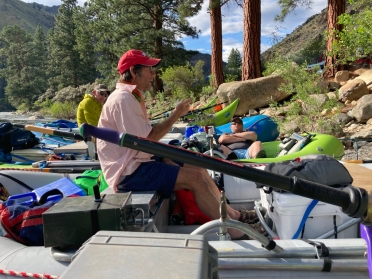 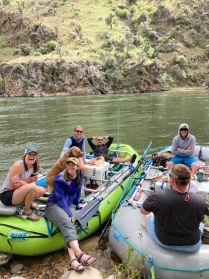 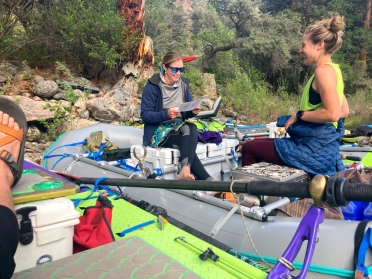 I always carried my fifteen-year-old daughter in my raft. This meant that I carried a constant concern for her safety and a respect for each rapid and rock in the river. But I also carried the knowledge that this trip might be one of her most enduring memories of her dad. On the trip it was revealed that there were people who had lost a parent too early, which served as a reminder for me that I wanted my daughter to carry a memory of me at my best and happiest. 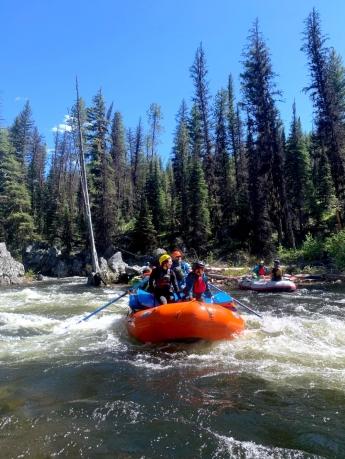 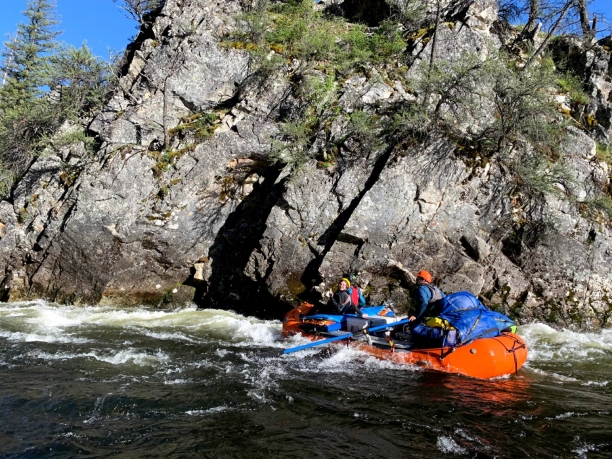 Every day, we carried all of our gear off of the boats and into camp in the afternoon and back onto the boats in the morning. But nobody complained. All the gear was useful, and, more importantly, we always knew what we were carrying, which isn’t always true in life. For example, when we grabbed the groover, we knew it was a box filled with shit. Sometimes, in life, you pick up something thinking it’s important only to realize much later that it’s a box of shit.

To be sure, all of us carried worries and problems. And if we didn’t have enough, this last year supplied some. And while the river didn’t magically fix any of our troubles, for six days, it carried them, so we didn’t have to. And that’s magic enough.