The Wild and Scenic North Umpqua River runs a 34-mile cross-section in Oregon, on the 43rd, north parallel. Brazenly plunging around vertical rock cliffs, it drops out at 30 feet per mile. Mountain meadows, hemlock and sometimes burnt douglas-fir forests comprise its riparian zone. It’s a timber tunneled thoroughfare to wily steelhead, salmon and tenacious paddlers alike. Slicing through emerald waters from Horseshoe Bend to Gravel Bin with Isabel Louise Rodhouse, I can see she is every bit as wild and scenic as the rivers in which she paddles. 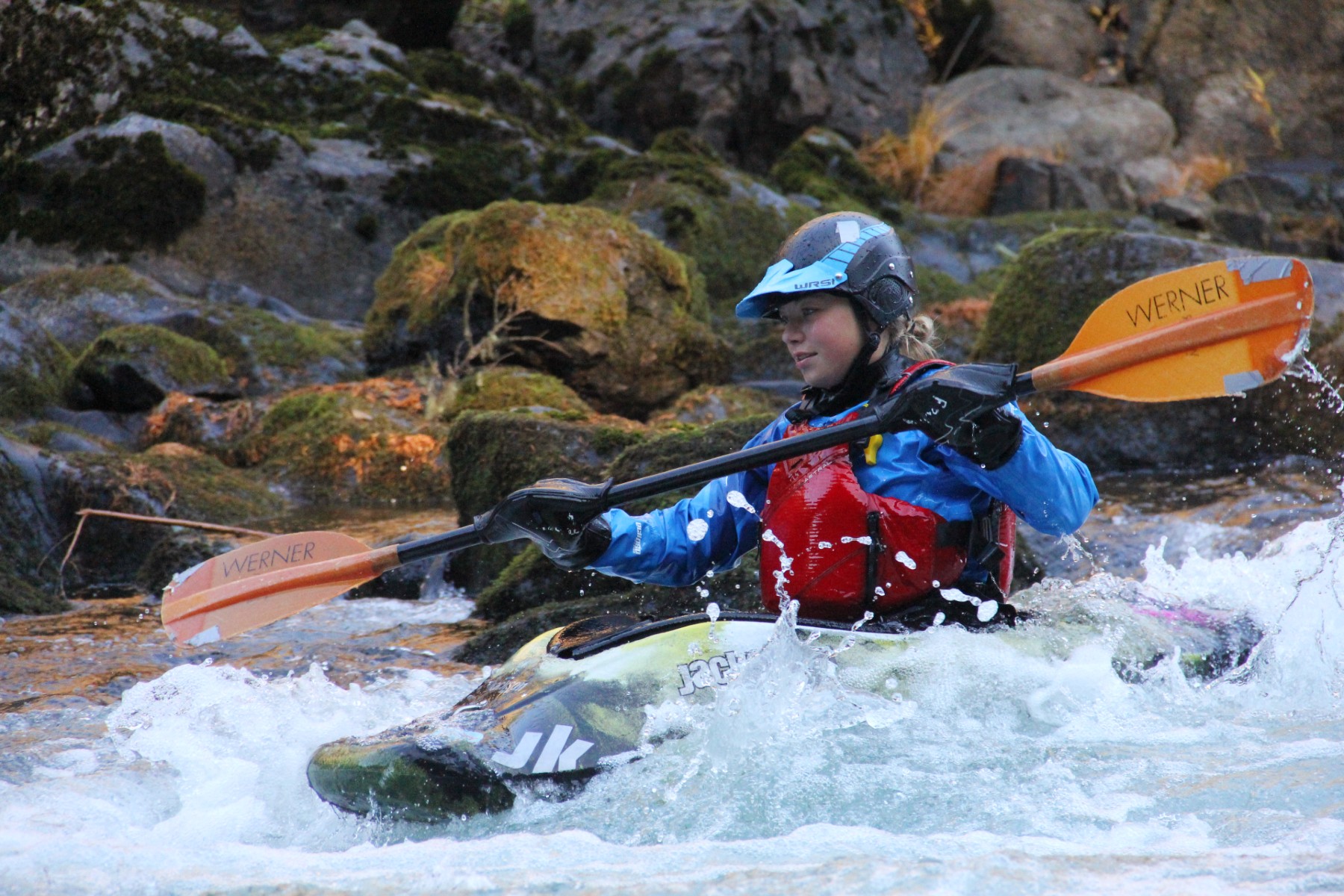 This whitewater wonderkid keeps father and mini-me kid sister in toe, rounding boulder choked channels into splashy drops on class IV Pinball Rapid. Isabel is like a merry river otter surfing, diving and performing a ballet in aerated waters. Bright eyed and bushy-tailed, her ease and glee seem to compliment the waves like sunshine. As a late-in-life-learner of many sports, including boating, I am in awe watching her consistently channel effortless mastery on the water. Perhaps it all starts with the foundational Rodhouse family motto: Clean underpants and a good boof stroke.

One could attribute Isabel’s dexterity navigating rushing water to her early introduction to the sport at summer camp. “Going into camp I had no idea what whitewater was,” she says as she reflects on her ten-year-old self and that summer. “But the first time we got on the water I just fell in love with the sport. Going through actual whitewater was the best feeling ever. I couldn’t and still can’t get enough of it.” The first rapid she sent was a little hometown high desert riffle, Bill Healy Rapid, on the townie section of the Upper Deschutes River just outside a wild and scenic corridor. 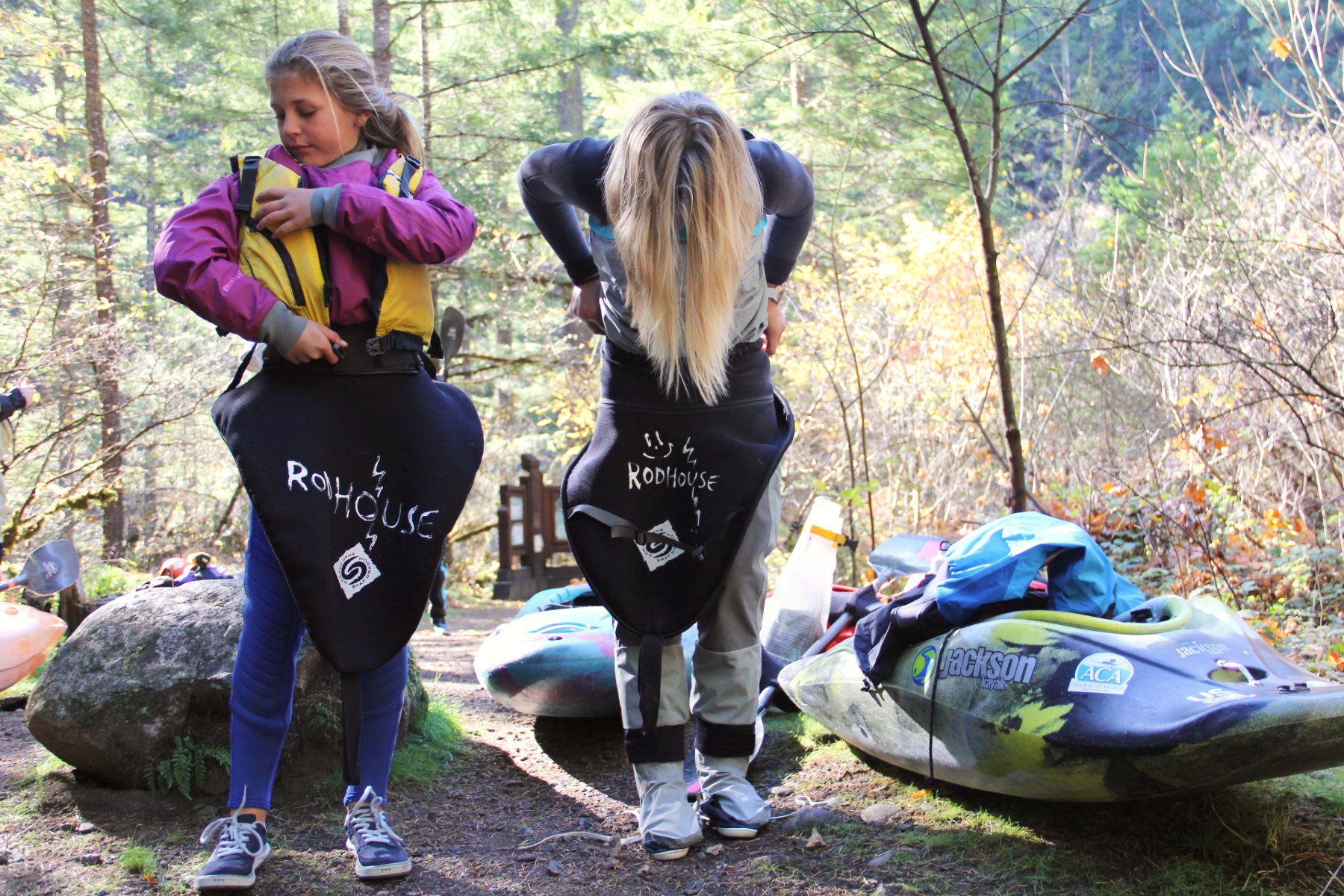 Hailing from the state of Oregon, which has the most wild and scenic river designations in the nation—59 to be exact—could be the draw in her propensity for paddling.

Today, at 15, she’s dropping falls and creek boating. “I would classify myself as a solid IV+ boater,” she humbly notes. “I have [sent] some class V rapids but I don’t make them look very good [smiley face emoji].” Having witnessed her skill up close, my two cents is she’s exceptionally talented and equally as humble. 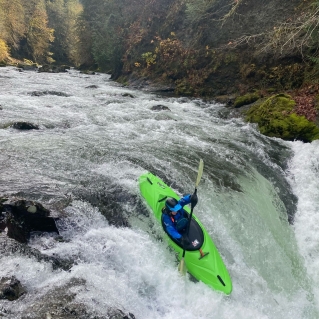 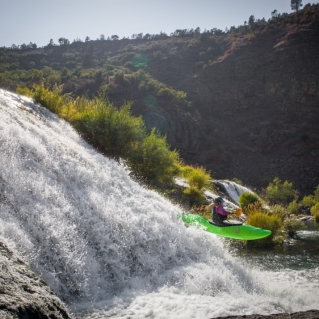 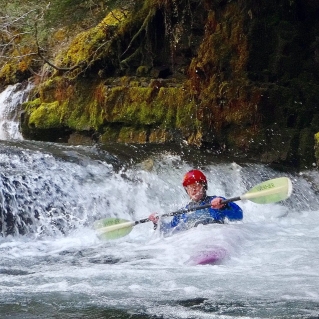 Canyon Creek is easily in her top three favorite rivers of all time. Packed into a beautiful canyon, the run is pretty much stacked 5-10-foot ledge drops plus a 17-foot waterfall called Big Kahuna. As she considers the most difficult section, she brushes off the waterfall and says, “Probably the rapid called Boulder Garden. You have to go through a pretty steep section that plunges right into a big hole which is intimidating. The funnest [sic] move is probably a series of big drops called Champagne.” She’s also braved many stretches of the iconic White Salmon River including Husum Falls, one of the tallest commercially rafted waterfalls in the world.

Circling back through her highlight reel Isabel pauses on Opal Creek. “Opal Creek, in the Opal Creek Wilderness, is such a precious waterway,” she says. “It’s so narrow, cold and blue.” In contrast, Pit One in California is highly regulated and there’s only enough water released to boat a few weekends out of the year. “It has a waterfall, water slide and fish ladder, which are all really fun to drop,” she says. “And once when I ran it, water never actually released, so we kayaked at super-low water and the only thing that was safe to run was the 8-foot slide.” 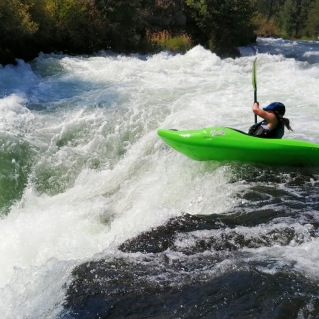 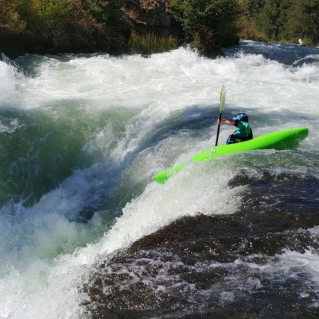 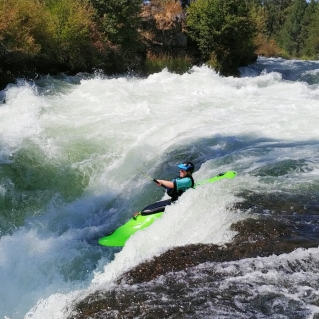 Exploring closer to home, Isabel lives in arguably the nation’s epicenter of outdoor sports: Bend. And, in terms of whitewater, the Central Oregon high desert demands refined technical blade skills because the only whitewater within close proximity fall in the class III+ to IV+ range. These include Upper and Middle Deschutes River sections notable for bony class IV+ hydraulics with cheese grater lava rock like Meadow Camp, Riverhouse, Lava Island Falls and Steelhead Falls. All of which Isabel has styled in her boats of choice: Wake Tutea for creeking, Dagger RPM for an all-around boat and the Jackson Rockstar for playboating. She foresees more half slices on the horizon.

When she isn’t boating? “To be honest, I do as many sports as I can,” Isabel shrugs. “My favorite right now, outside of kayaking, is climbing and I have been training really hard for skiing. I also practice jiu-jitsu.” A rockstar of many disciplines, while she is fully capable of playboating, Isabel loves cross-training by surfing (board, not boat) on the in-town standing wave. Coincidentally, only a couple of months after Isabel’s first whitewater experience on Bill Healy Rapid, the man-made Bend Whitewater Park was minted just a mile downstream. 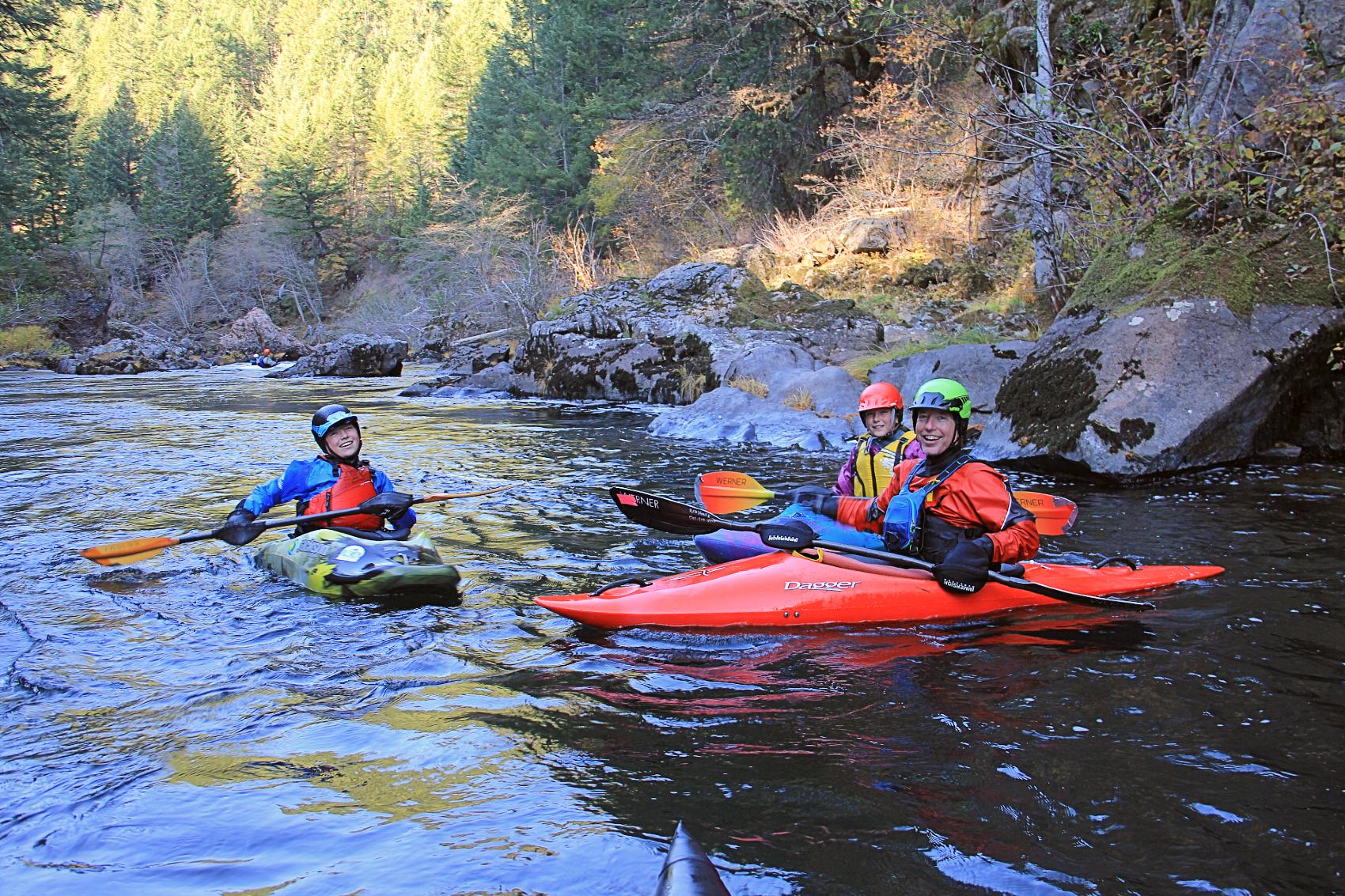 Unlike my own origin story, for female teens growing up in an outdoor recreation paradise like Bend, it’s not that unusual to spark paddling passions so early. And, in fact, she’s pretty par for the course in terms of a ‘normal’ Bend high school girl. She sees a potential future in teaching differently-abled students life skills, which she enjoys doing at her school, Summit High.

Though motivated to help others, by her own admission, Isabel’s first love is her kayaking community. “I love the people within this sport, everyone is always helping each other. My paddle hero is Nouria Newman. She is so inspiring, and she runs the most insanely cool rivers and goes on amazing adventures, which is what I aspire to do in my life. I like it when I see other women getting after it.”

Like paddle shero Nouria Newman, Isabel is down to Earth, beams pure devotion and seems unsullied with ego. “My goals for paddling,” besides running insanely cool rivers, “are to get really confident with hand roles and holding my breath longer. I would love to paddle some rivers in the east and abroad like Chile or New Zealand. In terms of accomplishing things in the future, I want to keep having fun outdoors and share those amazing experiences with others.” 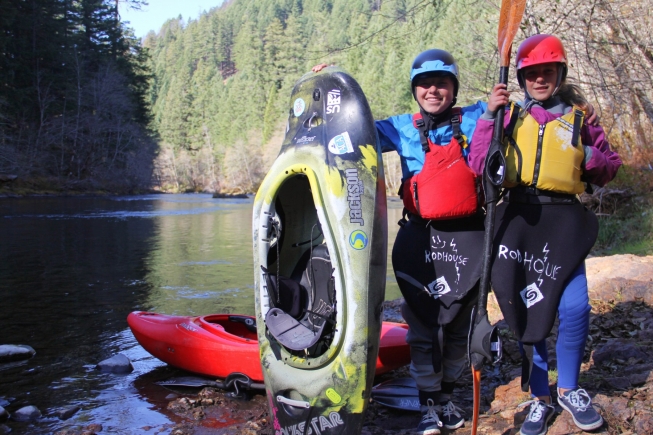 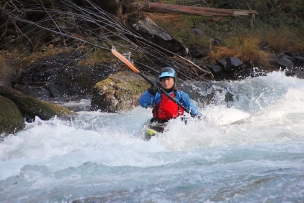 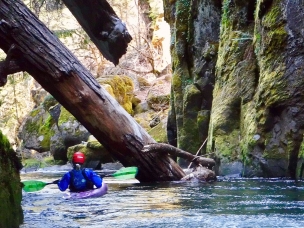 Her advice to other women wanting to break into the current: “Call your own drops, choose your own adventures and,” she generously adds, “bring the boys along with you.”

If I had to place bets, I predict she takes a gap year (or two) and explores the life of a dirtbag kayaker, traveling and paddling half slices all over the world. Probably with a gaggle of fan-boys entranced by her instinctive connection to the water, coolness in the wake of accomplishments and to-die-for thick blond ponytail. Send it girl. Can’t wait to watch from the sidelines. Please post on social media.

Consuming whitewater through a screen on her rest days only seems to bolster Isabel’s intuitive ability to meld and flow with hydroscapes. Emitting a mix of bold belonging and nonchalance unique for her age, to the viewer’s eye, this budding siren is indistinguishable from her wild and scenic river backdrops. 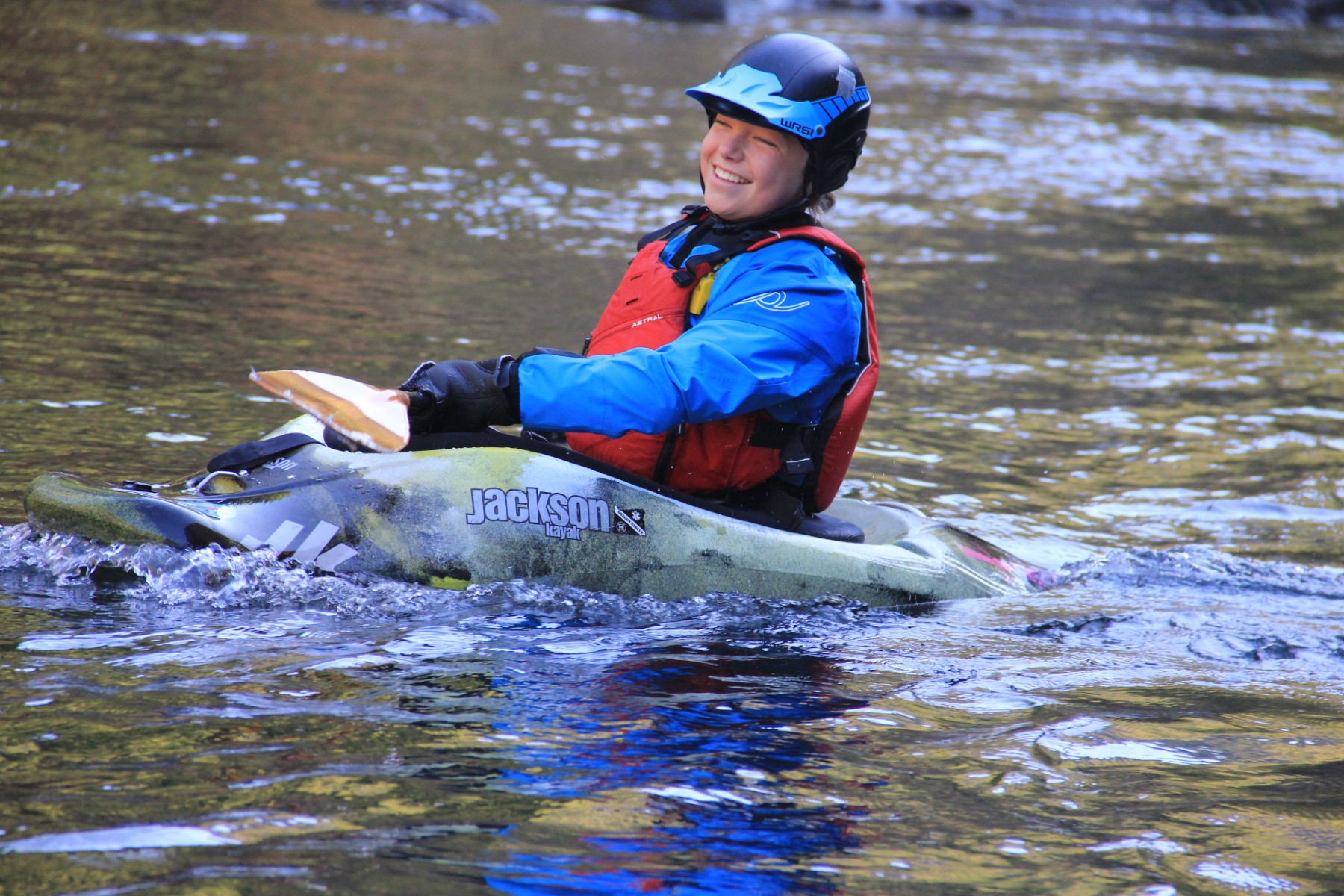 Born and bred with a boof stroke. The opportunity to interview and observe female boaters, like Isabel, blazing river trails locally and in the greater whitewater community is not only inspiring, but necessary in shepherding alternate realities for women and girls. Although I am her senior by decades, Isabel is undeniably one of my sheroes and a role model. She embodies a new reality that was not available to me when I was her age. Less tainted with ‘no girls allowed’ signage, she is the new wave of female narratives I’ve been waiting patiently for in outdoor sports. As a writer, I want to highlight, broadcast and protect her story, as though it were a precious stretch of wild and scenic river.