Kayaking the Kwanza River: Behind the Scenes in Angola

There have always been rumors floating through the kayaking community of a river on the same scale of the Zambezi, laden with rapids but hidden behind the bureaucracy of an African government. The name—Kwanza—had long been whispered. Africa’s fourth largest river, and arguably the sister river of the Zambezi, the Kwanza River hosts a drainage that stretches nearly 1,000 kilometers and drops over 1,500 meters as it flows through Angola before dumping into the ocean at Barra de Kwanza. 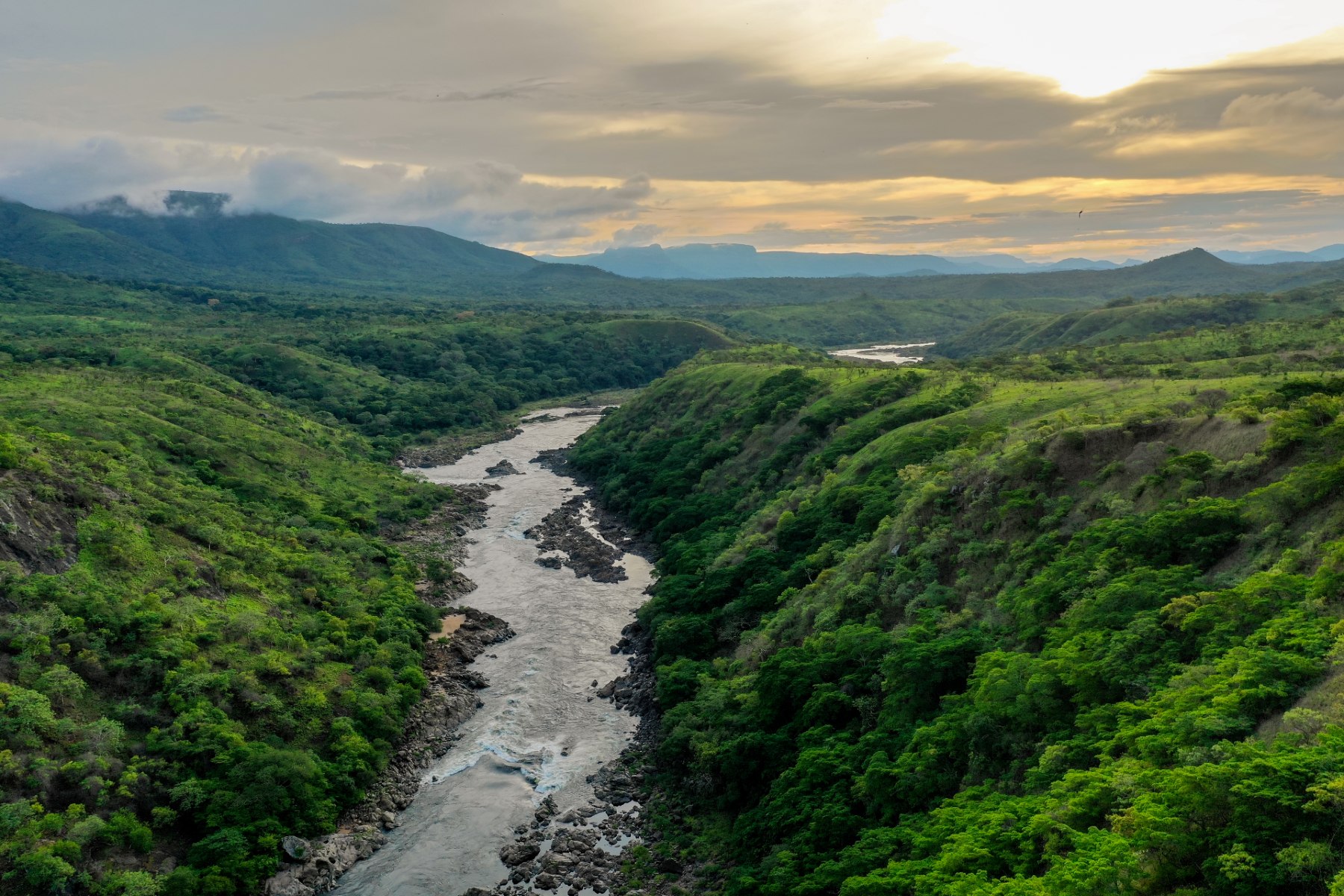 I had been trawling through countless maps, scrolling across the planet on Google Earth searching for new rivers, new places to get out and explore. And then, I stumbled across the Kwanza while flicking through an old history book. An image caught my eye—a giant rapid and a story about the ambitious hydro plans. A quick search and some conversations lead to the discovery of endless whitewater for those willing to explore. And while Angola’s geography creates the perfect environment for an abundance of rivers that drop off the edge of the Bie Plateau into the Atlantic Ocean, it had never crossed my mind as a location for my next expedition.

In a sense, the Kwanza was on borrowed time. Kayakers weren’t the only ones drawn to the river. In fact, there were already four completed hydro-electric projects on the Kwanza, with a fifth well underway. The Kwanza originates in the Bie Plateau, which feeds the Okavango Delta as well as three of Africa’s four major river systems, including the Congo and the Zambezi. As the Kwanza winds its way to the Atlantic Ocean it cascades through some steep and remote gorges. And it plunges over 1500 meters on its 600-mile journey through the heart of Angola. 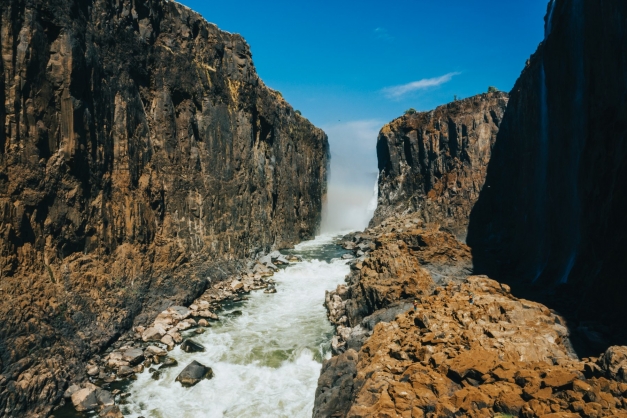 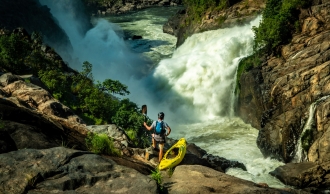 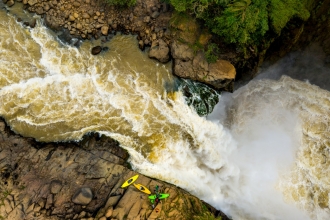 Its remoteness and untouched flows mean the river is filled with crystal clear water, providing life to Angola. The upper reaches provide fish, drinking water and irrigation for the local communities, while farther west its role changes to supply energy via the countless dam projects. One can only imagine what whitewater goodness was drowned beneath the deep flat man-made lakes.

The Expedition.
Our plan was to travel to the Malanje province north of Lunada, Angola’s capital city, and attempt a descent on the Lucala Gorge. As the damming projects continued, we knew it was an optimistic and ambitions plan, but with no information available to the outside world and no idea when the dam construction would begin sucking the life out of this monstrous river, the time was now. The expedition was significantly more than a kayaking trip. The journey took us, South African Dewet Michau, Brit Jake Holland and myself, through South Africa, Botswana, Zambia and Namibia before entering Angola. The adventure began long before reaching the river, as we traveled across the remote, undeveloped regions of half a continent. 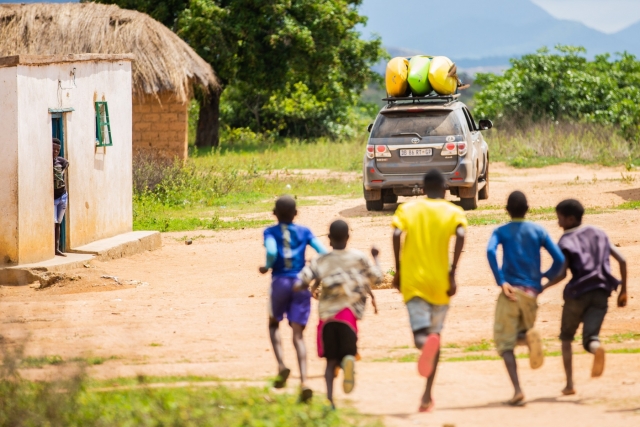 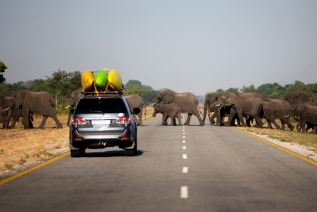 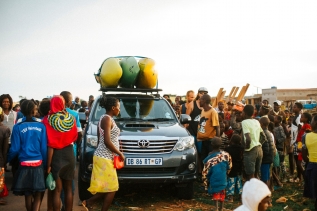 The Lucala Section is the final whitewater section on the Kwanza that’s free of dams. However, it’s wedged between two gigantic dams: The Cambambe Dam and the Campande Dam. The upper gorge is strictly off-limits due to military presence and below, the construction of the Lucala dam is in full swing. When it’s finished, it will back flood the upper gorges drowning the whitewater.  Below the Lucala dam, the Kwanza is known for its abundant concentration of diamonds causing a scattering of illegal diamond mining camps and state-sanctioned military operations on the riverbank. It’s a hive of activity with many questions asked of those lingering, especially with three bright-colored kayaks. 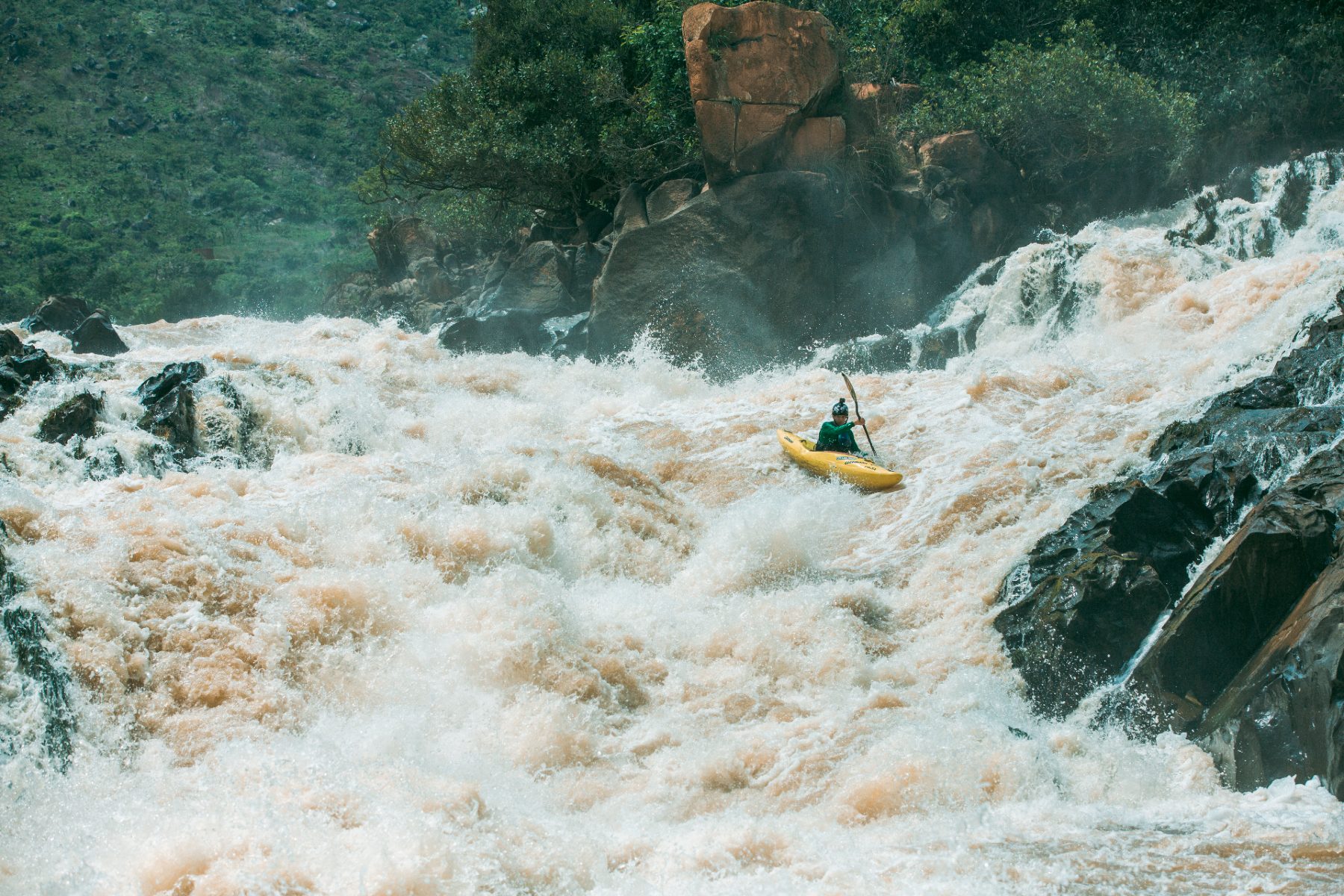 Planning and Preparation.
Exploring a new region always comes with its share of challenges, none more than an expedition to a country hidden under layers of political instability; a country emerging from a horrific 27-year civil war, burdened with corruption, chasing economic progression and growth to harness the power of Angola’s natural resources, as well as the wildlife and rapids that sit hand-in-hand with an African odyssey. No matter how much planning and preparation you put in, it’s never going to go as planned.

For us in Angola, it quickly became a game of patience as we drove toward the goal of the expedition, the Kwanza River. Arriving in ‘Dondo,’ a derelict town on the edge of the lower reaches of the river, we noticed a significant amount of military presence in the area. Immediately, we grew concerned about whether we would even be able to get to the river, let alone kayak it. The layers of authority seemed to stop any attempt to get near the river. Suddenly, we faced the realization that we had traveled over 4,000 kilometers through five countries and the river, only meters away, could be off-limits. 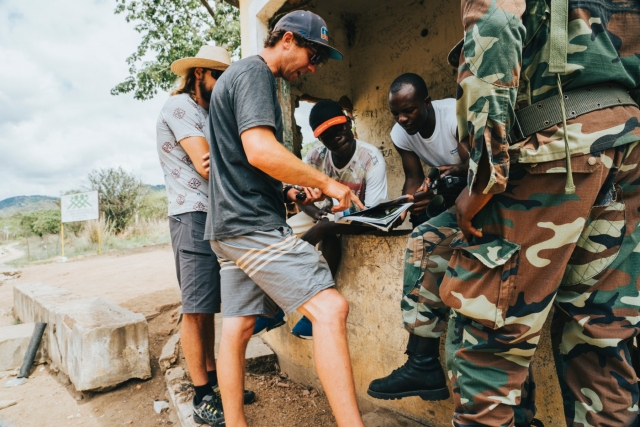 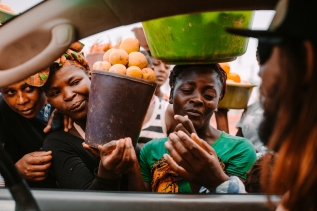 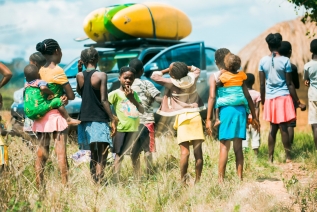 We had a difficult decision to make. Do we go for it without permission knowing the consequences or try to navigate the political landscape to get the rubber stamp? We went for the latter, and for days we weaved our way through our Angolan contacts and networks to get an elusive permit. In times like these it’s vital to stay upbeat, optimistic and relaxed, and remember to be as patient as possible. As soon as you get angry you lose. And inevitably, it always works out.

The People.
Adventure kayaking is about an all-encompassing experience for me, not just the paddling. It’s about the people you meet on the way, the beers you share and the good times on the river. Despite the perceived misconceptions almost all of the people you meet on these journeys are incredibly friendly and hospitable. The ability to fully immerse yourself in a country through kayaking is a unique part of the expedition game. Often, you’re heading to places that are largely unvisited, meeting people far removed from the tourist trail and Angola was no different. 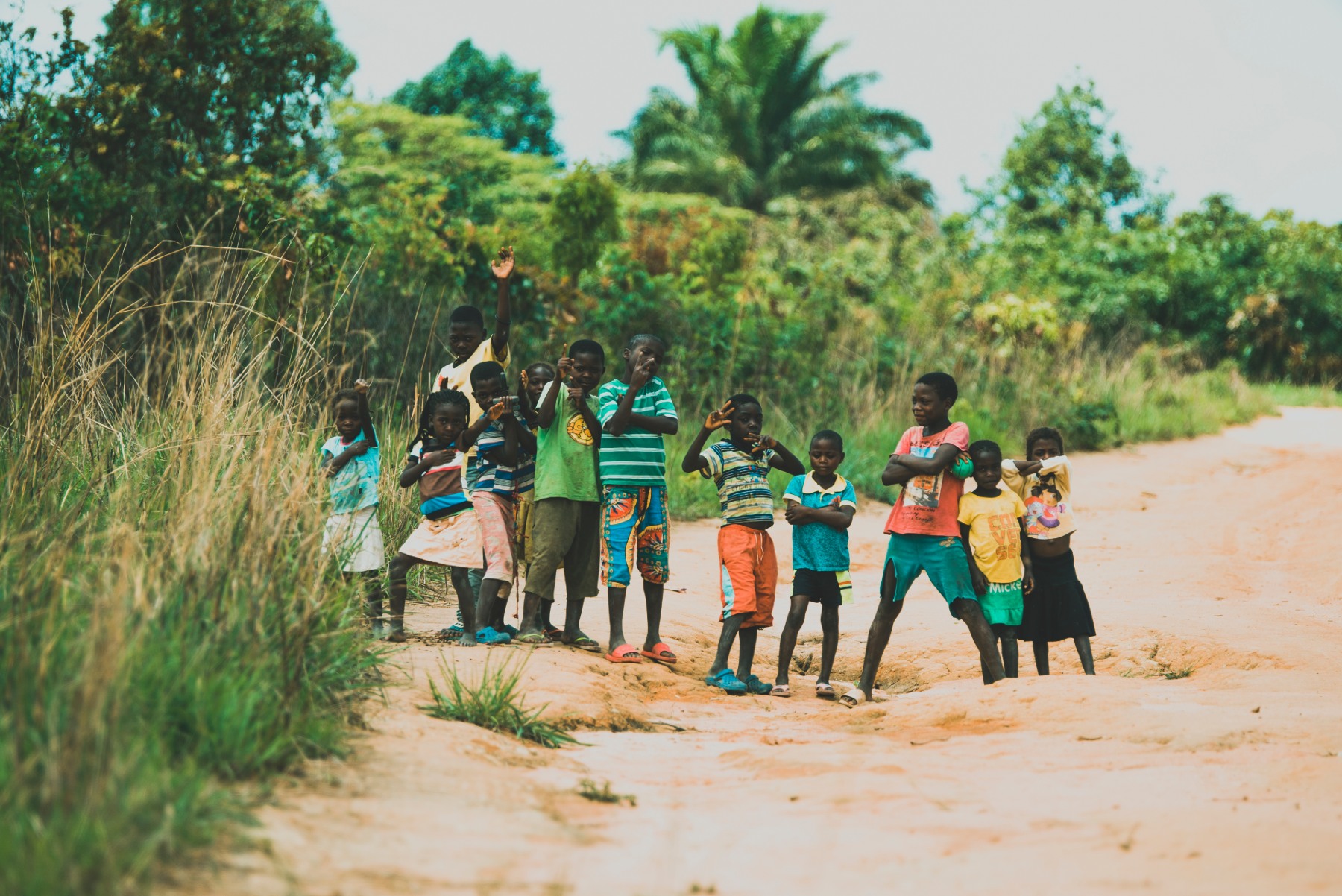 As we made our way across the southern African continent tensions built, our imaginations ran rampant picturing a hostile, war-torn wasteland. Once in Angola, our anxieties dissipated. We were welcomed by a ruggedly beautiful country filled with the smiling faces of the Angolan people who showed us nothing but kindness and curiosity. Despite its promise, a kayak expedition here is intimidating, to say the least, with many factors that continually kept our team in check.

Remnants of the brutal civil war that ravaged the nation in a battle for power laid to waste everywhere. Millions of unexploded landmines still cripple communities and forced us to stay on the beaten track. Though most of the large wildlife had been eaten during the war, a high concentration of crocodiles remains, fattened by 27 years of death and destruction. Then there was the human factor: bandits, armed robberies, corrupt officials, illegal mining, and a considerable amount of munitions 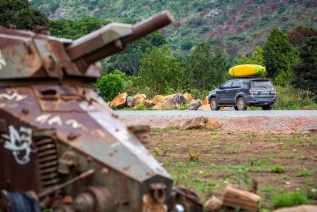 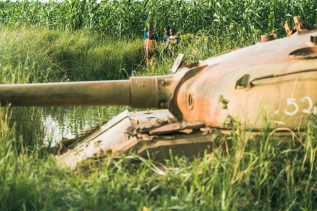 In route to the Kwanza, we detoured off the main road toward the Keve River, a stunningly beautiful river that flows parallel to the Kwanza, neglected by the powers of modern energy needs and development. It’s a truly wild, isolated and unexplored place that basically flows off into nothingness. The road up to the Keve River slowly became ever more isolated as we traveled inland toward the Bie Plateau, the Angolan highlands and the put-in of the river. We drove deeper into rural Angola.

Two days later, in the heart of the descent, in the middle of nowhere, we set up camp one evening on the shores of the Keve, two locals wandered over, grasping some branches fashioned into fishing rods. They appeared to be excited and fascinated by what we were doing, kayaking down a river that they had spent their life next to, though the rapids they avoided and seemed to fear.  We spent an evening sitting together, sharing food and gestures, unable to communicate in either parties’ language. In the morning, they were there to wave us off as we headed downstream and out of sight, most likely never to see each other again.

For four days we used the river as our road and traveled through some of the most remote parts of Angola working our way back to civilization. 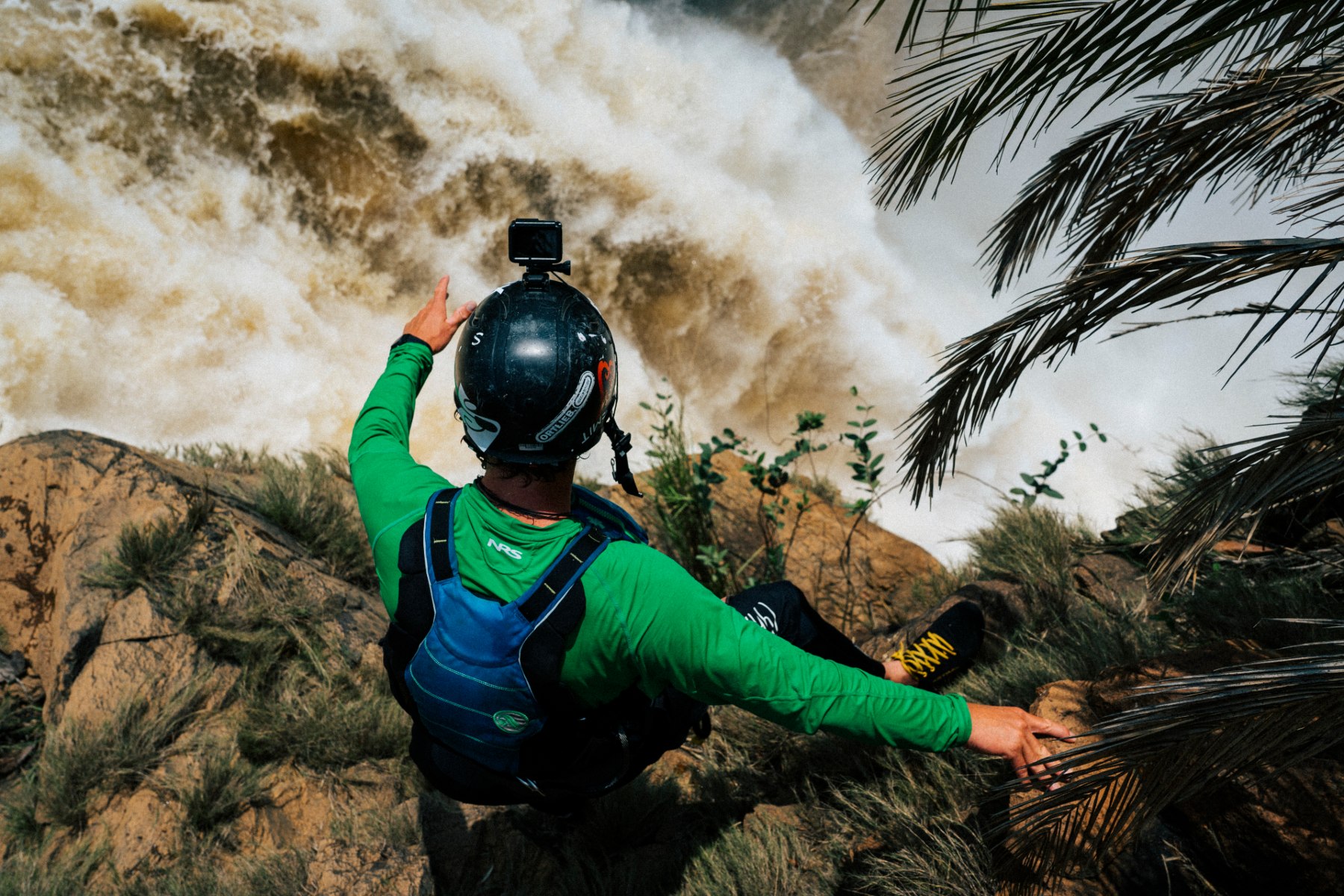 Editor’s Note: Kwanza: The Drowning Diamond of Angola, the film that inspired this story, won Long Film of the Year at the 2021 Whitewater Awards. Watch it now on Vimeo On Demand.