A SUP Source to Sea on the Saco River

If I had a really strong arm, I could throw a rock to the Saco River from my house. I’ve driven by it countless times on the way to town and spent lots of lazy summer afternoons floating along with its easy-moving current. It’s the perfect river to spend time in, clean sandy bottom, and trees hanging over the water with rope swings dangling from them around every corner.

Each summer our small town of North Conway becomes the epicenter of summer vacations here in New England. Urbanites make long drives to spend their weekends on the Saco. They stake their summer claims, shoulder to shoulder with their fellow vacationers. Perhaps, more comfortable in a crowd than all alone in the quieter stretches of water. 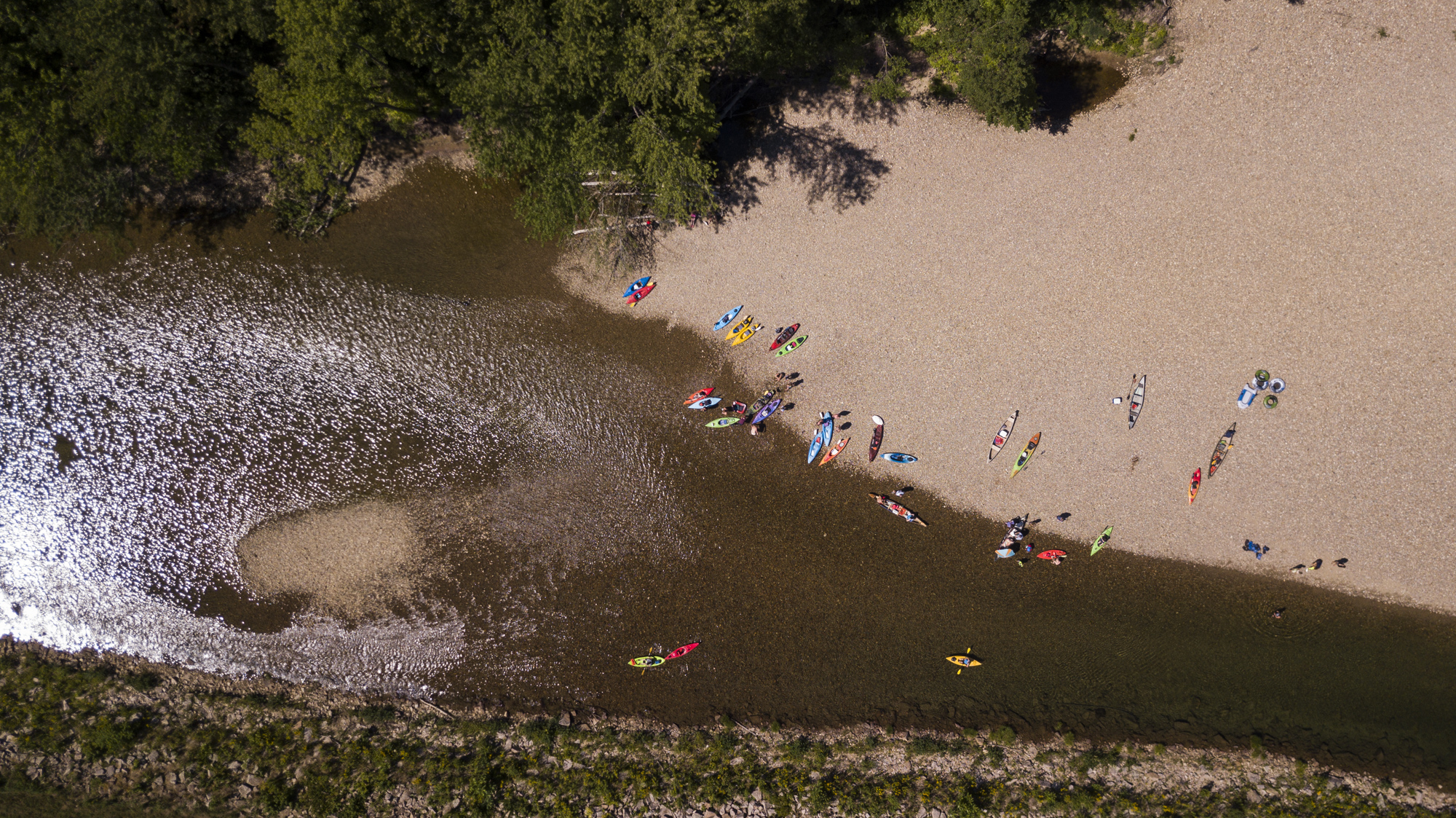 Thankfully that chaos doesn’t start until early July. Before then, on most years, the snow high in the White Mountains lingers, trickling its way into the river keeping it cold, too cold for drinking beer in. Spring rains inevitably surge down from the mountains, across the wide grassy intervals, and fill the flood plains with cold, murky water discouraging most from considering an afternoon paddle or swim.

So, there’s a sweet spot in the middle of June, a quiet time on the river, an ideal time to pack a paddle board with camping gear and see the whole river from the mountains to the ocean. Traveling a pathway of big sweeping arcs cut into farm fields, slowed by dams, and through rips and rapids that have been pushing to the ocean for thousands of years. 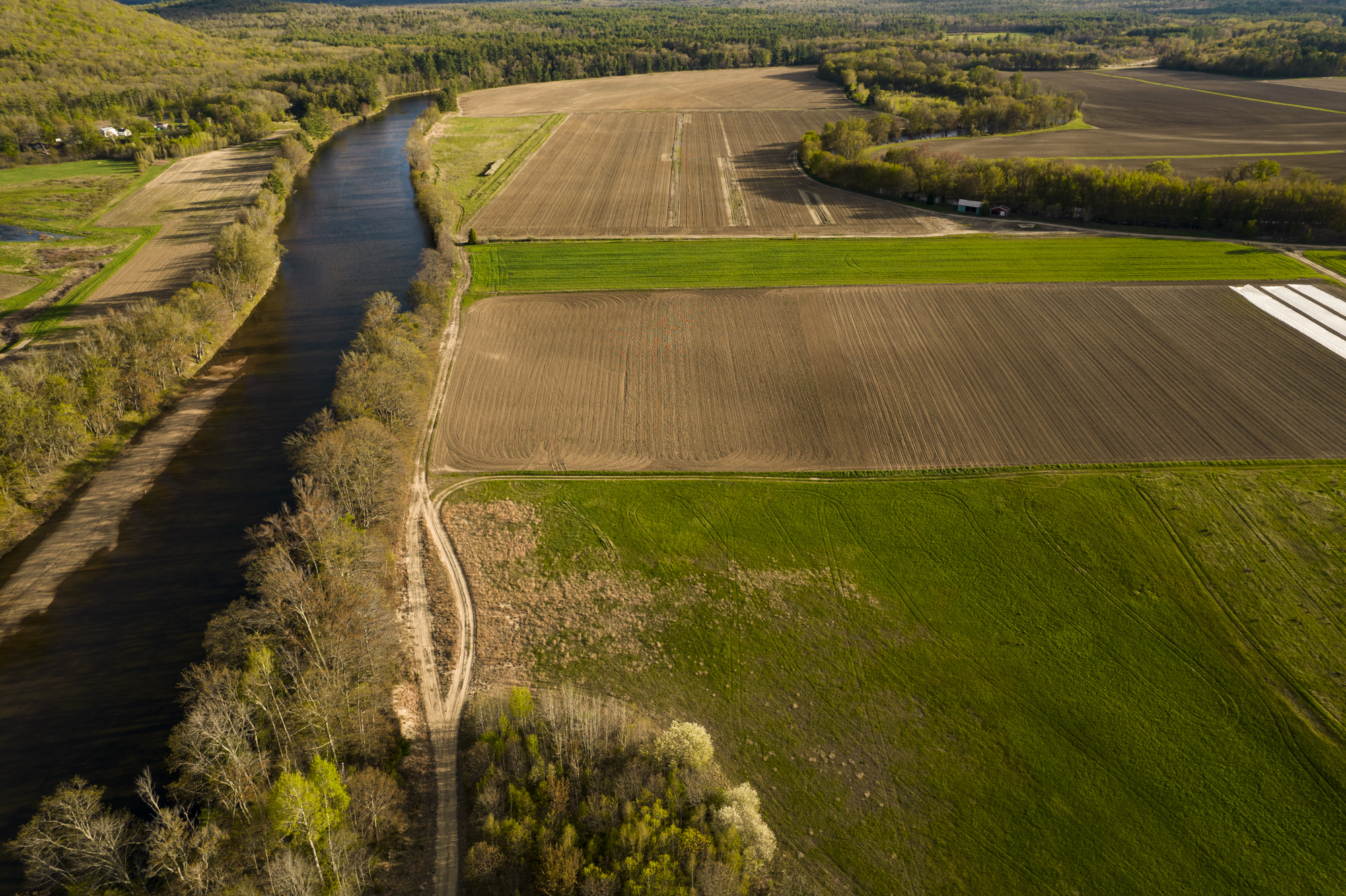 Curiosity may have killed the cat, but it also set in motion every worthwhile adventure. Mike Morin, my partner on this trip, and I both wanted to see what the river was like from here to the ocean. To know what happens to the water between the covered bridges we cross on our daily commutes. What about those long stretches we never see as the river wanders far from the road and out of sight?

On a summer day in June, Mike and I jumped on our boards with a handful of drybags stuffed with food, gear, and cameras planning to take five or so days to reach the ocean. Our first hope was to paddle from farther upstream close to the headwaters at Mt Washington. A couple of years of drought and a dry spring left the river too low to do any kind of paddling upriver. Even with a lower start our first two days (40+ miles) required a lot of dragging and walking our SUPs. In early June here in New Hampshire the rivers should still be running high and cold. I can’t help but wonder if this is the new normal here on the Saco. 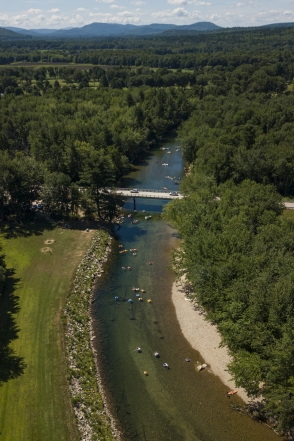 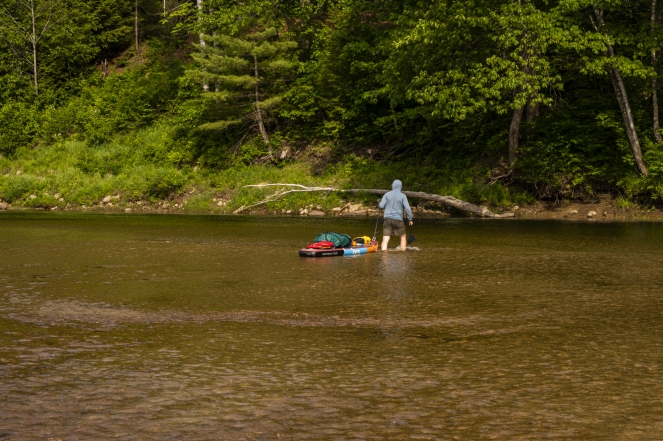 We ended our first day paddling into Maine and with that, our first dam. Dams have been part of the Saco River ecosystem since the late 1800s. They first showed up along the coast and eventually were built at every significant drop on the river all the way up into Crawford Notch, which was erected to create a small roadside pond called Saco Lake. There are a total of 14 dams on the river and 44 in the entire watershed. Our first dam, Swan’s Fall, was a run-down, unkept rusted old dam that looked as if it might generate enough power to light a bare bulb in a closet somewhere.

As any paddler knows with every dam comes a couple of hassles. The backed-up slow water and the portage, sometimes short and smooth, other times a wrestling match with loose rocks, vines, muddy trails, and roadside hikes. Swan’s Falls would most likely be our simplest. We camped a mile or so below the dam at a nearly empty campground. That evening, through the magic of social media, a couple of friends from nearby brought us jugs of water, cold beer, and ice cream. A nice way to finish up a long day. 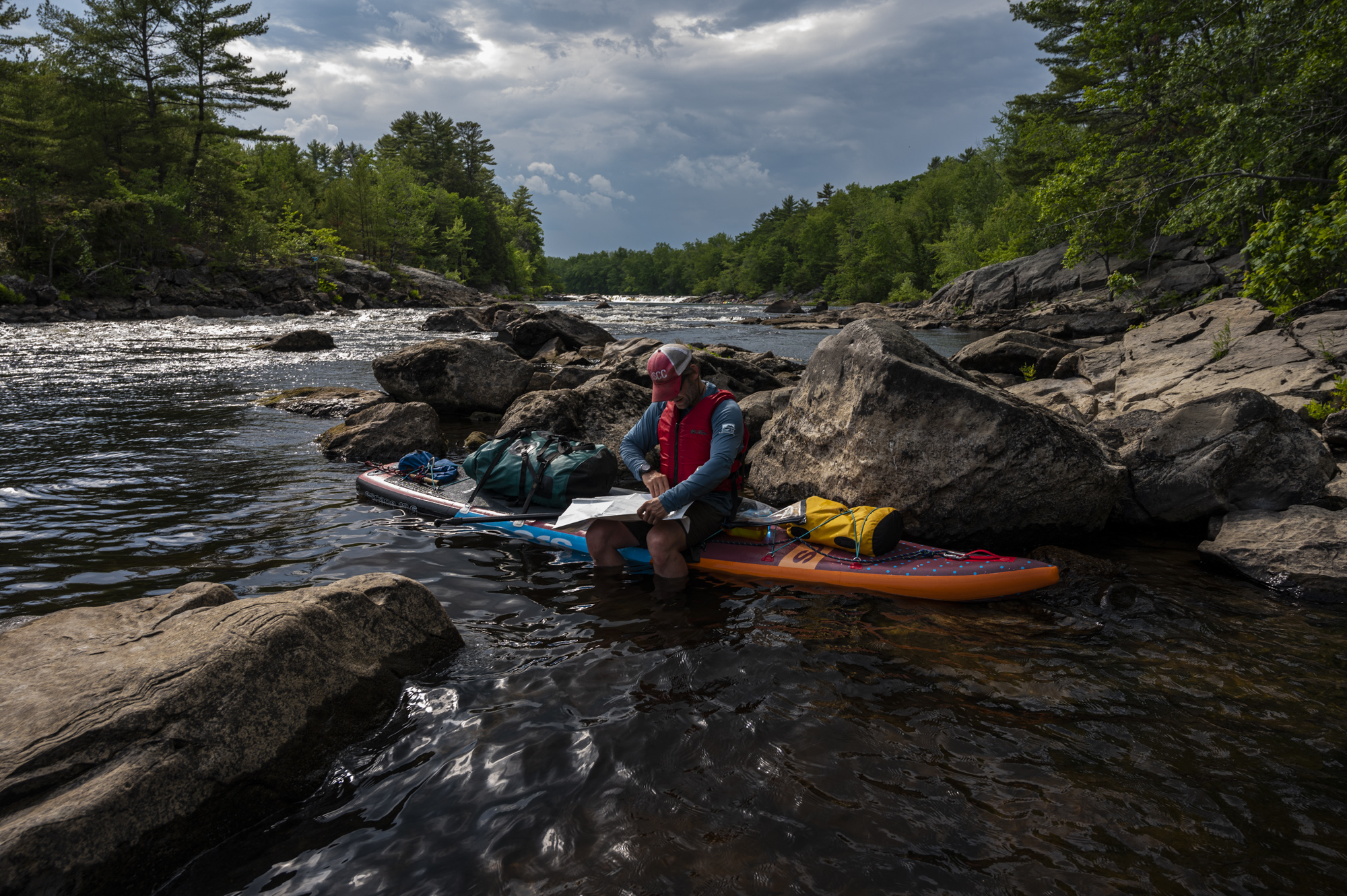 Our path winded through farmlands and flood plains passing under big silver maple canopies. We floated over miles of blonde sand pushed and sculpted into a river bottom that resembled the waves of an ocean. A smooth and gentle current carried us farther from the mountains and closer to the Atlantic, adding volume as we passed streams and brooks.

Along the way, we picked up a friend always game for a day or two of any type of adventure along with a fresh supply of burly sandwiches and a couple of frosty beverages. This self-supported paddle to the ocean felt more like a catered cruise—but we had no complaints. At some point, we would have to start eating the food we’d been hauling. 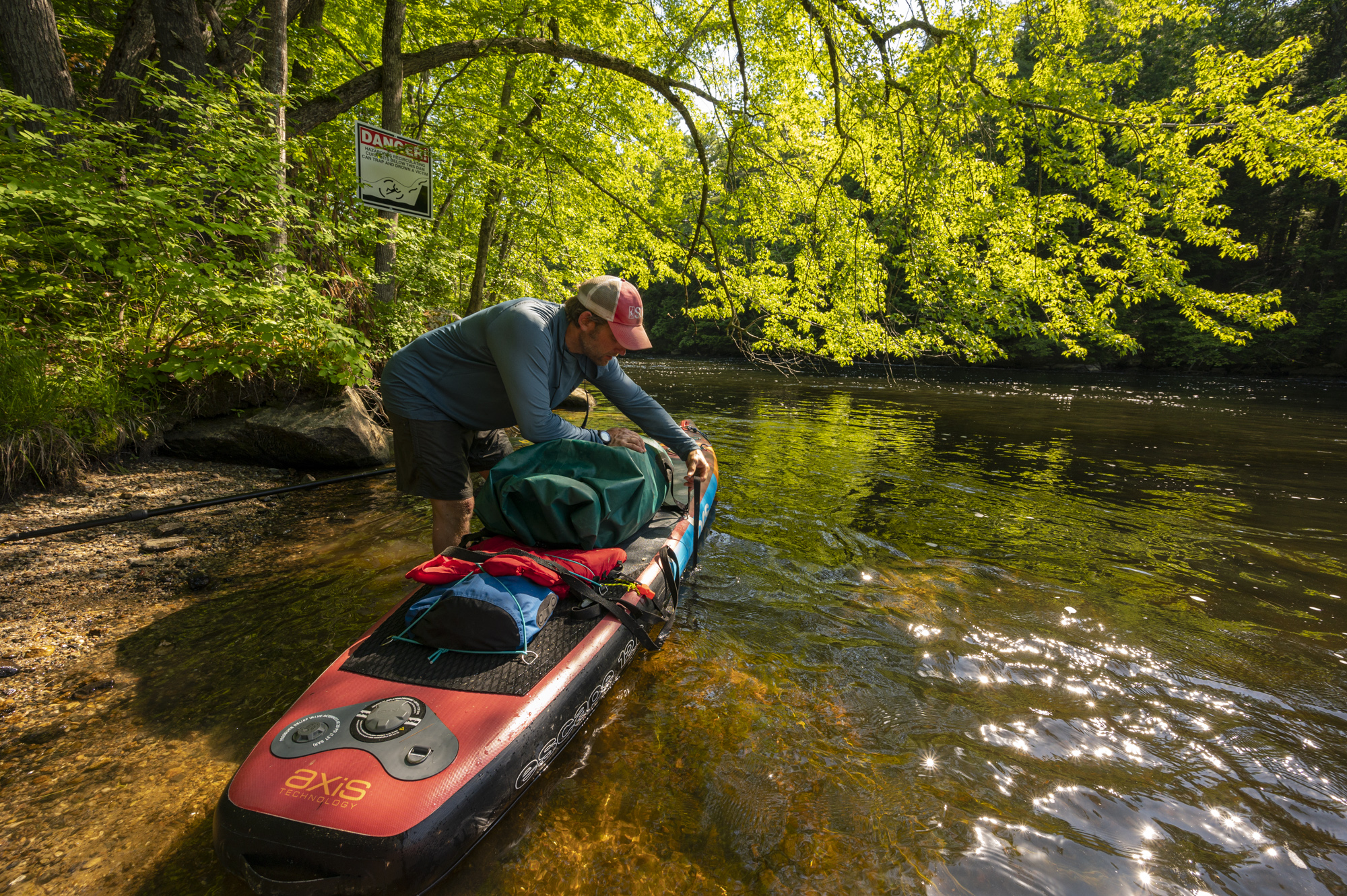 Miles of twists and turns, some short rapids, and a good night’s sleep on a sloping sandy beach got us to our next dam: The Great Falls Dam. Ironically, the falls are not so great anymore, just a large concrete structure that releases rivulets of water over the smooth and curvy bedrock that was once the Great Falls. Another portage, a snack break in the shade and we continued, surprised to have so much wild and undeveloped land along both shorelines. Making good progress we took some extra time to wander up into some channels winding through wetlands and swamps, finding only deer and raccoon tracks.

Thankfully the Saco flows through the largest intact floodplain in New England, spring floods make much of its shoreline impossible to build on or develop. The glacial soils also function as a natural filter for the springs and tributaries that flow into the Saco. It’s by no means a wilderness, much of the acres surrounding the river have been logged decades ago or converted to hay fields and farmlands but for many miles, the shorelines have returned to floodplain forests. 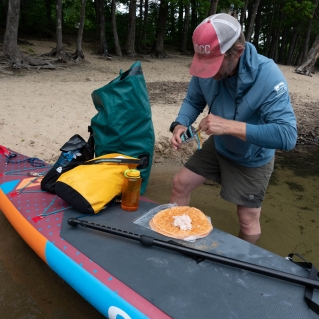 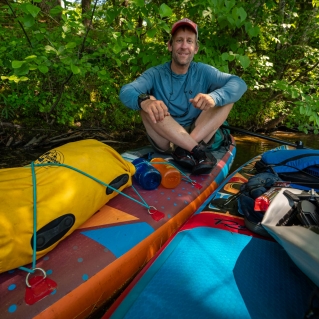 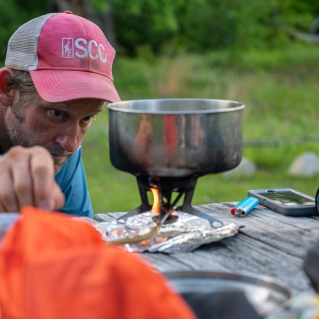 We passed places with names like Pequaket Pond, the Ossipee River, and the river we’re on, the Saco, all named after Indigenous tribes of the Wabanaki nation that used this waterway as a connection between seasons. Spending winters along the coast and warmer months in the mountains, the Saco River was certainly a valuable and important pathway that could be paddled in both directions. Great Falls, Steep Falls, Salmon Falls Limington Rips, all would have been impassable obstacles for anyone in a canoe in either direction. These falls and rapids were once stacked with migrating Atlantic Salmon and other species all of them a vital food source for the Indigenous people. Those migrations were halted soon after the first lumber mills and dams were built.

At the end of day three, we lost our third paddler to the work world, but on the upside his wife brought warm pizza, further delaying our need to cook. We shared pizza and stories while the river crashed its way down the rapids behind us. The sun began to set, and we pitched our tiny camp among the huge white pines. 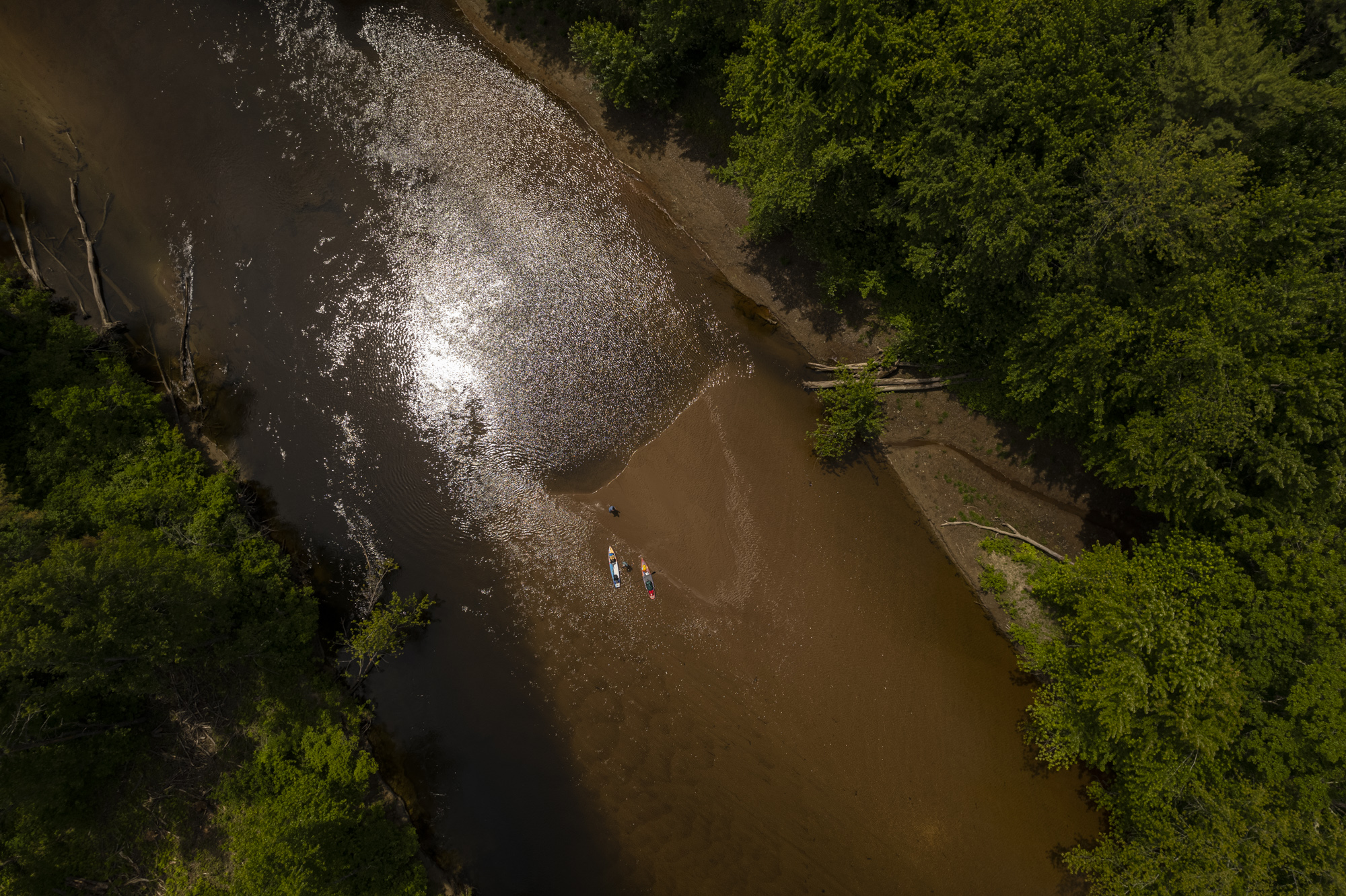 In the morning we pulled water from the river much like the Wabanaki and others did for thousands of years before—minus the high-tech filter. For me, there was something special about sharing a meal, water, and a night of peaceful sleep in a place that connected us to the first people to paddle these waters. Certainly, the river has changed. But through conservation and restoration, some of the damage has begun to be restored. Hopefully, we can continue to keep this pathway flowing from the mountains to the ocean for thousands of years to come.

For the next two days, we paddled mostly flat water backed up behind dam after dam, Bonny Eagle, West Buxton, Bar Mills, and Skelton. With no more rapids, quick water, or easy-going current, the long days felt more like a day on a reservoir than a river. Motivational reinforcements joined to distract us from the flatwater slog with lively conversation. When we reached the final campsite of the trip, we rewarded ourselves with dinner in town. 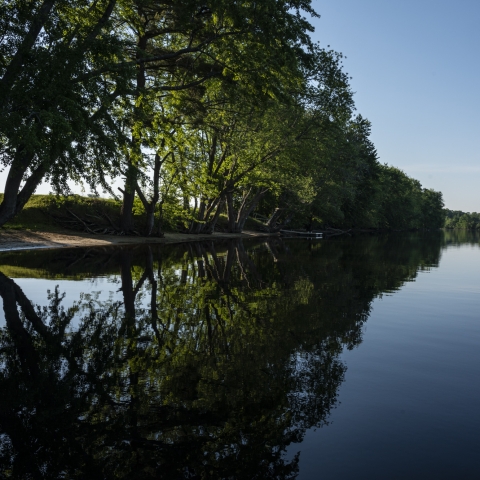 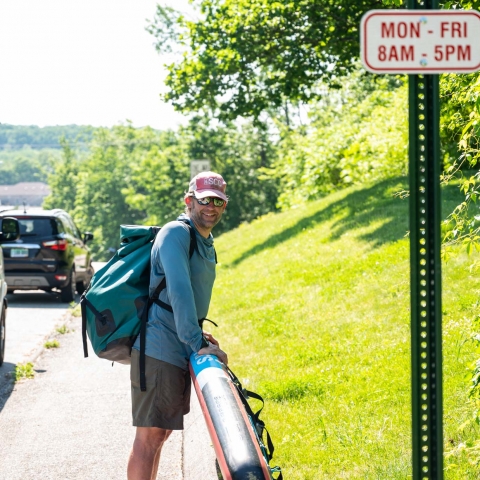 Our last day was dictated by the outgoing tide. We leisurely packed our camp and paddled the last few miles under bridges, by graffiti and the signs of the urban world creeping into the river. Above Biddeford and Saco, Maine we took our boards out for one last portage, a 1.1-mile hike through the city, complete with crosswalks, sidewalks, and honking cars. A rude awakening for sure but we knew this would be our greeting as we made our way to the boat launch and the salt water.

To be fair, Biddeford and Saco are embracing the river now, building decks and restaurants to overlook the river even though it’s bound by bricks and concrete. They are starting to appreciate the river, breaking from the decades of dumping everything into it, constraining it, and largely ignoring its beauty. 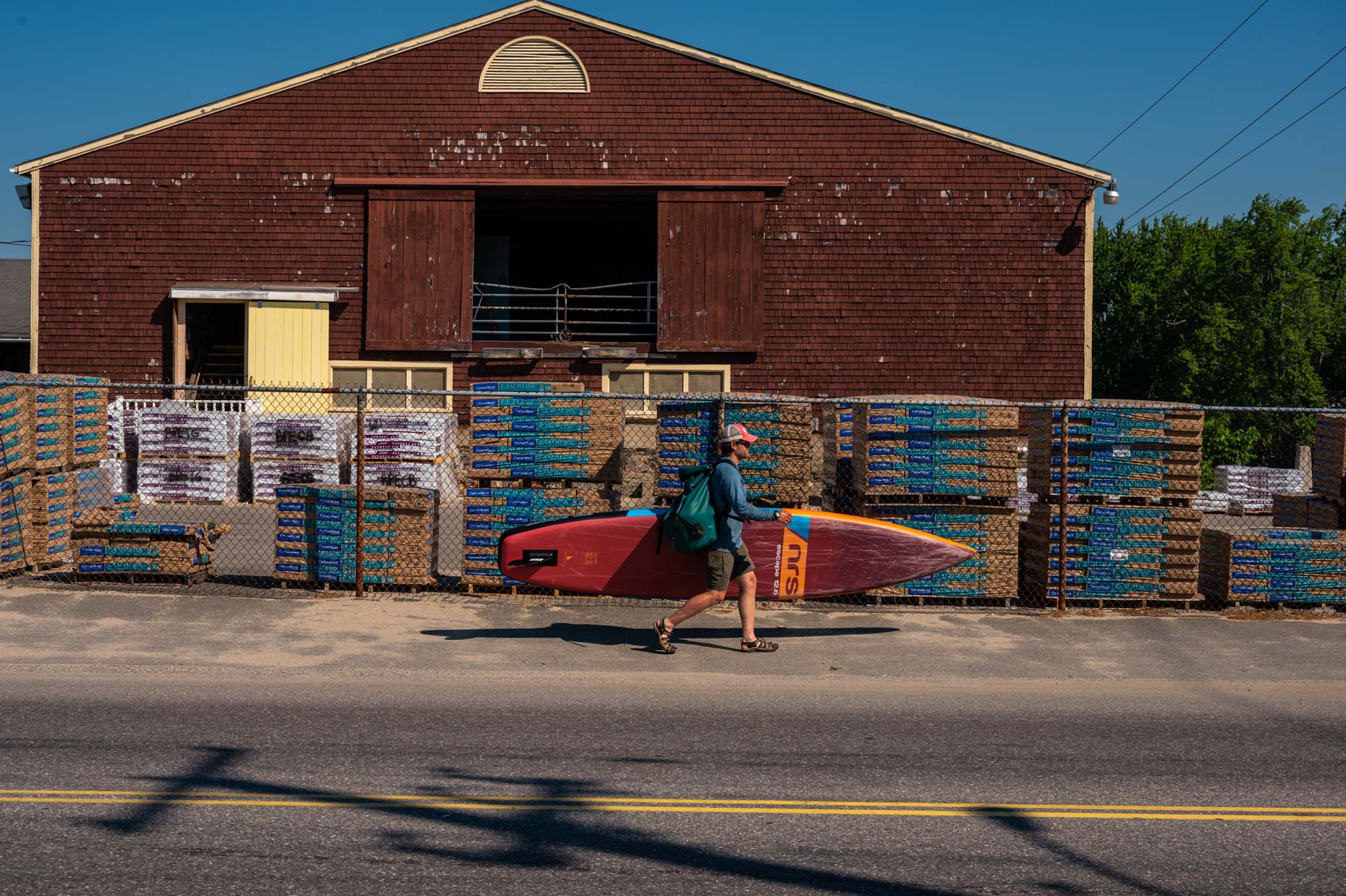 From below the Cataract dams, we rode the outgoing tide and a fair tailwind to the town of Camp Ellis, passing by old cut granite piers, swaths of marsh grass, winding and turning the last couple of miles to the ocean, just as it meandered those first few miles back at home.

Editor’s Note: Guest contributor Joe Klementovich migrated North to the White Mountains of New Hampshire to pursue rock and ice climbing after graduating with an engineering degree. Traveling on various climbing adventures with a small point-and-shoot camera challenged Joe to create better and better photography to tell the stories of each outing. It was during an 11-hour ascent of the Regular Route on Half Dome in Yosemite Valley that photography would overtake his interest in engineering.