Falling for the Freestone Drifter

Let’s just say what everyone is thinking: an inflatable drift boat just looks weird. I mean, what is that boat anyway? A mutilated SUP board? A boxy raft? The strange redheaded-stepchild of a fiberglass drift boat?

I’ll explain it this way: if the Freestone Drifter is a fisherman, it’s that guy who shows up to the boat ramp in a Carharrt jacket and ditch boots. He isn’t flashing you a Headhunters trucker hat and only has one (ONE!) fly rod. The rest of the fishermen roll their eyes and go back to stringing their four Sage rods and clipping into their fancy waders. Behind the boat ramp, the Freestone-Drifter-ditch-boot man rips a twenty-inch brown out of the eddy on his thirteen-year-old Le Croix his dad gave him. The Freestone Drifter sure as hell isn’t a dory, a driftboat, or even a raft. It’s a big gray gaper-mobile. But, in certain situations, the Freestone out performs all three of its traditional stepsiblings. 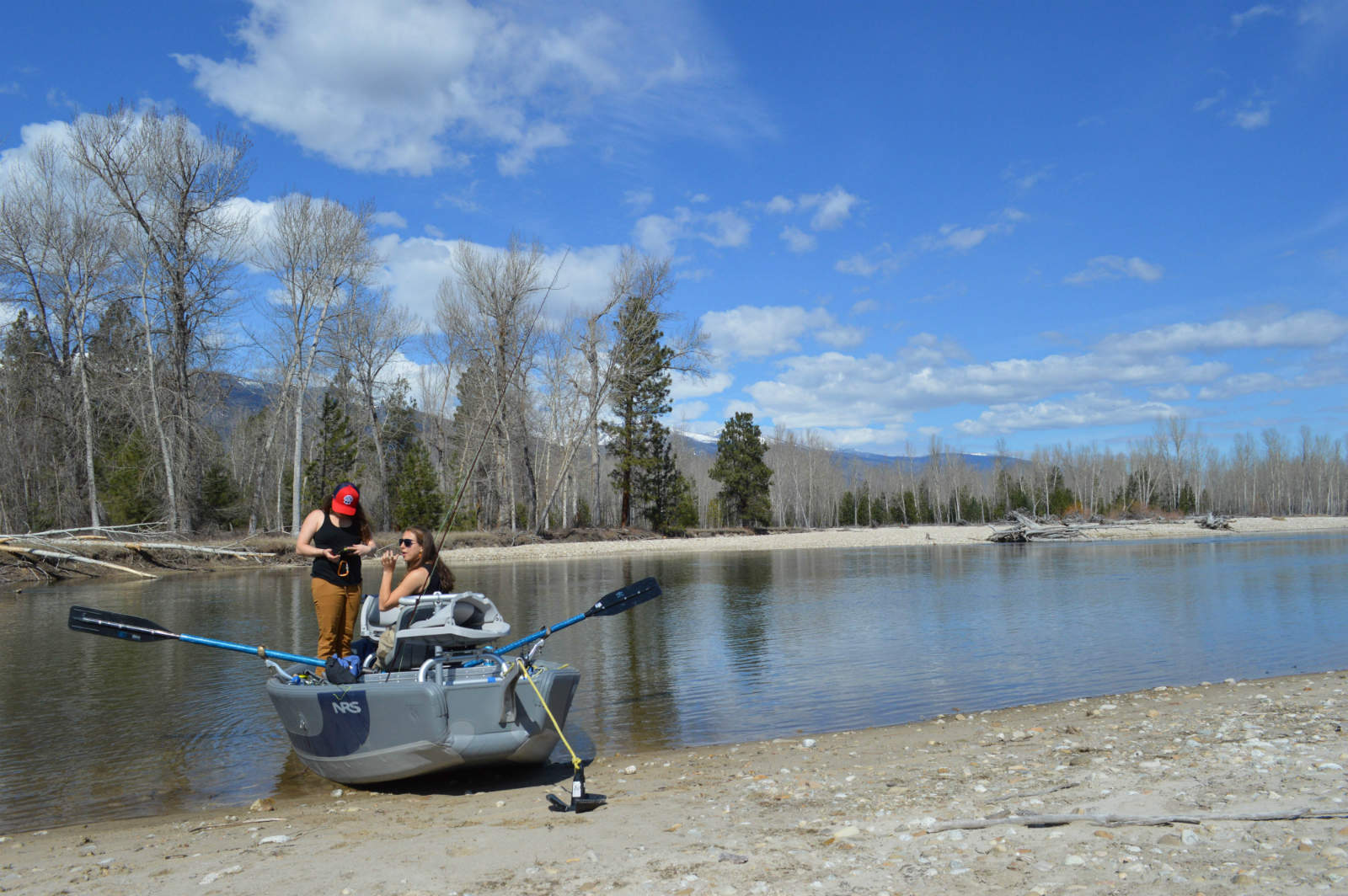 The Freestone didn’t catch me 94.7%* more fish like I’d hoped, so I’m pretty sure the trout magnet is broken. It did, however, catch me 87.9%* more young, single, bearded men inquiring on what I was towing behind my rig. I’m sure it was just the boat they were interested in. The Freestone comes in at a few thousand dollars more than a Craigslist raft but if you’re a woman, you’ll likely recoup your costs in free beers from aforementioned bearded fishermen at the bar.

I fished the Freestone on the Blackfoot, Bitterroot and Clark Fork Rivers in Montana. Similar to a hard drift boat, the Freestone was easy to stop in the current to pester the hell out of that foam-pile rising trout. Back rowing through boulder gardens—no problem. The internal frame and fishing bars helped catch more than one enthusiastic caster before they launched themselves out of the boat.

The anchor worked like, I don’t know, a heavy thing behind a boat. Coming from a whitewater background, the idea of dragging some piece of steel down a riverbed still sort of freaks me out. The pulley system was simple enough for me to decipher. The lower external profile made it easy to row the Freestone through the wind. HA! Just kidding, no inflatable boat will ever be easy to row in the wind. But it didn’t totally suck. 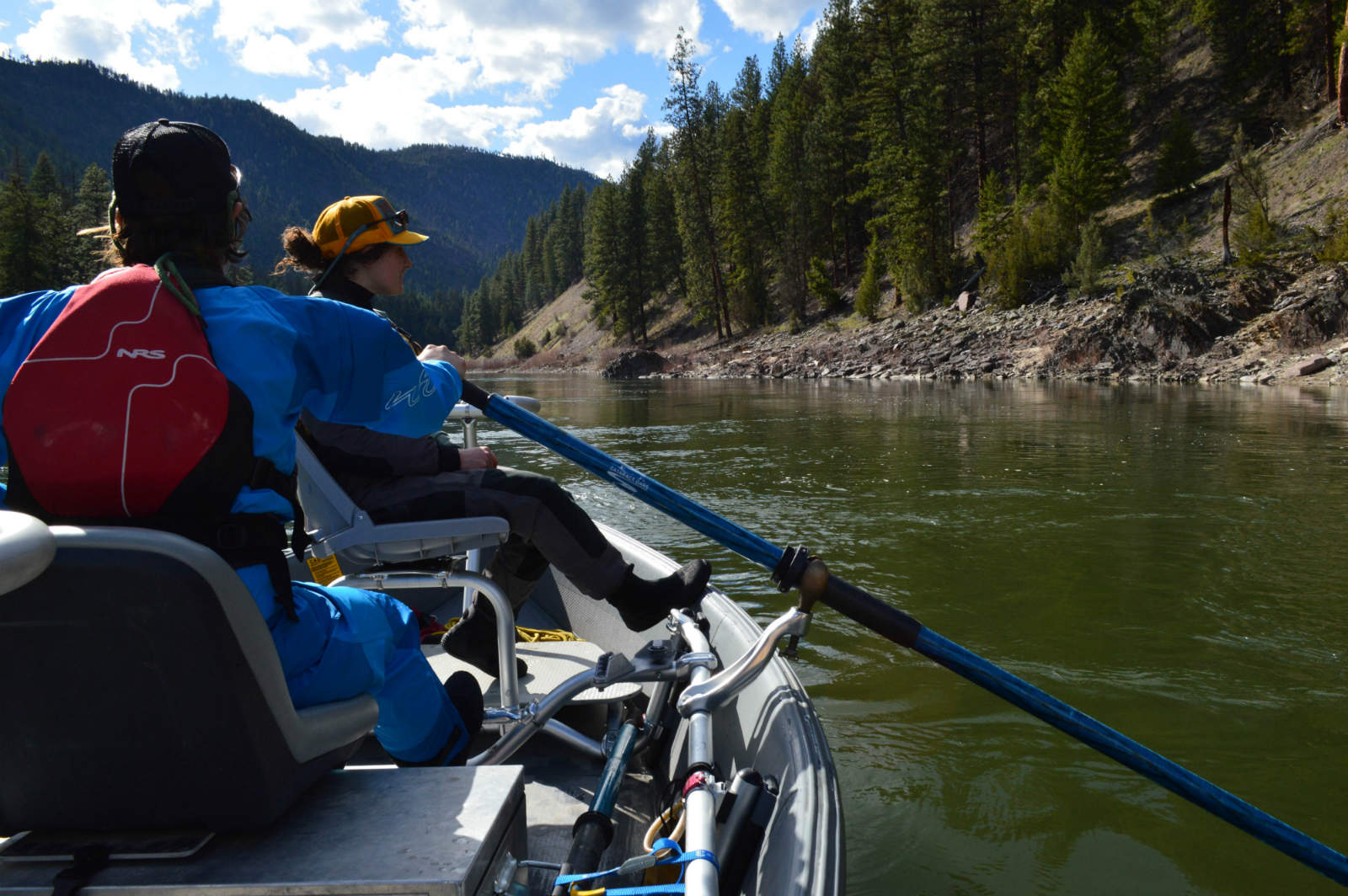 The main advantage of the Freestone Drifter on day fishing trips is you can ram it into rocks with gleeful abandon. So when you decide to take the “adventure line” down the left corner of the Blackfoot River because you’re trying to impress a bearded fisherman and completely botch it? No worries. When you decide you definitely need to take a side channel/irrigation ditch route so you can pull up to Imagination Brewery and buy an IPA and some popcorn? No stress. It’s also much easier to bash the Freestone Drifter into rocks when you’re just demoing it for NRS and it isn’t actually your boat. Product testing, guys, product testing.

After determining the Freestone was a highly adequate day fishing craft it was time to give it the whitewater test and see if those drain holes were good for anything other than chilling beer cans. 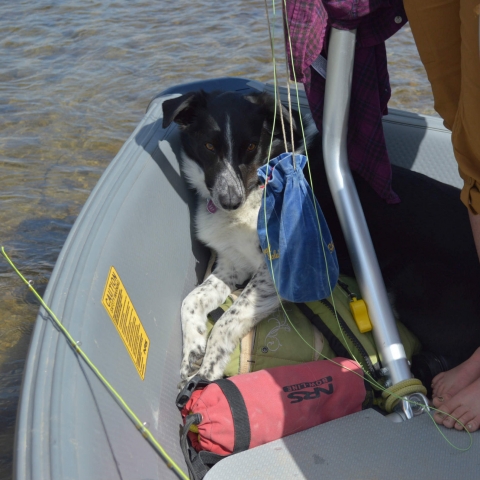 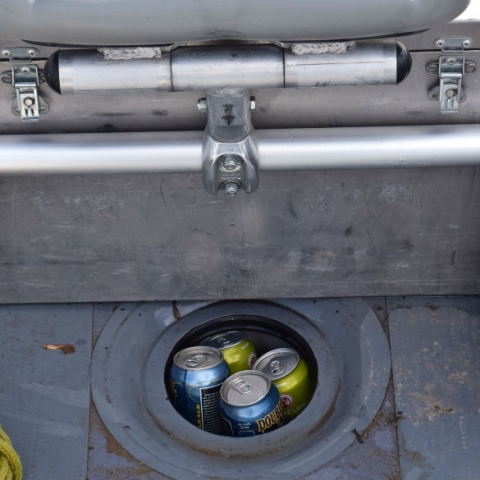 I bought off safety from a kayaker (FYI: the going rate equals three post-trip beers for one flip assist) and we put in on the Class III section of the Clark Fork in the Alberton Gorge. The Freestone performed well in smaller wave trains, eddy lines and pulling off cliff walls. Poking it into some bigger hydraulics, however, was more of an adventure. The Freestone doesn’t have the stability of a raft; it also doesn’t have the wave slice of a dory (or the covered deck). I pushed into the wave at Tumbleweed Rapid, my world went gray rubber for a moment (never a good sign in whitewater), then the Freestone slapped back down into the eddy line behind the wave train.

The drain holes might work well for a little splashy spray or when your friend pisses himself in big trout excitement. A couple hundred gallons of river water, however, were not draining quickly and I had a brief moment of can-you-f’ing-sink-an-inflatable-driftboat panic before a friend tossed me a bail bucket. I’m not saying you shouldn’t take the Freestone into any whitewater situations—just you’ll likely want a bilge pump and some bail buckets along.

Because I’m a [cue sniveling voice and upturned nose here] dory boatman, the Freestone didn’t really stand any sort of chance at getting a decent whitewater review. There are worse crafts to attempt whitewater in, like a Creature Craft, blow up alligator, inflatable kayak or any boat with oar rights. On a scale from Oh Shit to Yeehaw, the Freestone Drifter gets a solid “Meh” in Class III river performance. 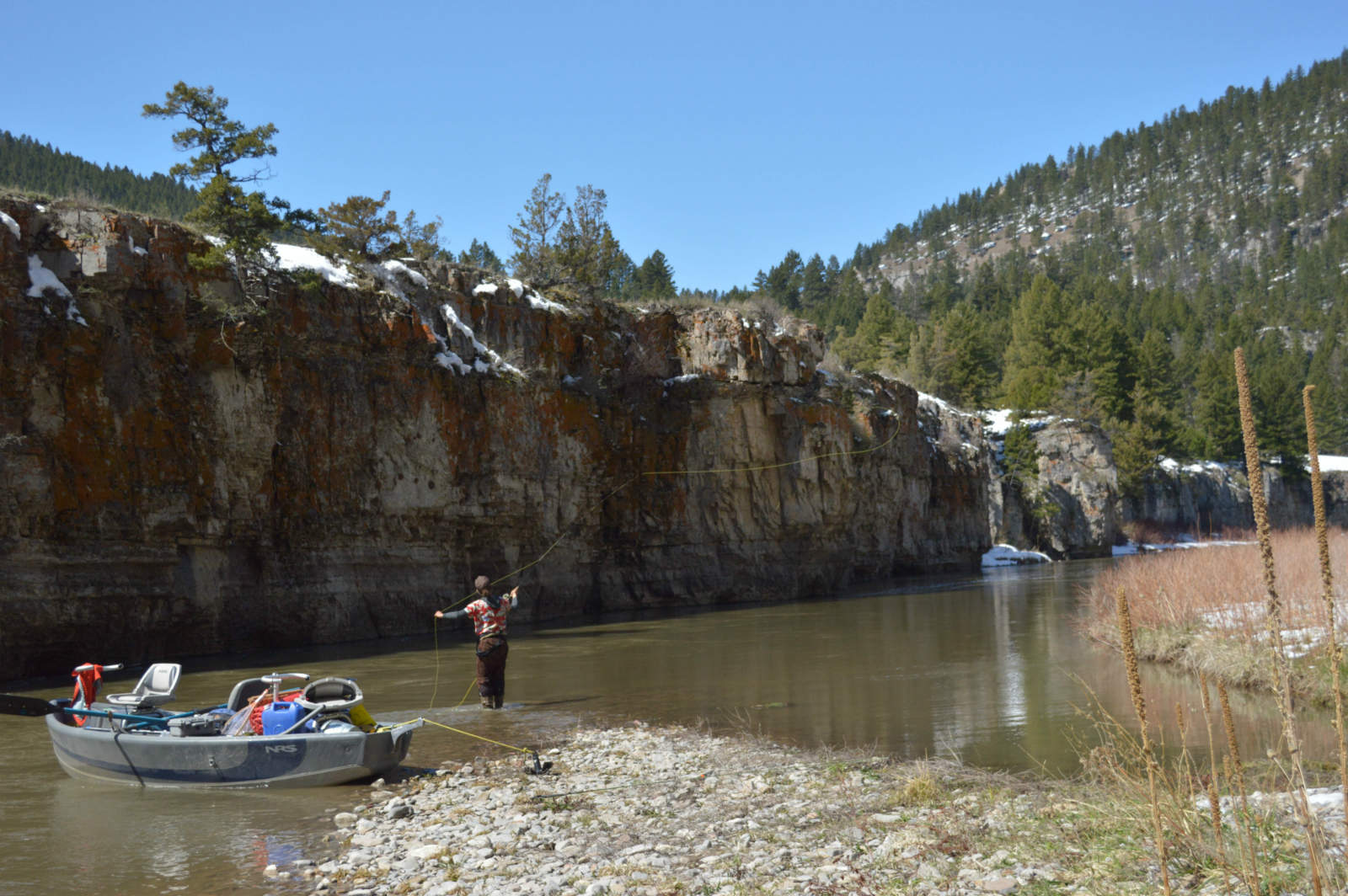 The main selling point of the inflatable driftboat is it can be deflated and the frame breaks into approximately 1,465 pieces—making it perfect for fly-in or pack-in river adventures, or for testing the IQ of a gifted and talented fifth-grade student. I didn’t have time for either a fly-in adventure or the paperwork associated with hanging out with a fifth grader, so I took the Freestone Drifter on a five-day Smith River trip instead. We just brought it there on a trailer rather than breaking it down because I’m not as engineering-inclined as a gifted and talented fifth grader either.

Weighting the boat down with five days worth of gear n’ beer, we shoved off the boat ramp into the blizzard. With 25% visibility I could barely see my toes, let alone five feet in front of the boat. Despite being suffocated by horizontally blowing snow, I noticed a strange bubbling through the haze. Note: if you load down the Freestone to where the drain holes are below water line, it will fill up with water. After another, “Can you f‘ing sink an inflatable drift boat?” thought, I found the screw in drain lids. Titanic situation averted.

The Freestone handled the weight of propane tanks, cast iron, beer supply and unrealistic fishing expectations superbly. I was still able to maneuver the boat into good water and through the shallow “boogy water” of a 300 CFS river. Again, the Freestone’s real shining feature is providing the maneuverability of a drift boat with the ability to ram it into rocks, which I did a bunch of times. I would like to blame that on the turbid or technical water, but more likely the rock encounters were because my boat mate and I would get to gossiping about men or trout and I would stop paying attention behind the oars. The Freestone was so fun to row compared to the other loaded down rafts and canoes that I was able to convince my friends to row while I fished—the sign of a truly useful fishing craft. 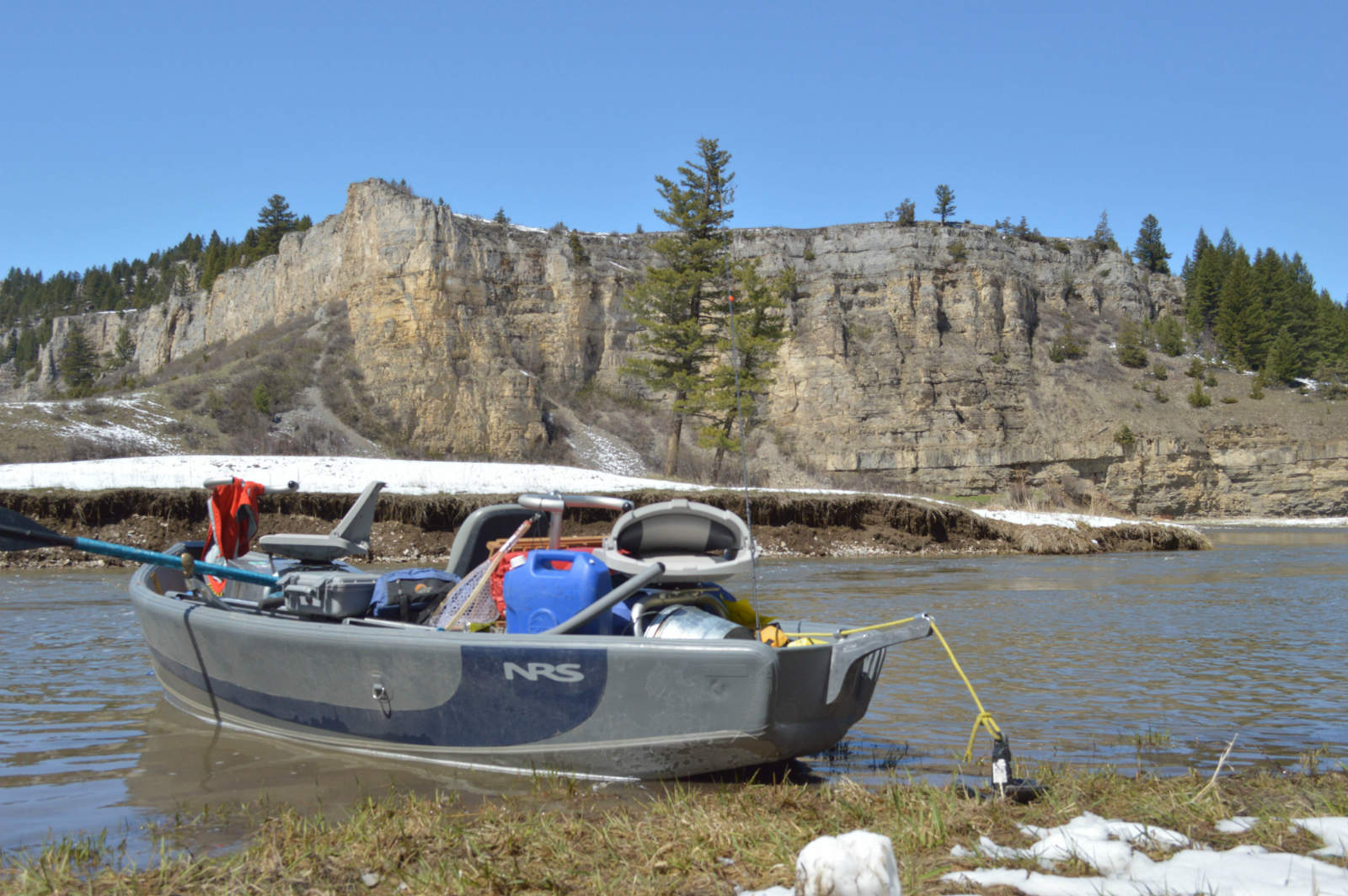 Just like it’s hard to admit you’re falling for the ditch boot guy at the put in, it was also hard for me to admit I was falling for the Freestone Drifter. But the big gray gaper-mobile stole my heart—not just for its quirkiness but also for its purely utilitarian “get some fishing done” uses. The Freestone likely won’t be my first boat. But it’d be a great addition to a quiver, if you’re one of those rich folks with lots of boats. Hey rich folks with lots of boats—did you know that boats need to be exercised and trained just like horses? I’m available for hire… 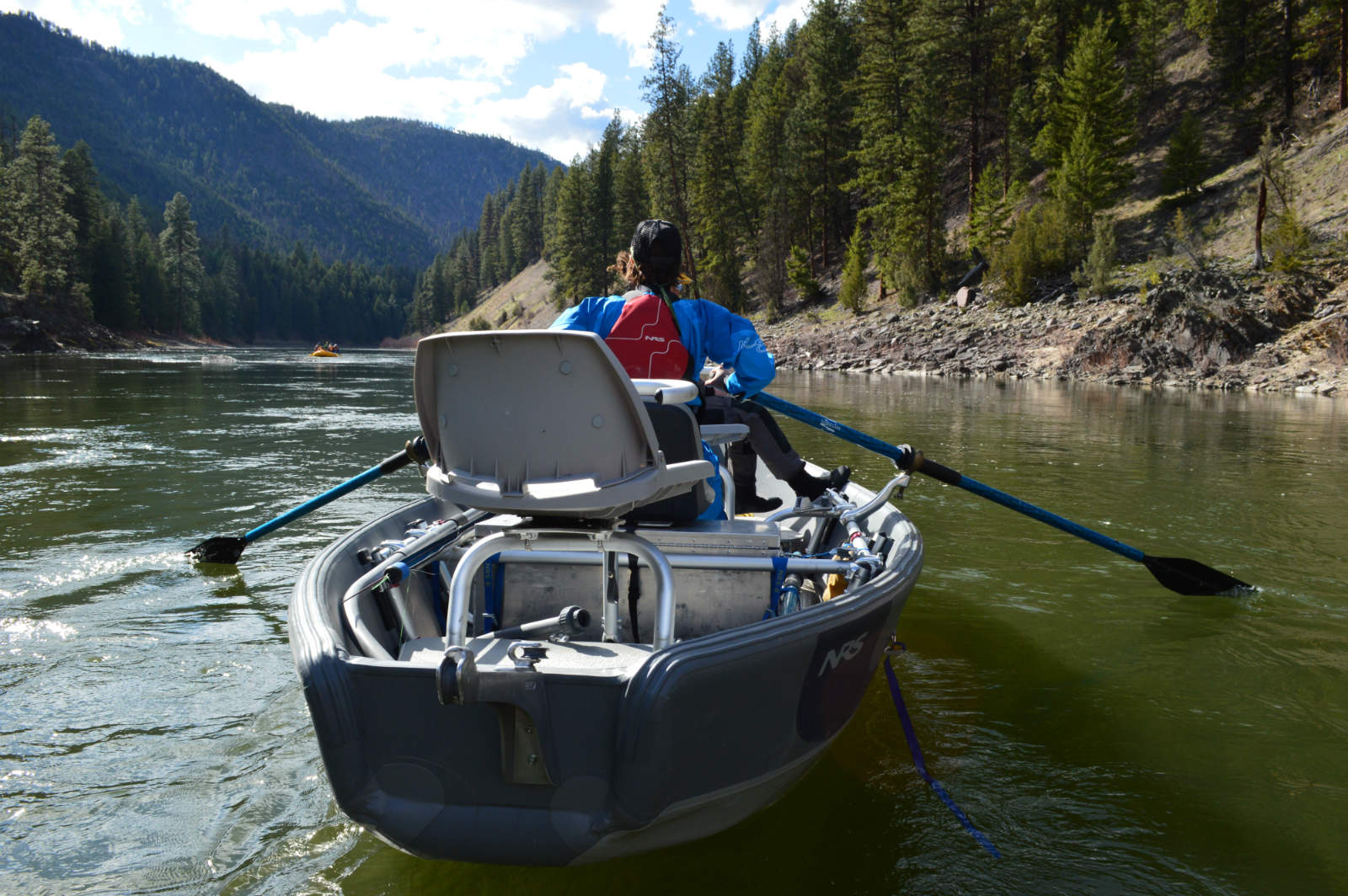 * Author’s note: All percentages are fabricated in a similar way that flyfisherman completely fabricate the size of the trout they catch.