In this day and age of the nuclear family scattering all over the nation, if not the globe, it is rare to get in an extended river trip with one of your children.

My youngest son Erik and I have been planning an extended adventure for over a year now. Work and other obligations forced us to trim our plans, so we decided to recreate in our own back yard – Hells Canyon. The more we thought about it, the more it made sense – less time on the road, more time on the river. 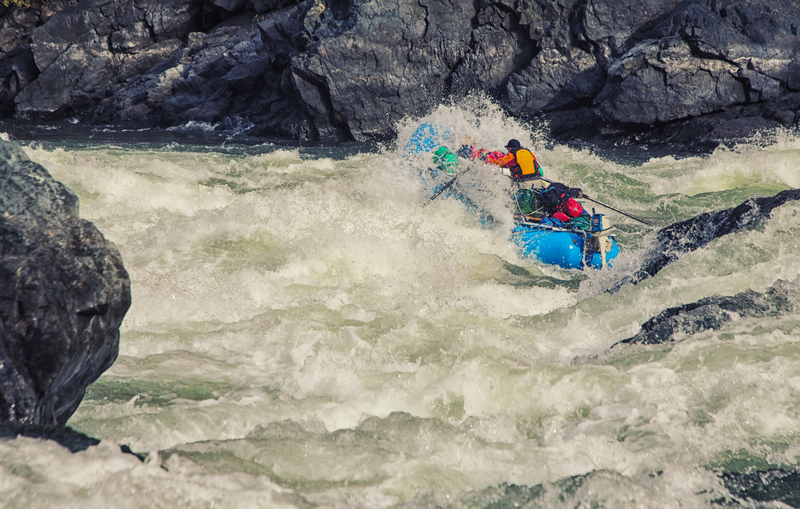 Passing through Cambridge, Idaho, we stopped for a short visit with my old friend Jerry Hughes, co-founder and co-owner of Hughes River Expeditions. Jerry took me on my first ever river trip in September of 1974, a Jeep retrieval operation on the Main Salmon. I’ve been in love with river running ever since. Thanks, Jerry.

Running rivers with my wife and three sons has been a family affair ever since the kids were old enough. All three sons have been whitewater guides, and Erik actually makes his living on rivers and with his photography. The credit (or the blame!) goes in part to Jerry Hughes, who Erik first met at age 10, on Erik’s own first Hells Canyon trip.

Neither of us had ever floated below Pittsburg Landing, and we were anxious to see the stretch from there to the mouth of the Salmon River.

We set up a quick camp at dark at Big Bar, on Oxbow Reservoir.  It was cold, and I started to set up my back pack tent. Almost before I could break it out of the bag, Erik already had a big NRS tarp set up, using the raft’s oarlock as the high point, and using baggage to nail down the corners with the tie downs. A simple ground cloth and a couple of pads later, and we had a cozy, quick shelter.

We set up the tarp in different ways for five more evenings, and my backpack tent never had to come out of the bag, even during a driving rain on day four, when we cooked under the tarp, read a lot, solved a lot of the world’s problems, and probably got more sleep than is healthy. 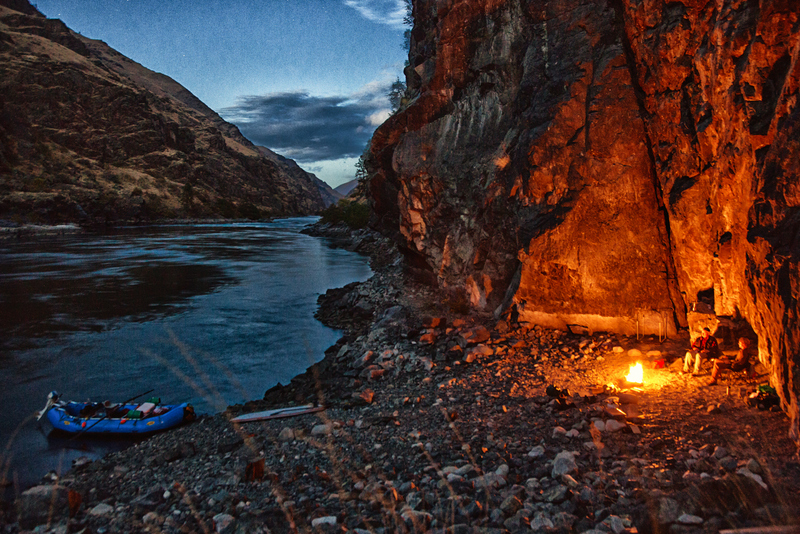 Our first day was a short one, and we camped at Lower Granite Creek, setting our kitchen next to the cliff face at the top of the landing. Wild Sheep was a blast, especially seeing the looks on the jet-boaters’ faces when they saw Erik running the rapids with his stand up paddleboard, which is something you don’t see every day. 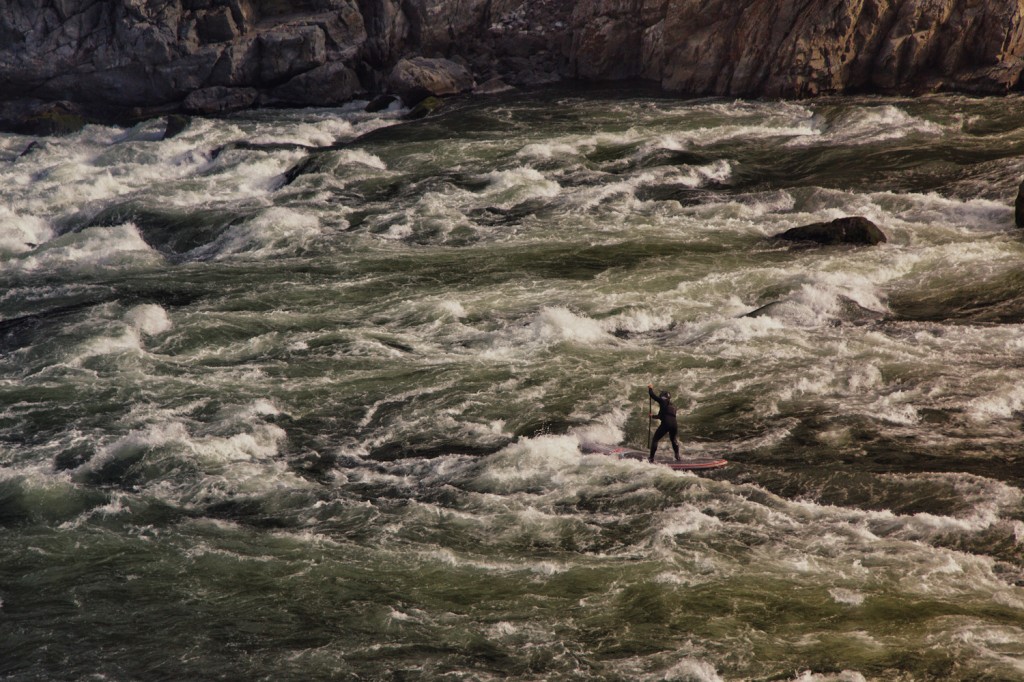 We ran Granite and other rapids without incident, and with Erik “SUP”ing all the big ones all the way to Kirkwood Ranch, where we camped with the mule deer, chukars, and turkeys. 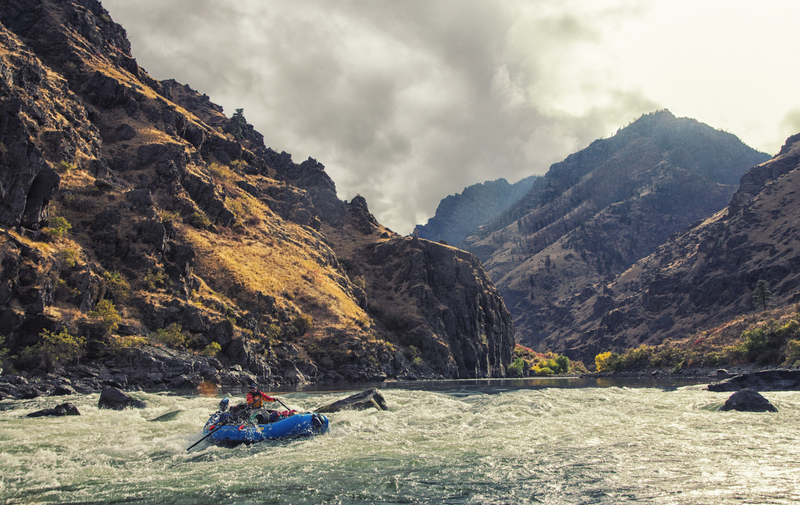 The next morning was cold and windy. “Get the motor runnin’, head out on the highway…“  We decided that we were born to be wild, so to speak, and we’d better try out my ancient Honda 7.5 longshaft four-stroke. Erik and I both love to row, but when you’re fighting slow, swirling currents and the dreaded upstream “W”, why not use the motor? It started fine and ran smooth, attached to the NRS Raft Motor Mount.

Mid-afternoon had us arriving at a small beach camp about ten miles above the mouth of the Salmon. Once again, Erik pitched a fine tarp, which turned out to be critical the next day. My steelheading and sturgeon fishing was unproductive, but fun. The closest I got to a steelhead was a smallmouth bass, but it was nice to get back into my fishing zen mode. 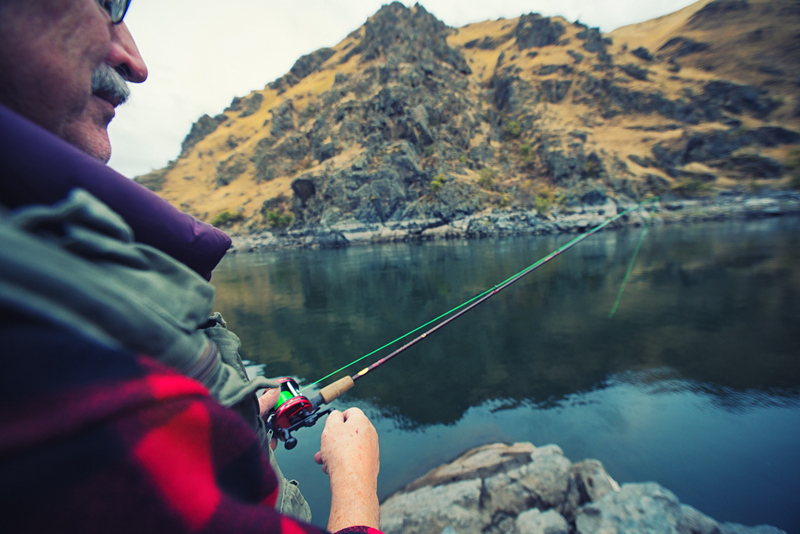 After a fine evening meal and some great conversation, we spent another very comfortable night “tarping it”. We woke the next morning to a cold, driving rain, and I thanked Erik again for the fine shelter.  We were able to cook a huge brunch under the tarp, and spend most of the day eating and reading and conversing and napping.  The rain simply wouldn’t let up, but at least it wasn’t the snow that we could see just a little higher up on the canyon wall!

Finally, at about 4:00, the sun came out and the wind and rain stopped.  We raced to break camp and load the boat to head down the river.  Again, the motor setup came in quite handy, both above and below the Salmon mouth.

By early evening that day, we were setting up a riverside kitchen and another tarp at Geneva Bar, on the Oregon side (a fine camp, by the way). We were puzzled by a thunderous sound of what we thought was a falling rock on the Idaho side, followed by what sounded like a small slide. We attributed it to the heavy rain, and got a little worried about the rocks above our own camp.

That same sound returned first thing in the morning, but without any follow up “slide” sounds.  Then,“bock!”, again and again, sometimes less than a minute apart, all from the Idaho side. We realized the sound was coming from bighorn rams, fighting, and soon spotted the two of them in the early morning light.

They were just across the river, warily circling each other on a rocky bluff, out of Erik’s camera range. Needless to say, I ferried Erik across the river and watched him scramble to the top of the bluff, where one of the rams apparently heard something, and saw my son before my son saw him. The chance for a fight scene photo went away, but he got a stunning shot of the two rams sauntering off. 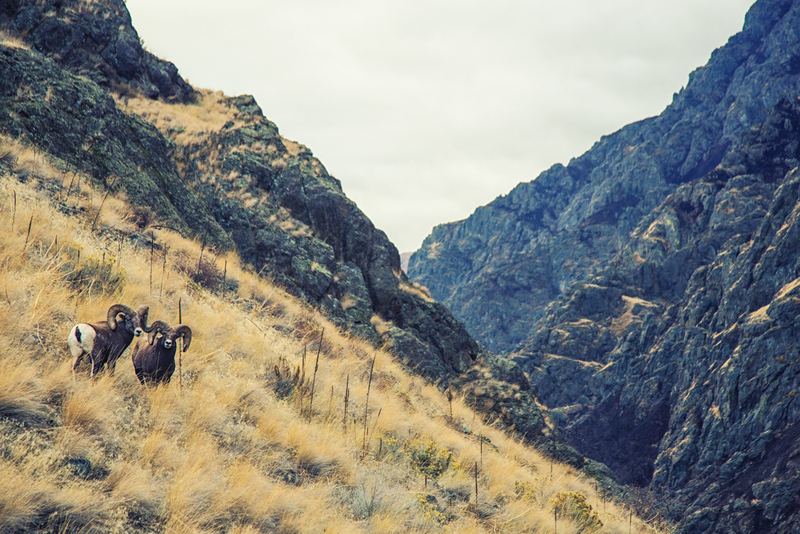 Half an hour later, after we returned to breakfast, the ritual mating fight continued on another outcrop a little higher up the canyon wall. Erik and I enjoyed the fight as well as our dwindling food supply.

With less than 20 miles to go to Heller Bar, I got a little wistful. Even though the weather had been variable, from fair to foul, and we were almost out of food, I just didn’t want the trip to end. This was our first extended river trip in years. Erik’s been gone a lot during peak floating seasons, running rivers that are far above my pay grade. Maybe it’s just me, but it is only on adventures such as this that I can truly relax and appreciate my blessings, and Erik is certainly one of them, along with the rest of my family and friend. That said, a cold wind was blowing, and we both knew it was time to go.

Hank Boomer is a retired judge from McCall, Idaho. 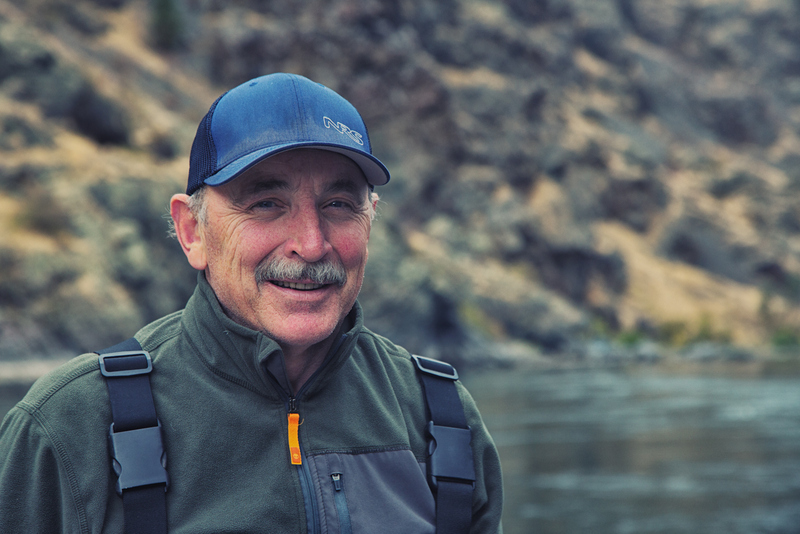