Transition Seasons: What to Do When the Runoff Stops

Transition seasons can be hard for paddlers looking to stay active. Idaho kayaker and Team NRS member Erin Clancey talks about how she copes. 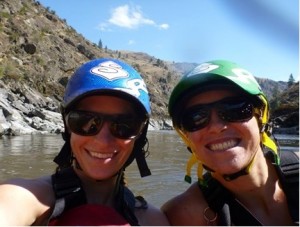 Transitioning between seasonal activities is tough, especially when the weather or water doesn’t cooperate. Unlike the East Coast, where dam releases start in the fall, out West, our rivers dry up. By early fall here in Idaho, there’s often not enough water to go paddling, but it’s still hot. In early winter, either there’s still not enough water or it’s too cold to paddle— there’s not enough snow to go skiing, but there’s too much snow to go mountain biking. I always end up end up getting bored and go stir crazy during these transition times. 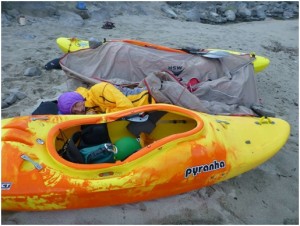 However, if you want to paddle, there are always options. You just have to get creative. This September, a friend and I did a self support trip on the Lower Salmon River. It was low water, so to make the trip more challenging we did the run in two and a half days, paddling over 30 miles each day. The Lower Salmon has a lot of flatwater, and a long paddle out on the slow-moving Snake, so making miles presented a new challenge. We also made it more of an adventure by packing as light as possible. We didn’t bring a tent, sleeping pads, or extra fuel. The first night there was a big thunderstorm, so we just slept on the beach in our paddling gear to keep our sleeping bags dry. We got to sleep in our sleeping bags on our second night, but ran out of fuel on our last morning. Overall, it was a great little backdoor adventure on a free-flowing river through beautiful canyons where water runs all year long, giving paddlers an option when there’s nothing else running. 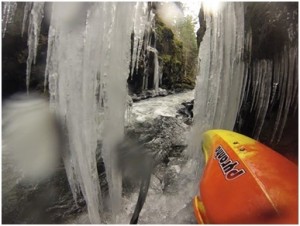 Going boating in the cold early winter season takes some extra motivation. If you like playboating and live in eastern Washington or northern Idaho, the waves start to come back in on the Spokane River in November/December. It’s cold, but not that bad in full winter dry gear.

I just got back from a trip to White Salmon, WA and that’s a great place to go creeking in early winter. It usually starts raining, so many of the creeks come in, and if it doesn’t rain, there’s always the White Salmon (Farmlands, Green Truss, and BZ to Husum sections). Also, the aquifers do not run during the fall, so there’s actually more water in the Farmlands than during the summer. It’s generally not that cold during the early winter, but it was cold when I was there and the canyons were full of ice!! 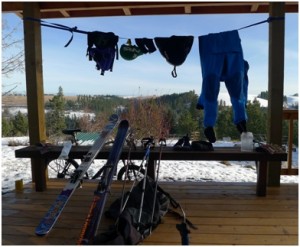 I’m excited for ski season, but I’m going to make the most of my time by paddling until the snow really gets here! I guess my porch is just going to be covered in random gear until the end of the transition season!!