Something in the Water: Living and Paddling with Waterborne Bacteria

Waterborne bacteria aren’t the most obvious dangers for boaters, but as Kyle Smith has witnessed first hand, they still warrant taking precautions. He shows us the science and how to mitigate the threat.

As kayakers, rafters, unintentional swimmers, and all-around river dirt bags, we spend a lot of time in and around water. Often times, we take for granted the pristine state of our backyard runs—unless, like me, you grew up in the agricultural Mecca of Southern Idaho, where men are men and dairy cows are scared. But boaters and cow foam are not always the only inhabitants of our favorite watersheds. Often, bacteria can come to play as well, and sometimes they come home with us.

As a frequent recreational user of Idaho’s rivers, I witnessed a horrific viral outbreak this past summer of what the CDC (Center for Disease Control) diagnosed as Norwalk virus. It tore through group after group of whitewater enthusiasts, commercial and private crews alike. I was however, fortunate enough not to contract the virus amongst, what seemed at the time, the beginning of the zombie apocalypse. You would be surprised how undead 30 people look when dysentery is unleashed upon each one.

Norwalk is a well known waterborne illness that can be contracted through contact with infected water, others carrying the bacteria, infected surfaces, and shared clinky-drink cocktails. It can stay in the body undetected for up to two weeks. Sneaky. With one fell swoop of the highly esteemed 7-eleven mega-gulp cocktail mug, an entire crew of fun lovers can be taken down!

Near the end of last season, I walked into a gaggle of forest rangers consoling one another as they recalled war stories of campsites left over from infected groups throughout the summer. Walking away, cringing, I got to thinking, If this virus could live in our own watersheds and decimate entire river trips within days, what other debilitating viruses or bacteria live in or around rivers and creeks? There are a number of them, it turns out, but you can help protect yourself from infection by taking simple precautions.

For those traveling at home or abroad, the thought of contracting an adventure-ending virus or apocalyptic-esque bacteria can be daunting. It’s especially daunting if you find yourself drinking beers out of booties regularly, slurping water whilst surfing your creature craft in a hole (acting as a floating undercut to passersby), or otherwise living an amphibious lifestyle. Once, after drinking a beer out of my shoe in Ecuador, I spent the next 24 hours convinced that the end was nigh. 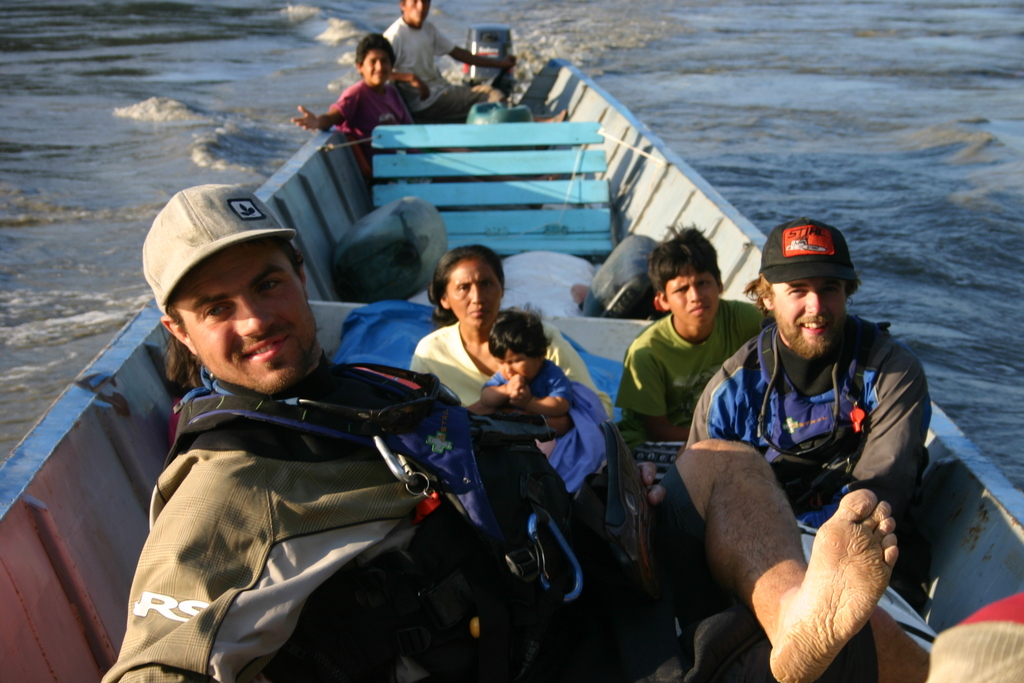 Maybe it wasn’t the end, but it sure was no fun to have a parasite living inside of me, especially since it was preventable. Just ask Ben Marr, who has contracted leptospirosis, proving that anyone can be affected by bacteria – even guys that throw kick flips off of 30-foot waterfalls and make even the gnarliest rapids on the Stikine look suave.

According to the CDC, Leptospirosis is one of the results of bacteria that lives in soil and fresh water and can be found more commonly in tropical climates. Just like boaters, it loves to play in the rivers right after, or during, heavy rain. The origin is most commonly traced back to infected animal urine. The infection can live for months outside of a host. It is contracted by humans through open wounds and mucous membranes, like the mouth, eyeballs and nose. Good news for those with a spouse, person-to-person contact is extremely rare. Probably as rare as boaters with spouses.

Signs and symptoms for many of these illnesses include headaches, chills, muscle aches, vomiting, jaundice, red eyes, abdominal pain, diarrhea and rashes. Basically, if your symptoms after a big night at the Dirty Shame in Crouch, ID persist for more than 24 hours, you should probably get it checked out. Failing to do so could allow the infection to progress as far as liver failure or spinal meningitis. Yikes! Don’t worry about the rash ladies. The doc gave Ben some antibiotics. He says it’ll clear up in a couple of weeks. 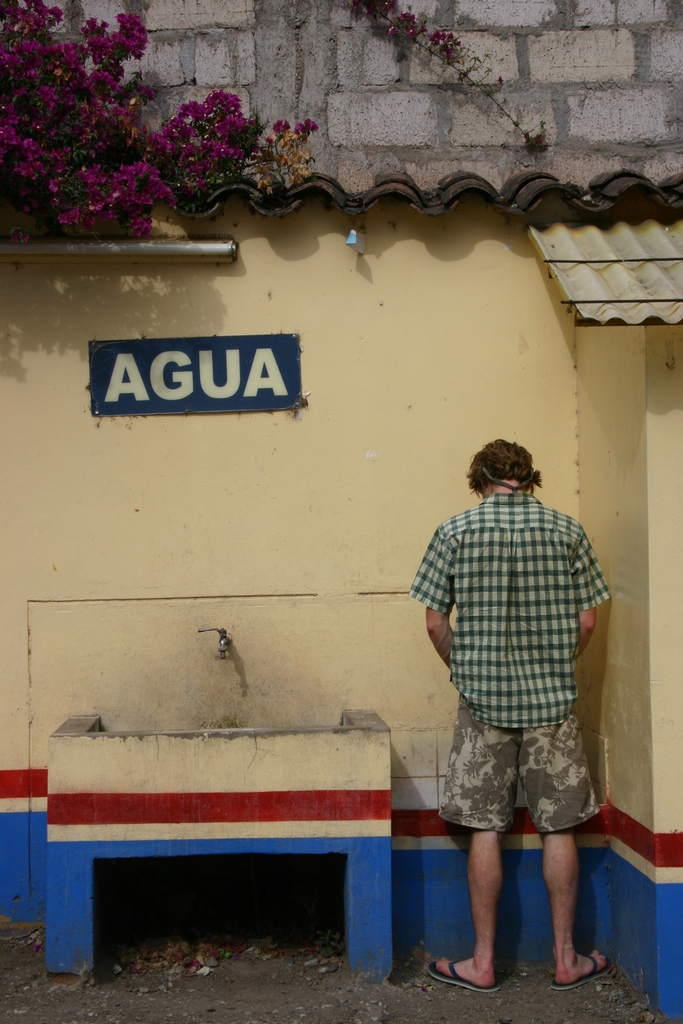 Viruses are most commonly considered simple submicrotic parasites of plants, animals, and bacteria that are unable to replicate without a host. Bacteria, however, are free agents that can live without a host in both water and soil and can replicate as seen fit.

The thing about all of these illnesses is that they are everywhere, and sometimes you just can’t help but swallow some water or get splashed in the eyes when going rounds in a hydraulic. Personally, wearing diving goggles, although stylish, is just not my thing when paddling. There are simple things that you can do to educate yourself and help prevent infection in most cases concerning bacterial infections like Norwalk. Here are a few ways to help keep yourself from getting sick.

Filter, filter, filter! Whether I find myself in the backcountry of the U.S. or on the rivers of foreign countries, I am always conscientious of waterborne pathogens in my drinking water. There are a number of companies out there producing solid water filters that will filter out just about everything nasty. When traveling in a group, I prefer to use a Katadyn gravity feed filter. It’s truly a lazy man’s pump that gets the job done so I don’t have to. When visiting seriously questionable locations, I’ll take it one step further and treat my water with a chemical solution, which is the equivalent of bleach (I have even done this in some suspect hotels in South America and India). Sure, it doesn’t taste great on the pallet, but that is the taste of victory over water born bacteria!

While battling dysentery in India, I came to realize the necessity of hand washing. Not just average hand washing. I’m talking about deep down, get-under-every-nail hand washing. I always try to carry a small personal bottle of soap on trips, as well as a bottle of hand sanitizer for those times when a proper water source is nowhere to be found. Even at busy commercial put-ins, the forest service often doesn’t provide a hand washing station. Therefore, if someone touched an infected surface back in “the real world” and didn’t wash between then and pushing off, they are introducing bacteria into the group. Lame. Lesson here? Make washing your hands the last thing your crew does before pushing off for days of communal river living fun. 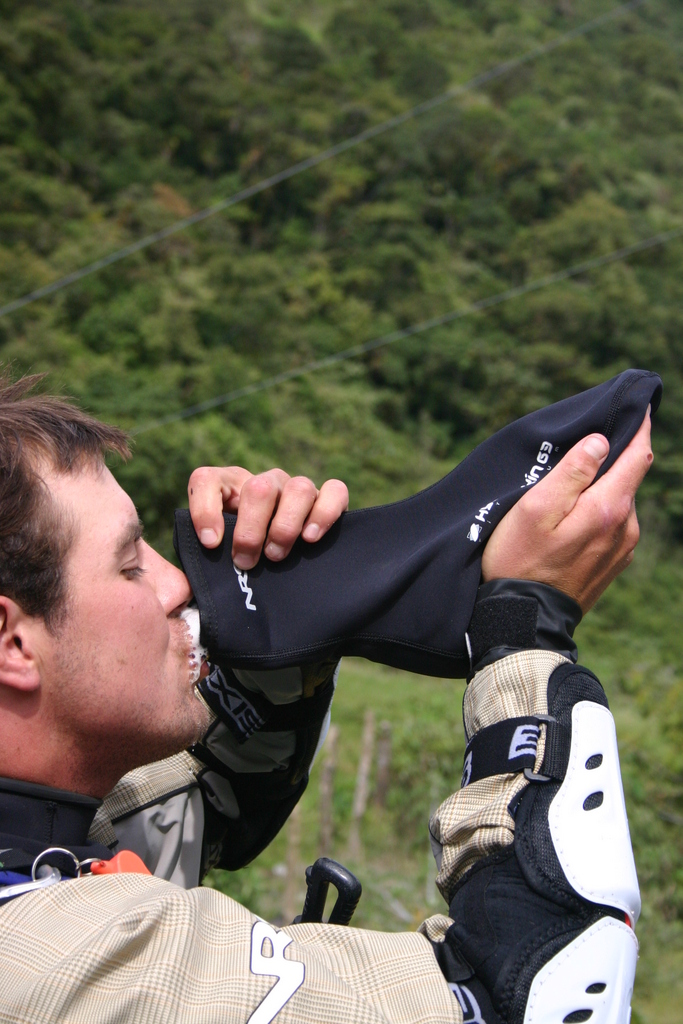 If you can, wear nose plugs if you’re going to be upside down often—i.e. surfing. Use ear plugs to prevent ear infections (I recommend Mack’s brand). Use swimmer’s ear drops to get that last drop of moisture out post paddle. Don’t drink beer out of gnarly booties if at all possible. (This is highly difficult if you have friends like mine that won’t allow you to hear the end of it.) Perhaps keep a clean wetsock on hand. That way, it’s sanitary-ish and won’t waste beer through drain holes. Win, win! Filter or boil drinking water. Practice overly-diligent hand washing. Bring your own cocktail mug to the party, always. Patch yourself up if you have cuts or abrasions and clean/irrigate the wound until you want to scream. I once lacerated the webbing of my toe on a Nepali kayaking trip. Talk about difficult to keep clean. 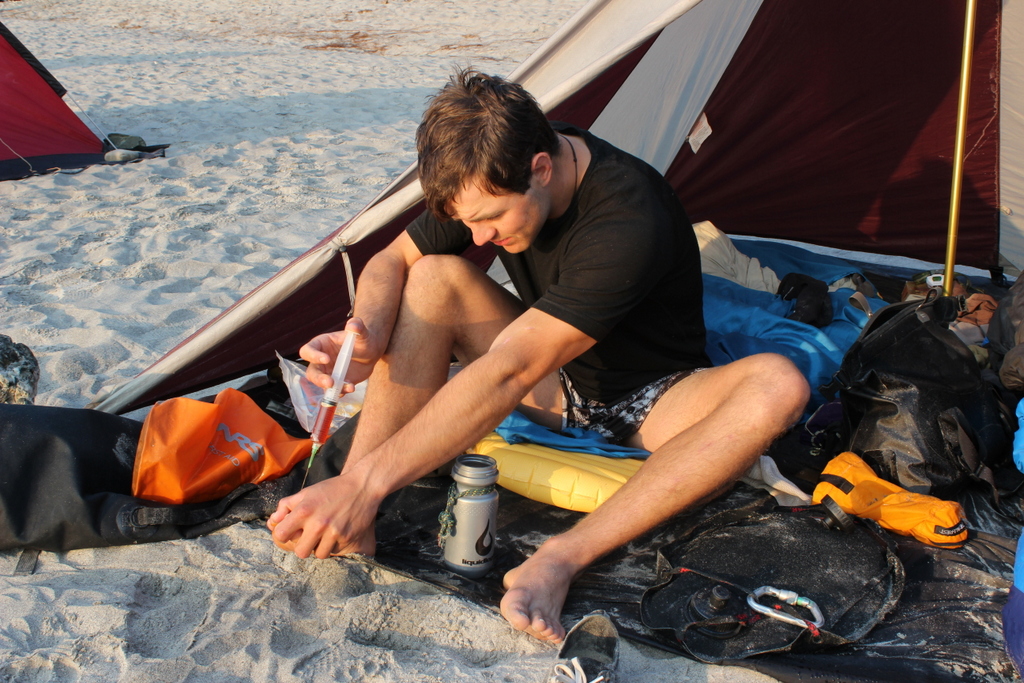 Bacteria are everywhere. Illness can be contracted at any time, but at least we can reduce the vectors for infection through diligent hygiene and common sense. Get out there. Have fun. Paddle hard. Fight the battle against bacteria and viruses one bleachy gulp or hand wash at a time!