Standing hip deep in the South Fork of the Salmon River, I looked at the SUP pinned on a rock, mostly underwater, paddle missing, daylight running out.

Maybe this wasn’t such a good idea.

I’d kayaked the South Fork several times at high water, when the river is big and challenging, but I’d heard it was just a relaxed ducky trip at 1.9 feet on the gauge. I convinced my dad—a rafter, not a kayaker—that he could manage the run in his inflatable kayak. I thought about paddling a hardshell, then decided it wouldn’t be much fun at these flows. But what about a SUP?

On Saturday of Labor Day weekend, my dad and I, along with Boise friends Bill and Tony, drove from McCall over Lick Creek Pass to the put-in, where the Secesh meets the South Fork. Even in a state known for its remote wilderness rivers, the South Fork is special. Due to its challenging rapids, far fewer people float it than the Middle Fork, Main or Lower sections of the Salmon. Some estimates put the numbers at only a few hundred per year. Even on the busy holiday weekend, we were the only paddlers at the put-in.

I strapped three small drybags on the deck of my Baron 4, pawned off my pump and breakdown paddle on my dad, then launched on the river with fingers crossed that my setup would work. We floated through the spectacular South Fork canyon. Standing up on the river provided a unique perspective. Gin-clear water slid past beneath my feet. I watched trout and whitefish slip between scoured granite boulders. The Class II and III rapids we encountered proved challenging on the loaded board, but the river moved slowly enough to remain manageable.

After a few hours of paddling we arrived at Devil’s Creek, the first big rapid of the run. I confidently identified my line after a long scout, then immediately fell off the board upon entering the rapid. I managed to claw my way into an eddy and got things together just in time to eat it again on the second half of the rapid. This could be a long river trip, I worried.

A maze of relatively steep rapids followed Devil’s Creek, demanding my constant attention. Confession: I hadn’t done too much stand up paddling before this trip, much less with a loaded SUP, but I figured I could fake it using kayaking techniques. I also had another advantage—I had just finished shooting a series of whitewater SUP videos with NRS SUP athlete Nikki Gregg (shameless plug, premiering soon at nrs.com).  I’d listened to Nikki repeating the same instructions about a thousand times while editing the videos, so ethereal snippets of her coaching floated through my head. Get in the crouching tiger stance. Take a knee if necessary. Use a low brace.

But Nikki’s advice could only take me so far. By far the most difficult challenge was avoiding rocks—when I hit a rock, the board would stop, but I would keep going. By halfway through the first day I had broken two small fins by dragging them over too many rocks. Finally I gave up on using fins, deciding it was better to sacrifice tracking for the ability to slide over rocks. Anyway, there weren’t many opportunities to go straight since there was always a rock to avoid downstream. 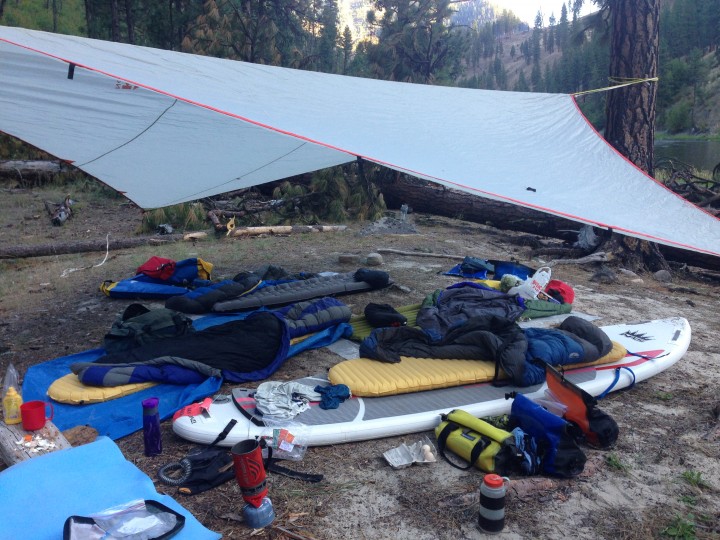 On the second morning, I made some changes. I strapped my dry bags together more securely. I shortened the paddle to make it easier to switch sides and make quick strokes. I inflated the board to its maximum recommended pressure, 15 psi. And I decided that strategic kneeling would be key.

Many rapids on the South Fork are so long that falling off can put you in a bad situation; taking a knee on the steeper drops helped increase my stability, allowing me to stay on the board and maneuver to the next spot. I also started proactively high-siding when I hit rocks sideways to help keep the board from pinning.

I’m not sure if it was improved technique, increased flows, or just the fact that the canyon had narrowed and the rapids were cleaner, but I starting having fun and even running some rapids with style and grace.  Of course, I still got worked quite often, but I found I could stand up through some of the bigger features. While a few standout rapids proved more difficult, almost all of the in-between rapids were challenging enough to be exciting, but not so steep that I got out of control. The South Fork doesn’t have much flatwater, so I had to maneuver constantly, even in the mellower sections.

After a second night on the river, we floated out to the confluence with the main Salmon to start our 20+ mile flatwater paddle to the takeout. Luckily, I had a secret weapon—a 9” fin hidden in my dry bag. With the fin installed, the board tracked straight instead of turning with every stroke. I took five hours to paddle out, riding on roughly 4,700 cfs. Trying to keep pace with the kayaks was not an easy task, and Chittam Rapid, just above the take-out, was a welcome sight.

In the end, I concluded that 90% of the South Salmon (at low water) is high-quality, manageable fun on a SUP. The other 10%, you’d better just hold on and try not to wreck yourself on the Idaho granite.