Lacey’s four-year love affair with the Rio Marañón in Peru continues despite unfortunate plans to dam the river. Her frustrations have increased as her conservation efforts seem to fail, until Remando Juntos, an outreach project that has rejuvenated her hope.

There’s a Ben Harper song that continued to run through my head as I rowed the Rio Marañón in Peru last summer. The chorus, I am blessed, I am blessed, I am blessed to be a witness, played over and over again, through countless rapids and lulls of flat stretches. Do you know the song? The Rio Marañón is located in the Andes of Peru and is the main-stem source of the Amazon. The first time I heard about the river was in 2012. I’ve returned to it every year since 2013 and have been fortunate enough to have the time, the health, and the resources to experience the Upper Amazon (Rio Marañón) many times now. So you have to agree, I am blessed, which is why the song resonates with me so strongly. But you may be wondering what I mean by, to be a witness? 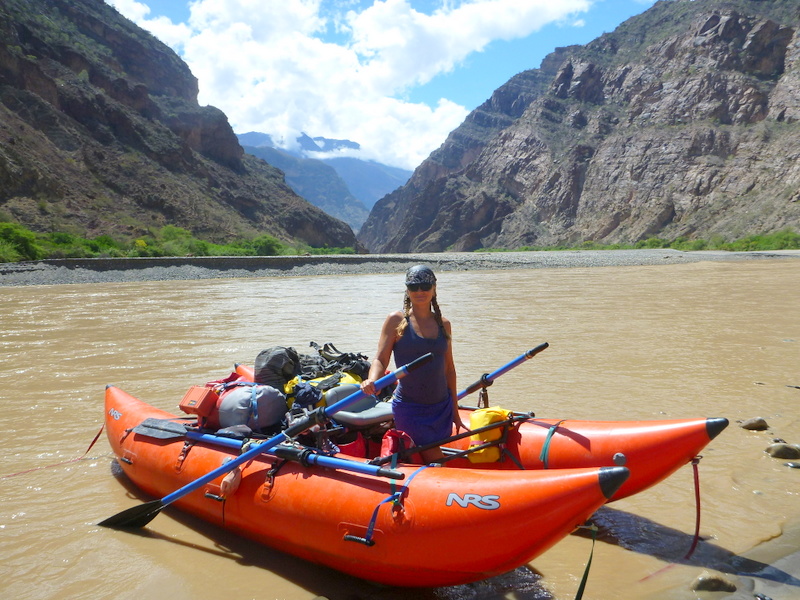 I was a bit naïve on my first trip. I went solely for the thrill of whitewater and to experience the exploration of an exotic and little known river that’s threatened by the development of 20 dams. I walked away from that first take-out with a much more powerful feeling than the fleeting adrenaline of running whitewater. I realized just how important the river is to the indigenous Awajun living in the jungle. They depend on the river’s bounty to sustain their traditional way of life and know the development of dams will destroy their ancient culture and centuries-old techniques of living off the land. They’re fiercely defending their territory against this development.

I must warn you: if you venture into the very lower reaches of the Marañón, deep in the jungle, be careful. We thought we had the correct permission once. We did not. Our group was detained and put on Tribunal. Other groups have been chased with machetes and hidden on an isolated river island, or have encountered angry Awajuns throwing rocks at them. Even with our negative detainment situation, I still feel blessed to have been a witness to the passionate Awajun and their intimate connection to the Amazon. Their intense defense of their ancestral homeland will hopefully chase out the dam builders. 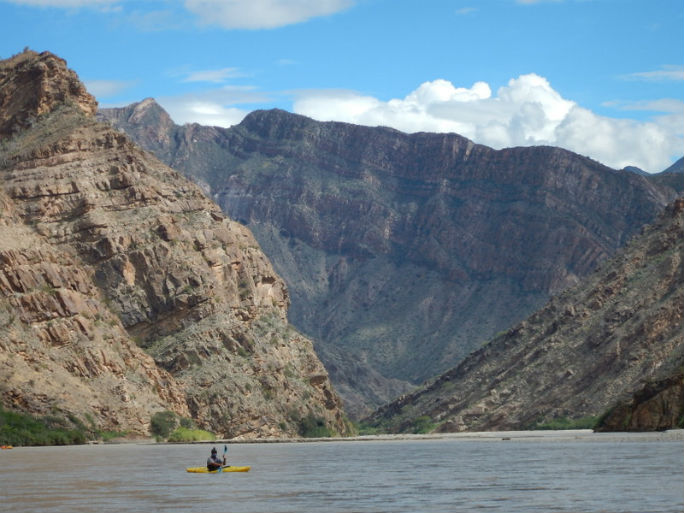 Through the years I’ve developed strong ties with some of the rural people living upstream of the Awajun. They’re an interesting mix of Amerindian (indigenous), Mulattos (mixed-race) and Mestizo (European and Amerindian descent). Most of them have never lived outside of the Marañón basin. They lead a completely self-sufficient life in harmony with nature. They have things that city dwellers don’t typically think of: naturally nutrient-rich soil, which provides for an abundance of crops; clear streams and rich brown clay for their adobe homes; thick palms for their roofs; and a huge river teeming with numerous species of aquatic life. They have a simple, yet sustainable lifestyle due to the healthy, and still intact, river ecosystem of the Rio Marañón.

They’re a proud, independent bunch who manage just fine in the isolated, dry, cacti mountains of the Rio Marañón. These are the people that will be immediately impacted if the Chadin II dam goes in. I have visited the villages of Tupen Grande and Mendan that will be inundated as well. These people will be displaced and lose their lifestyle forever. I’ve attended festivities in their communities; I’ve mourned with them beside the grave of a beloved son; I’ve witnessed their joys and sorrows. I’m honored to have been welcomed into their community and have grown very fond of them. It hurts my heart to hear the stories of deceit and lies spewed from the mouths of dam builders to the locals. Yet, that Ben Harper chorus keeps running through my head “I am blessed, I am blessed, I am blessed…”

Over the last four years, I’ve been involved in spreading the word about this magnificent river corridor and more people have become aware of, and even visited, the area to experience the grandeur for themselves, but sadly, the dams are still progressing. I’m frustrated, as are the inhabitants of the Rio Marañón valley. I’m starting to believe it may not be enough to simply bring American folks under the campaign guise of “eco-tourism.” I want to do more. We need to do more. But I’m at a loss as to what exactly to do.

What techniques can stop huge corporations, governments and banks from further destruction of the Amazon? Eco-tourism can’t be the only answer. While visiting the villagers on our last trip, the natives continued to ask questions like, “What can we do to stop the dams?” and “What are you doing here? And even more disheartening, “What are you doing to help us?” We didn’t have satisfactory answers. No one seems to have a solid strategy in place to make a real difference.

No one except Paddling with Purpose, a new environmental campaign that’s starting to turn my frustrations and inadequacy as an environmental advocate into hope. This campaign has the goal of saving the Upper Amazon from being dammed, and as a result, also preserving the ancient cultures living along the Rio Marañón. When I read statements from the Paddling with Purpose website, including one that said, “Our team of young Peruvian activists is disseminating facts and creating interest in this issue. Working under the NGO Conservamos por Naturaleza, we have a solid foundation from which to launch this campaign,” I was intrigued. The more I uncovered about this campaign, the more I believed that this was a movement that could be effective in achieving our mutual goal of saving the Marañón. I was encouraged by the fact that there were a lot of Peruvians involved. I believe the most effective agent of change will be to support the Peruvian conservation efforts already underway.

The founder of Paddling with Purpose created an outreach project called Remando Juntos, translated as “rowing together.” In 2015, a group of young, urban Peruvian activists were recruited to participate in a 200-mile river trip down the Rio Marañón. I immediately joined the international team of river guide volunteers supporting Remando Juntos. This monumental event—rafting the Rio Marañón and interacting with the locals inhabiting its banks—was captured on film by renowned filmmaker, Francisco Campos-Lopez. The film, “The Serpent of Gold,” will be released soon. 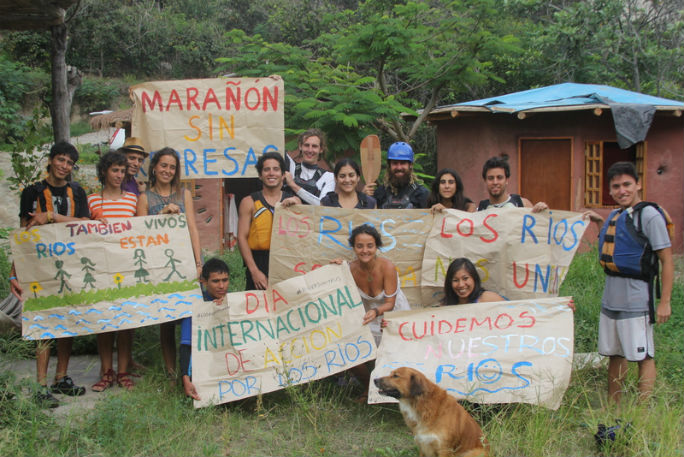 I was looking forward to meeting this group of young, environmentally aware Peruvian activists, most of whom didn’t have any river experience. The core Remando Juntos team was a dynamic mix of ten Peruvians, all in their twenties. Ana was a Forestry Engineer, Adriana a biology student, and Alonso a local activist from Lima. I was mesmerized by long conversations with Jorge, who lives in Celendín and is a recent Environmental Engineering graduate. But even more impressive than his education was his environment and human rights activism. He writes a blog, Mi Mina Corrupta, which informs the public about the problematic mining in Cajamarca and elsewhere in Peru. A few years ago, his participation in protests landed him in jail, but the negativity hasn’t stopped his efforts or passion for exposing the corrupt practices of large corporations. Then there was Bruno who’s making progress with conservation in many parts of Peru as the director of Conservamos por Naturaleza. I’m especially hopeful about Lizbeth, a lawyer specializing in social and indigenous issues arising from development; she has an outstanding social presence as well.

The trip with this amazing group of Peruanos was captured on film by a team of three. Luis—also known as camote (sweet potato)—is a working photographer and videographer. He was assisted by Samuel, an audiovisual communications student, and Marisol, a talented recorder. A local kayaker named Luigi, who has family links to a Lima-based adventure company, finished out the roster. Luigi was the only team member with prior river experience.

Going into this project, I assumed the Remando Juntos team would be most in awe of the natural grandeur of this canyon, and they seemed to be impressed. However, it appeared to me that what they gained most was a greater appreciation for how the indigenous and rural people live a simple, sustainable, sincere life close to nature. One of the things that surprised me the most about the Remando Juntos team was that prior to this trip the young urban Peruvians didn’t seem to realize that a population of rural Peruvians still live a traditional life within the jungle and along the river. It seemed to me that this expedition opened their eyes to the idea that damming the river will have tremendous impact on real people, not just the natural world.

During the three-week journey we stopped in many villages. A pattern of interaction soon developed. First the Remando Juntos team would establish a good relationship with the villagers by spending a substantial amount of time chatting and simply hanging out with them. Generally, a meal was shared, followed with more socializing and a rousing game of soccer or volleyball. We usually camped a night or two on a beach near the village. In the evenings, the RJ team would produce a laptop, a projector and a basic white bed sheet to use as a screen, and they would give a presentation about the effects of dams.

One short animated film about how mega-dams damage the environment and kill off fish populations seemed to really reach a lot of the villagers; I could see that light-bulb flicker. As they watched this video, their eyes grew bigger and mouths dropped as they came to the shocking realization of what would happen to their local fish populations once a mega-dam was installed. If the mega-dam is installed, many of the fish will die. They depend on the local fish for food.

I was fascinated by what was unfolding before my eyes: two extremely different groups of Peruvians indulging in profound conversations and teaching each other. A grass-roots movement was taking place. The two groups’ daily lives and routines couldn’t be more different, yet solid communication, understanding and concern passed between them. I found this to be very uplifting; as I witnessed and participated in these meetings, hope bubbled and the chorus continued to echo in my mind, I am blessed, I am blessed, I am blessed…

Author’s note: More and more urban Peruvians are teaming with their rural and indigenous brethren to protect the Maranon and other rivers from mega-dam projects that have the potential to destroy the entire Amazon system. The grass-roots environmental movement is gaining steam, and it’s due to the efforts of Conservamos por Naturaleza, Remando Juntos, and other Peruvian organizations. But I also need to recognize the importance of International NGOs as well. International Rivers has been spreading the word for years. A recent addition to conservation efforts is the Waterkeeper Alliance. Ben Webb, founder of Paddling with Purpose, completed the rigorous application process to be accepted by the Waterkeeper Alliance. An agreement will be finalized in early 2016 for a Maranon River Waterkeeper staffed by Peruvians and supported by a strong network of international conservationists. This all looks very promising, but we cannot let up on the resistance and push to save the Upper Amazon. Each time I visit, I see more survey teams. Our strong resistance and the utilization of techniques for supporting Peruvian activism, needs to continue. However, last summer proves that positive achievements are on the horizon.

Editor’s note: Read more about Lacey’s experience on the Marañón: “Rio Marañón: Expedition to the Grand Canyon of the Amazon” and “Peru’s Rio Marañón: Is it Another Grand Canyon?”