Ode to the Small Things: Moments Guiding on the Grand Canyon

Thanks for the coffee.

It’s a chilly morning, and there’s just a hint of fog curling in the huge eddy. I sit up and wrap my flannel sheet around my bare shoulders, careful not to dip the corners of my sleeping kit into the bilge water. I smile and raise my mug in gratitude to the cooks in the kitchen, to the stealthy early morning beverage delivery. On another raft, one guide is stretching as their assistant continues to snooze on the front hatch. On a third raft, someone is writing a letter to send by mule at Phantom Ranch. 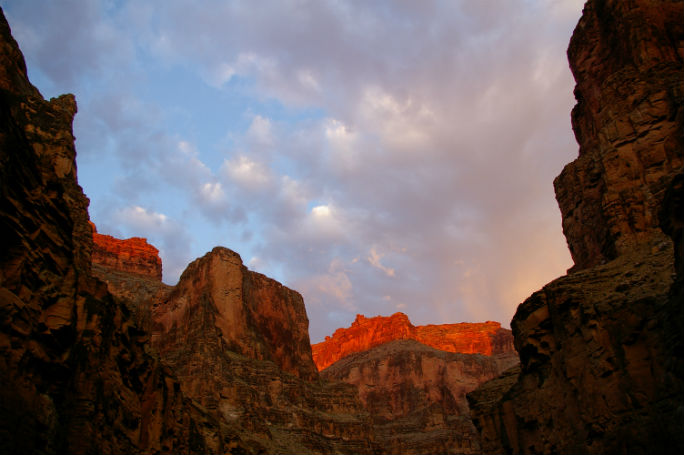 If you’re a commercial river guide in the Grand Canyon, the morning usually begins in one of two ways. You either wake up 30 minutes before dawn to “blast” the hot water for coffee, or you have your morning beverage delivered to you in bed. Yeah, you read it right: DELIVERED IN BED.

Is there anything better than waking up to a mug of coffee—steaming, just within arms reach? Maybe you prefer tea instead? Berry Detox tea with half a spoonful of honey? You got it. Wake up to a glass of juice? Well, I think that’s your inner eight year old speaking up, but whatever. If it’s not your day to make breakfast and beverages, then you get your drink of choice delivered. The night before, it helps if you make a perfect landing zone between your pillow and your .50 cal ammo can stuffed with earbuds, glasses, headlamp and personal toiletries. 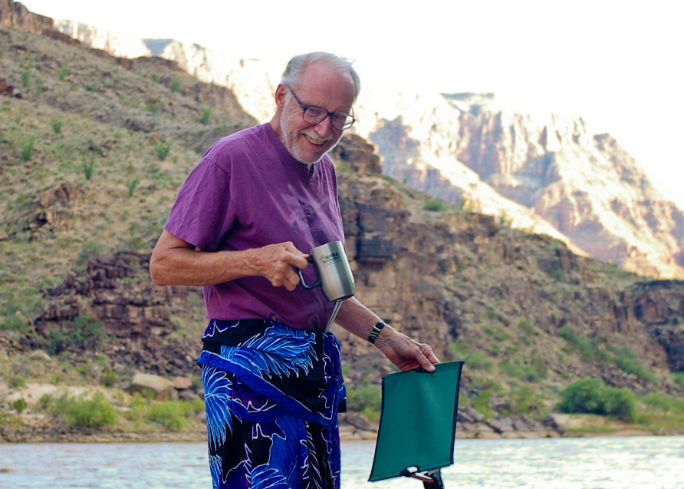 See, at the beginning of each trip, the five guides and two assistants write our drink preference on a piece of tape on the inside of our large commissary box lid (the one with the three-gallon coffee pot in it). I’ve seen someone change their drink order halfway through the trip, but it doesn’t go so well—once you remember someone’s order, it’s hard to learn something different. Unwaveringly, my choice is coffee with cream, or more precisely, whatever is in the little red and white can we refer to as ‘evapo.’ The coffee has probably been poured before all the grounds settled, floating a little archipelago of crunchiness. Sometimes I filter those through my teeth; sometimes I just “drink the damn coffee and quit complainin’!”

Some mornings, I grab my dry duffel, prop it against an oar, lounge back to enjoy the coffee and watch the sun inch down the cliff face and the mergansers dive for fingerlings. Sometimes I like to get up and tweak a few straps, retie our boat flotilla, organize my maps. Lately, I’ve been taking more time to gather more material, quotes and photographs for my morning talks as Trip Leader. Today, I will end my morning talk with a short meditation on gratitude. 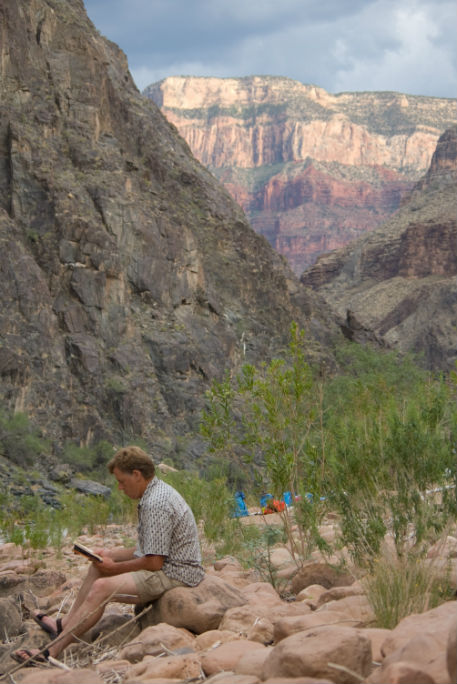 The early morning is such a glorious moment and sets the momentum for the rest of the day. For me, this simple exchange of gifts and gratitude is huge. It’s about getting to know one another, investing in relationships, and sharing in a lightly intimate moment.

The Grand Canyon 2010—but it could have been any other trip. For four days, we had intense weather, torrential downpours and amazing waterfalls. Then, on the fifth day, the sky split, delivering both heaven and hell. 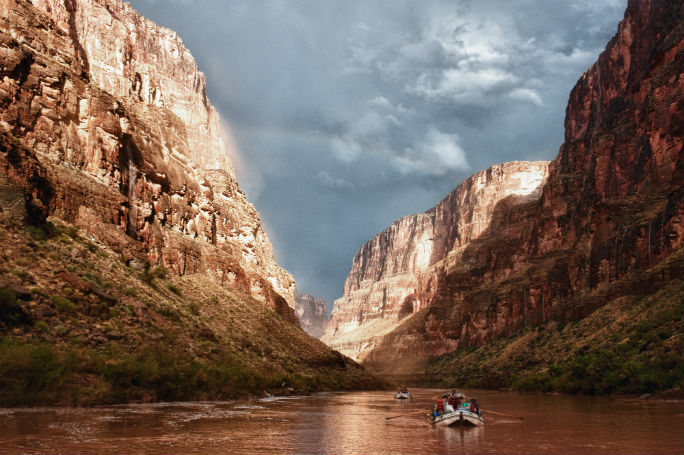 Two days downstream from phantom ranch, after a full interchange, guides and guests had already become fast friends. It was a small group, similar to a private trip. We had an afternoon of wind and spitting rain, an easy hike and short swim under a waterfall. It was blustery but mid-60s—what I’d call perfect weather. I was the last boat rowing downstream from Waltenburg, and at one point, about a mile up from the Garnet camps, sheets of rain and a deep darkness barreled through the canyon obscuring all the boats downstream. Less than ten minutes later, the sun cut under the clouds, sparkling on the wet canyon walls behind us. We relished this brief storm, refreshed by the water and happy to set up and cook dinner in dry clothes and a nearly empty deep blue sky. 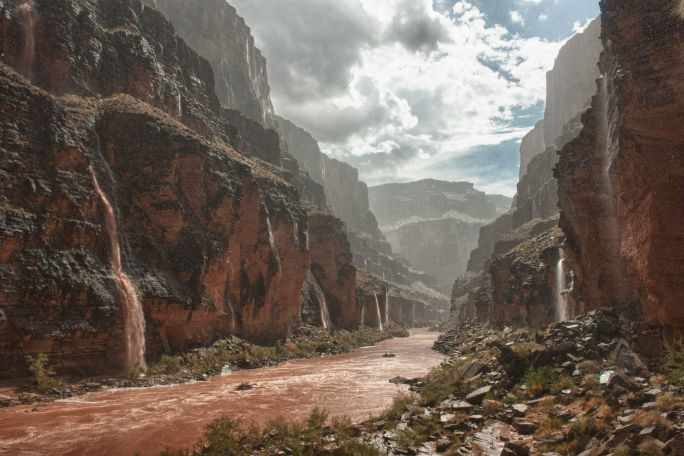 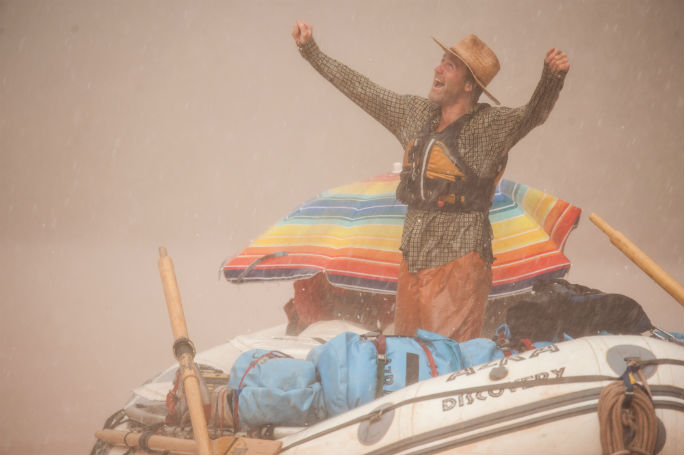 We found shelter for lunch under the overhang at Last Chance. We set up the stove and heated instant soup, cocoa, Folgers with flavor crystals. We changed into dry clothes. We loaned out fleeces and hats and long underwear.

I was tempted to say the old adage, “There’s no such thing as bad weather…” Because, here we were, fed, dry, (ok—dryish), but generally comfortable and downright in awe of the spectacle in front of us.

About 300 yards upstream, a giant wall of water thundered down a side creek, launching out over the river and staining everything red with its mist. A fellow river guide, Jim Norton, elbowed me as I stood there agape. “This crack will flow next,” he said. He lifted his eyebrows toward the amphitheater next to us, and the trickling stream coursing down its center. The amphitheater is just outside of the main camp. In fact, on a normal trip, campers often choose the ledges and sandy nooks on the other side of the mostly dry gully and carved out cliff wall. 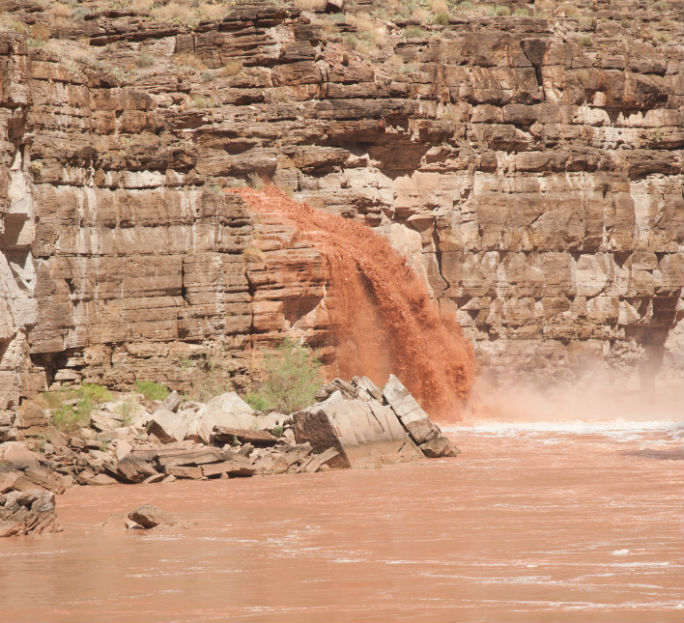 Part of the reason we chose this spot to rest and eat lunch is because of the protection. The overhanging ledge of limestone could cover the entire group. That knowledge buoyed my optimism. But, when the cut in the cliff wall did flow, I was no less stunned by the amount of water that fell almost within an arm’s reach of our refuge. If we felt small by the power of nature before, we were most certainly reminded of our fragility and mortality in the face of this.

The second half of that saying: “…There is only poor planning and poor equipment,” is true too. It emphasizes the importance of solid gear and efficient prep, and by extension the importance of making good decisions. But the whole phrase together is a kind of rallying cry. It says, “I can handle it,” “We are strong,” and, “Get ready, because we like to raft during the monsoon season.” This is more than an interesting and funny maxim; it becomes an entire ethos of optimism and hardiness. This is a key part of yelling into the maelstrom, “Is this all you got?!” The other part of being able to scream with the wind comes from a deep recognition that you don’t matter—nay, that the interconnection of the universe is built upon more than our neuroses of perfection and judgment. 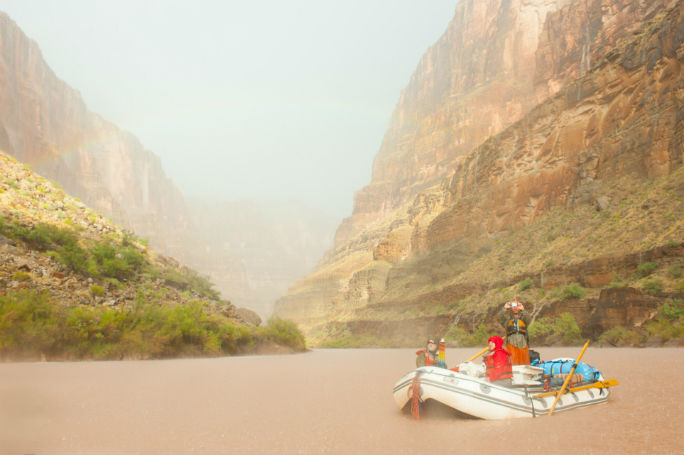 Get outside. Get wet. Bring a jacket.

I stood uncomfortably on a boulder, river right, just at the top of Crystal Rapids. The flow was somewhere around 14k cfs. I looked out at the tiny lateral waves bouncing off the left cliff and accelerating down the tongue. With one last dip, the line of bubbles riding the pillow waves exploded with curling foam, then folded toward the right, and collided with another wave coming back to the center.

During this scout, we’d been talking about our lines for a good 20 minutes already. I could see a range of emotions on faces nearby. Some people were giddy in anticipation. Some of the guides gave serious descriptions of the chosen lines to their guests. I was silent and nervous.

I was planning on going left. I still wasn’t confident in my line choice. Is it too high to go left? Am I going to get lost and flip in the center hole? Am I going to splat and flip on the bottom-left cliff? 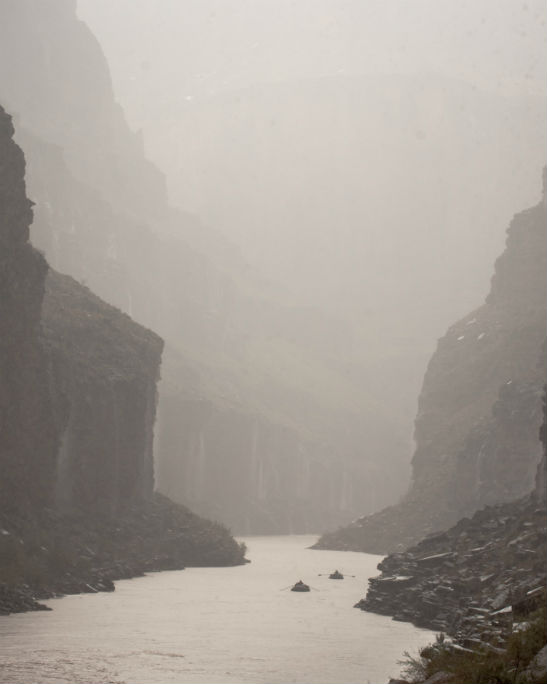 I looked at the boulder I was standing on, at the sandals on my feet, and instinctively reached down and tugged on a couple straps. The rest of our group was clustered downstream, examining the right line and gesturing with contortions. A fellow guide was simulating the reverse entry “momentum run,” and with a smooth final pivot, arms mimicking the motion of pushing on downstream, they demonstrated a clean run, clear of the hole. The guide’s body visibly relaxed and even though they were facing away from me, I could tell they were smiling. 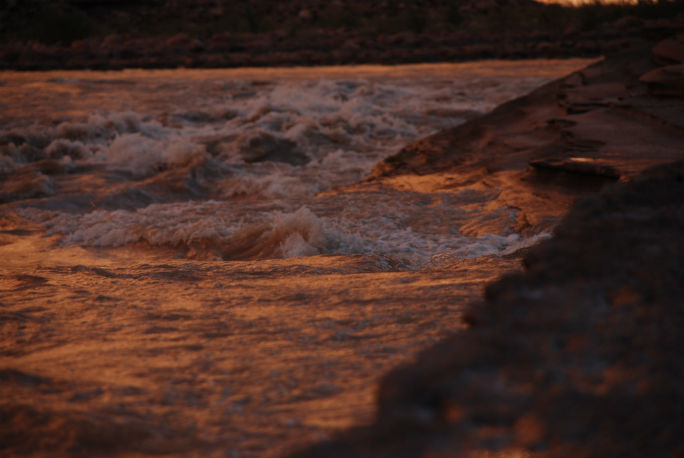 I turned back to the curling tip of the emerald tongue, trying to count, again, how many little crests of laterals, and pour-overs, form upstream of the very dangerous Slate Creek Hole. The left line looked so thin from shore; both Slate hole and the center hole looked gigantic. My vision narrowed, the horizon lilted and I slipped a little on the wet boulder. Nauseous and clammy, I hunkered down and looked directly upstream, took a deep breath and stood again. Keeping my gaze soft, I let the horizon settle. I brought my attention to standing as tall as I could, reaching my hands as high as I could, pulling in as much air as I could. And as I let my breath out, I refocused my attention to that elusive point, and everything that surrounds it, somewhere at the center of the river, as far upstream as I could. 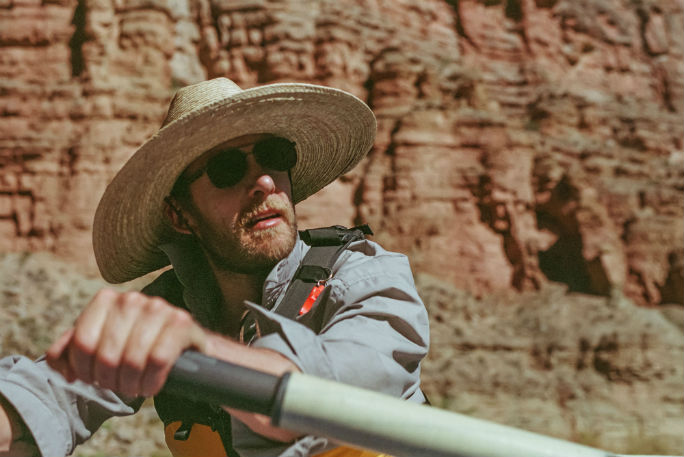 It was an unintentional call to my best self. It was a call to my ‘interconnected self’ through yoga. I didn’t know it at the time, but I was drawing an inner power from the verticality of my chakra and horizontality of the earth. I tied it all together through the intersection of my mind’s eye and a specifically vague singularity of focus called the drishti. It all happened within a few deep breaths, and I didn’t put words to it. The words don’t matter.

I don’t really remember walking back to the raft. I’m sure that I was only half-aware of the tall grasses that I had to brush away from my face. I’m sure that it was second nature to untie the same tautline hitch that I untied at every beach. On the raft, I had a sip of water, smiled and spoke again to my passengers. “We are taking a different line, a challenging line, but no less safe because of it. Check to see that things are tied in. Hold on well, and don’t forget to look around! Beauty is all around us!” 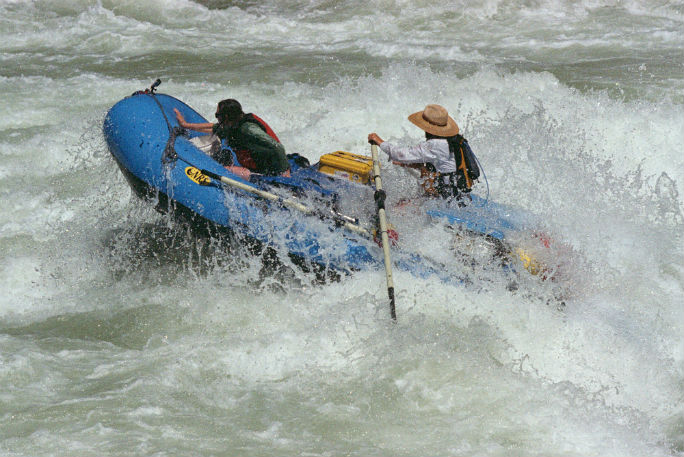 It all comes full circle when the raft is drifting in the slowest water, two feet off the left bank, just upstream from the acceleration of the tongue. I take one more deep breath, find that connection between my mind, all of the sensations of my body, the slightly accelerating raft, and the unfolding, myriad world of possibilities downstream of us.

I saw the laterals. I saw the Slate Creek hole. I saw the center hole. I gave one little push farther left, avoiding the laterals’ surf right. I thought to myself, “Find the highway – Dang! You’re already on it.” And suddenly I saw everything. On the cliffs, river left, stood big-horned sheep. There was a private trip camped halfway through the rapid and they were watching our line. I could see one of our other boats avoiding the wall, bottom left. Another of our boats was pulling hard for the right line through Lower Crystal. One of my passengers glanced back at me, grinning and I hollered back, “YES!” Not only did I feel the highway that I had only heard stories of, I felt that I could see everything, and do anything. 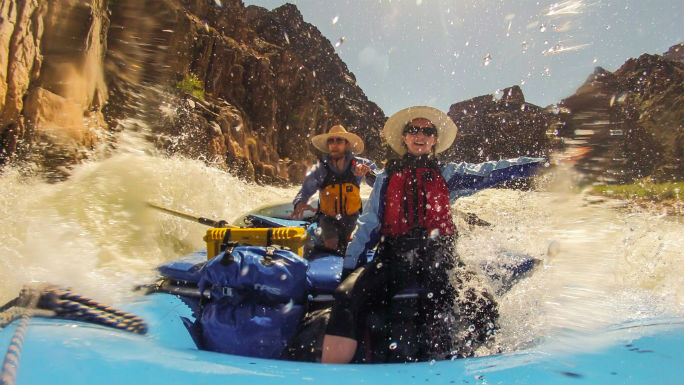