Every February, as summer begins to warm the Southern Hemisphere, kayakers, rafters, and river lovers trek to the Futaleufú Valley in Chile. Paddlers battle for style, finesse, and speed. Locals mingle and share their culture with tourists. All leave with a new appreciation for free-flowing rivers.

Among the mountainous regions of Northern Patagonia, lies one of the most well-known ‘big water’ rivers in the world. The riverbed, consisting of massive rock and the steep gradient, creates the level of whitewater one would expect when staring up at the Chilean Andes. Turbulent hydraulics and mile-long rapids made of sapphire water create an experience thrill-seekers from throughout the world crave. Every year the Southern Hemisphere rotates its way a little closer to the sun, and it seems that the violent flow of the river pays homage to the wild geography of the Futaleufú Valley. Along with the sunshine, paddlers embark on their own pilgrimage to play amongst it. 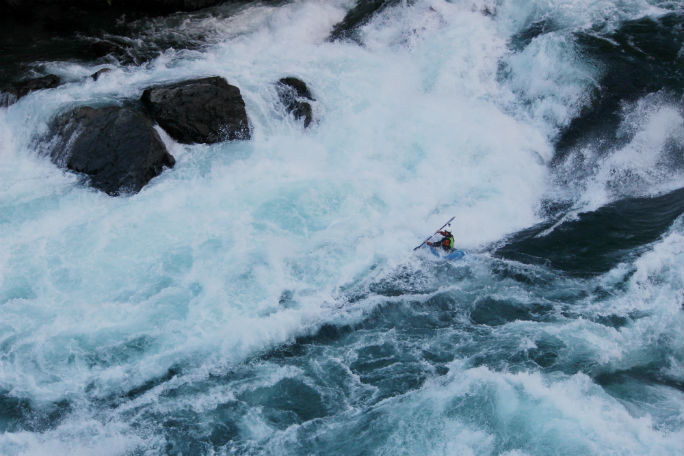 Named after the mighty river that carved its valley, Futaleufú is a sleepy little town just over the border from Argentina. Oxen the size of Volkswagen vans pull carts from its open plains, nestled next to the lush river banks, and into the hills. Mountains jut up on either side and watch over local farmers and the old-fashioned lifestyle that could only be held onto by a place so rooted to the earth by its raw geography. It’s a place seemingly locked away in simpler times, with a few amenities smuggled in from the outside world. Shiny Toyota diesel pick-ups often roll through town, careful not to spook the Caballeros on horseback, a common sight of contrast amongst the dirt and cobbled streets of Futaleufú. 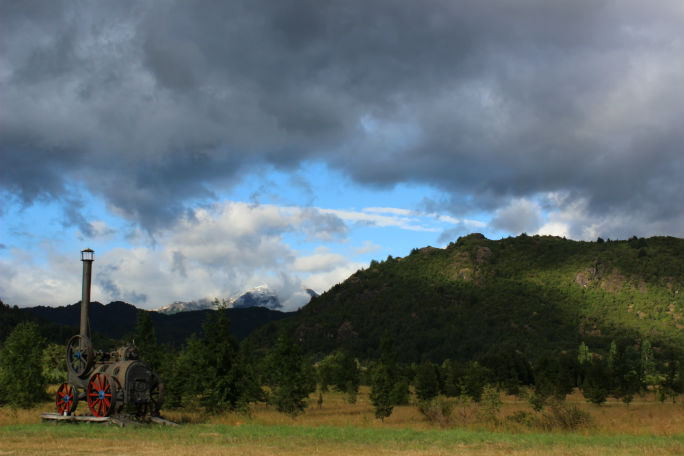 After a hard day of kayaking, rafting or flyfishing in the nearby river, or a day spent climbing up and rappelling down one of the many side canyons the valley offers, visitors might stroll past one of two local street shacks. Hungry patrons can order up Chilean favorites like completos, or my favorite, hamburgesas con huevos. Around the corner stands Sur Andes, the only local shop serving coffee not poured from grainy tubs of instant Nescafé. When the weather takes a turn for the worst, Sur Andes is the spot for the best wifi connection and melon. I often found myself with a window seat and a steaming mug of tea watching the rain fall, always wrapped in my hooded wool vest and beanie, made just down the road by the wrinkled hands of Doña Alba.

Alba has been sheering sheep and knitting garments for the better part of her life. A local of the valley, (I’d say she’s in her late 60’s) Doña Alba spends much of the dark winter with her neighbors behind a wool-wheel spinning rough sheep-hair into fine yarn and dying it with roots and berries from the valley. Nestled next to a fire, sipping the local drink of choice, Matte, a strong green tea more potent than coffee, Alba creates pieces of work, for locals and visitors alike, for purchase or trade come spring and summer. Sweaters, beanies, leggings are essential pieces of warm gear to add to the drybag. They also make great gifts to take back home from a long trip. Woolen goods like this can be found throughout the pueblo of Futa, each with the individual style of their creator. 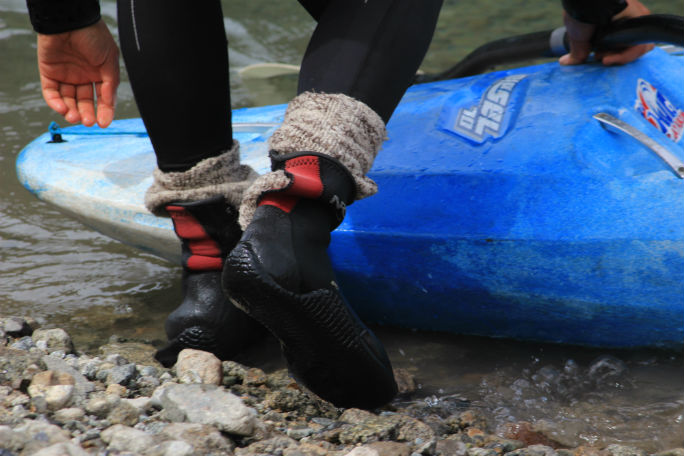 Within the span of a few weeks, the population of dirtbags amidst these dusty streets doubles. An eclectic gathering of nationalities including, but not limited to, Chileans, Argentines, Kiwis, Americans and Spaniards file into every nook and vacant campsite within the area. Camps and backyards along the river become filled with tents and tarps. Fancy Black Diamond-Megamids lie next to makeshift tarpaulin shelters made from material bought at the local hardware store. Muck boots are always a safe purchase or worth the extra luggage space. It rains in Futa, even when the forecast doesn’t predict precipitation. 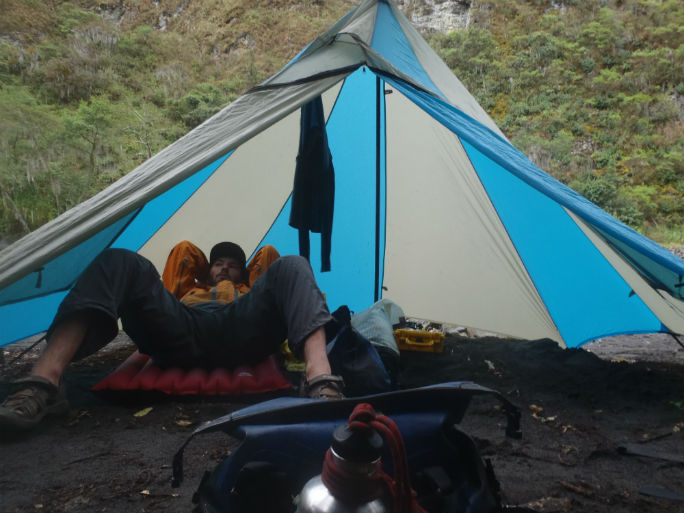 Shop owners scrounge to round up enough Escudo, the favorite Chilean beer, to keep the town properly buzzed. Some of the more serious paddlers tend to abstain from their standard Escudo intake in hopes of staying sharp for the upcoming events. Living within a stones-throw from a local brewer, my finger was on the pulse when it came to finding the most micro of brews, typically made from local honey. The morning after a freshly tapped keg often led to competitors stumbling out of the starting blocks.

To hold the attention of many athletes and, hopefully refocus the global eye on one of its own threatened wonders, the Rio Futaleufú has become a platform for one of the worlds’ most-anticipated week-long whitewater events. Mitch Sasser and his wife Tatianna are the proprietors of El Martine Pescador (The King Fisher), far and away the nicest restaurant within 100 miles, and serving only locally sourced produce and meat. But, when Mitch isn’t cooking up incredible eats, he, along with some legendary boatmen who have been guiding and kayaking on the river for the better part of two-decades, have created an event that encompasses whitewater paddling in all of its glory. It began as a fringe idea, talked about during the Chilean summers away from their respective homes. Until one day, Futa became their permanent residence. With help from locals and volunteers, Futa Fest was created and today is one of the kayaking world’s most exciting events. 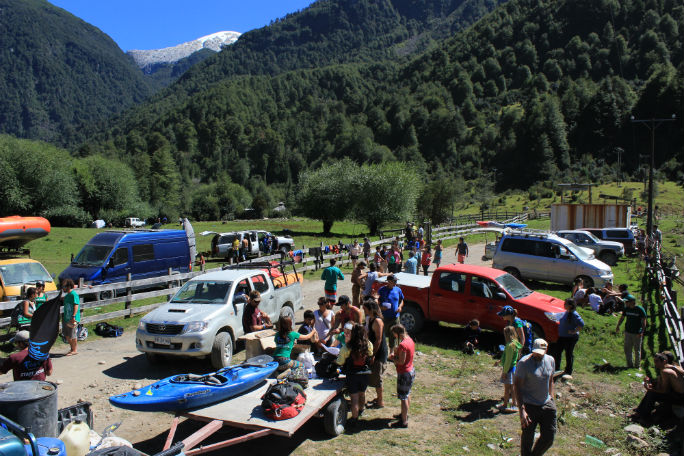 Under intense scrutiny from massive energy corporations like Spain’s Endesa Power Corp, the Futaleufú River is coveted for its powerful current and steep gradient. Two characteristics that have dam companies licking their chops and seeing dollar signs. To dam this river would displace most within the valley and provide few jobs, while effectively killing this gem and burying it in an underwater coffin, known as a reservoir. The Futa Fest brings awareness to what could be lost to the valley as well as the globe. 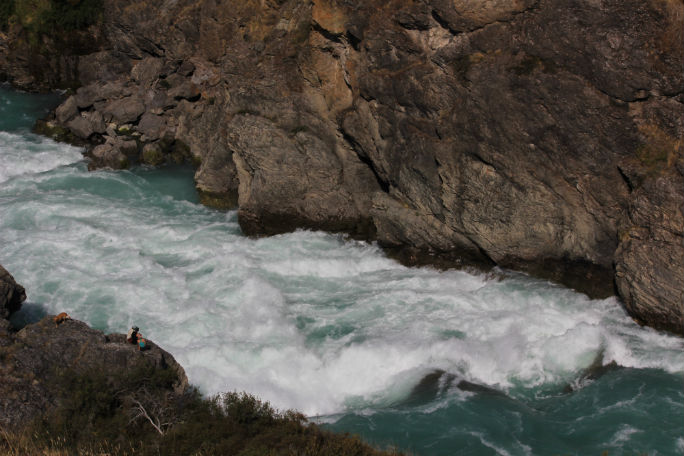 Living in the small pueblo of Futaleufú offered me ample opportunity to get to know this treasure of whitewater and fall in love with it, riffle by riffle, and the community that relies on it. Leaving my wood-fired shack as dew evaporated into the early morning air, I could walk down to the river with a kayak on my shoulder, paddle over 40km to the bottom of the final rapid, and hitch a ride back to my little ramshackle in the back of an oxen truck. To date, I have spent over eight months in that valley, and I paddled every day that I could. Unbeknownst to me, while on my last stint in Futaleufú, I was training to be a Futa Fest photographer. 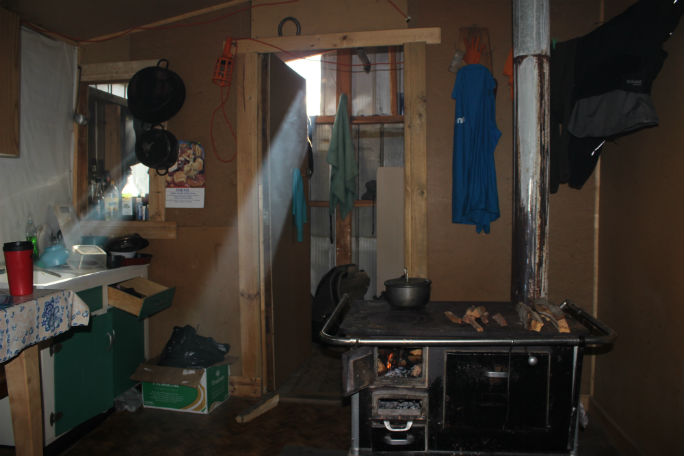 The multi-day festivities range from beat-down-drag-out-boater-cross racing to promoting community involvement by floating families and friends down the mellow class II sections with local Chilean guides. Fidgety kayakers line the starting beach on day one, the true kickoff to Futa Fest. Paddlers wait to sprint and leap into flying aerial corkscrews that will hopefully land them in the cockpits of their boats perched on the shore. This jolt of excitement is the culmination of an event that has been growing for years.

It was my job during races to break away and paddle into the packs of racers before edging back to shore, sprinting to the top of boulders to pop off a few more shots, and hop into an escape vehicle waiting to speed me to various finish lines and events throughout the weekend.

As racers round the bend or competitors link freestyle tricks together one after another, they’re greeted and cheered by hoots and whistles from locals, and if they’re lucky, their own personal  fan clubs of stormy-eyed Chilean women. The stoke continues throughout the festival. Spectators line the riverbank to watch some of the best athletes in the sport compete in Giant Slalom, Freestyle, boater-cross and raft racing. A culmination of tests that define what it means to truly be a well-rounded whitewater competitor. 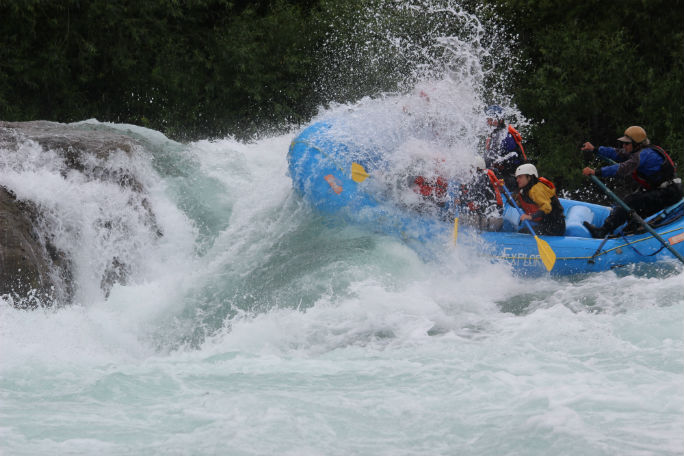 The evenings keep close to the river’s edge, just out of stumbling distance, but well within earshot of ‘Cara Del Indio’ Rapid. Freshly slaughtered lambs roast on spits next to open flame as dripping grease sizzles onto a hot bed of coals. Asados are a classic Chilean affair. Sheep that have been slow-roasting on vertical spits all day are thrown down upon bare wood-plank-tables. The aroma brings every carnivorous individual, with knife in hand, salivating to the table. An alternative to family-style dining, everyone slices their proffered cuts from bone. As the feeding frenzies subside, paddlers laugh and mime exaggerated recollections from the day’s events. A liberal amount of Spicoli-esque banter rattles through the glowing faces.

Day two: paddlers shake off the evening’s shenanigans as they climb to the top of a 15-foot ramp compiled of downed trees and spare plywood. The blow-horn sits next to their head and a two-way radio buzzes. The horn bellows. While plastic is grinding down wood, all I can think is how I’m about to capture a photo of one of those special moments when someone gets their spinal column severed doing something ridiculous. 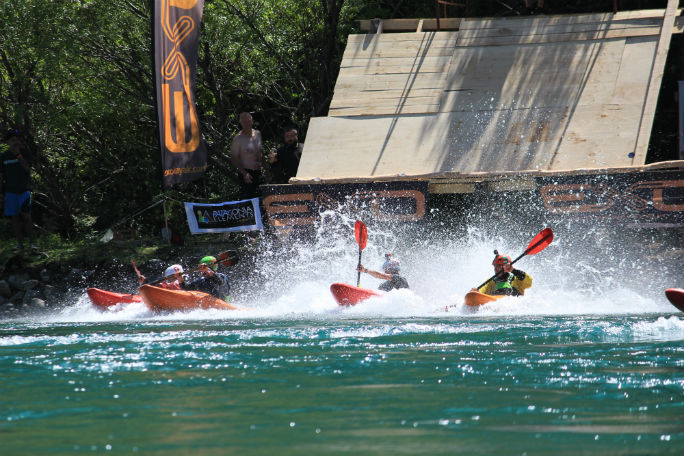 All spines stay intact and racers compete head to head until the festival’s competitions slowly come to an end and the field is whittled down. The overall winner of the event is awarded an invitation into the famed whitewater grand-prix, held in different locations dependent on high flows, insane rapids and big freestyle waves. The Futa is a proving ground, but in the end, the true winners are those that participated in any way—volunteers, racers, race-coordinators, spectators, etc. Everyone is invited to the awards ceremony.

Awards, from sponsors located all over the world, are handed out to winners of individual events and overall point holders. A laser-filled discoteca fiesta ensues at the small community center. People that are typically accustomed to only moving their hips while rolling a kayak, give it the old college try, often only to be embarrassed by watching anyone of Latin descent move their body. (An incredible people-watching opportunity.) As dawn light crests the horizon of the Andes, hopefully everyone finds their way into a sleeping bag somewhere within walking distance of the sweaty dance floor. 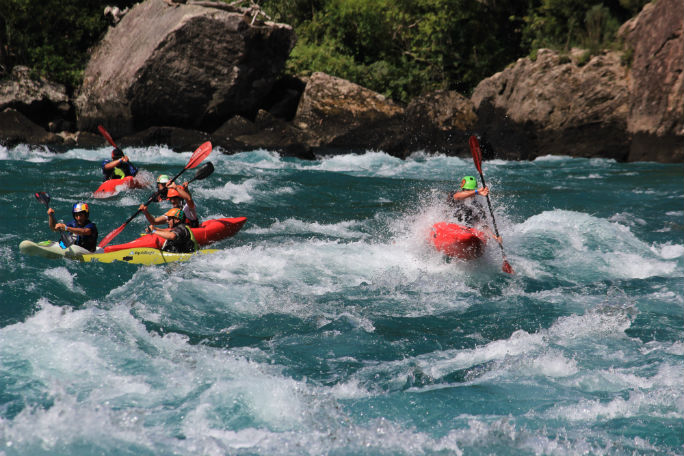 For some, the Rio Futaleufú is the apex of their paddling career. For others, a testing ground for what may come, especially if future endeavors move them farther south, where the real Chilean beasts lie. In the days and weeks to follow, the dirtbag population fades away back to a reasonable sample of guides and seasonal fun-hogs like yours truly. Some even make way farther south, closer to the Antarctic, away from any resemblance of the world that most of us have grown comfortable in. Closer to the true definition of wild.

Despite many ongoing attempts by energy corporations to dam this incredible piece of river, the Futaleufú continues to offer itself as an immense playground to those willing to be embraced by its crushing power and to love it.

The Rio Futaleufú runs wild through the steep canyons of the Chilean Andes and cuts endlessly into the massive boulders in its river bed as it was meant to. Its relentless current tugs at the hearts and souls of those that kayak, raft or flyfish amongst its waters. And, hopefully, year after year, whitewater enthusiasts, vagabonds, gypsies, and the like from around the world, will flock to it in order to challenge themselves in its rapids and enjoy its magic amongst a growing community of friends. 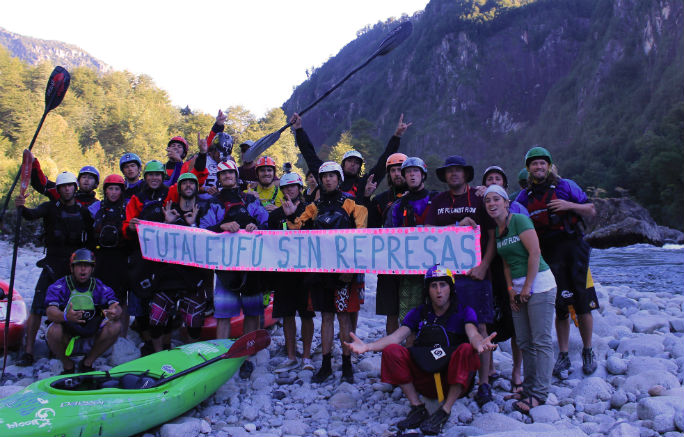