It was a spring of guiding, tortilla PB&Js, and kayaking. When a couple fellow guides asked Smitty to show them some backyard runs, Lolo Creek was the place to go. What started off as a smooth afternoon run turned into a 12-hour sufferfest, reminding Smitty even your most favorite runs demand respect.

When you’re learning to paddle there are sections of whitewater that you love from the day you set off into its currents. It doesn’t matter how amazing of a boater you may become in years to follow; it doesn’t matter how far you may travel from home, there will always be a hometown run, a backyard creek, that will hold a special place in your heart. With that affection comes stories. Stories of bruises and bumps, scars and close calls, triumphs and failures. 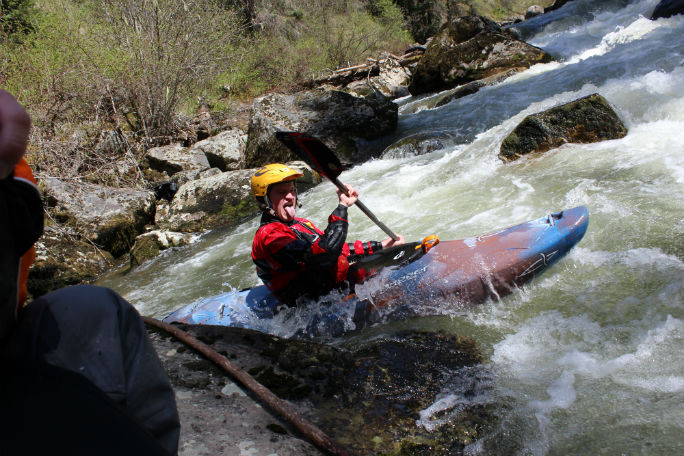 Located in the depths of the Weippe (We-ype) Prairie lies such a section of whitewater for me: Lolo Creek. Flowing from a high prairie that brushes the Selway Bitterroot Wilderness, Lolo Creek is a tributary of Idaho’s Clearwater River. It has taught me, if you let your guard down, a backyard run can quickly become a backyard epic.

Working as a guide in the Lochsa drainage, just 39 miles from the outlet of Lolo Creek, I had quick access to some of the state’s best whitewater. I spent all spring sleeping in a tent posted up in a mud pit. It was a pre-requisite for tapping into the goods. Dan, a fellow guide and paddling buddy was my go-to adventure partner that spring. I was a mediocre paddler at this point in my whitewater career and had been through some laughable situations with Dan. He was a keeper.

That spring, we worked hard for two days a week and spent the other five living off of tortellini and tortilla PB&J’s and kayaking. We constantly returned from daily outings on obscure creeks and tributaries to the intrigue of three fellow guides. Soon, they were eager to paddle something besides the voluminous Lochsa. Dan and I thought Lolo Creek would be the perfect place to take them. (In full disclosure, two of them were beautiful women and we were more than willing to organize any way to spend more time with them.) 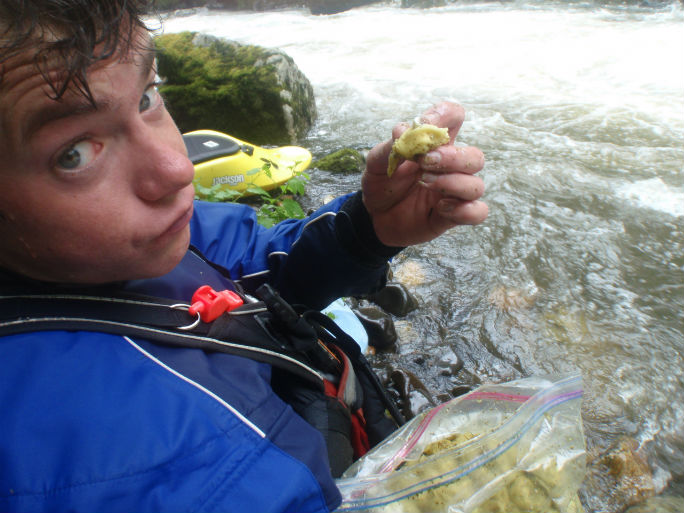 A slow start set us up for an early afternoon put-in, roughly 2:30 pm. But we were confident it would only take three hours. The water was low, and Dan and I had volunteered to lend our creek boats out to the others, thinking playboating would spice it up a class at this low flow.

As Dan and I ticked off each rapid that was significant at higher flows with little issue, we felt pretty sure that our course location for “Intro To Creeking” was on the money.

Recovering from the one course hiccup—a swimmer, a broached boat, a lost paddle and a pair of my borrowed mitts floating downstream—we scarfed candy bars and frolicked in a grassy field throwing a Frisbee. We were halfway down the 12.4 mile run, with only one last significant rapid before it was home free, back to the land of all-you-can-eat-tortellini. 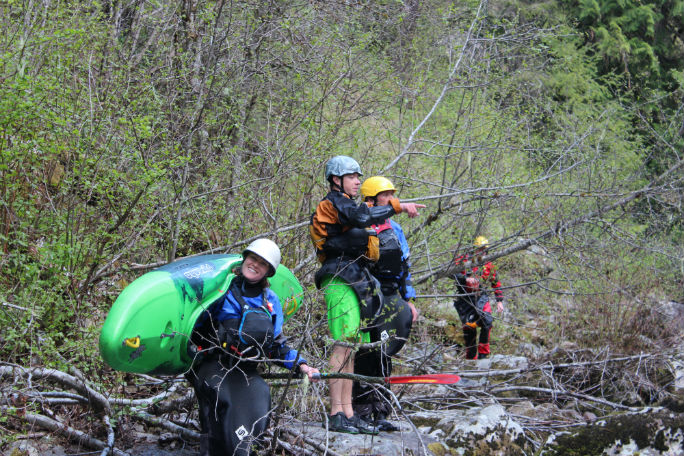 Floating above the “Schmits,” the steepest section of Lolo creek, Dan and I blabbed out beta over the loud buzz of water smashing into rocks and logs.

“Catch that eddy, ferry right to that other eddy, then ferry back to river left, etc, etc. Oh yeah, be sure to make eye contact before the next person goes and only one at a time.” The last part of my message was garbled and faded as I slipped out of the ‘Little Schmidt’ eddy to start slaloming my way down to the best spot to portage ‘Big Schmidt.’ However, sitting unobtrusively below the first eddy I had pointed out, was a sieve that had gone unnoticed at higher flows. I had grown so comfortable running this section of whitewater, and was most likely lost in the attentive gaze of one of the beautiful girl’s green eyes, that I had begun to narrow my awareness of significant hazards.

Soon I was chasing ole green eyes down the river as she cursed my name aloud. Seeing me peel out downstream, Kip, jetted out excitedly in hot pursuit. Now, I was chasing one inexperienced paddler (that I had a huge crush on) downstream toward a logjam, as the least experienced paddler was intent on catching up to me. This was turning into, as they say, a Charley-Foxtrot. 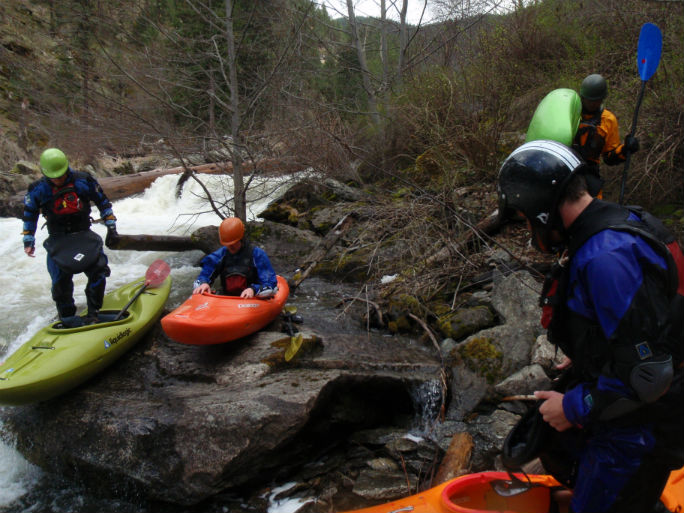 Disaster averted, the three of us settled into an eddy above the logjam. As I wiped the figurative sweat from my brow in relief, I heard the high-pitched whistle blasts of a boater saying, “Shit has hit the fan!”

My blood pressure shot through the roof; I popped my sprayskirt and parkour’ed over boulders, throwbag at ready, to the entrance move of Little Schmidt. Dan, red faced and holding the shoulders of his life jacket like a farmer trying to figure out how to extract a tractor sunken to its axels in mud, was staring down at the sieve I had failed to notice earlier. The blonde bombshell was sitting on shore looking pale as a ghost.

Miscommunication had resulted in her slipping out the back of the eddy and becoming trapped in a channel of water that fed directly under two large boulders. The river reappeared after eight feet of subterranean travel through a slot that would never have fit a human and a kayak. I was nearly sick after realizing what had just occurred. With quick thinking, Dan had ejected from his boat, gotten his hand on Ms. Bombshell and wrenched her out of the sieve, after she had miraculously disappeared into the death slot and extricated herself back upstream with super-woman strength.

Apparently, our choice site for “Creeking 101” came with a few upper-level extra-credit moves. (In hindsight, we probably should have avoided this altogether.) This became doubly apparent once I was lowered into the sieve as live bait. We proceeded to strip the sheath on a 2500 pound test rope with a five-person z-drag and not budge the kayak in question. The sun was dropping quickly and we had a better chance of tearing this boat in half than extracting it. Lolo Creek, our backyard fun-run was kicking our asses and we knew it. 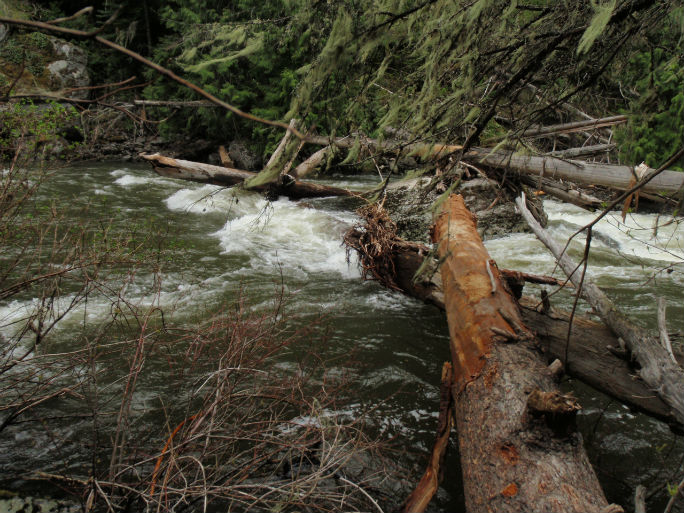 I knew this creek and I hadn’t been stuck in sieves, so I volunteered to hike to the take-out.  I collected the essentials, including an ‘Oh Shit kit’ (extra light and waterproof matches), handed off what equipment would slow me down, sprayskirt and pfd—who needs that when you’re bushwhacking?—and headed out for the four-mile trek. How long could it take?

The Lolo creek drainage is beautiful, complete with large green ferns, old growth cedars, and moss covered rocks. And then there’s lush hillsides that are quick to pull away under foot, blackberry bushes with razor sharp thorns, mildewed deer skulls with fresh mountain lion gnaw marks and steep, steep banks. Yeah it’s beautiful, albeit not a commonly hiked piece of the Inland Northwest. 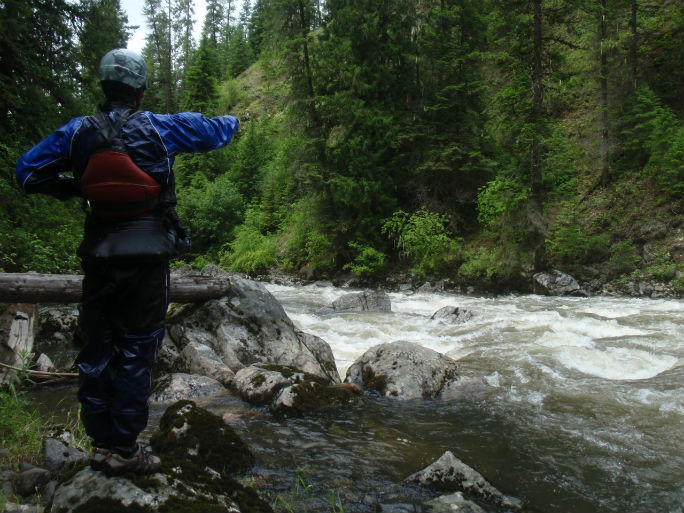 After downstream travel on the left bank became futile, I blew up my dry-suit and tried floating a couple of small rapids. (Read: left my PFD behind.) After being reminded by my tailbone that it was low water, I exited to river right. The sun disappeared behind the hills and here I was wading through a thicket of blackberry bushes with an empty Nalgene, the stomach cramps of dehydration setting in, and no food. Climbing 2000 vertical feet in the dark to the top of the prairie was going to be the only way out of this gorgeous hellhole. To top it off, I cracked open the kit to grab that cheap light, and its batteries were dead.

Damnit, Dan and I had just wanted to have a nice mellow day on our favorite backyard creek with some pretty ladies (and Kip). This wasn’t what I had in mind. Talking myself down from a panic-attacks as every third step slid backwards, I pushed uphill with leg cramps. ”This is how it happens,” I thought to myself. “This is how those idiots you hear about in the news die just a couple miles from civilization. I’m now one of those idiots!”

At one point I stumbled into a puddle of muddy water and quickly ingested as much as I could before projectile-vomiting most of it up. Thinking that a fire might be a good idea, I soon learned that the matches wouldn’t strike anything. Wonderful. 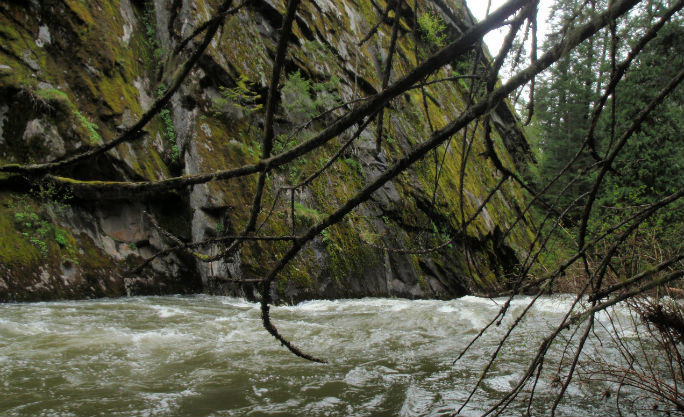 One after another, false horizon lines faded away until the lights of the agricultural prairie finally appeared. Bloody and torn, I trudged to the main road through ankle deep fields of mud in my drysuit to wave down some locals on their way to a bar. Boasting only ten teeth combined, they made it apparent that A) I was the one that looked like the freak, and B) they definitely didn’t have time to give me a ride six miles down the road to the takeout bridge. “No can do man. We got places ta be.” My jaw dropped when the driver said “Just hump it man. It’s only like four more miles.”

I wanted to punch him in the face. I wanted to throw a rock through the windshield. I didn’t, however, want to get stabbed with a dull hunting-knife and left in a field after working so hard to escape Lolo Creek. So, slowly—whining, sulking and livid—I trudged on.

I’ve traveled through some hairy places in my past and found myself, more than once, in brutal situations around the world. But the struggle I was enduring, so close to home, had surpassed (and would continue to surpass) all past and future screw ups. That small backyard run I had come to love showed me it had no love for anyone, and it should be respected just like any other section of whitewater. I took a lot of knowledge away from that endeavor and realized that the saying “Fail to prepare, prepare to fail” has some definite weight behind it. (And pack a solid ‘Oh Shit Kit” for gods sake!)

When I started this little endeavor it was just past seven in the evening. By now it was nearing two am. Who knew if my friends were even still waiting for me? Unbeknownst to me, as I hopped into that second passing truck, my friends were sitting at the take-out, having kayaked the rest of the way, trying to decide my fate. As the headlights swept over their nervous eyes, I fell out of the passenger’s side door in a crumpled mess. “That was the craziest nature hike I’ve had so far,” I said. 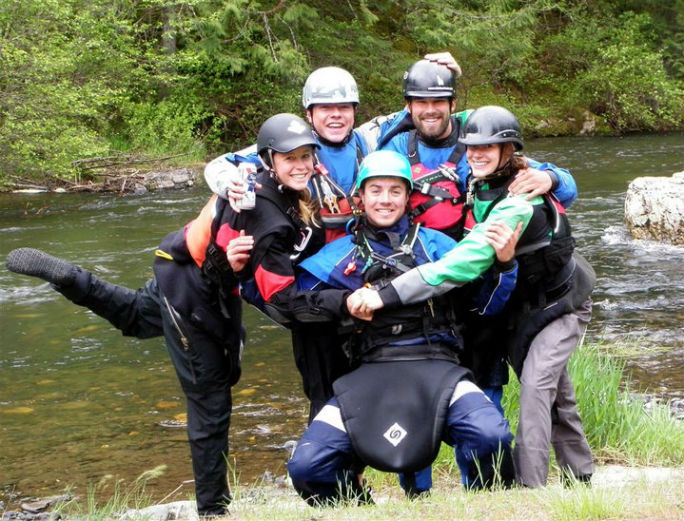