Safety Sally on the Stikine

I kneeled in the current, placed hands on milky cobbles. Black spruce leaned over the banks, trunks arched back toward the sun as if straining away from collapse into the river. I, on the other hand, was hungry for it: I bent my elbows into the clear, green water, let my chest slip beneath, then neck, then head. I pressed upward again, gasping and sputtering, wiping mud from my skin. The chill made me stagger as I splashed free—the rivers of northern British Columbia stay pretty brisk, even in early August. Once on shore, I flopped into a camp chair and splayed my arms and legs wide to the sun like a human solar panel. 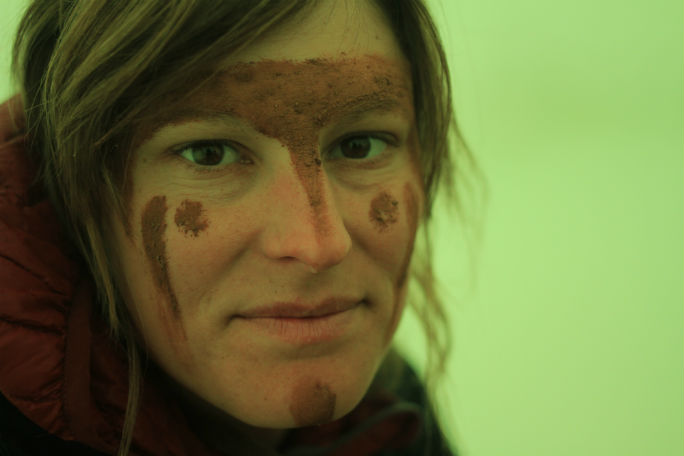 Moments earlier my five companions and I had been hurling fistfuls of muck pulled from the water line, not far from where our three canoes propped upside down over a fallen log. Krista started it: “Hey Kate! Come check this out!” She had called, bending over some dwarf fireweed. Then, the ambush. Splat. Face-splat. Chest-splat. Anna painted a smiley face on her belly. Jen stood in the water and washed silt from Kate’s hair. 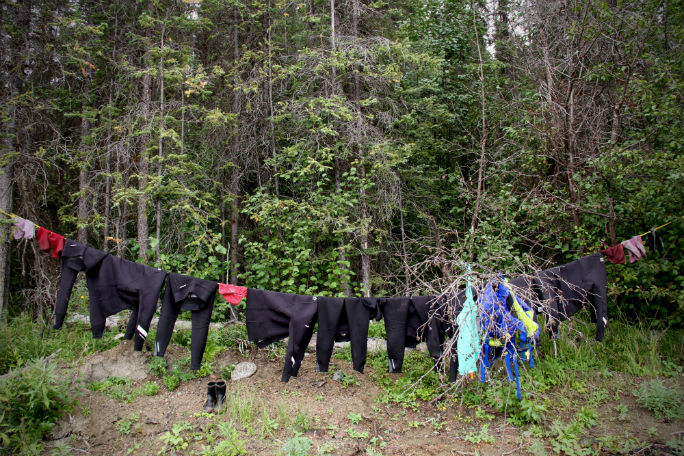 We were several days into an all-women’s paddling trip down the Spatsizi River, soon to merge with the much broader Upper Stikine. And we were, most of us, completely bare, arrayed around the fire ring sipping beer and scribbling in journals. When I peered over my book at the others, I was struck by their ease in their own skin, despite vulnerability to the elements, and to each other. Their attention was turned inward, their eyes rising occasionally to survey the spread of forest and craggy mountains rising beyond. I felt it too: my body unclenched like a loosened fist, palm up, receiving the gift that was this waning afternoon. 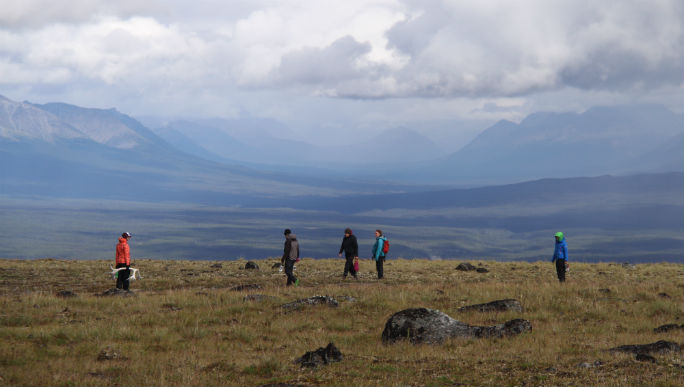 If there’s one thing women get a lot in our day-to-day lives, it’s unwanted feedback on all the things we should be, and all the ways we are not good enough. We are too fat or too thin. We are too eager to speak or too meek. Too prude or too promiscuous. We are measured in thigh gap and cup size. Our solitude is interpreted as an invitation to comment or touch. Despite the wins of feminist struggles past, we still grapple with gender pay disparities and flail against glass ceilings. 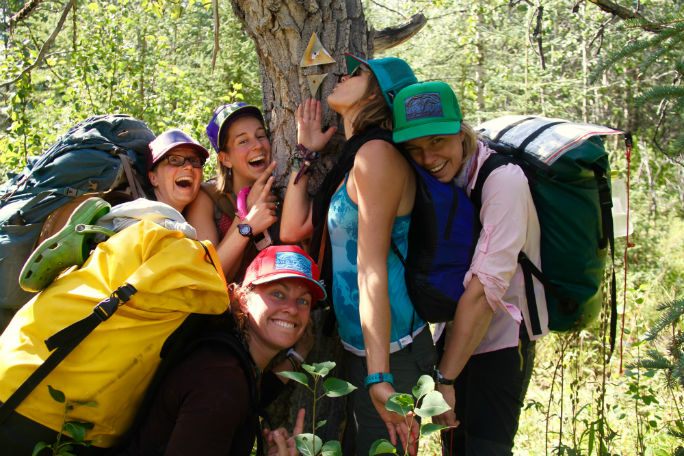 Here, though, all that mattered was mac ‘n’ cheese and the elegance of our J-strokes, the way we rocked our mullet wigs and brash onesies, and how willing we were just to try—bushwhacking up an insanely overgrown and ponded creek, struggling with the unfamiliar fly rods we had brought. Here in this valley of grizzly tracks the size of platters, here in these forbidding woods full of grunts, rustles, and mossed-over animal skulls, here on this river of strainers and mysterious splashes, I felt…safe. 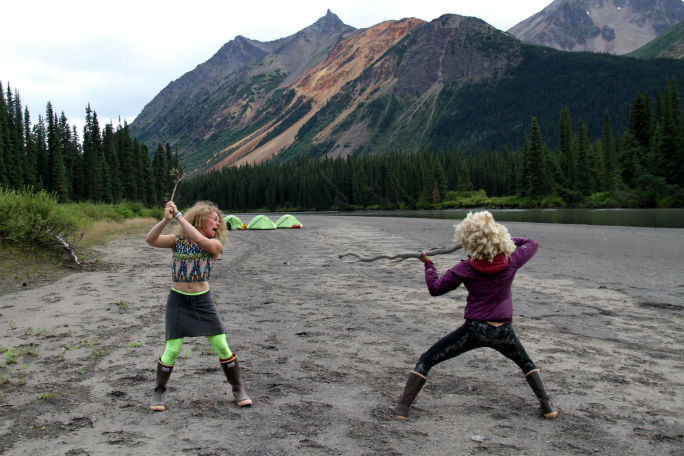 And not just from the invasion of society’s expectations, but from the sense of having to prove something on behalf of my gender. For me, the machismo and one-upmanship I see in extreme sports culture can color even the most mellow trips, creating a sort of insidious reverse sexism that’s hard for me to inhabit.

Outdoorswomen are fearless! Outdoorswomen push the limits of what’s humanly possible! I want to be strong, and I am, in fact, an unusually strong woman, a six-footer who wins wood-splitting contests and can carry five or six little kids around at a jog during a good game of chase-and-tackle. But as much as I love the deep wilds, I’m no extreme athlete. I’m Safety Sally. And in the company of those who celebrate the shred-and-gnar, I sometimes feel like a failure to womankind. 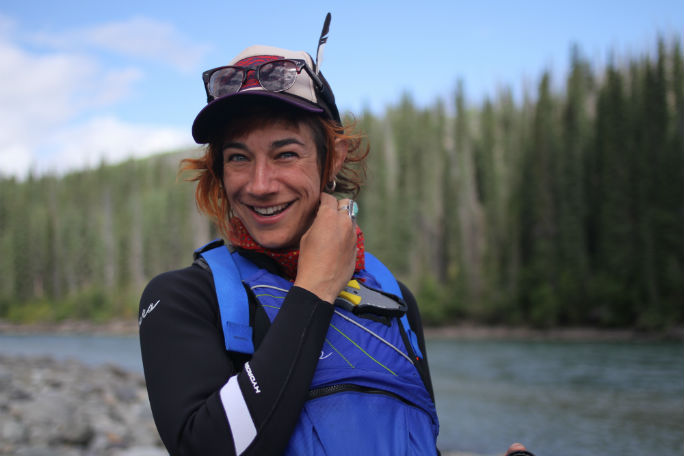 A few years prior to our canoe trip, a dear friend had asked me to accompany him and three other men across an Alaskan ice field. The trip was revelatory. We watched wolverines chase each other between crevasses. We skied across a bowl of snow so blinding and unbroken and sweet that it made me want to yell, and I did. But as the least experienced, the most cautious, and the only woman, my need to prove myself ground hard against my fears. I weaved between biting my tongue when I felt unsure and trying to voice my concerns without coming off as a wimp. As much as I loved the place and my companions, tension ran through me top to bottom like a hot, tight wire, and didn’t release until we were back on solid ground. 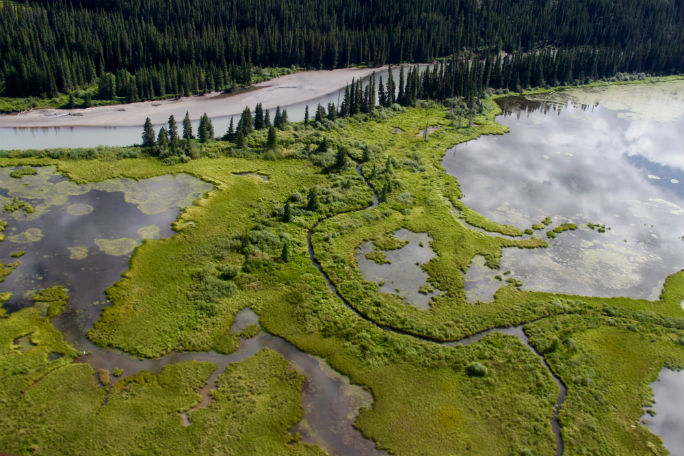 I don’t blame my male companions. The tension came from something beyond them—from the stories the world tells about men and women, the ones that set our expectations for what those words are supposed to mean, and who we are supposed to be inside of the boundaries of their definitions. But as I made my way down the Spatz and Stikine in the company of only women, I noticed that the tension never came. 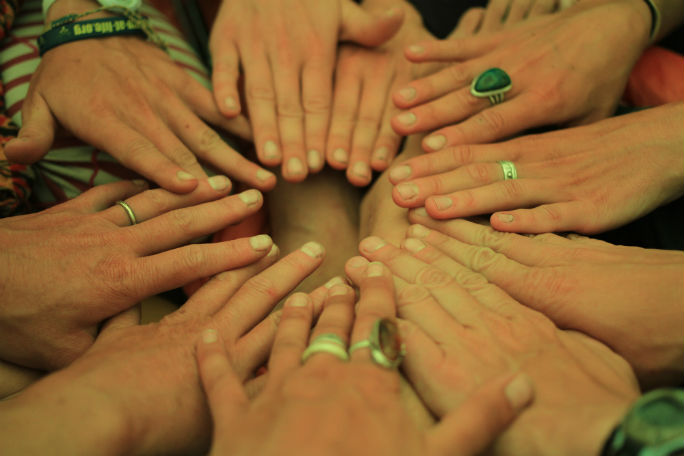 The need to prove anything about myself gave way to unselfconsciousness—not just about my body, but about my skill level on the water. When I was uncomfortable or didn’t agree, I said it without trepidation or second thought. My companions listened. I listened to them. And the trip gave me something I don’t think I could have gotten elsewhere—the assurance, perhaps, that if I let go of judging myself, it won’t matter who I travel the wilds with. 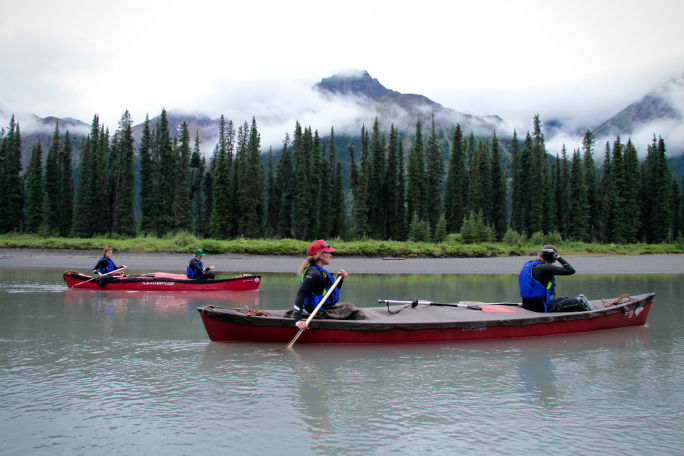 On the last day of our journey on the Upper Stikine, we came upon a rapid we had failed to note on the map. It was Class II+, significant for this river. The group conferred, agreed not to scout it. Then Anna decided she wanted to try paddling it in the stern, and we changed our course as easily as we had set it. Eddying out, we hopped down the shore on the rocks, munching energy bars, pointing out possible lines. The upstream wind was freezing, the water, ominously slate gray with rain-sluiced silt. 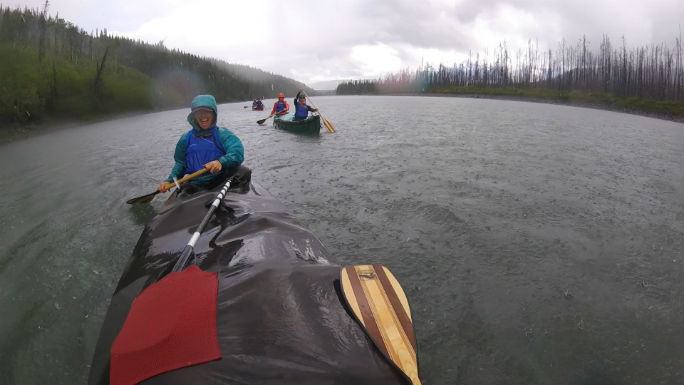 We piled back under our spray decks and pushed off, one by one, into the current. I pulled in the bow of the canoe of my boat, while Kate steered beautifully in the stern. Toothy boulders and pour overs slipped by on right and left. One of the canoes nearly swamped in a hole. And in the slack water below, we lifted our paddles to the cloudy sky and cheered. 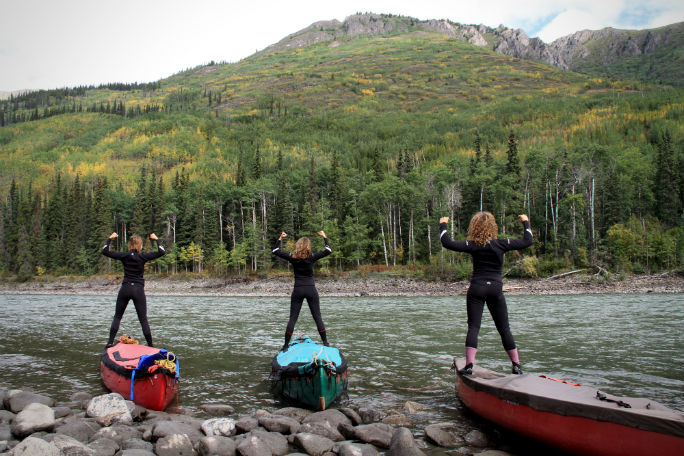