Finding Balance in a Place of Extremes

The Arctic is a place of extremes—hot or cold, windy or buggy, sunny or snowing, continuous daylight or complete darkness. This was my second extended canoe trip to the far north. Two years ago we paddled the Back River through the Barrenlands region of Arctic Canada. The Back was a long and difficult trip in and of itself, but it was especially severe because we didn’t bring enough food. We rationed and fished, lost weight and survived, but that was a mistake I didn’t want to repeat. This time, my husband and I planned a 26-day trip on the Horton River in Canada’s Northwest Territories. We thought we had achieved the perfect balance between a long, strenuous, and logistically complicated expedition and a straight forward paddling trip. It was just the two of us, so our group dynamics would be predictable (we actually get along very well in the wilderness), and we packed enough food. Balance, however, is a hard thing to achieve in the Arctic. 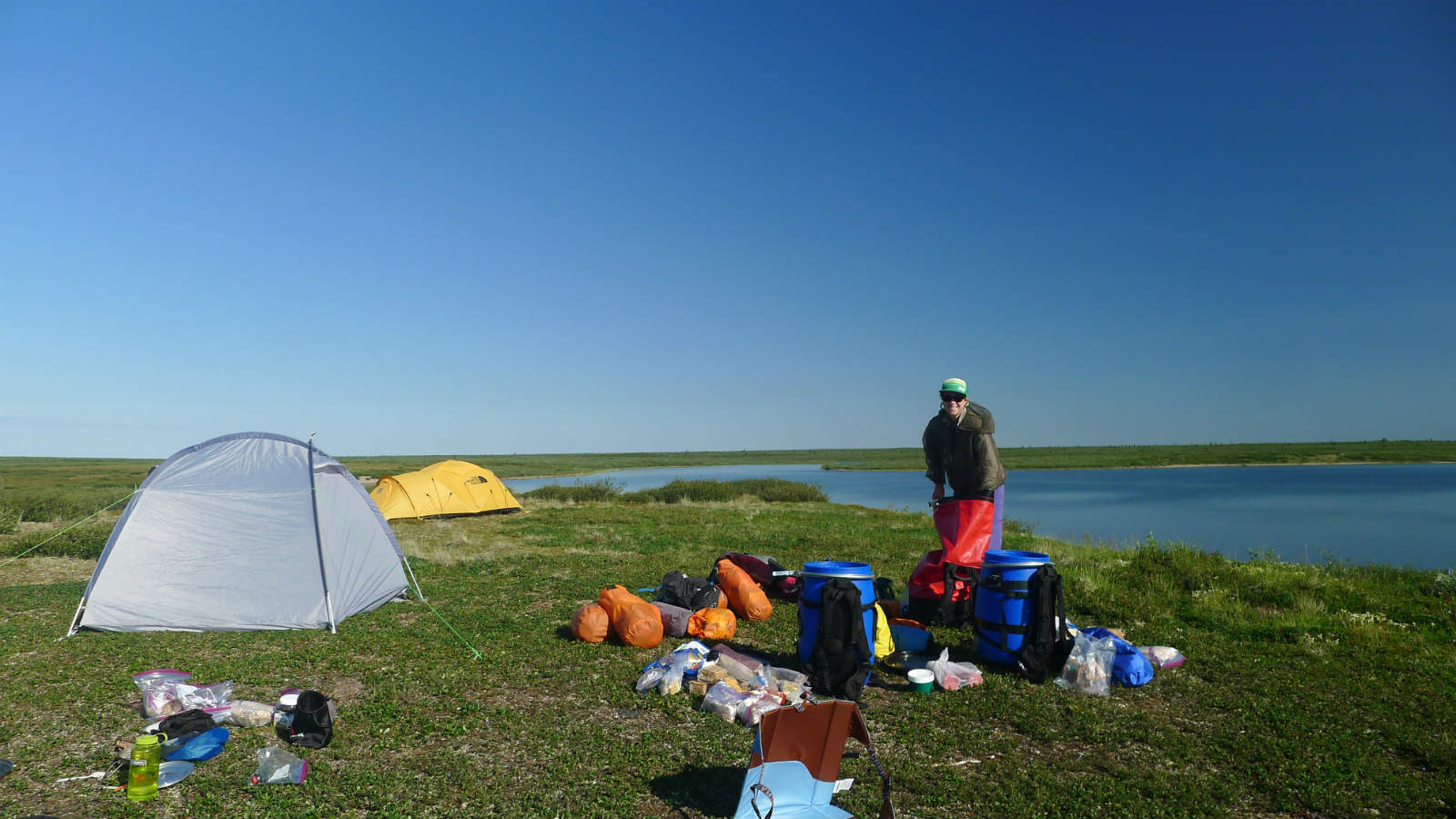 We chose the Horton namely for its beauty, but also because it doesn’t have any lake crossings or long portages. It’s located in an arctic desert, so the weather is usually dry, another plus. We thought it would be the perfect single boat trip—easy enough to make miles and still have time to hike and fish, but challenging enough to not get boring. For the first week, the Horton was all of these things, but I soon realized arctic adventures are way more interesting when they’re extreme. At the start the air was hot, the skies clear, the wind still, the sun never sank below the horizon, and the water was perfectly transparent. By the end of the trip we had endured arctic snowstorms and downpours, observed distinct changes in geology and plant communities, and watched with despair as the water changed from crystal clear to filthy with runoff from the naturally occurring coal deposits near the Arctic coast.

We chartered out of Inuvik, a small town on the Mackenzie River delta. We departed late in the afternoon on July 7th, and after a three-hour flight we landed on Horton Lake around 8 that evening. We assembled our Pak canoe and paddled across the lake to make camp. We cooked and ate our dinner close to midnight with the sun still blazing into our cramped bug tent. After spending six weeks on the Back, the tundra, the arctic light from the midnight sun, and even the bugs, felt like home. However, this trip and place were different, and the next day we left the lake and the tundra and descended down the river through an entirely different sequence of arctic ecosystems. 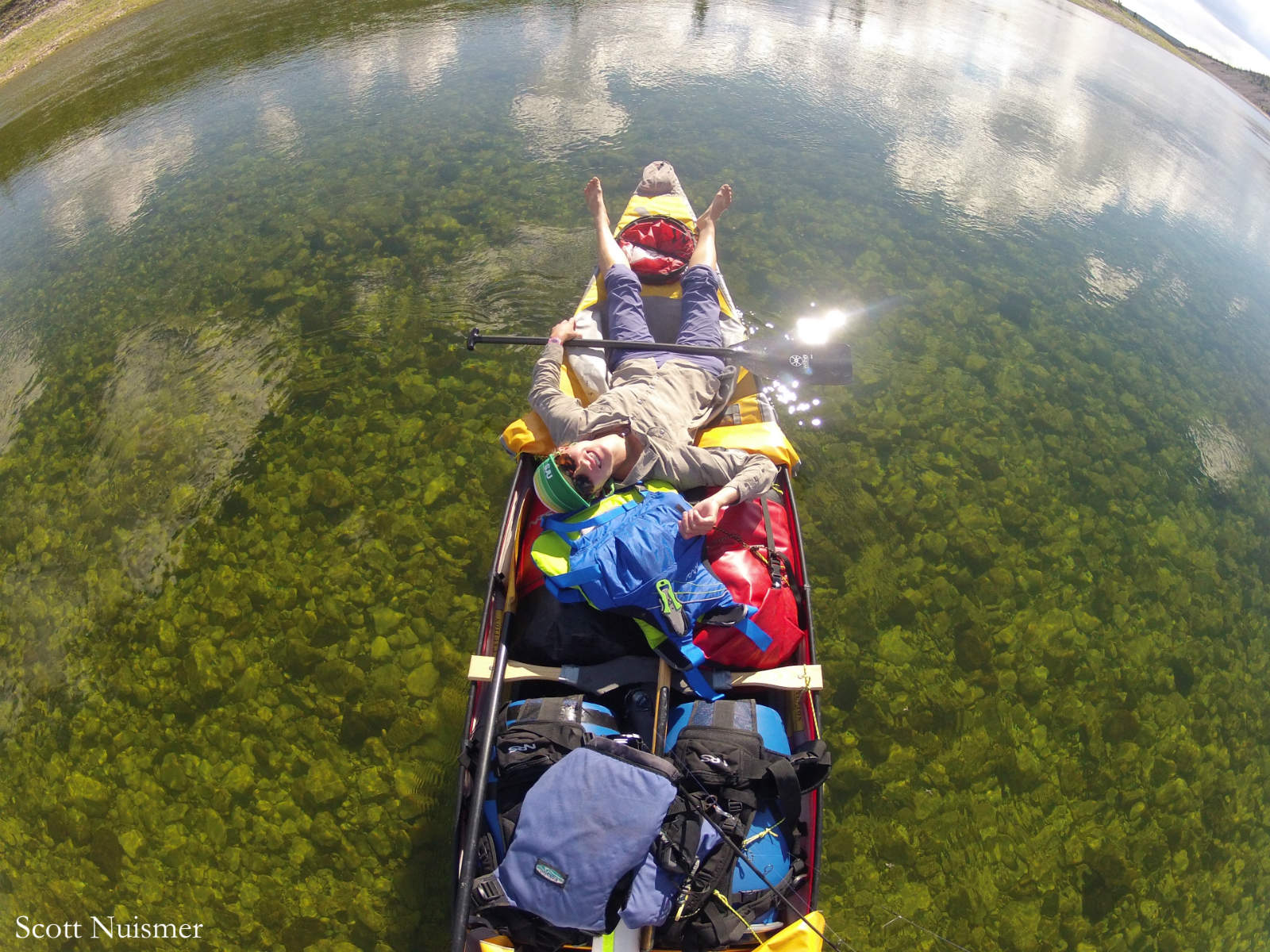 The upper canyon was hot and dry, and was indeed similar to a desert. The river was lined with rocky beaches and bare talus walls that resembled mountains. But scrambling to the top during our evening hikes revealed a flat, dry tundra plateau that stretched to infinity in all directions. We saw muskox wandering the tundra and they looked hot in their long thick coats. The weather was so warm, and the river was so placid, I worried I would get bored if the ease continued. With enough calories per day and readily making miles downstream, the trip was off to a luxurious beginning. We swam in the river every evening. I would dive down and open my eyes to look around in the most extraordinarily clear water I’ve ever seen. The summer season in the Arctic is short, however, and a midsummer storm can chill the river water as fast as the midnight sun can heat it up. As soon as I started to worry our trip would turn out to be too easy, the wind changed and a storm blew in from the north. Our sweaty hikes, evening swims, and making easy miles ended as the weather deteriorated, first to rain, then to snow. 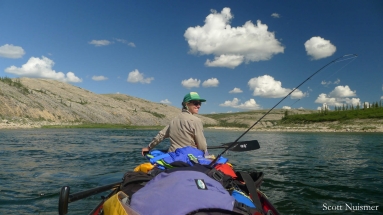 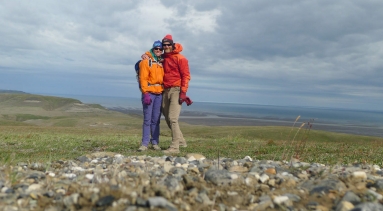 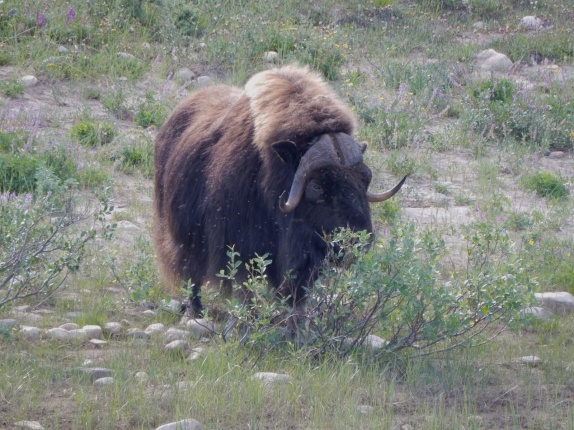 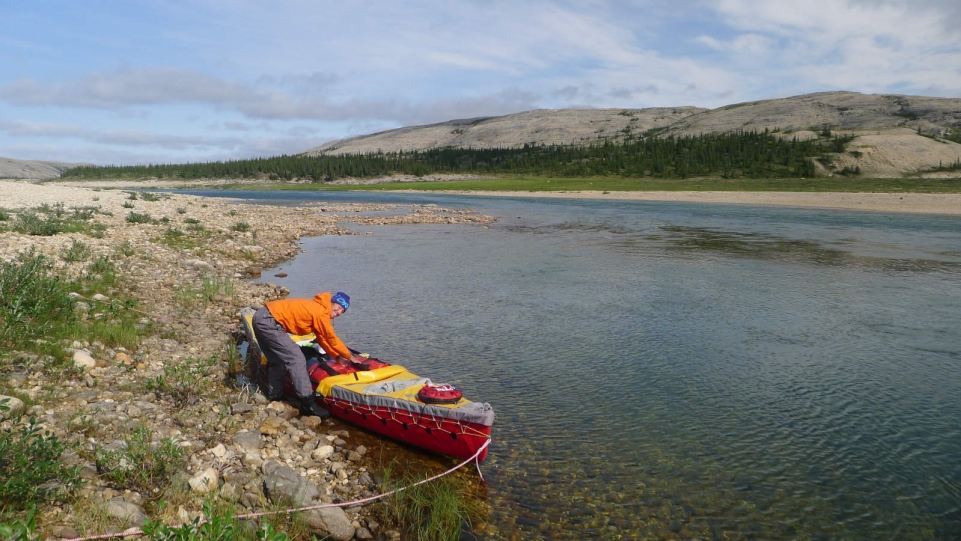 We were in between the first and second canyon, out on the tundra again when the storm hit. The wind howled across the exposed land whipping snow against our tent, and I was remorseful for taking the warm weather and easy living for granted. Waiting out a storm has moments of excitement, when you worry that your tent is going to blow apart or that a curious grizzly is going to saunter into camp. But that excitement is paired with hours of boredom, lying on your back staring at the tent ceiling. Although it was still snowing and frigid, two days later the storm eased up enough for us to launch and we entered into the second canyon section of the river.

The next canyon was more like a classical river canyon with gorged out walls, rock ledges, steep banks, and rapids. We had to wait for the intermittent snow squalls to stop so we could see to paddle. The water temperature had dropped from cool to glacial, and even though the rapids weren’t difficult, tipping over would be a life-threatening situation. Hypothermia would set in quickly, and on a trip with only one boat, there’s nobody else to help you get gear to shore and get warmed up. We lined one of the large ledge drops and portaged a drop that reminded me of Lochsa Falls in Idaho. Portaging was actually an enjoyable diversion, offering a chance to warm up and work out the kinks that we had accumulated after spending days tent bound by the storm. 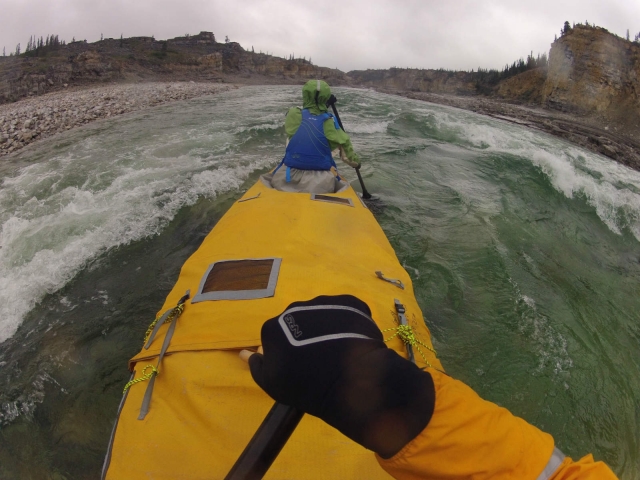 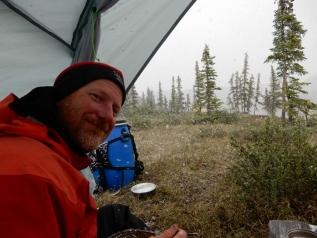 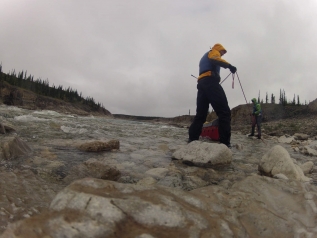 As the last of the rapids disappeared behind us, the weather improved and the snow squalls turned into intermittent rainstorms. The canyon petered out and the habitat changed. I no longer believed I was in an arctic desert. The steep canyon turned into towering walls of grey mud and hills of luscious green brush.

As we paddled on, I was faced with one of my greatest fears: bears. Willows thick enough to obscure any grizzly meandering up and down the drainage lined the riverbanks. We saw plenty of grizzly bear signs and, of course, actual bears (one sow even had four cubs!). I find grizzlies to be terrifying creatures and it’s a wonder they don’t eat us more often, but no bears harassed our camp and the individuals we encountered ran as soon as they smelled us. Nonetheless, grizzlies are intimidating. I had never appreciated traveling in a group, even a small group, in bear country until being only two people in this harsh wilderness. I felt vulnerable as a pair. We camped on gravel islands in the middle of the river to avoid the willow maze on the bank, but even the islands had signs of recent grizzly traffic. 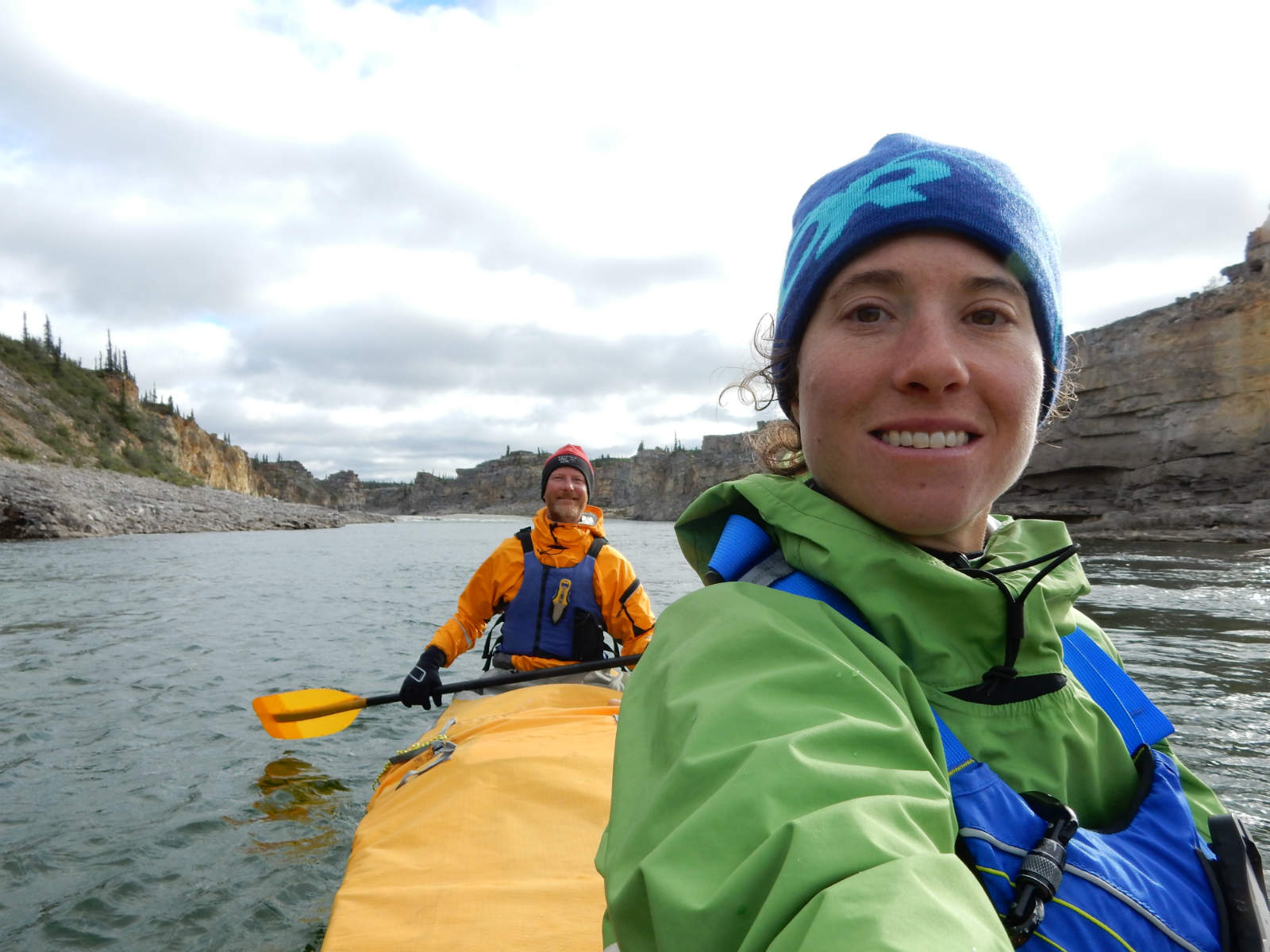 Avoiding grizzly bear corridors wasn’t our only challenge as we paddled north. It became difficult to find a place to camp, and most distressing, the clear water turned turbid and smelled of minerals and rotting organic matter. The riverbank was either greasy mud or steep gravel, and the mud only got worse. At a specific bend in the river, the crystal blue water became tarnished with black muck—so much for fishing. The river had eroded a huge portion of muddy cut-bank around a sweeping turn. It cut under the top layer of earth, leaving the trees and vegetation intact while abrading the under layers. The chasm it created reached back forty feet and smelled like decay. The rift initiated the deterioration in water quality, but it wasn’t the only contributor.

Erosion of the flat-lying Cretaceous shales, common near the Arctic coast, created side streams that drained coal sediment directly into the river. Erosion and huge landslides exposed coal and magnesium deposits that, as in a post-apocalyptic scene, would light on fire and smoke when the wind blew. Depending on the source, some of the side creeks were red and others were grey. When we came across a clear creek, we reveled in the thoughts of fresh water, but our enthusiasm was short-lived once we realized it smelled and tasted like petroleum. Ultimately, there was nothing to do but drink from the river, figuring it was the most dilute water source around. 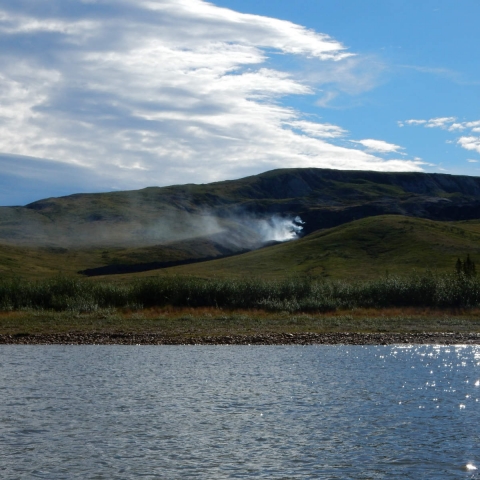 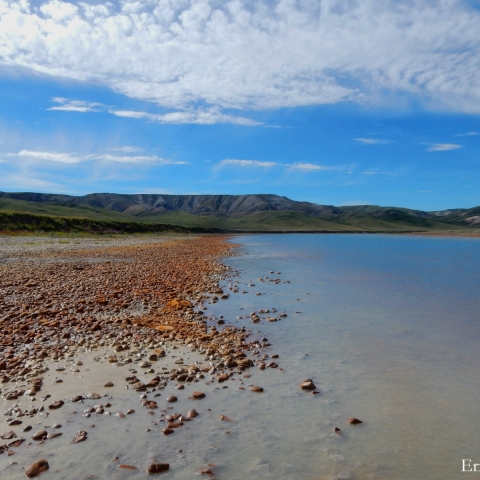 Finally, after 25 days and in the middle of a downpour, we reached our endpoint. Out in the distance we could see the last of the river channel, the vast openness of the Arctic Ocean, and the bright white of the pack ice floating in Franklin Bay on the Beaufort Sea. Yet this forsaken, desolate land, with it’s tarnished water and smoking cliffs, still generated a healthy tundra ecosystem. We saw a grizzly bear, muskox, and caribou foraging on the tundra hills above the river. The view of the pack ice and icebergs bobbing in the ocean was breathtaking. Seeing the pack ice made me want to come back again and explore the islands farther north—to try another strenuous arctic trip with no expectation of balance. 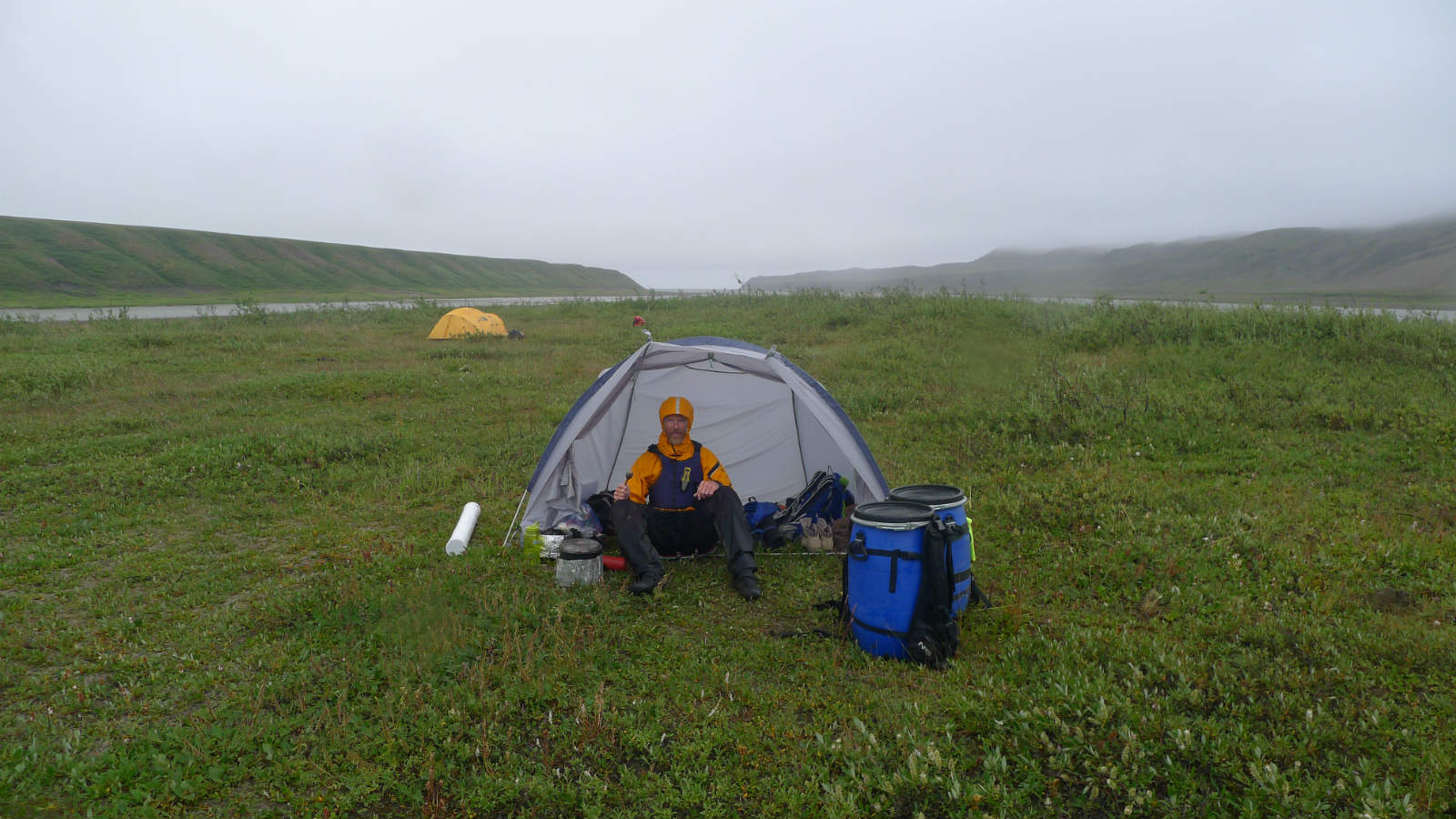 We spent two days camped on an island in the middle of the river just upstream of the mouth, until the weather cleared and our bush pilot was able to land the Cessna 206 right on the river. We loaded up and flew the 300 km back to Inuvik, but re-entry into civilization was a let down. We hadn’t starved sufficiently to be overjoyed with the opportunity to eat copious amounts of food, and we missed our daily routine with just the two of us out on the tundra. After a safe return, I sometimes wish the trip had been more extreme. 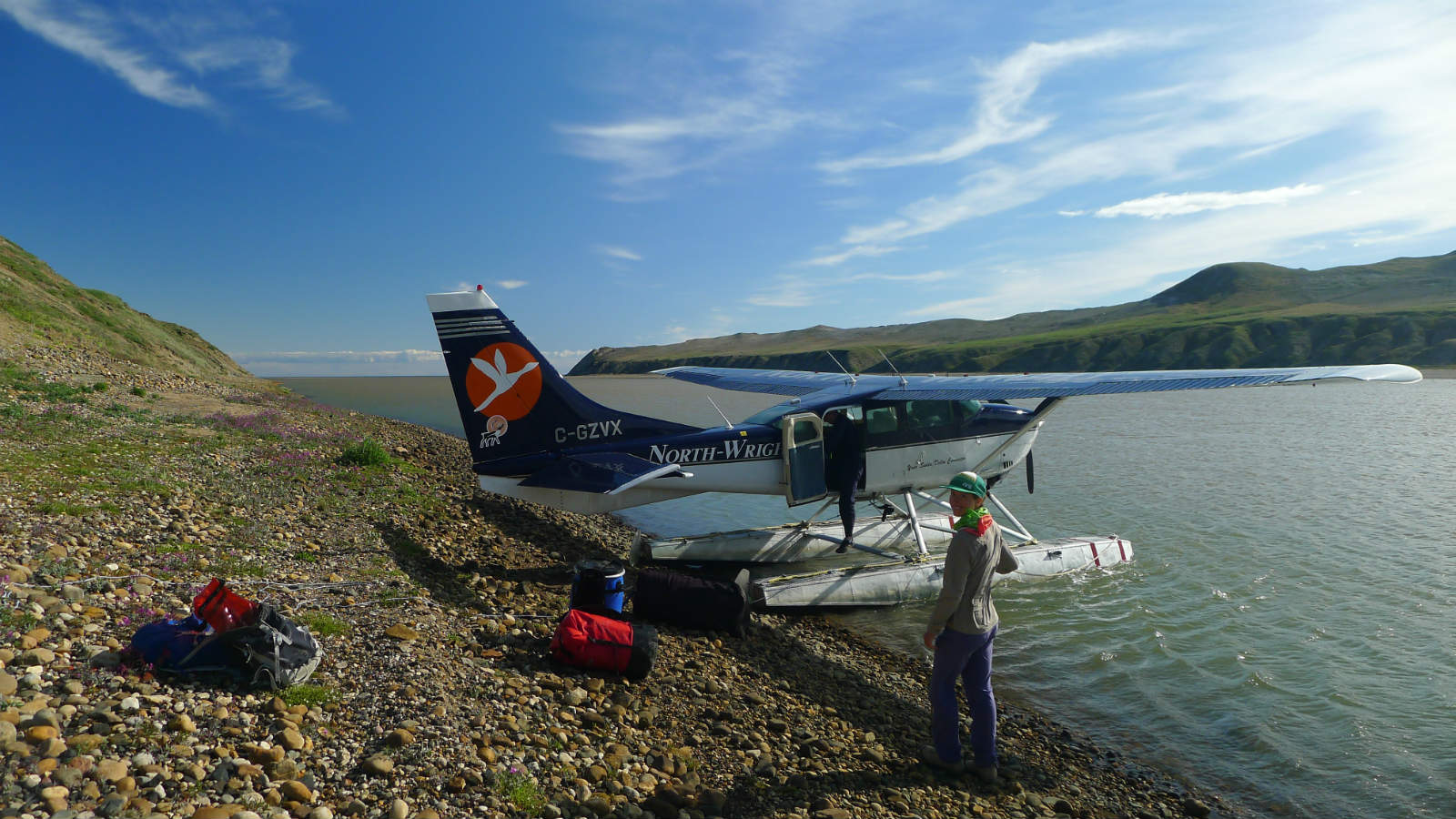