Jay Mahan is the kind of guy who dreams big. When I first met Jay at a reggae show along the Kenai River in Alaska we talked about a couple of his past whitewater kayaking adventures. I was immediately fascinated. He told stories of pushing the high water limits on classic Southeast runs like Linville Gorge and of exploring seldom-seen rivers in southern Ecuador. This dude was a go-getter and had quickly progressed as a whitewater paddler. But it wasn’t until we talked about flying that Jay’s true passion came to light. Now, hung up on the thought of Alaska’s vast mountainous skies, a spark flickered in Jay’s eyes. 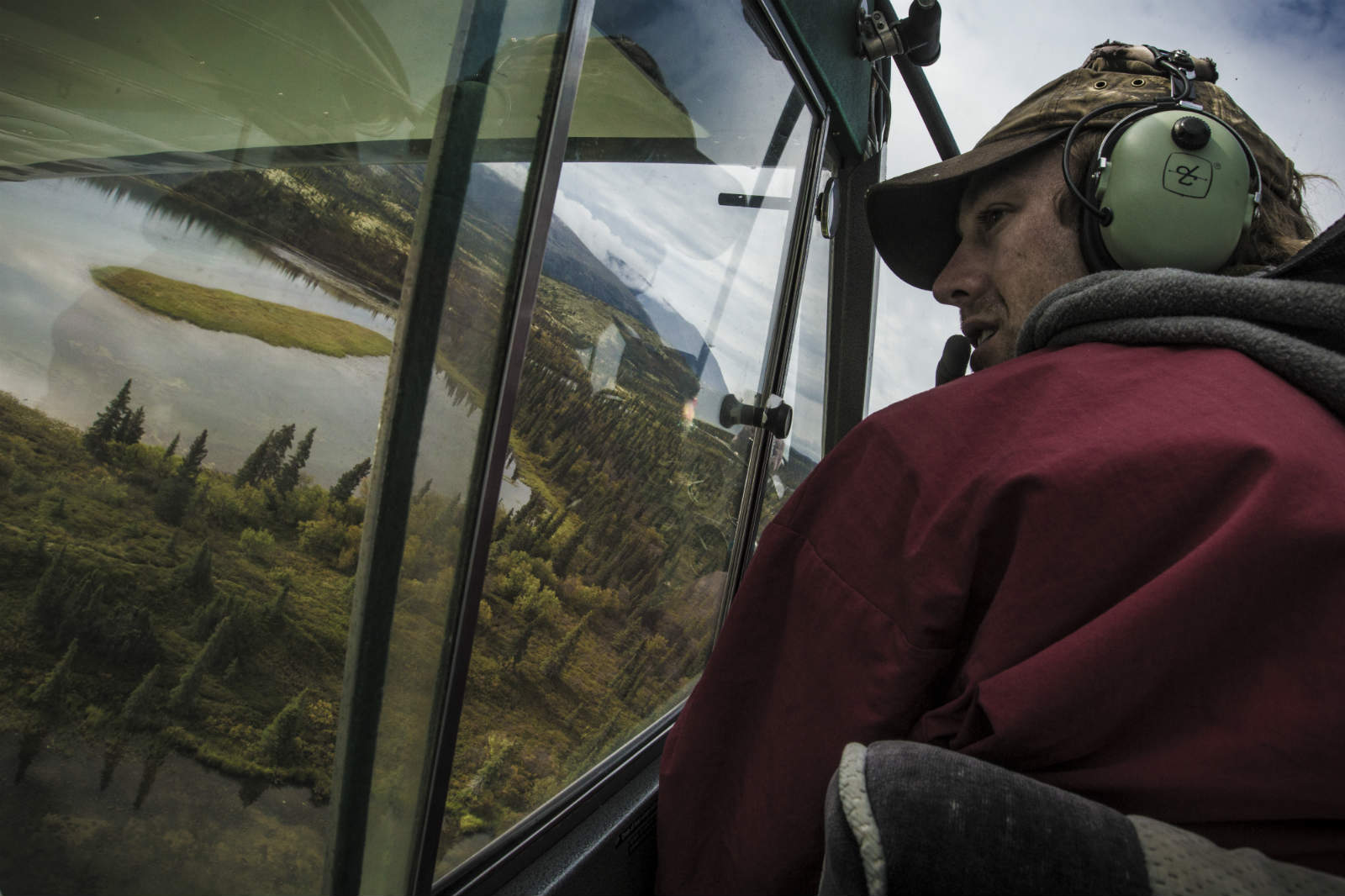 Jay had moved from his home in North Carolina to Alaska for a seasonal guiding job a few years ago. In his first seasons Jay spent a lot of time accessing remote fishing destinations in de Havilland Beavers and Piper Super Cubs, two of Alaska’s most classic bush planes. The fishing was world class, but the flying is what really hooked him. Soon he had earned his private pilot’s license and purchased his own Taylor Craft, a small and affordable two-person taildragger. Amidst Alaska’s snow-capped mountains, Jay had discovered his calling. He was becoming an Alaskan bush pilot.

By the time I ran into Jay he had become one of the top guides at All Alaska Outdoors, a high-end fishing lodge in Soldotna, Alaska. He had also logged an impressive 800+ hours of challenging flight time in less than two years and was one certification away from becoming a commercial pilot. Jay’s focus was clearly on flying, but he was still intrigued by whitewater kayaking. He knew that exploratory paddling was my passion, and that access to Alaska’s remote rivers was the main barrier between numerous first descents and me. Jay wanted to help make these trips possible for my team and me, so he and I started scheming. After days of scout flights and some experimentation with strapping our kayaks to the floats of his plane, we had developed a plan to fly our team into three un-run rivers in the Lake Clark National Park. 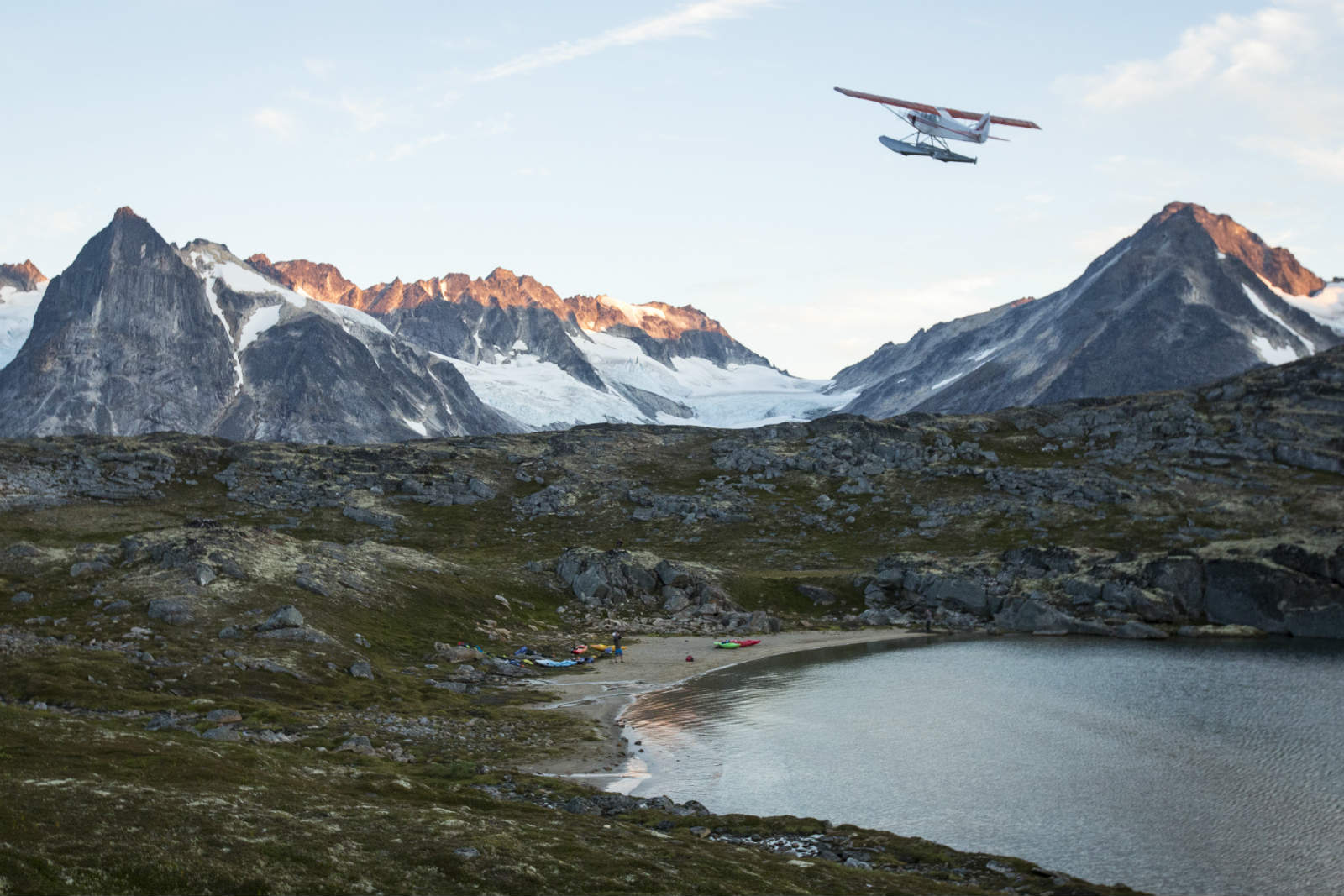 Within a couple weeks we had flown into and successfully paddled two rivers on the Western slope of the Lake Clark National Park. These rivers, the Kontrashibuna and Tazimina, were wildly spectacular and full of great whitewater. From the flights in to access the rivers and the rapids we paddled, to the campsite views we enjoyed and the fresh fish we caught and ate each night, the trip couldn’t have been any better. Best of all though, we had kept the Jay’s Fork of the Tuxedni River (the crown jewel of the area) as the grand finale. 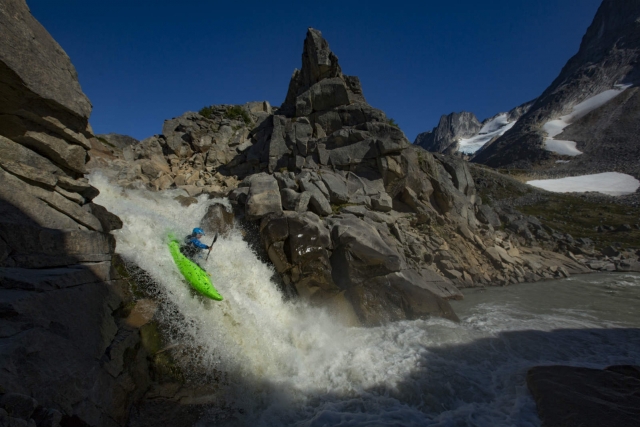 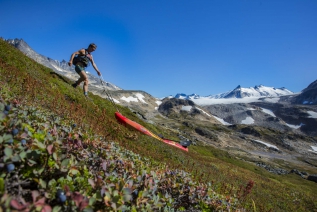 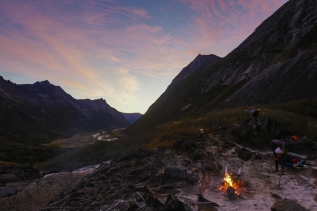 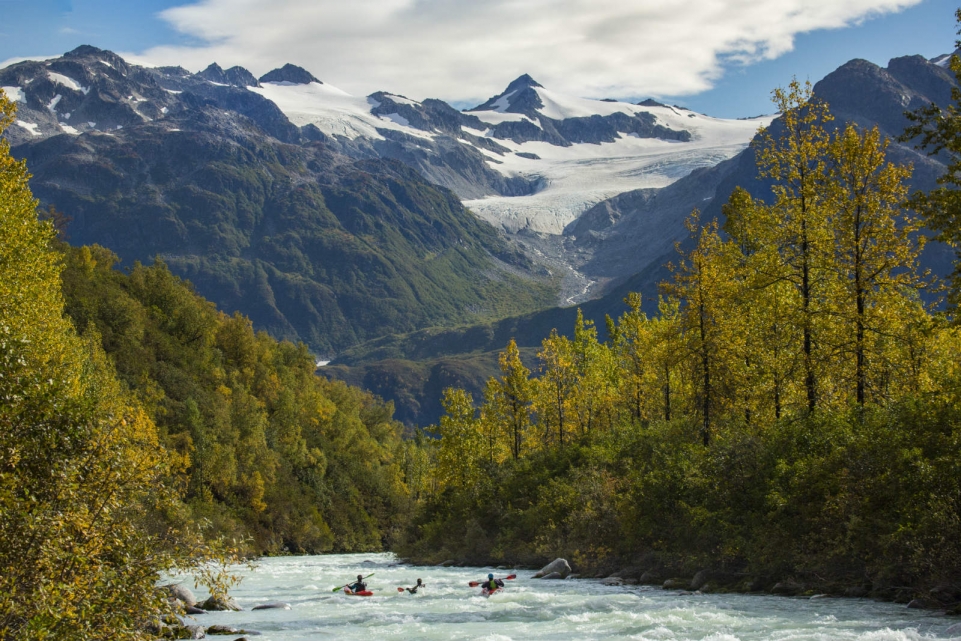 Unfortunately, our decision to leave the best for last backfired as thick cloudy weather kept our team from being able to fly up to the put-in of the Jay’s Fork. After almost a week of waiting out the weather, the skies finally cleared. But, Jay and Ben (another pilot and a friend of Jay’s who was helping us fly into the rivers) were both busy working on remote moose hunts and fishing trips. I was getting desperate, asking everyone in town with a plane capable of accessing the put-in if they would fly us into the Jay’s Fork. When a helicopter landed nearby I paddled across an inlet as fast as I could and begged that he fly us to the put in. All of it was to no avail. No one would fly us into the river and the weather was about to go to shit.

We had accepted our defeat, scheduled an expensive commercial flight back to Anchorage for the following afternoon and were enjoying a delicious dinner of Silver Salmon, that our host Don had caught just a couple hours prior. As I took my last bite of salmon, Jay, who we had thought was still occupied with his moose hunt, came taxiing up to a nearby beach in his green and white float plane. A switch flipped. We went from calm and relaxed to anxious and excited. Though the margins were tight, we realized that we had just enough daylight for Jay to fly three of the five paddlers in our team to the put in, and that possibly he could fly the other two in the following morning. If we wanted to paddle the final of the three rivers, this was going to be our only opportunity. 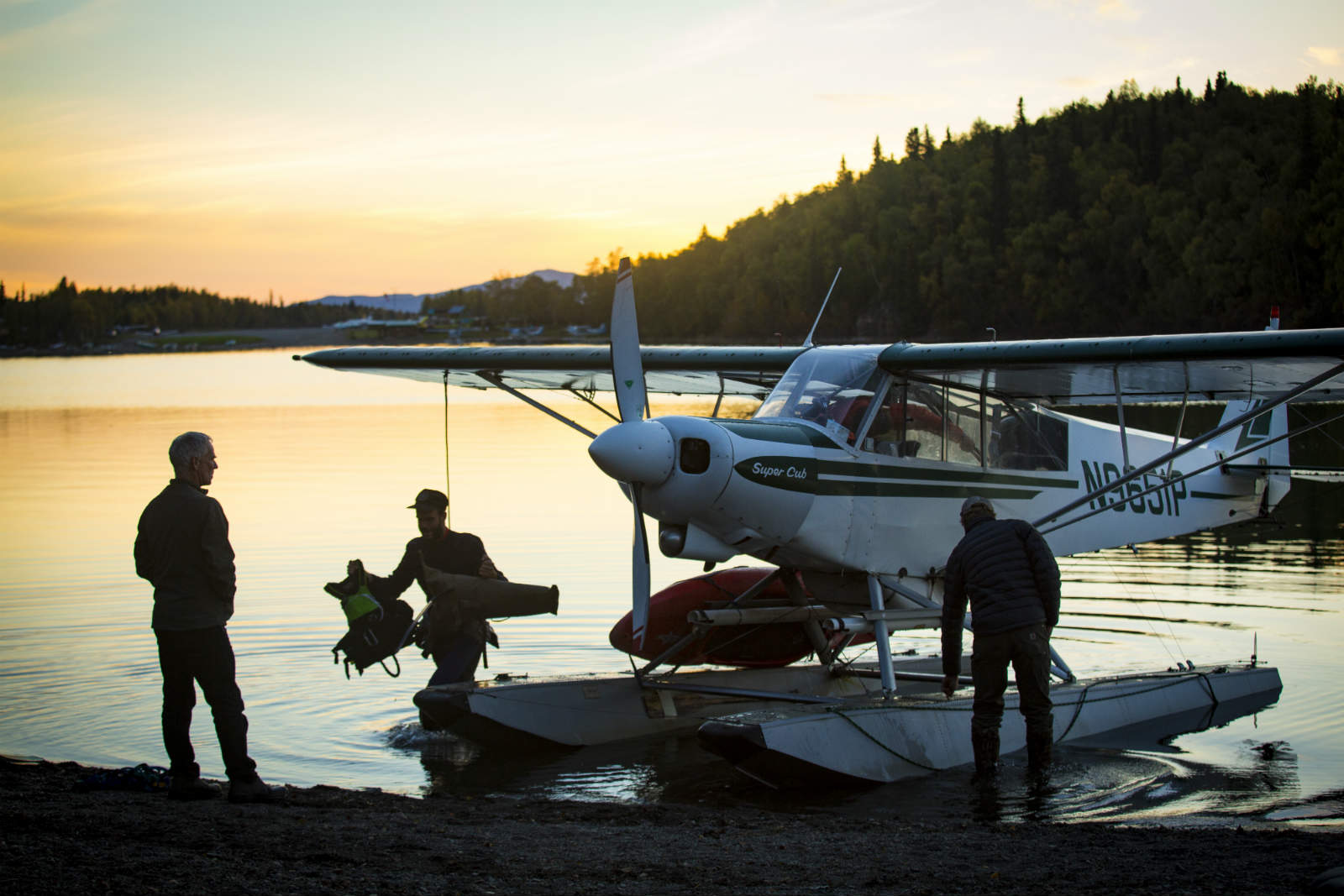 Jay stepped out of his plane. As he walked toward us I could sense his exhaustion from the past week of hunting and camping in the woods. But without much hesitation he said, “Sorry I’m late guys. You ready to get up there?” We didn’t need to give a response. By the time Jay had sat down to eat his Salmon dinner, we had loaded his plane to max capacity. Within 15 minutes of Jay’s arrival he was back in the air flying deep into the Chigmit Mountains, a kayak on either float, myself behind him, and paddling and camping gear loaded into every corner of the plane.

We landed at a small pond near the headwaters of the river, quickly unloaded the kayaks and gear, then Jay took off to go pick up the next group of paddlers. By the following morning, Jay had miraculously delivered all five of us, our boats and gear to the put-in of the river. On his final flight he narrowly made it home, flying 20 feet above a glacier and 40 feet beneath a ceiling of thick clouds. 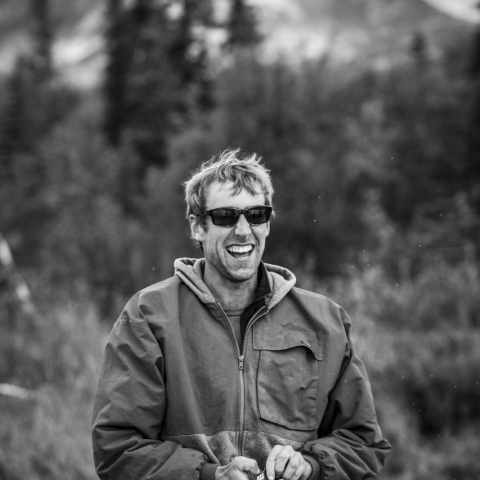 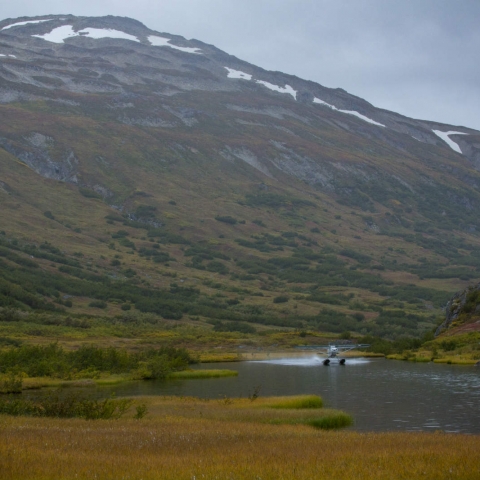 The next five days during our descent of the Jay’s Fork of the Tuxedni were some of the most challenging, rewarding and glorious days of our lives. All of this would not have been possible if it were not for the generosity and kindness of a friend who I had only met a couple months before. Jay put everything on the line for us and we owe it all to him. Every smile we shared, every rapid we paddled, every mountain view. For our fortunate team, Jay Mahan made possible the trip of a lifetime.