How Not to Pack for an 8-Day Canoe Fishing Trip

The overwhelming sense of anticipation and excitement that precedes a multi-day paddling and fishing trip is something I can’t get enough of. When I start to pack, I sit on the floor surrounded by knives, first aid kits, water filters, spare paddles and other miscellaneous (mostly necessary) gear I’ll need for the upcoming adventure. It helps focus my mind, mentally preparing myself for the challenges that lie ahead. It’s a form of meditation.

In most cases, this almost obsessive level of preparation pays off in a smooth expedition with minimal hiccups. In other cases, such as our 8-day, 100-mile canoe fishing expedition through upstate New York, massive miscalculations can lead to extreme hardships.

Whenever planning a multi-day canoe trip, don’t ignore or underestimate any portages you may have to make. If anything, overestimate its level of difficulty. Of the 100 miles we would be traversing down rivers and across lakes, ten miles would be over land. “It won’t be that bad,” I remember Ben saying. The reassurance was well received. Portaging hundreds of pounds of gear and two 90-pound canoes didn’t sound like a good time. Who wouldn’t sugarcoat the idea?

It turned out Ben was wrong. It was that bad.

We left New York with more than just sore muscles and stiff backs, though. This miscalculation taught us a valuable lesson in prioritizing gear when packing for a multi-day canoe trip. This is my guide for how not to pack for an 8-day canoe fishing expedition.

Bedroll: I have lower back problems, so sleep doesn’t come easy when I’m lying directly on the ground. On this trip, I opted to bring a foam sleeping pad for extra support rather than an inflatable one. I justified the decision because it wasn’t heavy, but what I failed to think about was how unwieldy it was. This giant piece of foam possessed an uncanny ability to run into (and somehow get stuck in) just about every branch and twig on the trail, further slowing our snail’s pace. A few days in, I was looking for homeless people to donate it to for the tax write off. Next time I’ll just pack extra Advil and sleep on the ground.

Clothing: Under the pretense that we’d have tons of space in the canoes, I opted to bring several changes of clothes for those eight days. While this might have proven useful had we run into a group of attractive girls in the middle of the wilderness, I easily could have worn the same outfit the entire trip: NRS Sidewinder Bibs over any one pair of pants, an NRS lightweight hoodie over an H2Core silkweight shirt and NRS Velocity boots to protect my feet. Most of my spare clothing remained untouched over the eight days, adding to our bulk and weight while serving no real purpose. I thought a fresh wardrobe may help with the inevitable smell of a human body eight days removed from a shower, but according to the hotel desk clerk we met after the trip’s completion, that proved to be untrue. And of all the things to skimp on, I only brought one pair of socks. On nights five and six, I would have traded one of my fishing rods (you know I packed multiples) for a second pair of wool socks as temps dropped below freezing after dark. 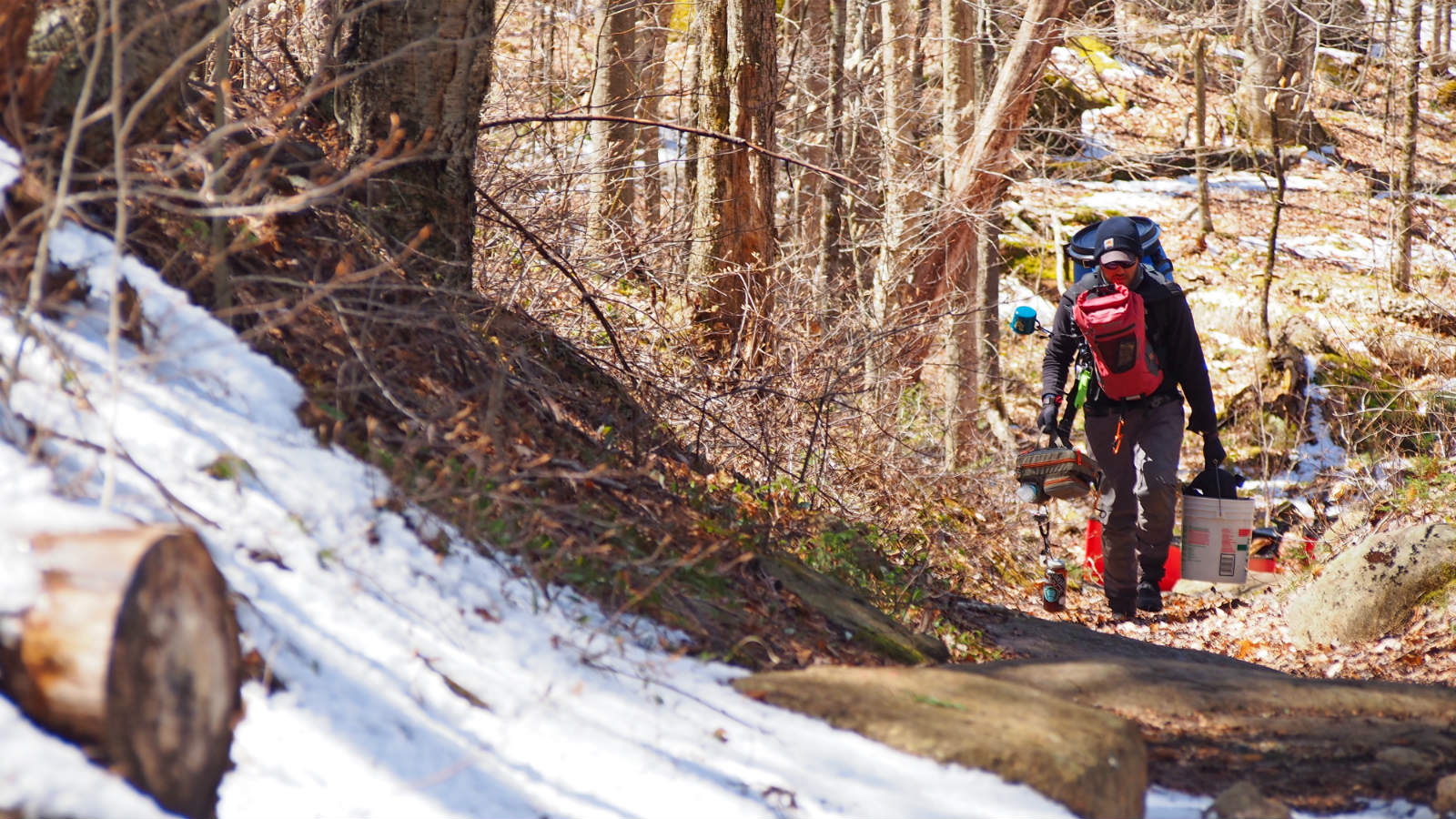 Batteries: As a videographer, batteries aren’t a luxury, but a necessity. They also happen to be extremely heavy. The four of us brought a variety of battery banks to charge our arsenal of cameras, and while they did their job, they added close to 30 pounds to our already gear-laden canoes. Ben brought the Yeti by GoalZero, which was extremely convenient, but I’m relatively certain it weighed more than the canoes. In this day and age, there are much better space and weight-saving options, such as the BioLite Stove, which creates electricity from fire, or the Estream, which uses water current to generate and store electricity. Either of these options could have provided an endless source of power to charge our devices, without the extreme weight of battery banks.

Fishing Gear: Heading into unfamiliar waters fills me with a level of anxiety that most would experience before a presentation to the CEO about tanking profit margins. Ironically, my career revolves around heading into unfamiliar waters in search of fish. My initial plan was to take only the bare minimum when it came to tackle; I remember myself using the phrase “just the basics.” Apparently “the basics” equated to several of every type of bass lure I’ve ever thrown, and a few that I haven’t. With four tackles boxes full of lures and four fishing rods, I knew I’d be ready for anything that swam our direction. Fast forward eight days, and all but six or seven lures had remained untouched, with all of my fish biting the same two or three. 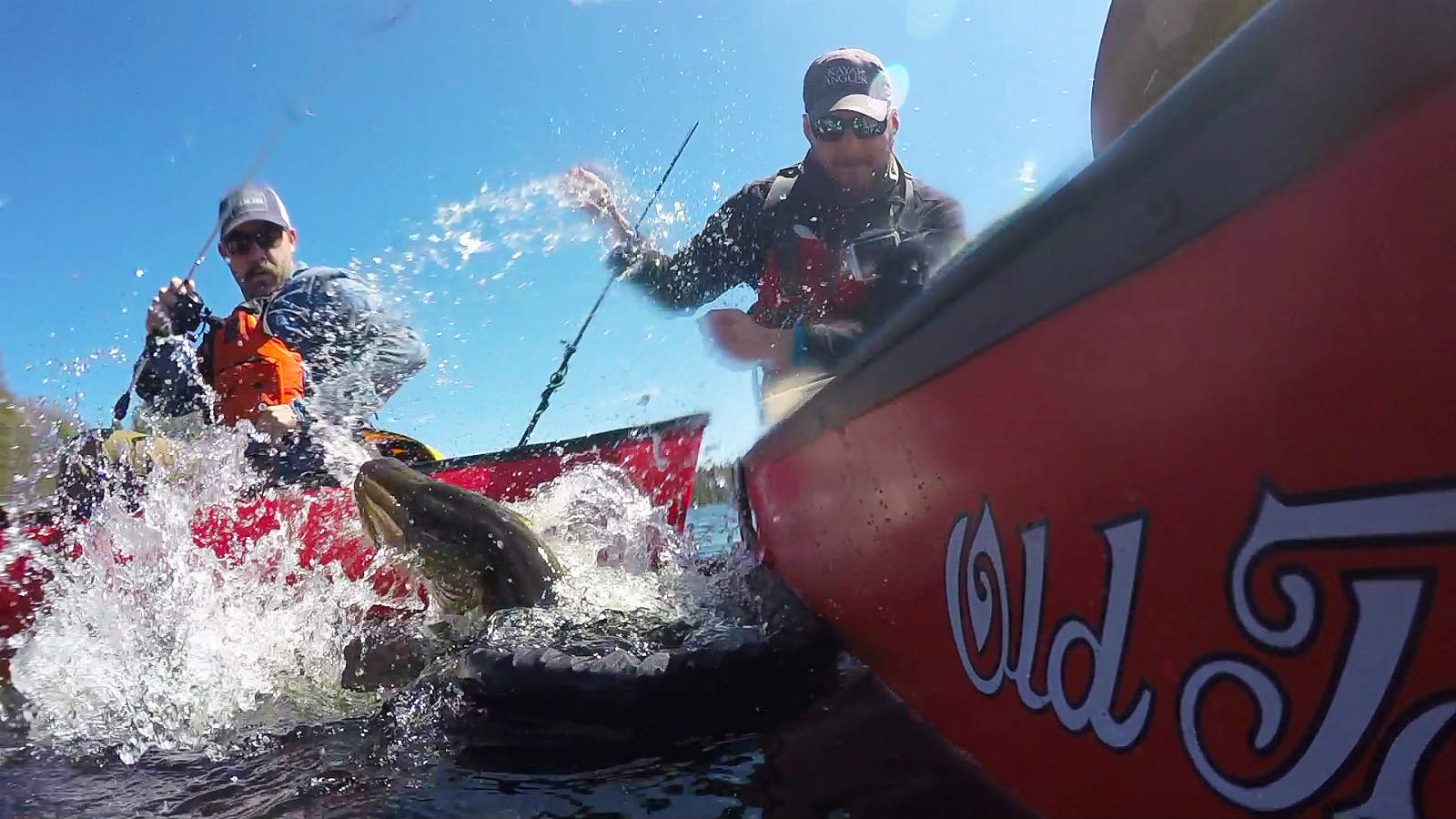 Food: Typically, on multi-day kayaking trips 90% of my calories come from pre-packaged, dehydrated meals from brands like Mountain House or Backpacker’s Pantry. These are lightweight, compact meals that keep forever and just take boiling water. On this trip, Ben touted the advantage of having all the space a canoe has to offer, insisting that we bring a Yeti 165 filled with ice, steaks, eggs, sandwich-makings, fresh vegetables, etc. While the meals were enjoyable, the Yeti proved to be more than a bit unpleasant to carry over rough terrain. Halfway through the trip, I would’ve eaten chalk for every meal if it meant I didn’t have to carry that cooler one more step.

At the end of the day, a good rule of thumb is that every pound counts when you’re living out of a paddlecraft for more than a few days. If you don’t have to have it, leave it. If you think you have to have it, leave it. While you may find yourself without a few luxuries, your arms and back will thank you for every ounce of weight you left at home.