Beat By My Own Boat

If you haven’t heard about Amina Tayona, you should read up. Amina is from Bujagali Falls, a small fishing village in southeast Uganda where the White Nile once flowed from its beginnings in Lake Victoria. She began kayaking in 2009. Her talent was quickly noticed and today she’s a safety kayaker for Nalubale Rafting on the Nile River. One of only a few women who make money by kayaking, and in a village where women tend to raise children rather than get an education or a career, this 23-year-old is an anomaly.

In 2015 she was the only female Ugandan paddler to compete at the 2015 Freestyle World Championships on the Ottawa River in Ontario. Today, she’s still a member of the Ugandan Freestyle Kayaking Team. And it was she and her teammate, also named Amina, who would ultimately beat me at this year’s Nile River Festival Endurance Race. 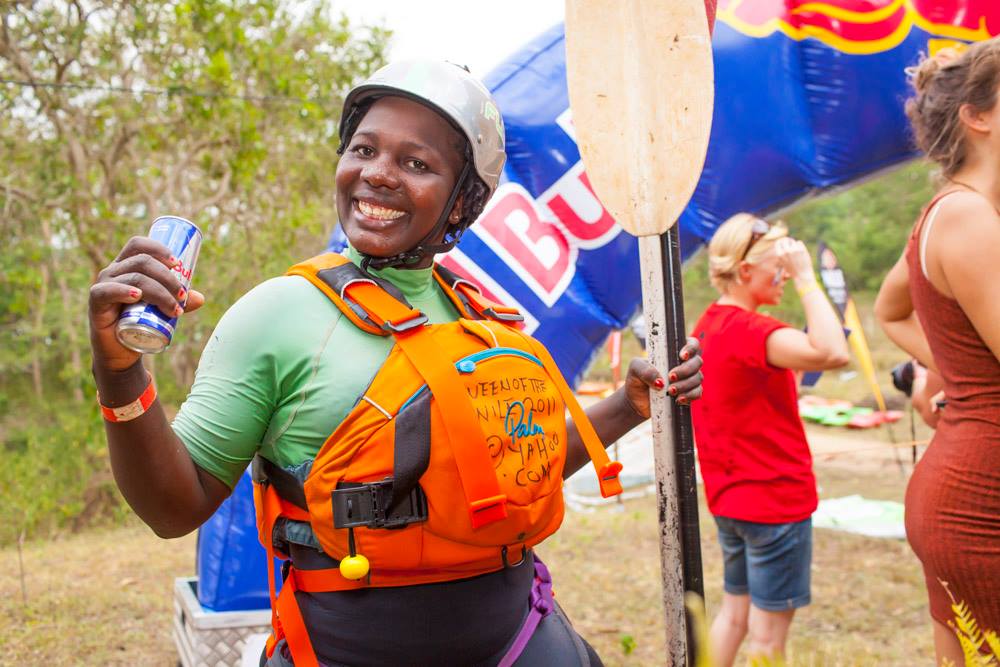 The start gun fires and 60 playboats leave the bank at once, charging downstream toward what seems like endless lengths of flatwater broken up by a few giant rapids. The start is chaotic, with paddles bumping boats and boats bumping paddles, everyone trying to nudge away from the pack. Athletes scream out to their race partner, “Come on! We’ve got this!” as they charge through the crowd. My heart is pounding as I try to find a pace I can maintain for the next 35 kilometers. I take a quick look around to size up the competition.

Right on my tail, threatening to pass me is Amina Nakirya, and just to my left is Amina Tayona. The pair is infamous for winning the Nile River Festival endurance race year after year. Both girls work as safety kayakers for rafting companies on the Nile, and thus paddle the river every day, building strength and speed like you wouldn’t believe. The amount of time they spend on the water is very apparent as they increase their paddling pace and slowly but surely leave my race partner and me in their wake. As these ladies are leaving me in the dust, I take a quick glance at Amina Tayona’s boat. The stickers look familiar. Really familiar. Perhaps it’s just that my old boat was stickered up in a similar fashion. But no, I recognize those exact stickers. I’m shocked. Everything about this boat looks like my old boat that I used in college. 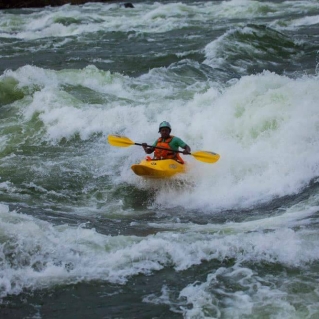 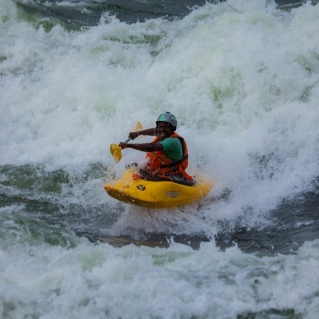 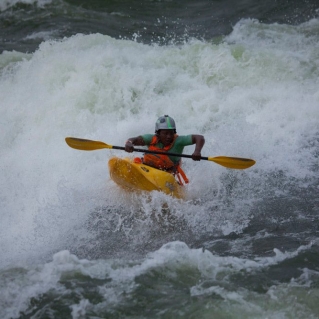 My paddling career during my first two years of college wasn’t something to brag about. I was living in West Philadelphia, taking a full course load at the University of Pennsylvania, and simultaneously working part-time as a barista in order to be able to afford food (beer) and rent. City life was quickly draining my happiness and I needed to find an outlet to get back to my Montana roots. I joined the UPenn outdoor club and somehow convinced them to give me funding to buy the club two whitewater kayaks and sets of gear. One of those boats was a yellow 2008 Jackson Kayak Star, which I immediately plastered with stickers from the paddling club that taught me how to kayak back in Montana.

I didn’t own a car, but occasionally some friendly Philly locals would take pity on the poor college student and pick me up in the city and drop me at Scudders Wave for a weekend of playboating. After two years of city life, I decided I couldn’t take it anymore and returned to Montana to finish my degree. I left the yellow Jackson Star with the UPenn outdoor club and never saw it again until it was speeding past me in the endurance race at the 2017 Nile River Festival. That was my boat.

After I left the yellow Jackson Star behind at UPenn, my friend Karen started using it. She paddled the boat around Philadelphia for another year before she took it with her to Uganda. She lived and paddled in Uganda for two years, and when she returned to the U.S., she gave the boat to Amina Tayona, who has been using it ever since. Amina is now training in the yellow Jackson Star for the 2017 Freestyle World Championships that will take place in Argentina this November. She may have beat me that day in January but I think it’s fair to say that a little part of me still won that race.