It’s spring thaw in eastern Ontario. Rivers are high, fueled by snowmelt and seasonal rain. It’s an overcast Saturday in May and a crowd of people gather at the edge of a raging rapid overlooking a massive crashing wave-hole called Lovers. At erratic intervals, rafts, kayaks and canoes plunge through the rapid, with varying levels of success and style. Each vessel is racing the clock, trying to make the fastest lines down the river. This is Hell or High Water (HOHW), one of the largest rafting races in North America. The cola-colored water frothing at the Canadian Shield granite may feel like remote Canadian wilderness, but the crowd—cheering loudly for clean lines and carnage—are just a few hundred meters walk from downtown Petawawa. This whitewater playground is their backyard. 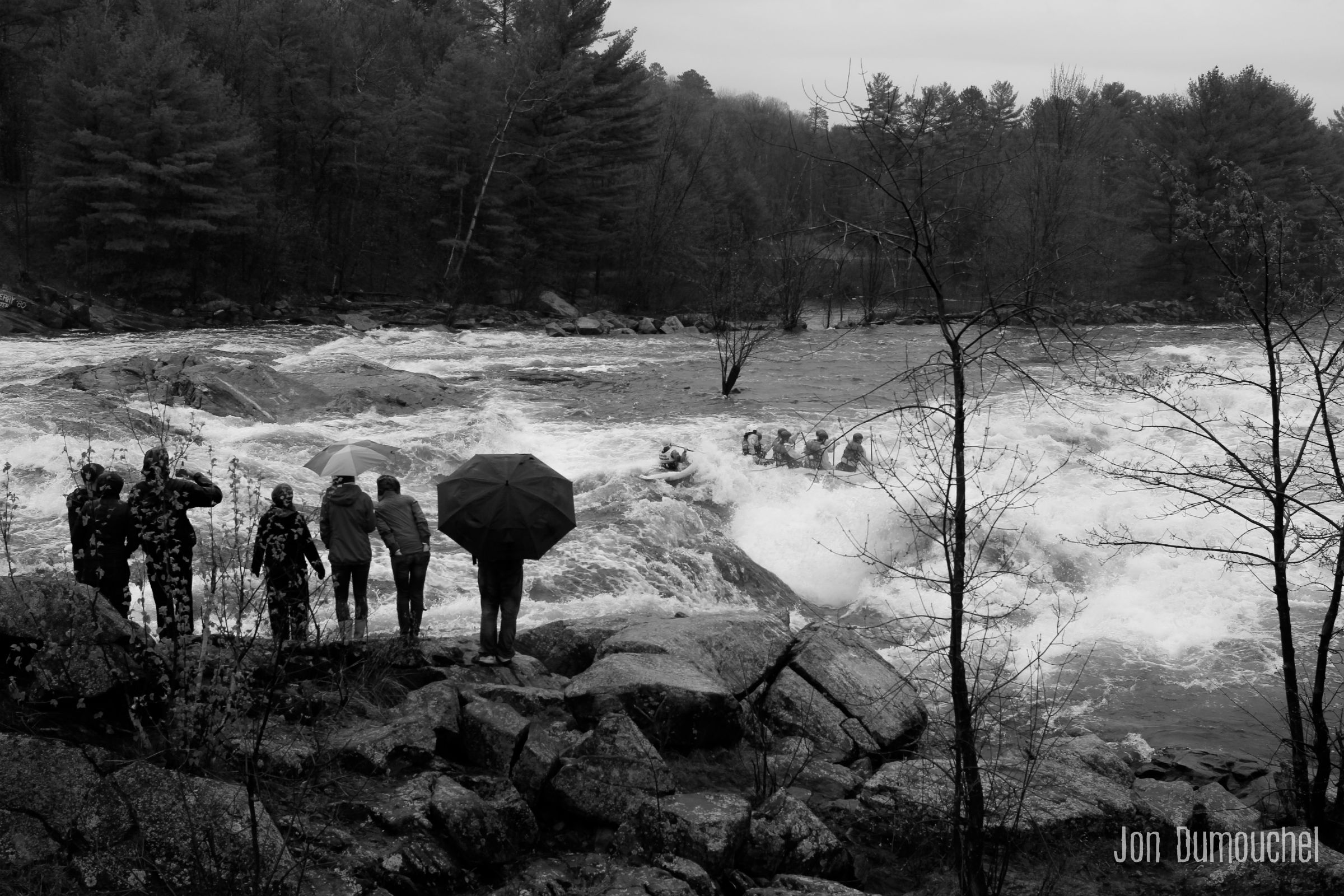 Imagine this scene of community, whitewater and fun, replaced by a wall of concrete. A river-wide weir looms in place of Lovers and transforms the rapid into a dangerous pour-over at high water. The beach and public waterfront access in the calm bay below the rapids is no longer—the river reduced to a trickle. Fortunately, this scene is fictional, but could have been a reality if Canadian hydropower development company Xeneca had been successful in their plan to build a dam on this section of the Petawawa. Today, the Pet still runs free, thanks to the relentless work of a strong community of paddlers and conservationists who fought a long, eight-year battle to keep their home river safe. And every spring, the celebration of this river is incorporated into the Hell or High Water race, the festival that helped save the Petawawa. 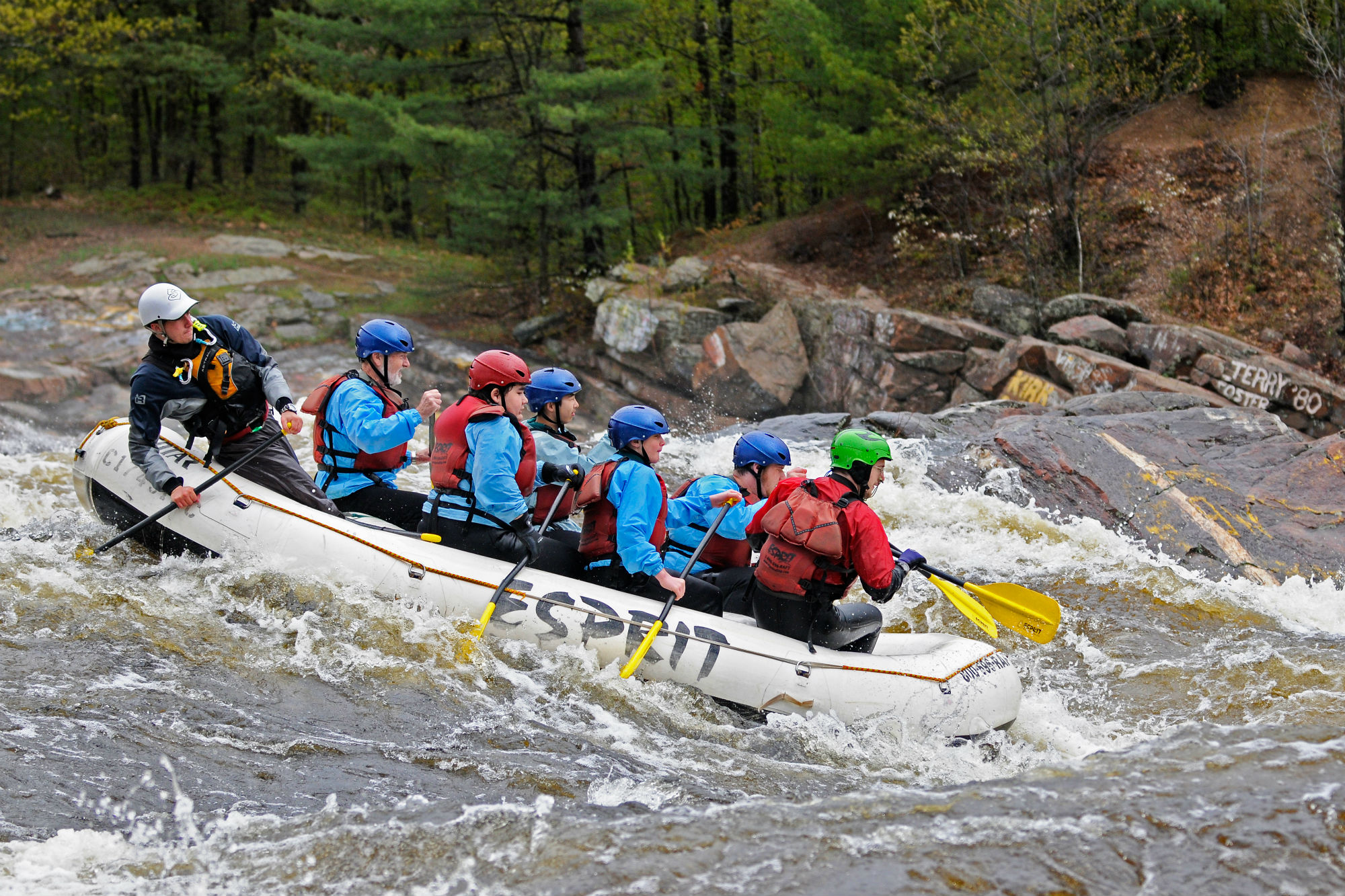 The Petawawa
The Petawawa River flows from the heart of Algonquin Provincial Park in central Ontario, and through the town of Petawawa before feeding into the mighty Ottawa River—one of Canada’s most historic waterways. The name Petawawa is the English rendition of the Algonquin word: biidaawewe, meaning “where one hears a noise like this.” The ‘Pet,’ as locals and paddlers call her, flows unobstructed through dense deciduous forests and over smooth sheets of Canadian Shield bedrock for almost 120 miles from its headwaters in Algonquin Park to the Ottawa River. And in the middle, it runs through Petawawa, becoming a downtown whitewater playground.

The town of Petawawa is a three-hour drive from the US-Canada border and is home to 16,000 people, predominately known for its Canadian Forces Base. The town is named after the river that cuts through it and these rapids have created a reputation for the town. For many paddlers in the province, the word Petawawa conjures images of whitewater. And fortunately, that whitewater still flows under the bridge and through the town. 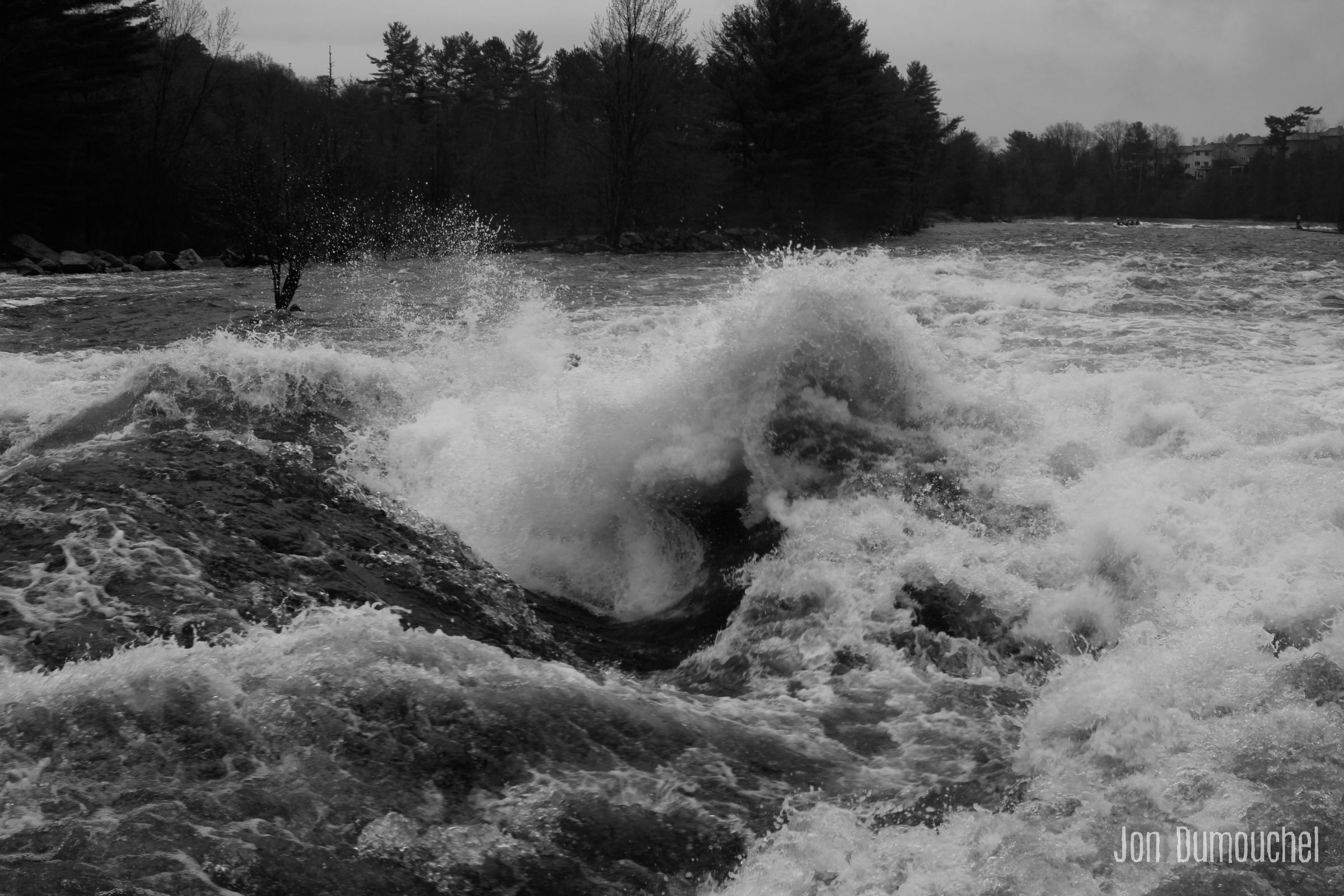 ‘Save the Petawawa’
As one of the last free-flowing rivers in this part of Ontario and one of only two undammed tributaries of the Ottawa River, the Petawawa is a wild jewel—one that locals and paddlers fought to defend. For eight years the town of Petawawa and the Ontario paddling community battled against a private hydroelectric company planning a hydro dam on the Pet, right where the river cuts through the town.

Shortly after the hydro project was proposed in 2007, black and white signs stating “I object to the damming of the Petawawa River,” were stuck in the front yards of paddlers across Ontario. ‘Save the Petawawa’ became the slogan for the fight against the proposed Xeneca Power Development Inc. hydro project and as more information about the development known as the ‘Big Eddy Project’ was revealed, resistance mobilized.

A small group of dedicated and concerned local paddlers banded together and eventually formed alliances with other community groups including local and provincial paddling clubs, local business, and organizations like Whitewater Ontario, Ontario Rivers Alliance and Ottawa Riverkeeper. The list of concerns was long. The local tourism board got involved, asking for an economic study of the potential loss of income and damage to the tourism branding of the County of Renfrew. The ecological damage caused by the potential dam was high on the list of concern, as the river supports provincial Species at Risk: the American Eel and the Lake Sturgeon. The potential negative affects on the local Algonquin First Nations people also raised alarm. And then there was the paddling. The dam would reduce Railroad Rapid, to a trickle, with much of the water being held in a head pond to be released when demand was greatest. A max power production of 5.8 mega watts was expected for the power plant; roughly enough energy for 1/16th of power used by the small town of Petawawa.

The communal opposition resulted in the creation of the Community Alliance to Save the Petawawa (CASP). Working together, they educated themselves on how to fight the construction and commissioning of a hydro project. They were small fish in a big pond. Petitions and letters to local political reps demanded time and energy, as did their attempts to glean information about the project. In the rare occasion when Xeneca did respond to residents’ concerns, their responses were vague, often laughable. Xeneca claimed they would mitigate the negative effects the dam would have on fish populations by “improving spawning grounds and fish hatcheries elsewhere.” When they got wind of the anti-dam momentum of the paddling community, they offered to meet to discuss designs and plans, and even offered to fund HOHW, an event whose sole purpose was to raise funds and awareness to fight their development. Xeneca placed ads in the local newspaper and went door-to-door distributing their information. The movement had them on their heels.

Whitewater now had a voice, and HOHW let it be heard. Finally, six years after the first HOHW event, river advocates breathed a collective sigh of relief when, at the end of March 2015, the Canadian Department of National Defense abruptly terminated their temporary lease agreement with Xeneca. Shortly thereafter, it became public knowledge that Xeneca was undergoing ‘restructuring’. The doors of their Petawawa office have been closed ever since. And the river is still running free. 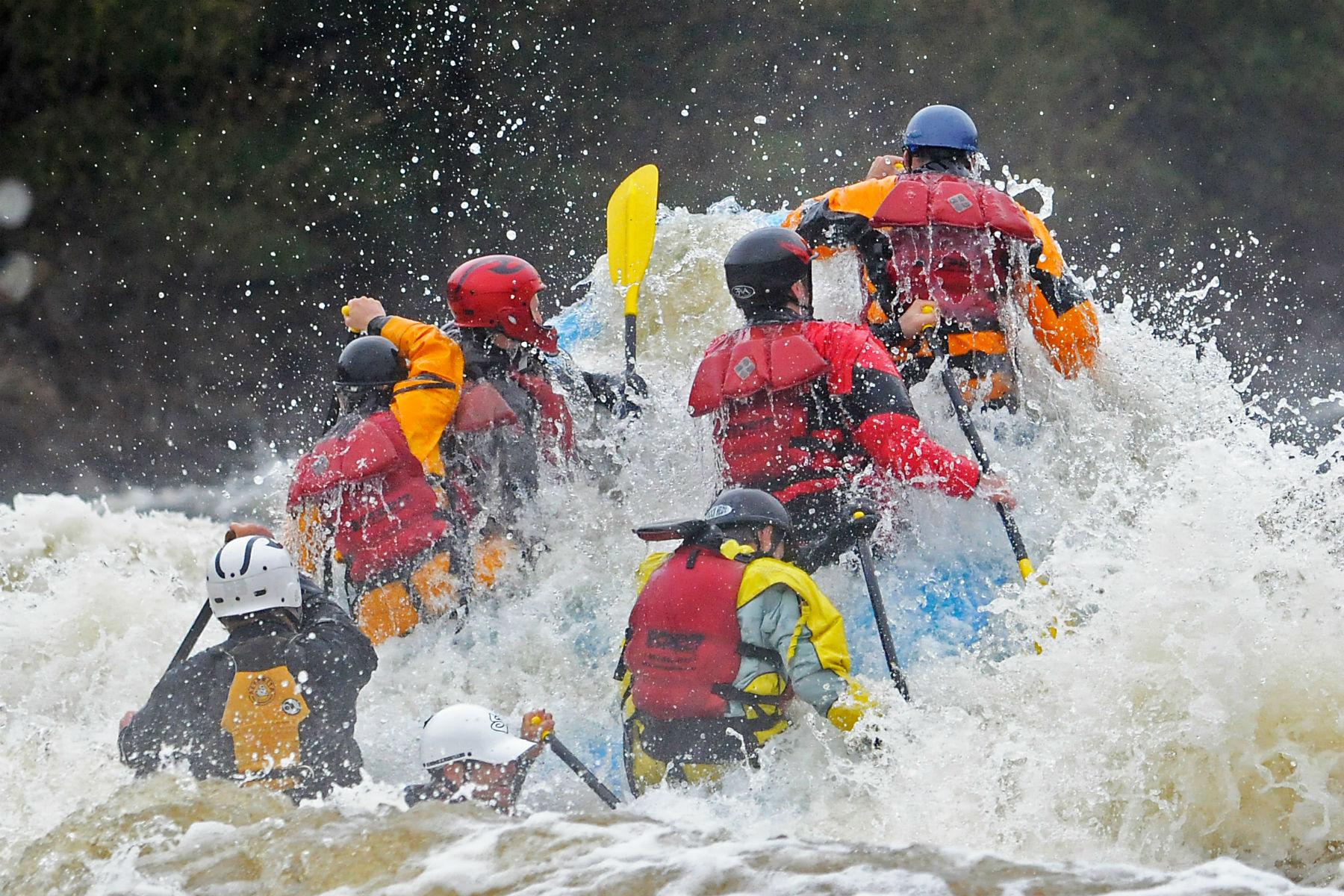 About HOHW
In the early morning of May 13, 2017, the parking lot just a few meters from Lovers, will fill with trucks, cars and vans topped with whitewater vessels. Tents of vendors, supporters and community organizations will pop up throughout the park and racers will mix with locals. The 9th annual HOHW race means another celebration of the Petawawa.

The rafts that will come blasting through the natural stadium overlooking Lovers will be filled with a mix of teachers and nurses, soldiers from the local military base and working professionals from town. For some it may be their first whitewater experience, and for others, like the Canadian National Rafting Team who race each year, this is a training event for international competitions. The national team uses the Pet for workouts too and when the battle against Xeneca was in full swing, they named their team the Petawawa Rafting Team to draw awareness to the multi-recreational uses of the river. 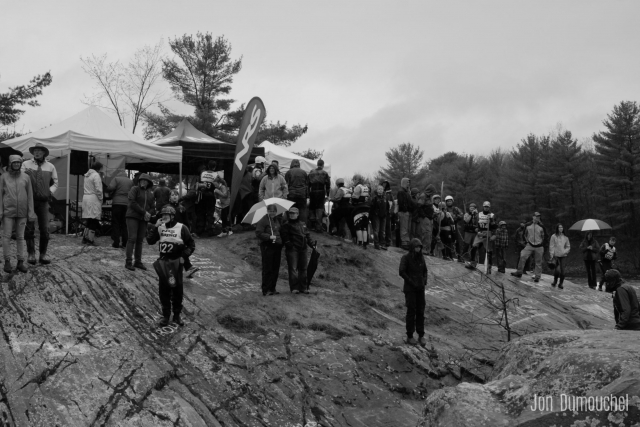 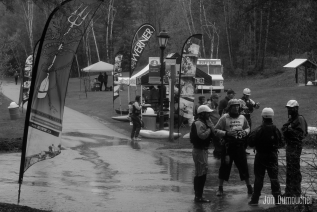 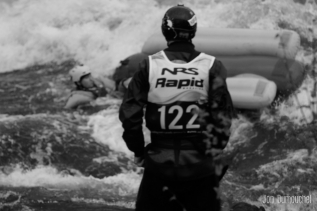 As an annual event, HOHW serves every ability of paddler. There are different race categories for kayak, canoe and raft including longboat (creekboat), short boat (playboat) and open canoe, all of which race the 1 kilometer long class II-III+ race course which has ample spectator viewing options. Friendly rivalries have developed between local businesses as they race through their downtown rapids. Rafts and guides are provided by Ottawa river rafting company, Esprit, and for non-whitewater people, events catered toward families are offered on site including free kayak and SUP demos on flatwater. A dragon boat race category makes it so everyone can enjoy river racing and the after party, held in a rustic lodge near the campground, is always fun with food, drinks, an awards ceremony and raffle. 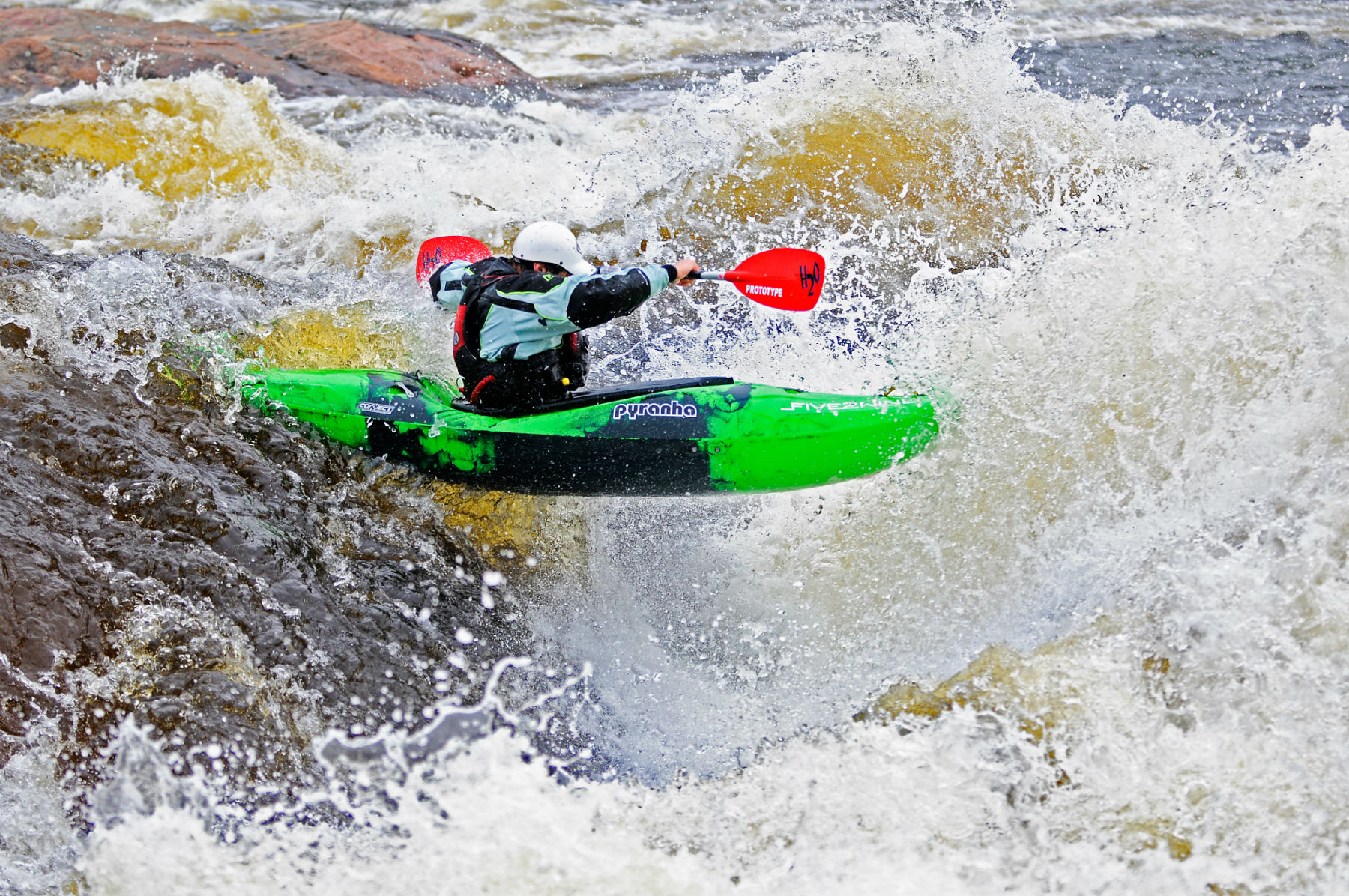 This race offers people a variety of firsts, from getting in a raft to entering your first downriver race, the relaxed and friendly setting ensures all people, from whitewater-newbies to pros, share this river. It highlights the recreational value of rivers, making it known that the tourism generated is good for the town’s economy. And it creates an atmosphere where paddlers as well as general public celebrate the river.

With the help of local sponsors, HOHW works to minimize the cost of participation, focusing more on a desire to get people outside, enjoying the excitement of whitewater paddle sports. Many spend Sunday after the race paddling the Upper Petawawa, a beautiful class IV known as one of the best in the province especially during the spring. 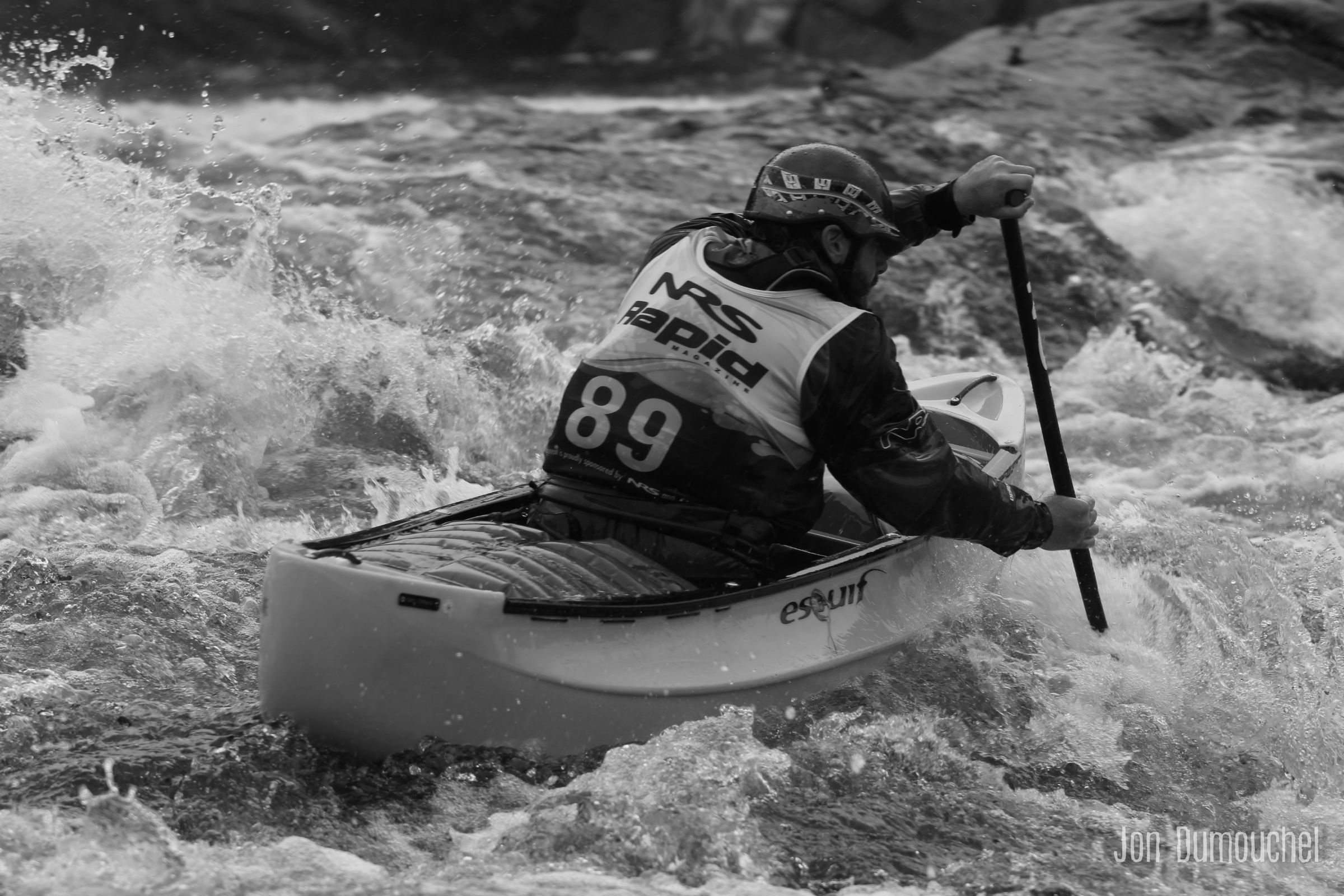 Hell or High High Water 2017
This year, high water takes on a new meaning with the rivers in the area under intense flooding. The Ottawa River has swollen beyond its banks, turning the streets of Gatineau Quebec, parts of Ottawa, and Montreal into rivers navigable only by boat. As a major tributary of the Ottawa, water levels on the Petawawa are hitting record heights. Floods are natural, seasonal events and part of what makes the Petawawa a wild river. As an event, HOHW has a cut off of roughly 150 cubic meters per second (cms). The current flow is sitting around 400 cms and although water levels are already falling, organizers expect to see the river running in the range of 275 cms during the weekend of the race. True to its name, the event will go forward! To accommodate safety, organizers have created a short course and a long course allowing the option to run the biggest set of rapids. They have also omitted the usual boater cross race for this year.

Paddling to celebrate rivers. Paddling to protect them. HOHW has made whitewater something to be proud of in this small Ontario town; something to cherish and value. HOHW organizers put it simply: Hell or High Water celebrates the wild rivers of the Ottawa Valley; come celebrate with us. We say, hell ya!