Through a Daughter’s Eyes

Ca-ching, ding. Ca-ching, ding. The tollbooth in the small town of Hooksett, New Hampshire is surprisingly busy. It sits on the highway en route from the big cities of Boston and New York to the famed and quaint New England getaway cottages, tax-free liquor stores, and maple syrup shops.

It’s 1973. Taking the midnight shift, Kay Swift mechanically shuffles money and cars through with one thing on her mind: climbing. With long brown hair and a stunning smile, unbeknownst to Kay, she is blessed and burdened with the lifelong trait of being too intelligent for her own good. Car after car passes as she works doubles the summer after her freshman year at Dartmouth College, where she was part of the first class to ever admit women (which wasn’t necessarily a unanimous and resounding welcome). 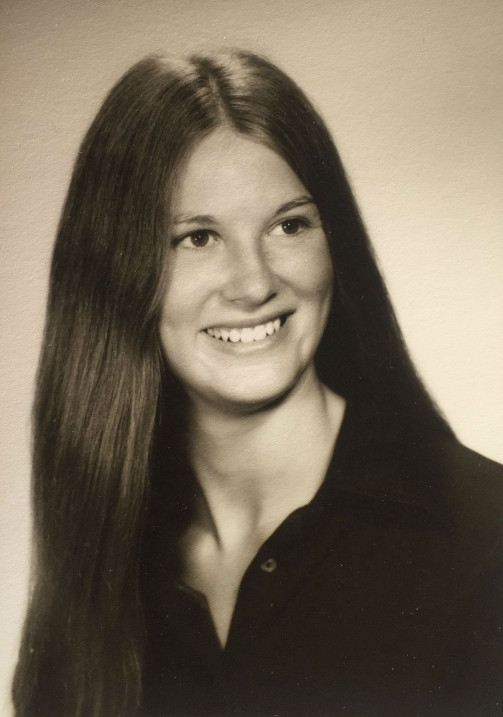 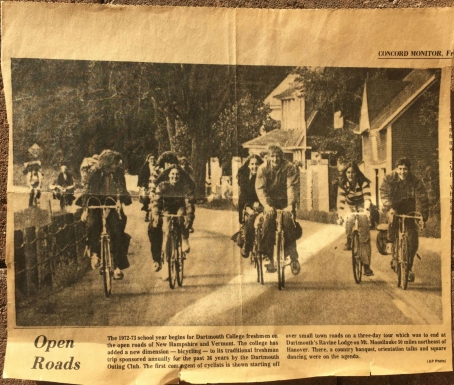 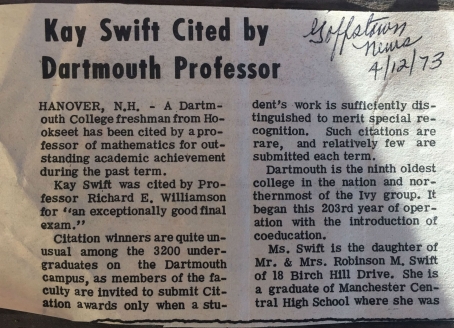 Kay worked for five weeks straight that summer before she told her mother, who had never left the Northeast and would never leave the United States, and her father, who had grown up in New Hampshire and returned after a stint abroad in the Merchant Marines with no intention of venturing anywhere else again, that she was quitting the toll booth and going out West for the rest of the summer to go climbing with “some guys.”

Kay had two older brothers who were perfectly happy returning home every summer to work for the small-town fence company, so Ma and Pop Swift didn’t quite know what to say to their little girl who was drawn to explore far-off places. They didn’t understand. But, they also had no say in the matter. Little Miss Swift (later to be Tenney) wasn’t asking for permission. 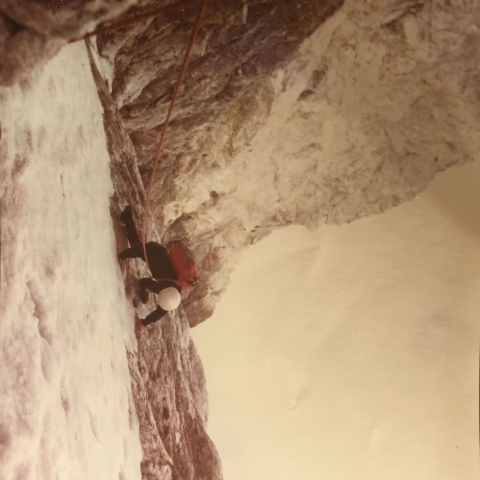 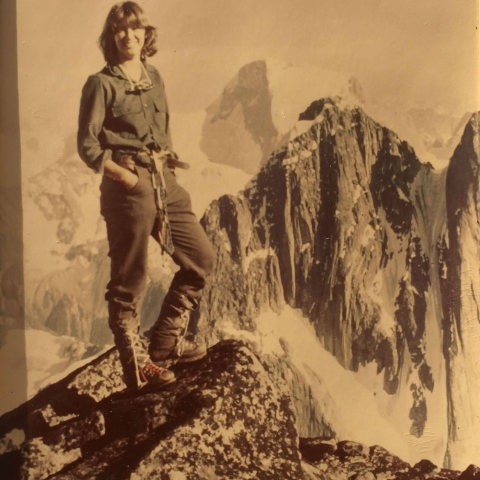 Living on far less cash than seemed humanly possible, Kay hopped a ride with a climbing friend to Denver, hiked her first 14,000 foot peaks, climbed in the Tetons, and met a Dartmouth Outing Club trip at the largely unexplored Adamant range in BC, where the group mountaineered, climbed and did a first ascent of Iron Man peak. When her ride went to meet his girlfriend in Vancouver, she hitchhiked around Vancouver Island solo.

Often the only woman on many climbing adventures, Kay felt fortunate to be at the dawn of the age of Title IX. For the most part, she was supported and encouraged. That’s not to say she never encountered hazing from different crowds. While out in Boulder Canyon that summer, a group of male climbers wouldn’t leave her alone about her incompetence and lack of place as a woman in a “man’s” climbing world. Her response was to gracefully pass them with her team on the climb.

That’s Kay Swift Tenney, and that’s my mom. At the end of the summer, she met up with her current boyfriend (who would later become my dad) Steve Tenney in BC to climb. When it came time, their three-person crew calculated the exact number of hours it takes in optimal conditions to drive from Vancouver, BC to Hanover, NH. They drove nonstop for three days in Steve’s rickety VW Bug, the back loaded with climbing gear and one person lying on top of it all, nose to the roof. They arrived on a Monday morning with just enough time to walk straight into their first classes of the term.

After that summer, my parents never kicked their addiction to the grandeur of the West. The unbridled magnitude of the mountains, cliffs and rivers felt like home. Every school vacation, they made the pilgrimage and immediately after my mom’s graduation, they moved to Sun Valley, Idaho. My mom and dad eventually went their separate ways after my sister and I were born, but they never ceased to provide unwavering roots for their daughters in the passion for the outdoors that brought them together. 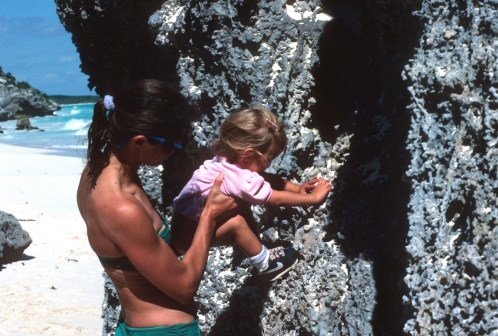 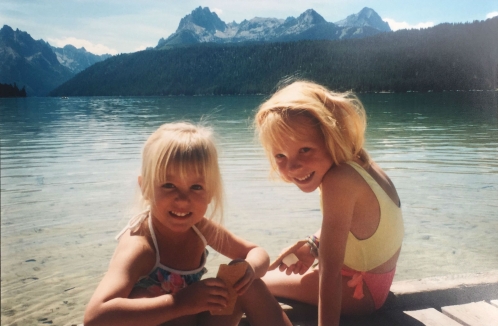 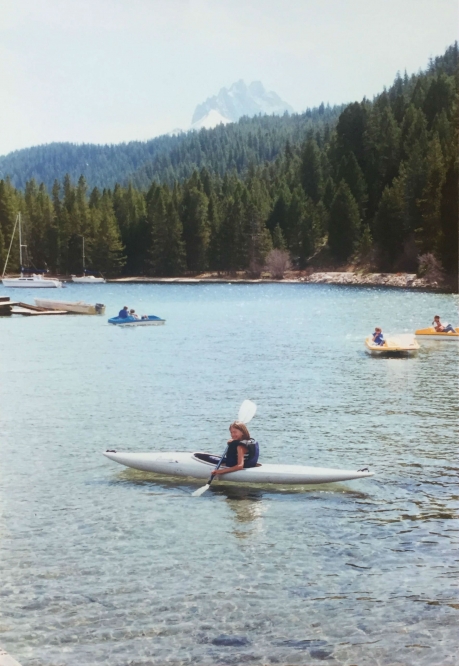 It was my mom who put me in a kayak for my first time when I was 12 years old, and I immediately fell in love. At the time, I didn’t know any of her stories. I was only recently hit with the insight that both of my parents had a life before I existed, and I should ask about it.

Kay had learned how to roll a kayak in college but relearned in her late 30s when she fully caught the river bug through some friends. Returning from my Dad’s one summer, I can distinctly remember when it happened because whenever we wove down a typical windy river road, there was a clear change in the way she drove. Slowing down with every rapid and potential surf wave, “madre” as I call her, was unconcerned with any trailing traffic. She would point out features on the river, and my older sister and I would point out features on the road.

Growing up, Madre had a policy with my sister and me: we were always welcome to come on weekend adventures with her and bring friends or not. But if we didn’t want to go, we were responsible for figuring out an alternative play date because she was going, and staying home wasn’t an option. My Dad was on the same program.

One of the years we spent our summer break with Dad in Telluride, we got a call from our mom on the banks of Lake Powell. Her voice was electric—she was about to kayak the Grand Canyon for her first time. She’d send us postcards with stories of waves and beaches and river tribes. She couldn’t wait to share them with us, she had said.

From what I can tell, being a parent teaching your kid anything can totally suck. I would enthusiastically take my mom up on opportunities to kayak and then yell at her for “not showing me the right line” if I flipped and swam. I would scream “Hurry up, I don’t know where to go!” as I passed her windmilling at full speed at any sight of a ripple. In general, I wasn’t a very good student or river partner when it involved her. It’s ironic how we can sometimes blame those closest to us for our own mistakes, especially when we’re kids.

My mom did the smart thing and handed me off to her girlfriends and my step-dad Bozo on the river. For the most part, I didn’t yell at them, I laughed and smiled a lot, and my mom got to covertly see it all from the eddies. I didn’t have to follow her for her to show me the way.

Once in awhile, I would fall into situations that forced me to admit my appreciation for—and pride of—her. I distinctly remember being an awkward middle school girl bobbing in an eddy and having a tanned 20-something year old, handsome kayaker say, “That’s your mom?!” pointing to the woman shredding Mill Wave he had been checking out. I shyly smiled and said, “Yeah.”

A couple of summers ago, my mom drove over to visit me on the Payette. She hadn’t been in a kayak for years, and the discomfort and nerves of being out of a kayak for so long were chalked up in hesitation. But, 17 years after she sat me in a boat for my first time, I wanted to go kayaking with my mom. So, I borrowed a duo, and once again, sat in the back seat while she led down the river. This time was different in that I was the one coaching us downstream, but in many ways, it was the same. Someone snapped a photo of us that day, and upon seeing it, I was hit with the fact that I am so alarmingly my mother’s daughter. The smile tells it all. 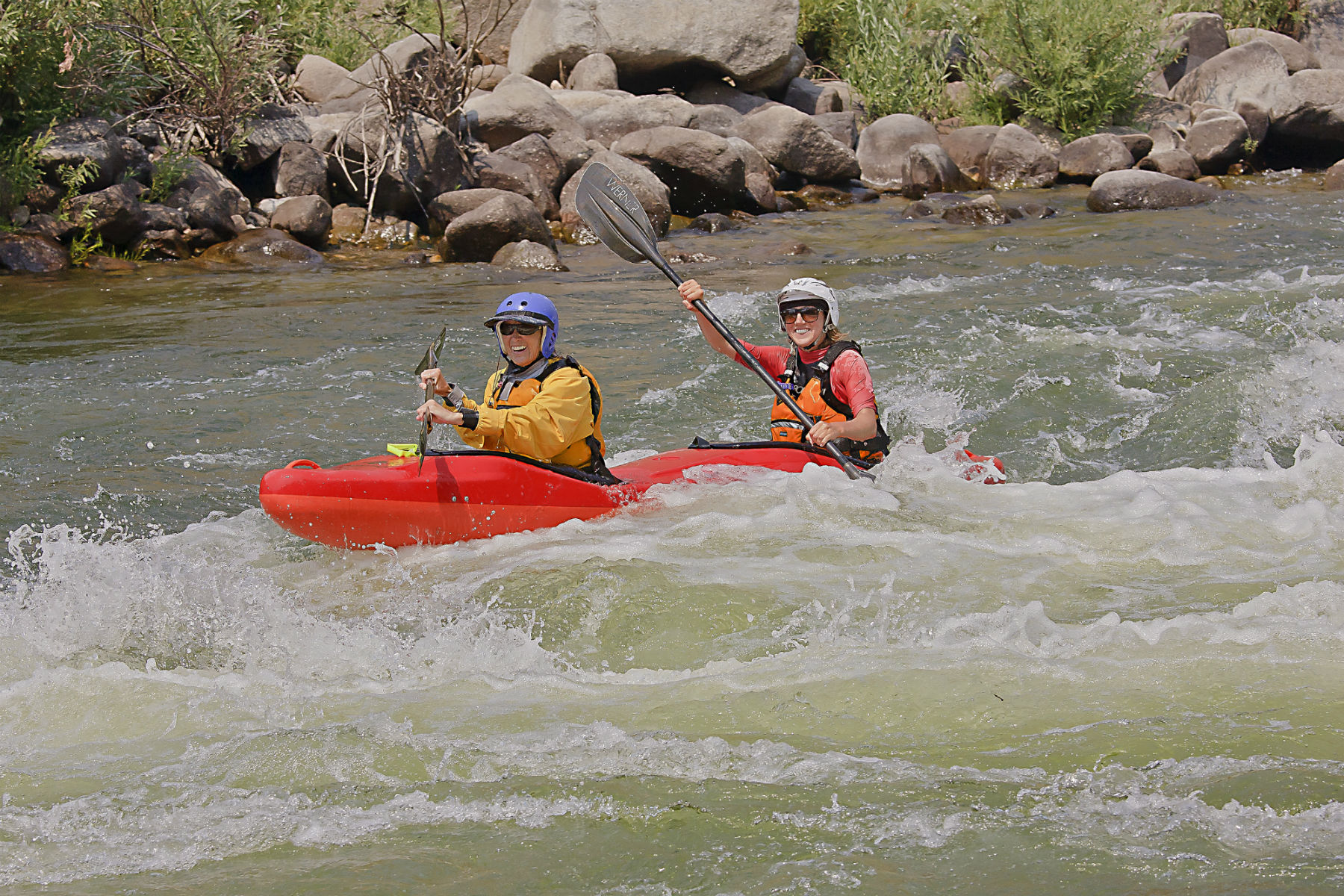 Today, I’m more likely to chase my mom up backcountry ski runs than big waves. But either way, I seriously can’t keep up. I dream of the day I’m 62 and can only hope I’m as fast as her. She doesn’t kayak much anymore, but when we do get on the water together, it continues to be obvious that a shared love of the water and getting splashed in the face by big waves is a common mother-daughter current. 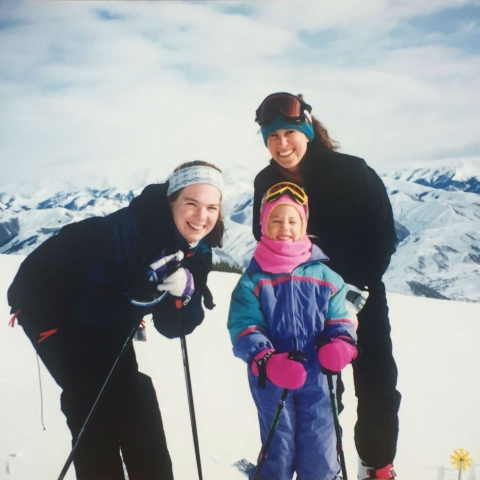 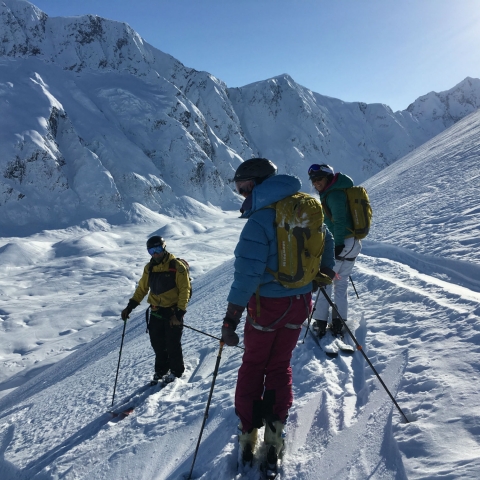 Ultimately, Kay Swift Tenney gave me one of the greatest gifts: the opportunity to learn from the river and to be part of the river community. It’s funny how as individuals on the lifelong journey of growing up, we have to learn most things ourselves, despite the great wealth of knowledge that surrounds us (maybe a better word than “funny” is annoying or stressful, but really it’s just life).

The hardest, most challenging, and perhaps best job in the world for all moms must be watching us “kids” learn how to navigate our boats through all the holes, eddies, and natural ups and downs of waves. The tools we find work best to be successful turn out to actually be those things that our moms told us a million times before, we simply didn’t listen. 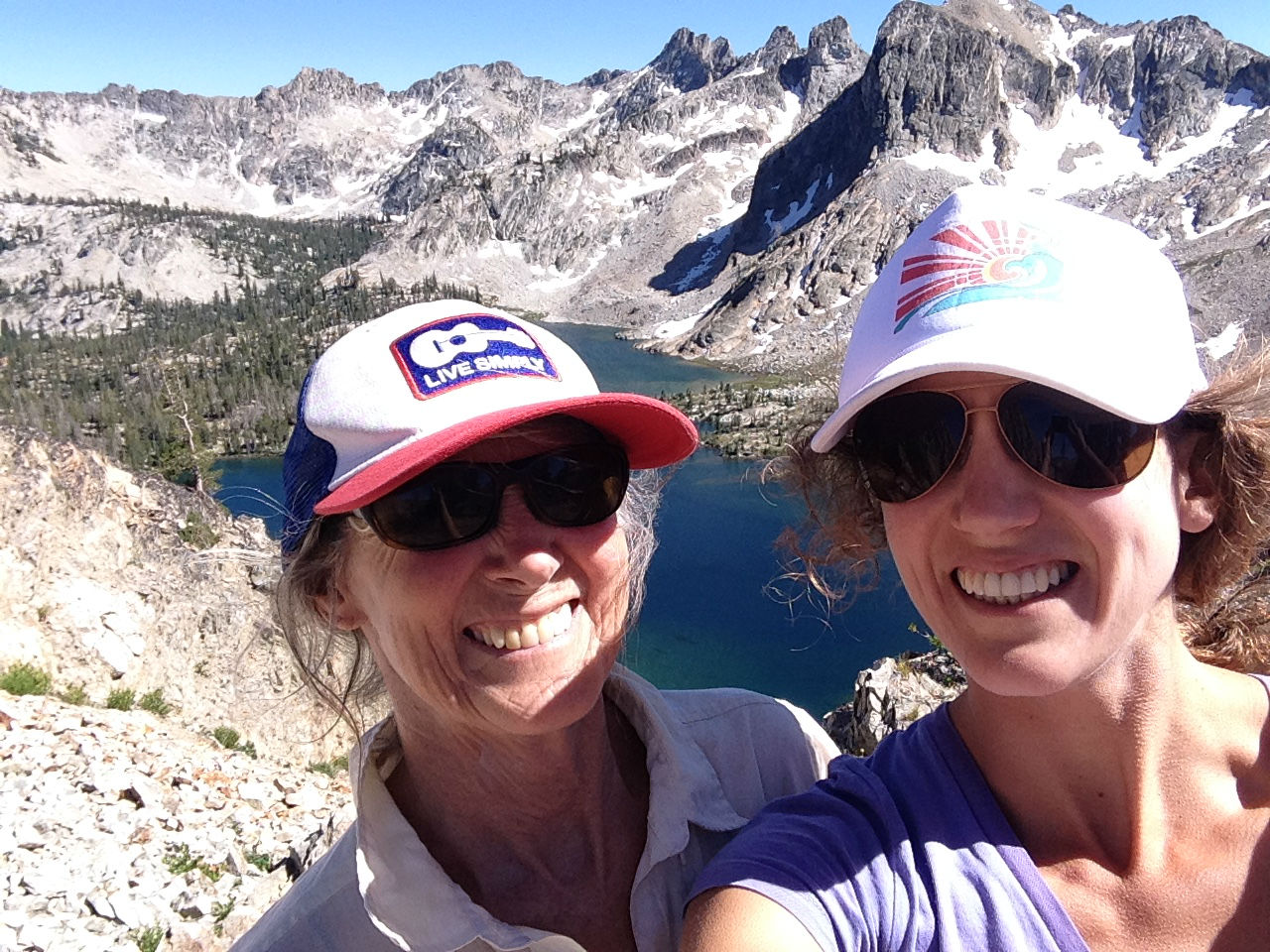 So, to my mom, boater moms and all moms: Thank You. Thanks for putting up with us, for supporting us, and for letting us find our own way. You only grow to inspire us more, as with every stroke downstream, our scope evolves to see beyond the horizon line. Thank you for giving us to the river. We love you. And, we’re sorry.