The Inspirations of a Kayaktivist

A dozen of us are scattered around a white sand beach on the Brook’s Peninsula in British Columbia dressing fresh caught salmon and ling, tending children, carving on a totem pole, taking a quick dip, tossing discs, or like Irene Skyriver, prepping the evening meal. Wearing a skirted shawl, Irene stirs a huge fire blackened wok full of rice and beans over a bed of hot coals, her raven hair twisted up into a bun, pierced with sticks and feathers but spilling out to frame a handsome, weather-seamed face. A pirate’s smile and flashing white teeth set the tone. About the size of a tall grasshopper, the girl looks as if she popped right out of Mother Earth.

I first met Irene when I moved to the San Juan Islands and got to know her better on month long kayak sojourns like this. A truly remarkable person, she is nevertheless modest and self-effacing and will no doubt blush when she reads this. 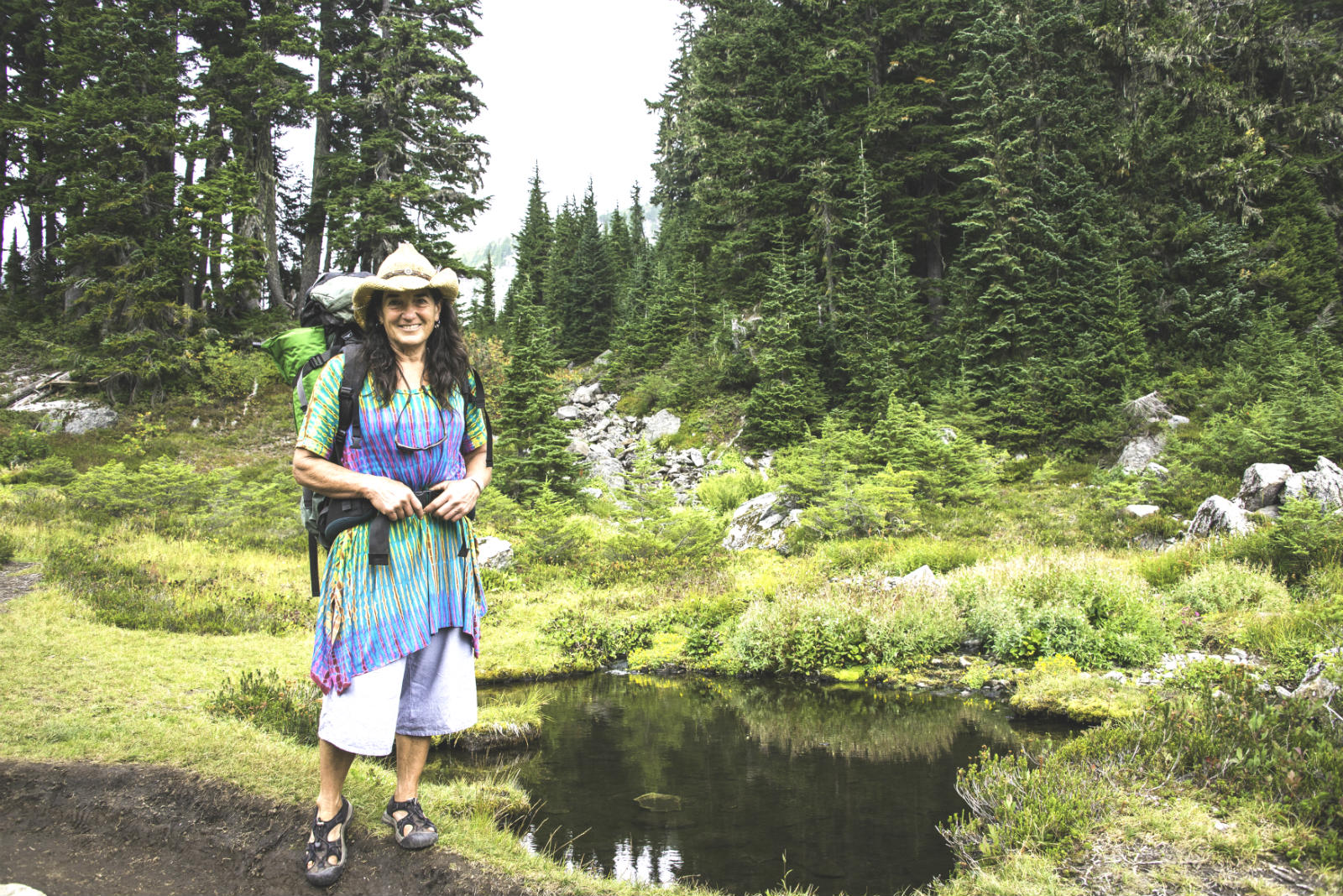 The girl gets around. A spark plug leader in a counter-culture community like ours, Irene is involved in a litany of events, rituals, barn dances, potlucks, care-for’s and go-to’s. She raised three kids as a single mom. Now there’s a gonzo garden (think Jack’s magic beans), Eponis, her speckle Appaloosa, and her two milk goats, Trillium and Gaia. Season that with road trips to the southwest and Mexico, riding race horses in Tibet, adventuring in Guatemala, Greece, India and Turkey, and of course, time with the six grandkids.

That might describe several people I know on the island, but when you walk your talk all the way to the Dakotas to stand with Standing Rock, join up with kayaktivist demonstrators in Seattle to give Shell Oil a second opinion, crush a multi-month solo kayak expedition from AK back to the island here and then publish a first book, an autobiographical novel—well, no one can compare to Irenie.

Recently, my wife and I had dinner at Skyriver Ranch with her, her husband Gregg Blomberg and a mutual friend. Afterward, I was inspired to sit her down and ask some questions to share to strangers and friends alike. 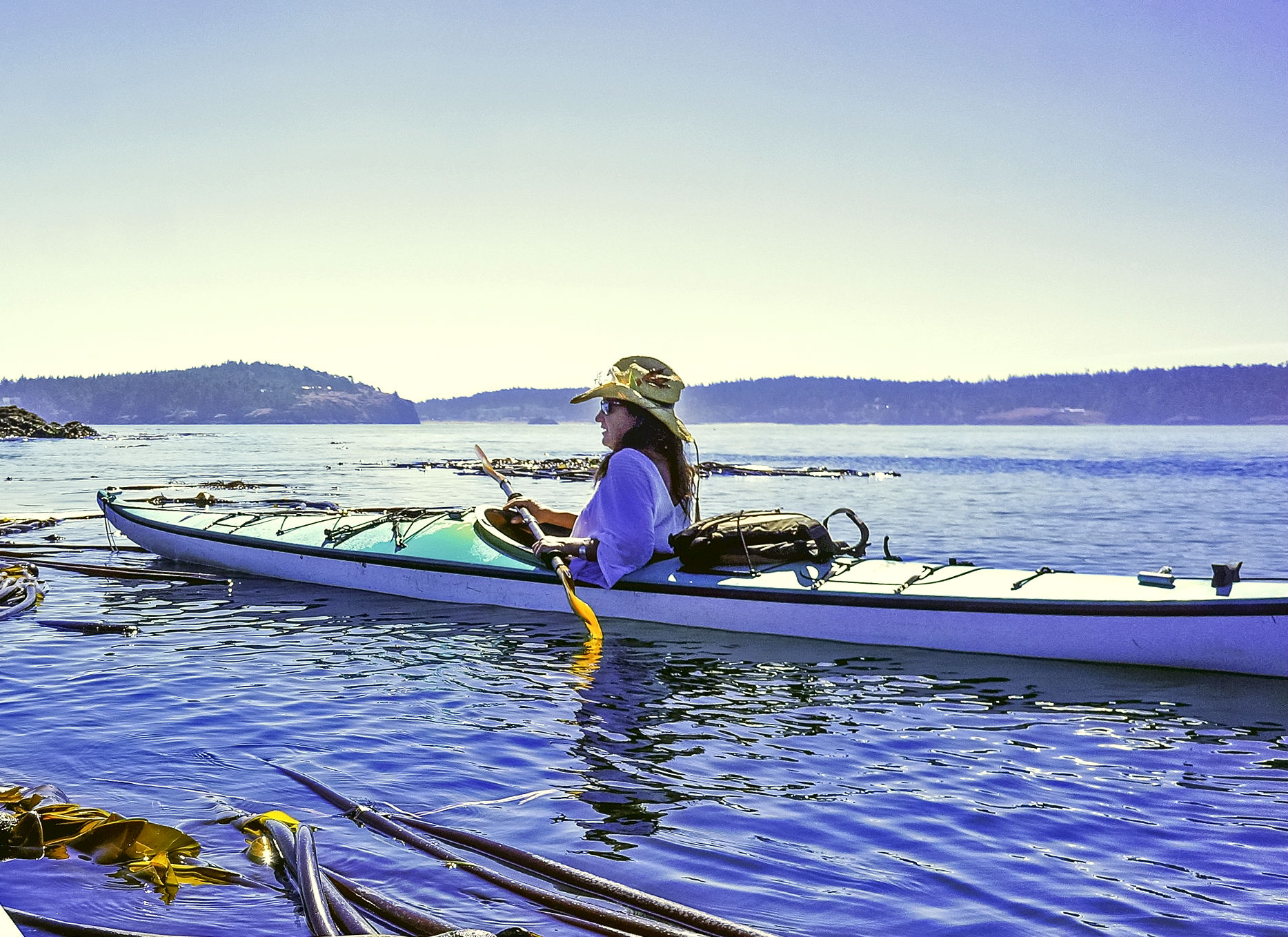 How did you get started as a kayaker and adventurer and who inspired you along the way?
My early trips to the wild northwest coast of Vancouver Island with my soon-to-be husband, made me want to spend the few extra dollars I had to buy my own kayak. I knew it would be money well spent. I also reasoned that the reality of living on an island made owning a kayak a no brainer. I could set out on even small adventures in every direction from the shores of my island home. If ever I should have no gasoline, or money or car, I could still have adventures. My dad was an adventurer. He’d fly every summer to Alaska in his own two-seater plane to find work as a mechanic. He was good at using his imagination to combine what he loved, with the work he needed to do, to support our family.

In an article I recently read about the Shell Oil rig demonstration in Seattle, the term ‘kayaktivism’ and kayaktivist’ were used. Could you explain what those terms really mean and how you see yourself among that kayaktivist community?
I have always believed in the philosophy of “EARTH FIRST!” And, true, kayaks are made of plastic, but the magnitude of environmental destruction is beyond quibbling over what vehicle we use to get ourselves to the frontlines in protest. Years ago, I voiced that I would paddle my kayak in front of the oil tankers when we first learned their plans for new departure ports, from just north of us, in the San Juan Islands. The pipelines were on the way! It has been a few years since those first warnings of increased oil tankers and now that reality draws much nearer. In the meanwhile, other fierce flotillas of activists have formed and I’ve had the empowering opportunity to join their forces: in Seattle to attempt to stop the Shell Oil exploration rig from departing to the arctic and here, closer to home, the kayaktivism that took place last year at the Anacortes oil refinery. Standing up against corporate powers, in a giant flotilla of kayakers, is just one more way to say “we are watching our waters and we will not allow the destruction of this ecosystem without a fight!” 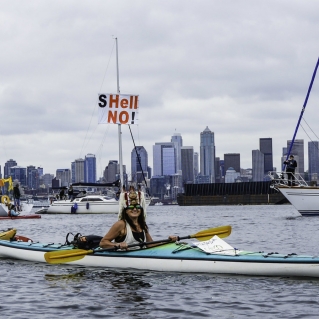 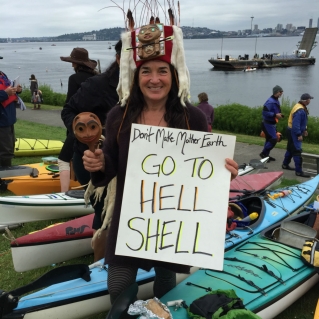 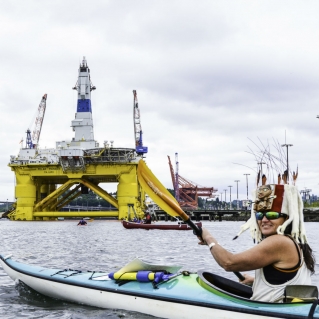 Then you ventured beyond where the kayak roams, to participate in the protest on the Dakota Pipeline. What made you decide to do that?
This same profound belief I have that the Earth is our Mother, led me to the Standing Rock Standoff in North Dakota, in the fall of last year. The voice of our Native American communities ringing out loud and clear to join their struggle to protect the waters of that region from Big Oil, was in my mind, quite literally and unquestionably a sacred obligation. I had to go.

As we are faced more and more with blatant truths of climate destruction, we will have no higher purpose than to stand in front of the “machine” (oil tanker, bulldozer, logging trucks, cell towers…) If I must die in battle, then, I’ll do so on my war pony—my kayak.

Tell us how your multi-month, solo kayak odyssey from Alaska back home to the San Juans influenced your life and ultimately your book— Paddling with Spirits: A Solo Kayak Journey—out later this year.
My primary job until I left on my solo paddle journey had been being a mother. I had single-parented for a dozen years since leaving a bad marriage at the age of 21. My obligation to my three children came first. At the age of forty, when it seemed my kids would survive even if I didn’t survive a solo adventure, I knew the time was right to go. I’m happiest of all in nature, having grown up in the country on the Olympic Peninsula. I craved to be in the wild! Before I left for Alaska, I paddled to a small island on a Spirit Quest. I received reaffirming signs in the form of the visitation of nine river otter that came onto my beach in the night and played right at my feet in the starlight. Otter would be my guide. 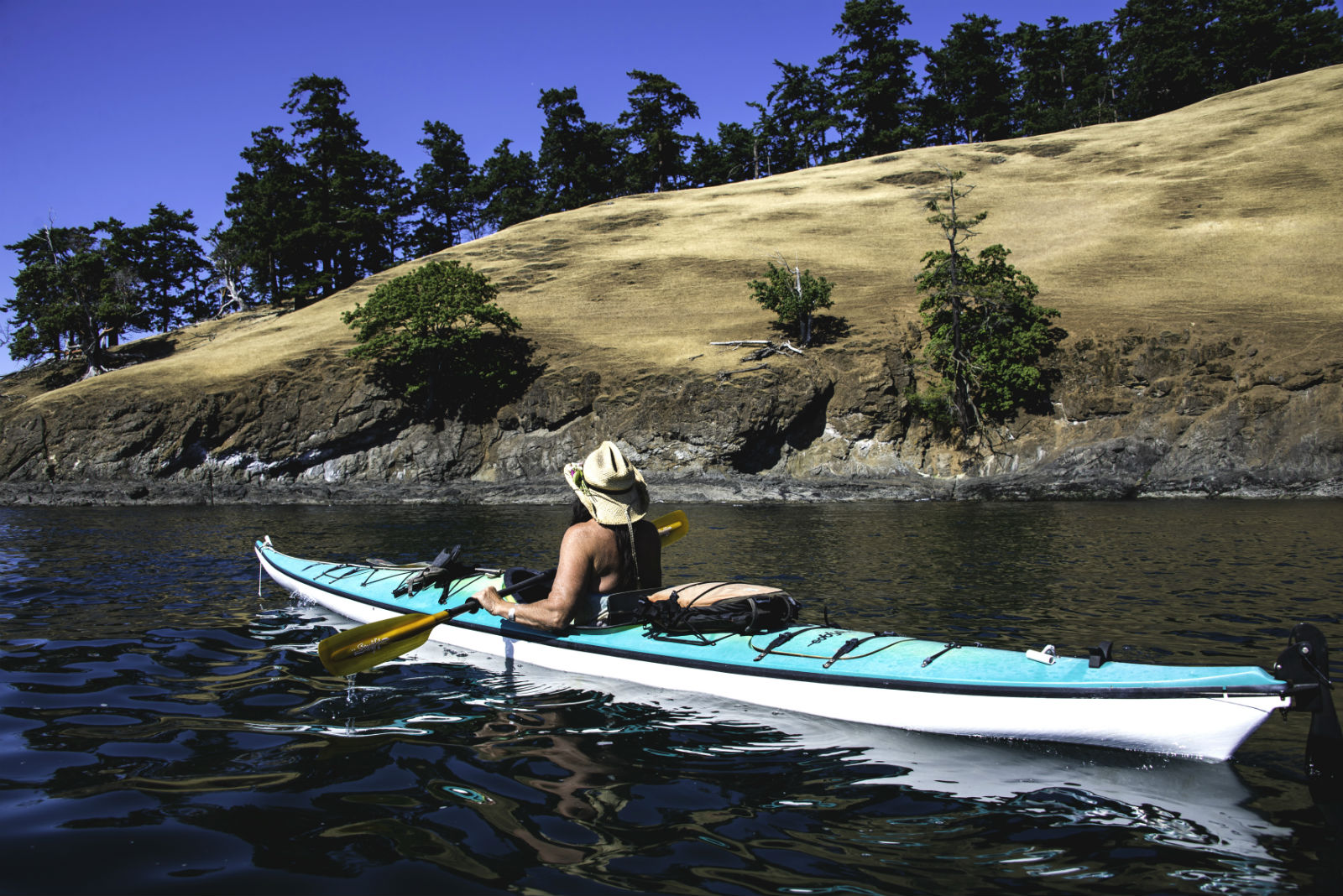 I’d have to say, it was my life choices before ever going on my solo that influenced my life and made me desire more nature – kayaking has given me the opportunity to immerse myself in what I’ve always wanted in my life and the solo was just the epic chance I allowed myself.

Many of my relations, of both my mother and father’s lineages, lived along the Pacific Northwest Coast. I was afforded a lot of time during my nearly 750-mile paddle to reflect on them and their lives. I deeply felt my connection to them and imagined their lives and struggles in more primitive times. We tend to think of ourselves as single units and yet we are really a part of a fabric made strong through our ancestors. With this understanding, I never felt “alone,” I truly felt guided by spirits and emboldened by “Otter power.” In my childhood, my father would tease me when I achieved some particular goal. He would say, “Not bad for a girl!” I always knew he was kidding about the “girl” part. He believed in me.

What is it about kayaking you love most, you know, if you had to boil it all down?
It’s my escape vehicle. I love to paddle and camp with family or even alone if nobody else can come. I love the close proximity to the water while at the same time, the design of a kayak, allows such confidence and security…and room for comforting accouterments! Kayaking is a self-powered, quiet, rhythmic, meditative form of travel that also happens to include the effects of wind and waves—danger and excitement—and the chance to catch a fish for dinner! 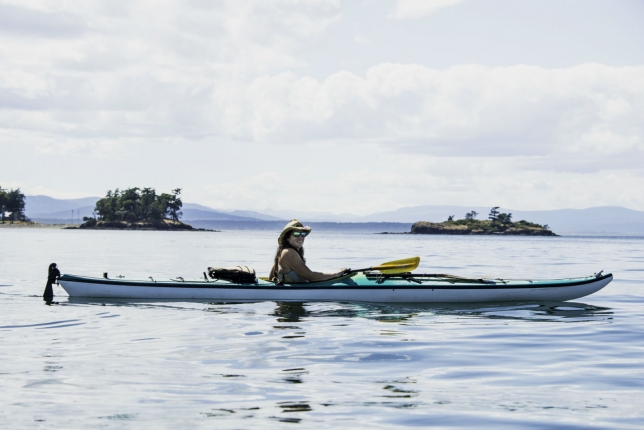 How do you see your role in the community as a paddler and activist and how do you hope to change the world using your kayak, your book and your personality?
I wish I could say that it were that easy to change the world by kayaking, however, in the sense that we can only change the world by setting a good example, thereby encouraging others, to follow their hearts, to go into the wild and ultimately to defend the wild—because you cannot protect what you do not have a heart connection to. If my book or love of paddling motivates even one person to step forward into their life and embrace themselves and the natural world, then that will be more than enough for me.

Editor’s Note: To learn more about Irene Skyriver, visit her site and be on the lookout for Irene’s book Paddling with Spirits: A Solo Kayak Journey forthcoming from Green Writer’s Press and available for pre-order wherever books are sold.