Unknowns: The River People You May Not Know

Some of the most inspiring stories originate from water. While we may be living in the age of GoPro updates and Instagram stories, there will always be countless tales hidden behind the smiles, bright eyes, and undefinable joy of those water writers, who unbeknownst to us, we see in the neighborhood coffee shop or office meeting room every Monday morning. The Unknowns are everywhere, but we’re blowing a couple of covers. 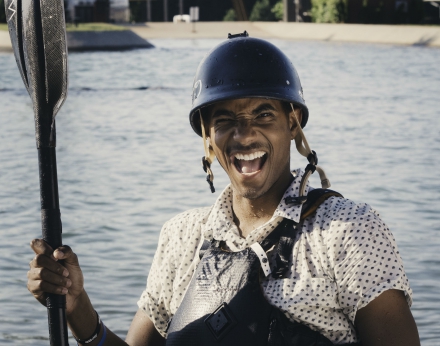 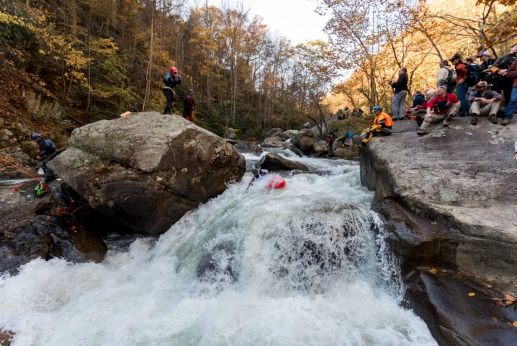 Rashid Clifton
Rashid was born and raised in the Queen City of Charlotte, North Carolina. For as long as he can remember, he couldn’t get enough of being outside; anything and everything was his playground. Skateboarding the city was what life was all about. He spent weekends on the Carolina coast and he quickly discovered his love of water when his Dad introduced him to surfing. Despite the four to six hour drive, Rashid would make the trip and chase every swell possible. When he turned 18, his high school photography teacher told him he should look into getting a job at the U.S. National Whitewater Center (USNWC) and it was there he discovered the world of whitewater right in his backyard.

“Jacq Truong who’s now the Raft Operations Manager at the USNWC, taught me how to roll while I was waiting for my carpool one day,” recounted Clifton. “The Whitewater Center is really cool because it made it possible to take advantage of the environment right where I live and from there, I got into kayaking because it fully resonated with me. I found a community that was really welcoming, fun, loves the water and loves nature, which is everything I love as well.”

“There’s so much to kayaking, but one of the things I love most is that the community built up around kayaking is one in which you could have never met a person before and you can come from totally different backgrounds, but immediately there’s a huge bond between the two of you. I also love the feeling that I get when I’m out in nature and isolated from the city; it’s really where I feel free. It’s amazing because on the river, you don’t hear any other sound than pure nature—no hum of a fridge or computer or sound of a car—that’s pretty rare these days.”

Having recently finished his undergrad degree, in between work at the USNWC on the weekends and work as a GIS tech support during the week, Rashid can be found flashing down his favorite run Mama Green. He does whatever it takes to make it happen to get out on the water; after all, really, with a little creativity it’s always possible to make time for everything you love. Twenty-three years old and interested in exploring un-run creeks, Rashid’s river story is clearly just beginning. 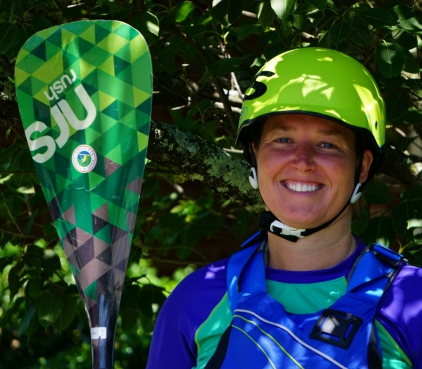 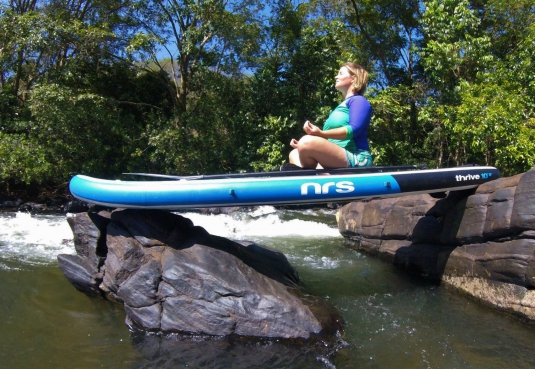 Heather Warman
Heather Warman: Executive Director at Kentucky Environmental Foundation, Citizen Scientist, and Mother to an exceptional 10-year-old daughter is also the co-founder and co-owner of SUP Kentucky. Heather started kayaking when she was 30, but later fell in love with stand-up paddle boarding. SUP provided her a means to get out on the river and feel the challenge of whitewater without the need to push the very real consequences of Class V, which she had been doing in her kayak. Having SUPed Mexico, Sri Lanka, and throughout the southeastern United States, Heather and her partner Aaron Koch decided to create an opportunity for more people to get into something that had given them so much right at home in Lexington, Kentucky.

Heather says, “SUPing is so easy to do, and the inflatable boards make it even more accessible with their stability, versatility and ease of throwing them right in your car. In our experience, women are really interested in this sport, even in our whitewater courses, which is really exciting to me. It’s great to see girls charging on whitewater and doing other things on the board too, and I love sports where women feel welcome. On a SUP, you can see women building more confidence and exploring other things with that confidence on and off the river.”

As the Executive Director of the Kentucky Environmental Foundation, Heather works at the intersections of the extractive industry and public health, specifically with Health Impact Assessments, and improved water and air quality for local communities. In a county with one of the highest cancer rates in the nation, one of the foundation’s current projects is working with local schools on the development and implementation of a curriculum on how to assess air quality, water quality, and the food system within the community. “It all connects,” notes Heather. For Warham, working to protect and expand SUP spots goes paddle for paddle on the river, at home and in the office, as she spreads the love of the sport. 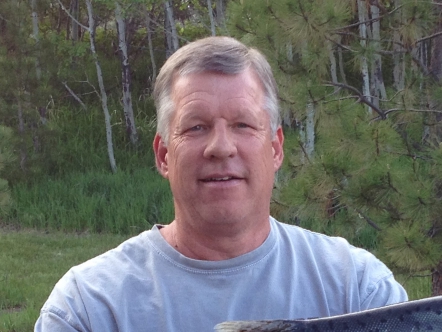 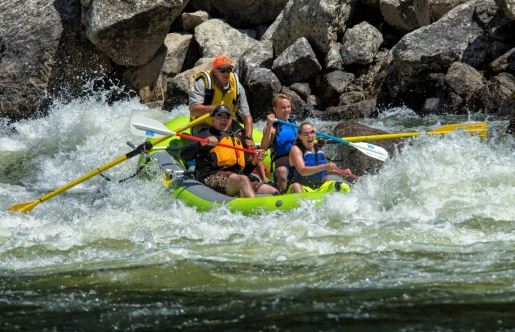 Alan Hamilton
It was the summer of 1980 and Alan Hamilton was fresh out of college when he moved to Moscow. It was in that unknown, northern Idaho mecca that Alan ran into some rafters, and was soon running the Lower Selway and the North Fork of the Clearwater, with day trips on the Riggins section of the Salmon sprinkled in. They rented boats from the University of Idaho Outdoor Program. “None of us knew what we were doing, but we were well outfitted with life jackets and safety equipment,” Hamilton recalls. “And I got hooked on the sport immediately. My first wave in the first rapid of my first trip was my first flip. I’ve loved rafting ever since.”

While working at a bank in 1983, Alan met Bill Parks who asked him to be the general manager of NRS, which Alan remembers, “was like putting a kid in a candy shop.” After a couple years of paddle boating, Alan’s first time on the oars was a Hell’s Canyon trip. Recounting days of the NRS Sprite and first Otter rafts, Hamilton distinctly notes running the Lochsa with one of NRS’s first self bailing boats and how much more fun it was not having to bucket out a submerged raft after every rapid.

After discovering Argonaut catarafts and meeting one of his future business partners, Kris Walker, Alan and Kris soon completed the first cataraft descents of the “Lower Five” of the North Fork of the Payette, and in 1987, completed the first ever cataraft “Top to Bottom.” Today, Alan still crushes the North Fork. In his humble opinion though, Alan says, “After 35 years, the river is mostly about enjoying being out there with friends and family… and the beauty. And of course I’m enjoying every bit of whitewater. It’s like an amusement park ride you don’t have to pay for—once you get equipment of course.” 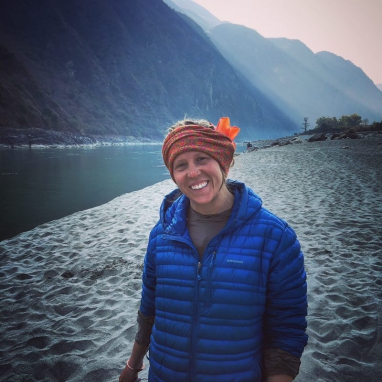 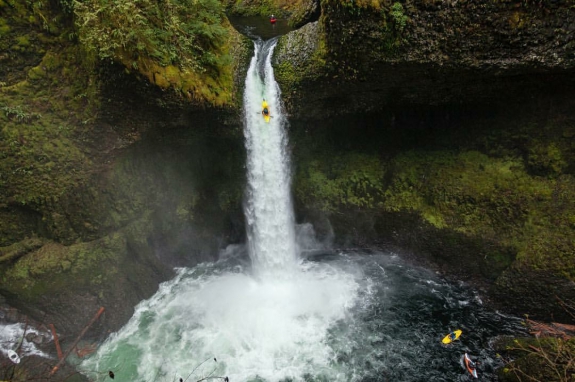 Anna Wagner
One of Anna’s nicknames is Wag-GNAR, and rightfully so. The 25 year old smiling, giggling, charging young woman has kayaked in Nepal, Zambia, Costa Rica, New Zealand and China (to name a few). She’s run Metlako Falls (a waterfull in Oregon who’s recorded height is of heated debate ranging from 82-101 feet) and is the first and only female photo kayaker on the Tuolumne (one of the most challenging commercially rafted sections of river in the United States). But after all of those accomplishments, Anna has no problem being humbled by 12 year olds in the exploration of learning how to race slalom. She’s someone you meet and no matter what she’s doing, you know she’s someone who has figured out how to do life right.

Wag-GNAR was born and raised in California, and her backyard river was the South Fork of the American. Her Dad was a raft guide on the Gauley, and the river has been a family hobby since the day Anna was born. She remembers that, being pretty scared, she refused to go on the river in a kayak until she had a super solid pool roll. When she completed her first class 3 stretch at the age of 16, she was hooked. While initially chasing her Dad and brother, Anna is now the one being chased. Runs on Cherry Creek before work or doing overnighters on the Class V Merced for a weekend are the norm for an Anna Wagner summer, then she’s off…to somewhere.

“The simplicity of staying on the river and only having kayaking to worry about is the best. It sounds so cliché, but the people that you meet are so unpredictable and amazing and the places kayaking takes you are unparalleled—you can literally only get there in a kayak. There are so many unknowns on adventures and I love that.” But being a top tier kayaker on extreme rivers wasn’t enough for Anna and a couple of years ago, she bought a slalom boat and researched places and programs where she could train because she simply thought it would be fun. In New Zealand (while not on heli-trips to challenging, remote creeks), Anna claims she had 12 year olds kicking her butt on slalom gates. On the Kaituna river, Anna remembers one such young lad saying to her during a practice session on Class I/II one day, “I’m so glad you’re here. I’m not allowed to paddle by myself.” Off the gates, Anna shares her love and expertise of the sport. She has taught for Girls At Play in Costa Rica and with Last Descents in China. One thing is for sure, once you meet this unknown river girl, you’ll never forget her.