Looking up from my paddle board, the landscape surrounding me looked like the Colorado Rockies, the Amazon Rainforest, and some scene from the movie Avatar had all collided into one awe-inspiring backdrop. Kauai’s Nā Pali Coast, a rugged gem on the northwest corner of the island, is only accessible by foot along the Kalalau Trail, or by water vessel. The 17 miles of road-less coastline is some of the most scenic and wildest country I’ve ever laid eyes on.

My wife, Megan, and I have hiked the arduous 11-mile trail twice before. Kalalau Beach, a mile-long white sand paradise at the base of 3,000 foot emerald peaks, is the farthest point you can travel by foot. On one of those trips, while hiking the long, steep, variable trail, I remember looking down at the turquoise water at a couple paddling a tandem kayak with deep envy as my backpack straps dug into my sunburned skin and sweat dripped from my body like an over-saturated sponge. 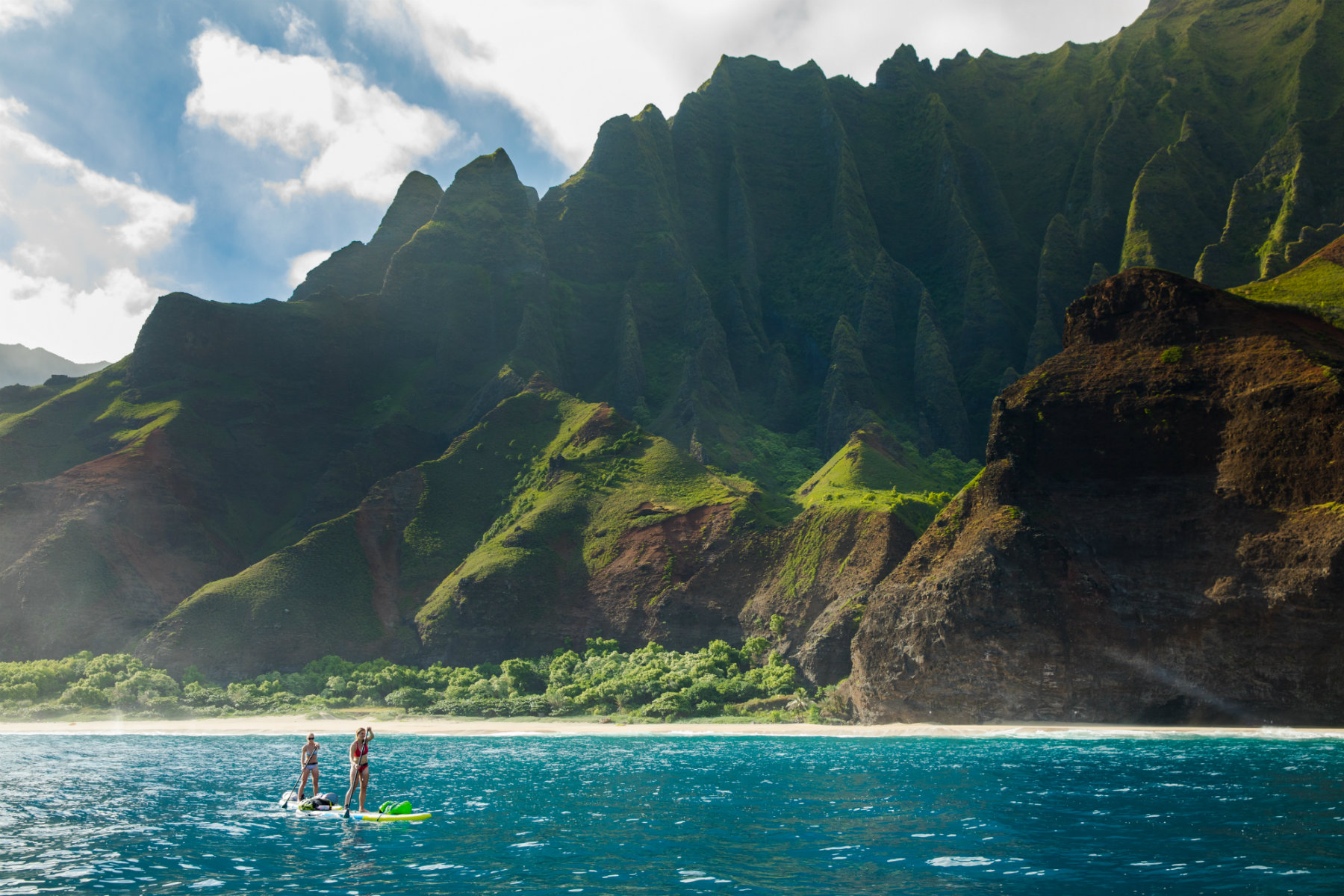 Fast forward seven years later, and we were back in Kauai with four other friends from Montana at Ke’e Beach (the starting point of the Nā Pali Coast and the end of the road). This time, we ditched the backpacks and hiking boots in exchange for dry bags and Chacos. Our plan was to paddle the 17 miles of open ocean split into three separate days with two nights camping. The first day we would make it to Kalalau Beach, the following day to Miloli’i (a boat-only access and primitive camp), and then finish the rest of the way to Polihale the next day (road access from the SW side of the island).

After hiking the coast twice, and now finally checking the Nā Pali SUP tour off of my bucket list, here are five reasons you should consider paddling the coast instead of prodding along the grueling Kalalau path on foot. 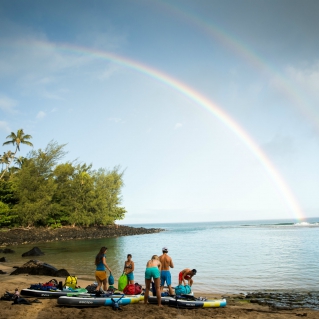 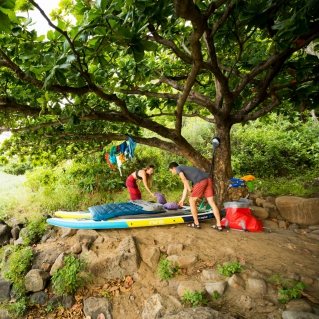 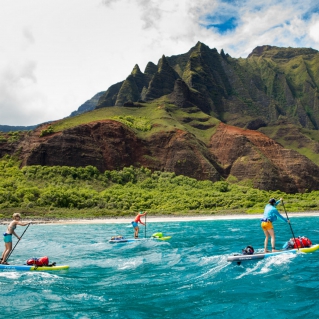 Beer…Enough Said
Strapping a 24 pack of coconut porter to the back of one of our paddle boards, we chuckled thinking about how conservatively we had packed when we knew we would feel every ounce of weight with every bounce of our pack. Needless to say, we were the envy of the camp as we dined on curried rice and kale topped with smoked salmon, washed it down with a coconut porter and finished off with some banana bread for dessert. Carrying all your gear on the paddleboard opens the doors for culinary creativity miles beyond Mountain House. 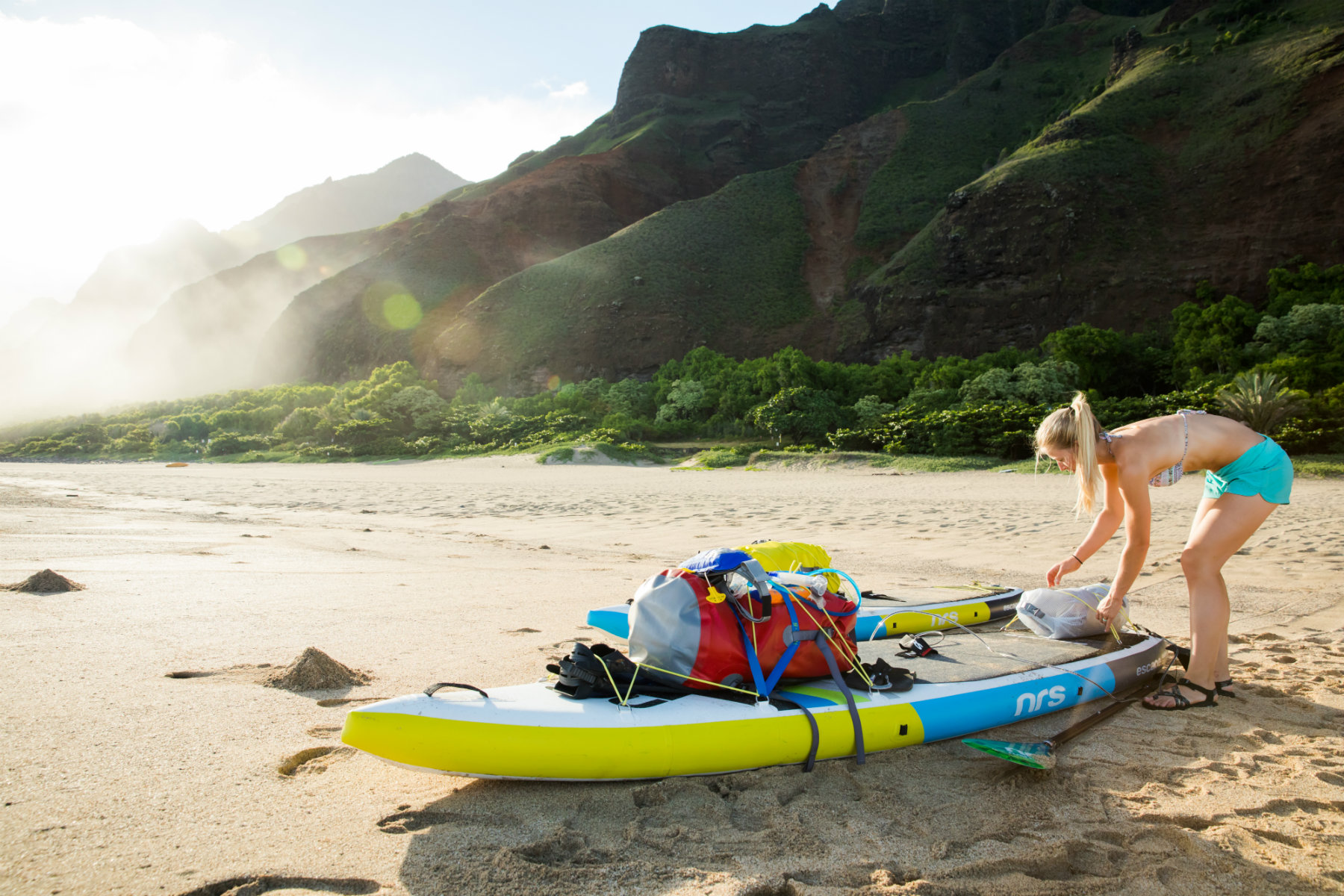 There Are No Dolphins on the Trail
At one point of our three-day excursion, we found ourselves surrounded by a pod of over thirty spinner dolphins. Watching these playful creatures cruise around us was one of the highlights of our trip. Aside from the wildlife, the vantage point from the water allows you to see every curve of the truly amazing coastline. We were able to explore sea caves, view waterfalls that flowed straight into the ocean, and stare at countless knife-edged cliffs shimmering green as the sea mist rose up their flanks. Traveling by water certainly ups the level of adventure as well, especially coming from a landlocked state like Montana. With ocean swell, wind chop, and unsteady seas, we found ourselves thoroughly out of our comfort zones simply trying to stay upright on our boards as we paddled along. 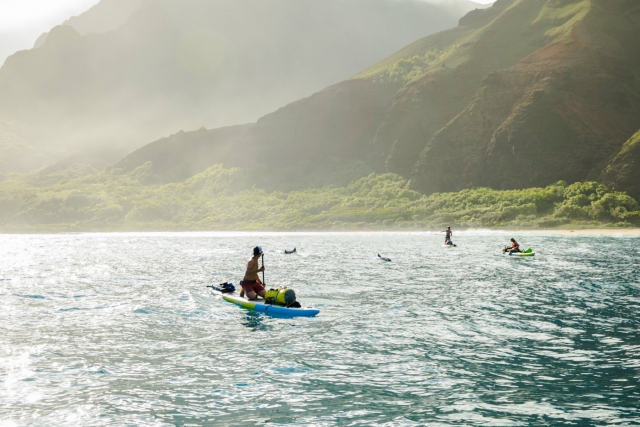 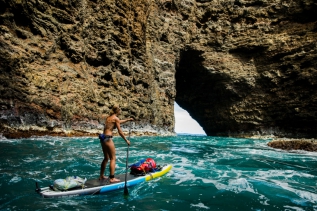 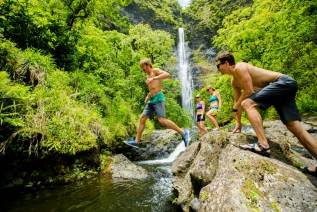 Your Board is Your Bed
Sleeping out under the stars atop an inflatable SUP listening to the waves crash against the sandy shore was nothing short of magical. With very few mosquitos or bugs to worry about, we were more than cozy with a light blanket, small sleeping pad, inflatable pillow and a sheet. It felt as though we had checked into a backcountry Ritz Carlton, all I was missing was a mint on my pillow. Deflating the SUPs just a bit allowed for a very comfortable night’s sleep and a bed I will never forget. 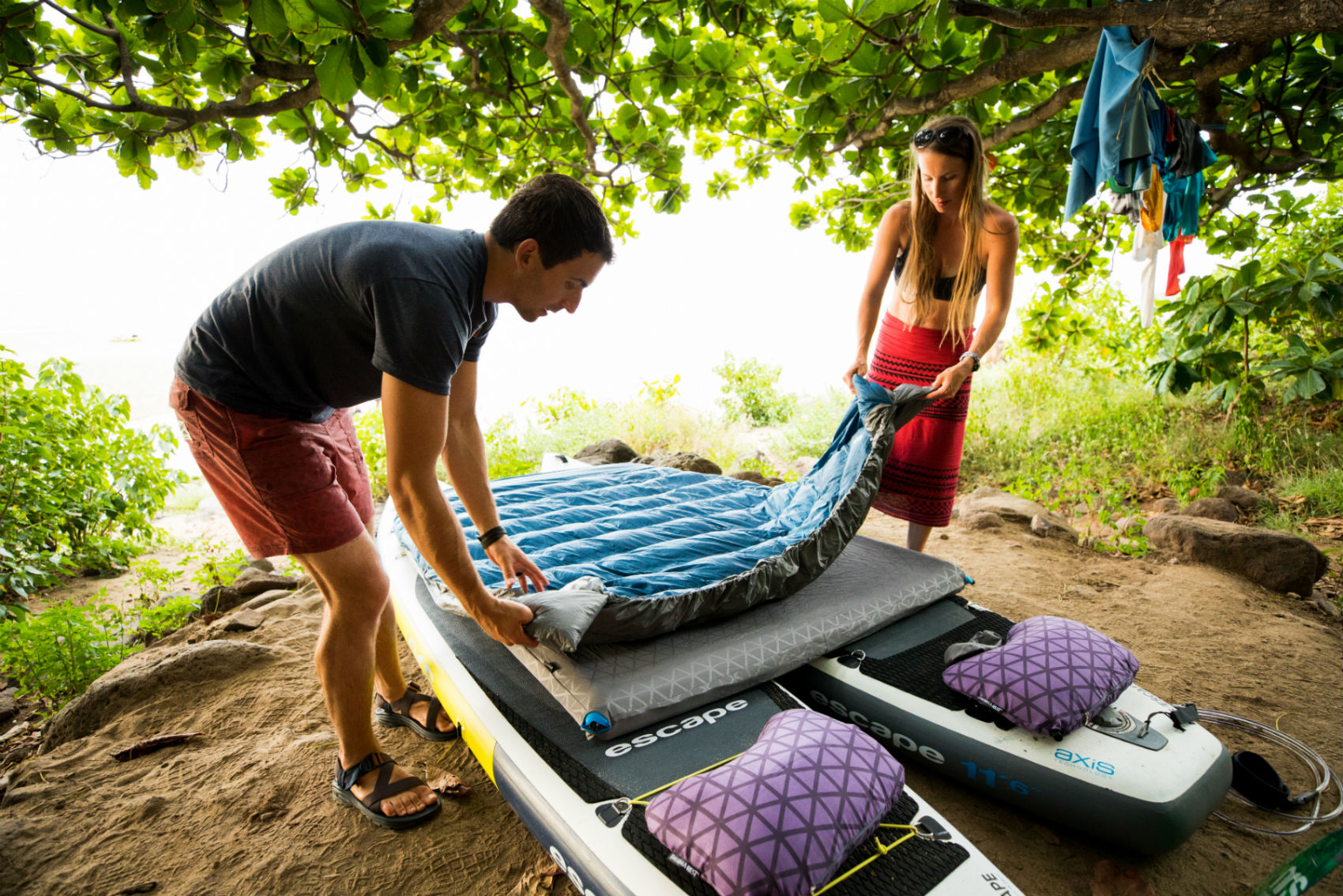 Nothing but the Wind and SPF 30 on Your Back
Hiking the Kalalau Trail is no easy feat in and of itself. The trail twists and turns following every curve of the coast as well as gaining and losing elevation seemingly around every corner. Add in a heavy backpack, sprinkle in a little rain, and it becomes downright difficult. With a couple creek crossings (often times impassable after rain), a few lengths of exposure that will put a knot in your stomach, the trail lives up to its reputation as one of the most dangerous trails in America. I cannot express the depth of satisfaction I felt while paddling with all my gear aboard, and nothing but the hot Hawaiian sun and wind on my back. The open ocean certainly comes with its own set of dangers and difficulties and should not be taken lightly, but paddling your gear versus carrying it on your back wins in my book every time. 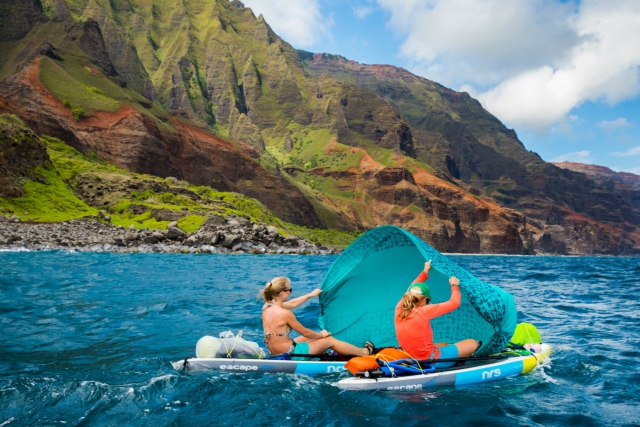 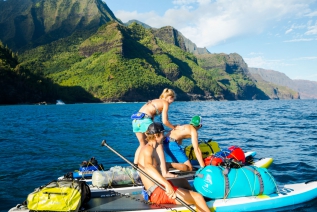 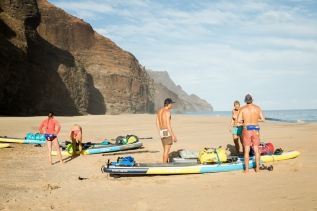 Accessing the Magical Miloli’I
For everyone hiking the Kalalau Trail, once they hit the sand at the end of their hike, that marks the furthest point of their adventure. Those who paddle have the option of completing the coast all the way to Polihale Beach, or stopping at the lesser known Miloli’I. This backcountry site is only accessible by human-powered watercrafts, and like Kalalau, requires a permit for camping. It offers a couple of composting toilets, an outdoor shower, and water piped right to your camp (must be filtered before drinking). There are only a handful of sites, but snagging a permit for this camp is typically easier than Kalalau since you don’t have to battle any backpackers for spots. There’s an amazing waterfall hike up into a tight canyon and a pleasantly sleepy beach that offers an even greater level of solitude. 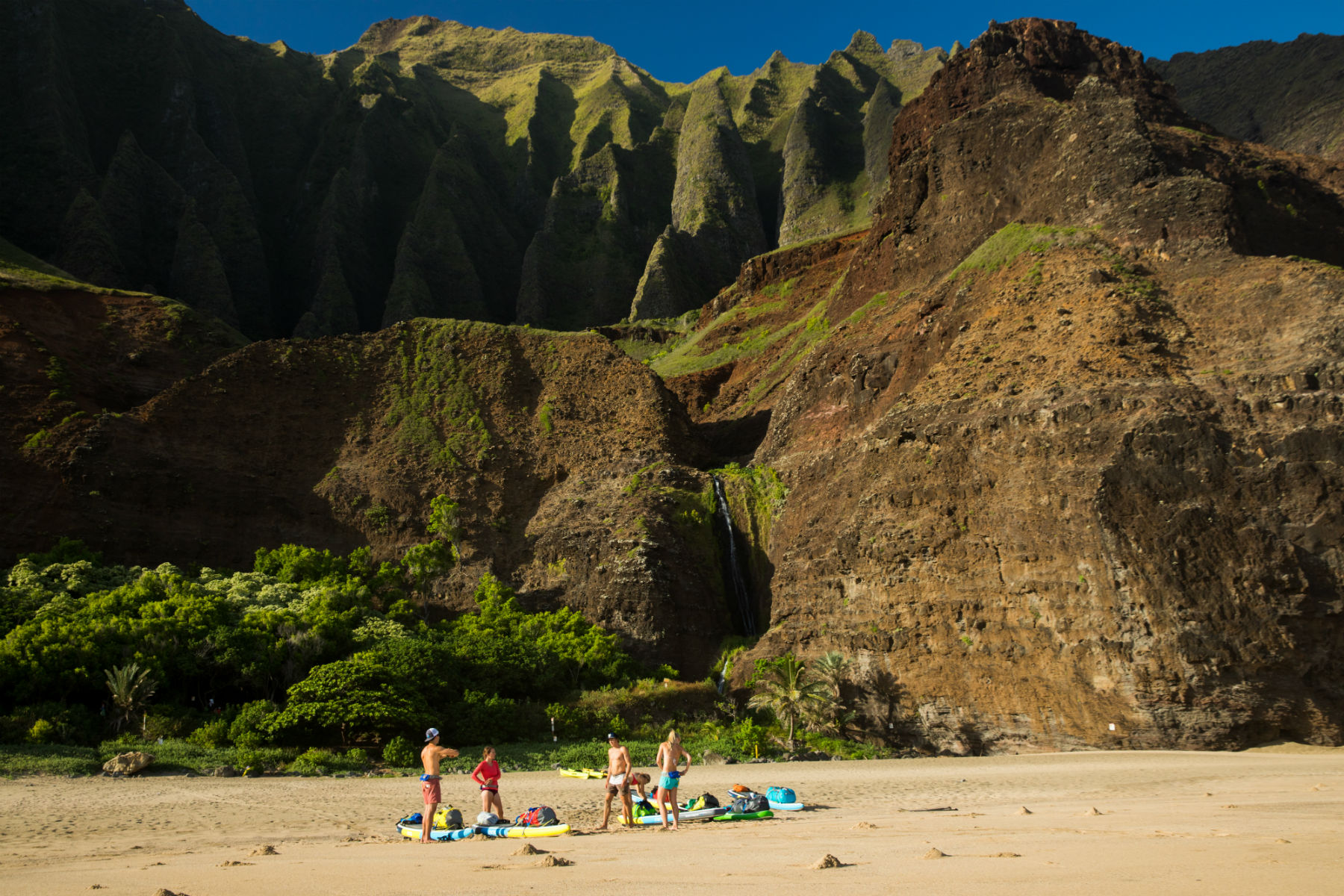 Regardless of your mode of transportation, if you find yourself on the Nā Pali Coast at all, you’re already winning. I’ve talked with people who favored the hike even after completing the paddle as sometimes the ocean doesn’t cooperate with our plans. These 17 miles of ocean possess a strong current, making it impossible to paddle back, so it’s rather committing when you leave the sand at Ke’e beach. As with any adventure, doing your homework, coming prepared, and keeping an open mind is paramount. If it’s not already, I highly suggest adding this paddling adventure to your bucket list.

Editor’s Note: Guest contributor Noah Couser is a professional photographer and health teacher who works to inspire people to connect with the outdoors through recreation. He lives in Whitefish, MT with his wife and son. For more on Noah’s adventure along the Nā Pali Coast, check out his photo essay in SUP the Mag.