It was the night after the preliminary round at the Freestyle Kayaking World Championships in San Juan, Argentina. I was having a celebratory dinner with my parents after placing 5th in prelims, guaranteeing myself a spot in the quarterfinals round, and all around exceeding my expectations for this competition. Per usual, the conversation was centered on what everyone was ordering for dinner.

Mom wanted a salad but retracted her decision when she remembered her travel nurse at home had warned her to avoid eating uncooked vegetables while traveling in South America. Apparently, the cook could have used the bathroom, not washed their hands, and then handled the vegetables, thus providing us weak-stomached Americans with an easy vessel for eating poo. With many international trips under my belt, I considered myself a very experienced traveler. I gave her a snarky reply, something along the lines of, “You can’t always be in fear of getting sick while traveling. At some point, you just have to live your life.” I then proceeded to order a cheeseburger accompanied by a giant green salad.

My late fall/winter schedule was hectic. After world championships, I returned to the States for four days before flying to Uganda to spend three weeks training for Unleashed, a multi-stage, invite-only competition on the massive whitewater of the soon-to-be-dammed White Nile.

I competed in Unleashed last spring in Quebec and was fairly happy with my performance, however, due to my lack of experience paddling steep creeks, I had decided to sit out of one of the competition stages. This time, though, there wouldn’t be a creek race. I had spent the previous month training for and competing in world championships, and the six months before that paddling full-time on the big water of Quebec and Ontario. I was strong, confident, and paddling better than ever before. My first day on Nile Special was incredible. I was in a new-to-me carbon boat and I felt like I was flying. In my second ride, I stuck the biggest head-dry airscrew of my life. My stoke level was through the roof. 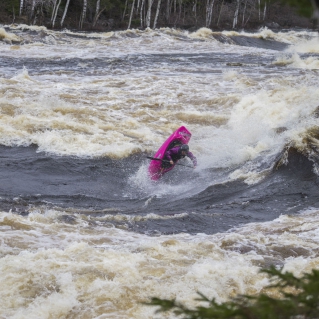 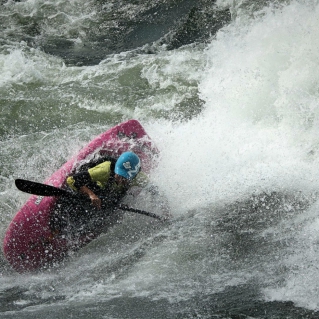 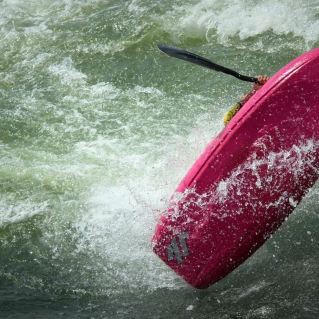 That night it hit me. What ‘it’ was wasn’t immediately evident. At first, I thought it was just a case of travel diarrhea, which is something I, unfortunately, have experience with. The next morning, I forced a bit of breakfast down, popped a Pepto Bismol, packed a bit of toilet paper in a drybag, and headed to the river. I live by a set of rules to keep myself healthy enough to kayak and safe enough to guarantee I can continue to kayak in the future. But I love kayaking so much that I sometimes follow these rules with a white-lie-kind-of enforcement. One of my rules is that if I’m too sick to eat, I’m too sick to go kayaking. But I don’t differentiate between the ability to eat a full meal and ability to force down a piece of toast, so since I had been able to eat a bit of breakfast, I gave myself permission to paddle.

Turns out, I wasn’t. It was in the first stretch of flatwater that I noticed the sickness again. I was doubled over as close to the fetal position as I could get while still in a kayak, with my friends holding my boat for stability in case I needed to chunder my guts out over the side. I managed to get through the whole river run without polluting the water or riverbanks, then immediately crawled into my tent.

I laid there, in the fetal position, for the next two days.

By the third day, when I finally decided to get a taxi to the hospital, the small hill separating the bathroom from my tent was my nemesis. Never before had I struggled to find the energy to walk 20 feet up a small incline.

No one wants to visit a hospital abroad, especially in Africa. A friend helped me walk into the building as tears streamed down my face. A nurse took my vitals, drew some blood and hooked me up to an IV of fluids and anti-nausea medicine. I pooped in a cup and tested positive for Typhoid. I was given two types of antibiotics and sent home. Yes, that’s it. 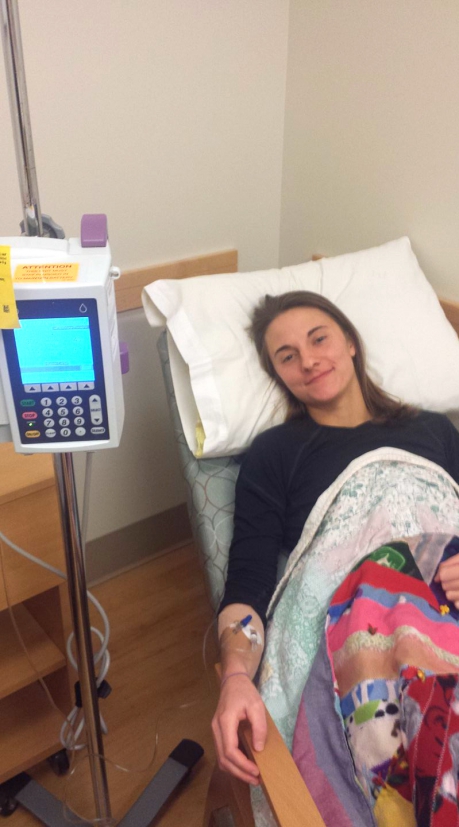 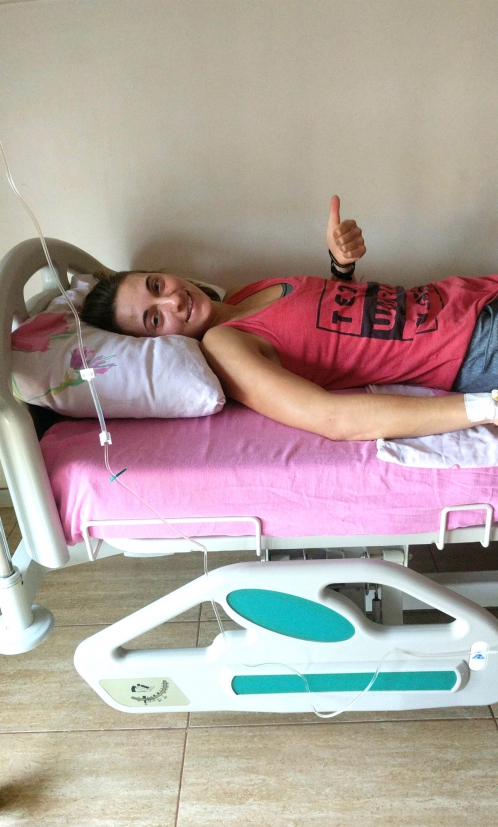 I wasn’t told until a week later that it’s possible to test positive for Typhoid just by having been vaccinated. And I had been vaccinated. In addition, 40% of prescription drugs in Uganda are fake. I don’t know if I truly had been infected with Typhoid or if the antibiotics I was given were a knock-off, but I grew sicker. I eventually moved out of my tent by the river and into a hostel in Jinja that was a block away from the hospital. My daily activities for the next five days included lying fetal in my bed, lying fetal on the couch, and lying fetal in a hospital bed. My lowest point was the moment I realized I needed a taxi to get to the hospital. I wasn’t capable of walking that one block without passing out.

The doctors I saw weren’t sure what to do with me. The treatment for typhoid didn’t work, so the next step was to treat aggressively for parasites. By my third hospital visit, I had lost 20 pounds. I needed more help than what I was getting. I called my parents and explained my situation. In the midst of my parent’s panic-stricken plans to fly to Uganda to fetch me, or better yet, my 90-year-old grandpa offering to fly over and help, I was able to think rationally enough to mention travel insurance, which agreed to reimburse all travel expenses for a next-day flight back to the US.

This is probably obvious, but the flight home was hell. I hired a porter to carry my bags through the airport and switched seats on all my flights to be on the aisle with easier access to the bathroom. I stocked up on anti-nausea medicine and sleeping pills to make the long flights a bit more bearable. 37 hours later, I arrived home in Montana. When my sister offered to carry my backpack, I had to decline. The waist strap was the only thing keeping my sweatpants from falling off.

An infectious disease specialist at the hospital in my hometown advised me to finish out the course of anti-parasite medication I had been given in Uganda, since I appeared to be improving a bit. But after only a week of improvements, I kneeled down one day to fetch something from a bottom cupboard and couldn’t stand up. My mom had to pick me up off the kitchen floor.

The one thing that makes me happiest in life is setting goals and working hard to achieve them. I had set three goals for Uganda: 1. Compete well in Unleashed; 2. Perfect my airscrew; 3. Learn a combo trick. Instead of doing any of these things, I was back home stuck in bed, unable to even care for myself, much less think about training for anything. I would stalk my friends’ Instagram accounts and get jealous when I saw them throwing big tricks on Nile Special Wave. I had an unhealthy amount of FOMO, and it wasn’t helping my body heal. I eventually turned off all social media in an effort to ease the negative feelings. I didn’t want to see photos, videos, or anything relating to kayaking.

One more failed oral antibiotic and one more relapse later, I ended up back in the hospital hooked up to an IV pumping fluids, antibiotics, and anti-nausea meds. Luckily, after five infusions and one allergic reaction—turns out I’m allergic to Zofran— and once  I could feel my face and arms again, the IV antibiotics finally worked. For a full month and a half, I survived on plain rice and applesauce. Then, I ate an avocado. The next day, I went for a walk around the block. A week later, I walked up a small hill. The day I ate an entire hamburger without returning to the fetal position was cause for legit celebration. I’m still not sure if my stomach will ever be able to handle dairy or wheat products again, but at this point, I’m just happy to be eating something other than plain rice.

Even though the initial illness is gone, after five courses of oral antibiotics and five days of IV antibiotics, my stomach is still a disaster waiting to happen. The diet my stomach can handle right now is strict: no gluten, no dairy, no sugar, no beans, no cashews, no peaches, no honey, no coffee, no alcohol—you get the idea. Anything you can think of that’s fun to eat, my stomach can’t digest it. The one thing I’ve found easy to digest is protein. I’m eating steak for breakfast, steak for lunch, steak for dinner. My stomach digests it with ease, and I’ve gained back 6 of the 22 pounds I lost. Sorry to all you vegetarians and vegans out there, but I’m loving the meat diet right now.

Being so sick for so long has left my body feeling weak and vulnerable. I’ve always taken pride in my ability to do 20 pull-ups in a row, and who knows how many push-ups. But my first few days back in a boat I would get winded just taking slow strokes in flatwater. My confidence in my strength and my paddling is low. Additionally, anytime my body experiences stress or nervousness, my stomach acts up and puts me back in bed in the fetal position. Building my strength and confidence back to the paddling level I was at in San Juan is a challenge I’ve never had to consider before. But the first day I sat back in my kayak, I knew all the hard work I will have to put in will be worth it. I never imagined I would find so much joy in being able to do a single push-up, or how big my smile would be running my first class III wave train nearly three months after getting sick. Yesterday, I did my first full class III/IV river run without having to stop for a nap on the riverbank, and for the first time in over three months, I felt like a normal person.

I won’t sugarcoat it, that trip to Uganda sucked. My doctors are fairly certain I contracted the bacteria in Argentina. And yet, at this point, my doctors aren’t even 100% sure I was infected with Typhoid. What I do know is I’ve never been sicker in my life. Through battling Typhoid (or non-Typhoid), I’ve learned to maybe heed food warnings a little more seriously in the future, and that travel insurance, although 99% worthless, comes through big when you need it (and you can never predict if you need it), so spend that extra 100 bucks. But most importantly, I’ve realized that no matter what I’m faced with my body can heal and I can get back to where I was, whether that’s in kayaking or simply in life. It might take months, or even years before my stomach will be healed enough to handle another paddling trip to a developing nation, but the rivers are already calling and I can’t wait to get back out there.