Northern New York has always been known for a handful of super classic rivers, most featuring big drops and even bigger pools to paddle between rapids. But much like the rivers that frequently get overlooked until New York’s Secret Season, there are a plethora of micro-creeks with unassuming put-ins and take-outs that disguise their true nature. Below are just a handful of streams that become excellent season openers as spring rains begin to fall and the snow finally starts to melt. Although, if spring caught you off guard or conditions (and life) just didn’t line up, keep your eyes on the gauges in June. Heavy rain frequently flashes these tiny creeks up for a few hours at a time. 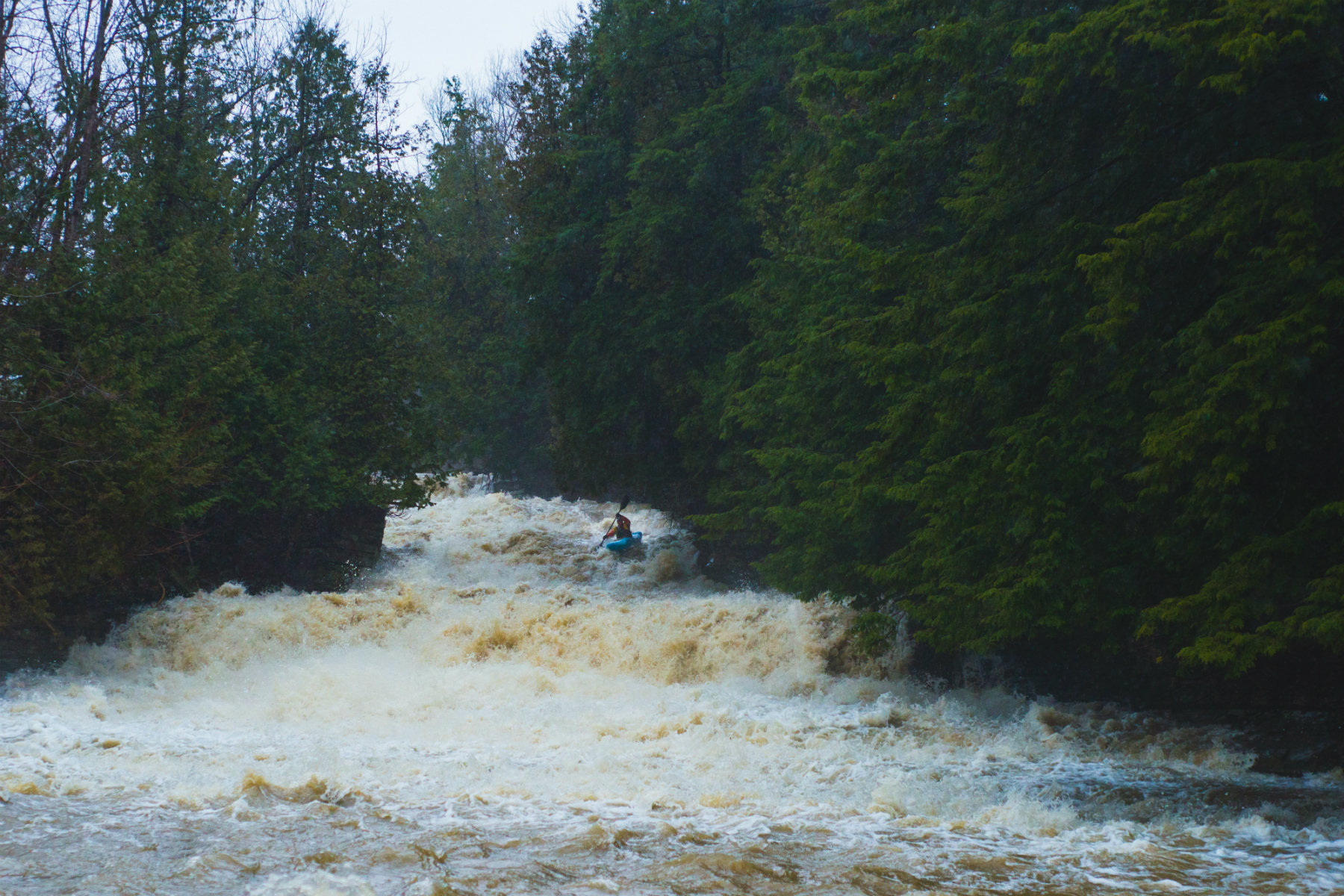 Unlike most of the other stretches on this list, Roaring Brook is becoming a very well known stream, although it’s most often known by another name: Brokeback Gorge. While the ultra committing Class V+ run is often too high or covered with dangerous ice bridges, the river below the takeout widens and access improves. The gradient, on the other hand, continues its rapid pace.

To get the full effect, paddlers can put in just outside of Whitaker Falls Park on Glendale Road. Stay on your toes and ready to portage, because the park’s main attraction is a marginally runnable waterfall with several sieves followed immediately by a not runnable 25-foot cascade into rocks. Portage early on the left through the park and be sure to explore the enormous cave behind the curtain of the falls when you make it back to river level. The last mile of Roaring Brook is a near non-stop series of slides that stair-step to the takeout on Route 12. Make sure you scout every horizon line your first time down, some of the drops hide sticky holes and others land shallow.

Pro Tip: Find a local guide to get landowner access to the best part of the run with a fraction of the effort. 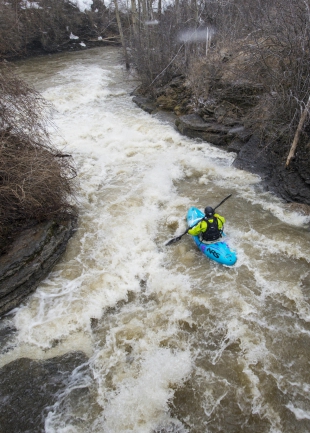 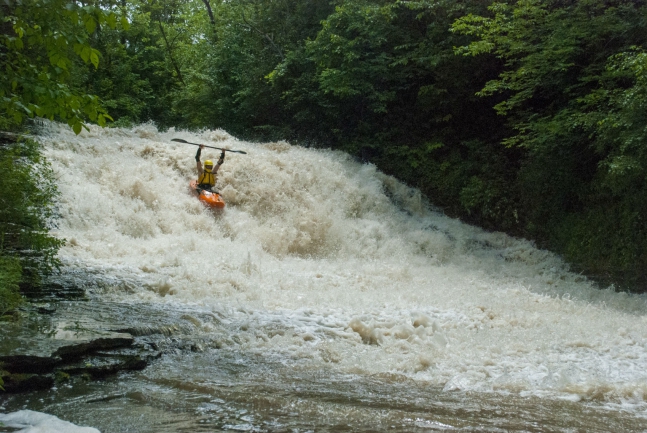 When everything else is too high, Crystal Creek is the place to be. It’s short, but oh so sweet. It drops about 200 feet in just over half a mile, starting with a slide under the bridge at the put-in. From here, it’s non-stop fun with tons of blind corners, steep slides, and mostly smooth transitions. There are a handful of drops in the ten-foot range that are better to run on the right, but just about anything goes. I don’t think I’ve ever left crystal creek without doing at least two laps, it’s just that fun! Make sure to scout the takeout for barbed wired before putting on.

Pro Tip: There’s a BIG runnable waterfall downstream closer to town, but it’s on private property. Talk to the landowners if you really want to run it. 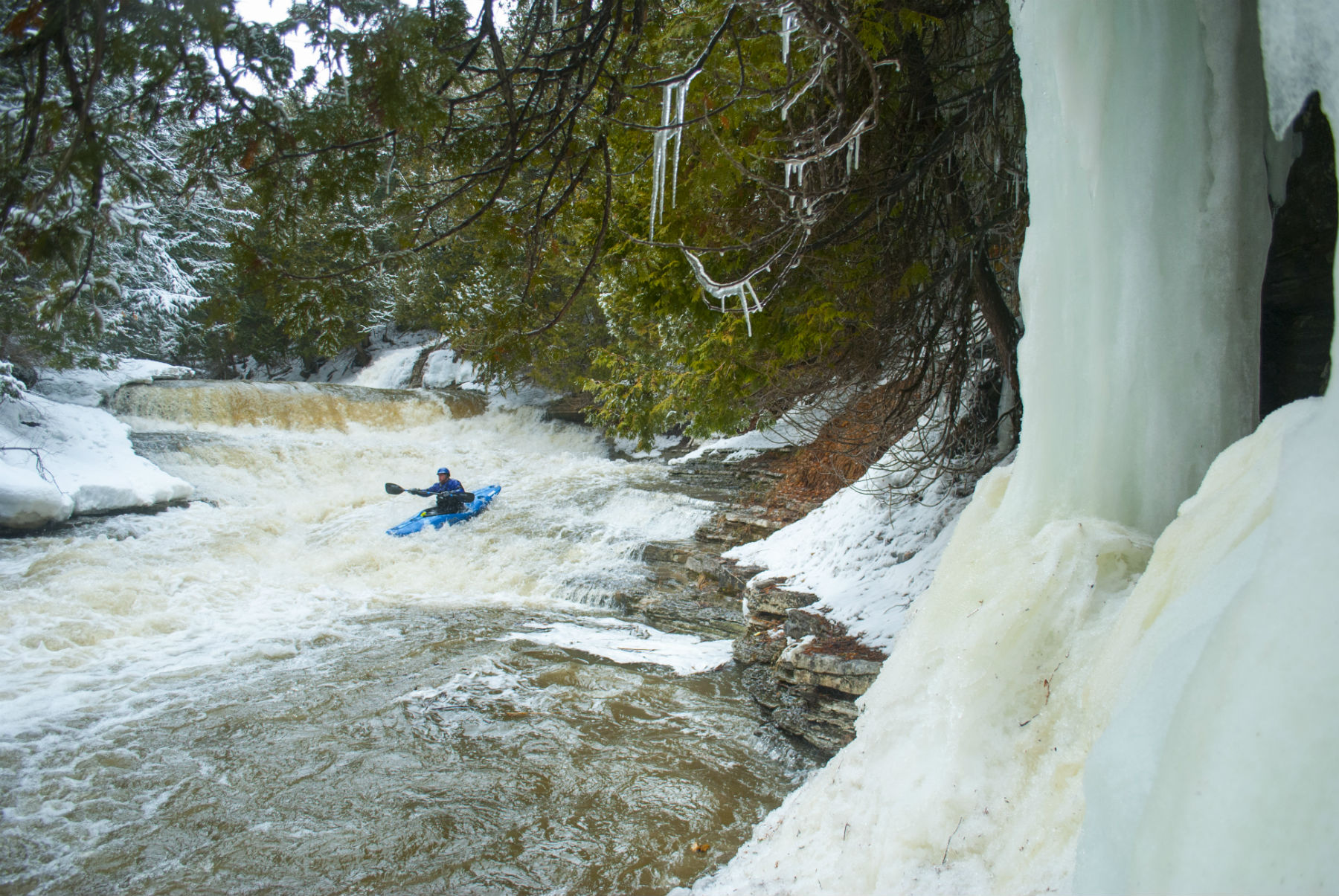 Mill Creek hides in plain sight, right in the middle of downtown Lowville, NY. Few people notice the 15 foot waterfall just downstream of the bridge on Main Street, and even fewer would consider running it if they didn’t see it with enough water to cover the ledge in the landing zone. In fact, Mill Creek is an excellent Class IV creek with one section that crosses the line into Class V.

The hardest section starts just below the high bridge on Route 12 just outside of town. Scout it before you put on. The put-in can be found a couple miles upstream on Gordon Road, where the river quickly drops into a surprisingly scenic canyon. There are a few blind corners, lots of low angle slides, and one boulder garden section. Keep your eyes peeled for strainers. When the river makes a sharp bend to the right, be ready to drop into the crux below the bridge. From there, the river mellows to Class III until the drop in town. If you’re not feeling up for the final Class V drop, you can take out at the bridge on Cemetery Road. 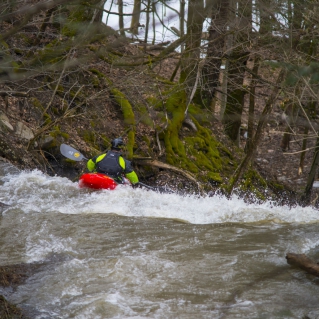 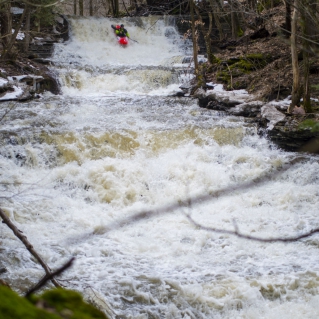 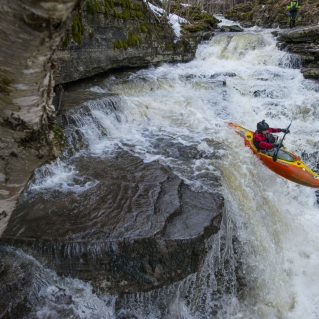 Douglas Creek is a newly explored creek with just enough annoying features to prevent it from ever being a true classic. For one thing, the 20 foot waterfall just below the otherwise easy put-in is completely unrunnable. Save yourself the stress and just walk through the field on river right to put in below the falls. Douglas still makes the list though, because of two incredible rapids between the heinous meandering wood-filled Class II. The first is a slide that starts steep, mellows as it turns a corner, and then drops abruptly once again. The final tier is smoother than it looks on the left side, but do your best to keep the bow up because there is some piton potential. The whole thing is over 100 yards long! Another brief stint of the bad and ugly gives way to a technical three-part drop. A smooth line starts center and moves right to avoid a sieve about midway down, ending with a glorious 8 foot boof. Unfortunately, there’s still about a half-mile of strainers and braided channels to the takeout. 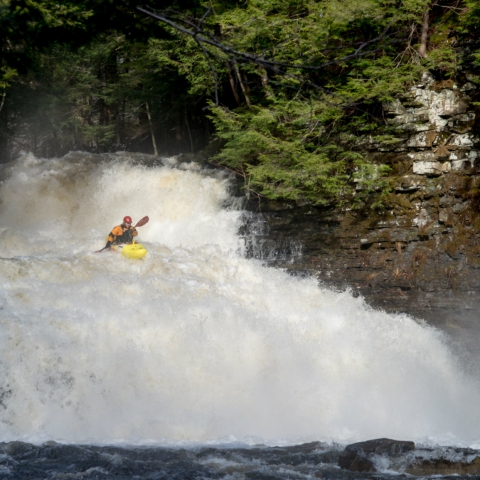 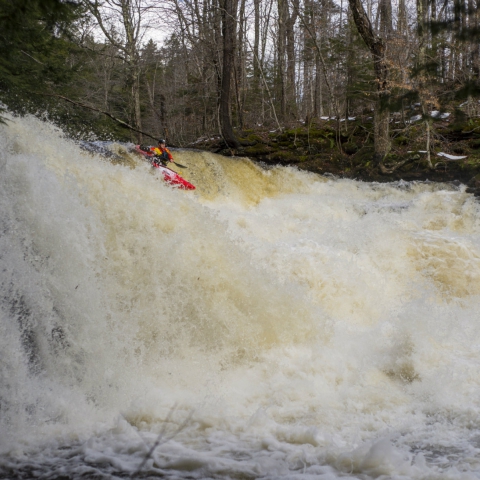 To say Fall Brook is on the way to anywhere would be a lie, but the lure of novelty draws in a few paddlers a couple times a year. Fall Brook Falls isn’t quite a complete “run,” nor is it a true park and huck. Find a put in off the Colvin Road where the river comes close to the road and be ready to battle some brush and strainers for the first few hundred yards. Once the river starts dropping, there are very few eddies. The first ledge is only a few feet tall, but immediately after is a 15 foot double drop. It’s relatively smooth on the right of center. Just a few turns later, you’ll see why Fall Brook should be on your radar. A 12 foot ledge lands in just enough water, before plummeting without pause over a 20 foot falls. This drop is exceptionally hard to portage, so don’t bother putting on if you’re not feeling sendy. About a mile of easy Class II leads to the takeout. 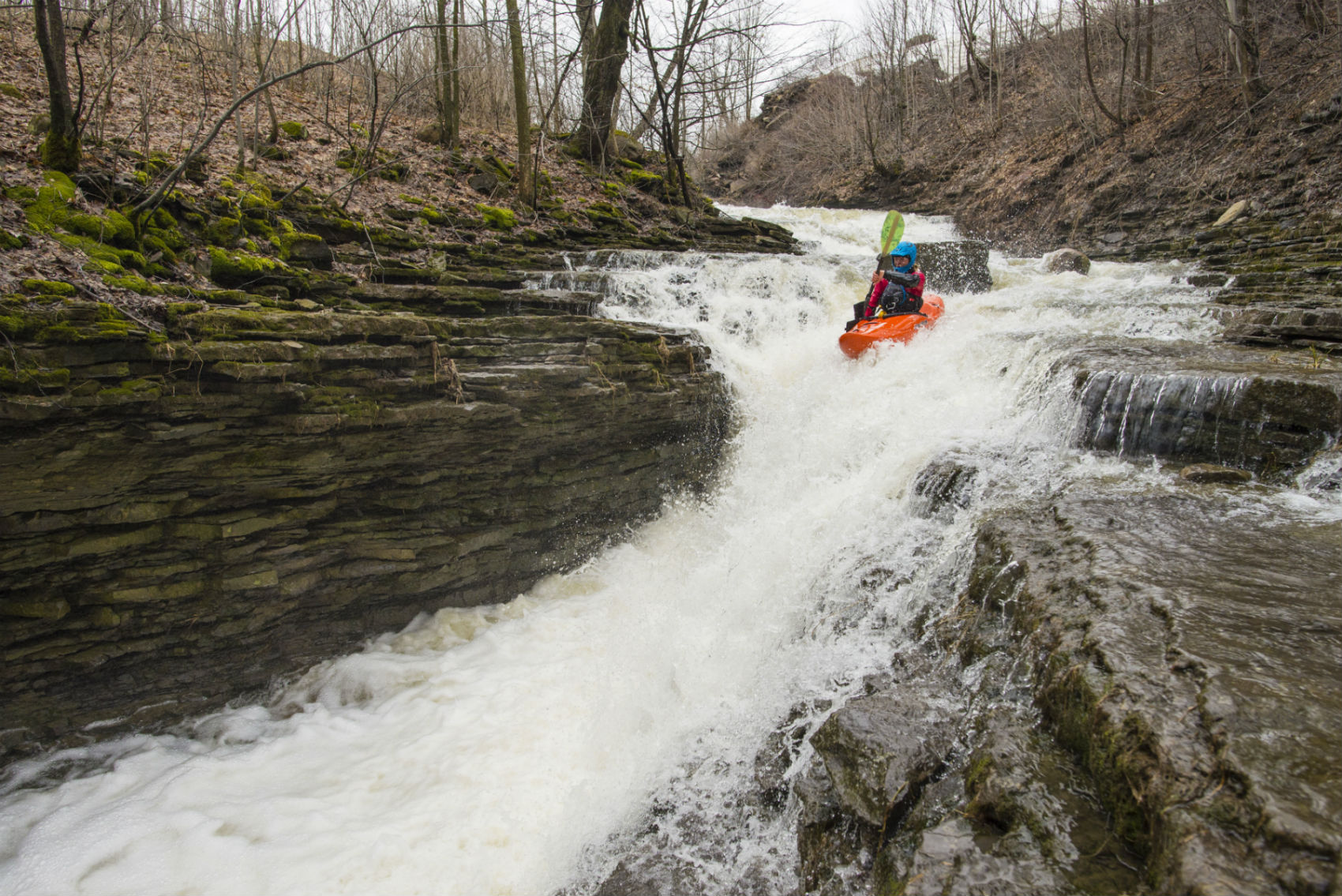 Negro Brook is drainage ditch kayaking at it’s finest! When everything else in the area is really high, head to Negro Brook to run laps on some fun slides. Start with a short walk across a field to where it looks like the creek starts dropping. Several slides careen down and around a corner, ending with a 5 foot boof off a V-shaped ledge just above a culvert under the road. While the ledge has been run down the center of the V, it’s generally best to aim for the boof on river left. Catch an eddy quickly after the culvert, the whole stream washes into a mess of brush and barbed wire fences just around the bend. Take out, hike up and repeat.