How Not to Teach Whitewater Kayaking

One of the best parts of coming into your own as a paddler is becoming confident and proficient enough to share the stoke of kayaking with others. It doesn’t take long to realize that going kayaking and teaching kayaking are two totally different skill sets, and being good at one doesn’t necessarily translate into being good at the other. That would be the case for me, now a full-time kayak instructor, when I casually dipped my toe in the waters of teaching more than four years ago, I wasn’t great.

I started as a safety boater, then moved to an instruction shadow, before finally leading on my own. The lessons I could only learn through trial and error as a recreational paddler—the need to wear socks under a dry suit, She-Wees require practice in a controlled environment, and showing off for the camera usually results in documented proof of dorking—seemed to reappear in virtue as I came in to my own as a kayak instructor.

Growing and improving as an instructor means making mistakes, and I’ve made my fair share to learn the important lessons along the way. In hopes of keeping you out of some of the pickles I’ve been in and at the risk of sounding like a chump while sharing some of my more impactful instruction blunders, I share with you a few key lessons I’ve learned about how not to teach kayaking. 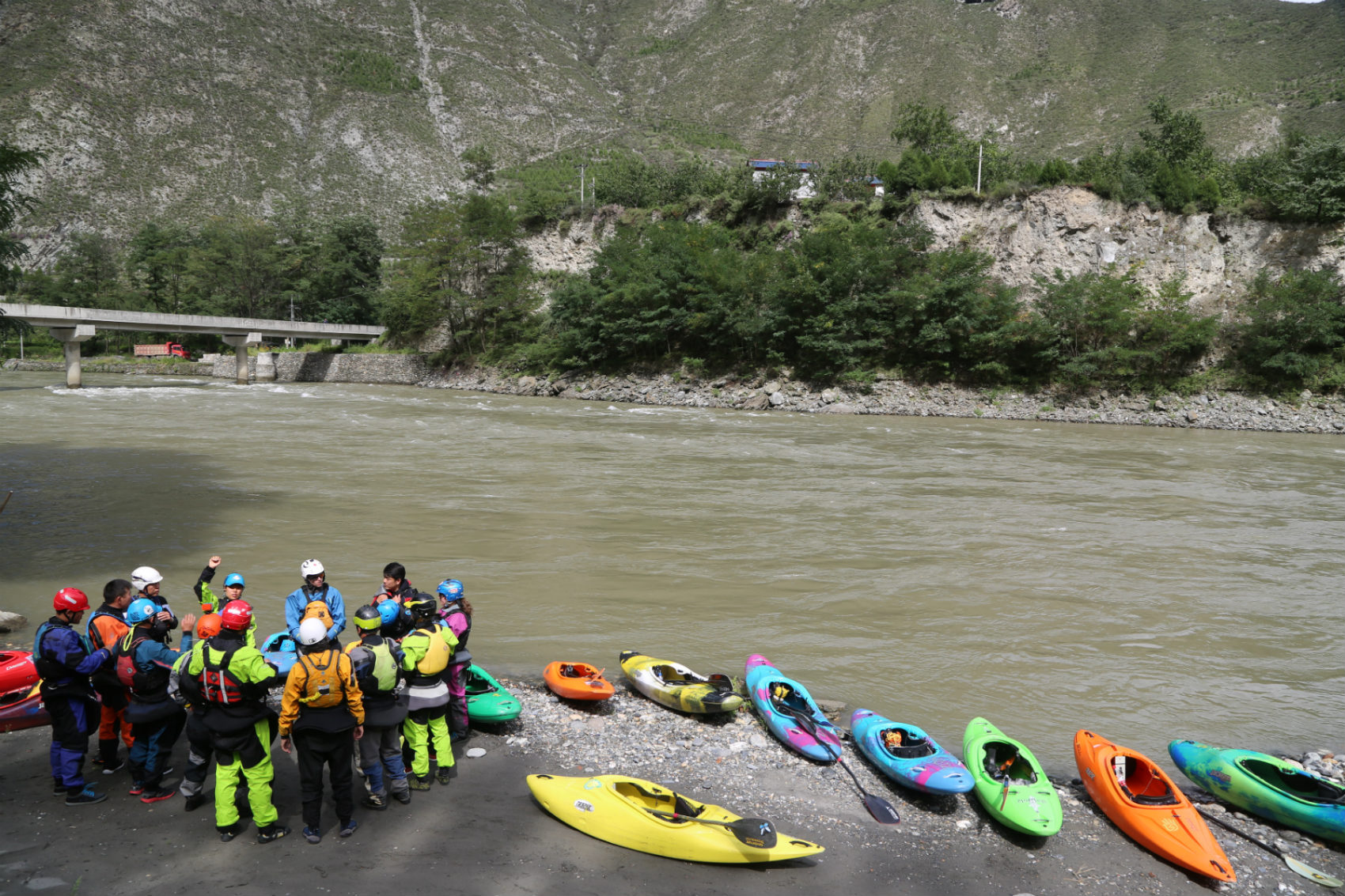 Forget your breakdown paddle. I could regale you with an epic recollection of one of my most embarrassing river blunders to date, but here’s the quick and dirty: I forgot my breakdown paddle, and unlike the many days before where I didn’t have my breakdown and it didn’t matter, on this particular day, it did. There’s nothing worse than being in the midst of a great day with a fired up group and losing your paddle, only to realize you left your breakdown (read: spare) at home and the only option is a crappy hike out. If you’re lucky, like I was that day, the paddle you lost to the river bottom will pop up and start to float past you, and you’ll just barely be fast enough to jump in your boat and grab it to narrowly save the day.

But seriously, this one is easy. All you have to do is ask yourself what you would do if someone lost or broke a paddle on the stretch of river you’re teaching on. Use that question as a guide to determine the necessity of a breakdown or not. Really, if you’re teaching, it’s nice to have a backup to keep your student in the moment rather than having to cut the day short, regardless of how easy it is to take off the river. And if you opt for hand paddles instead of a breakdown, you better be able to rescue, wrangle, assist, and attain with those hand paddles just like you would with your paddle; otherwise, you need a breakdown instead.

For me, all I needed was a little scare from the river to learn my lesson; the breakdown now has a permanent spot on my gear checklist for just about any and every section of river I paddle. 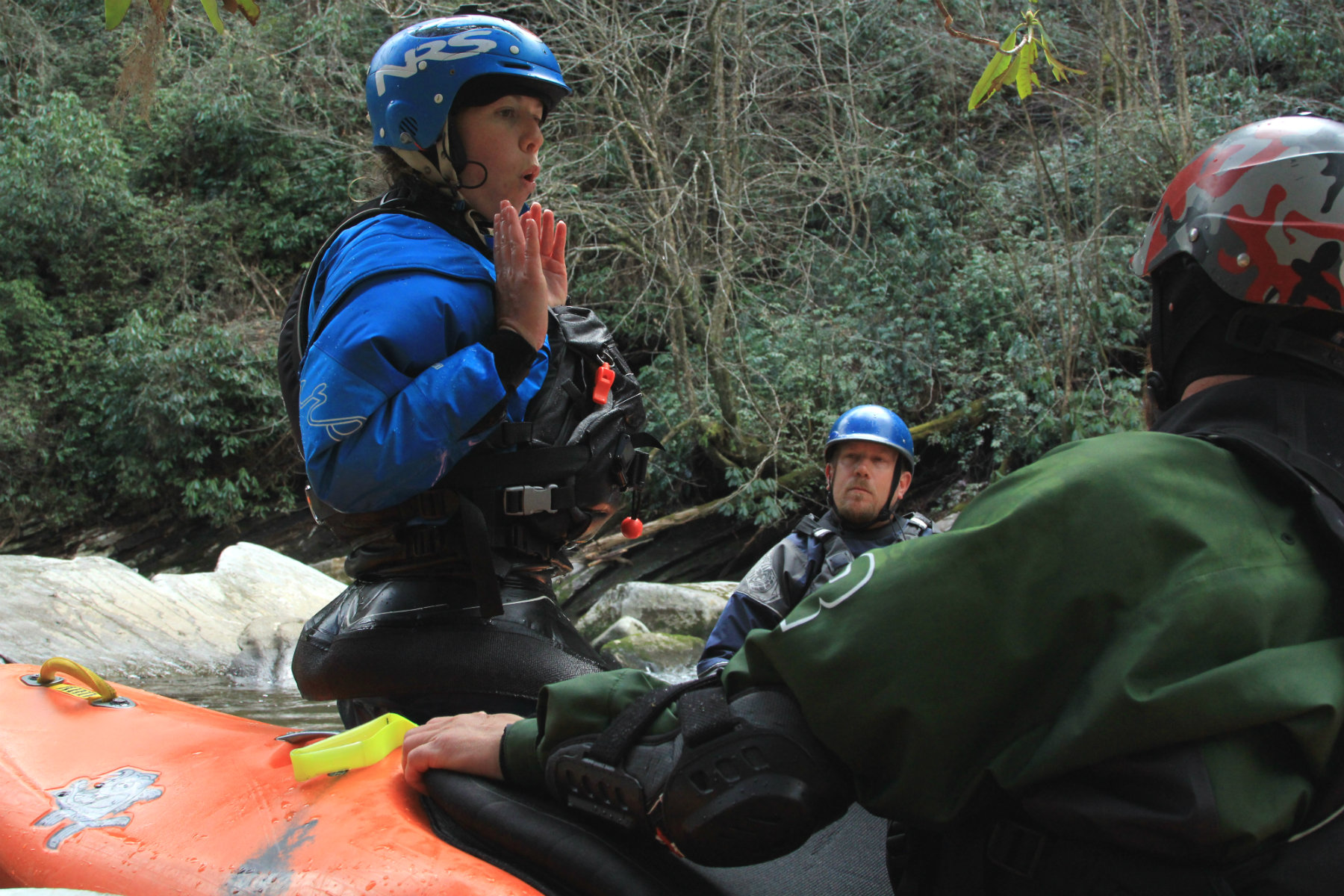 Tell your horror stories. In my early days as an assistant instruction, I used to share experiences like, “Oh, I’ve run this whole rapid on my head dozens of times!” or “I’ve had a swim here and it wasn’t bad at all,” as a means of trying to quell nerves and level with paddlers who were exceptionally anxious about the rapid ahead. In retrospect, I’d say this had a 50/50 success rate, with some people latching on to the idea of “Well, if that’s the worst that can happen…” and feeling confident, and others shrinking back as the idea of being upside down in a rapid or taking a swim was merely highlighting their biggest fears.

Think hard about sharing your stories of crashing and burning with your students, and know why you’re sharing them, and when. Instruction isn’t about you and how you’ve survived, it’s about empowering your students to persist through their own challenges, not carry yours in the back of their mind. I’ve had just as many students shut down and clam up from hearing personal stories of epic swims or surfs because their fears latch onto all that went wrong with the story, not the eventual triumph. Use caution and tread lightly, and save the stories of bloody noses and dislocated shoulders for another time. 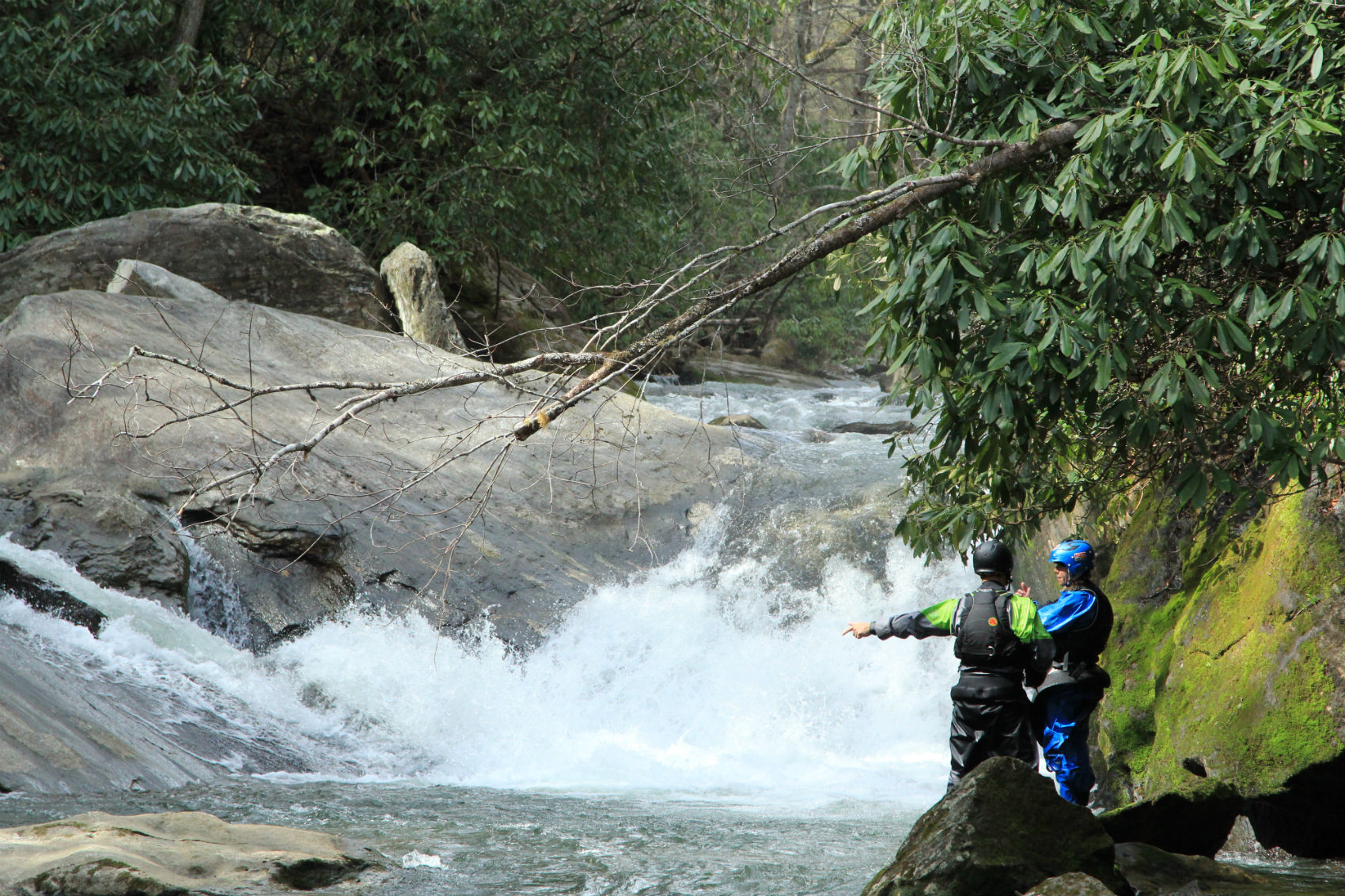 Hold them back. A few summers ago, I had a great beginner lesson with a father and son who caught on quickly to my instruction and showed immediate aptitude with everything I threw at them. The class was great, the students were fired up, and when we finished for the day, they asked about possible next steps to paddle on their own. Knowing they were out-of-towners who probably wouldn’t have a group of knowledgeable boaters with them, I suggested a beginner stretch of river nearby that offered minimal challenge or safety concerns.

A few days later, I learned that they had considered my suggestion of river section, and politely paddled somewhere else instead. “I hadn’t even thought about suggesting that run!” I remember exclaiming, and I really hadn’t. They apparently had an excellent day paddling and exploring another Class II river in the area with no notable incident other than a whole lot of fun.

As a kayak instructor, it isn’t my job to hold my students back; it’s to enable them. Unless the desires of the paddler are completely reckless and dangerous, I have to be able to assess and understand the motivations of my students, and that means offering pathways for various progressions apart from my own. The section of river my guys went to was well within their skill set, and the worst that would have happened—and maybe even did happen, for all I know—was a swim and some bumps and bruises.

Moving forward, I’ve learned to present multiple options to my students who are hungry for more while asking questions about potential outcomes instead of not talking about them at all. “If you head to River A and have a swim in all the major rapids, are you alright with accepting those consequences? How about the impact on your group? What if you lose gear?” Having a frank discussion about acceptable outcomes with students that are motivated has turned out to be a more positive way to channel motivation of exceptionally fired up students than just saying ‘no’ right off the bat. 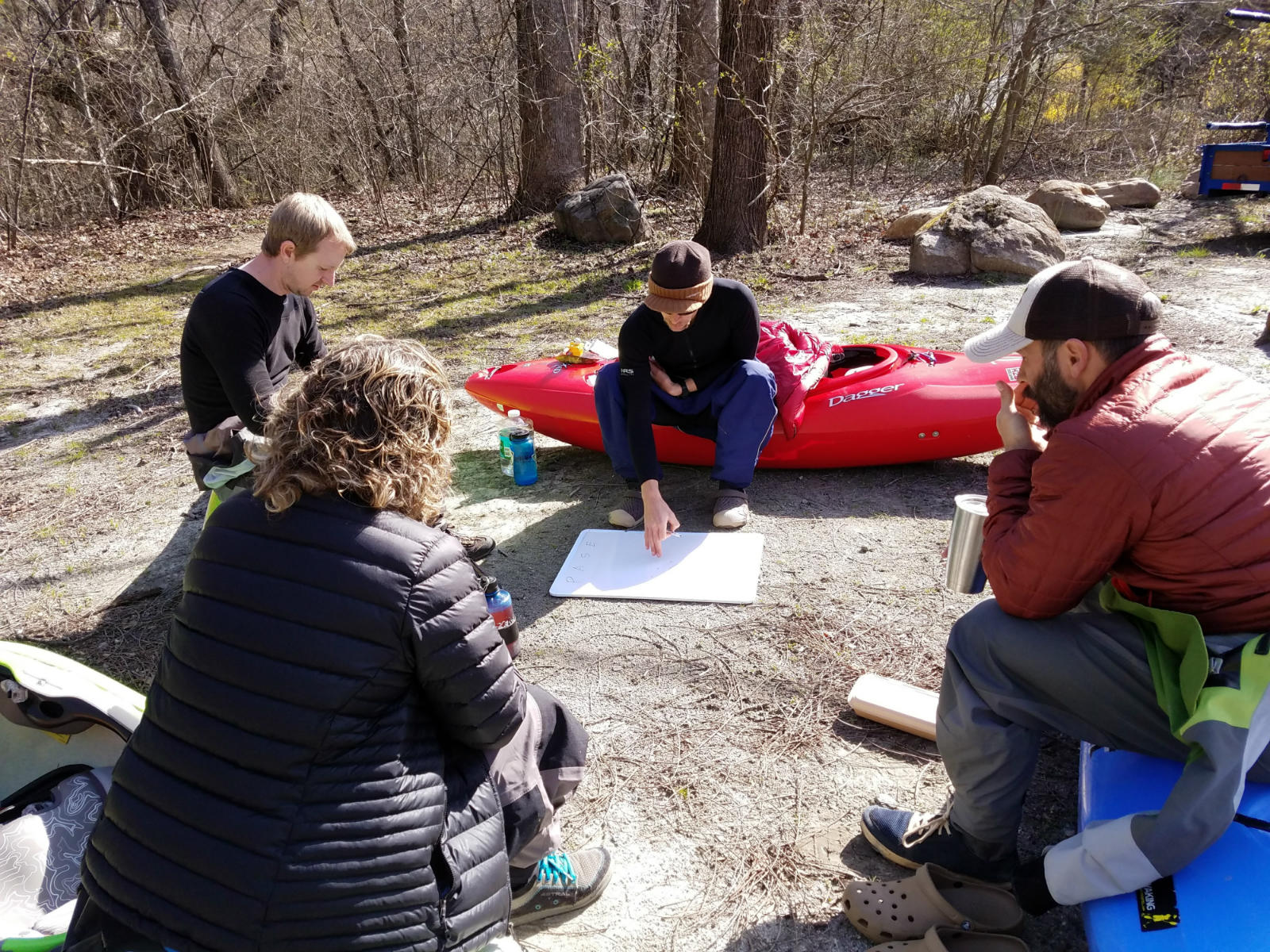 Forget what it’s like to have baggage. Earlier this year, I began physical therapy for some nagging shoulder and shin issues that were keeping me from playing hard. My physical therapist took me through a full-body assessment to check my all around wellness. As she poked, prodded, and pulled me in or out of positions, she would gently remind me to relax, sometimes multiple times while I tried to achieve the same position. In my head, I was yelling, “I AM relaxed!” and grew frustrated. After patient manipulation, though, it became clear to me that I wasn’t relaxed at all, and I had a lot of work to do in order to achieve the relaxation that would precede the desired strength and fitness.

I had to laugh about my frustration on my way home from the session. I often find myself repeating a mantra of relaxation to my students as they uncomfortably try to work their way through new and unfamiliar exercises. While I strive not to take the beginner’s mind for granted, it had been a while since I had felt the blockade of external baggage blocking my performance in a seemingly unrelated exercise.

The simple experience of not being able to relax my muscles or deepen my breath during my physical therapy session was an apt reminder of what it’s like for many of my students as I poke, prod, and gently remind or repeat mantras for success; sometimes a lack of progress isn’t for lack of trying, and can be attributed to baggage elsewhere in the student’s life that just so happens to bubble to the surface while trying to improve. Remembering what it’s like to be new or frustrated by never forgetting what it’s like to be a work in progress is imperative to staying relevant and effective to your students. 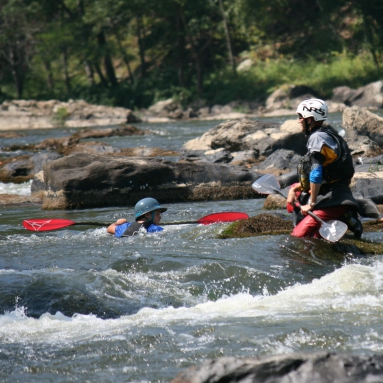 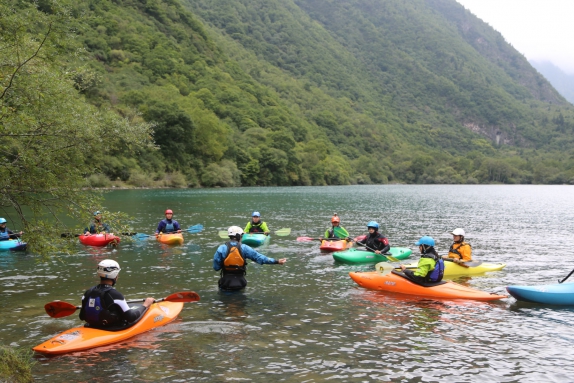 Play the hero. If you’ve been teaching or even guiding for a while, you start to amass a collection of experiences where you didn’t think, you just acted, and you heroically managed to completely avert a crisis for your student without batting at an eye. I’ve got a few, ranging from yanking unsuspecting paddlers out of pins to draining and wrangling a boat in the middle of a rapid. But sometimes the ingrained, instinctive reaction to protect and provide for our students can come at a detriment to ourselves, even if it’s just to prevent a rough swim.

Such was the case for me the time I hopped out of my boat in the middle of a rapid to unpin a boater. She was stable but anxious. Inversion here would not have been perilous, but it would have been shallow and crappy, and I was hoping to keep her experience positive as she had worked through nerves early in the day and was just starting to show progress with growing confidence. I quickly popped my skirt and tried to walk a short ways back upstream to stabilize her, but I had misjudged the strength of the current. My foot stayed planted while my knee twisted painfully in an unnatural direction.

The student was fine, and I was, too, but I learned a valuable lesson in not trying to play the hero when the stakes aren’t high. Luckily, I only needed to ice my knee and hold off on running for a few days before returning to normal, but I could have easily injured myself much more seriously, tearing an ACL or worse. Similarly, I know an extremely capable boater who recently donated part of his tooth to the river while trying to wrangle a swimmer’s boat. Prioritizing the student is important, yes, and should be taken seriously…but know when to let that hero cape fly and when to wait it out.

There are few more gratifying experiences than sharing the joy and challenge of whitewater kayaking with others, but it doesn’t come without investment on the part of the instructor. One of my favorite sayings, “Rarely do we rise to the level of our expectations; we fall to the level of our training,” is a great gut check in keeping myself on-the-ready for working with a student. Take the time to invest in yourself so that you can really help stoke the fire of a new boater, and remember that even though you’re leading, you aren’t infallible, either. The best part of learning to teach is to never stop being a student yourself.