When I started guiding for Whitewater Challengers on the Black River in Watertown, New York, I thought by signing up for a fun summer job I was taking my first step toward “living the dream,” whatever that meant. In many ways I was. What I didn’t realize was that I was also getting my first glimpse into the windows of a Hero Factory.

By many standards, a hero is a person who knowingly risks their lives in an attempt to save another person. To the average rafting customer, that likely makes any given guide a hero. And any guide worth his or her salt knows that to contradict this sentiment could mean losing a decimal point off their tip, or even worse, a chance at a date. Privately though, we know we’re just doing our jobs, and more often than not, no one’s life was ever actually in danger. Still, these people who spend their summers living in tents and vans down by the river are heroes in my book, and not just because they push the boundaries of traditional cultural definitions of success (a heroic effort in itself, although for a different reason).

Dozens of my friends have responded to life-threatening situations while off the clock, whether on the river or off. Sometimes the victim is a close friend on a familiar run, others it’s a complete stranger far from home.

I remember one time on the Upper Gauley I was paddling with a group of riverboarders just downstream from Initiation when someone noticed a boat wash into the infamous sieve near the center of the river. Even though it was unclear if a paddler was trapped with the boat or not, there was no hesitation; we all knew the lethal potential of the situation and scrambled to shore to help. I distinctly remember trying to assess the situation, highlighting points of access and anchor opportunities as I sprinted up the bank.

We quickly established a connection but struggled to effectively extract the pinned paddler until my mind flashed to foot entrapment drills in guide training. Since the victim had an air pocket and was able to hear us, we could take the time to build two bomber anchors and use a reverse V-lower to extract him. We had the victim out and onshore in less than a minute once we established a tag-line.

Another time, I was undoing shuttle along the Tumwater section of the Wenatchee River in Washington when I arrived at the takeout to find a totaled car and a good friend assisting the elderly woman who had been driving it. While I was hitchhiking back to the put-in, my friend watched as this woman lost control of her vehicle, crashed into the cliffs lining the road, and rolled her car multiple times.

He was able to help keep the woman calm, assess some of her injuries, and direct traffic to prevent another accident from occurring before the paramedics came. It felt surreal to return to the place I had been high fiving my friend for a successful run less than twenty minutes prior, only to find the same friend in the midst of a rescue surrounded by smashed glass and twisted metal.

Regardless if we’re on or off the water, the response is always the same: immediate development of a plan, calling for assistance if possible, and doing everything humanly possible to perform a successful rescue. Guides don’t think about whether they should respond or not. Guides think about how they can make a successful rescue. 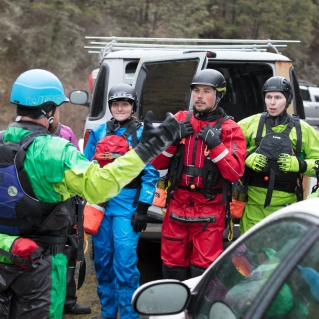 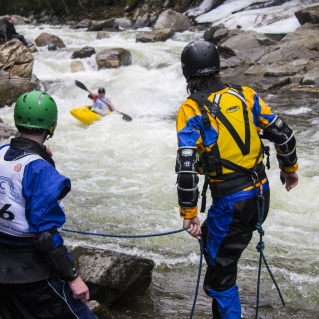 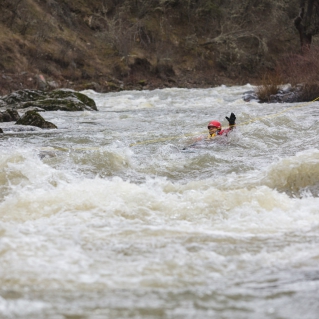 This is because of the Hero Factory. It might just look like a rafting base, but I’ve seen what it can do. There’s a lot to learn in guide training, but nothing is drilled harder than safety and rescue. In my first year of guide training, I felt absolutely overwhelmed by the responsibility I was being asked to take on. I felt totally comfortable in a kayak where I was the only one who would suffer the consequences of a botched line, but—literally—putting other people in the same boat made me reassess the risks I was willing to take. 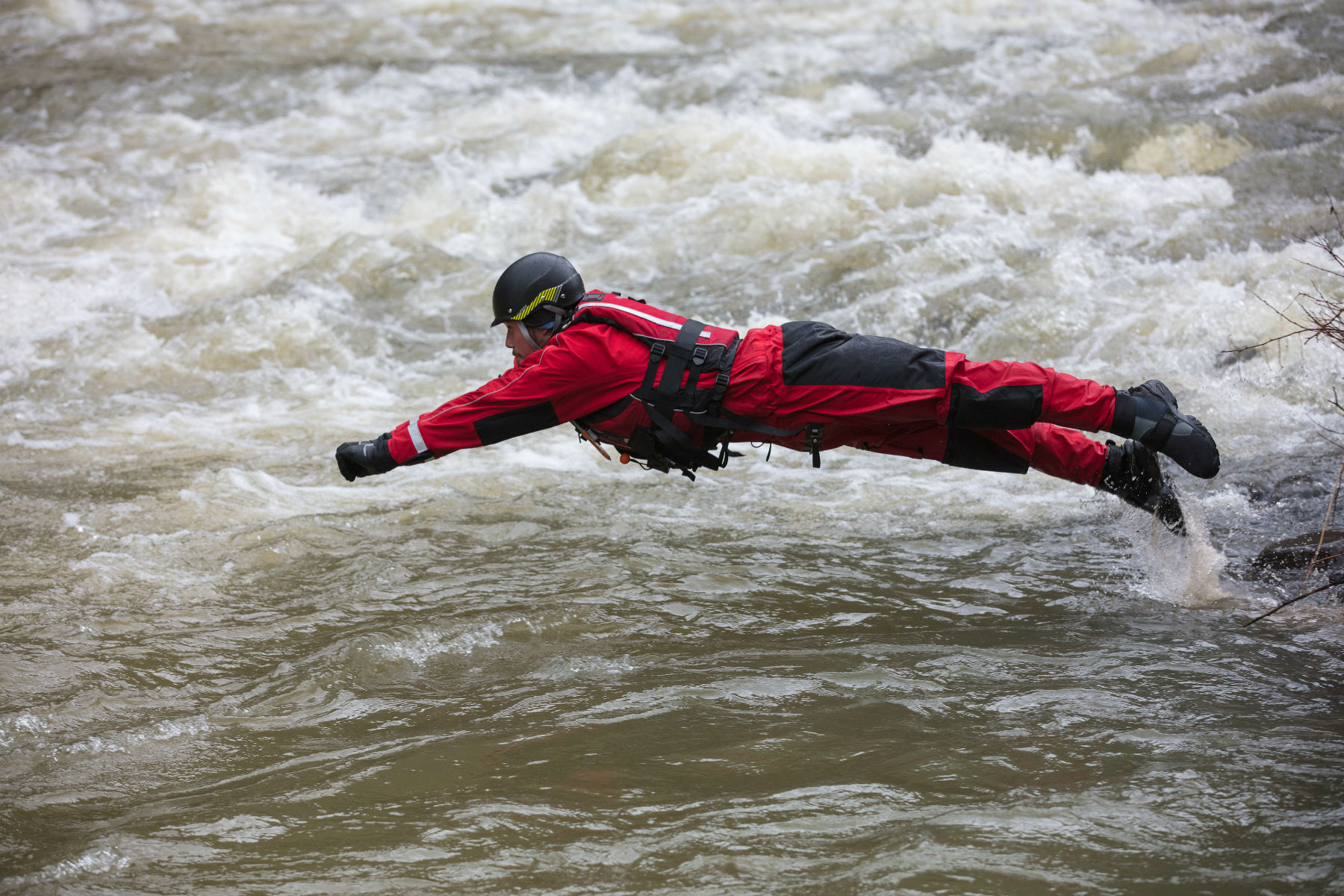 This reframing of risk on the river was integral to guide training, with seemingly endless pop quizzes testing awareness. How many people are in Tom’s raft? What’s the best access point if we need an ambulance at this rapid? Who is running sweep, and what line are they taking through the next rapid?

And then there were the rescue scenarios, CPR training, anchor building, hours of studying rapids after trips to memorize the location and severity of each hazard, and throwbag drills. The first time we practiced setting up a river-wide tagline I thought I would vomit from the stress. Even with our mock victim in a stable situation above water, I fumbled with the knots in the webbing and flailed wildly to move faster. I could only think of how terrifying it must be for a victim in a real situation and the desperation I would feel to rescue them. But these emotions are exactly the ones heroes seem to dispel in the face of crisis. 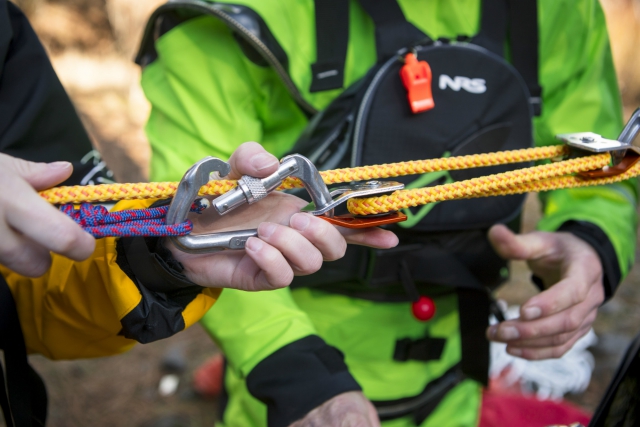 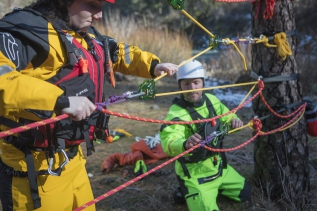 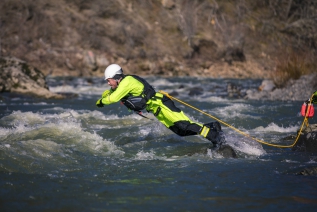 In his book Behave, Dr. Robert Sapolsky, a neuroendocrinologist and professor at Stanford University, suggests a link between low empathy and willingness to intervene in a life-threatening situation. Basically, he’s saying people who exhibit heroic abilities don’t put themselves in the victims’ shoes before taking action. You’re probably asking yourself, how is it that someone who is less receptive to feeling the pain of another person would be more willing to risk their own life to save that person? I asked myself that too, at first.

It seems there is some blurry threshold of empathy a person can feel before they become overwhelmed or paralyzed by the distress they imagine the victim feeling. The empathy I felt for my imagined victim in the tagline scenario was the very thing that led me to fumble, panic, and act ineffectively in the rescue.

On the other hand, low empathy people channel that empathetic pain or distress into action. They see a situation develop and seem to act before they even consider the consequences of what might happen to them. This mirrors the split second decision-making guides and elite paddlers make regularly as they adapt their lines to the incessant variables of difficult rapids. A guide doesn’t think about whether they should spin the raft into an upstream ferry when their crew freezes in fear at the first glimpse of the monster hole downstream, they just do it. 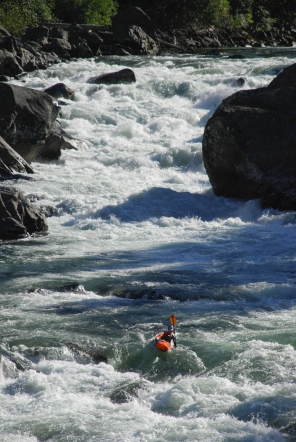 Tumwater of the Wenatchee 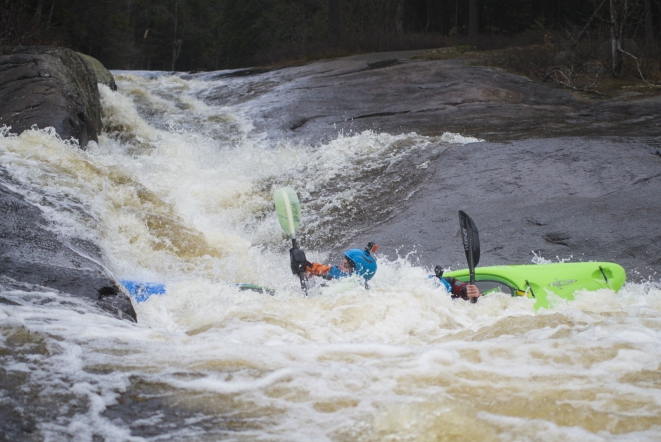 Guides are required to keep calm, evaluate situations objectively, and act with conviction. What’s most interesting to me is how rarely these skills are explicitly taught. How effective do you think it would be for your trainer to yell “just stay calm” as you ride out a savage surf in the biggest hole on the river? Rather, these skills seem to be the kind of thing that can only be gained through experience and conditioning. Guiding is so effective at instilling them because it’s reinforced daily.

Every trip is a constant exercise in risk analysis and adapting to constantly changing variables. The ability to identify hazards, plan escape routes, and imagine worst case scenarios has been ingrained in our consciousness so that we barely notice the individual bits of information have been collected and processed in our brains. We learn to act with grace under pressure, both in executing our lines and in responding to rescue scenarios. We’re conditioned to instinctually assess risk and act in any rescue scenario that pops up whether we’re in a familiar setting or not.

At the end of the day, maybe my guide friends can’t help it, they’re just doing what they’ve been conditioned to do—on and off the clock. Still, #myfriendsaremyheroes.