Bozeman: Paddling, Fishing and Food Under the Big Sky

Southwest Montana may be better known for its deep powder skiing, world-class fly-fishing and proximity to Yellowstone National Park, but paddlers shouldn’t forget to bring their craft of choice when visiting during river season. Bozeman is nestled on the north side of the Yellowstone Plateau in the headwaters of the Missouri River, giving visiting and resident river lovers alike a choice of three local watersheds to explore. As the mountains surrounding Bozeman slowly shed their thick coats of snow each spring, locals make the annual metamorphosis from skiers and snowboarders to paddlers and anglers.

Bozeman’s whitewater community is small but strong. Need to work on your playboating skills? Wave Train Kayak Team is most known for its summer kids’ programs, but also provides whitewater kayaking lessons for adults, and be sure to check out—and participate in—the annual Gallatin Whitewater Festival that they host during the third week of June each year. Forgot your rig bag? Break an oar? If you need to rent or repair gear, head to The Barn between Bozeman and Four Corners for Bozeman’s only full-service boating shop. Don’t forget to pick up a canister of bear spray while you’re there if you plan to head into the backcountry—greater Yellowstone’s Grizzlies can be unforgiving when startled. Finally, check out Shuttlesnap to reserve your area vehicle shuttles. Now, let’s explore the area’s rivers!

The Gallatin
Whether you’re camped on a friend’s couch or sleeping out in nearby Hyalite Canyon, you’re going to need some fuel to start your day. Head down to Wild Joe’s for caffeine on the go, or the Nova Cafe for a longer breakfast featuring locally sourced ingredients. If “lots” is your favorite flavor, then hit Mama Mac’s in Four Corners for giant breakfast burritos on the way up the Gallatin Canyon. Check out the Museum of the Rockies on a rest day, or send non-paddling family members there to see one of the largest collection of dinosaur fossils in the world. 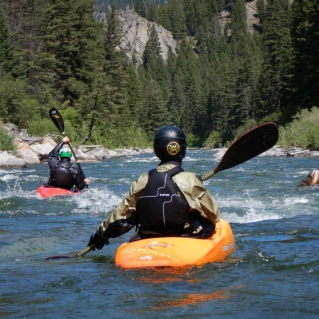 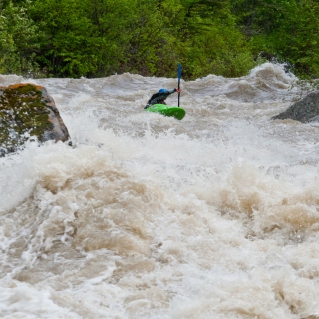 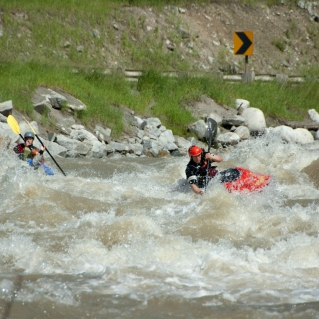 As one might suspect, this series begins with a rock the size of a decent cabin in the middle of the river. Get left of the rock, and then enjoy the crashing waves and holes below. Alternatively, one can take out at the 35mph Bridge (aka Lava Lake Trailhead) if this section feels like too much for you. Both runs are roadside, so vehicle scouting and shuttle opportunities abound. Near the take-out below Storm Castle Peak, you’ll be treated to a signature view from the film A River Runs Through It.

Below the Mad Mile, the Gallatin River continues with read-and-run Class II/III for another three miles that can either be paddled as a short, standalone stretch or added onto a run from above. Reward yourself with lunch at the Café at the Inn, located near the take-out. 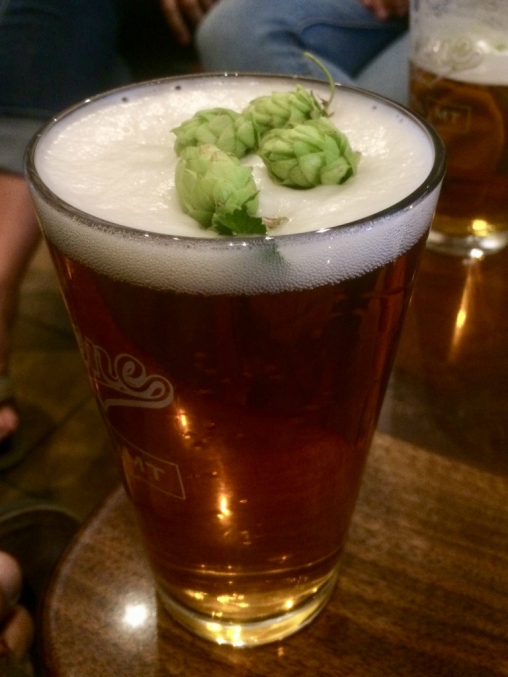 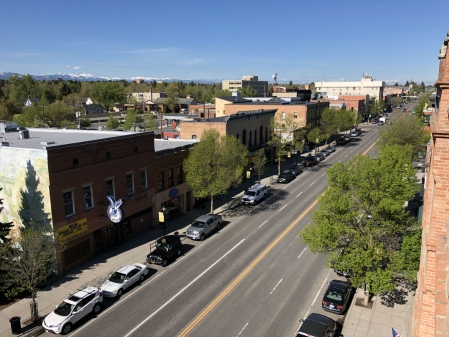 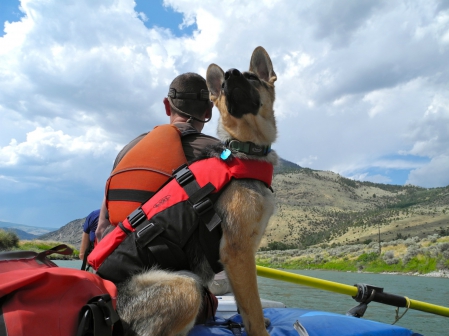 At the end of the day, head back to Bozeman to sample one of our many local breweries. The Bozeman Brewing Company—“Bozone” for short—is the original local’s watering hole, while spacious Bridger Brewing Company offers great pizza and beer with gluten-freee options for both. MAP Brewing Company, situated on the south side of Bozeman Pond with a stunning view of the Bridger Mountains, is the new guy in town but has quickly become a local favorite.

Bozeman Pond is also a great place to practice your roll or to stand up paddleboard (SUP), even if you just to paddle over to MAP from the public access on the north side. Wrap up your après paddling downtown with a burger at the Backcountry Burger Bar or one of the many selections at Montana Ale Works and you’ve had a great night. Home to Montana State University, Bozeman isn’t lacking in watering holes for the thirsty night owl. Take a walk downtown and sample some of the different options.

The Yellowstone
The Yellowstone River is the longest free-flowing river in the Lower 48, originating south of Yellowstone National Park and flowing 700 miles to its confluence with the Missouri River in North Dakota. Though mostly Class I and II, everything outside of the park is paddle-able. The uppermost reach of the Yellowstone north of the park traverses the length of the aptly named Paradise Valley between the towns of Gardiner and Livingston and can swallow days of paddling, fishing, camping and exploration.

Starting at the top of the park boundary, the Gardiner town run offers four miles of Class II/III paddling, followed by Yankee Jim Canyon, serving up a short but fun Class III gorge. Above 7000 cfs, a large hole called “Boat Eater” toward the bottom of Yankee Jim will keep you on your toes. Above 15,000 cfs on the Corwin Springs Gauge, expect to find Class IV big water in the canyon.

Below Yankee Jim, the river becomes fast-moving Class I/II down to Livingston, passing multiple fishing access sites (abbreviated “FAS” on road signs) with boat ramps, framed by stunning views of the Absaroka Mountains to the east. Be sure to respect private property during your floats. The Paradise Valley gets a lot of traffic.

While you’re in the area, make sure to visit the Wild Flour Bakery and Follow Yer’ Nose BBQ in the tiny town of Emigrant. Owned by a friendly local paddling couple, you can’t go wrong with their cinnamon rolls, authentic, locally-sourced barbeque and amazing atmosphere. After the sun goes down, head over to nearby Chico Hot Springs for a nightcap and a soak. On your way back to Bozeman, don’t forget to make a stop in Livingston: Grab a quick bite at Mark’s In and Out, or spend a little more time at Gil’s Goods and the uber-classic Murray Bar. 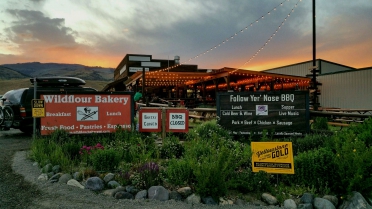 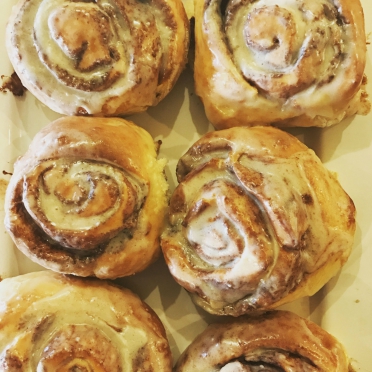 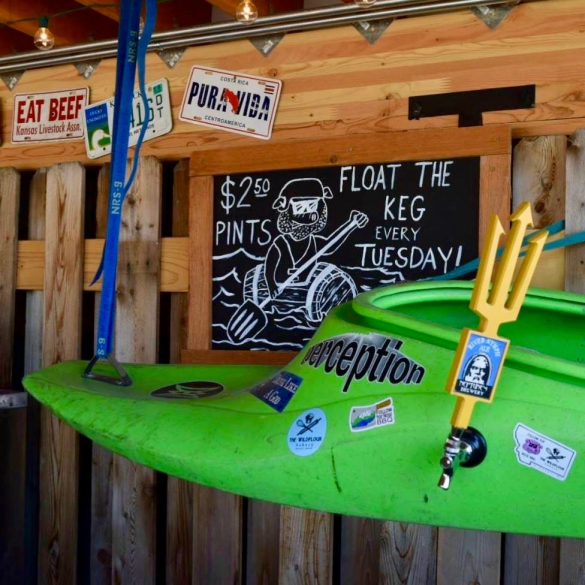 The Madison
A short drive west past the Gallatin lies the Madison River and the quaint town of Ennis. At the very top of the valley sits Quake Lake, which formed in 1959 after a 7.2 magnitude earthquake caused a massive landslide that dammed the Madison River and killed 28 people. When the river finally breached to the landslide, it formed a mile-long stretch of Class IV/V whitewater commonly called “Quake Lake,” or just “Quake.” Shallow, powerful and loaded with razor-sharp rocks, Quake is for expert paddlers only. The largest rapid in the run is “S-turn,” a substantial Class V drop. Below the rapids of Quake Lake, the Madison River mellows into a scenic Class II mountain river, best known for its angling opportunities.

Shortly after passing through Ennis, the Madison River is plugged by Ennis Dam, which forms Ennis Lake. Directly after the dam and powerhouse, the Madison enters the Lee Metcalf Wilderness where it flows for 10 miles through Beartrap Canyon. While most of Beartrap is composed of read-and-run Class II/III whitewater set in a stunning canyon, there are three rapids of note.

The first is “Whitehorse,” a fun rapid full of waves and holes that will keep you on your toes. Marked with a horizon line and a rock wall rising from river left, “Kitchen Sink” is a true Class IV boulder garden, scouted on river right. Below the Sink, the “Green Wave” (Class III) can give the unwary paddler some trouble as well. After the Green Wave, the water settles down to Class I until the take-out at Warm Springs FAS. Below Warm Springs, there are take-outs every so often along Highway 84 until one reaches Black’s Ford. This section is popular for tubing, SUPing, wade fishing and rowing drift boats.

Following a day of paddling or fishing on the Madison, soak away the chill at Norris Hot Springs, which also serves farm-to-table foods and local microbrews. Stick around in the evening for live music under the stars.

The Uniqueness of Greater Yellowstone
There are few places in the lower 48 where one can paddle or hike and still encounter all of the wildlife that was here before the Lewis and Clark expedition traveled through the region in 1806. You can help to keep it that way by driving slowly, keeping all food locked in your vehicle (“a fed animal is a dead animal,” as the saying goes), disposing of all trash properly, and consciously managing your impacts while on the river. Greater Yellowstone also contains the headwaters of five great rivers: The Missouri, Yellowstone, Green/Colorado, Snake and Clark Fork/Columbia. Please consider helping to protect this special region for future generations by donating to a nonprofit conservation organization of your choice.