Twenty years from now my kids will insist we once took them to hell on a summer vacation. And because memory is more of a highlight reel than a full-length film, they will argue about which summer we went and exactly what hell was like, but they will agree that we took them to hell. And, they won’t be entirely wrong. 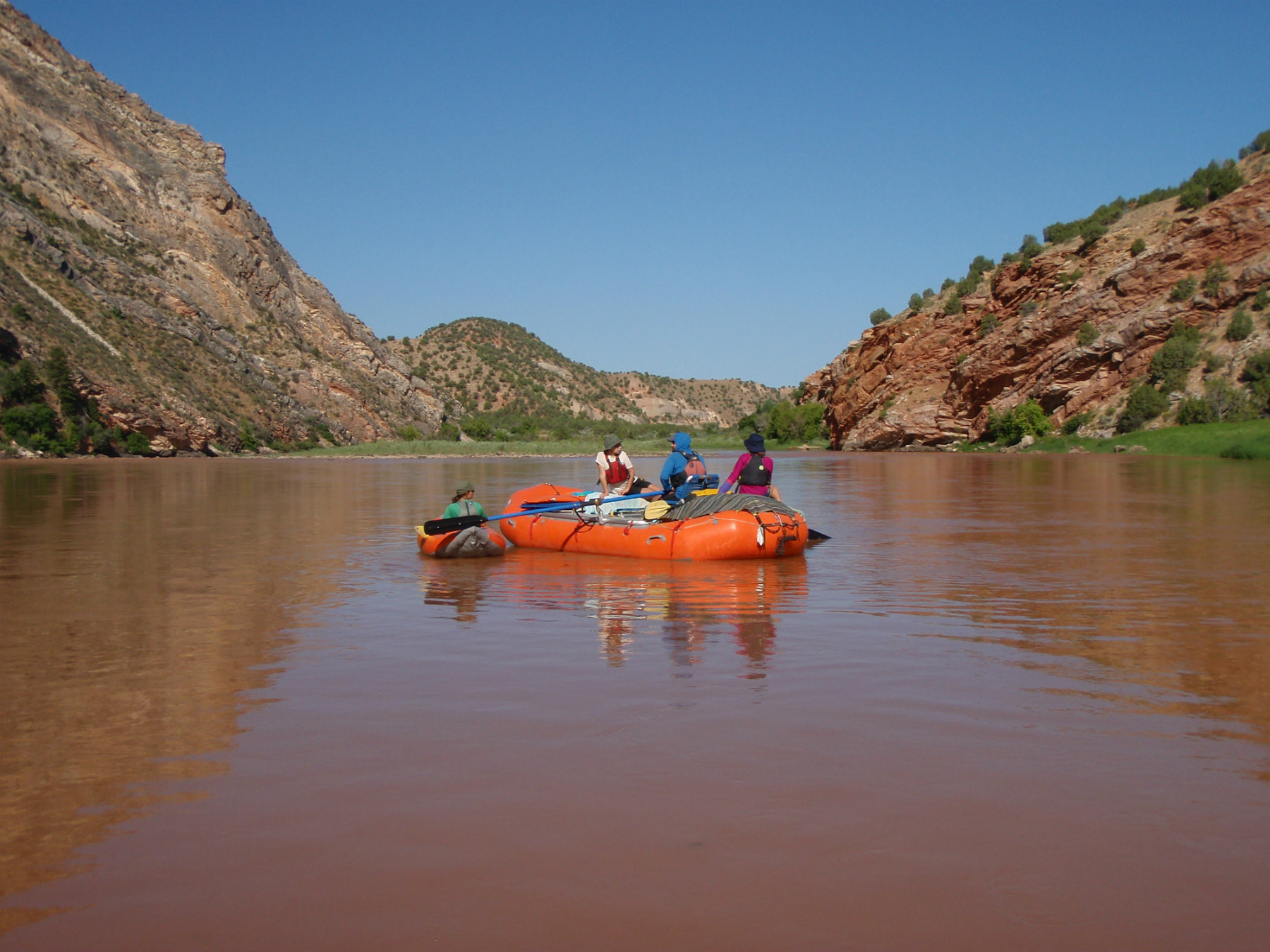 To be sure there was sulphur—hell’s perfume. Out of White Sulphur Springs, we rafted a 59 mile stretch of the Smith River in Montana; then more sulphur at the hot springs of Thermopolis, Wyoming.

Hell’s topography mapped our route with holes, canyons, gorges and gates. We descended into and through Jackson Hole; we rafted through Hell’s Canyon on the Snake River; on the Green River through the Gates of Lodore we rowed a rapid called Hell’s Half Mile; on the American River another called Satan’s Cesspool; we drove to Yuba City, California, a place that, in July, might as well be hell; on the way home we parked near Devil’s Gate, where we ate PB&Js; and then, finally, we skirted Devil’s Tower.

Even if the place names become casualties of memory, the kids will certainly recall heat, pain, and eternity in various manifestations. 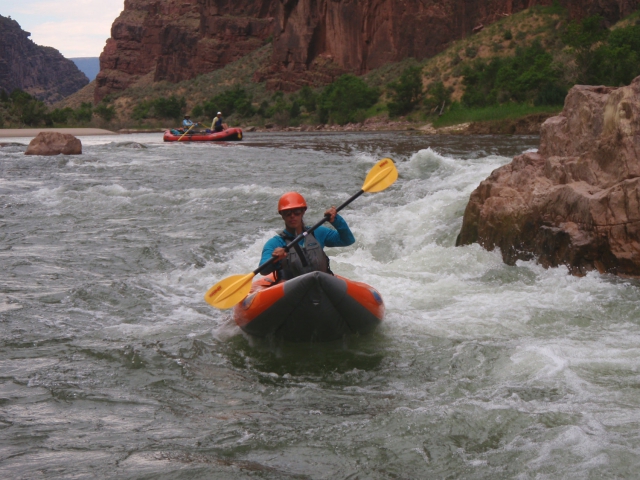 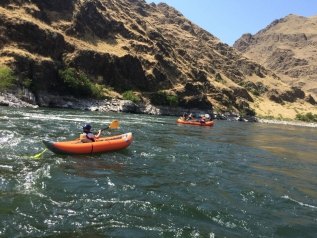 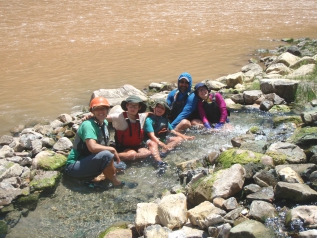 For my oldest daughter, hell was the almost impossible daily task of being the oldest daughter, who, by her own exacting standards, is, at all times, required to be buoyant, grateful, and generous. For my middle daughter, it was the forced proximity to family and the corresponding exile from friends. My son’s memory will be of more corporeal discomforts like actual heat and pain and the possibility that other kids played with his toys back at our house.

When these painful memories surface, my wife and I will remind them that good intentions paved our entire summer vacation.

And, to be fair, we ended up being (mostly) successful. 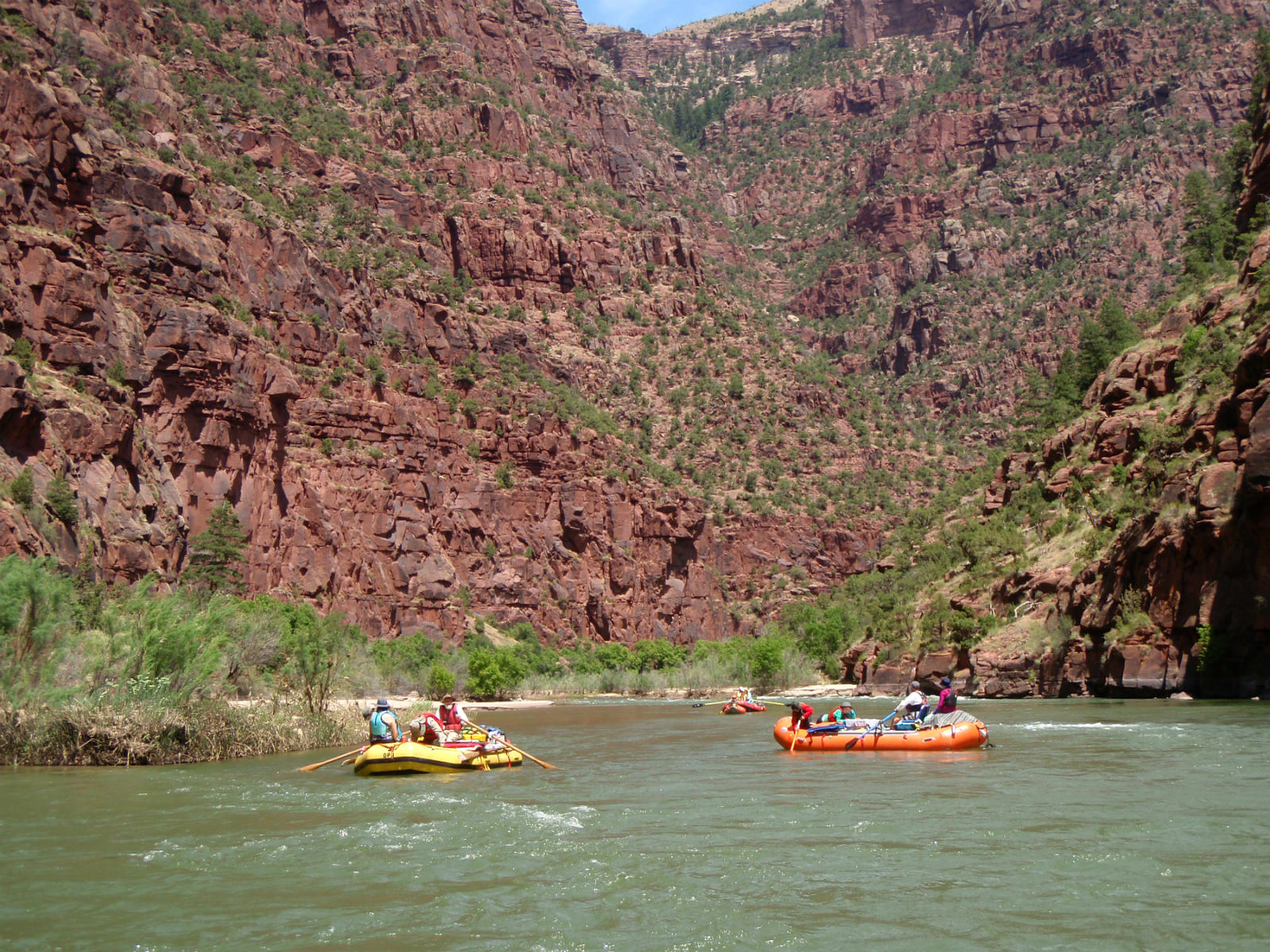 We didn’t pay off the bedroom and bathroom. We found ourselves in too many stores that sold whitewater gear.  And had too many conversations like the following exchange between my wife and me. 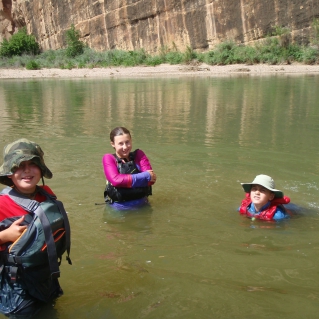 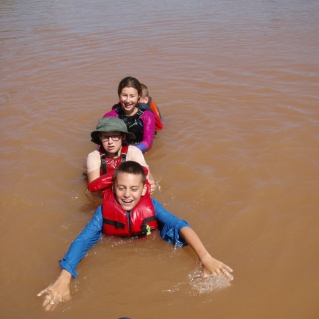 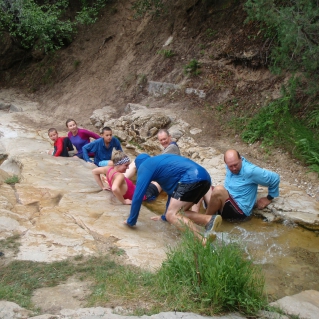 Did our kids learn to love rivers? We can’t know that. Not yet. They floated a lot of river miles. They rowed a raft. They paddled the inflatable kayak. They ran some fun rapids and some scary rapids. They saw a bear, bighorn sheep, beaver, deer, bats, eagles, osprey, a pair of skunks that raided our camp and ran across our boats and our sleeping bags. They hiked to waterfalls, caves with pictographs, abandoned cabins. They fished, they jumped off cliffs into rivers, they swam rapids.

Who knows which of these experiences will lodge in their memory? And who knows how these experiences will percolate? If you were to ask my middle daughter about running rivers right now, she would offer a reflexive eye roll and tell you “how terrible” it was, but maybe she will be the one who becomes a river guide.

“See that tree,” she will say pointing out a dead tree to some unimpressed kid.
“It’s called a silent dog tree.”
“Why?”
“’Cause it’s got no bark.” ba-dum-da! 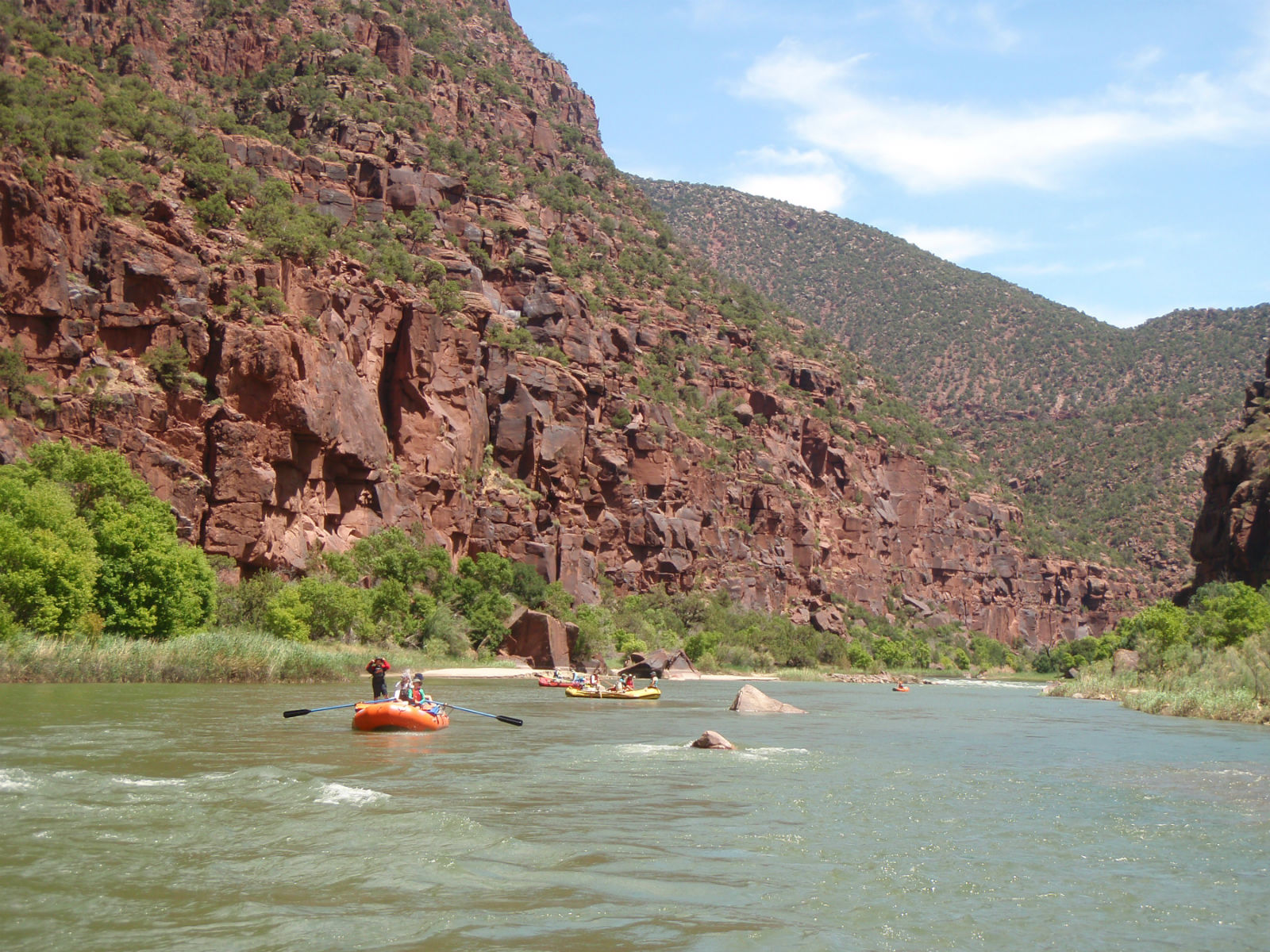 We did meet and raft with other families and our kids met other kids. In Hells Canyon we rafted with a newly divorced father trying to give his kids a great summer vacation and, I think, succeeding. Our kids and his kids reinvented themselves as Gods and created the mythology to match as we floated through the deepest canyon in North America.

Through the Gates of Lodore, we rafted with a Mormon Group who had invited us on their trip on the conditions of “No Alcohol, Profanity, or Nudity.” My wife and I managed to keep our clothes on and not drink beer. But the profanity thing proved harder. My wife dropped the f-bomb when her kayak dropped into a huge hole that she hadn’t seen. She was, due to the circumstances, forgiven.

All of the people we met were great people. And sincere promises were made to take future trips together. 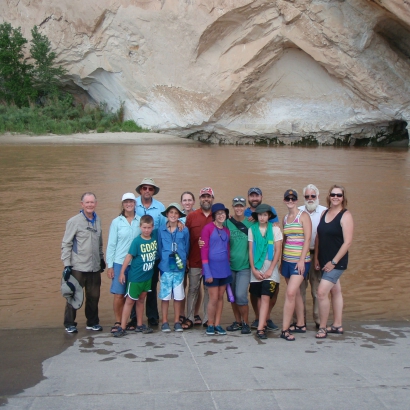 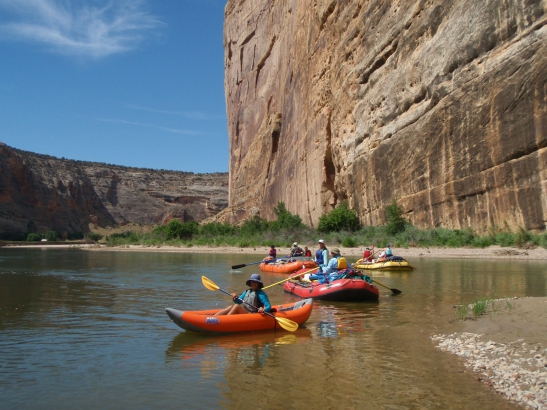 We also managed to be spontaneous, although this is always more of my goal than my wife’s. In fact, we were so spontaneous that we “ate” the reservation fee for three different campgrounds where we didn’t end up staying when our plans changed. But the revision to our plans worked out fine. We stumbled onto an amazing lakeside fireworks display in Cascade, Idaho. Listened to a high school marching band serenade us in Jackson, Wyoming. And scored tickets to an Ed Sheeran concert in Sacramento from one of the couples we were rafting with who couldn’t use them.

As for closeness, forced and otherwise. We lived in a van, traveled in a sixteen-foot raft, slept five in a four-man tent. We were close. When the trip ended and we came home, the kids went to their own far-flung rooms to live their own lives and my wife and I fell back into our routines. The sudden distance reminded me how close we were on the trip, which doesn’t mean we were always happy, or always kind; it means we were always close. 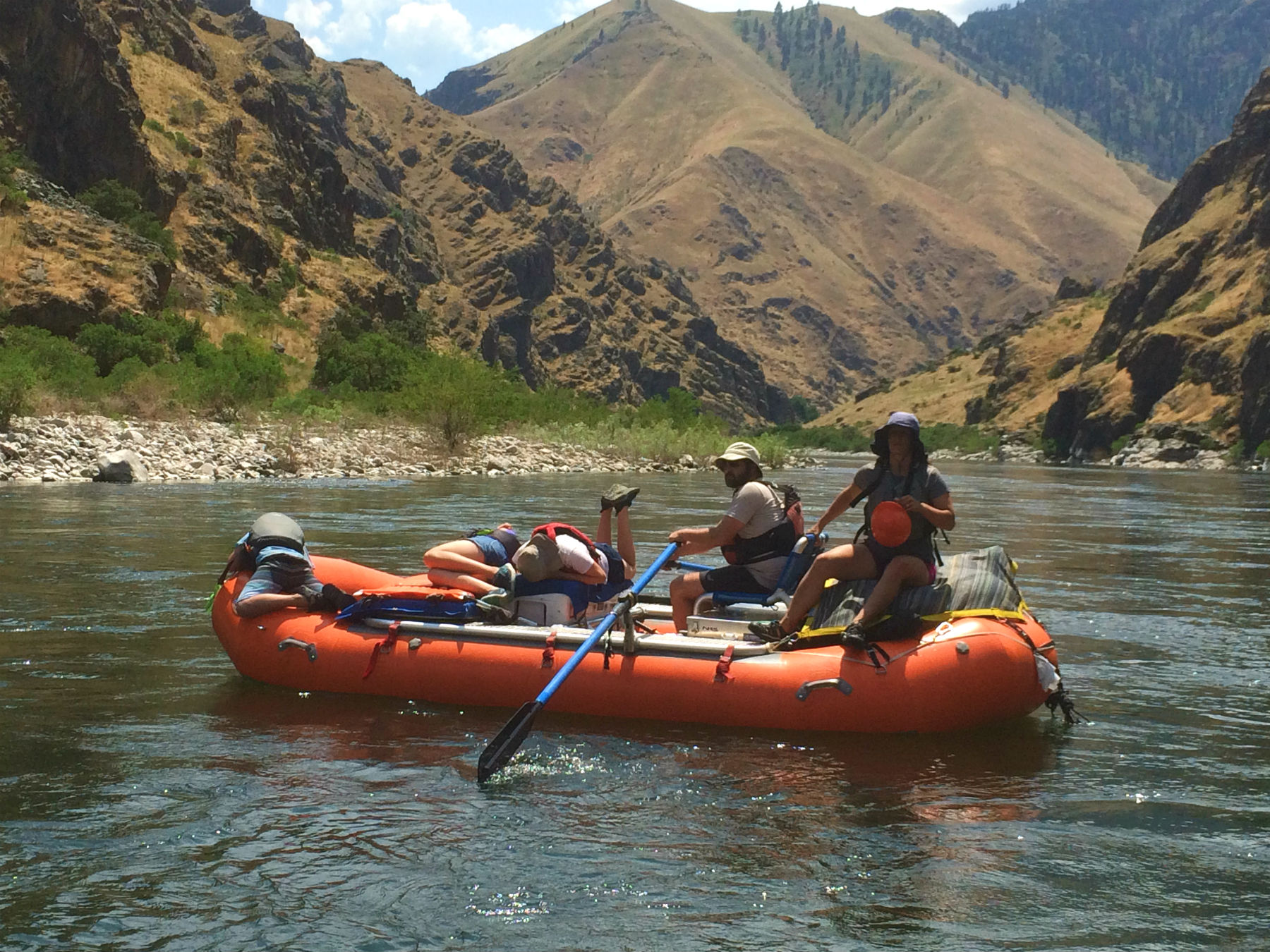 Vacations always seem to develop a theme. And between the triple-digit temperatures, our children’s real and imagined suffering and the places we traveled, our theme, we joked, was hell, which fits because as Mark Twain once said, “you go to heaven for the climate, but you go to hell for the company.”