For years, the Stikine River, located in Northern British Columbia near Dease Lake, has been the pinnacle of expedition kayaking and big water. In recent years, it has seen exponential growth in the number of paddlers charging into the canyon. Not only are more crews making full descents, they’re attempting descents at higher flows and turning the typical once-a-year multi-day trip into multiple laps within a season. In the last few seasons, Aniol Serrasolses and Benny Marr have become masters of the river, doing a whopping 20 laps in the last two years, including resetting the speed records and pulling off back-to-back laps in a single day.

The characteristics of the Stikine and all of her rapids have been well documented. Famous rapids like Three Goats, Pass/Fail, Wasson’s Hole, Site Zed, The Hole that Ate Chicago, V-Drive, and Tanzilla Slot are known throughout the kayaking community. While I could easily dive deep into the technicalities of every rapid and the moves necessary for success on the river, I’d rather share the experience of this river and why it’s held so dear in so many class V kayakers’ hearts. Not every kayaker will paddle the Stikine, and nor should they. The Stikine is for confident, experienced, and strong class V paddlers and should be respected in every way possible.

It hasn’t been that long since I first paddled the Stikine. Day one of our two-day trip was August 9, 2017—I’ll never forget that day. I grew up in Idaho and started developing the skills necessary for big water runs (like the Stikine) when I was ten. That’s when I started paddling the North Fork of the Payette. I’m lucky to be able to call the North Fork my home run. I owe my love and desire for big water to that river.

When preparing for a first descent of the Stikine in the late 80’s, Rob Lesser used the North Fork as his training ground as well. Many of my dad’s paddling friends were part of that early-ish group to take on Northern B.C.’s favorite wilderness run. And although my dad didn’t get the chance to go up himself, I grew up tagging along with dad and his paddling buddies and listening to their tales. I learned a lot standing in the parking lot in Banks, Idaho taking in all of the stories and beta each weekend throughout the summers.

And then, in 2017 after a rally from Upper Cherry in California—50 hours driving to the Stikine—I got two laps on the Stikine. The first lap happened over a two-day and the second in a single-day slog. That’s all it took to hook me. I didn’t even mind the 50-hour return trip to California (where we immediately hopped on the Middle Kings). 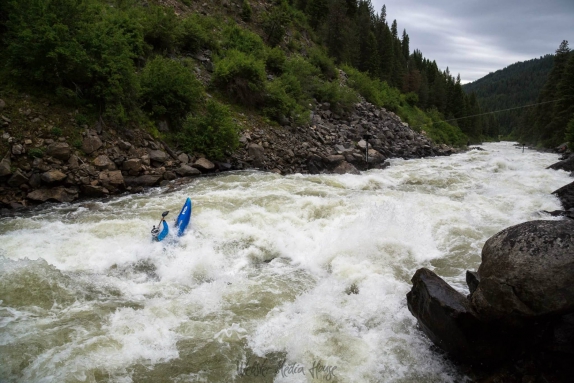 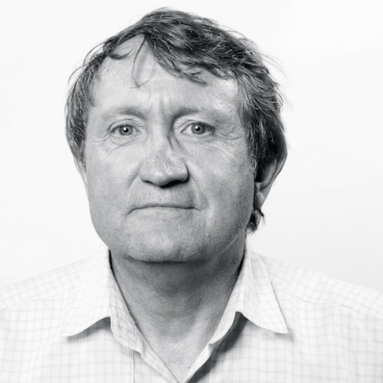 Rob Lesser, trip leader on a five-man crew for the first descent of the Stikine.

I didn’t have a lot of predetermined places in mind this past spring as I was tentatively planning my year, but my number one, must-hit destination was Dease Lake. I wanted to spend as much time and get in as many laps as possible on the Stikine.

Typically, the Stikine starts flowing around early-mid August. So the original plan was to spend a month in Norway, return on the second of August and head straight to the Stikine. But with a combination of one of Norway’s driest summers on record and the Stikine’s weak snowpack, I chose to end the Norway trip a little early, so I could rally with my crew to paddle one of our favorite rivers. The fact that the river flows were ideal in July is unheard of. It would prove to be a great decision, and lead to an epic two weeks filled with eight laps.

The Stikine’s whitewater alone is very unique, combing about 15,000 cfs and a canyon that often narrows down to only 20 yards wide. This results in huge boils, dynamic eddy lines, powerful crashing waves, and huge holes, all which need to avoided—just how I like it. From the put in, it takes about 40 minutes before facing the first major rapid, Entrance Falls. From there, it’s another 40 minutes before the real goods start!

Like a vivid dream just the night before, I remember my first time dropping into Entrance last year—all the stories, all the hype, all the anticipation. It all leads to a certain anxiousness and nervousness that puts you on your game. Entering the dramatic canyon is an indescribable feeling, whether you’ve paddled the Stikine once or ten times. After getting to know the river so well, one of my favorite parts has been seeing the faces of first-timers and the excitement of returners, a look with as many similarities as it has differences. 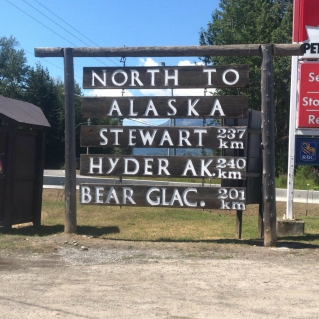 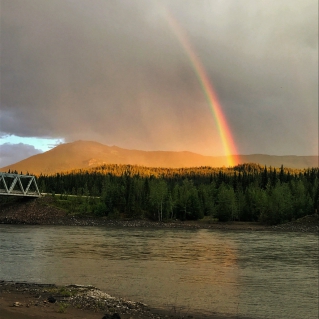 Putting in below Stikine Bridge on Hwy 37. 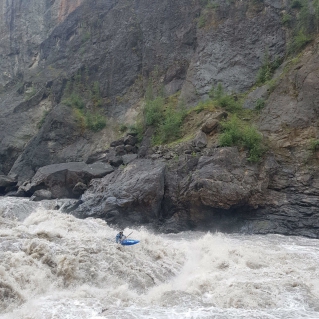 Once paddlers reach Three Goats, that’s where I say the whitewater turns really stout. The canyon deepens and as a paddler, you feel completely locked in; it’s a very dramatic feeling. The rapids are stacked and the farther you go, the more remote and isolated the river becomes.

For quite a few groups, the river is done in three days, which means a couple hours of paddling (including some good rapids like Entrance, Wicked Wanda, Three Goats, Pass/Fail/ Wasson’s, and some good boogey) before camping just above Site Zed. I personally haven’t camped at the Zed camp since I’ve always done one or two days on the river, but it’s an epic spot. I would usually go past Site Zed about an hour and a half or two, charging The Wall, and Garden of the Gods I, and camp once the river opens up at an epic beach site called Wolf Tracks. Wolf Tracks is also ideal in case of bad weather because just up the hill is a huge overhanging rock that provides a natural shelter from rain, wind—snow.

One major benefit of the big water on the Stikine—other than the thrill, of course—is the fact that unlike most multi-day runs where you’re counting ounces and eating freeze-dried, weight doesn’t matter on the Stikine. Having some weight in the back of your boat actually helps in the powerful and dense nature of the rapids, which makes it a lot less stressful than Cali overnighters, for example, where weight is always on the back of my mind because of the hike-ins.

Here, I can load up as much as I want, and it doesn’t really affect how my boat paddles. On my last lap, we had a merging of groups, making a solid crew of 14 people camped at Wolf Tracks. I decided to go all out on food and I brought the makings for campfire poutine cooked in tinfoil plus a bunch of cookie dough to share with the group for dessert.

This early-season special meant the weather was beyond epic. Before climate change was hitting us in the face, kayakers paddled the Stikine much later in the year, the snowpack holding strong until late September. On top of that, paddlers’ skill levels have evolved to the point that the river can be paddled at a much higher level. Putting those two factors together equals an earlier Stikine season. Out of the two weeks I spent up north, one presented bluebird skies and temperatures over 90 degrees Fahrenheit. The water is actually quite warm as well, so sweating in my drysuit was a common occurrence, but I’ll take that as opposed to being too cold! 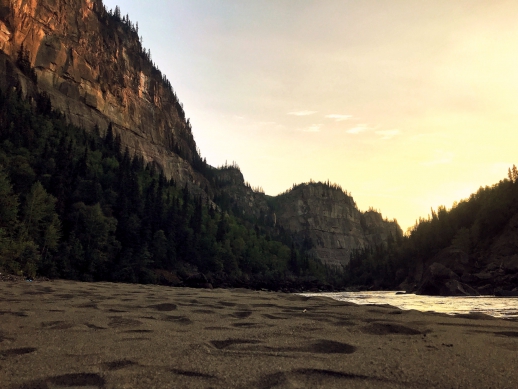 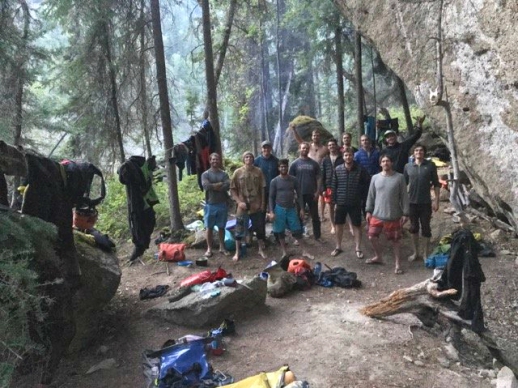 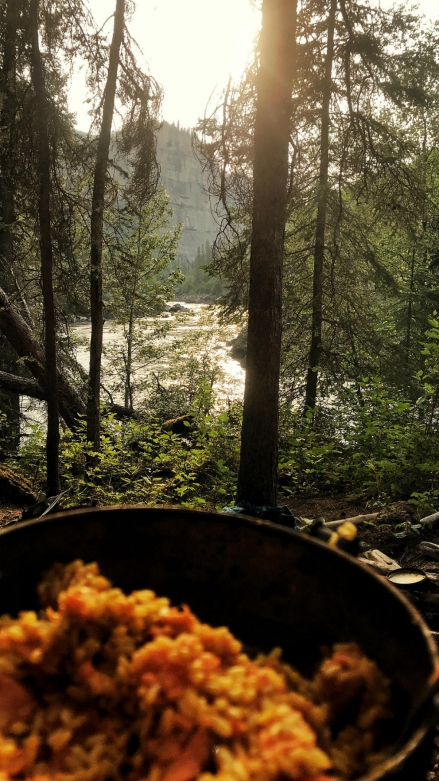 Wolf Tracks to the takeout involves the last canyon: Garden of the Gods II. This section is super continuous, making a swim or a lost paddle very, very dangerous. Going into this sequence always gets me excited but it’s critical to stay focused to avoid something stupid. My mantra throughout the entire Stikine lap, “If I flip, HOLD ON TO MY PADDLE,” is especially important in this section. It’s the most stacked section of kick-your-ass rapids featuring the famous, Tanzilla Slot, Rowdy Flatwater, Wall II, Scissors, Hole that Ate Chicago, and V-Drive. Then the river mellows out for the last two hours. Easing into Class III before completely dying down to moving flatwater.

But the flatwater isn’t as banal as it sounds. Let’s not forget, you’re still in Northern British Columbia and in this last section, you can spot a ton of wildlife. In general, some people have a better eye for seeing wildlife than others. I tend to lean toward the side of missing everything, but that’s mostly because I hammer out the paddle out, always keen to get to the takeout. If you chill and keep your eyes peeled, mountain goats, osprey, bald eagles, and golden eagles are everywhere. It wouldn’t be completely crazy to see 50 mountain goats scattered amidst the cliffs in the canyon during the paddle out.

The annual Stikine Season at the end of the summer and the early fall is a time of the year I don’t think I will ever miss. The best big water, epic scenery and wildlife, coupled with great campsites, and the best feeling of living out of my kayak will keep me coming back year after year. Now that I’ve gotten the chance to paddle the river so many times, being able to take first timers down and re-seeing the stoke and excitement really helps keep it in perspective. I can’t think of a better way to spend my time than taking eight laps down this amazing river in two weeks. 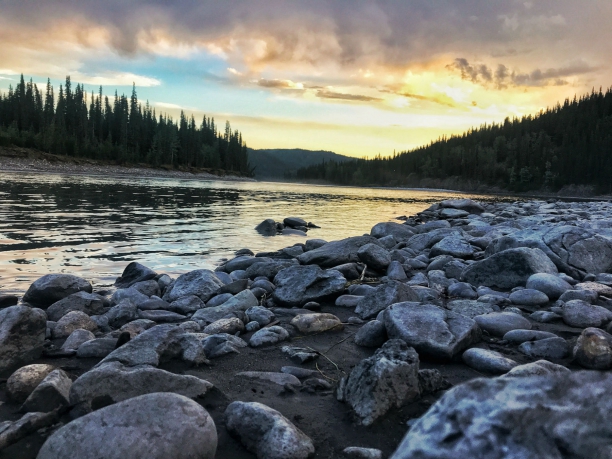 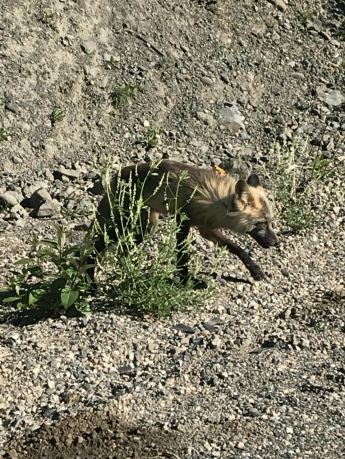